How I came to love Winter

Growing up, my family packed ourselves into Dad's pickup truck every year on December 26th and trailered the snowmobiles seven hours north to explore the woods of Northern Wisconsin. Too young to drive my own sled, I rode in front of my dad on those all day-into-night excursions through the woods, stopping at multiple bars and restaurants along the way to warm up. Hot cocoa with unlimited whipped cream for us kids, and "hot toddies" for the adults.

I didn't know what a hot toddie was back then - I just liked the name. And that they resulted in an infinite supply of quarters to play Pac-Man, Astroids and shoot pool with the other snowmobiling kids while the adults downed them.

Now a snowmobile owner myself, I tongue-lashed my parents for their lack of safety and concern for our general well-being on those trips. Hot toddies, then maneuvering 500 pound machines over frozen lakes at speeds well over 60 miles per hour? Shame on you, Arlene and Jack.

But thank you, too, for showing me the way to a good time in the Winter. Now I just modify the behavior by imbibing on the toddies post outdoor fun.

They also took us downhill skiing once or twice, equipped with infinite patience to teach Brother and me how to make our way down the slopes without breaking limbs. So in 1981 when Snowstar Ski Area opened a mere 15 minutes away from our home, we were hooked. After a few years of rentals resulting in an unlucky trip to the ER with a bloodied head by yours truly, Mom and Pops generously gifted us with our own sets of skis, boots and poles so we could ski every Saturday at a reduced price. On quality equipment that wouldn't fall off and gash heads. Swear. It really was the equipment's fault.

Now the parents of teenagers, I know what they were up to. A full weekend day without kids? Book it.

But I loved it. My friend Michelle and I were permanent fixtures at that ski hill twenty-five years ago. Every single Saturday found us carpooling to the mighty hills of Andalusia, grooving down the runs to music from 97X blaring on the speakers as we made our way to the chairlift, singing and bopping our heads along to the beat. Of course, in our infinite wisdom, we awoke at 8:00 those days to tightly curl our mullet-styled hair with hot rollers so we could look sharp on the hills. I was nicknamed "Bluey" by some of the other skiers based on the trademark blue-green fleece that I donned on the slopes. It was completely inappropriate attire for extended activity in sub-freezing temperatures, but looking good was a top priority, darnit.

We had a blast. We made it our mission to quickly pick out the best looking boys from town and strategically time our downhill descent to ride the chairlift with them. A successful day resulted in a dinner date at the lodge. Going dutch, naturally.

Recently my beloved Michelle made her way out to Snowstar after a twenty year hiatus. Once I spied the pictures and heard about the fun her family had that day, I insisted that we relive our teen years together. Sadly, a family medical emergency prevented her from joining us Saturday (thank goodness her son is going to be OK though), so I asked my mom to rally her family members so we could get a group together.

"Snowstar Winter Park," as it's now called, added this tubing hill in 1997. 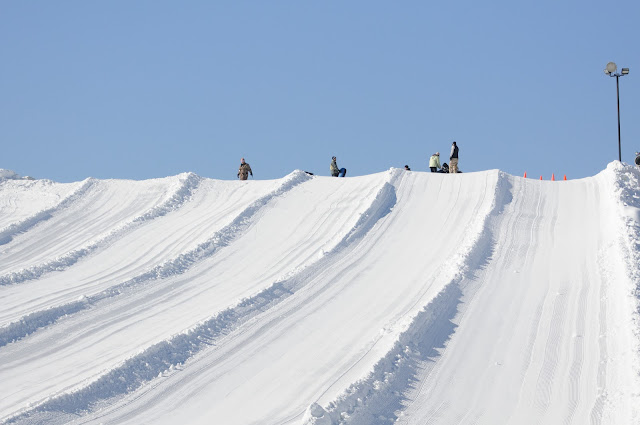 Complete with five working chutes, a vertical drop of 68 feet and a "Magic Carpet" to swiftly move tubers back to the top of the hill, this is another way to have a blast outside in the winter months. 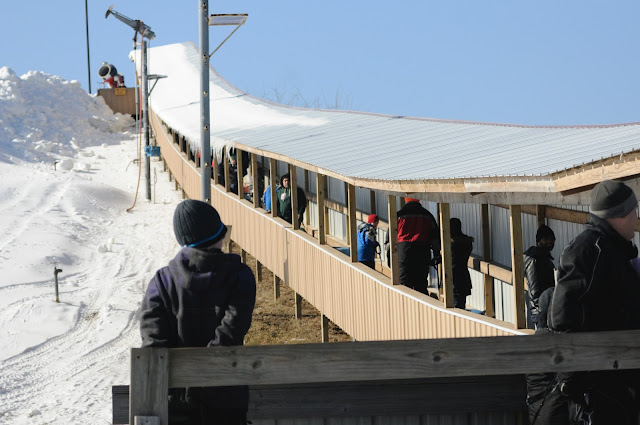 The rules are few, but my eldest successfully broke them all. I confiscated her scarf and told her to zip up, but there wasn't much I could do about the hair. Rebel. 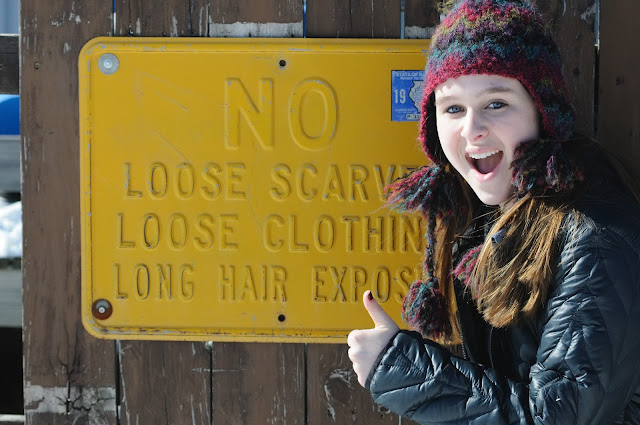 Mr. Musky was sunning his buns in Palm Springs over the weekend, so he missed out on some great fun. His absence didn't stop us though. Who needs bright sunshine, 75 degrees, swimming pools and palm trees? Racing down a slippery sheet of snow-packed ice is much more thrilling. Ask Jake and my cousin, Mike. 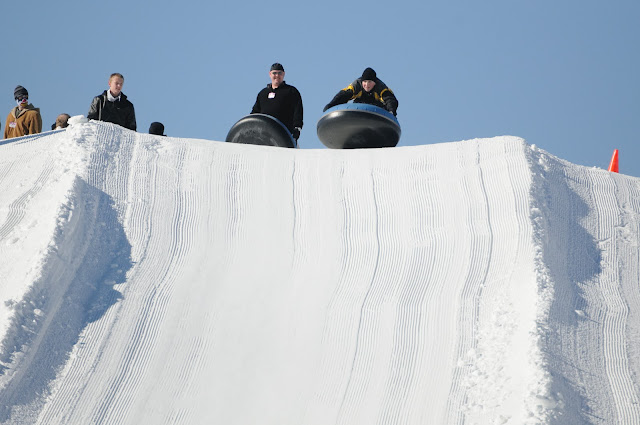 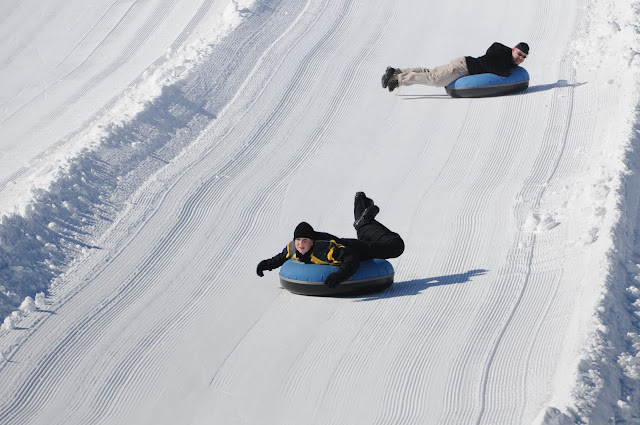 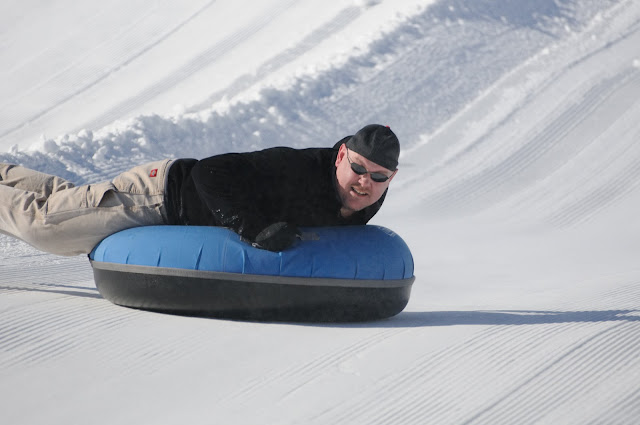 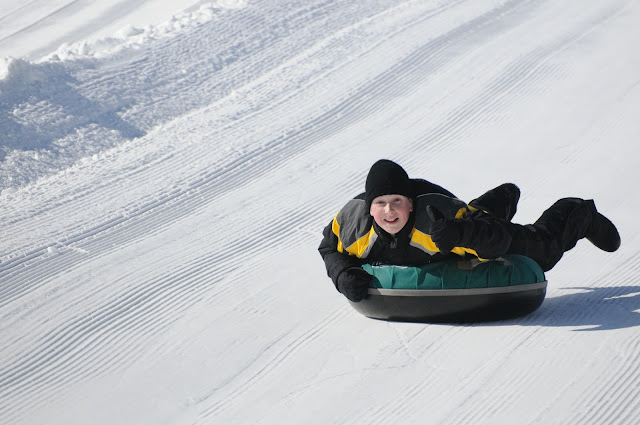 Poser, giving me a thumbs up.

Karlee tubed here before and showed us the ropes. Like tying the tubes together to go faster and get better spin, if you sweet talk the workers the right way. 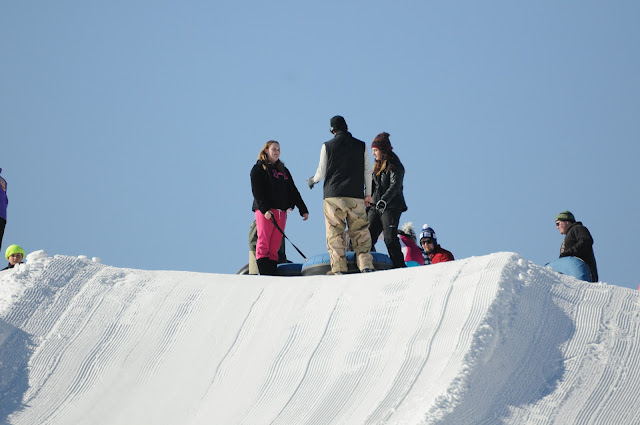 Bribery with hot cocoa and flirting also works, as the girls quickly assessed. Zach accommodated them with a killer spinning technique to send them sailing down the chute. 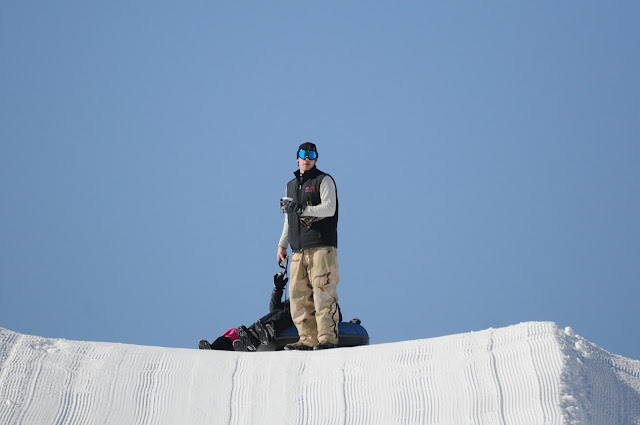 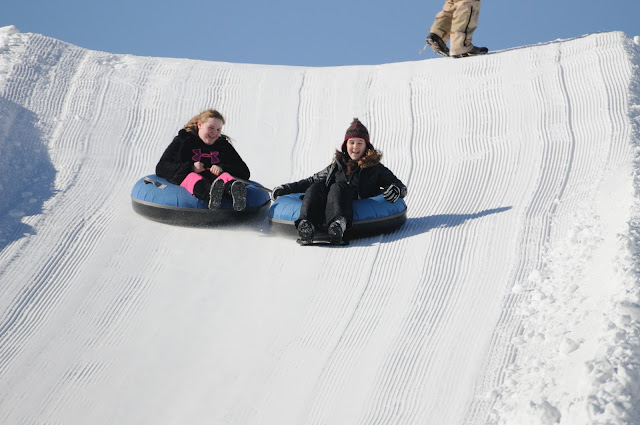 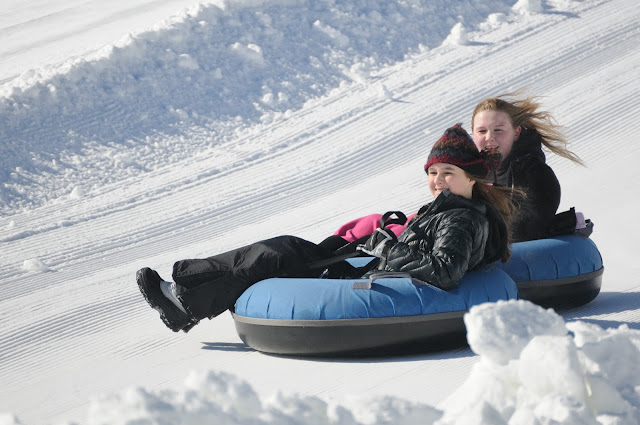 This was a most excellent way to spend Saturday morning with some family members that we don't see often enough. 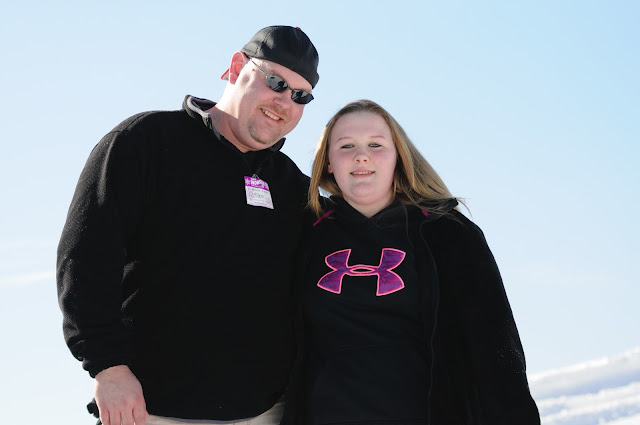 And we decided that we're definitely going to have to fix that by scheduling another tubing outing with even more family and friends to join in on the fun. 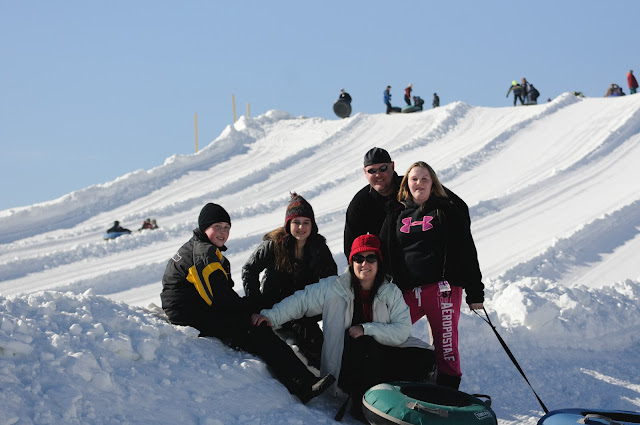 If you ever get a chance to do this, go for it. I highly recommend it. 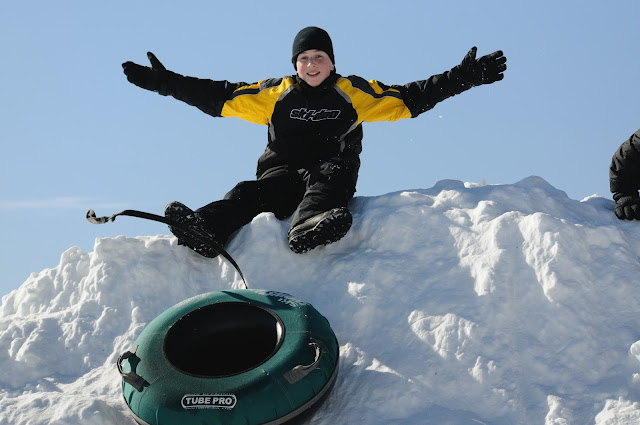 Just don't slide down on your butt. 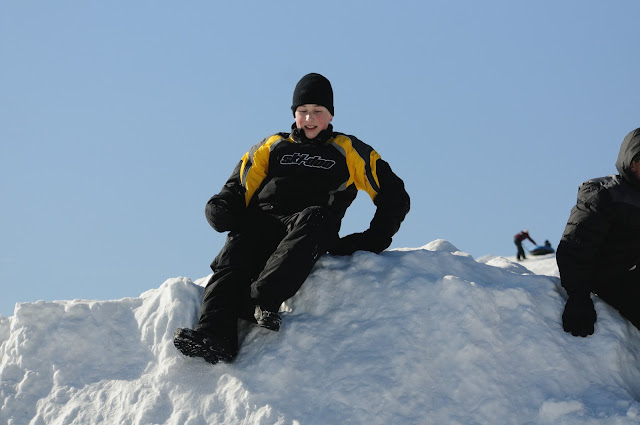 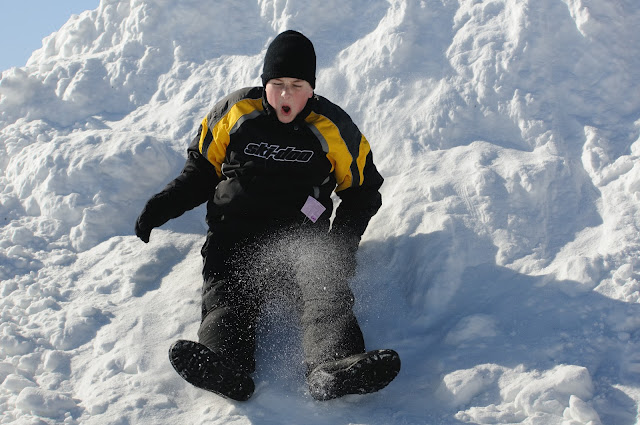 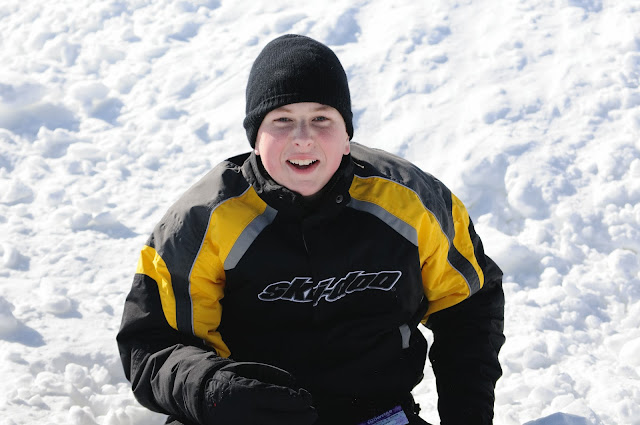 Here's a short video of a ride down when we were all tied together. Yes, I freaked out because the barrier at the end was deflated, but Zach showed no mercy.
XOXO,
Jen

We tried out a new sledding destination this year with our friends.

And we will surely be back.

Maybe even for Girls Weekend, as Carrie demonstrated the perfect sledding form and proved that even adults can act like goofy kids.

But with adult beverages to warm up.

We'll opt out of the painful landing on the frozen pond that Rich so eloquently performed.

I prefer my hat on my head, thank you very much.

And Jake. Thank goodness for Dad hats that dry up the beginnings of frostbite.

We enjoyed our ride through the woods...again...

...and the hot cocoa fire did its job as nightfall crept in.

Our New Year's Eve traditions will never grow old for me, despite questions from my offspring asking if we might be able to try something new next year? 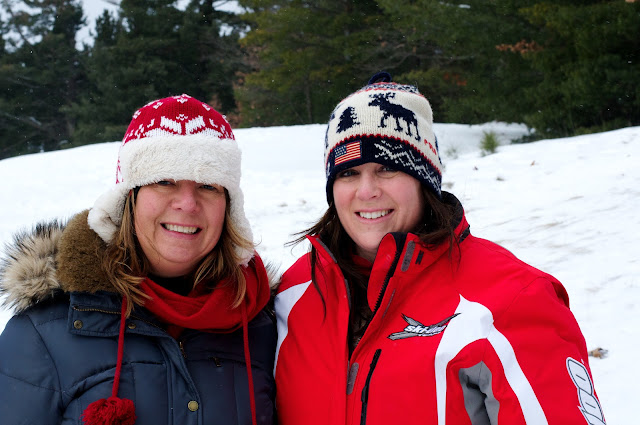 Lord only knows. I can hardly wait.

Posted by Jen Czupek at 6:25 PM No comments: