Today's Letter to the Kids at Summer Camp

Every day I write the kids a letter while they are at summer camp. Sometimes they are rather mundane, but on other days, quite shocking and exciting. Today's letter went something like this:

You're never going to believe this one...

Last night, it was a bit warm and humid and I didn't sleep well. Neither did Dad. We got up around 3:30 for a drink of water, then settled back in bed to try to get a few more hours of sleep. Just as I dozed off, I heard a little rustle at the window behind our heads. I ignored it, but heard it again a few seconds later. I stayed really still, with my eyes closed, willing it to go away. I sensed that Dad heard it too. It happened again. I know it sounds ludicrous, but I actually wondered if a squirrel was sitting on the deck rail, throwing nuts at our screen, just totally messing with us?

When I heard it a fourth time, I finally spoke up. "What is that?"

As he rolled over to switch on his bedside lamp, Dad replied, "I don't know. It's not a bat, is it?" The light illuminated a flurry across the opposite wall. "HOLY $#IT! IT IS A BAT!" and he scrambled faster than a cheetah out of the room. Seriously.

Meanwhile, your very brave mother whimpered under the covers. "Make it go away. Make it go away." I regressed decades in those seconds, like a child, pretending that if I hid under the sheet, all the scary stuff would leave my room.

Hearing my plea, Dad hollered, "Where are you? Where'd you go?"

He mistakenly thought I sprinted out of the bedroom too. "I'm under the sheet! I can still hear it in here with me! Get it out!"

I could tell that he would be no help. You know him - every man for himself and all. So I threw back the covers and bolted for the door, ducking and squawking under the circling bat. It was going nuts in there, madly circling the bedroom, flapping wildly, rustling the curtains, dive-bombing into your Dad's open closet. With relief, I confirmed that my closet was tightly closed and my clothes would remain guano free.

We joined forces in the kitchen, gathering our wits, plotting our next move in Bat Extradition. We knew that at a minimum we had to coax it out of our bedroom. But unlike Grandma and Grandpa's midnight date with the bat in their room a few years ago, we knew we would not swat at it with a broom or a discarded pair of Grandpa's underwear.

Speaking of underwear, your dad looked down and deemed that he was very uncomfortable chasing a bat through the cabin in the nude. But unwilling to venture into the bedroom with that thing exposed, he opted for some dirty clothes in the laundry room.

Thank goodness I hadn't done the laundry that day.

While he dressed, I provided a play-by-play behind the security of the half-closed bathroom door. I figured I could slam the door shut and live out the remainder of the summer in the bathroom should our furry friend decide to leave the bedroom. It was still circling our bedroom wildly, mostly staying toward the top of the ceiling.

An idea occurred to me. Bats being nocturnal creatures, I wondered aloud, "Maybe we need to turn that light off?"

"But it was your idea," he insisted.

Crap. I could see that this would fall into the category of poop and puke. A Mom job. I gulped some large lungfuls of air, held my breath and made a break for it, protesting, "I don't like this, I don't like this!" the entire way. I scrambled in as fast as I could, turned off the light and dashed back.

All on my hands and knees. The bat didn't dip below bed level, so that seemed the safest, most logical approach. Unfortunately, my mad scramble removed the top layer of skin from my knees and the tops of my feet. Rug burns. But...it worked! Mr. Bat chilled out and hung upside down from the ceiling. Next step? Get it out of our room. So Dad googled "how to get rid of a bat" and it suggested opening a door or window, then scraping the bottom of a plastic container opposite the door. I guess Mr. Bat would use sonar to realize sound was not bouncing back from the door, and fly on out? It was worth a shot. Dad stood outside, turned on the outside light, eyes glued to the door, and I sat on the steps to the loft and scraped an empty plastic cup.

Success! Well, partially. The bat left our bedroom and settled in the loft.

Yes, I'm fully aware that's where you kids sleep. But the good news is that you are at summer camp.

We continued trying to coax the bat to the door with the scraping plastic method, to no avail. He would not budge. Dad said he was probably tired, and scared. And we should just go back to bed. Suddenly he had feelings for the poor, widdle biddie bat.

In bed, neither of us slept. Obviously, thanks to the blood sucking mammal upstairs. While tossing and turning we brainstormed:

"Maybe I could just bash it into the wall and kill it."

"Then I'd have to clean up bat blood and guts. No way."

"Well, I'm leaving tomorrow. I guess you'll just have to call a guy to come get rid of it."

"We could try the towel method."

"Yeah, we could do that. But what if it bites us? Or escapes through one end of the towel?"

"We'll have to use the Ov Gloves and your work gloves."

"But what if we use a different container? Do we have a big enough plastic container?"

Fast forward thirty minutes, the sun is rising, and we knew sleep would elude us until we resolved the bat situation. But first, coffee. We needed some stimulation before going into battle.

It was the worst cup of coffee I've ever had. I couldn't stop creeping up the loft stairs to ensure Mr. Bat remained on the slanted wall where we could potentially trap him. We were unsure how to cover the plastic container once we got him trapped inside. A towel would probably work, yes, but we were still concerned about the bat biting one of us. Or escaping before we got the towel in place. I placed my cowboy hat over the container and showed him the alternative.

Dad considered that. "Not a bad idea. I think that could work. But first let me see if I can find a video on capturing a bat. 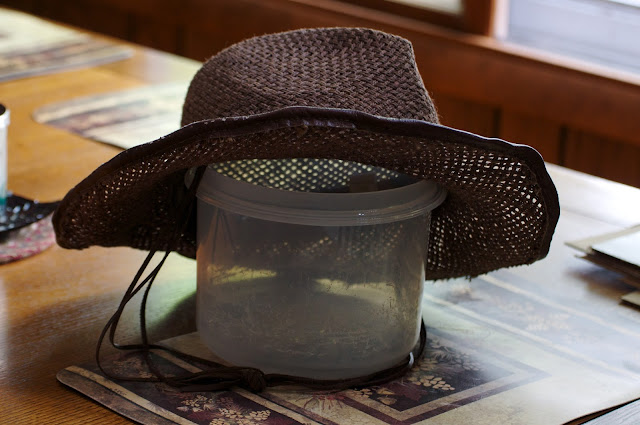 And I must say...Thank you Lord, for creating technology, video, computers, and DSL for the Northwoods. You Tube helped us solidify the plan. Rather than use the hat as a lid, we watched a successful bat capture using the plastic container method with a piece of cardboard to slide over the top. That definitely seemed the best option. But did we even have a piece of cardboard that would work? 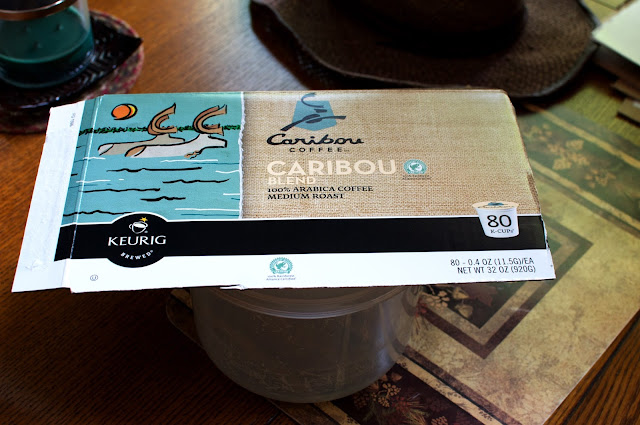 YES! The box of Caribou Coffee K Cups. The Keurig saved the day after all!

We donned protective gloves and quietly ascended the stairs. You know me...I had to get a picture to prove that he really existed, but it was dark, and I was not about to sacrifice my safety or the belfry for the sake of a picture. So this blurry, dark one's all I got. 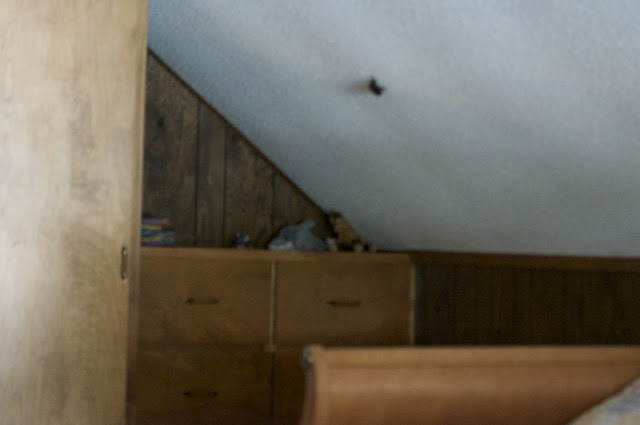 I held the plastic container with both hands, arms fully extended, inching my way along with baby steps. Your dad followed, encouraging my bravery. "Relax - he can sense if your nervous and might attack."

Gee. Thanks for the warm and fuzzies, dear.

"Good job, Bruce. You're approaching the tunnel...that's it...you're in the cave."

I GOT HIM! But it was a bit close for comfort...Dad actually thought I brought the container down on his gut, cutting him in half. But not so! I had him fully trapped and interestingly enough, he didn't even move. So I scraped the bowl along the plaster ceiling, and he finally dropped into the bottom. Dad carefully placed the cardboard over the top as I slowly removed the bowl from the wall, and we had him! 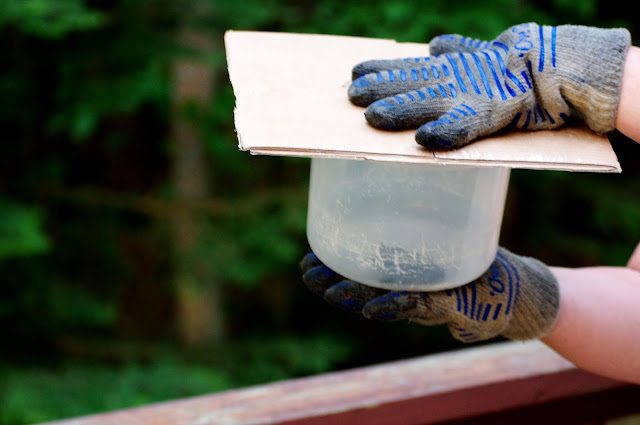 I took him outside (clad in my nightgown, naturally), and removed the cardboard top. Shaking like a leaf, I gently turned the bowl out onto the deck rail outside our bedroom window where all this nonsense originated, ironically enough. Once he hit the open air, he took off to eat seven million mosquitos like a good little bat.

Two hours later, I finally caught my breath. And seriously considered spiking my coffee with Bailey's or Xanax. Or both.

I hope you're having as much fun at camp as we are here! We love you both and miss you tons.