The Miracle Known as Sister-in-Law

Sisters-in-law. They may possibly be the most wondrous creatures God invented. He was on to something - knowing that many of us don't have biological sisters and need Wonder Twin - Activate! powers to keep us sane in our cooky families. Especially those of us who are the babies in families with older brothers. I have two fantastic sisters-in-law, and I love them both dearly. They're kind of like real sisters, but better. Because I didn't have to share the princess title growing up.

When I met my future sister-in-law Jen, she was a pipsqueak. Eight years old. I bought her a wedding themed barbie doll for Christmas that year, except I think it was a knock off. On account of Mattel's prices and my college income not jiving and all. She didn't seem to care, but now I'm second guessing that. The girl's got standards. Regardless, my effort scored me a friend for life.

Given the age gap, Jen and I don't spend nearly enough time together, but the tide is changing. Aging sucks, in some ways. I'm looking at you, sagging parts, grey hairs and failing eyes. But the beautiful thing about getting older is that age differences matter less in relationships. 8 versus 18? That's barbies versus beer guzzling. 18 versus 28? That's beer guzzling and dancing on tables versus a toddler's tantrum away from a nervous breakdown. But now that she's 32 and I'm 42, the gap is narrowing. We're both adults, we both have two mortgages, we both spent considerable time in the corporate world and enjoy some of life's finer items. Wine. Food. Spending time outside on a  beautiful summer day. So when she asked if we were up for a cookout on labor day weekend, I jumped.

It is a treat to be a guest for dinner in someone else's home. It's one of my favorite things in the world, and guess what? I could care less what we eat or drink. Just being invited over to spend time with people we love is the best part. I always offer to bring something along, and Jen requested my Buffalo Salsa Dip that we recreated from a Northwoods restaurant this summer. I'll post the recipe soon, along with a tasty cocktail to accompany it.

Jen loves to entertain, so I'm hopeful we'll be invited back to their hip condo in the city for future dinners. 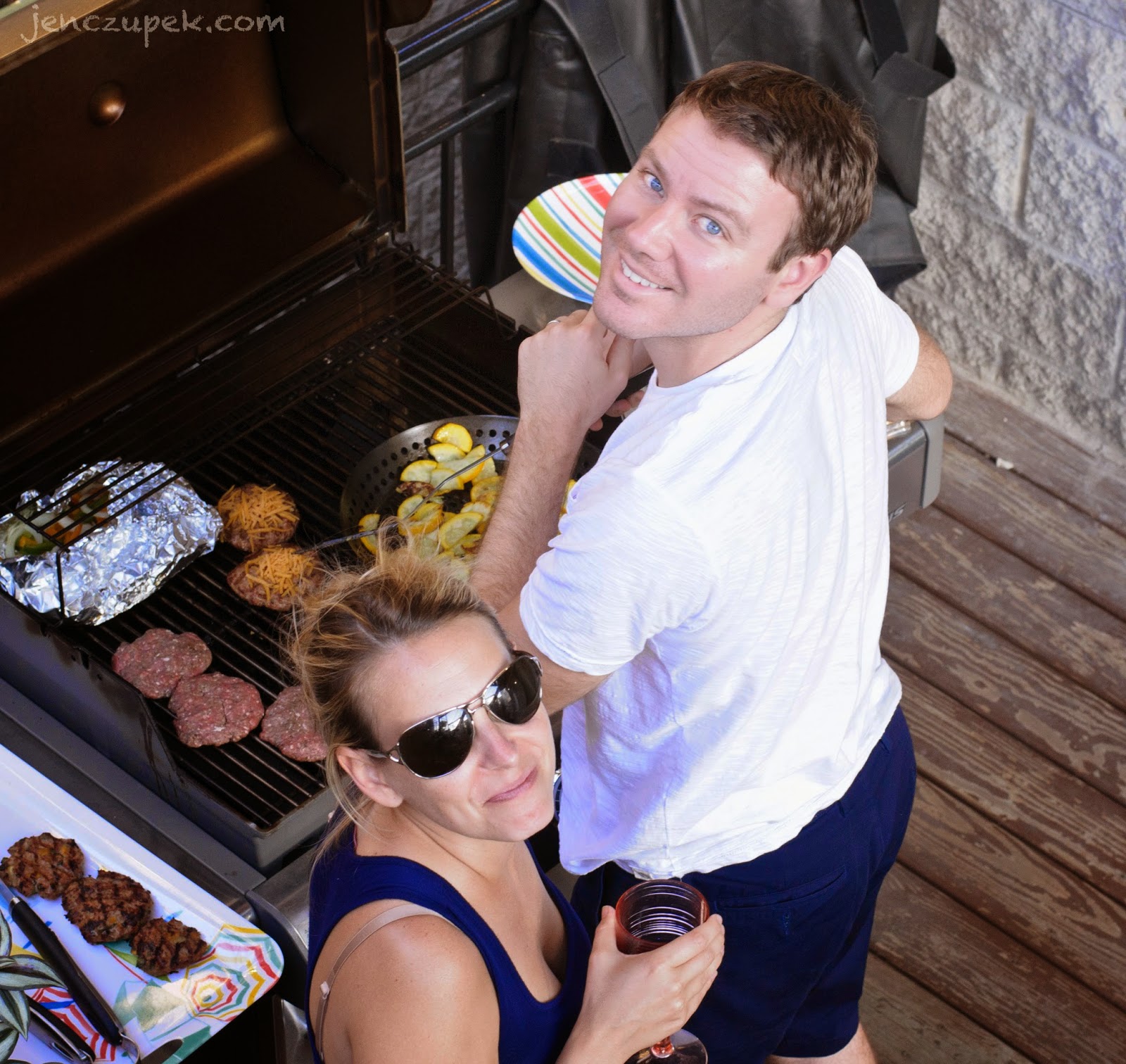 And Pat is the bomb. He is the yin to her yang. Jen can be sensitive, bossy, kind, sassy, sweet, edgy, understanding and demanding all in a matter of 30 seconds. It's what I love about her.

Patrick, somehow, keeps up and balances whatever she dishes out. Watching them is like viewing a modern-day version of the Honeymooners. Minus threats to pow her in the kisser or knock her to the moon. Jen would kill him.

Jake sliced and diced for them, and chatted up Patrick about all matters Star Wars. I guess there's going to be a movie watching marathon in their future. 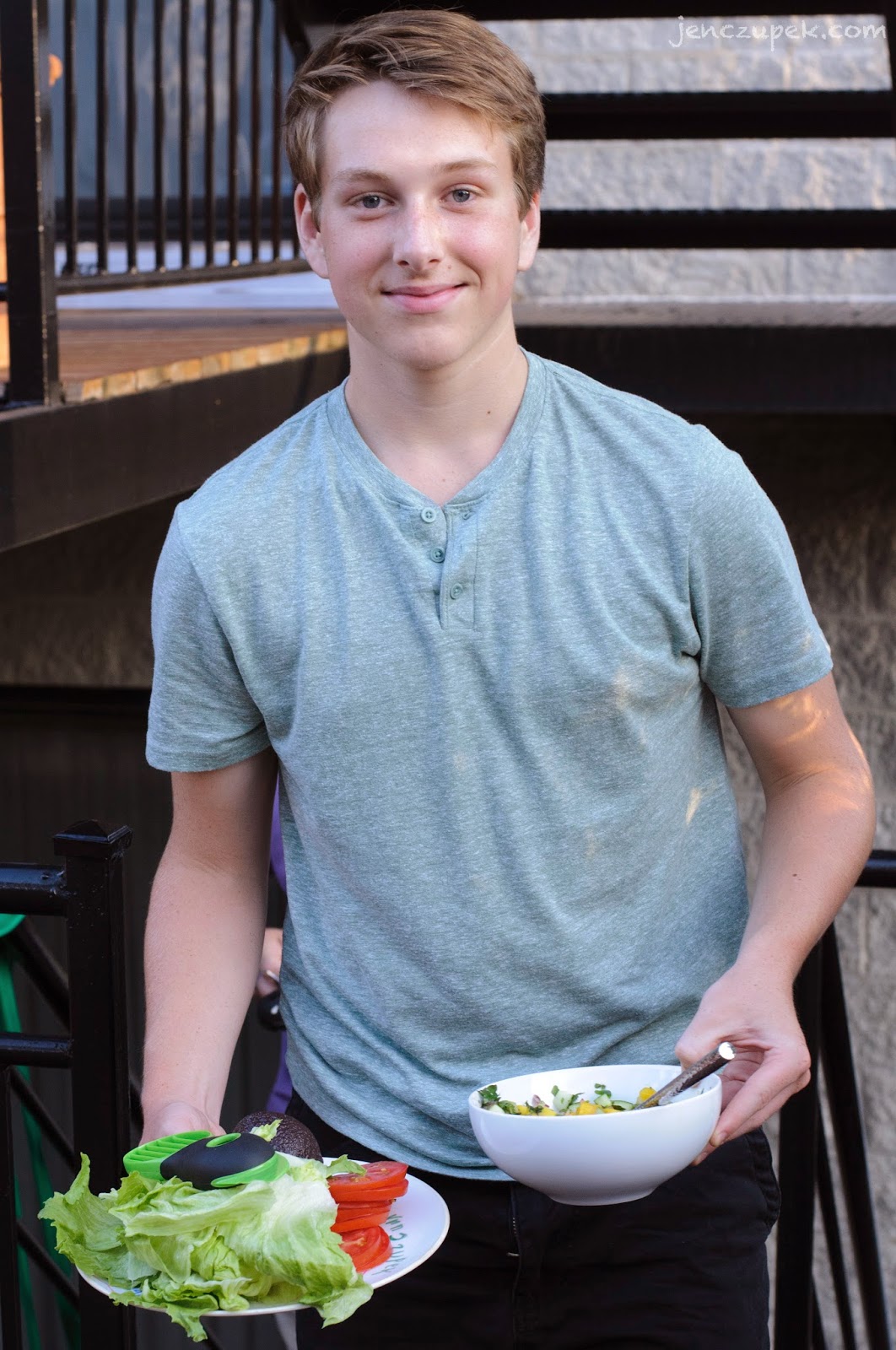 We dined alfresco. My favorite. 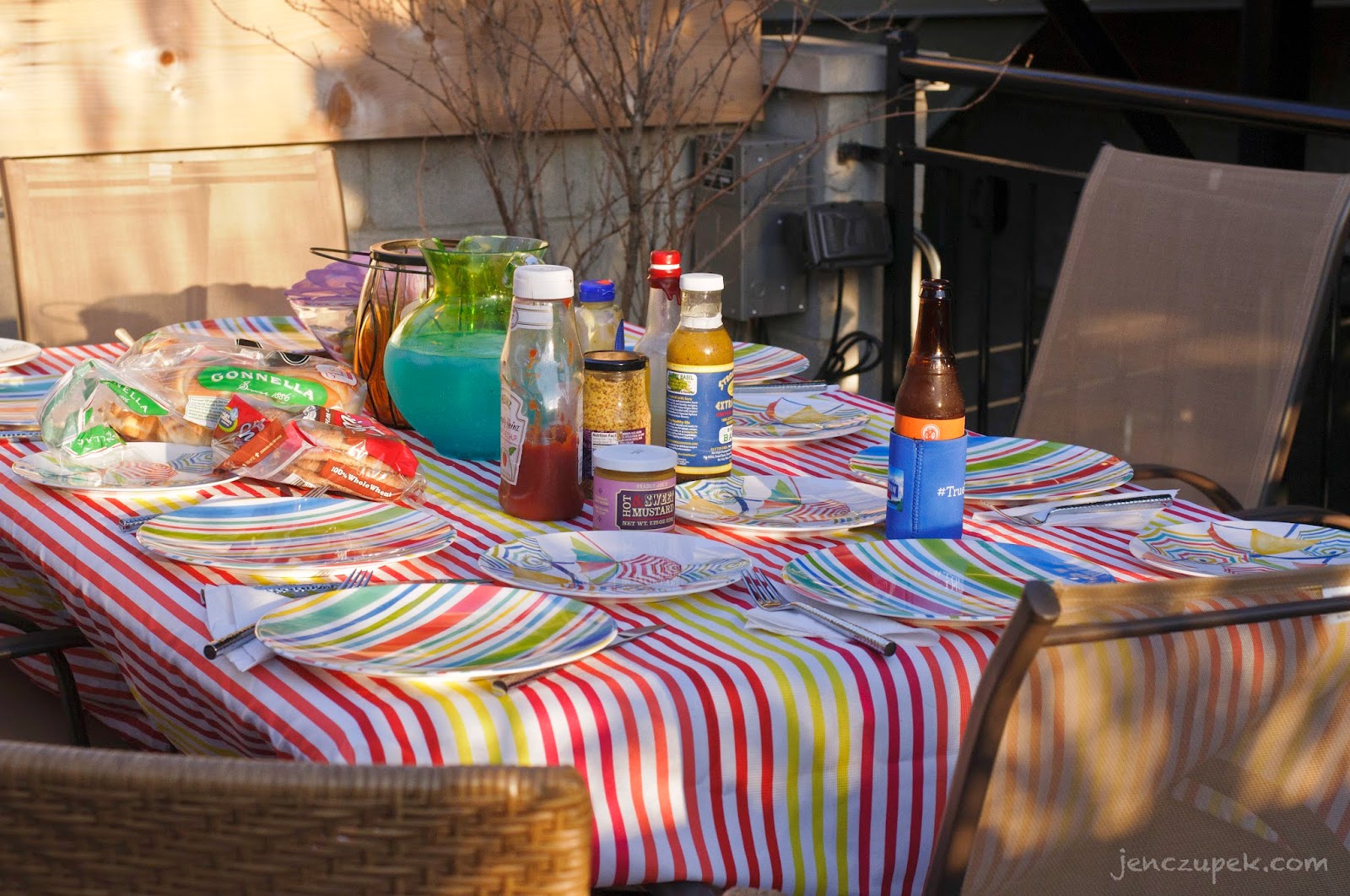 While Jen and Pat cooked up some good grub for us, I dusted off my camera from its summer hiatus and snapped a few of my people. 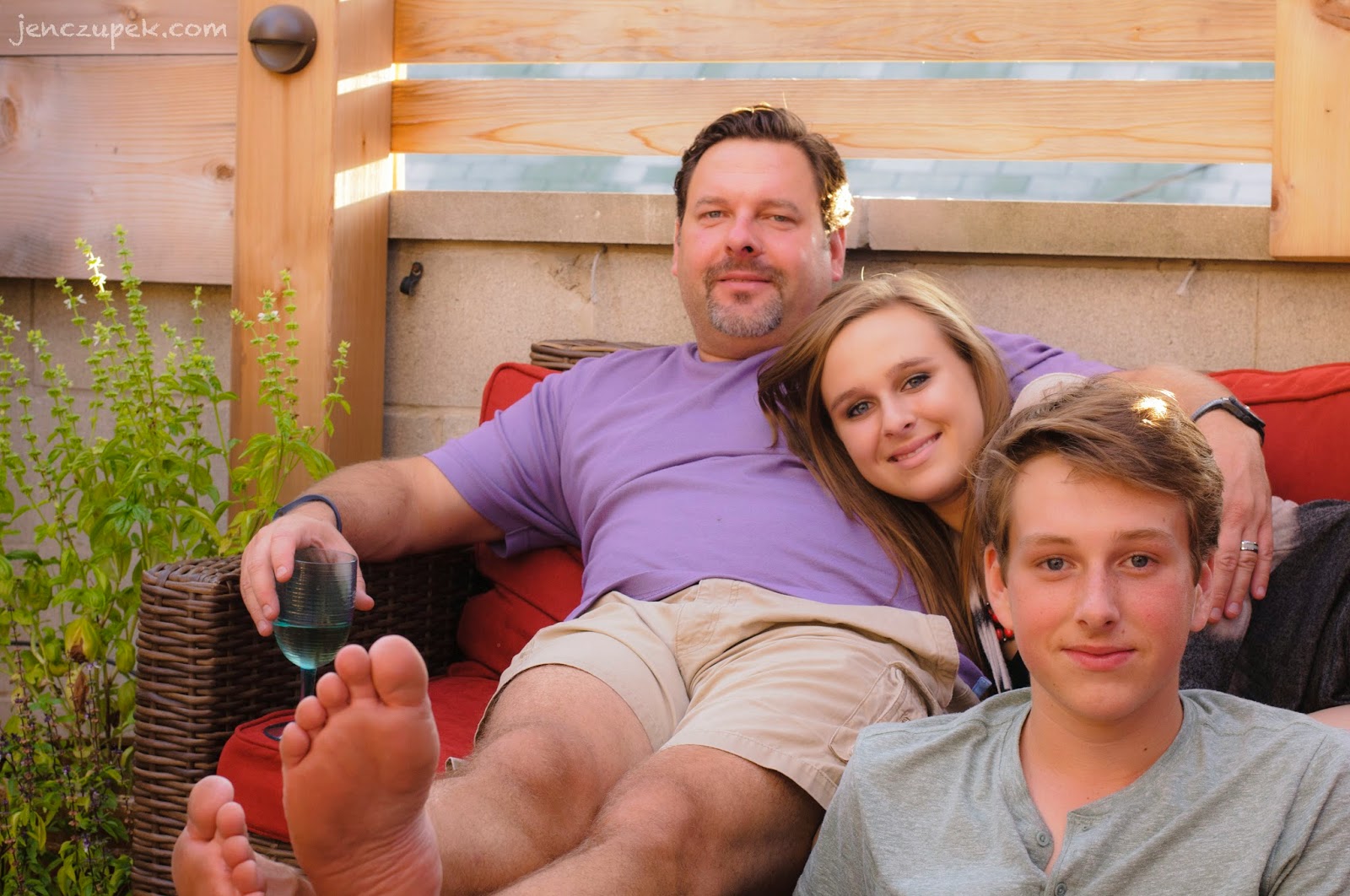 And naturally, things got weird. 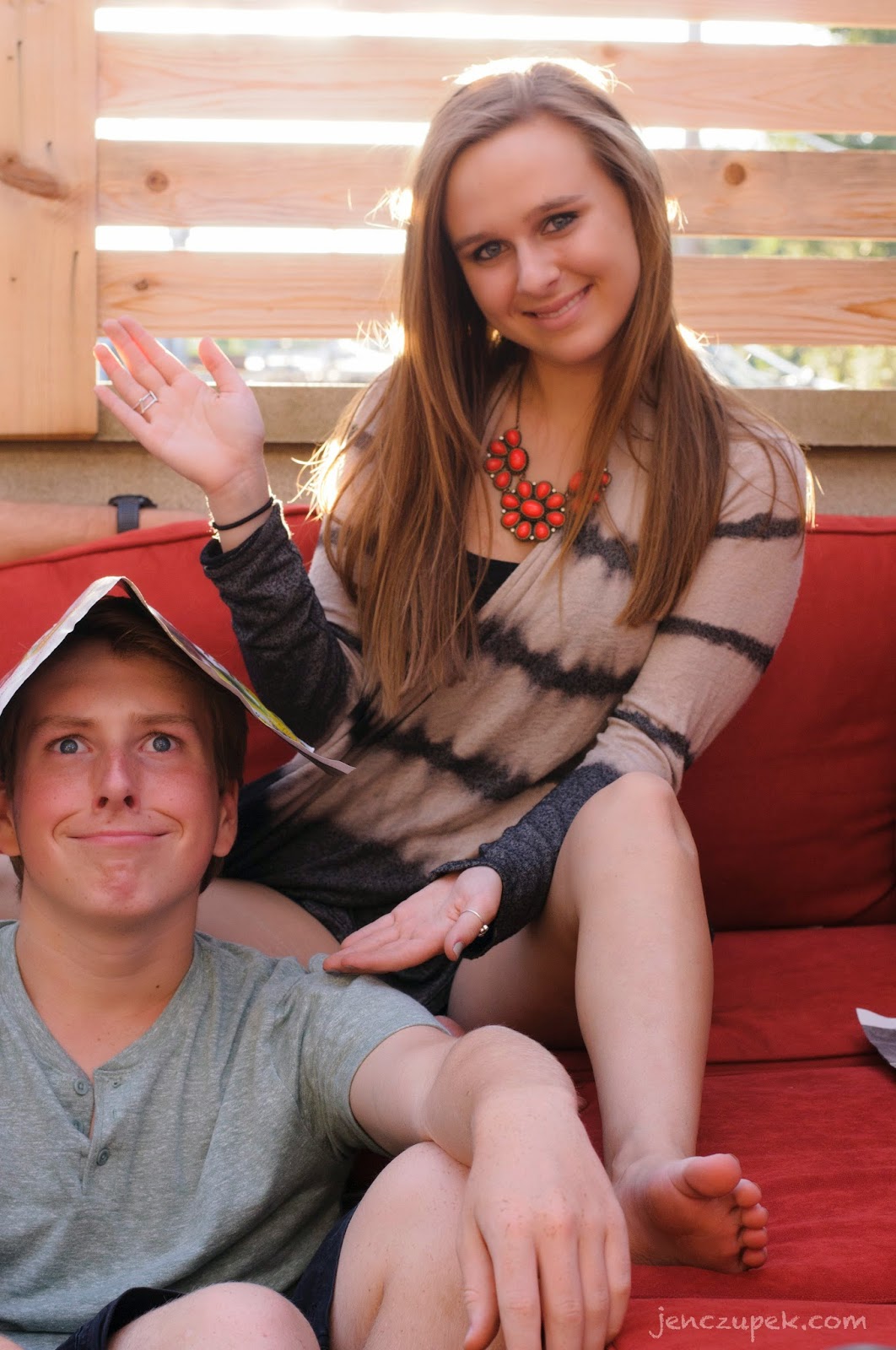 My mother-in-law was in town for a high school reunion, and she joined us for the cookout. 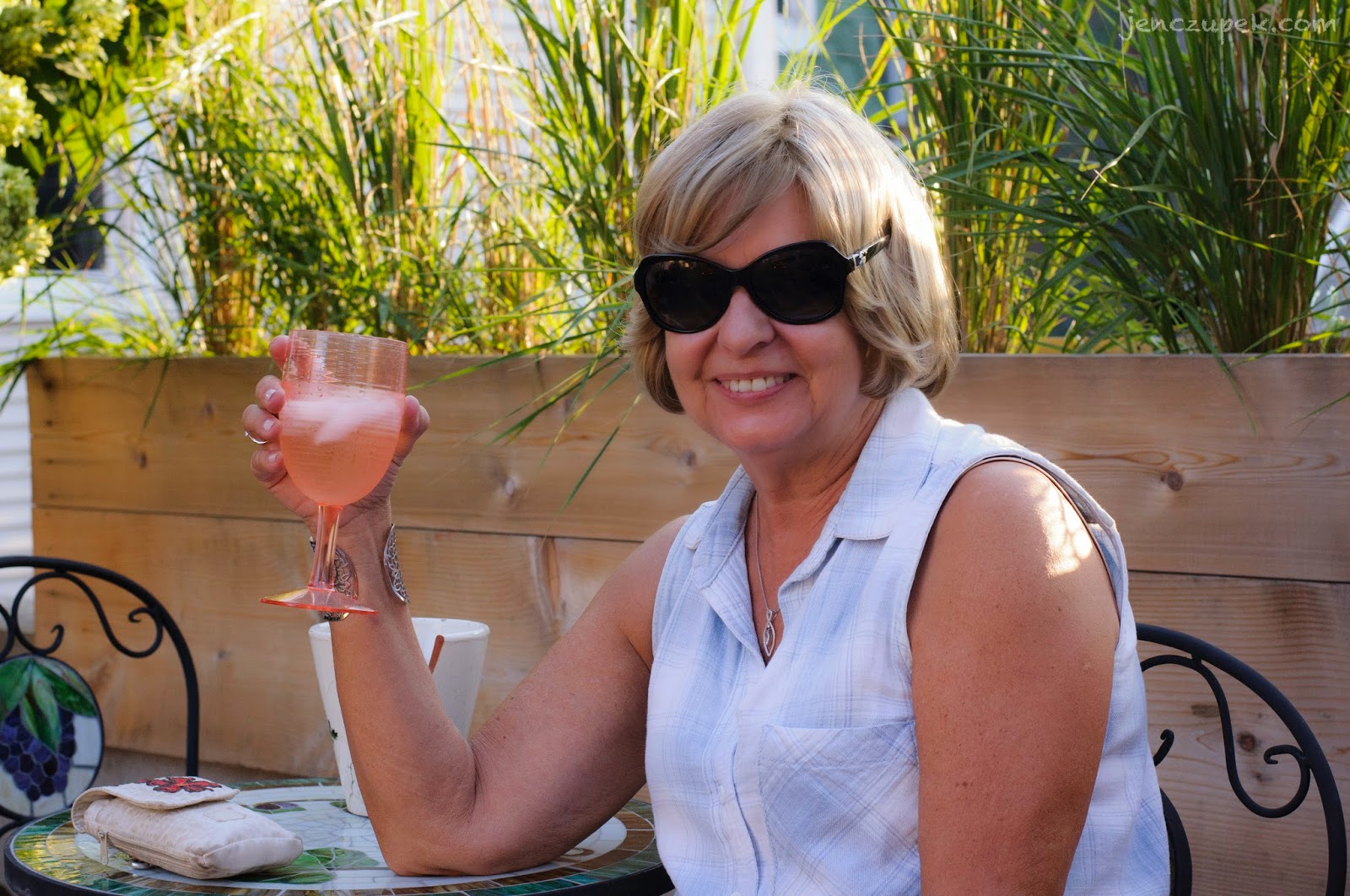 Jen and Pat grilled a variety of burgers. Some spicy, some mild, some with cheese, some plain. There was something for everyone, including an assortment of buns and toppings. For a hot Sunday summer afternoon, there may be no better food out there than a burger extravaganza with grilled vegetables. 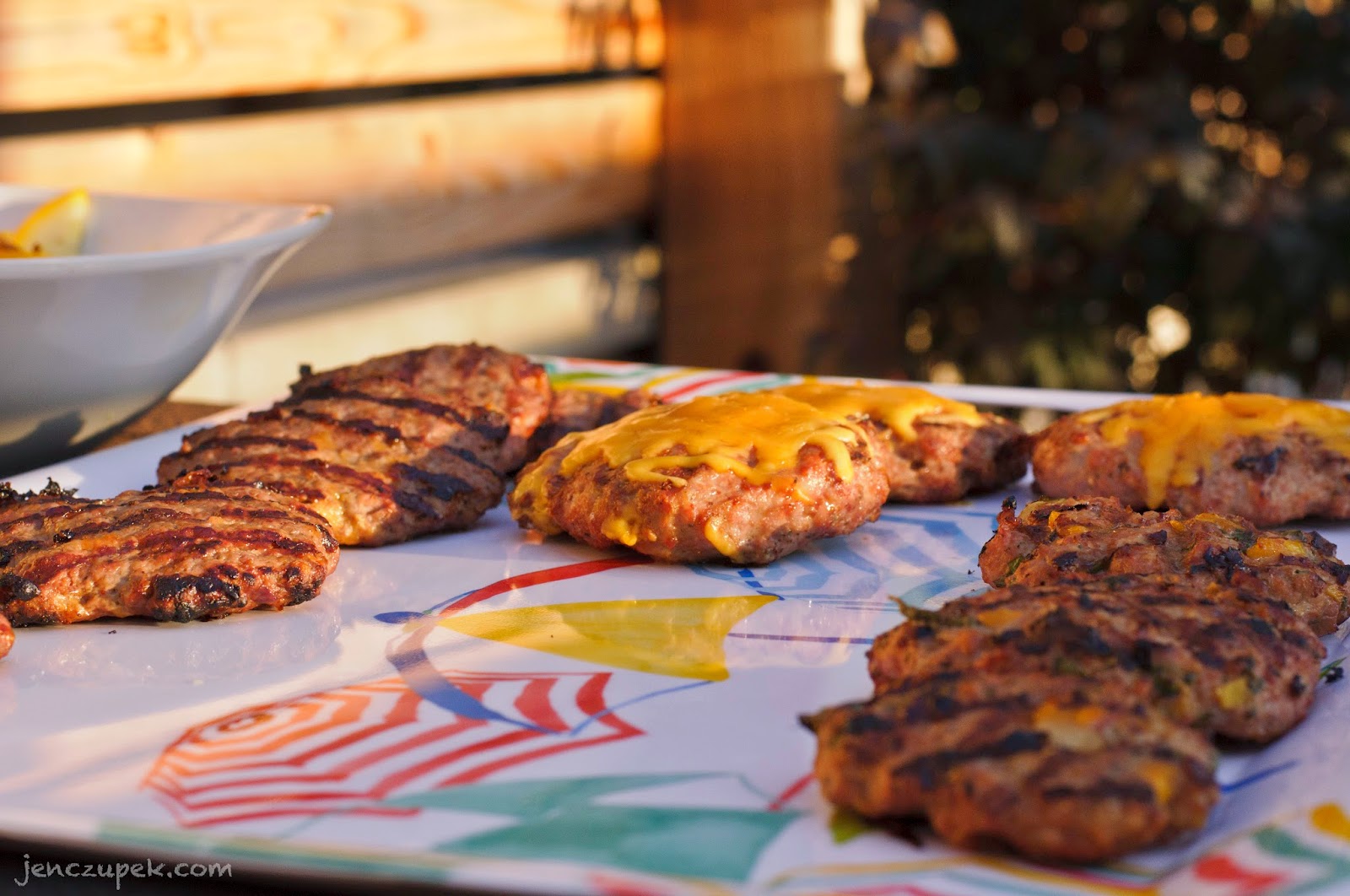 I spied some remnants from their wedding at the end of May, now decorating their urban respite. 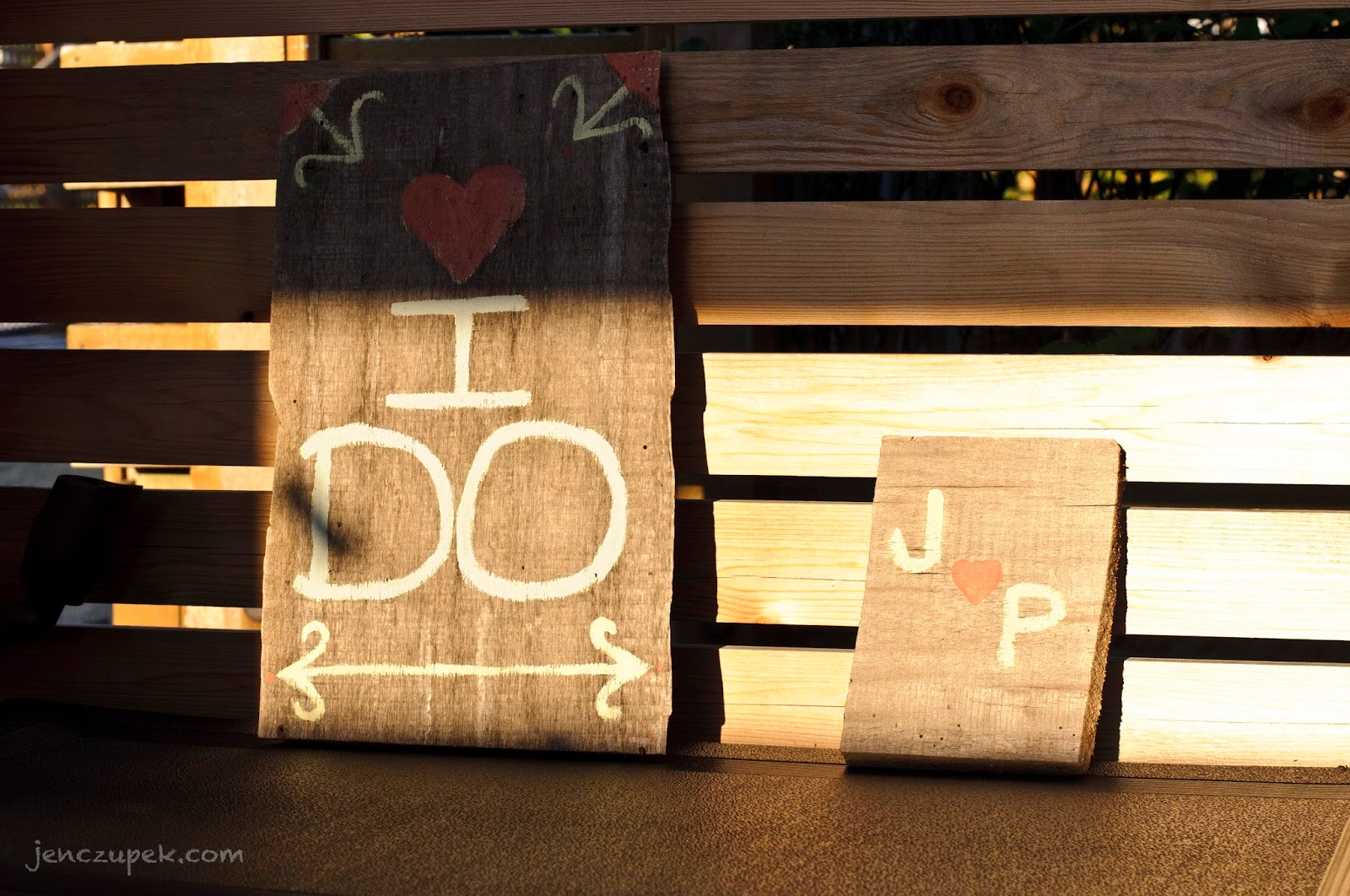 What an unbelievable weekend. It was an event...an extravaganza. Even Mr. "I hate weddings" Musky deemed it the best wedding he'd ever been to.
Maybe it was the perfect weather.
Or the perfect setting.
Or the awesome food, wine and energetic guests who got their party on. 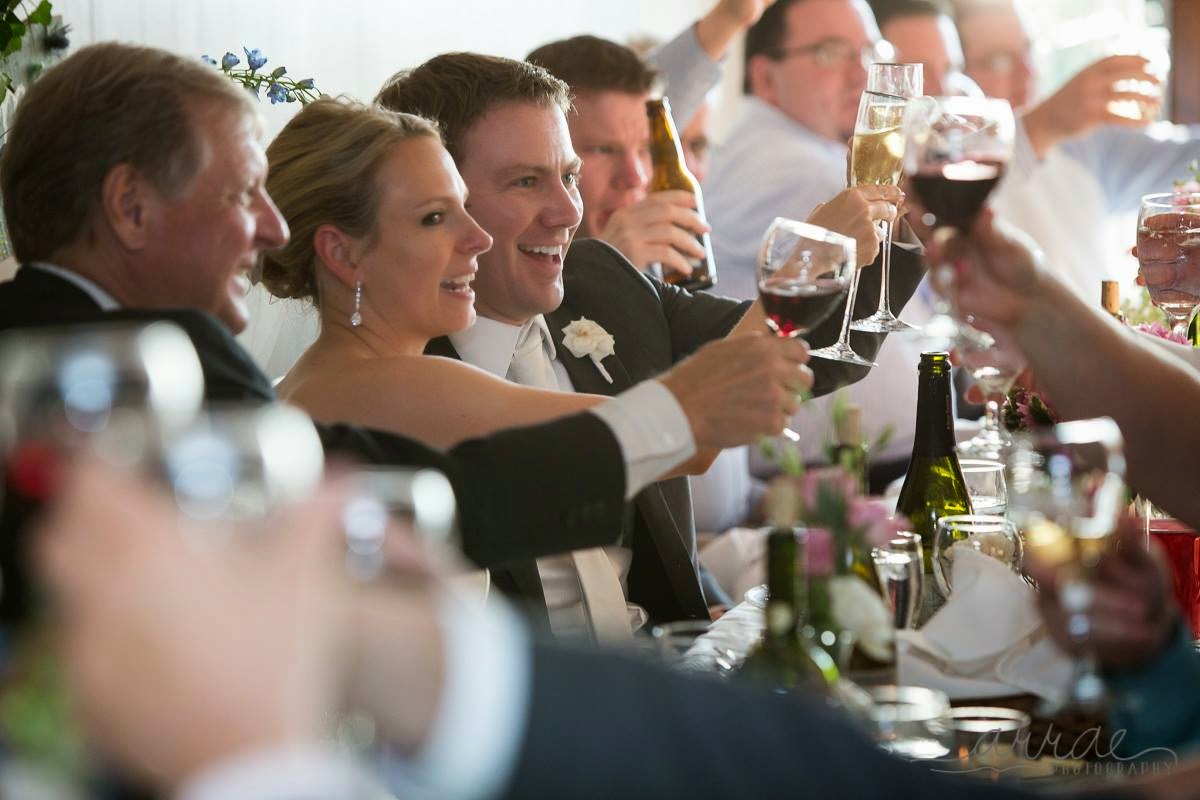 Or the fact it was a destination wedding,
complete with an outdoor dance floor and plenty of refreshments to quench our thirst as the sun set in the background. 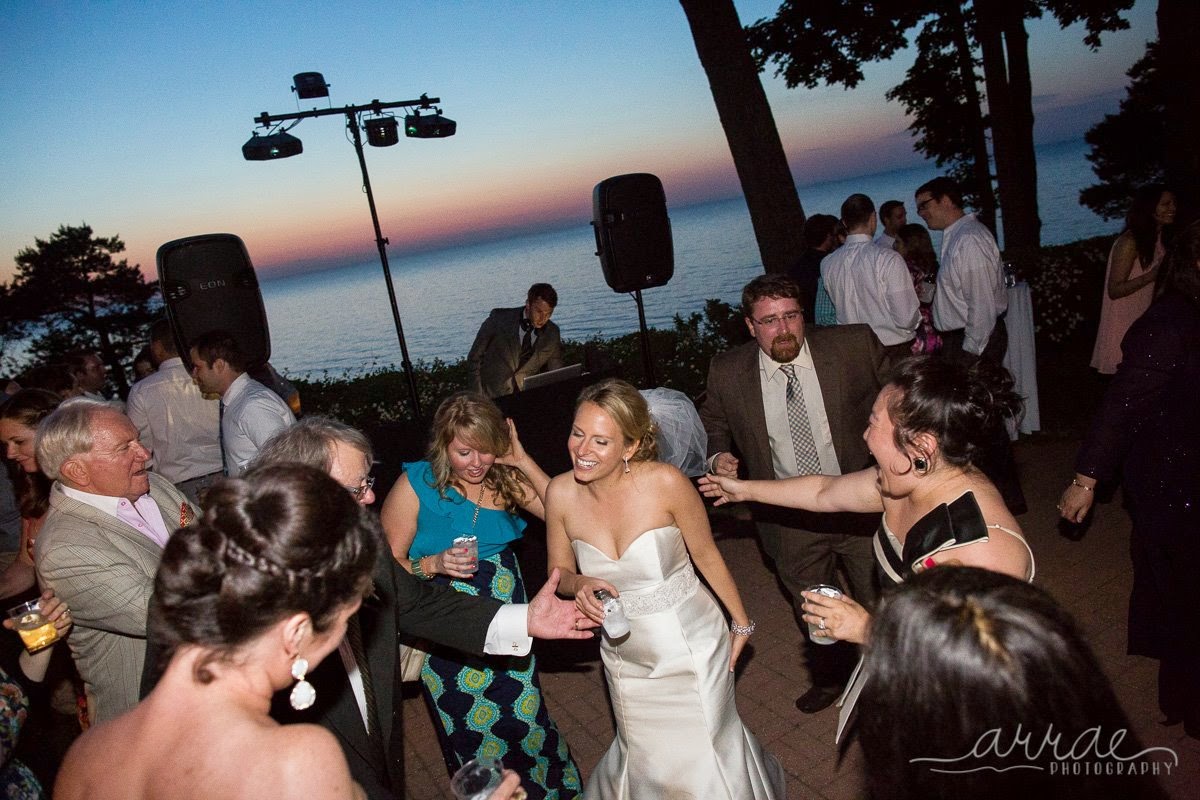 None of the above. Mr. Musky liked this wedding for two distinct reasons. 1. He politely asked and the bride granted him permission to change into shorts and a t-shirt after dinner. I'm thinking that secured the win for him. Because death is surely imminent if one wears a suit and tie in gorgeous 70 degree weather.
But later he confessed it was 2. Being able to hang with his uncles at a non-holiday event, when nobody was hosting, where they could all just relax and gab for hours on end while taking in a breathtaking view. And lifting a beverage or five.
We all enjoyed beaching it, getting to know Patrick's family and hanging with Mr. Musky's extended family. His cousins are young and energetic and full of fun. We embraced "destination wedding" to its fullest, from the beachside bonfire Friday night to a final gathering on the beach Sunday, despite a bit of green-around-the-gills syndrome for some. Regardless of their level on the hangover scale, everyone willed the weekend to hang on for just a little bit longer before we called it a wrap. 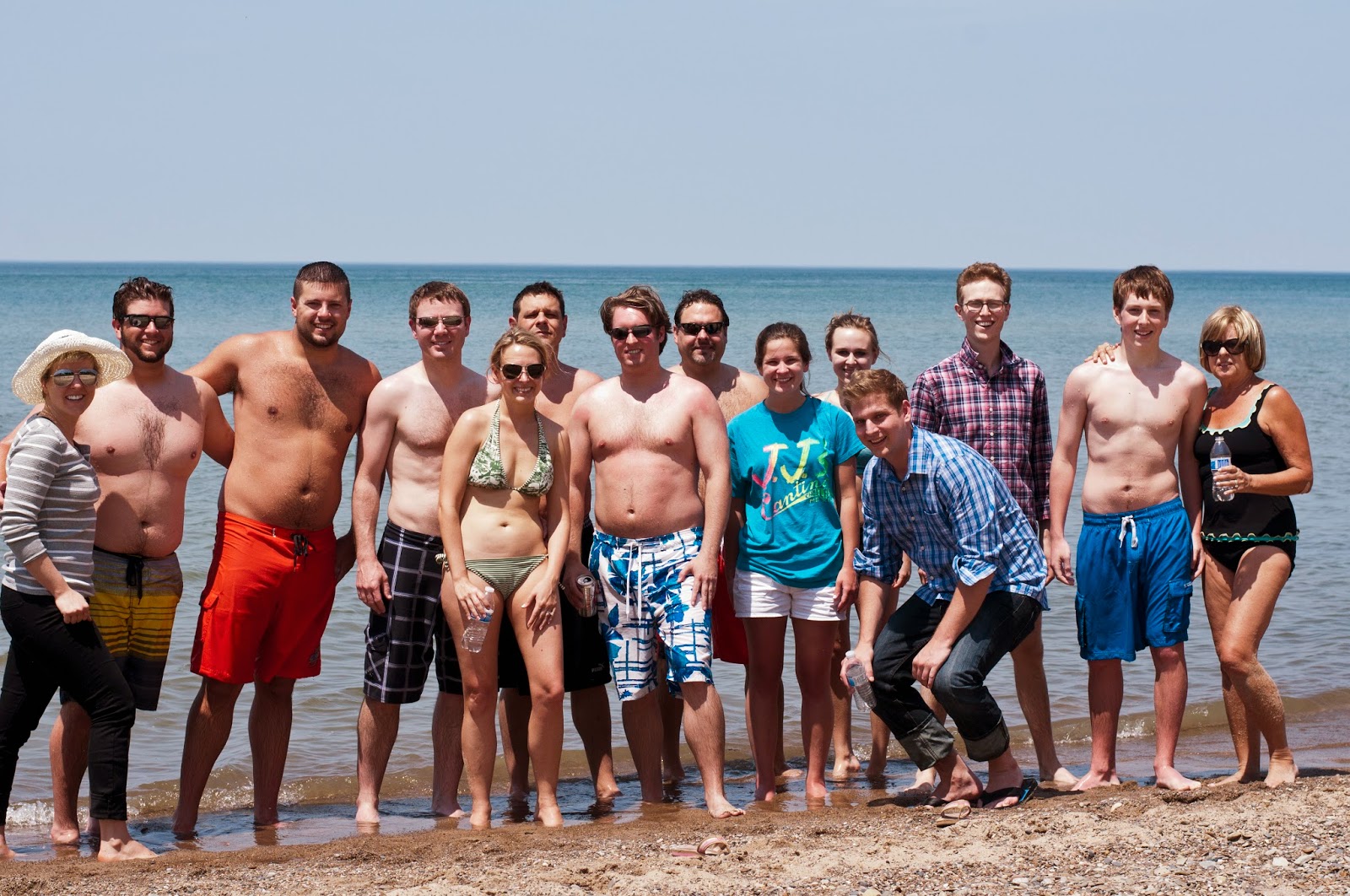 It was a blast.

We thoroughly enjoyed kicking the summer off and bringing it to a close with these two. 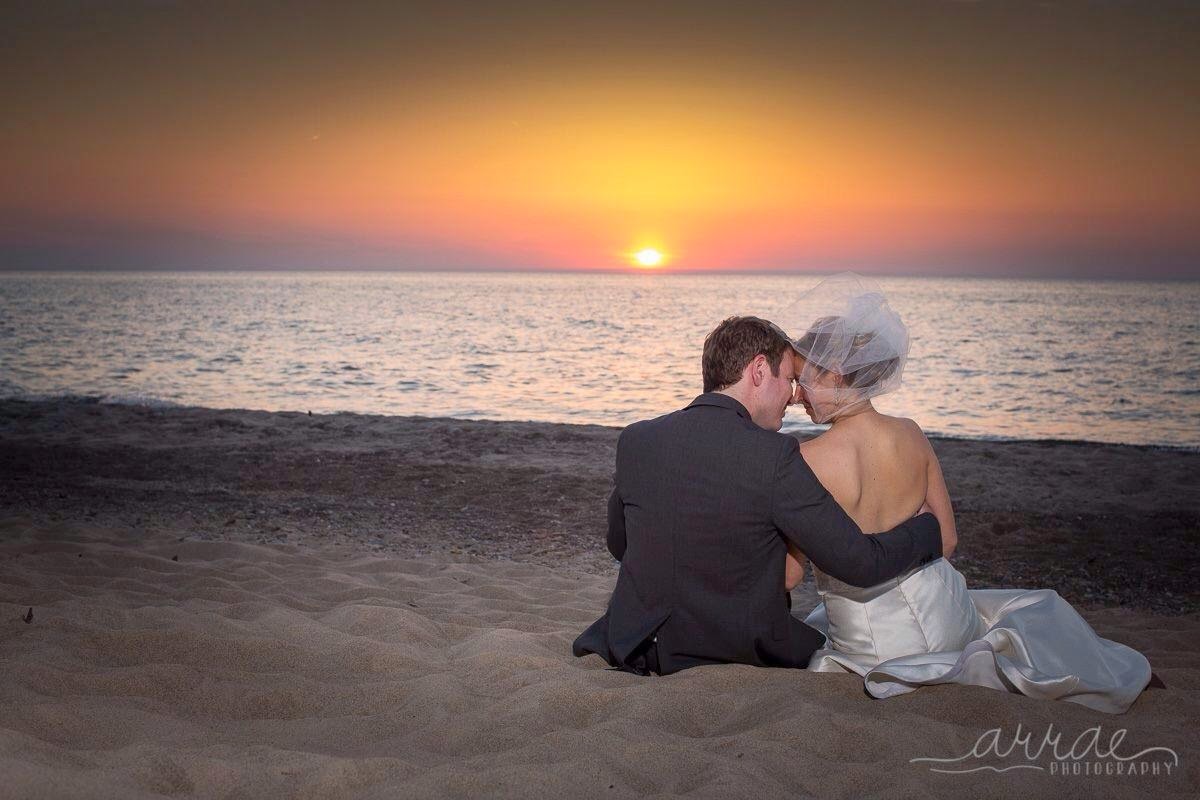