Earlier this week, I insisted that winter is over, and I would hereby embrace the open toed shoe.
Today I wear boots...AGAIN...thanks to the inch of SNOW falling from the sky this morning. I love winter weather when I can fully embrace it, but those days for 2015 have come to an end. It's time for tulips, sunshine and grilled food.

If I can't be outside sipping my cocktail, then I'll bring it inside, close my eyes, inhale and pretend. In my fluffy, soft cardigan and tall boots.

Mother Nature, Imma Mollywop You! That's teenager ghetto speak for I'm going to kick your a$$! But to fuel my gumption, first I'll have one of these pretty babies. I call it... 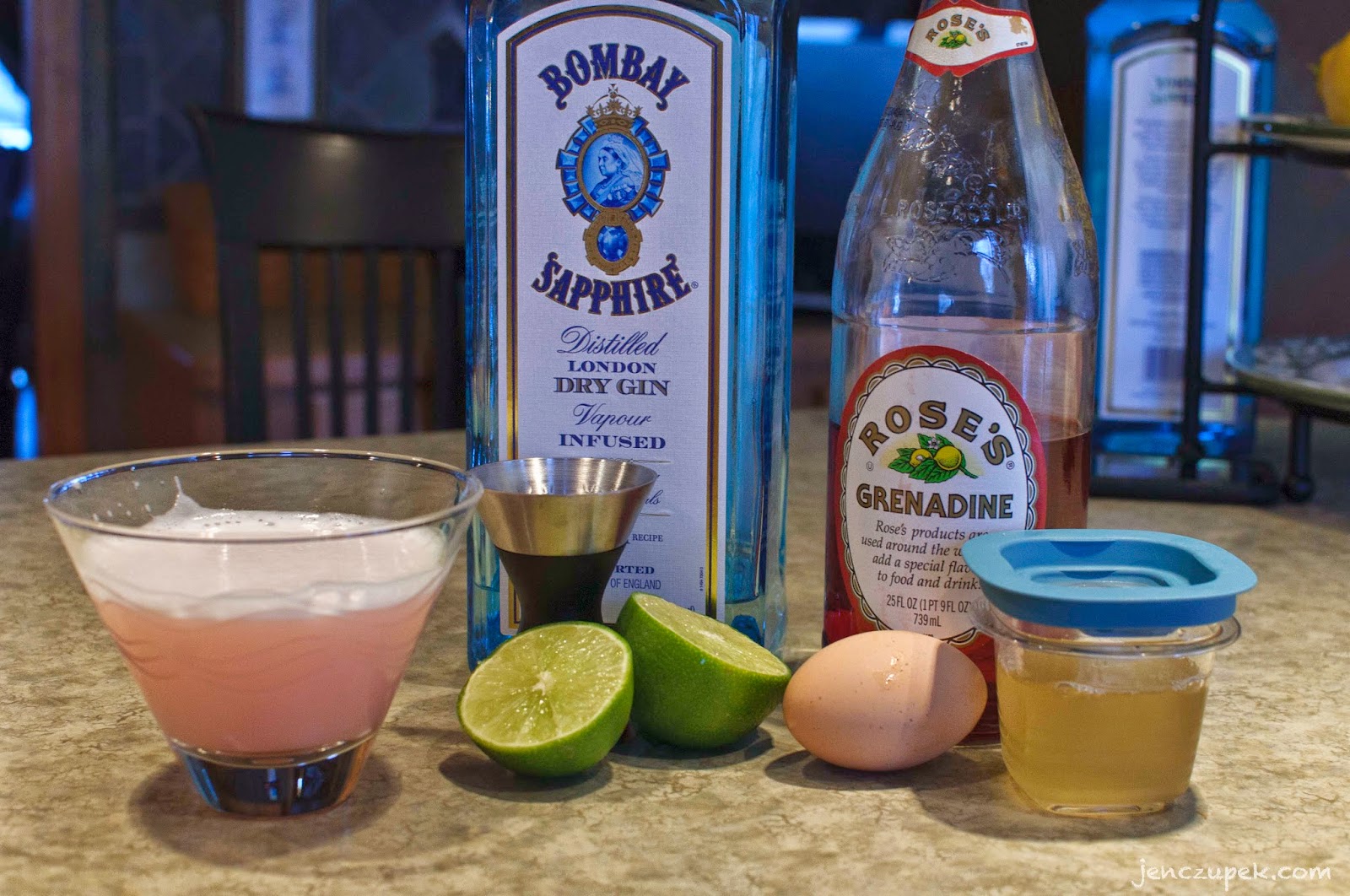 Springtime. How can I not? The Easter Egg colors move my spirit even if the wind howling outside so obstinately contradicts my heart's desire. And yes - that's an egg in the above photo. Don't fear the ingredients in this one - I assure you an egg white is safe and a critical ingredient for the consistency and texture to this gem. If you're completely against eggs in cocktails, read this post, then this one for some reassurance. I purchase our eggs from a local farm, and each one is individually washed in an all-natural enzyme cleanser, so I fear not. I say go for it! Adding the egg white really transforms the drink. It's light, bright and balanced...the Grenadine and honey simple syrup balance the acidity of the lime and the sharpness of the gin. And it's so very pretty to look at on a frigid day. If I can't see pink tulips, green grass and yellow daffodils out my window, I'll just peer down into my cocktail glass. 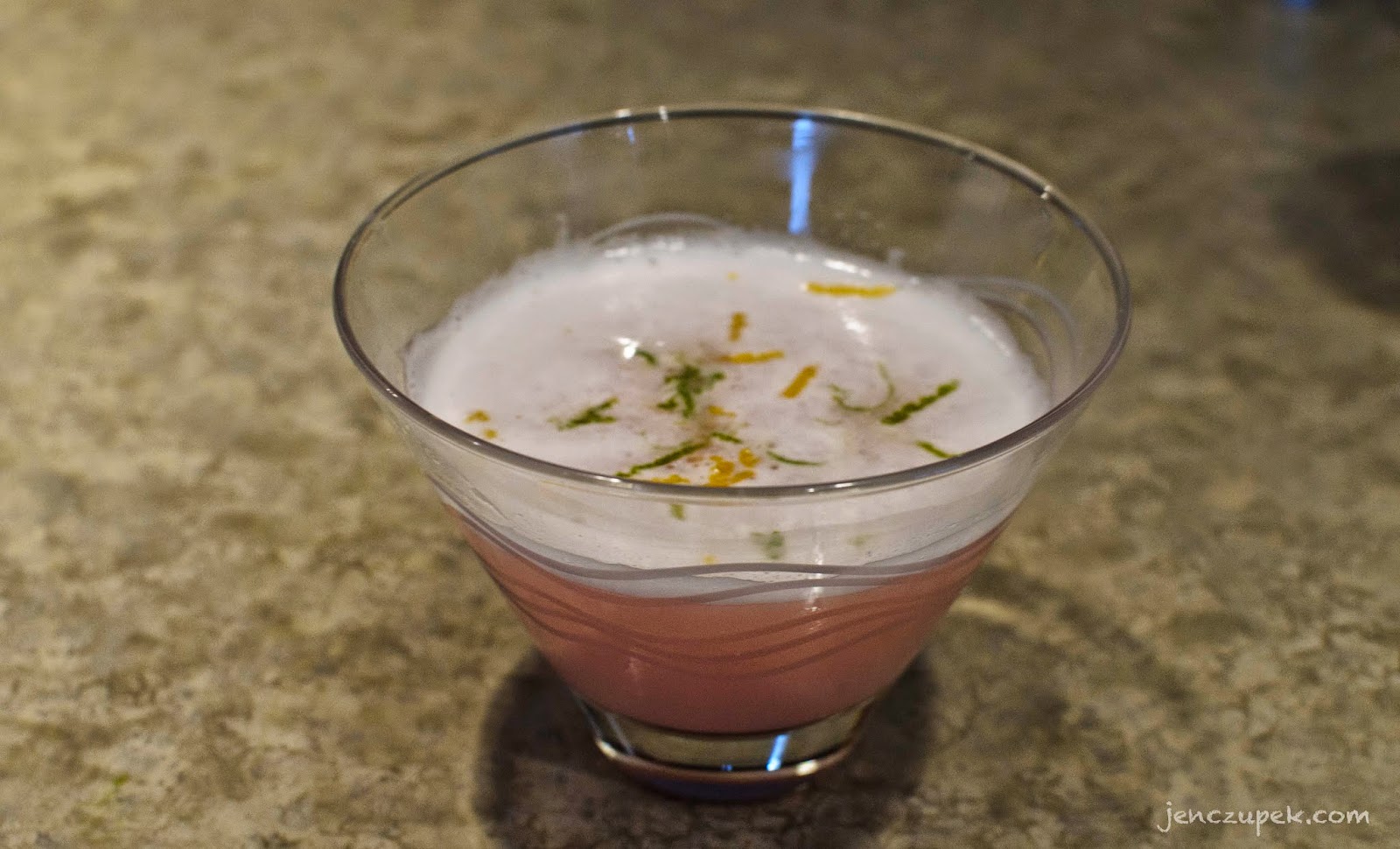 In embracing the theme of indoor everything, here's a tasty appetizer that's hearty enough to double as a main course if you eat two. These made an appearance on girl's weekend, and I've yet to find a girlfriend, teenager or husband who doesn't like them. 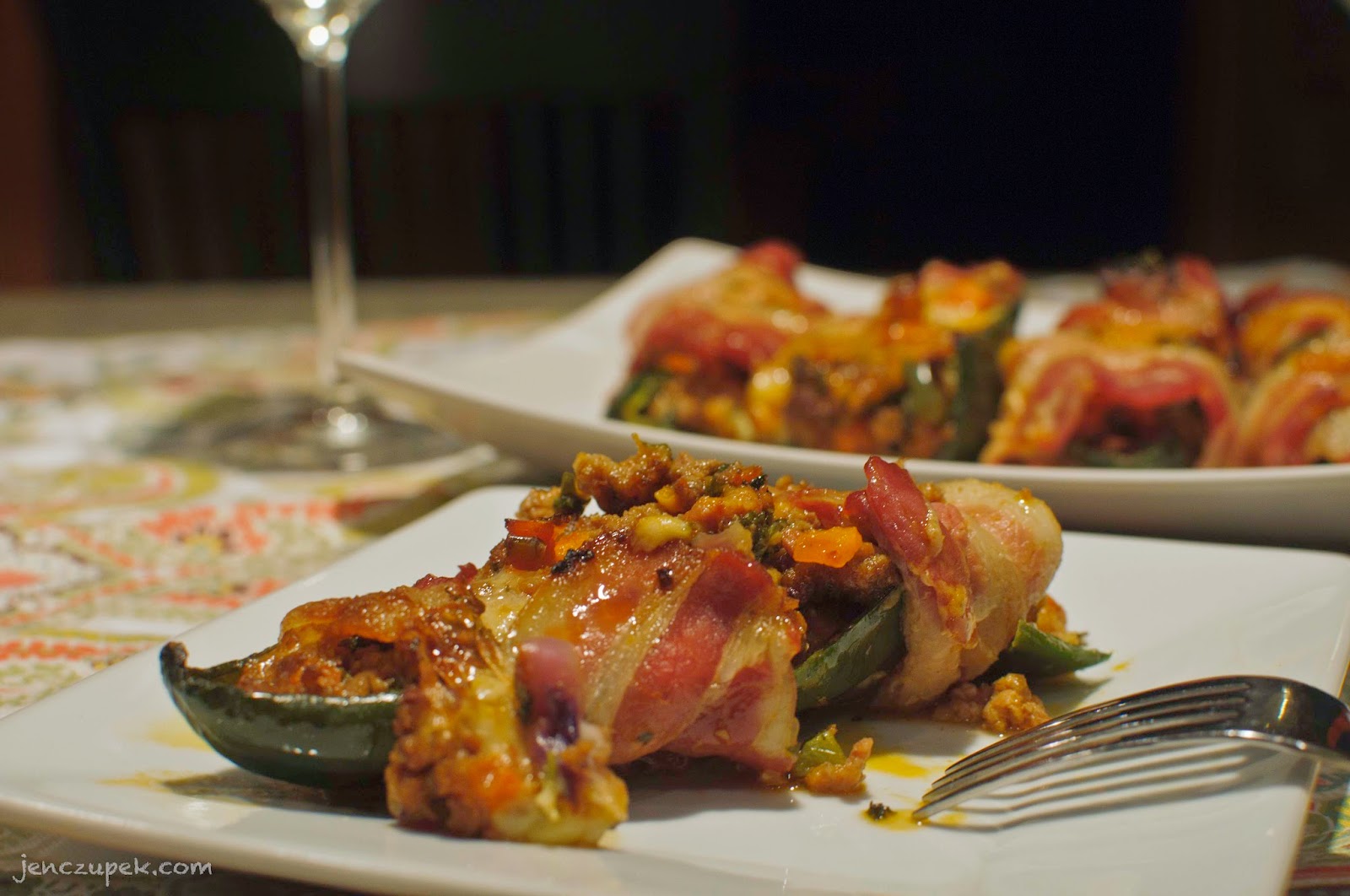 Or a dogger. Miller went a little bonkers on Stuffed Poblano Pepper night. Since I purposefully made extra filling for breakfast, I gave the old boy a little taste. How can I resist the peek around the corner? 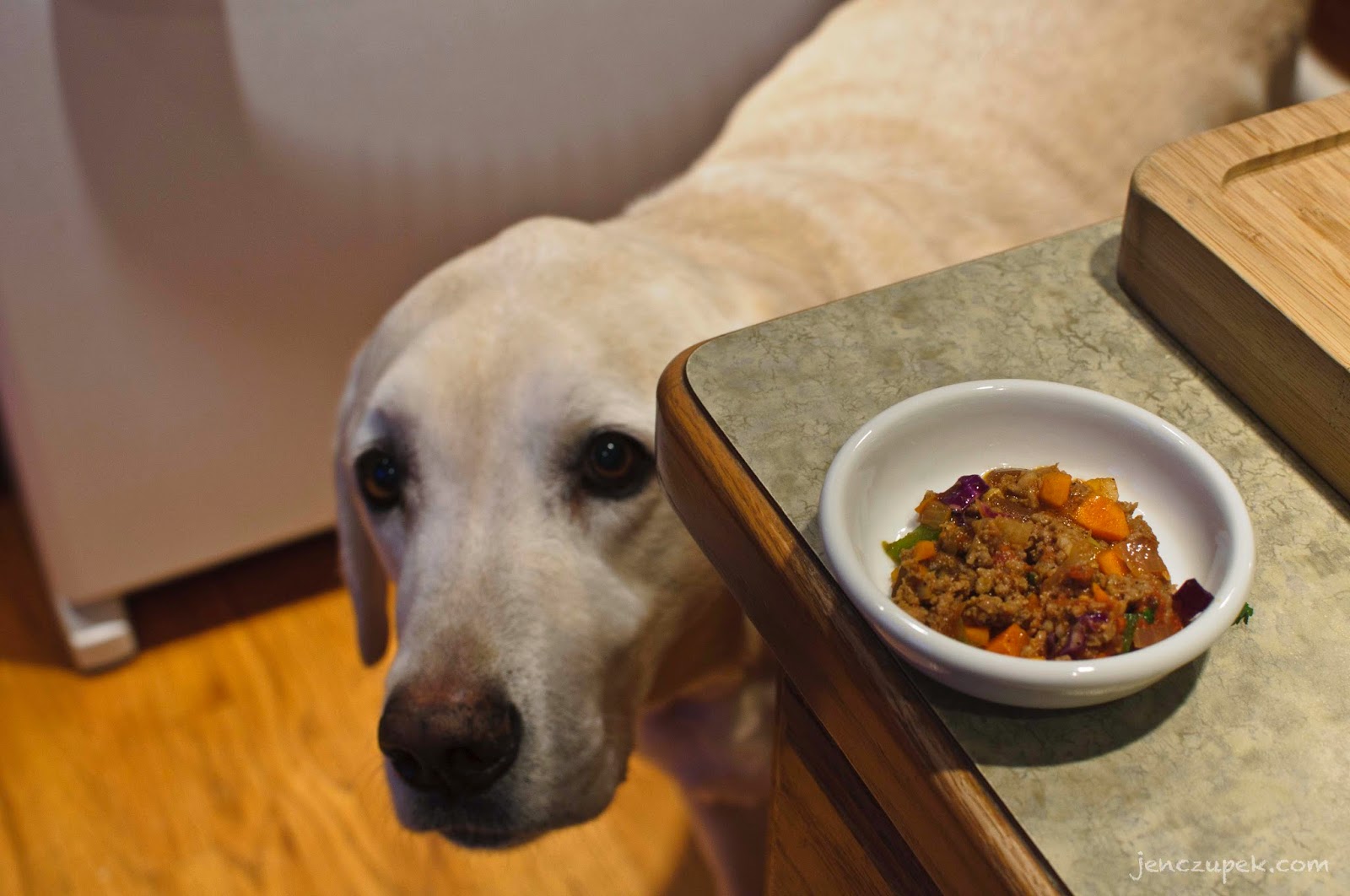 He smacked his lips over and over. He certainly sensed the spice in this, but it didn't stop him from licking his little treat bowl clean. And asking for seconds. 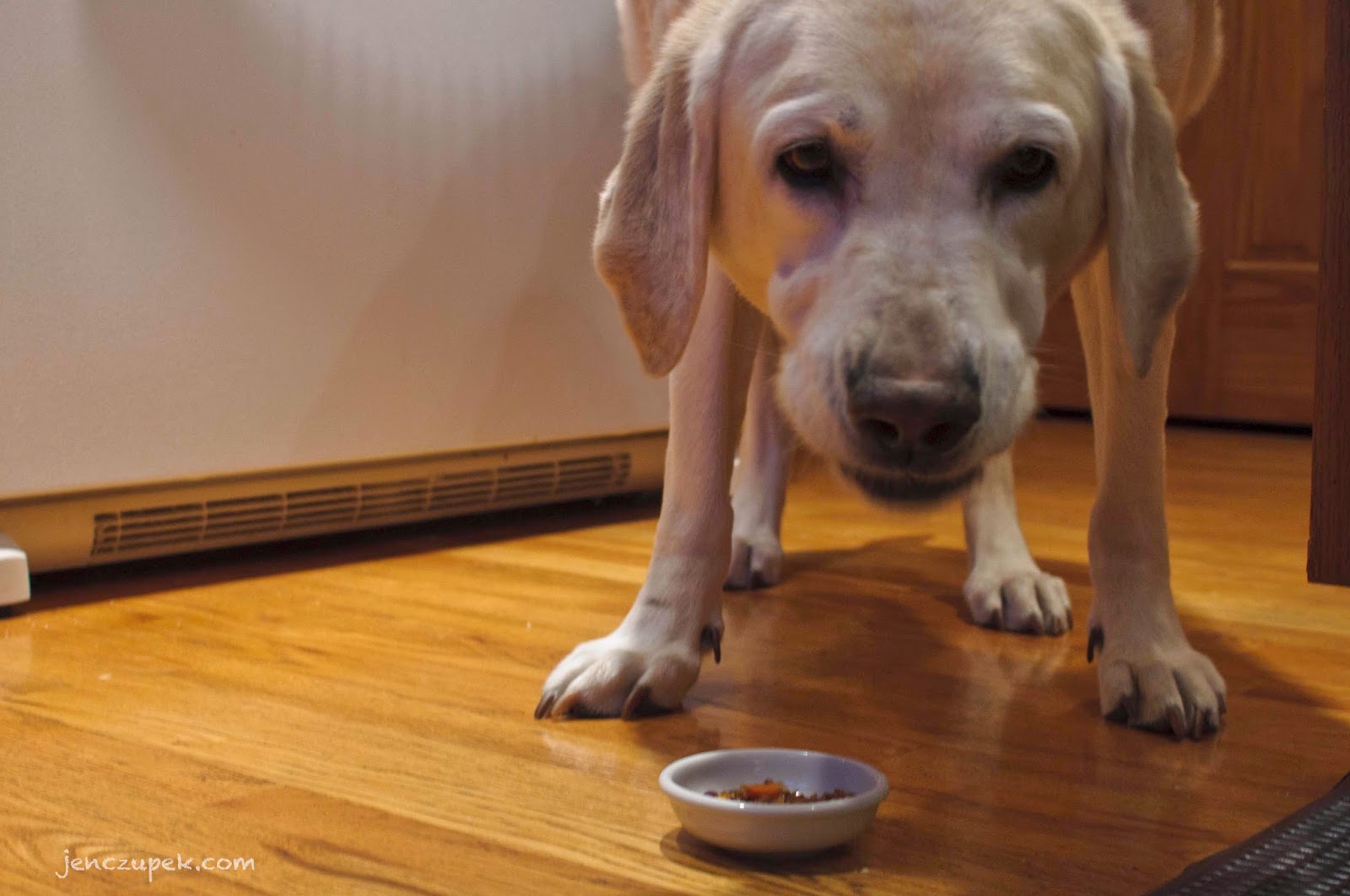 While assembling these puppies though, it is tricky to stop the people from sampling. Which is OK, because the mix makes twice the amount you'll need, unless you buy extra poblanos for stuffing. This is an incredible base for your over-medium fried egg the next morning. 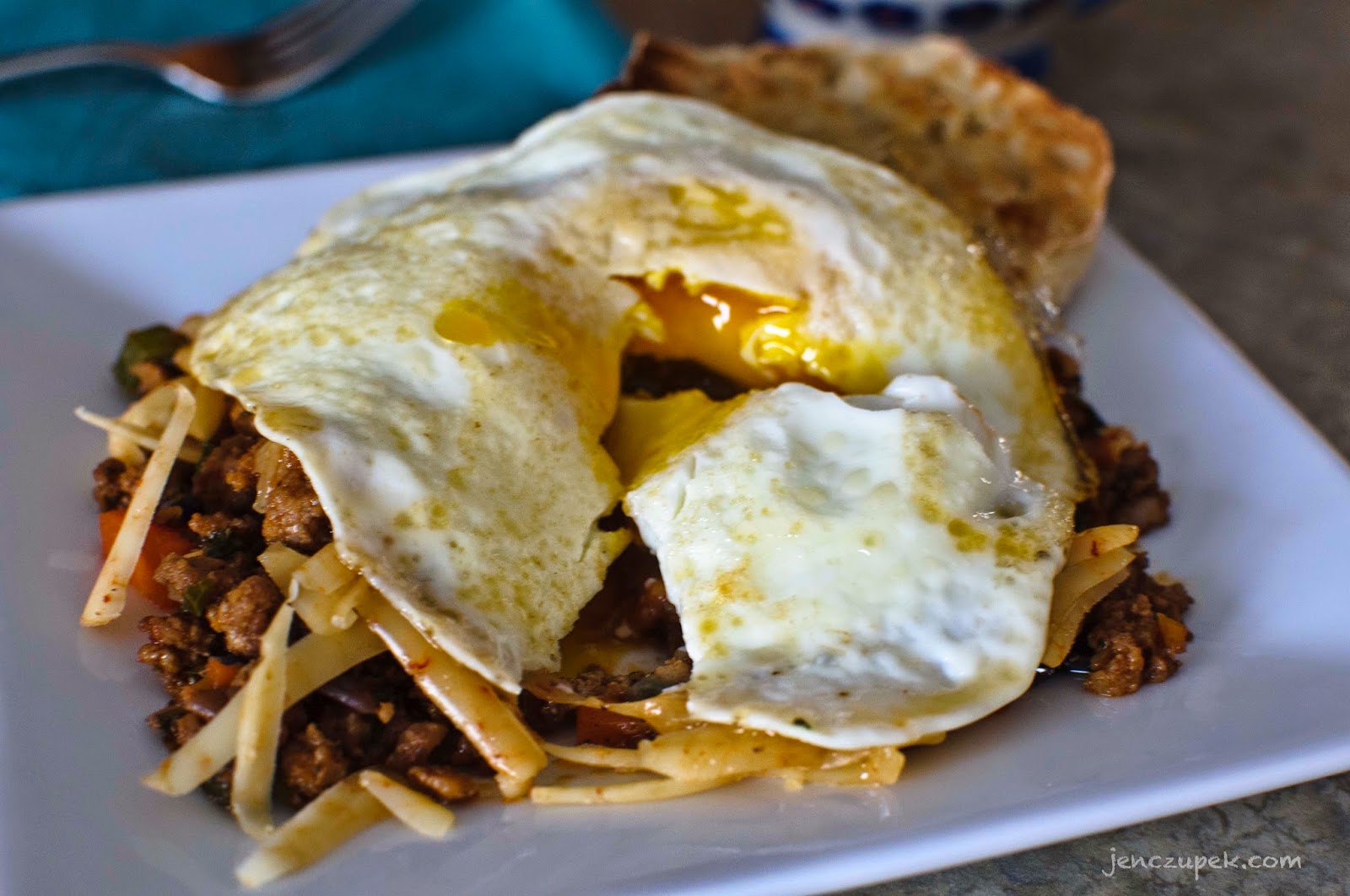 Here's to what hopefully will be the last indoor cooking night of the year. Good Riddance, Winter that won't leave!

Put the ice cubes into a cocktail shaker. Add the remaining ingredients and shake vigorously until a froth forms. Pour into a chilled cocktail or martini glass. Microplane some lemon and lime zest over the top.

Preheat your oven to 400 degrees.

In a cast iron skillet, brown the meats over medium to medium-high heat with 2 tsp kosher salt and 1 tsp cracked black pepper. Add the carrot, onion and green pepper, stir to combine and turn the heat down to medium to medium-low. Cook the vegetables for 5 minutes, then add the purple cabbage, kale, garlic, cilantro, cumin and salsa. Continue cooking on low for 10 minutes so the flavors can meld. Taste the filling and adjust the seasonings to your liking.

While the filling simmers, prepare the poblano peppers by cutting them in half lengthwise and removing the seeds and membranes. Grate the cheese and set it aside.

To assemble: spoon a liberal amount of stuffing into each halved poblano, firmly packing it into the pepper. Sprinkle the top with cheese and wrap each pepper with a slice of bacon (the thinner the bacon the more it will crisp in the oven. If you are using thicker bacon, consider partially frying it before wrapping the peppers). Repeat with the remaining peppers. Place in a glass baking dish sprayed with coconut oil or non stick spray and bake in the oven for 20 minutes or until the bacon is cooked (you may also turn the broiler on at the end to crisp things up, but just be sure to watch them so they don't burn).

Enjoy, and don't forget to use the leftovers for breakfast!