I probably should never pour my thoughts out on the screen when I feel the sap rising to the top and songs like Sara Bareilles' version of Dock of the Bay leave me in tears with goosebumps everywhere and a wanderlust my budget won't currently support.

But here I sit. I reflected a lot last week, the week of Thanksgiving, on what matters most to me. Family wasn't at the forefront of my mind. Not because they aren't important to me - quite the contrary. They are the most important to me. Never a day goes by when I don't think about how blessed I am to have loving parents, a kind and sassy mother-in-law who teaches me so much by just being herself, amazing brothers- and sisters-in law who love me not because they have to, but because they choose to. My sweet neice and nephew, who I miss and love in oscillating, equal amounts. My brother. Who I don't have to talk to on a weekly basis to know when I need him, he is there.

And my own people - my heart and soul. Mr. Musky. Our kids. I thank God every night for them, their good health, their kind hearts, and their unconditional love.

Family, both immediate and extended, is constantly at the center of my mind. Because of that, my thoughts drift this time of year to the next important ring of people in my life.

Several groups of friends influence me, and the beauty is that we needn't talk on a regular basis to synch back together. I've blathered on and on about the importance of girlfriends in my life, and you can read about all girls weekend adventures by selecting any number of posts in the menu bar.

In September a small group joined me at the cabin again for some fall antics. I've delayed over and over recapping our exploits, because they left me with little to post. On night one, it was a bawl fest for multiple reasons, but it seemed the appropriate time for us all to air the bad stuff in our lives. So by the glow of wood burning in the fireplace and candles flickering in the family room, we took turns, talking about the weights of the world on our shoulders. 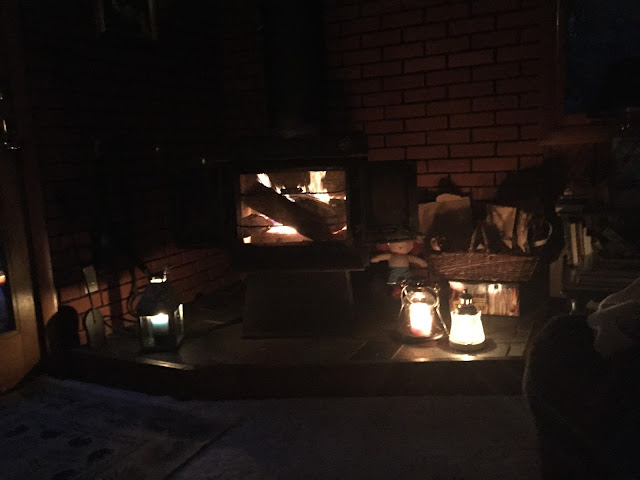 It was private, and I won't share what we discussed. But I will tell you this - it mattered. To all of us, on varying scales of importance. We listened and offered encouragement. We talked until our voices turned hoarse. We cried together until we looked like Rocky. "Cut me, Mick." 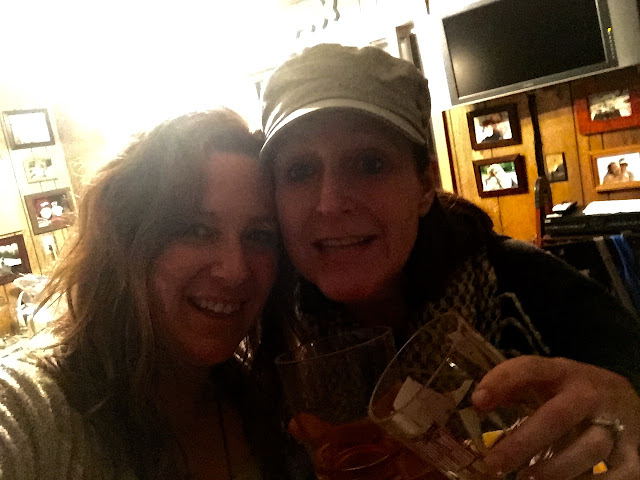 And yes, we drank. But I'll take a little tipsy over regular psychiatrist visits any day. Because that's what girls weekends are: Group Therapy. Where everyone comes in with our hidden hurts and insecurities, we can talk or just listen, but nobody may judge. We're all in the game of life together, and some of us deal better than others. But none, and I mean NONE of us are perfect at it.

The next day dawned grey and rainy, but weather would not deter us from a memorable outing. 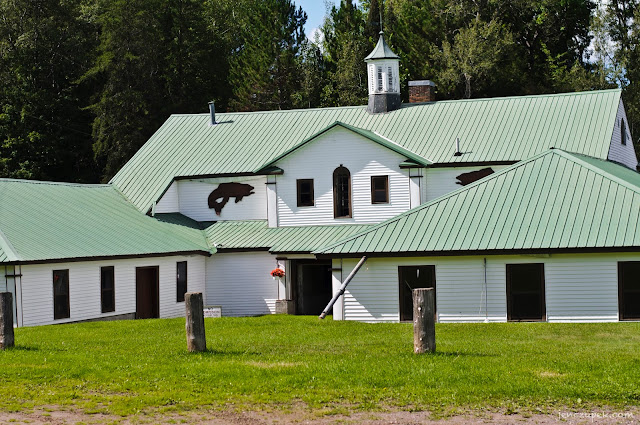 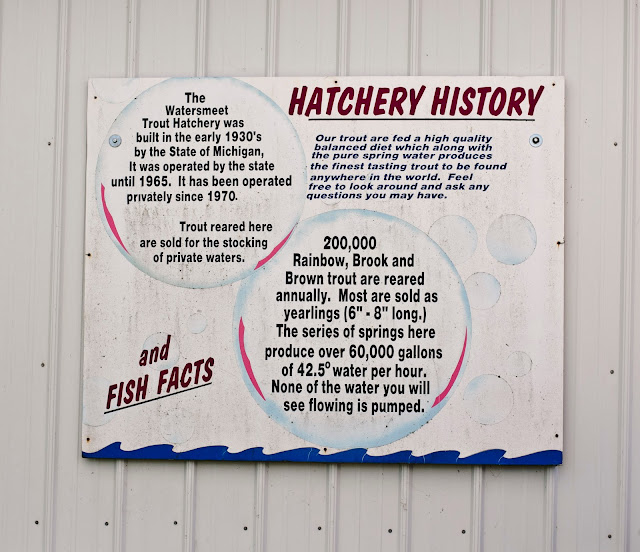 We traveled north to the Watersmeet Trout Hatchery in the Upper Peninsula of Michigan. I met the owner, Dino, at the Eagle River Farmer's Market over the summer. He, his wife Roberta and sweet daughter Amanda are some of the kindest people you'll ever meet. And don't even get me started on his adorable pup. 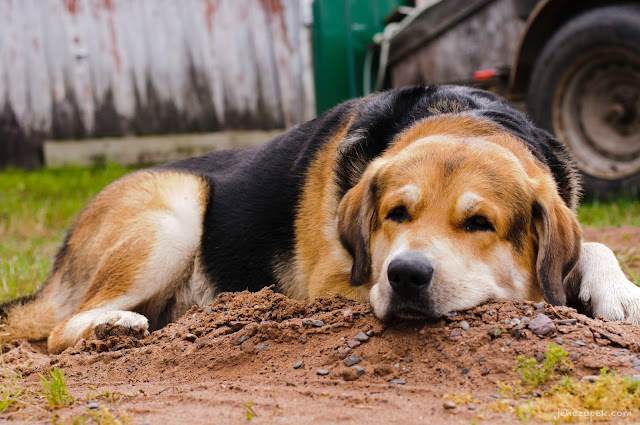 The dog whisperer made fast friends, 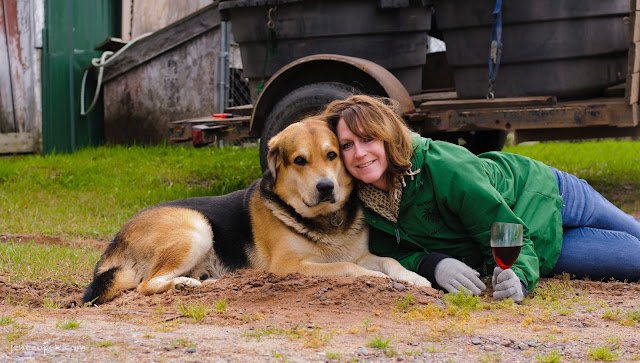 and also found herself a little kitty to love on. 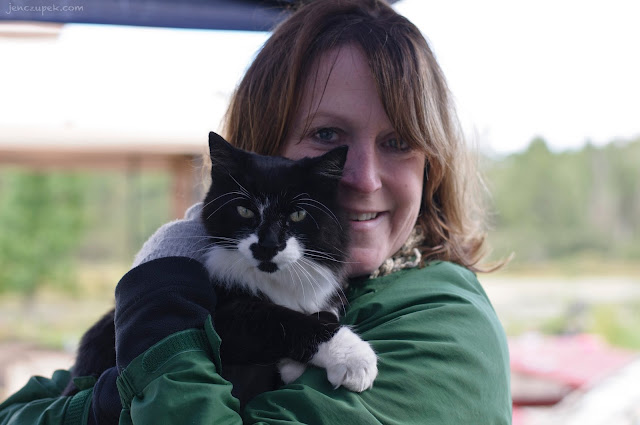 Dino toured us around the hatchery, sharing interesting bits of history mixed in with facts on the current operation while we sipped some vino. The weather eventually cleared so we could try our hand at trout fishing. 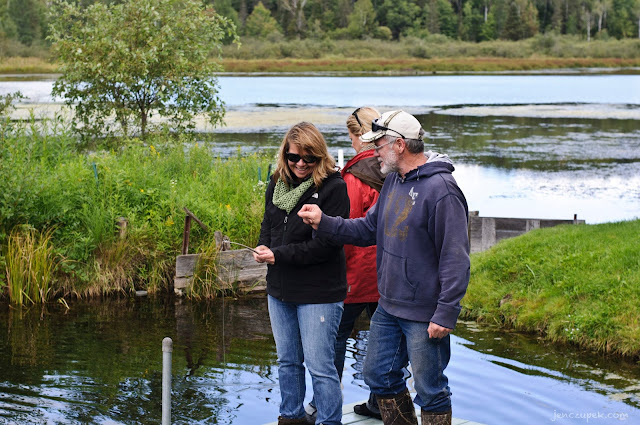 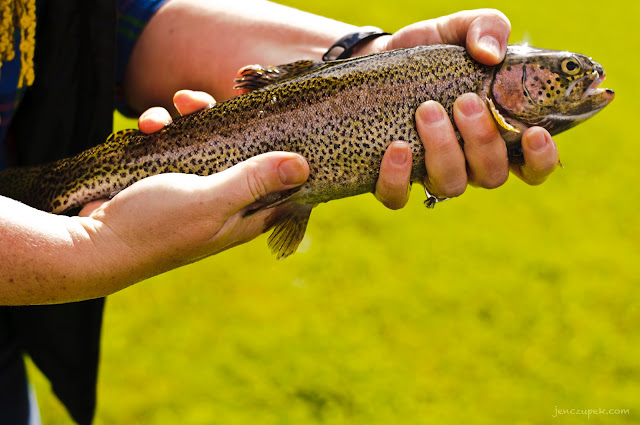 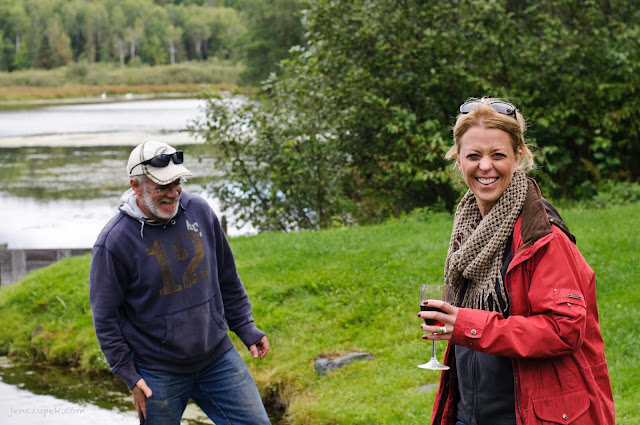 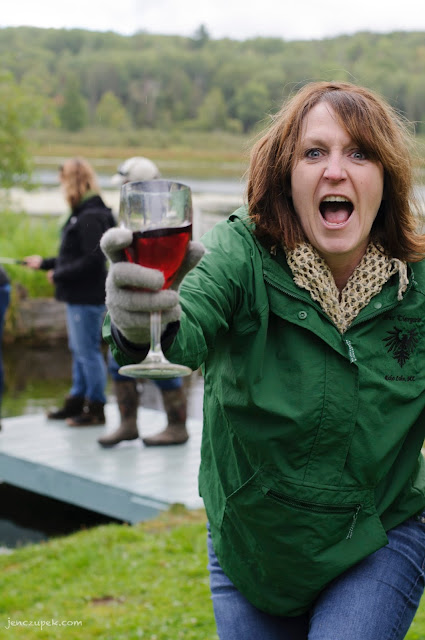 ...but Dino took it all in stride. We proved our adeptness at the multitask... 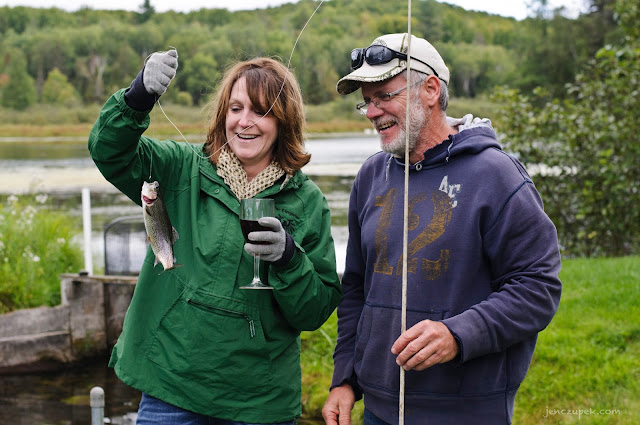 ...and Dino quickly figured out which of the four wondered prior to his arrival: "Will the guide be shirtless?" 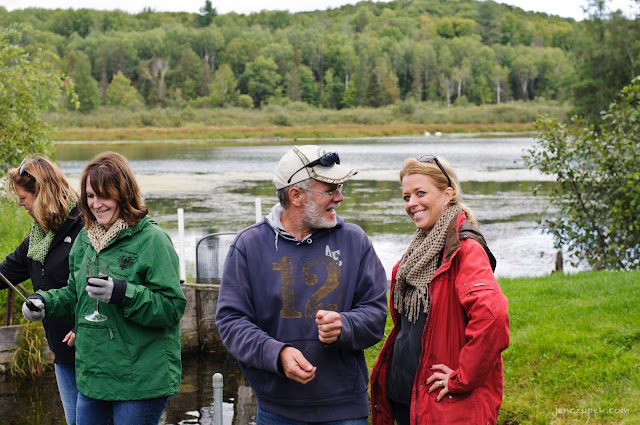 Believe it or not, everyone in the group caught fish. 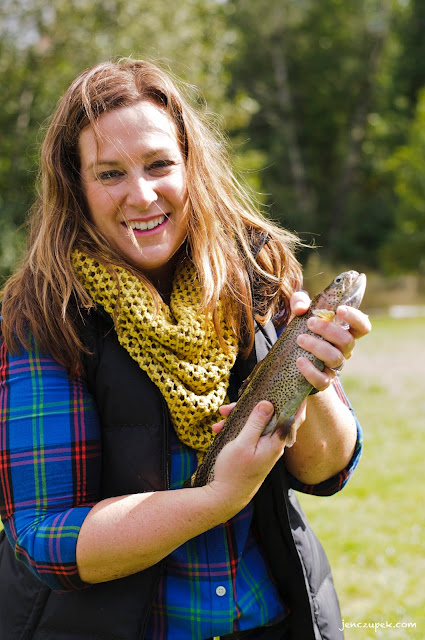 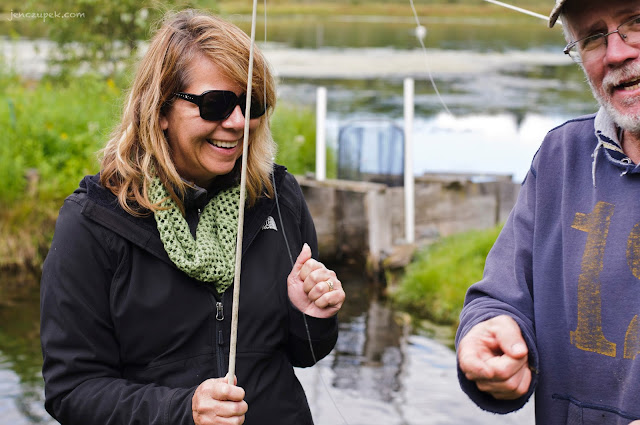 Tradition, at least that of a youth group who makes an annual visit to the hatchery, states that everyone must bite the head off a live fish. 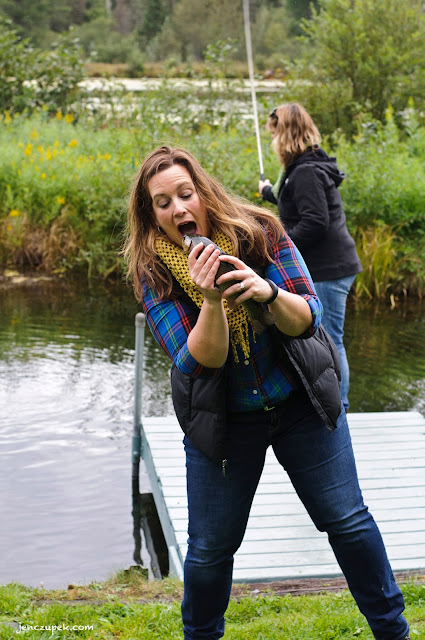 Don't worry. I couldn't muster the courage. But this? 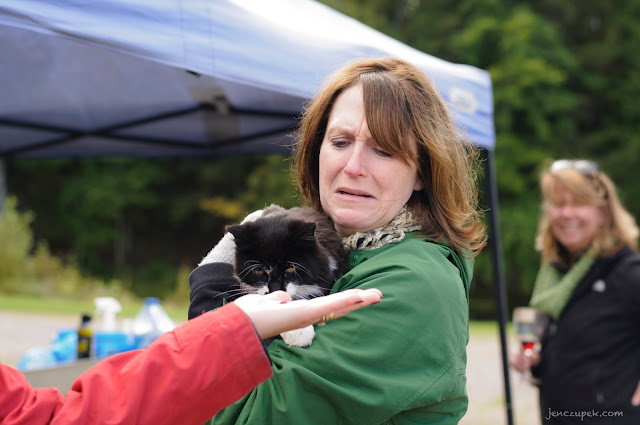 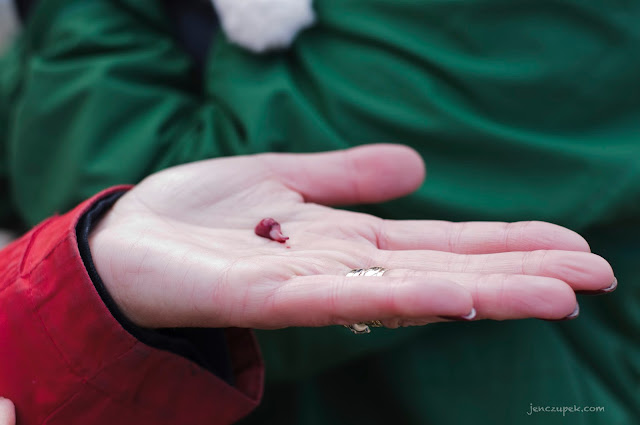 You betcha. I downed that sucker like it was my business...I promise I did. But I did it so fast nobody caught it on camera. The adorable pooch, however, unashamedly devoured his mid-day snacks. 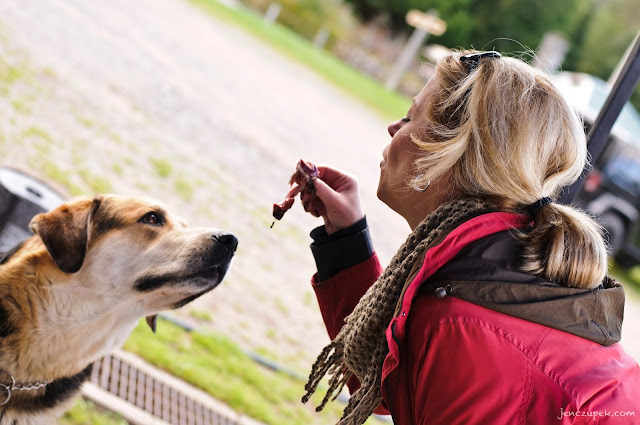 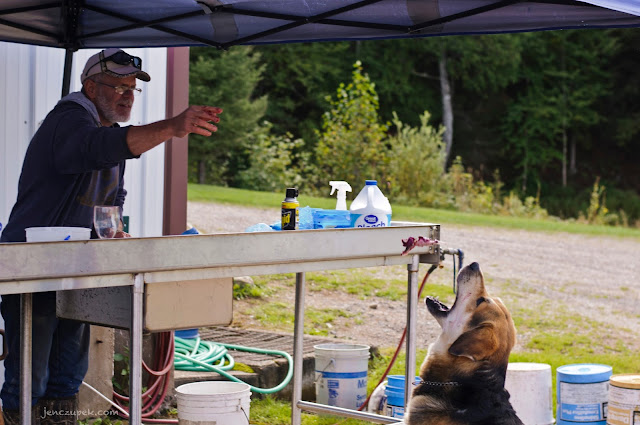 We had such a great time on our little outing. 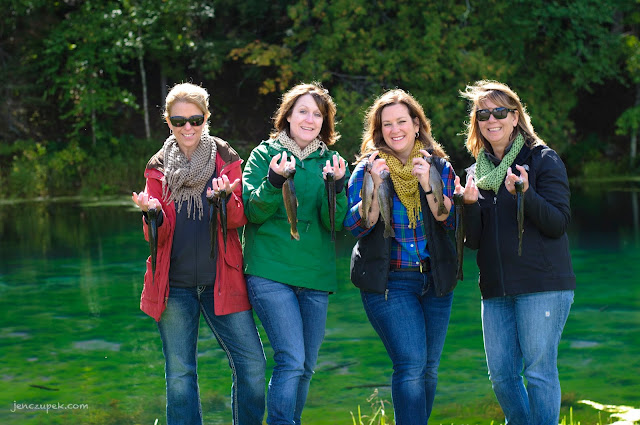 But it wouldn't have been nearly as fun without these three. 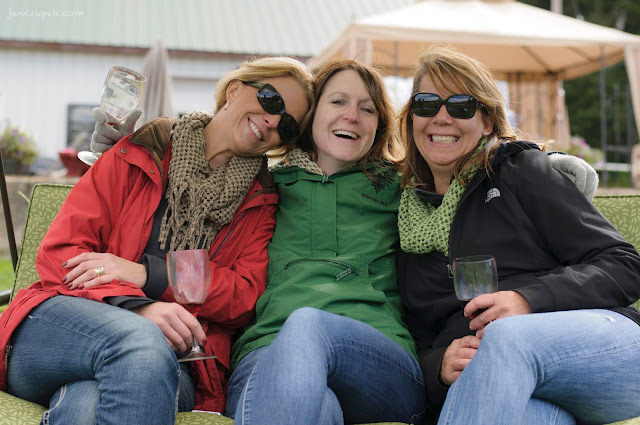 I would chalk this up as another worthwhile Northwoods adventure. If any of you ever visit or vacation North of Route 8, give Dino a call and set up some time to spend at the hatchery. You'll love it, Dino's hospitality, and the memories you'll make there.

Later that night we returned to the cabin. It took awhile to recharge ourselves, but when we did? 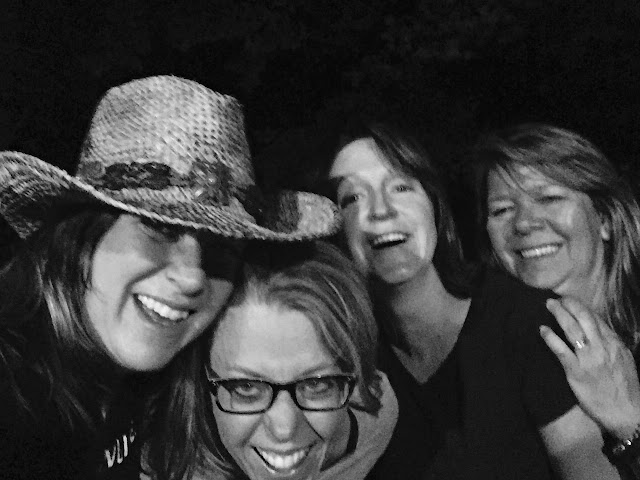 Sheer ridiculousness. I can't even tell about what we did. It just evolved naturally, and if we all felt melancholy on night one, the antithesis ruled on night two. We partied like nut jobs in the privacy of an isolated cabin and acted like total lunatics. It might be the most spontaneous fun I've ever had in my life. 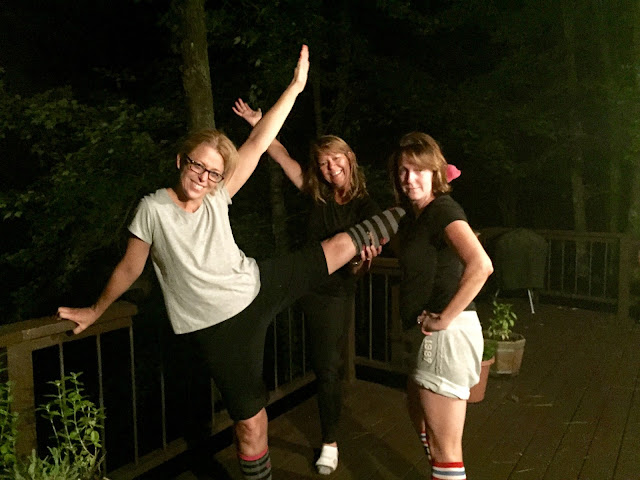 The next morning afternoon we finally rallied for a boat ride; some more quickly than others. 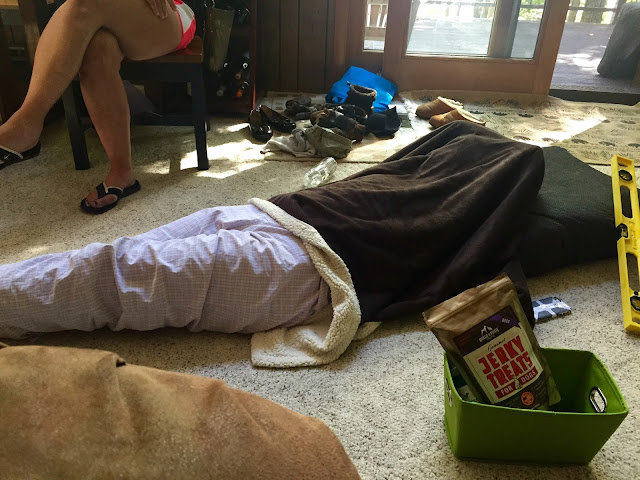 I love the fashion on girls weekends. It's far more entertaining and functional than anything you'd ever see on a New York runway. 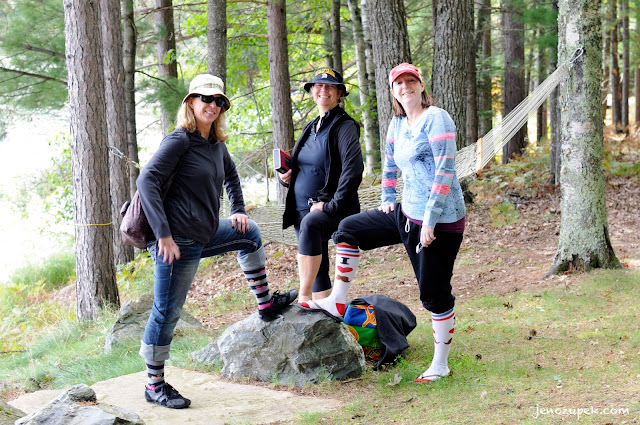 I wouldn't call that boat ride the most epic the Sugar Camp Chain's ever seen, but a little Mick Jagger finally got the girls off their butts, 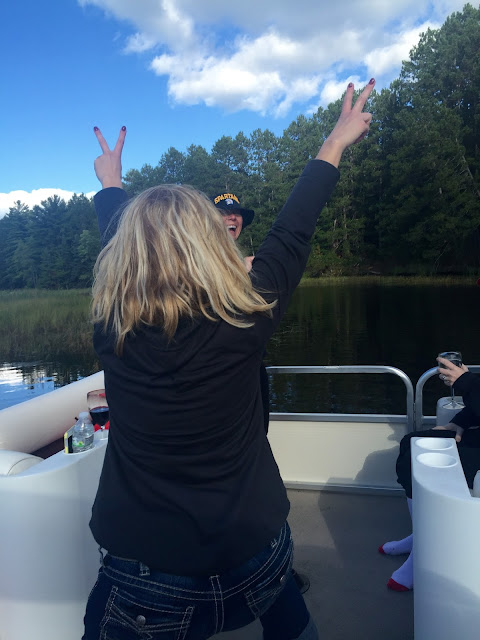 for a little boat ride dancing. 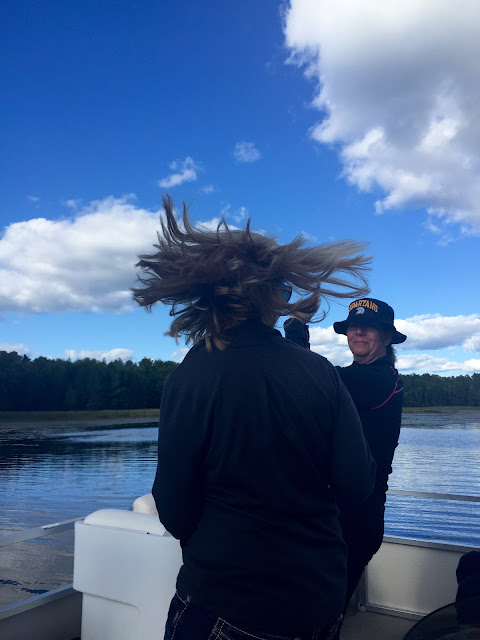 We returned to make a campfire, sip scotch and wine, and cook our trout. 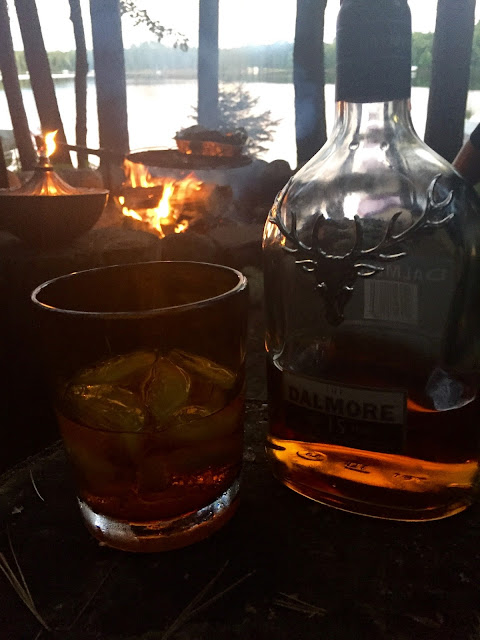 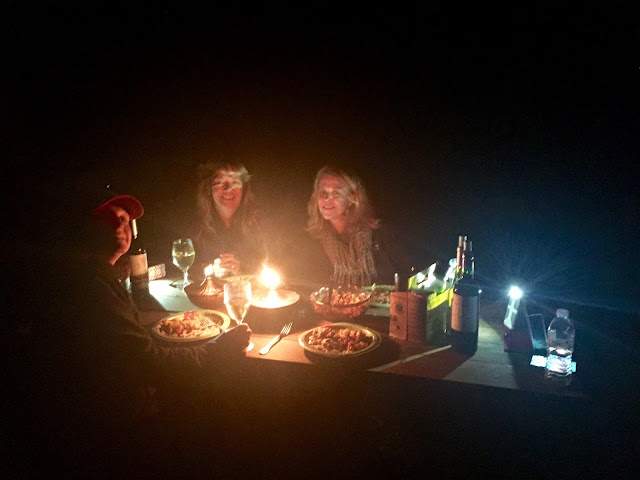 We ended up dining in the dark, and while the fish tasted delicious, it was a bit tricky to eat as it's full of bones. Either I need to research how to prepare trout or I'll leave it to the professionals and order it in restaurants. We ended the night by the campfire and some additional shenanigans ensued, but that's where I censor the reality of what happened.

One of my good friends moved to Germany after our winter weekend last year to realize a lifelong dream - to see all the amazing sights she learned about in college as an Art History major. She is teaching her daughters what it means to sacrifice to chase a life dream. At work she leads a group of people while scary stuff goes down nearby, and Paris exists just a train ride away, shrinking the world that much more and bringing disturbing events ever closer to home. She tries new food, embarks upon an adventure every weekend, posts magnificent pictures of her escapades and appears to be living the life of Riley.

You know what she said to me recently? That she longs for a six hour car ride, heading north, with our other friend. She wants to feel safe, to talk until she can't say another word, to get things off her chest and to land in a cozy cabin in the woods to recharge her batteries. Despite how things appear for even the most impressive people, in the end we're all just that. People. With the need to connect, alleviate loneliness, to feel loved and connected.

We all need friends with whom we can rip lose. Pretend we're kids again. Drink until we puke. Drive in a car over a frozen lake. Escalate an argument to rolling around on the ground, getting dirt and pinecones in our underwear. Try something new. Party with a gorilla. Discuss the things that hurt the most. Feed a bird out of our bare hand in the middle of the woods. Fish for trout. Tell our life stories, even the bad parts. Flash some duck hunters. Dance naked. Spill wine on a girlfriend, unintentionally. Spill wine on a girlfriend, intentionally. Chat up motorcycle gangs. Learn how to pee, standing up, outside. Say inappropriate, even untrue things about one another.

Then forgive each other minutes later, loving deeper than we ever imagined.

This Christmas, as I cocoon into thoughtful reflection, I am grateful for my friends, near and far. I hope to see many of you over the coming months. You all know who you are.

Posted by Jen Czupek at 8:53 AM No comments: