Temper Tantrum on a Massive Scale

For those of you who already know my friend the Musky and/or don't care to read this, then scroll down for the story past the first picture. Otherwise, please enlighten yourself on the subject matter for this post compliments of www.wordiq.com.

The name muskellunge is thought to be a corruption of the Ojibwa words maskinonge meaning "ugly fish" and lunge meaning "lake trout." Another possible etymology stems from maggue allongee, the name given to the fish by early French settlers meaning "long face."
Growing to lengths of 71-183 centimetres (2-6 feet) and weights of over 30 kilograms (66 pounds), muskellunge are powerful predators known for their ferocity. Anglers seek mature animals as coveted trophies or simply for a good fight.
Found in cold, clear lakes and large rivers, muskellunge closely resemble the northern pike in both appearance and behaviour. Like the pike, their bodies are elongate with flat heads and dorsal, pelvic and anal fins set far back of the head. This is the classic lie-in-wait or ambush predator body plan: Muskellunge lurk among the weeds and floating plants where they wait for an opportune moment to strike. Their linear speed is had at the expense of manoeuvrability. When not darting at targets, muskie prefer to remain stationary.
They prey upon anything small enough to fit inside their mouths, from other fish, crayfish and frogs, to ducklings, snakes, muskrats and other small hapless mammals. Their bill-shaped mouths are large with many sharp teeth; muskies engulf their prey head-first, often in a single gulp. Although the animals are capable of swallowing something up to 45 percent of their total length, selection must be made carefully. Muskellunge are sometimes found dead with their last meal lodged down their throats, apparently having drowned.
Musky - the fish of 10,000 casts. 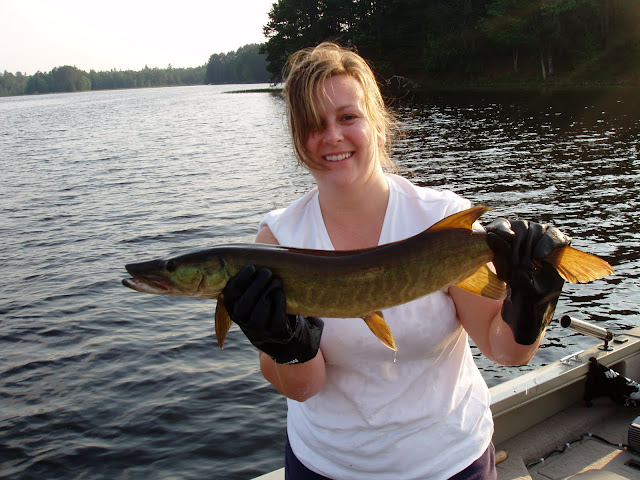 I am due. No - overdue. The last time I captured the Musky was in 2007. And I landed this baby. Baby as in a small Musky - not even legal. Legal is defined by how long the fish must be in order to keep it, but keeping these fish is unquestionably sacrilegious. One must "catch and release." Or the fishing fanatics will ostracize you, leaving you nobody with whom to share your fish tales.
We went to the farthest lake on our chain to work our way back as the sun set over the treetops throughout the afternoon. At the second fishing site, I put a new lure on. One that is tried and true on our chain and caught this beauty last fall. If it works for the Mighty Musky Man Mallidis, then it'll work for me. If only it had a splash of pink on it...'cause I like pink. 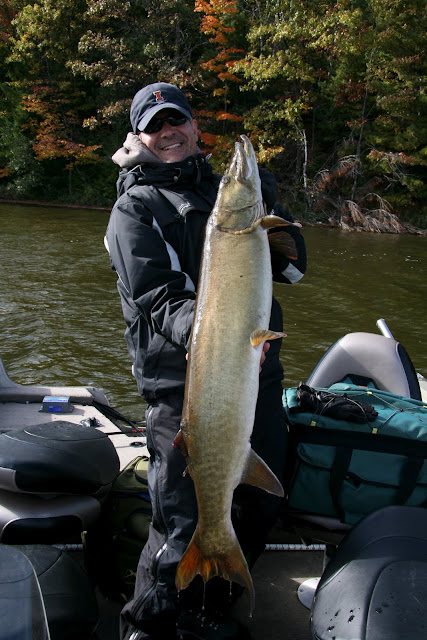 I heaved it out there with all my might. Yes, heaved. And by that, I mean squaring your body, getting your back into it, and horizontally launching with your entire body's weight. This Musky fishing is hard work. In my world, a total body workout. Which is why I almost always bring a book to read on these excursions. No - I'm not a pansy. I just hate working out.
Perhaps the greatest thing about Musky Fishing, second to actually catching one of the suckers, is the guilty pleasure of thought-wandering. Believe me, in the midst of those 10,000 casts, one's mind can contemplate the sheer beauty of prime, rare filet and cheese-filled rosemary potatoes over the fire or the ageless wonderment of the meaning of life. In other words, it is completely acceptable to daydream. And as I launched my lure again once I had the cadence of the retrieve for that deadly plastic piece down to a science, I began to dream. Of my kids, and what they were doing that exact moment - a thought I experience at least 25 times a day when they are at camp. Of my husband and how much I enjoy these repeats of our honeymoon, albeit in a much smaller boat than the cruise ship on which we sailed around the Bahamas. Of the chips packed in the boat bag, calling, "Eat Me." Of the lovely Leinenkugel Summer Shandy to my side. I am a multi-tasker by nature, and as a result my daydreaming is downright schizophrenic.
Suddenly a massive semi-truck with no brakes slammed me out of my reverie. No, a sixteen wheeler didn't turn into a Dells Duck and pummel our fishing boat. A gargantuan, prehistoric reptilian-like aquatic beast blasted me back to reality. And surprisingly, I did not pee myself. My heart raced and I may have whispered something in desperation. Because that is what overcomes the human anatomy when one of those slobs attacks. Fight or flight, baby.
Husband:  "Do you need the net?"
Duh.
I think every Musky Fisher-person does the exact same thing next. Wonders:  HOW BIG? Is this the beast for which I've been casting my entire adult life? Is this really a Marvelous Musky, or a Pesky Pike? Will it be gigantic? For in this male-dominated sport, it is all about size. Shocking.
Then something utterly magical happened. The fish leapt into the air, which is one of the greatest thrills a Musky angler can ever experience. He rolled over, and I saw the orange-ish belly. Close to urination. It really was a Musky! Then.  Then.
That bastard ripped line.
And I knew. This was my fish of a lifetime. My mounter. My fabulous, forever contribution to the "beam of fame" at our cabin. This fish was larger than any The Husband has ever landed in his life. I win!
He ripped line!
Fight or flight turned into exhilaration and desperation for me, and pure astonishment on behalf of The Husband who madly reeled his own line in at lightening speed and tottered about the boat to ready the net.
Then every Musky Fisher-person's worst nightmare came true. My beautiful rod, which was bent in half working to fight that fish to exhaustion, a true battle of the wills, woman against beast, went completely slack. And let me just say...if it's all about size for the men of this sport, then a slack line is the antithesis, the total buzz-kill. Read between the lines on this PG-rated blog and you get the picture.
I immediately launched a Temper Tantrum on a Massive Scale that I have never witnessed by either of my children. I literally stomped up and down on both feet in the stern of that boat and repeatedly grunted an extraordinarily naughty two-word mantra. Then I labeled the fish an equally wicked name - in the masculine form, of course - as only a pompous, egotistical male would treat a cultivated lady like me so disparagingly.
Musky Fishing. Concurrently, it is a curiously exhilarating and abhorrently frustrating way to spend a gorgeous Sunday afternoon.
Next came the worst part of the entire ordeal. Talking about it. Rehashing it. Having to hear The Husband's words, which felt condescending and worse than nails on a chalkboard:
"What did you do wrong?"
Innocent enough, it was a legitimate question. Nonetheless, I still wanted to pummel him. Meekly, with a lump in my throat (for real - I did hold back tears, but a lump truly formed) I replied:
"I guess I forgot to set the hook."
I guess I forgot to set the hook. What an idiot! I assumed that it was so huge, hit so hard, jumped out of the water and ripped line - RIPPED LINE - that the hook was in there just fine. I will never, ever, EVER make that assumption again. And a poor, Pesky Pike fell victim to that vengeful resolution 24 hours later - but that's a boring story in comparison.
The Husband kept asking me questions. "How big was it? You sure it was a Musky? Wasn't that fun? Do you want to make another pass to try again?"
I sat in stony silence. And asked him to please stop talking about it. Maybe the next day I'd be ready to discuss.
Two days later, he said: "If I tell you something, promise not to get mad?"
Me: "OK."
Him: "I think that fish was bigger than Mallidis' last fall. I have never heard nor seen of a Musky ripping line like that.
BASTARD! (The fish, not Mike. He's actually a really nice guy.)
Check back in early August for more exciting fish tales that hopefully result in better outcomes. I am insane enough to keep trying.
XOXO,
Angler with Angst
Posted by Jen Czupek at 6:30 PM No comments:

Last weekend, I went to Walcamp in Kingston, IL with 22 Middle Schoolers.

I had the privilege of spending 36 hours with these little creatures.

Learning about love, compassion, forgiveness and mercy. Growing in my faith right along with them. And I can't wait for some more of it. The best decisions I've ever made in my life are timed with a return to God. I've strayed several times, but He always forgives and welcomes back with open arms. And I'm loving learning about the promises He offers through His only Son right along side...

If only Walcamp had Starbucks coffee...what I personally consider to be on that list of wonderful gifts God gave to the earth...particularly to the non-morning types like me. Next year I'll be bringing my own stash. :)

I can't wait to see my kids reunited with their backyard amusement park, sharing their love of the outdoors with good friends while the adults enjoy the show at the back of the boat like this...

Then ending our day on Echo Lake with sibling love that sometimes escapes us in Planfield. Like this...

(notice the heart they unconsciously made with their arms. The Husband says I'm grasping at straws. I say he doesn't see art in everyday life. What do you think?)

Thursday, I'll be reunited with it all.
xoxo
Jen
Posted by Jen Czupek at 11:14 PM No comments:

Upon arrival at our Cabin, there is a requirement. All parties over the age of 21 must consume a minimum of one alcoholic beverage. This used to be a two-drink requirement, but I guess age is getting the better of me - or maybe I've finally collected on the wisdom balance my dad always said would elude me until the age of 30. Maybe in my case it didn't arrive until 38.

Normally we try to leave earlier in the day in the summertime to squeeze a few golden moments out of the sun's final hurrah. But this time? Not so. We arrived at 12:30 a.m., quickly unpacked, sent the sleepy, overstimulated kids to bed and complied with the beverage stipulation.

Templeton Rye. On the Rocks. Pure, unfiltered extravagance that provides a warm sensation to the toe-tips. Mr. Templeton is one of my many lovers. My Husband doesn't mind my wandering eye. Thank goodness, because he might be boxed out if he did. Other objects of my affection include Mr. Sapphire, Mr. Canadian, Mr. Ketel, Mr. Hendrick, and even Mr. Cuervo when I'm desperate or drinking a Long Island Iced Tea - and really getting my groove on while fulfilling the beverage requirement on Arrival Night.

Thank goodness I love to cook, and breakfast might be my favorite meal to prepare. Particularly when the grease does it's job and fixes sore heads from Arrival Night. Today the Husband said that I cook it best. I guess he suffered more from Night Two vs. Arrival Night. Regardless, I'm here to help.

More to come about this trip in the next few days - the weather promises good times over this holiday weekend.

xoxo
Jen
Posted by Jen Czupek at 2:06 PM No comments: