Mr. Musky and I celebrated our wedding anniversary last Saturday with a weekend trip that exceeded our expectations,  starting off with a two hour drive south past innumerable farms while watching a beautiful sunset. 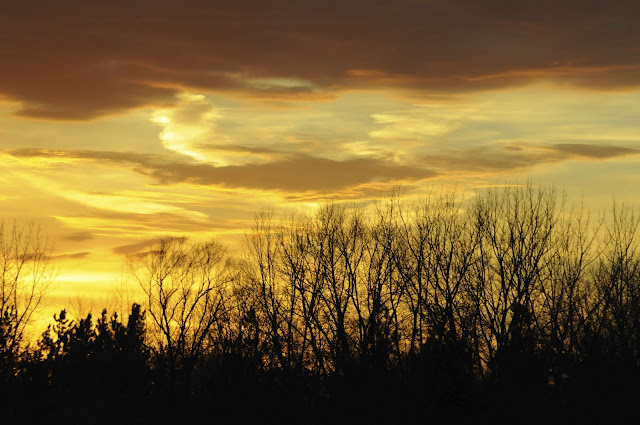 Saturday we kicked the morning off where we first met over 20 years ago. I am forever grateful to my big brother, who scored me a fake ID so I wouldn't have to sit home alone in my dorm room on my first day of college.

Oh - and for introducing me to a certain someone at one of the oldest drinking establishments on campus. 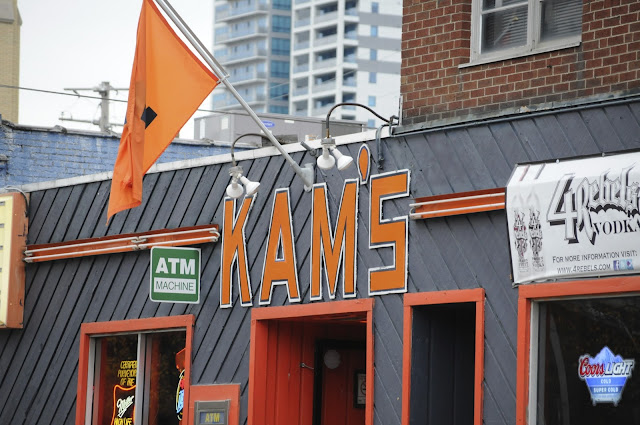 But not the oldest. My father saw me throw back my first beer at the distinguished Illini Inn. He claims it was a bit difficult. Wonder why it's not an issue now? 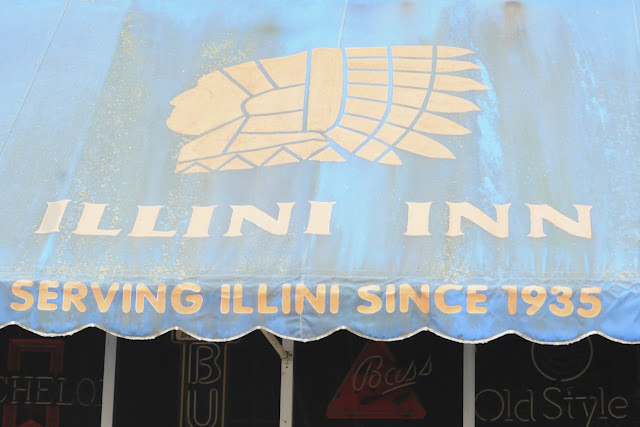 Kappa Sigma's looking good. On the outside, at least. 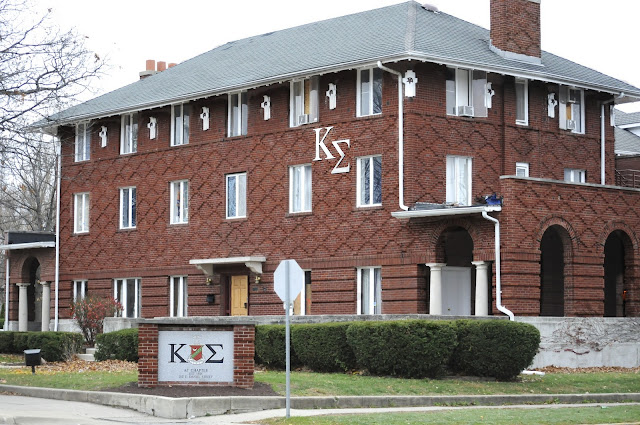 And the Pi Phis are as sweet as ever. So is this edifice I called home for three years. We are brave, we are bold...I know some of you know the rest, but I'll leave that out for now. 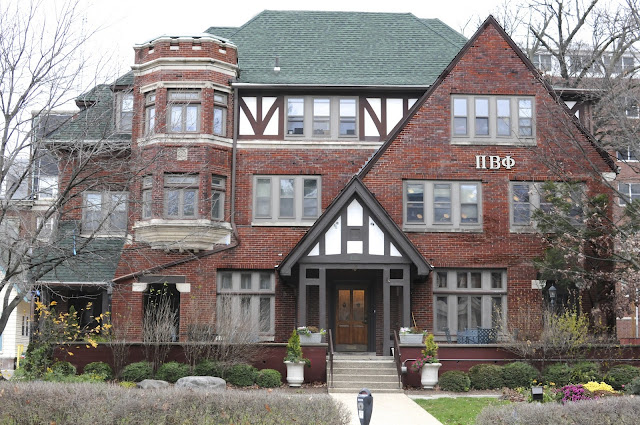 On to the tailgate party, where we were honored and priveliged to celebrate another milestone - our friends' father's 70th birthday. The brightest of this fabulous family is loyal to our beloved Alma Mater, but others hail from some other school situated north of the state line. And the Birthday Boy remains impartial, at least in terms of the shirt he dons. 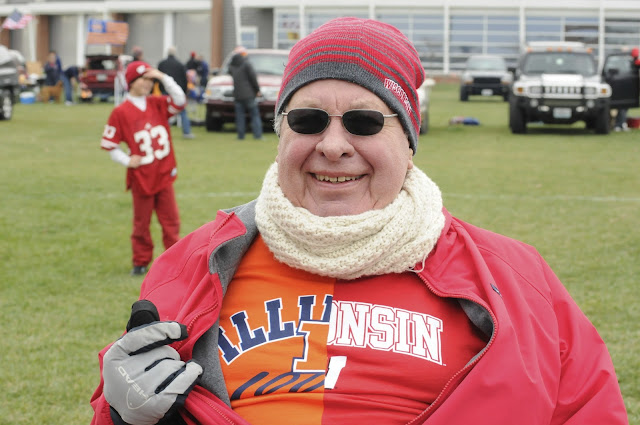 These parents are among the best I've ever known. It was such a treat to celebrate with them. 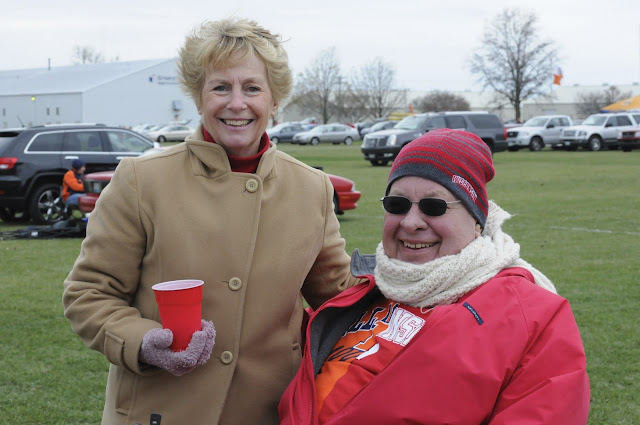 Their kids are a riot... 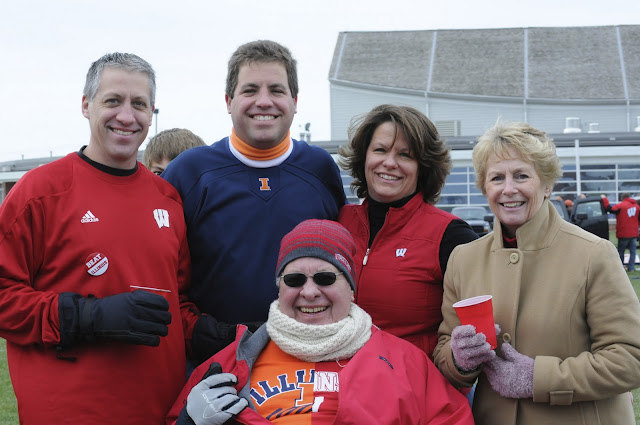 ...and their extended family just flat out rocks. 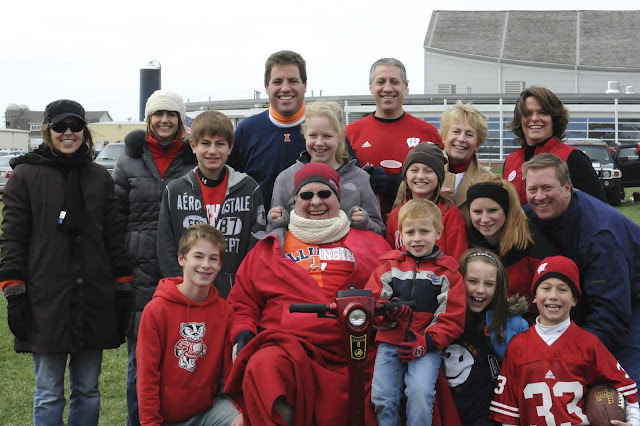 Our kids had a blast the entire weekend, and proudly represented the Orange and Blue. With a little red and black mixed in. 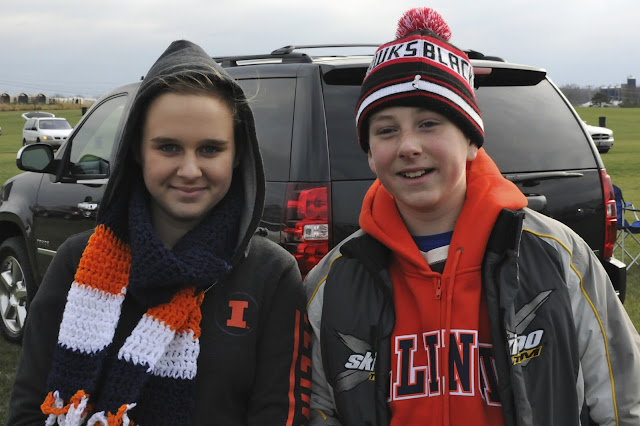 Thank Goodness they had a little help from Mr. Musky's cousin, who is a sophomore, and some of his friends. 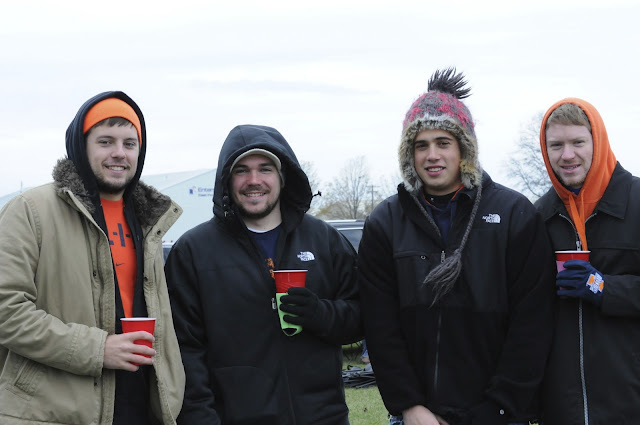 As game time approached, we giggled at the Camp Randall Jump Around efforts. Or at older sisters who can still beat up little brothers without punishment from Mom and Dad. 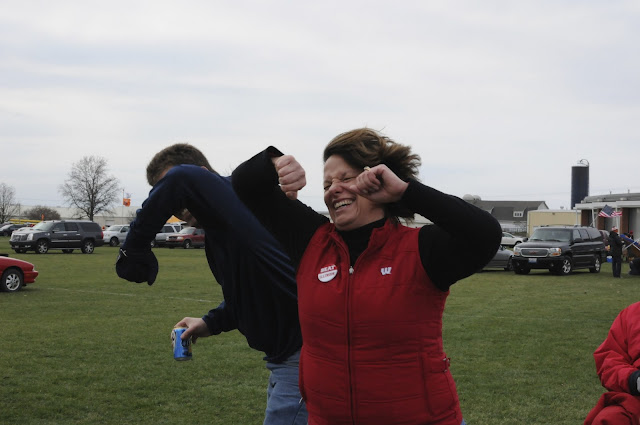 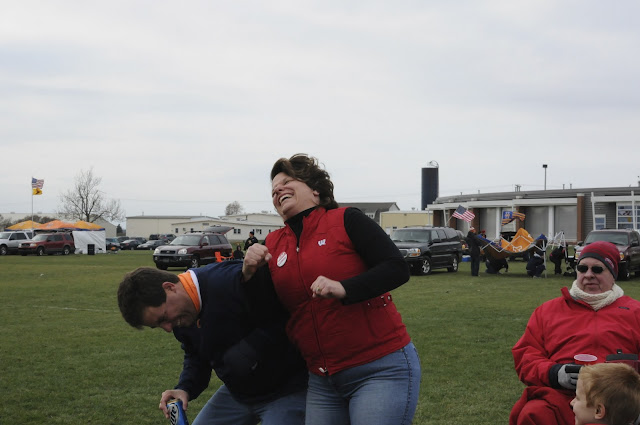 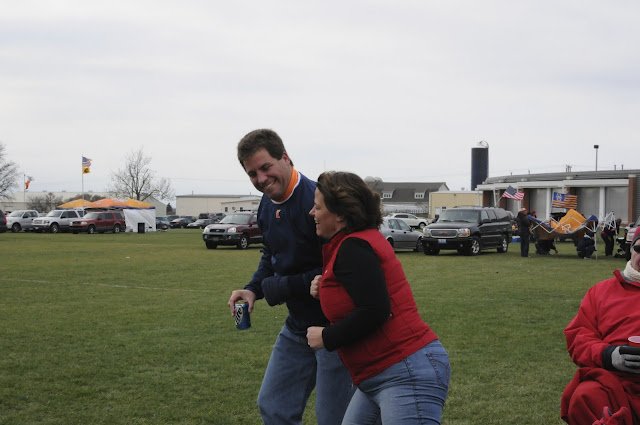 Followed by the a message from the smart little brother to his Badger relatives. 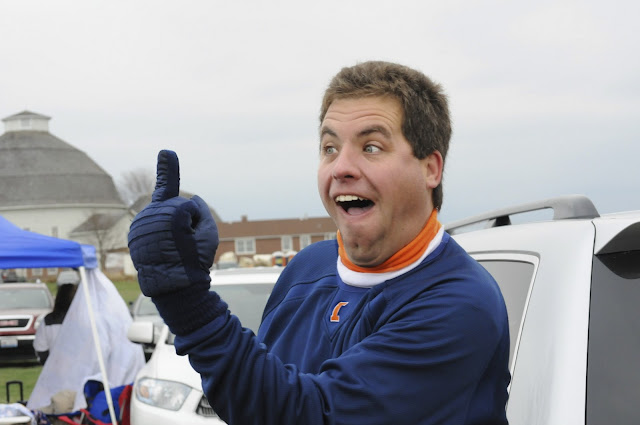 Mr. Musky roomed with this gem his senior year, and the stories are numerous, outrageous and hysterical. We enjoyed digging some of them out of the vault over the weekend.

On to the game, which was every bit as fun as it was when we were undergrads. 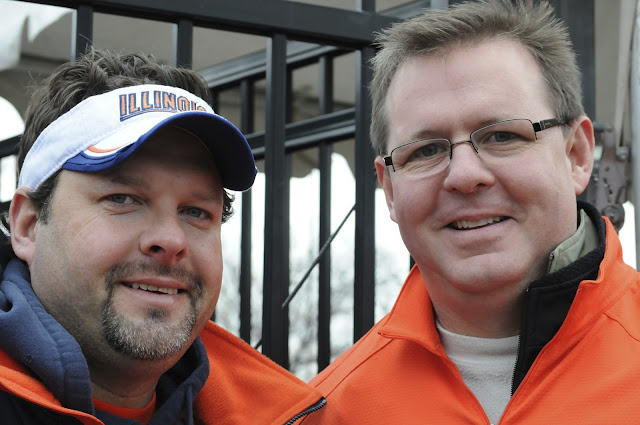 Um...yeah. Our seats were never this great when we were poor college students. 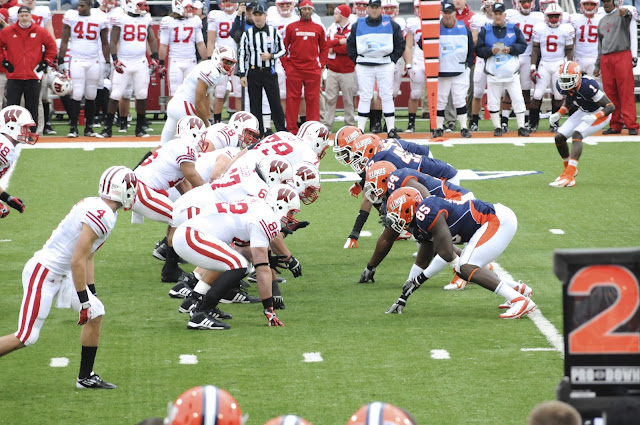 Coach Zook. Should he stay or should he go? 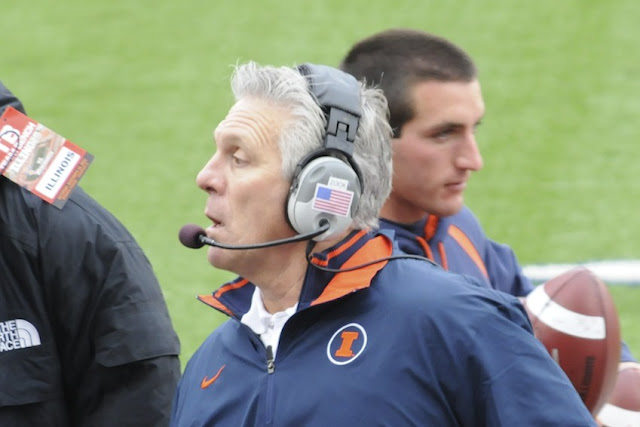 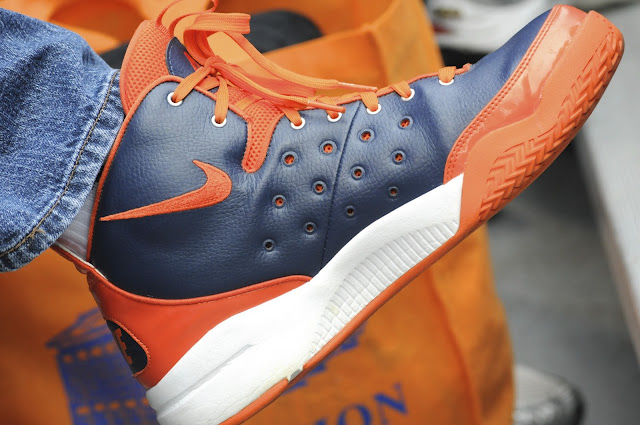 I still get goosebumps listening to the Three in One and will go to my grave saying there is nothing better than singing Hail to the Orange linked arm-in-arm with your comrades at halftime. But it just is not the same without Chief Illiniwek. 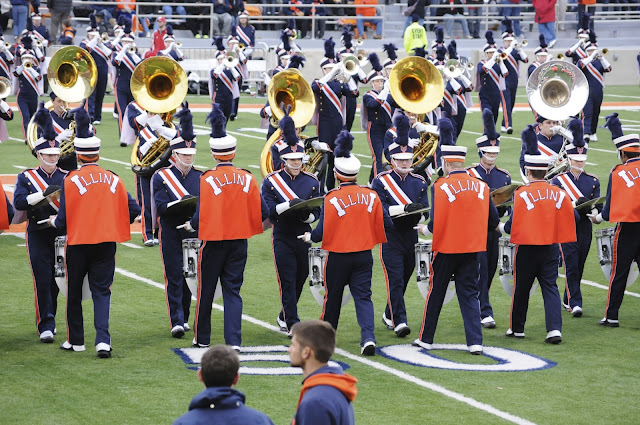 Thanks again, Brother Bear, for paving the way for me at the University of Illinois and for introducing me to your punky, younger friend. 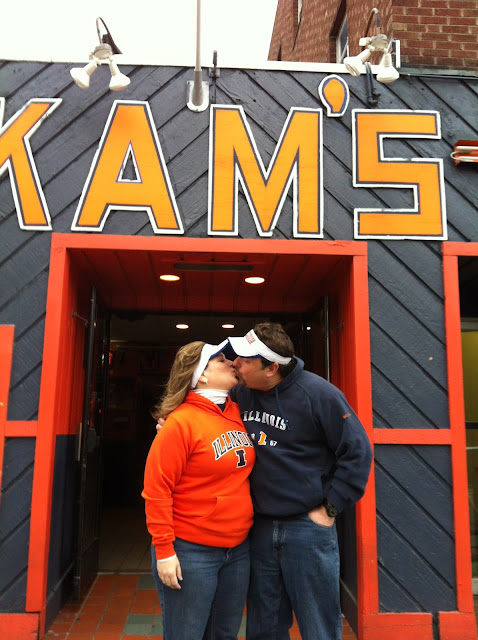 I'm off to bed to enjoy a day I've been looking forward to since October when that aforementioned Match Maker announced that his family would be flying in for Thanksgiving this year. I have a sneaking suspicion that there will be a story or two to report after paying homage to the Turkey later today.

Happy Thanksgiving, everyone!  I am truly grateful for every one of you who read my nonsense.