For all the Farters and Hockey Fans Out There...

A few weeks ago after a mid-week Lent service, we dashed home so my son could perform a Clark Kent-like wardrobe change for hockey practice. We leapt back into the car in record time and raced our way to the rink to the sounds of Fall Out Boy's "I Don't Care" - you know, pump-up music. On the highway, I noticed a truck pulled off the side of road so I maneuvered into the middle lane. Jake softly muttered a single word.

"Wow, Jake. You're really starting to understand the rules of the road. How did you know that I needed to pull into the middle lane with that truck pulled off to the side?" I wondered aloud, so proud of my son's advanced intellectual capability.

"No. I don't know. I have no idea whatsoever what you are talking about," thinking that maybe he isn't so bright after all.

"Never mind," he sighed, clearly exasperated with my denseness.

This happens often when I hang out with the kids. My first reaction is to retreat into the grey cozy matter of my nearly 40 year-old skull and ignore the silly ramblings of the future generation of our world. I am comfortable in my skin. I understand and accept that there are things my children know and experience that I will never fully comprehend. And sometimes, I just disengage. But then there are times that I realize I may be missing out on a true bonding moment with my child, and it may spark further dialogue so the patient, kind, would-rather-be-noplace-else-on-earth-than-driving-to-hockey-at-9:00p.m.-on-a-weeknight mom took over.

"What exactly are you talking about? Please. Tell me."

"It's when you fart. If you call safety before your friend smells it, you're legit. If they call doorknob first, then they can punch you until you touch one."


I was totally baffled. How did I get so off topic? From avoiding roadway vulnerability to protecting oneself from a pummeling based on gaseous exertion? What in the HECK was he talking about? Doorknobs and punching and safety? What??? Rage against the Machine blared "Testify." Never mind we were singing praises to God twenty minutes earlier.  I never felt so disconnected from teenage reality in my entire life. I suddenly became 15 again and had an incomprehensible need to understand so I wasn't the smart goody-two-shoes geek who didn't get the dirty joke while everyone else laughed and pointed at me.

"So let me get this straight. I fart. You smell it. You call 'doorknob' and punch your poor Mama for no other reason than I didn't utter the word 'safety'?"

"Mom you can't say that word!"

"Because you don't say it right."

"Why? I say it just like you!" In a dark closet in my mind, it occurred to me that I was whining to a 12 year old about fitting in. I mentally reminded myself to look into counseling the next day.

"So if I don't stress the second syllable, I'm cool?"

"Can I blog about this?"

I offered him my fist. For a punch. Er, I mean, fist pump. After knocking knuckles, my hand exploded, jazz style. Oops - I forgot. They haven't done that in, like 6 years. Duh. I'm so outta touch.

After practice, I asked Mr. Musky if he'd ever heard something about doorknobs and farts. I needed to link arms with another intelligent, responsible, tax-paying adult who will someday join me as we shake our heads in disbelief in the nursing home cafeteria about the offspring we procreated to rule the earth as they run to touch the nearest doorknob.

"Oh -  you mean safety? Yeah. Me and Colin played that all the time growing up."

Good grief.  Maybe my son is not just an immature, flatulence producing pre-teenager who happens to be blessed with great skin. Maybe he's just a bit more worldly and mature than I give him credit for. Like when we recently attempted an overnight snowmobiling trip but our plans were dashed by beautiful, sunny 50 degree weather in February.

I thought about lemons a lot that weekend. And how mother nature donated a whole bushel of them to us, ruining our plans. And how I hate the phrase, "When life gives you lemons, make lemonade." It makes it sound like we should just accept the ordinary in life and move on. I prefer my wise little son's comment:

"You know Mom, substitution is key."

He said this while doing something I would have thought unthinkable for him or any other testosterone-filled hockey player. He said it when he skated... 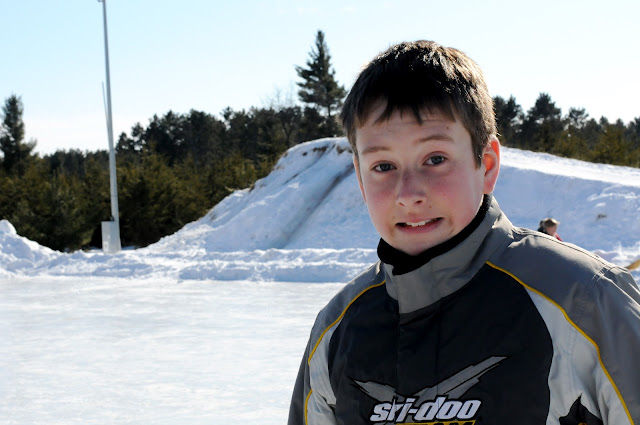 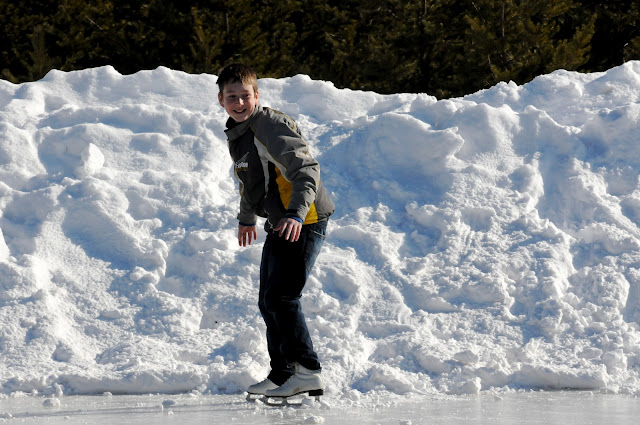 In his defense, we were not out snowmobiling as we had planned; instead, we went hiking and happened upon an outdoor rink. Disappointment clouded his face when he saw the opportunity to shoot a puck around but didn't bring his hockey skates. We went into the warming hut and found skates for the general public to use, but the only ones that remotely fit him were the white ladies' figure skates. Determination overruled fashion and he insisted on skating.

Figure skates' toe picks proved to be a challenge for him (hockey skates have no such creatures), but he overcame. 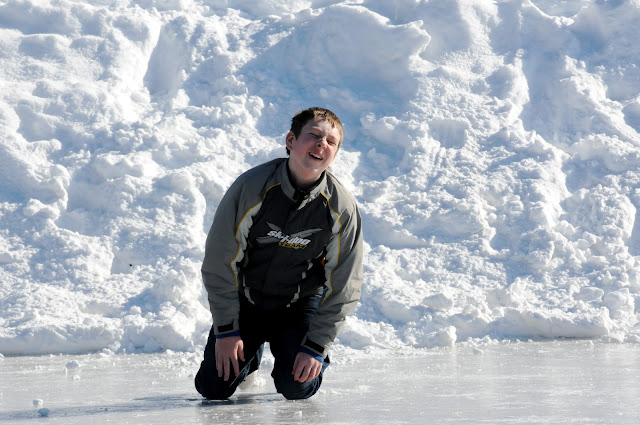 And ultimately enjoyed himself, substituting yet again - a broom for a stick. 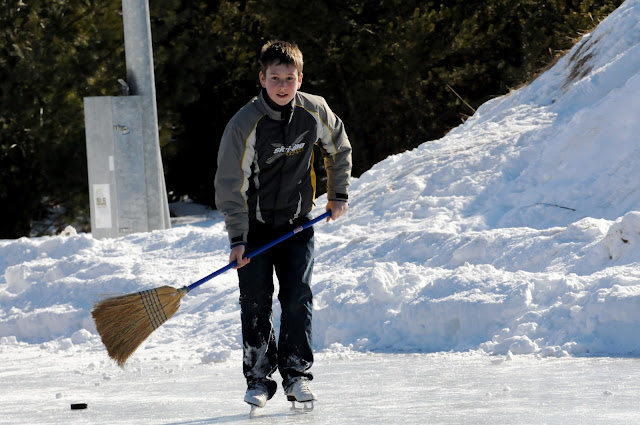 But he prefers hockey skates. 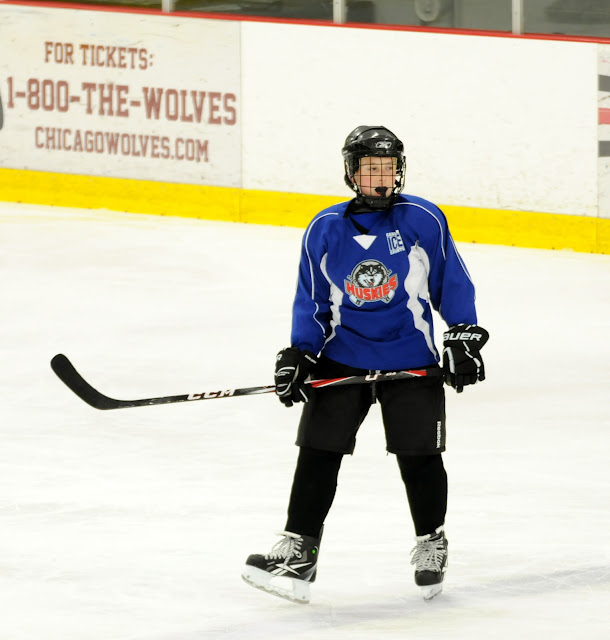 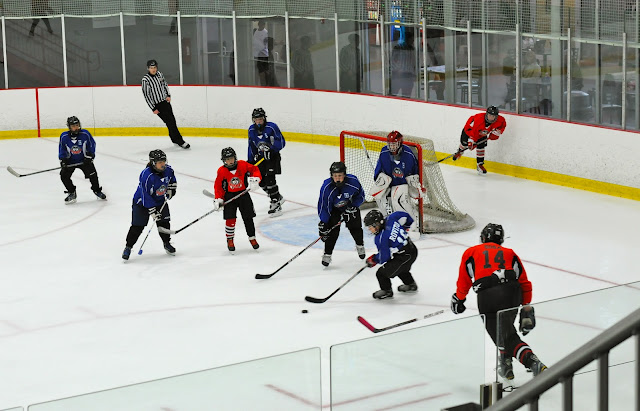 So this got me wondering. Did he react as most would? Would other young boys have done the same thing? What about the grown-up hockey players that I know? So I conducted a little survey of sorts. Here was the scenario I posed to several of my friends:

Imagine yourself alone on a winter hike through the woods. The day is brilliant - it's about 25 degrees absent of all wind, and big, puffy flakes drop from the sky creating a serene winter wonderland. You unexpectedly approach a clearing along the path and find an isolated, outdoor skating rink with an unbelievably smooth surface complete with goals at each end and a hockey stick and puck lying on the ground. You look around and don't see another soul anywhere nearby. Unfortunately, your hockey skates are not among the various survival items in your hiking backpack. You spy a warming hut nearby and wander in - and inside on the shelves are rows and rows of sharpened skates in every size from toddler to adult with a sign that says: "Free for all to use, courtesy of the Department of Natural Resources."


Every pair of skates is white. They are all brand new figure skates.
What do you do?

From a young hockey player: "Hmmm...I would go on the ice in my boots and shoot pucks. You never know if there are any secret cameras around!"


And another young hockey player: "I'd change the blade to a hockey blade and skate."

And another: "10-20 years ago, this would have been a tough call. However, I am now *gasp* 40 years old. Not only would I wear the white figure skates, but I would wear pink figure skates that read "I'm Gay" on the sides."


And another: "The barbarian in me says -- I start a fire. While it is burning, grind the toe picks down on rocks. I use the soot to make the skates black if that don't work I put some dirt on em. In reality, who cares? Ice is ice and hockey is hockey - lace em up and shoot the puck. Good things always happen when you put the puck on the net."

From a 50+ year old hockey player: "You sure none of my teammates are around? Because I don't know if I'd ever live it down. You ought to hear em in the locker room when a new hockey player tries to come into our league. They're brutal. I'd scour the place to make sure they aren't there, and I'd skate."

And another, former player: "Find a rock and grind off the front end of a pair of figure skates as much as possible because I will for sure keep tripping over the front part. Find some duct tape to add support to the ankles if possible. Then grab the stick and start messing around. And since I played hockey there would have to somehow be some cold Canadian beers laying around in the snow bank. Trust me - they would be there."

Well Amen to that.

In Chicago tonight, we're pulling out all the rally monkey stops. Even our canines are channeling their inner cheerleader for a win. 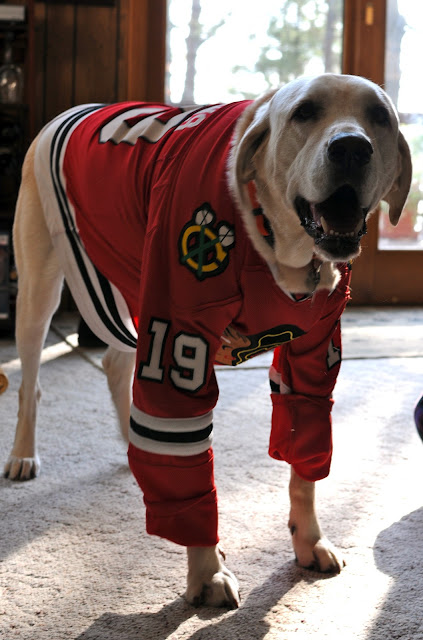 Go Blackhawks, and remember - call "Safety!" if you fart tonight.