Three weeks ago we spent another glorious Memorial Day weekend at the cabin. The sun winked its way through puffy, cumulous clouds and the occasional rain shower kept things cool and breezy, just the way we like it. Our 2012 inaugural boat ride did not disappoint. After packing beach bags with enough towels, snacks, and cocktails for the Russian army to join us, not to mention a deck of cards, sunscreen, bug spray, beach chairs, floaties and music speakers, I fulfilled the final boat excursion task - bloody marys for the adults. By the time I made my way through the backyard and down to the boat, the dog called me canine female names, the kids grew annoyingly restless and Mr. Musky blared the horn in a failed attempt to move me along. Upon leaving our dock, I collapsed onto the front seat, sucked down my cocktail and closed my eyes as we warmed the engine up over our serene little lake. With the crisp wind blowing through my hair and the freshwater lake smells carrying me off to my happy place, I dropped my shoulders a bit and felt myself truly relax. As we headed toward the channel to the next lake a "Loons Nesting" sign warned boaters to keep their distance. Mr. Musky commented, "That's new, isn't it?"

Less than a minute later we realized why the new sign was posted. And for once, the camera gods were with me. Normally when a photographic moment presents itself I am all limbs askew and hot mess defined as I barrel my way through multiple bags to locate the camera, usually tripping over the dog, stubbing a foot, breaking a toenail and spurting blood all over the boat in an effort to calmly capture the fleeting natural miracle.

But this time, perhaps because Mr. Musky saw a bear on his way into town the day before, I was prepared. I actually had my camera OUT and ON MY LAP outfitted with the ZOOM lens and I was ready.

As we turned the corner into the channel, we spied a loon sitting on its nest, just biding its time until the babies are born. While I'd love to say this is a mama, I can't. Papa loons share in the building of the nest and in the important 28 day job of incubation, so this could have been either parent.


We did respect the nester and kept our distance, but my 39th birthday present of a 300mm zoom lens proved very helpful to see this majestic bird up close. 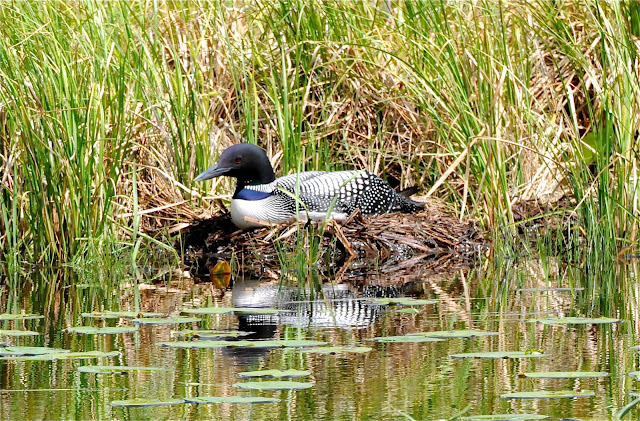 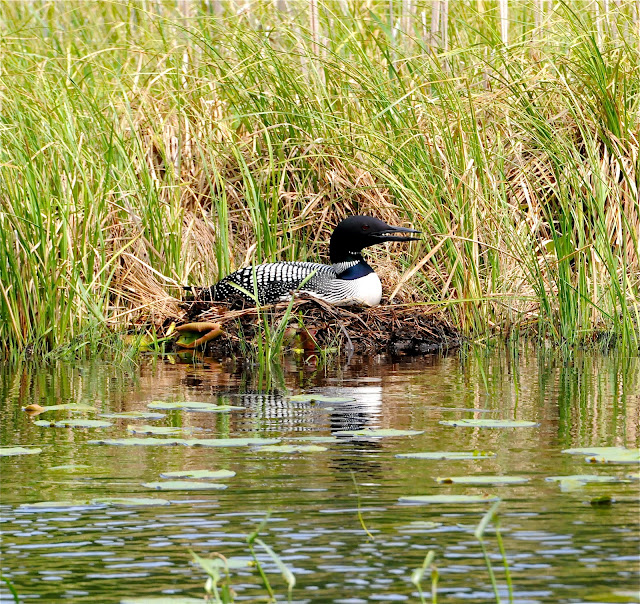 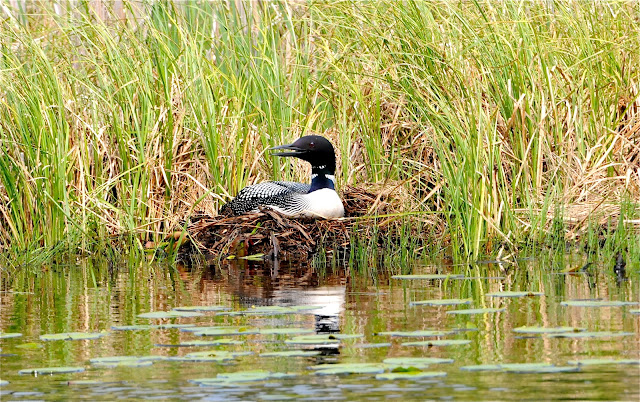 We've always had a pair of loons on our lake, and ever since I was a child visiting my Grandma Kahling's place in northern Minnesota the Common Loon has been my favorite bird. Their haunting, magical call lulls me to sleep at night and stops me in my tracks mid-day. There's just no other sound on earth like their call to one another, communicating their whereabouts on opposite ends of the lake. Their defensive howl is the stuff horror films are made of, reserved for dangerous situations or when an interloper, or a lake-less loon, tries to invade the established pair's territory. Oftentimes I'll have just one more cup of coffee in the late morning on the dock in the hopes that they'll feed close to our shoreline so I can marvel in their graceful swimming and diving abilities, and maybe even catch them feeding their babies.

I can't wait to see the 2012 Echo Lake Baby Loons. Hopefully this weekend.

From Echo Lake, we have access to four other lakes. Chain Lake is to the Northeast on one side, and Stone Lake rests to the Southwest on the other side. From Stone Lake we can access Sand Lake and Dam Lake, the two largest bodies of water on the Sugar Camp Chain. We almost always go to Stone Lake on the pontoon boat, merely because the canine would cry real tears if we didn't stop at the Stone Lake Beach after riding through the first channel. He stands at the front, by the little door to allow him off the boat, and literally shakes with anticipation and excitement. He cannot contain his glee, knowing full well where we're headed. About halfway through the channel, he is overcome with anxiety and begins whining and yipping and scratching at the door, begging his humans to move faster through the shallow channel.

But unfortunately for him we had to slow our roll this time. Not just for the nesting loon, but for another majestic bird overhead. At first we thought it was an eagle, but it didn't possess the trademark white head, yellow beak and brown-black feathers. This guy was all brown spotted. He (she?) stopped for a bit on a treetop so I snapped some pics to practice shooting birds in flight (extraordinarily difficult) and to check it out later online to figure out what type of bird it was.

All that said, I apologize for the blurry shots here. But you get the idea. 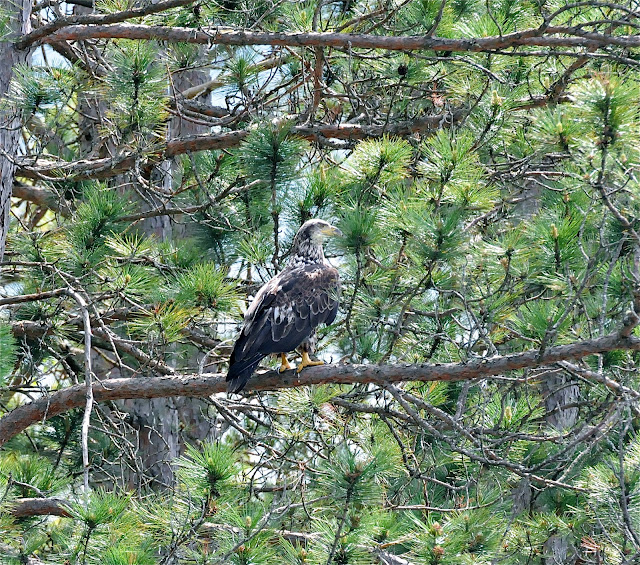 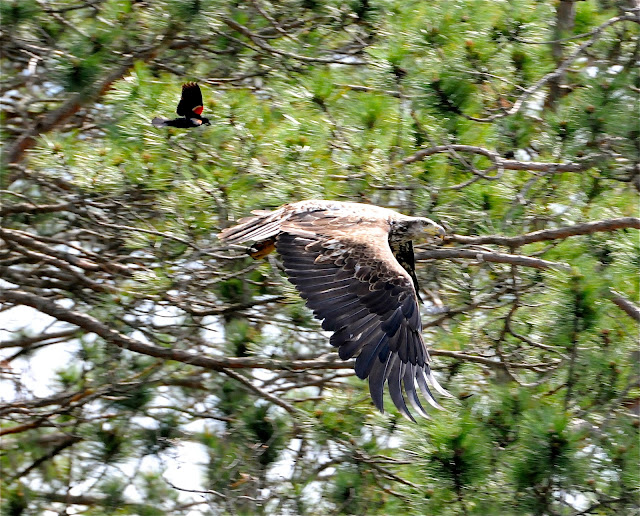 The answer? After cocktailing on the deck and looking at all sorts of birds of prey, Mr. Musky figured it out. This one was an Immature Bald Eagle, thus the mottled brown and white feathers. In the ensuing Ornithology session, we learned that our neighborhood raptor will assume the characteristic white head and tail feathers when it becomes sexually mature, usually around five years of age.

Who knew? Probably tons of you out there, but not us.

Through the next channel on our way to Sand Lake, what do we see? Yet another loon, on its nest, waiting for another set of babies to enter the world. This one was on a little island in the channel, and will be residing on either Stone Lake or Sand Lake - it's nest is equidistant from the two. 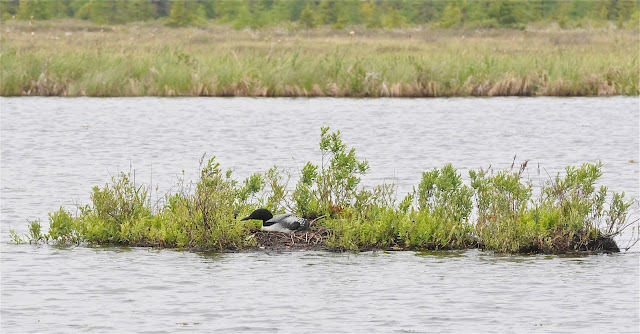 And the biggest baby of them all? Loved his first swim at his beloved beach. 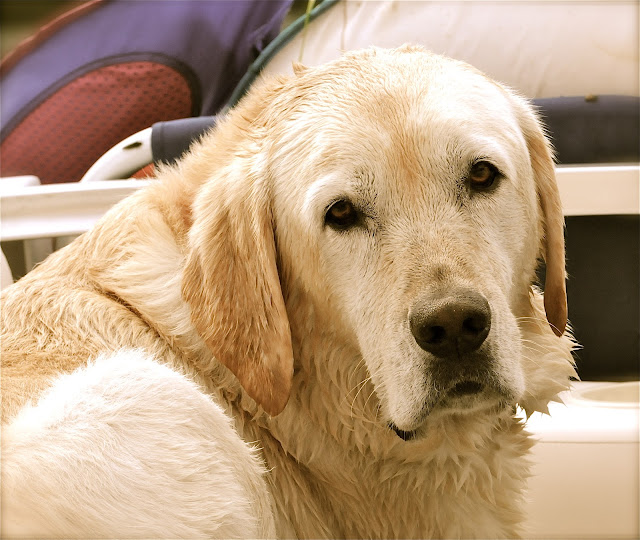 We are headed back up North this weekend for some celebrating. And I hope that celebrating includes some new babies that I can photograph and share with you next week.

Happy happy to all you Fathers out there on Sunday. You rock our worlds.