Believe you me, I have a humdinger of a fish story to tell. I'm working on it. But I live with teenagers. And you know what teenagers are not?

Patient. Especially when it comes to seeing the photos I took of them yesterday. They want them posted to Facebook so they can all tag each other "like, last night." So instead they get a blog post. Like, today.

Yesterday we spent the warmest, almost longest day of summer at West Beach in the Indiana Dunes National Lakeshore. The morning dawned with the news that our driver blew out her tire the night before, so we immediately enacted plan B and I swapped out cars with Mr. Musky so we could fit all the little devils in the back of the truck, along with a couple of coolers filled with snacks and drinks and food. Because if I'm making the effort to go to the beach and am coping with sauna-like conditions and grainy, sticky sand that will fry my feet as I walk to the waters edge? I'm getting me a sunset, dangit. While I dream of snowmobiling across a frozen lake in January.

After wrestling with giant monster portable seats that do not easily fit into our Tahoe by a certain 40 year old woman who typically does not do seat insertion in 97 degree weather - especially when one of her rug rats approaches her with the delightful news that he just broke his sister's iPhone screen - we were off to a rocky start. We picked up my friend Kris, her daughter and another teenager and thanked the heavens that the expressway to the beach reopened after a brutal accident that morning which threatened to thwart our already tenuous plans.

Finally, we arrived. We channeled our inner pack mules and trudged coolers, beach chairs, an umbrella which proved entirely impractical in the 30mph wind and scores of blankets and towels to a spot near the water. After burning blisters onto my sandaled feet from the scorching sand, I flung myself into the shocking 68 degree lake. I do love swimming in the great lakes. It takes "refreshing" to an entirely new level. The girls lasted about 5 minutes before declaring they wanted to go for a walk along the lakeshore.

Which in girl speak is, "There are no cute boys near our beach spot. We're going to go see if any exist in Indiana." 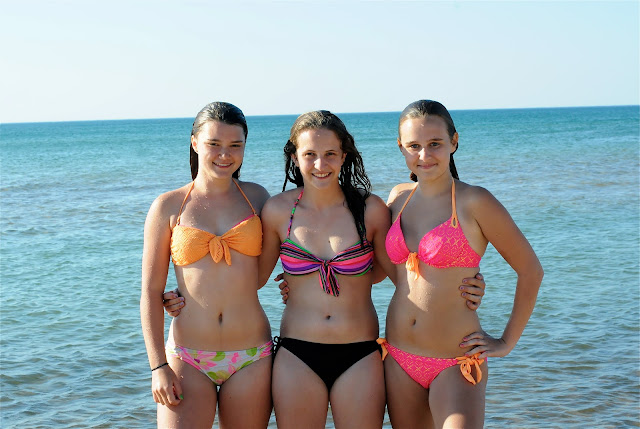 We weren't born yesterday, girls. We get you.

Meanwhile, Kris suggested we go for a walk amongst the dunes. My inner crybaby raised her eyebrow. Walk? In that disgusting exfoliation matter which exceeds the boiling point? No, thank you. I'm hot. My feet are still on fire. A walk will guide me away from the quenching properties of Lake Michigan. I would rather sit and bask in the sun and cool off in the ice bath in front of me versus wandering away from the only reprieve available between my current position and the AC in the truck.

"Sure," he readily agreed.

So they walked, and I hopped. From one shadowy spot to another. Which were few and far between at three o'clock along the Indiana lakeshore, despite the efforts of the Marram and Little Bluestem grasses to help me out.

The landscape though, I forced my inner crybaby to admit, was worth seeing. There's this thing? Called the Ice Age? It left behind some pretty remarkable stuff. 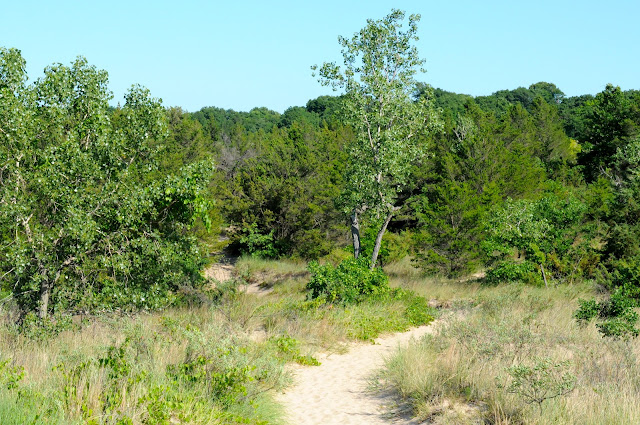 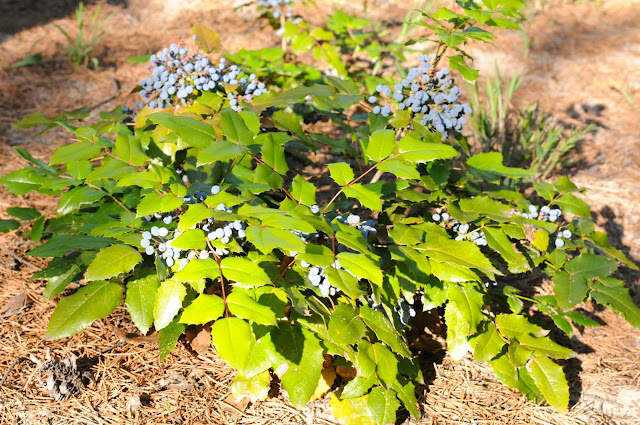 ...and Bearberry plants, dropped off this far south thanks to the glaciers that gave them a ride before receding to the north and east. Now these out-of-place vegetative species help hold the dunes together so packs of teenagers can go exploring. 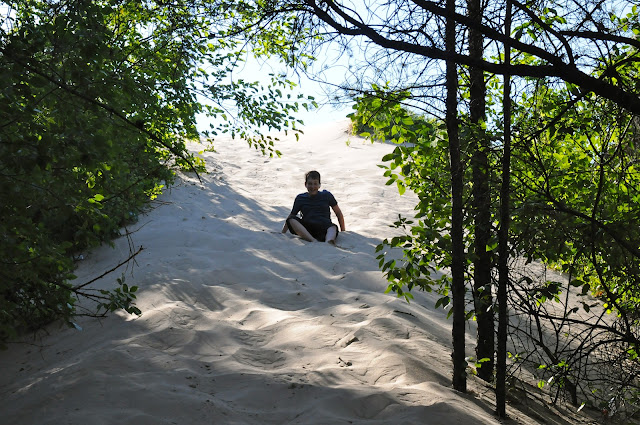 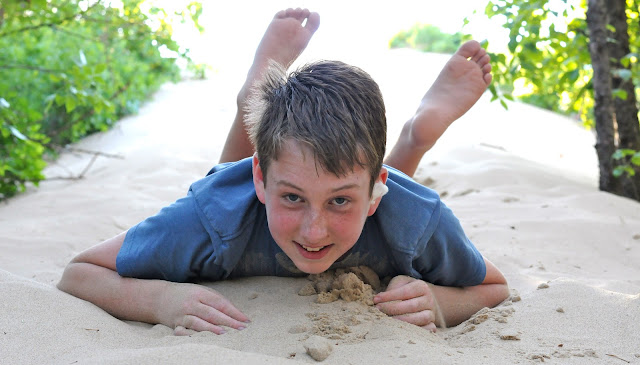 Inner crybaby raised her other eyebrow. Umm...Ms. Forty-Year-Old...do you know this is not easy? Climbing a 45 degree angled dune? Hello...does the term "lactic acid" mean anything to you?

But...as a card I received for my birthday so eloquently stated..."Forty is old enough to know better and young enough to do it anyway." So up the hill I climbed.

With a few stops for the inner crybaby to gnash her teeth. And bellyache. And catch her ever labored breath. And rest. 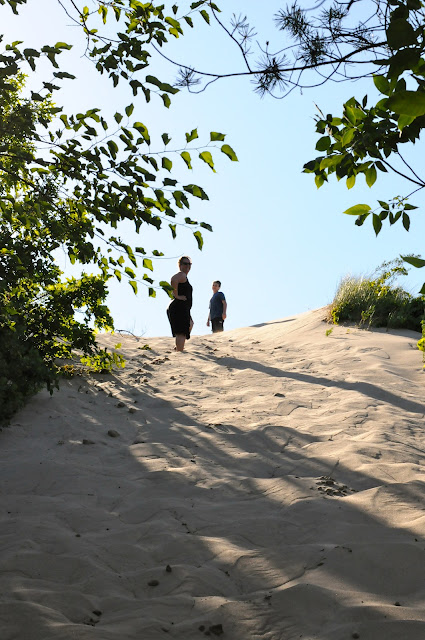 Mostly to rest. That hill's a mutha.

But look! Ms. Forty-year-old triumphed and squashed the inner crybaby! She made it to the top! 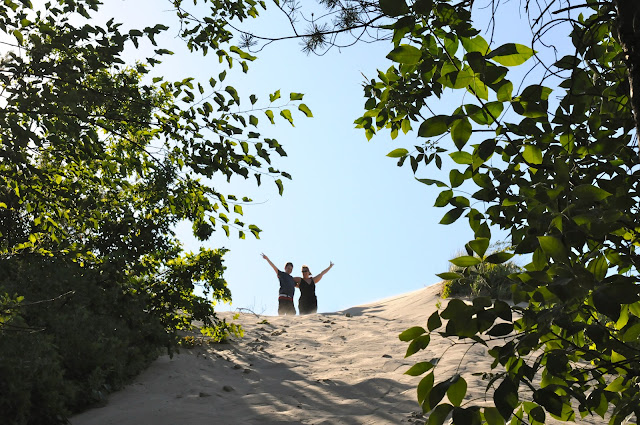 To take in a marvelous view. 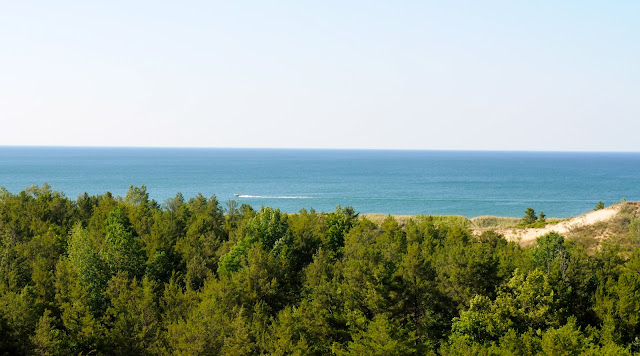 And run back down with her baby. 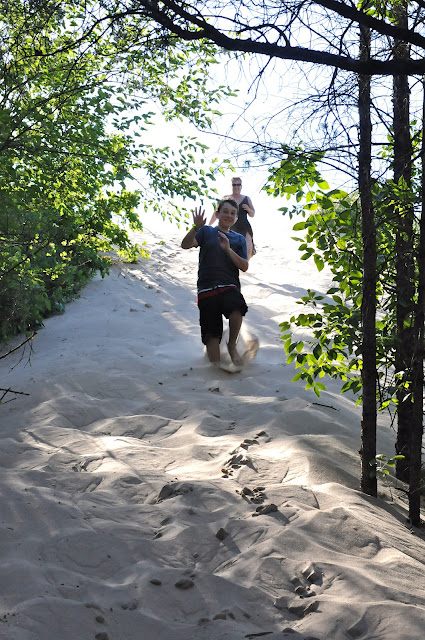 Climbing sand dunes hurts. A lot. But the view at the top and the dash back down is worth it. Ask my friend Kris. 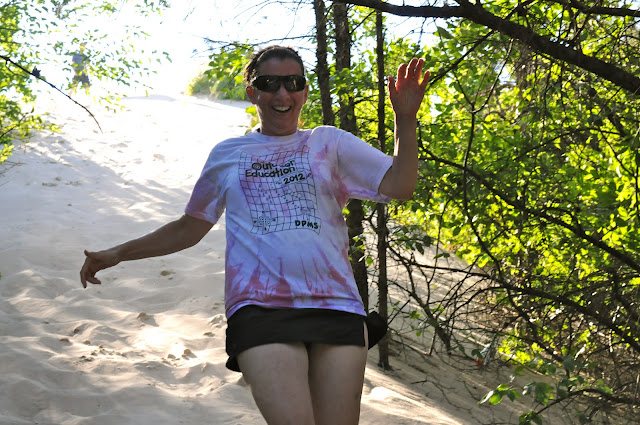 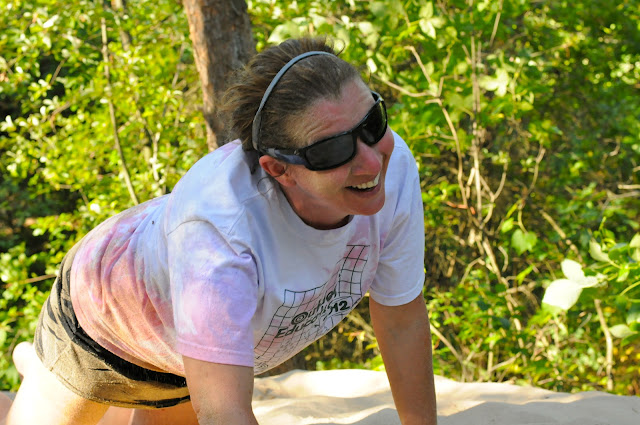 Meanwhile, back at the beach, a certain trio of troublemakers commandeered the lifeguard stand. 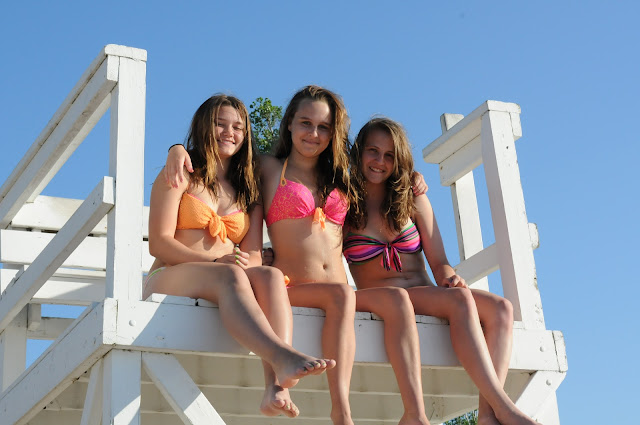 The sunset finally delivered, and the kids delighted in creating some silhouettes. 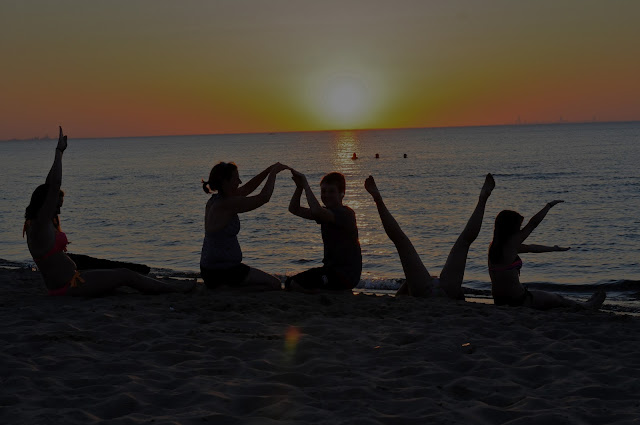 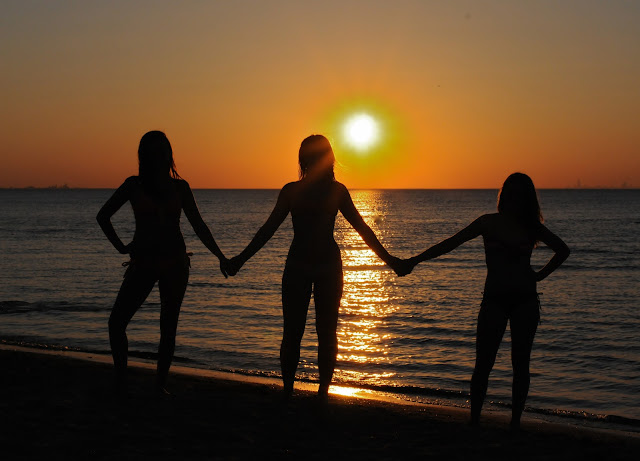 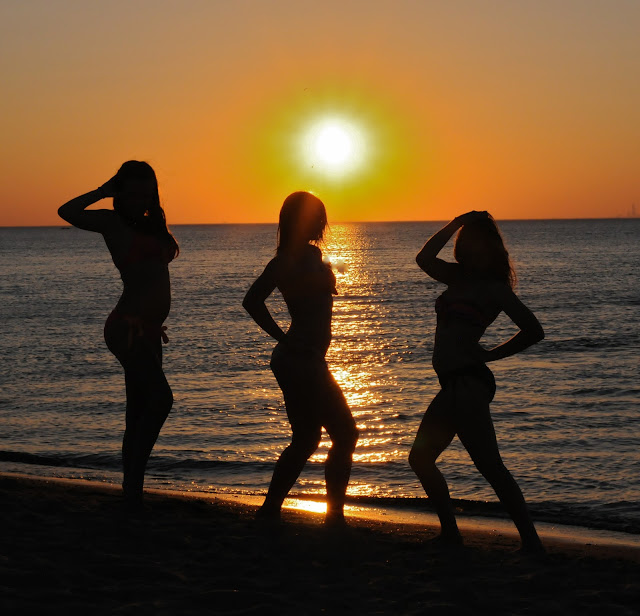 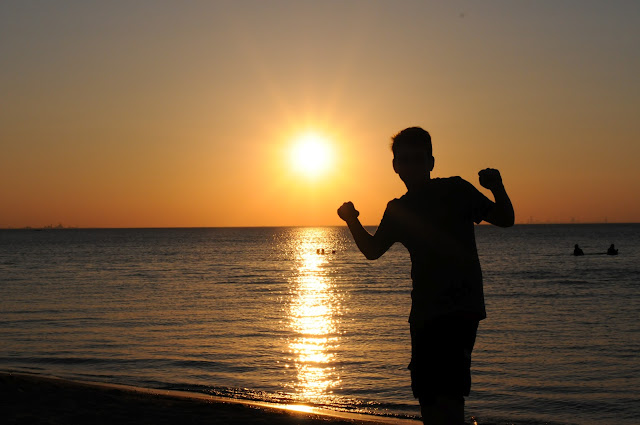 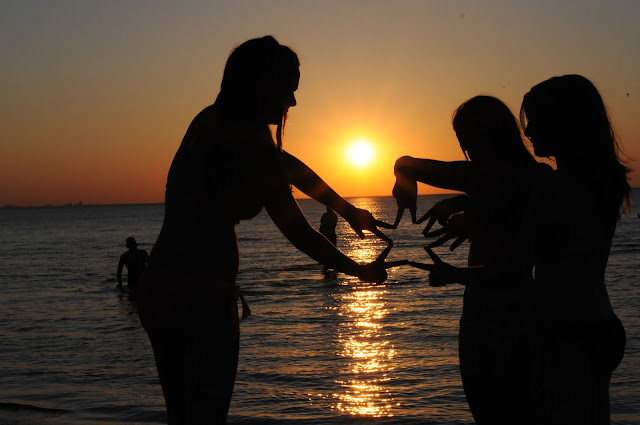 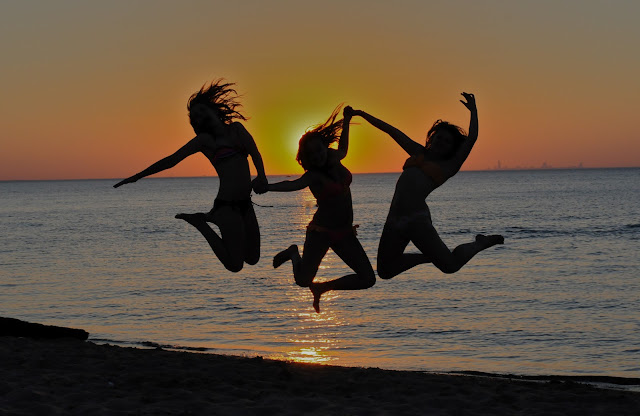 Happy Summer Solstice, people. And thanks for reading. 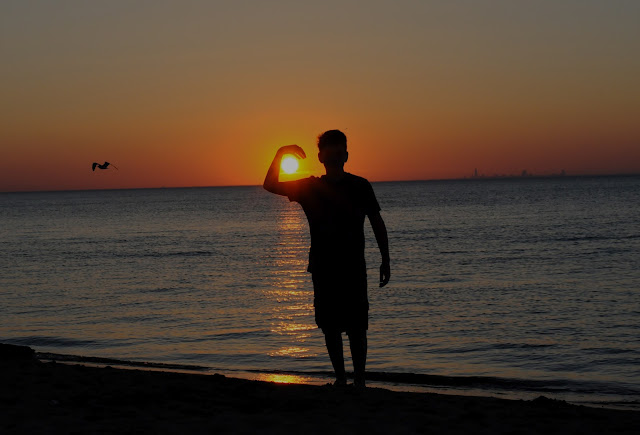