When we dated and were first married, I declared to Mr. Musky that I wanted three kids. I'm not really sure why, other than I came from a family of two and perhaps I thought it would be nice to have a baby brother or sister to go knock around with when my older brother ignored me (daily). Regardless of my inane reasoning, my devoted and adoring husband agreed that yes, three children sounded like the perfect number.

Fast forward. Our daughter threw us into parenthood a bit earlier than we expected in our twenties. We were fully aware of how these things happen, but let's just say that while we definitely wanted children, we thought it would happen a bit later in life for us. Then delightful unplanned pregnancy number two came along, and a very temperamental baby boy launched us headfirst into "the dark years."

The Dark Years were wonderful. Our healthy children grew and flourished, but we can't remember a thing we did during that time. BK, or Before Kids, Mr. Musky could tell you the score of all major sporting events, how we celebrated any given holiday, or what we did for vacation every year. And I looked rested every morning and bounded out the door, ready to conquer the telecom world. But those trivial talents vanished in the air with the arrival of our son, until he turned about five years old.

That's when we bought the cabin in the woods, and that third child came about.

On a beautiful fall weekend seven years ago, Mr. Musky unexpectedly announced to me that a dog might be fun to have Up North - someone who would go fishing with him and faithfully follow him around while chopping wood, then lounge by the fire at night while he sipped a hard earned cocktail. Realizing that my window was but a mere sliver, I made some calls the next day. When my darling husband came home that night, I informed him that a woman from the country...Amboy, Illinois, to be exact...was on her way to our home with thirteen labrador puppies.

He stared at me, dumbfounded.

They tumbled in the front door, and five of them immediately identified our brand new entry-way rug as a chew toy. Three others dropped a dump in the living room, two peed in the dining room and the three remaining beasts took off to see what they could snarf down in the kitchen. We all stood around, slightly panicked, looking at one another wondering what in the heck we were supposed to do.

"Grab a pup, and bring them all downstairs to the basement!" Determination ruled that I save my house.

So Kahley, Tony, the farmer's wife and her daughter all scooped up furry balls of fluff and headed downstairs. Jake held the door open for us, his eyes the size of golf balls. He realized that his position as baby in the family ended when fifty-two hairy legs bounded into our entryway.

In the basement, the puppies wandered everywhere and climbed all over us. Regretting his suggestion to expand our family, a feverish Mr. Musky asked the farmer's wife which one was the calmest. She considered the one in her lap: "This one seems pretty content." 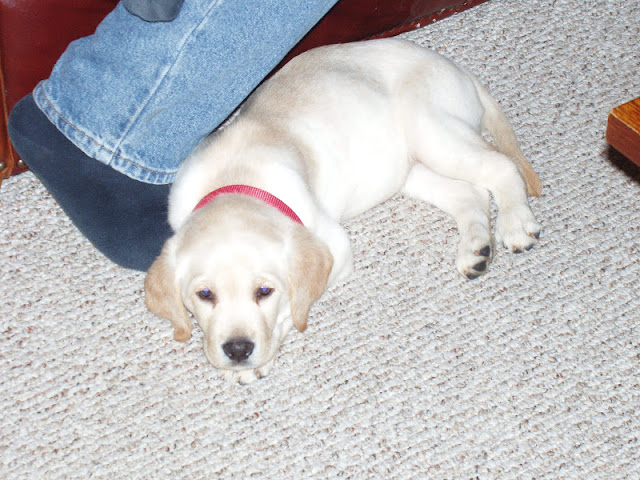 Only because he barked like a lunatic for the two hour car ride and she slipped him a quaalude before entering our house. Regardless, we wrote her a check for $300 and she ran off with her child and the other twelve puppies faster than a man free-falling to earth from outer space, never to be seen or heard of again.

Mill Mill, to put it mildly, was not a calm puppy. Sure, he was cute and all, but we had no idea what we were getting ourselves into.

He came to us with worms. Gross. 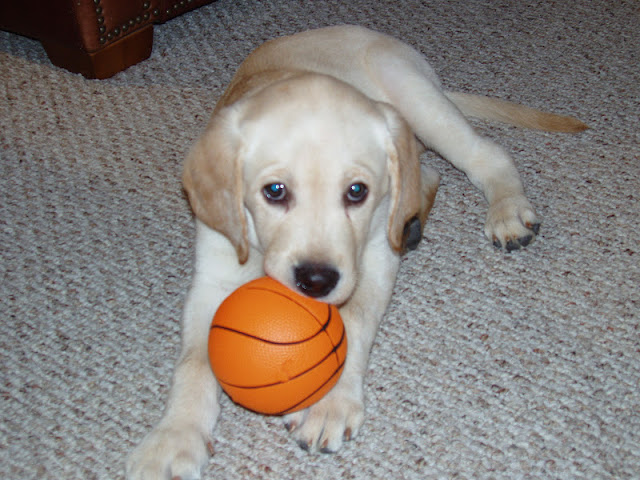 He ate things. Like canvas bean bags and tube socks. Together at the same time. Wolfed them down, resulting in an expensive little sleepover at the animal hospital. After his first surgery, he relegated himself to kid socks, and faithfully puked them up in the car ride home from the cabin. Or on my friend Carrie. Or in the corner of any carpeted room. Because vomiting on the hardwood floor would certainly splash back up into his snout and be an all together unpleasant experience.

Grandma said that she could train him. She'd whip him right into shape. No problem.
Two years later, she said he was more difficult to babysit than my two young children. This revelation arrived after he ate her doughnuts off the cabin table and ran away down the lake, causing her to chase after him in the car and apologize to the neighbors when he ruined their outdoor soiree.

Five years later, and she still has not gained control of my ever loving canine. He dominates her. 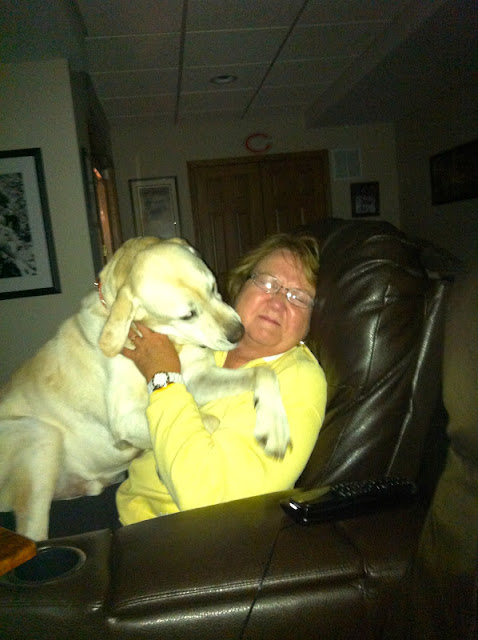 That fishing partner? The one that Mr. Musky envisioned? It worked once. 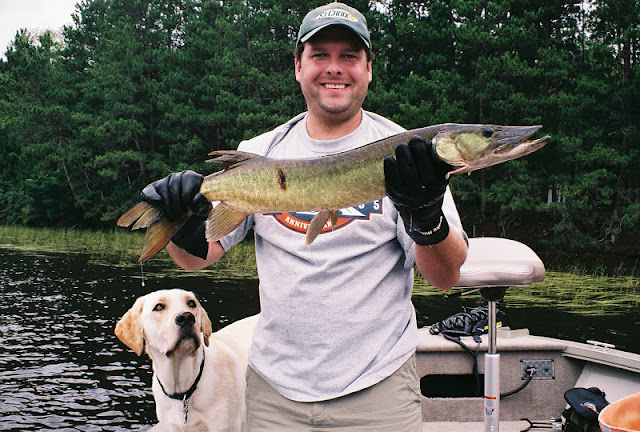 Another time I called him to see if he and Miller were catching anything. "Nope - I'm too busy scooping up puke. That blasted dog just yacked up carrots and corn all over my fishing boat, and it's magic hour! I didn't even make carrots and corn! Where does he get this crap?"

"The neighbor's garbage," I meekly shared.

Our needy little boy gets jealous. If I'm gone for a few days and talk to my son for five minutes without acknowledging the animal, he pokes me with his nose, whines, sniffs my crotch and eventually just starts barking at me for ignoring his affections.

But we love him. Mr. Musky plays hide-and-seek with him every night. Since he was a puppy. He hides, Miller seeks. And he loves this game. So does a certain middle-aged man. 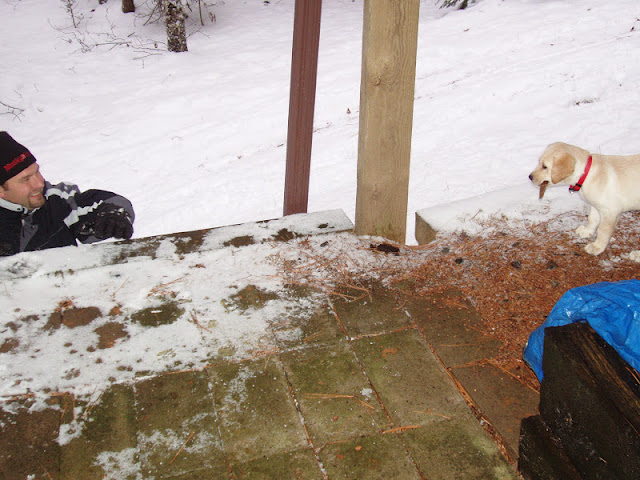 I walk him. I say, "Wanna go for a..." and it's all over. Crazy batshit things happen if I don't put his leash on and head out the door in the next sixty seconds after uttering those first few words. But we like what happens after the walk best. Wine and relaxation, baby. He's got our six. When our beloved beach is crowded at the lake, he walks up to the shallow area, starts to heave, and spews the contents of his gut all over the water's edge. Mothers scream, gathering up their toddlers to save them from doggie bacteria. Teenagers race for the shore and hop into their boats to dry off, utterly disgusted. Fathers yank up anchors, shove off, and motor out of there glaring at us for ruining their afternoon. 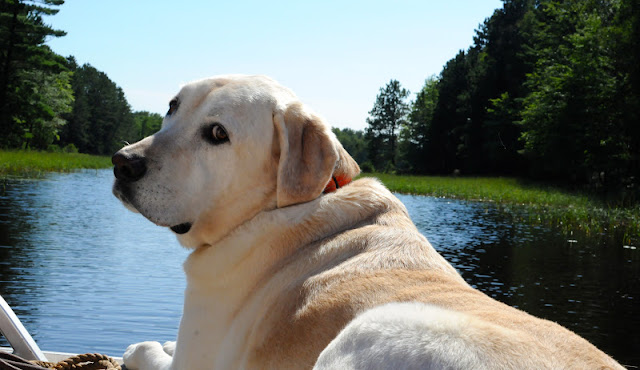 Then we have the beach to ourselves. It's only awkward for a few minutes. Once they're all gone, we just pretend we don't see the floating kibble in the water.

With all his flaws, he really is a good boy. He's my third baby - just not the kind I originally envisioned back in my twenty-something years. But he works. 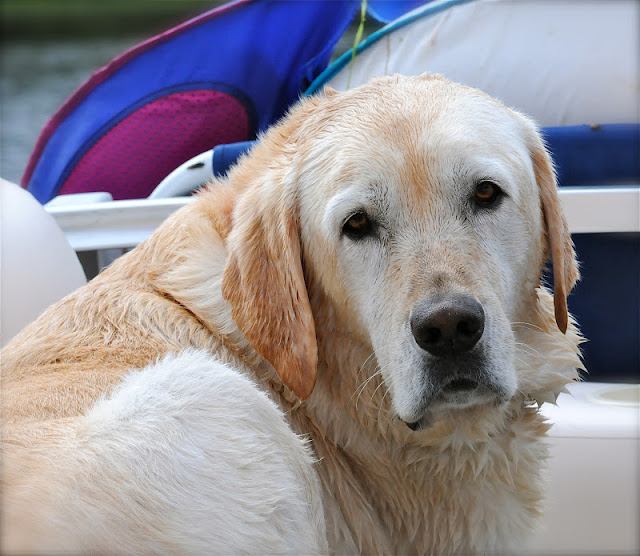 I love him, his loyalty, and the companionship he shares during the day when it's just us two around here. Even if he spends most of our time together napping. I could do without his flatulence though. It's hair-raising. And room clearing.

I'm a little sad today. He's not here with me, and it's really lonely. That Grandma? Who he sincerely cannot get enough of? She found a lump the size of an acorn squash on his ribcage this weekend and he's at the animal hospital getting it removed. I'm hopeful that it's something silly, just like his antics. 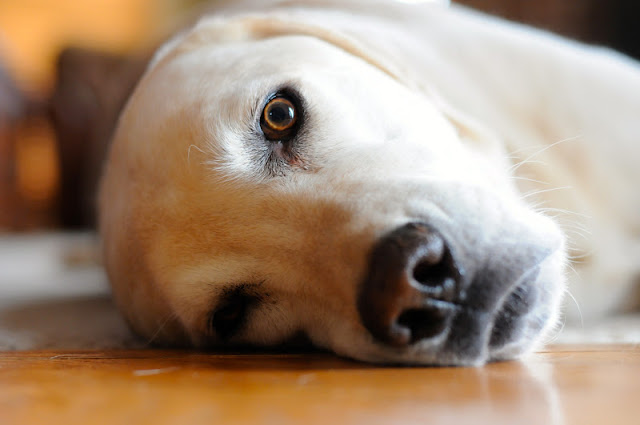