Well since I am now the ripe age of 40 and am certainly dripping in wisdom, I can finally prove my dad wrong on something. You can easily fit seventy-five pounds of shit into a five gallon bucket, as long as you bring along four motivated friends who are determined to experience all the Northwoods has to offer in Wintertime. We know how to pack it in and stay on schedule. 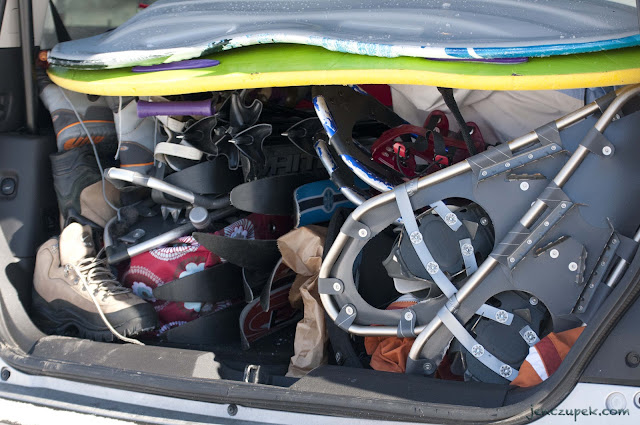 Before we arrived, I started a round robin to determine what everyone wanted to do and see over the weekend, since the list of possibilities was endless. Mr. Musky and I talked about it over coffee the morning I left, and he asked me for one favor.

"Why?" with pouty face in full effect.

Large sigh. "Because I haven't even been out on them myself yet this year. And your friends are inexperienced drivers. What if someone gets hurt? Or crashes a sled? And who always gets them out of the garage and ready to go? Do you even know how to back them out?"

So I agreed to keep the sleds in the garage. But...what would you imagine was the single most important thing that Hollie was dying to check off the list? 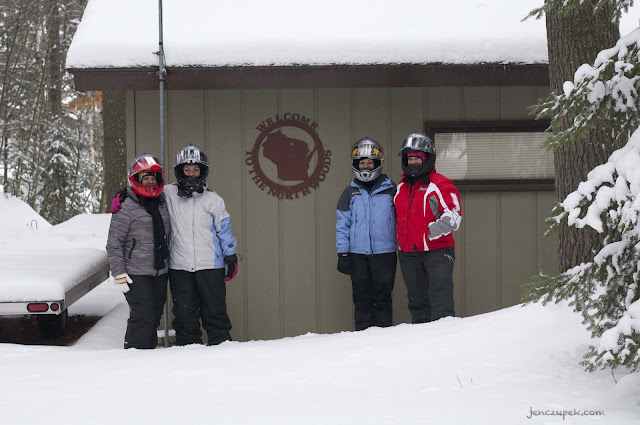 So after I wasted five minutes trying to figure out how to get the suckers in reverse... 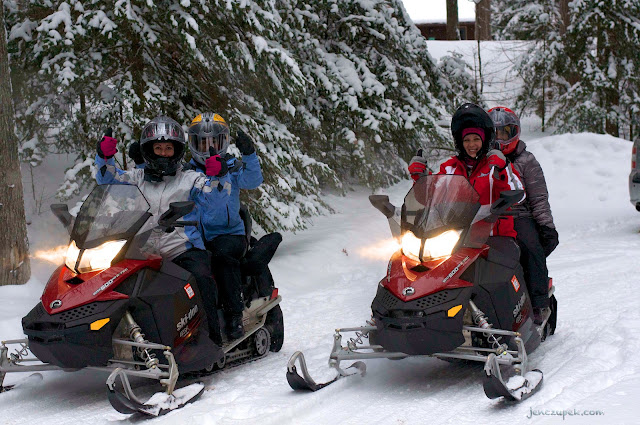 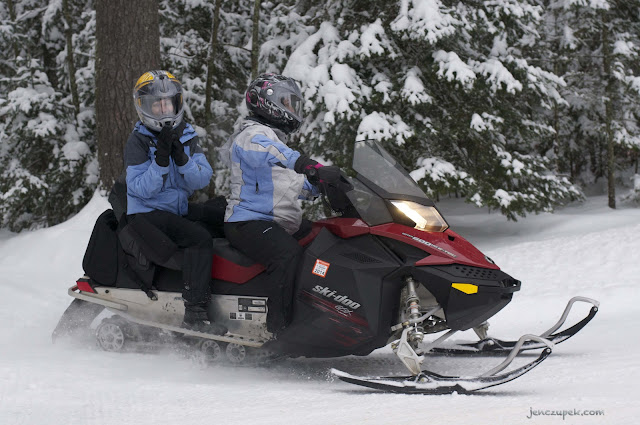 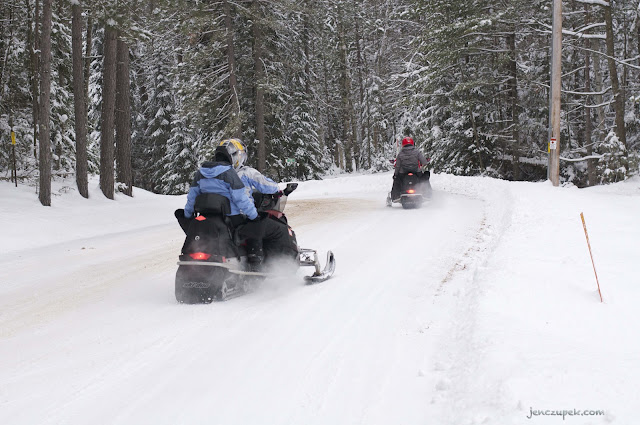 Check. And Mr. Musky wasn't even too mad, since Hollie knows her ATVs and she was the other driver.

We also got some quality sledding time in. First in our backyard, just to warm them up for the bigger sledding experience the next morning. I encouraged them to go belly style, then leaped on their backs so we sailed down the hill faster. It definitely helped them plunge into bladder-defying antics the next day. 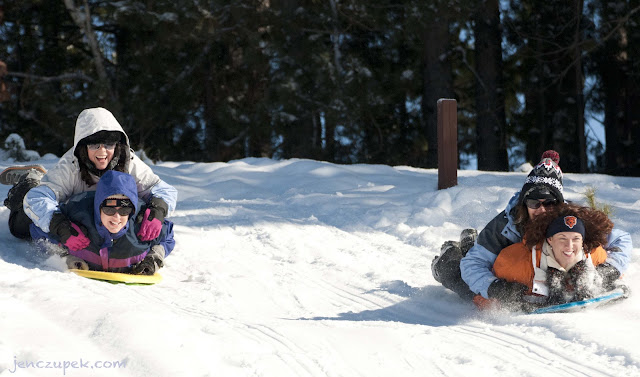 Who knew I was such a prankster? 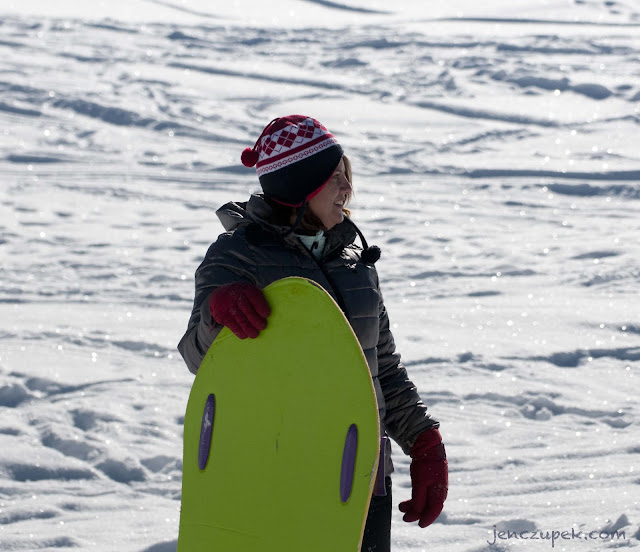 Ask Kim about "Scary Shower" sometime. She thought an earthquake was crashing the cabin walls down on her while she rinsed her hair. See, our bathroom is conveniently located on the other side of the laundry room, and the back of the shower is exposed and just begs for a body to bang on it when someone's in there doing their thang. Hee hee. Cabin fun brings out the pranksters in all of us.

But in the end? The good 'ol fashioned train provided the best sledding excitement. And Ice Hole lived up to its warming expectations. 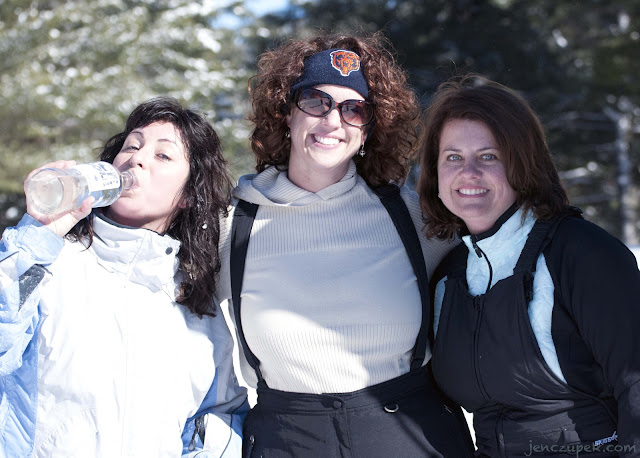 The 8th annual Labatt Blue Pond Hockey Championship on Dollar Lake proved a bit of a magnet after cross country skiing. Perhaps for the sights, perhaps for the sponsor's beverages. 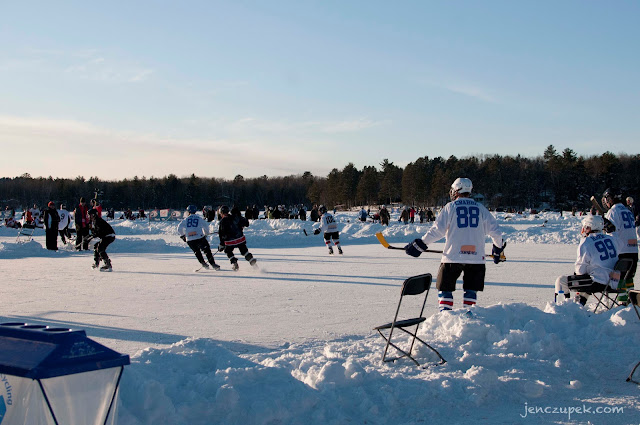 A husband or two may have been a bit concerned about the thousands of hockey players in town. 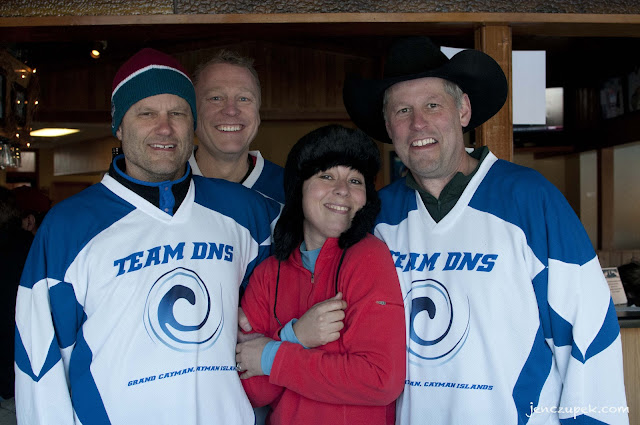 When forced to choose between tubing or dog sled races, the girls unanimously selected the pups for an adventure they'd never before seen. When we arrived to the races in Land O' Lakes, I was busy fiddling with my camera so the gals chatted up some dog owners next to our car. Amelia was so sweet and shared loads of info on her beautiful Siberian Huskies: Dove, Rocky, Faith and Laika. Amelia's mother, Diane, raced them for the first time ever, and I was honored to catch her coming around the first turn of the course. 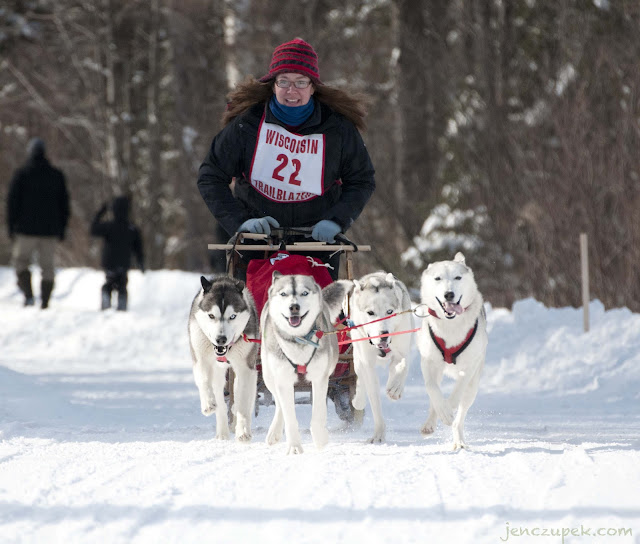 One of these beautiful doggers gave birth to a litter of puppies just weeks earlier - proof that postpartum mamas can do just about anything. 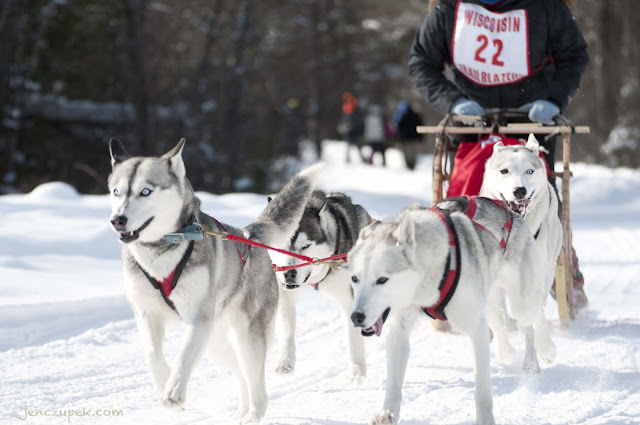 After watching a few more teams race by and marveling in the fact that temperatures in the 20s were nearly too warm for the canines, we grabbed a bite to eat then headed over to Afterglow Resort in Phelps - Amelia's hometown. A resort rich in history and offering "silent sports" to its guests and visitors, Afterglow is my favorite winter destination for snowshoeing, and it was on the top of Michele's list of things to do. We tried this spot out several years ago together, and we were thrilled to see that our trusty guide, Star, was still there and ready to join us on another romp around their majestic lake. 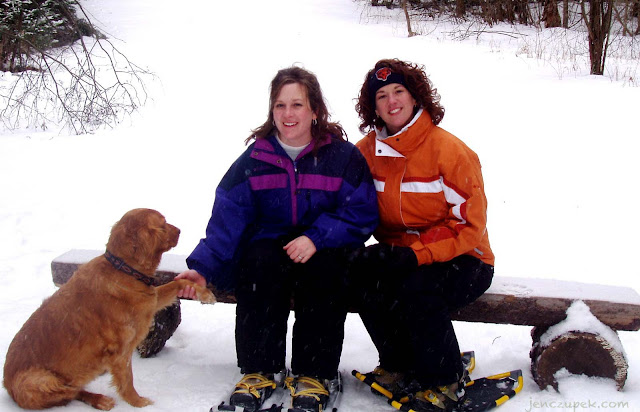 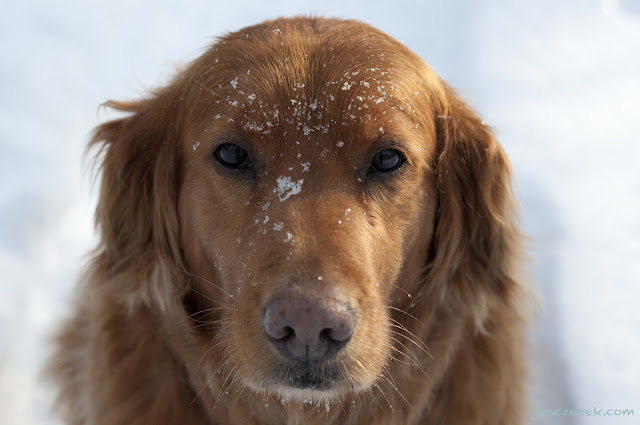 Also there to help guide us were Bozo... 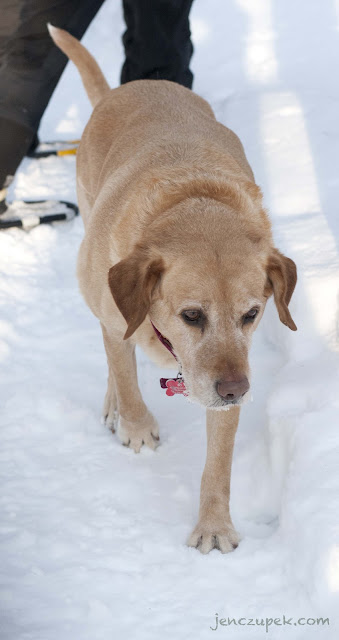 These delightful doggies make snowshoeing so enjoyable, and also peaceful. Because they all know the way home in case the humans get themselves lost. 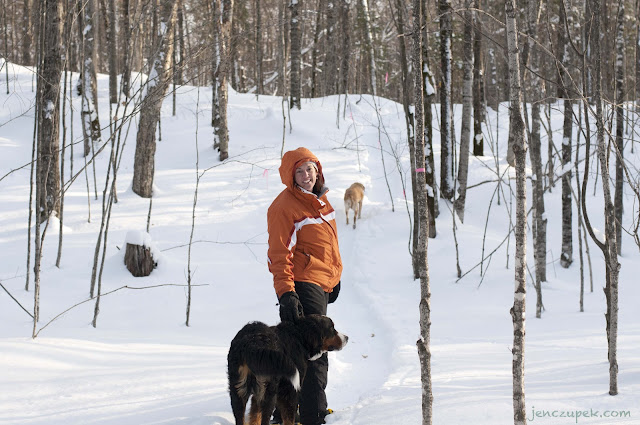 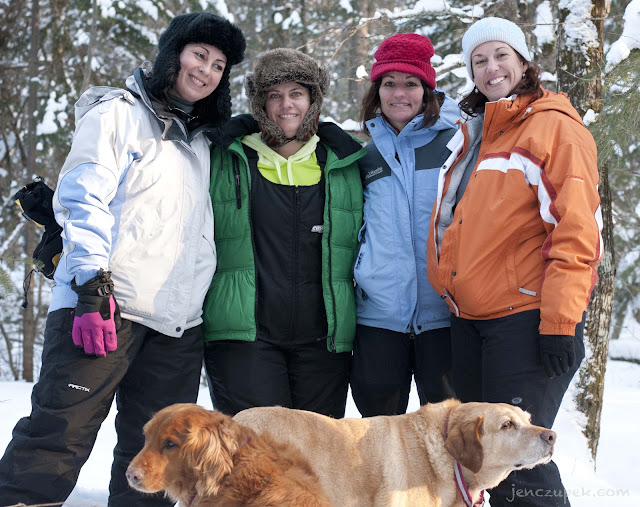 Which can certainly happen when Ice Hole is involved in the effort. 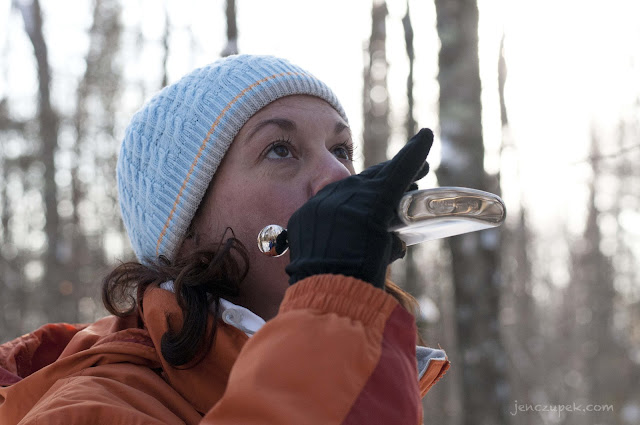 I have yet to tell you about our cross country skiing excursion and the ultimate - how five intelligent women convinced themselves to drive out onto Sand Lake and ice fish. So come back later this week for some more of our Girls Gone Wild weekend.