A Night at Beth's Table

A few weeks ago I received an email from Teri, asking if Carrie and I wanted to join her on a Wednesday night at her friend's new business called "Beth's Table." Beth delivers clever home entertaining tips, ideas and recipes through her hands-on workshops and cooking demonstrations. Despite guitar lessons, Lent service at church, hockey practice, and the list goes on and on and on...I said yes. 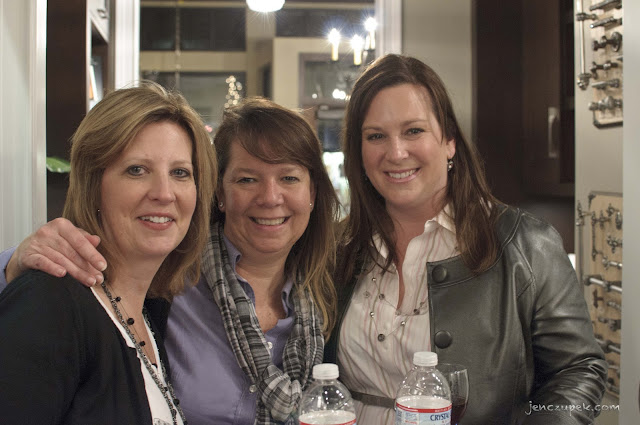 In addition to running an upscale cocktail catering business, Beth hosts classes focused on throwing memorable parties with delicious food in a relaxed, authentic environment using the stunning Liam Brex showroom as her 'office.' Amaury Rosado is a renown Chef serving up an inspired, award-winning, eclectic menu in the Western Suburbs. The gal in green, below, described the wine pairings for the evening, is "a self-proclaimed example of when Med School doesn't work out" and "grew up Italian, drinking a nice glass of red wine while doing Geometry homework at the kitchen table." Put them all together in the same room with fresh ingredients, Truchard wine and engaging conversation? 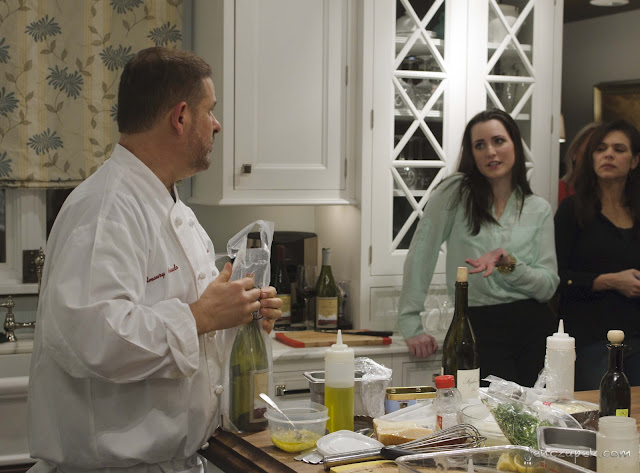 Entertaining. Decadent. Educational. Welcoming. Approachable. A night that I will not soon forget.

Just let me talk about Beth for a minute. I've been in the same room with her only twice, but I already dig her. She's a former chef, former restaurant owner, former sales gal (I knew we had something in common immediately) and is now chasing her dream (that's two for points in common). Have you ever met someone who you just know is cool, successful and gives off an I-must-know-her-better vibe? That's Beth. 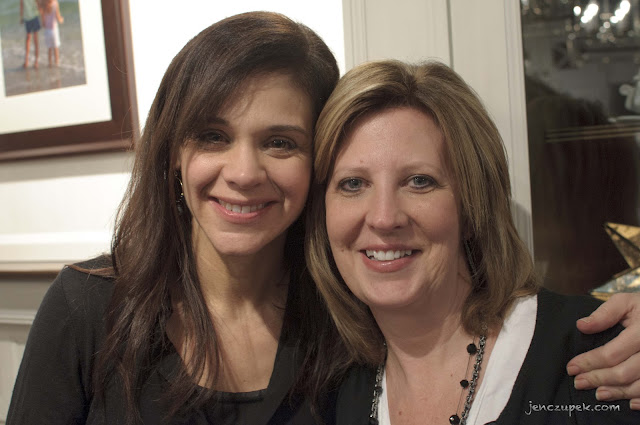 And then there's Chef Amaury. I think I died and went to foodie heaven about seven times that night. I learned some new tips that are probably sophomoric to most in the food world. Dry your grouper thoroughly with paper towels to crust it with a colorful, crunchy sear. Toast some amaranth, then simmer it with saffron in chicken stock to create a unique bed for that perfectly seared fish to lay upon. Reduce some blood orange juice, red wine and fresh tarragon to a mere two tablespoons of richly flavored goodness. Then transform it slowly with a cube of butter at a time, being careful to not break the sauce by whisking on the heat, off the heat. 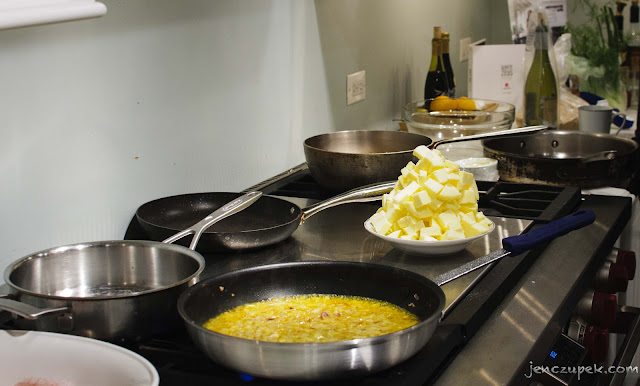 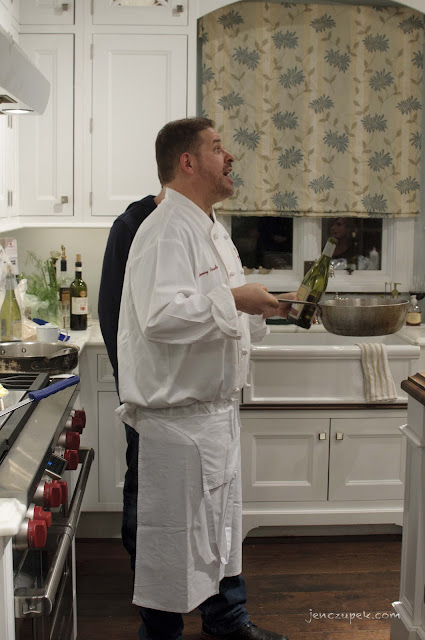 Chef Amaury oozes passion for his craft, evidenced by his enthusiasm, wildly dancing eyebrows and contagious smile that can't help but mesmerize the pickiest of eaters. His excitement and energy in the kitchen infectiously created impatience in the small gathering to sample his cuisine, not to mention the aromatic, savory scents that filled the room. He made it abundantly clear that he's as approachable in his restaurant as he was at Liam Brex that night.  I've already booked a reservation. 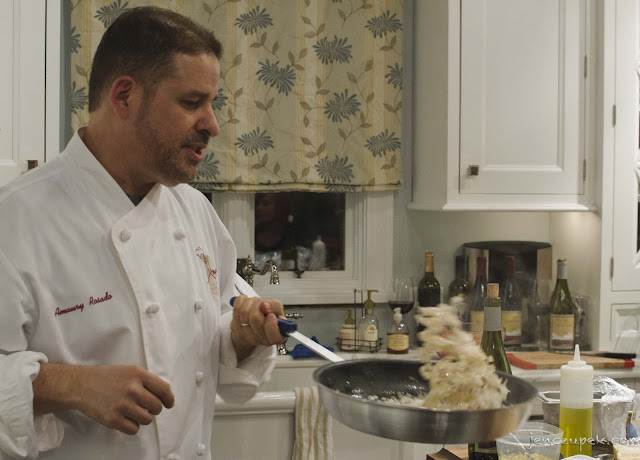 His meal of pan seared grouper atop a bed of saffron-seasoned amaranth, topped with buerre rouge sauce aside a crisp, fragrant blood orange salad exploded into a fiesta of richness and texture in my mouth. He came to our table offering more amaranth. 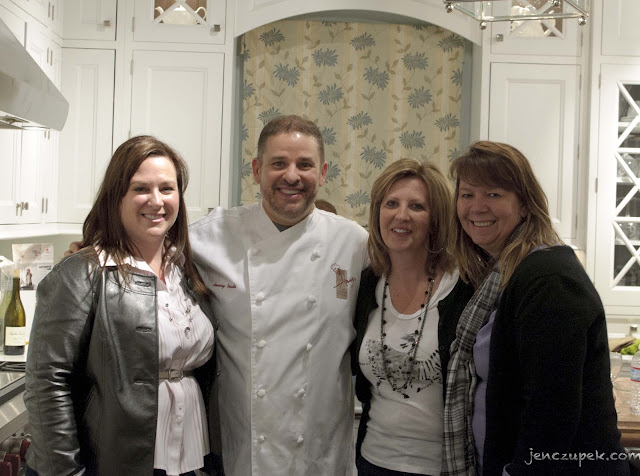 I've talked about things in the past exceeding my expectations and how giddy it makes me. I can add this to the list. While I cannot wait to someday go hibernate in the woods and avoid civilization at all costs, it's nights like last Wednesday that cause me to pause. I love experiencing something totally unique and different while meeting engaging, REAL people who already invited me to join them again in their kitchens. Not to mention the new techniques and tricks they taught me, which I've since employed in my own kitchen. Mr. Musky and a tribe of teenagers are the benefactors of my newfound intelligence. Truffle risotto with shrimp and pan seared scallops - perfectly crusted, thanks to the drying technique. Divine. Mussels in a savory, white wine cream sauce with crunchy french bread. Lemme lick the bowl. And the coup - pan seared chilean sea bass atop superbly seasoned lentils and carrots drizzled with a luscious, creamy buerre blanc sauce. 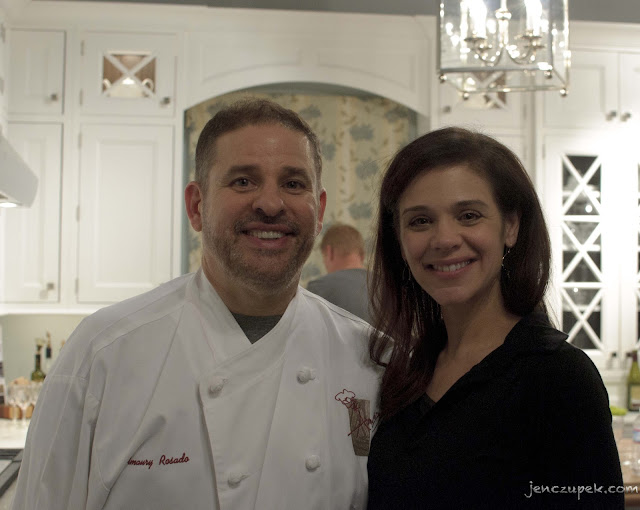 I enjoyed my evening so much that I rejoined Beth at her Table four days later with Kahley to eat some of her awesome chorizo chili, white chicken chili and bacon wrapped stuffed jalapeño peppers. 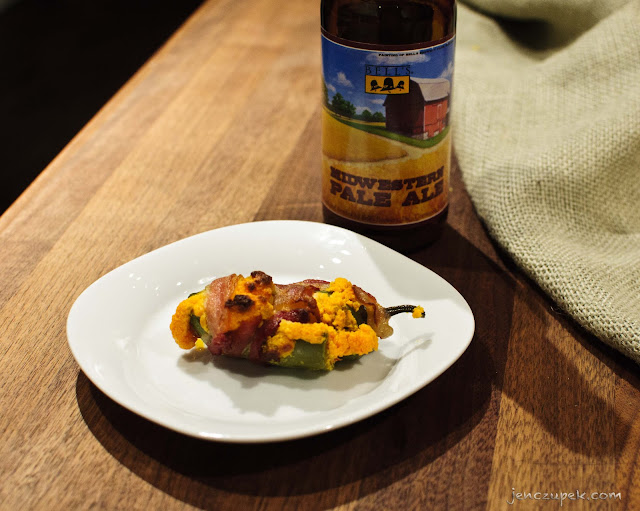 All the while, a production crew filmed pilate footage for her friend Debbie who's pitching a show for the cooking channels on home entertaining and how to keep parties fresh and interesting. 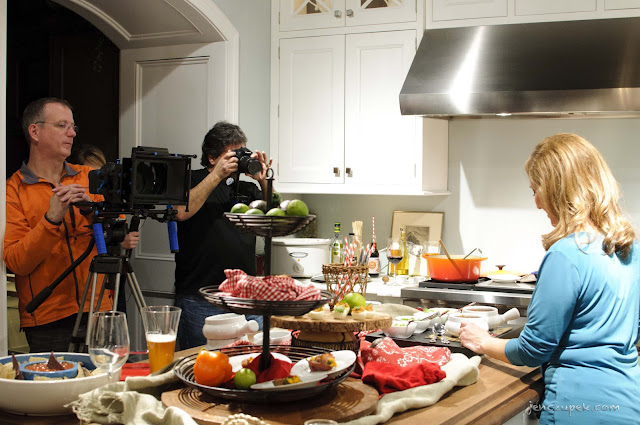 Did I mention that Beth earned a top 100 spot in the Master Chef Season 2 World Food Championship? Or that she won the Sterling Wine Ultimate Host Challenge last August? How about the fact that she interviewed Nigella Lawson (now I'm officially jealous) and actually cooked alongside Paula Deen? 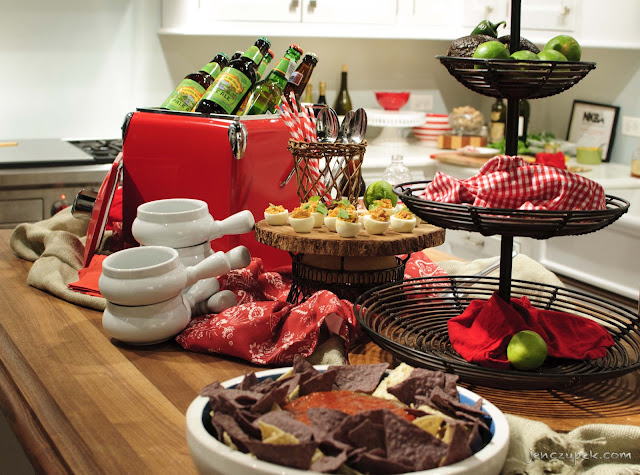 Family members hailing from the South! Aunt Betty, Aunt Jackie, Aunt Lennie! Sandy, Lisa and Chris! All the rest! Did you hear me?  SHE COOKED WITH PAULA DEEN IN SAVANNAH! As in cheesey grits and mushroom casserole and all that is buttery and gooey and divine. 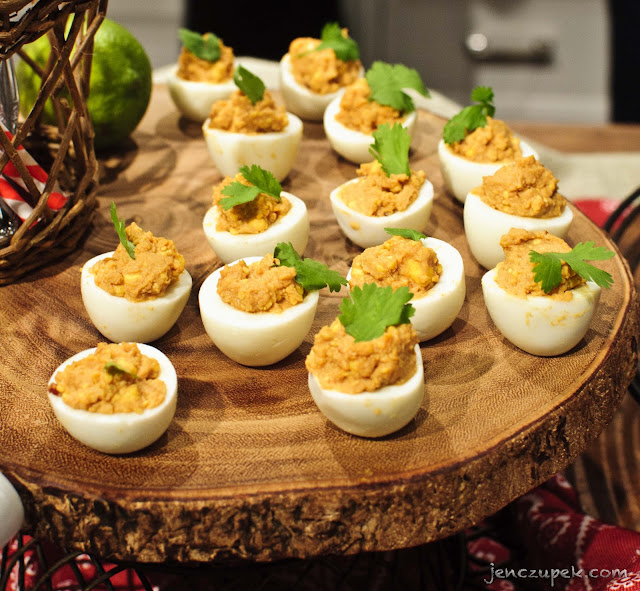 Needless to say, I'm going to be seeing more of  my new friend Beth in the very near future. And Chef Amaury. And I've already cashed my coupon in at Peterson's Wine store and will be back for more there.

So if you get an invitation to come to a Blackhawks party at my house because there'll be a production crew here to shoot more footage for a cooking show pilate, go with it. Just don't throw back my famous bloody mary's until the crew says "Roll Camera!"