I feel like I'm beating a dead horse over here, but I can't stop Genuinely Speaking about the seafood obsession that took hold of my family after our return from California. A few days later, it was the mussels. A week later, I wanted shrimp, but Mr. Musky had other oceanic crustaceans on his brain. So we compromised, and cooked an all out Seafood Smörgåsbord.

We rarely go out to dinner anymore, for a variety of reasons. Primarily, the cost. We can prepare a satisfying, delicious meal at home for a fraction of the cost, and we enjoy spending time together in the kitchen. The price of our beloved apéritif alone could break the bank in Chicagoland, not to mention the obligatory glass of wine with dinner and the meal itself. So instead, we declare Friday afternoons "Date Day" and go out to lunch together. Sometimes we'll catch a movie, sometimes we'll go shopping, sometimes I struggle with placing a golfball into a tiny hole. We try to do this once every couple of weeks in the fall, winter and spring. Summer will find us on our boat at the cabin nearly every Friday Happy Hour.

So after a light lunch in nearby Naperville a few weeks ago, we meandered around a couple of shops (code: Apple store for him, kitchen store for me), then made our way to a seafood shop. Mr. Musky picked out a couple of lobster tails and some king crab legs for our feast later that night.

Meanwhile, I received texts from my eldest demanding, "WHERE ARE YOU MOM?!?!" I guess I'm not allowed to venture out while leaving my car in the garage, because visions of alien zombie vampire kidnappers race across the imaginative brain of a hormonal teenager who requests a ride to the mall at precisely 3:32 p.m. because OH MY GOSH I WANT TO USE MY BABYSITTING MONEY TO BUY A NEW TOP FOR THE PARTY TOMORROW NIGHT CAN YOU PLEASE GET HOME AS SOON AS POSSIBLE BECAUSE WE TALKED ABOUT THIS AND WE ARE LATE PICKING UP MY FRIENDS!"

So the minute we got home and I saw the teenager waiting in the garage for me, I hopped into the car and we were off.

"Oh by the way...is it OK if we go to the outdoor mall since it's so nice outside and can you pick up my friend who lives across the interstate?"

Sigh. I truly did tell her that I'd drive her and her friends to the mall, but I didn't realize that one of them lived two minutes away as the crow flies, yet 40 minutes away by automobile thanks to the incompetent Illinois Department of Transportation who lays out the roadways around here. Aaaannnndd...by now it was 5:00. On a Friday. In Chicago. Which is at the very top of the list of Why I Left Corporate America.

So needless to say, I called Mr. Musky on my way home and asked for a little favor. To pretty please, with sugar on top, make me a giant Sapphire Martini, straight up, with a lemon twist. I needed the big guns to get my head back to its happy place, and he willingly obliged. I walked into the door to this: 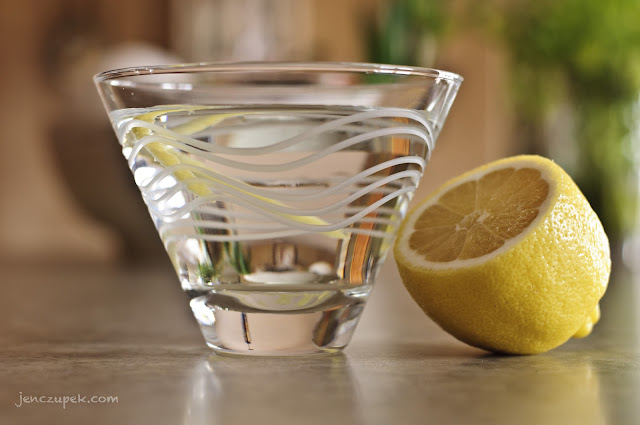 Goodness, I love that man. He also asked me what music I wanted to hear. Feeling a bit melancholy after all that traffic, I requested Sarah McLachlan on Muse. However, three songs later and ready to commit myself for depression therapy, I asked him to sauce it up. I closed my eyes, inhaled the aroma of juniper berry and nine other exotic botanicals, and felt my hips start to sway as Stevie Ray Vaughan's sexy, raspy, bluesy voice began serenading me.

Not only does he make a killer drink, but that man o' mine also knows what gets my soul.

While I was out fighting every other car in suburbia, he split the king crab legs with kitchen shears, prepared the lobster and assembled the ingredients I'd need for our Shrimp Two Ways. 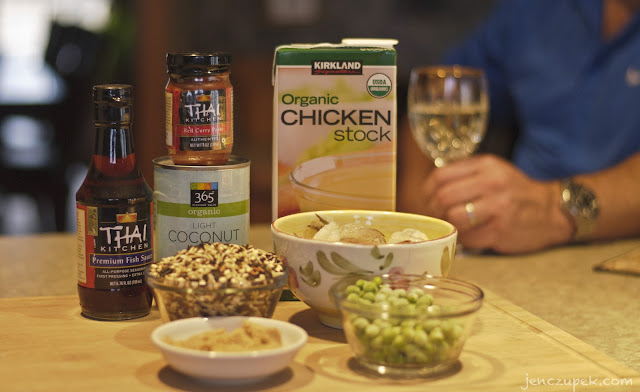 So yes - Shrimp Curry. I've never made it before, but I had coconut milk in the pantry. Because obviously, all midwesterners have that on hand at all times. Riiight. Actually, my mother-in-law gave me some when she moved to Palm Springs. Which might just be the biggest puzzler of all. Why would she ever have coconut milk gathering dust on her shelf?

The only thing I can come up with is to make Pina Coladas. That has to be it. And clearly, that didn't happen because my pantry was the proud recipient of her failed apéritif. So the Coconut Milk, along with 1T red curry paste, 1-2T fish sauce, 2 and 1/3 cups chicken stock, 1 cup wild rice blend, 1/2 pound of peeled and deveined shrimp, 2T of brown sugar and 1/2 cup frozen peas are all you'll need for this creamy, curiously delicious and not-too-spicy dish.

Knowing the rice alone (simmering, covered, with 2 cups of the chicken stock, 1T butter and a pinch of salt) would take 50 minutes to cook, I decided to start with a simple, yet oh-so-good shrimp appetizer. 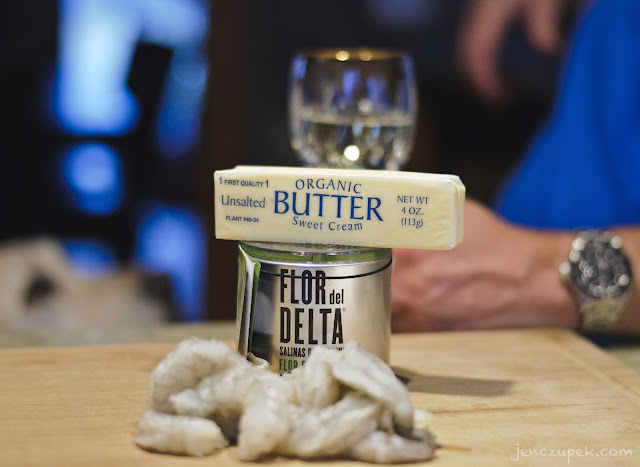 Seasoned Shrimp sautéed in butter. The fancy salt - Flor del Delta - was my kitchen store purchase earlier in the day, and I'm smitten. Salt, dill, tarragon, star anise all combined for an instant seasoning. Yummy stuff. I simply sprinkled it on the shrimp, melted a tablespoon of butter in a cast iron skillet, and plopped in the shrimp to cook a couple of minutes on each side while the rice simmered away. 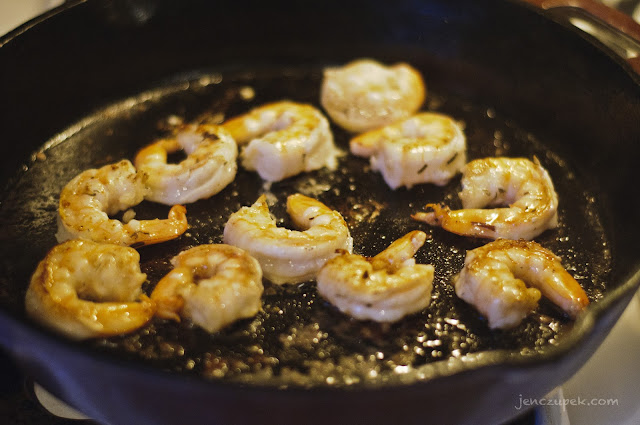 Then I whipped up a simple sauce to dip the shrimp in...because there's just something about dip. It's fun, versatile and makes something yummy taste even better. My new go-to? 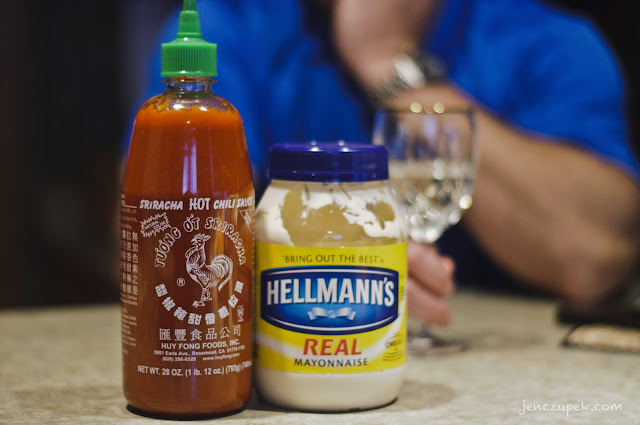 Mayonnaise with a healthy squirt of Siracha Chili Sauce. We use it on burgers, chicken, turkey sandwiches and sausages, so why not for shrimp, too? Delicious. I added a squeeze of lemon and some of the zest for added freshness. Sometimes I'll throw in chopped cilantro, lime zest, garlic powder and a squirt of lime juice for an awesome POP that gets the back of your tongue. Good stuff. 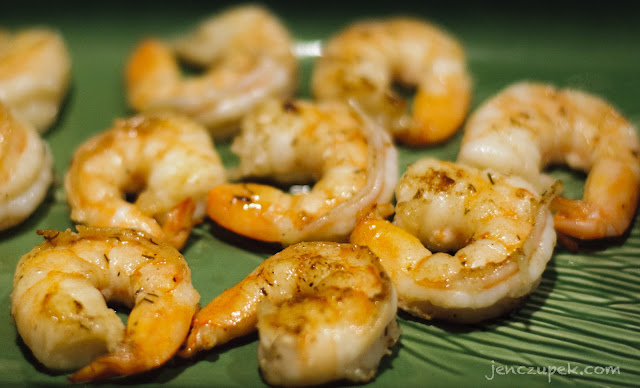 Needless to say, our tasty little appetizer tided us over and went so very well with my hefty cocktail, which ended up being the only apéritif I needed all night. Meanwhile, out on the grill, Mr. Musky went to work on the crab legs and lobster while he sipped on some Charddonay. 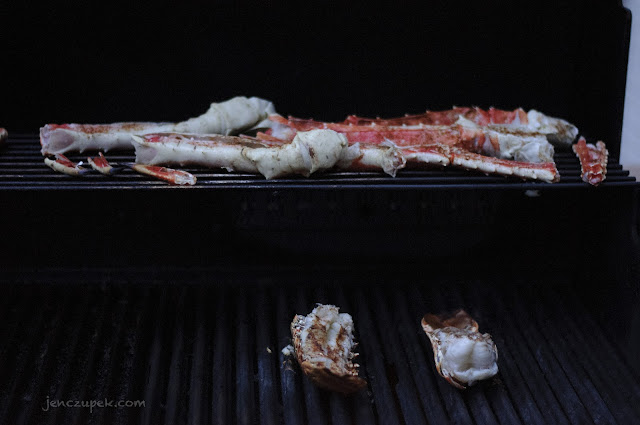 I honestly don't know how he does this, other than just grill it until it's done, being careful not to overcook it so it's not rubbery in texture. He just cooks the meat until it's opaque. While I... 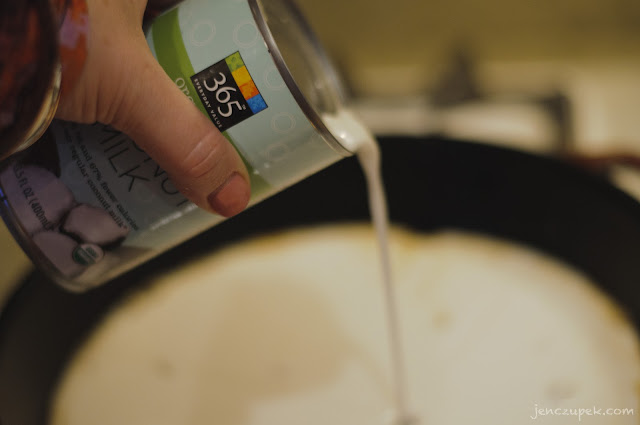 ...got down to business on the curry. I adapted the directions from the back of the Thai Red Curry Paste jar and it couldn't be simpler to make. I simmered the coconut milk with the curry paste for about five minutes. Then I added the brown sugar, 1/3 cup chicken stock and the peas. Oh...and the fish sauce. Let me pause for a minute. Have you ever smelled fish sauce? Out of a bottle? Well, I have. And it almost got the boot based purely on its funk. Like a hairy human who hasn't showered for months. I figured it's such a small amount, I might as well throw it in there. But not before asking Mr. Musky to give it a good whiff first. 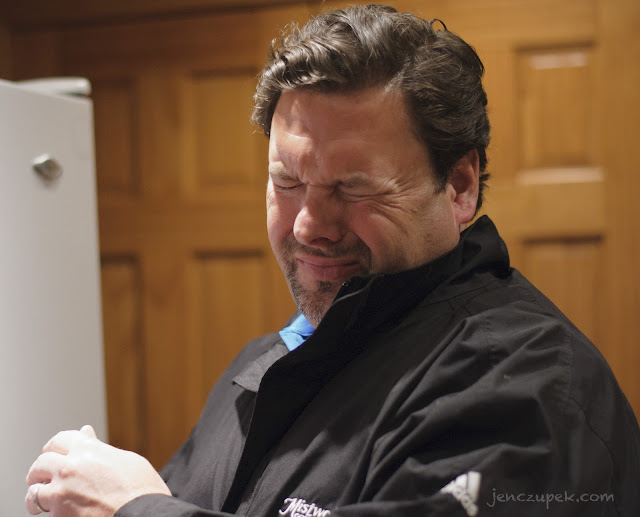 Hee hee hee. To be polite and not swear, it smells like a rotten butthole. Miller probably wouldn't care and would like some on his dog food. 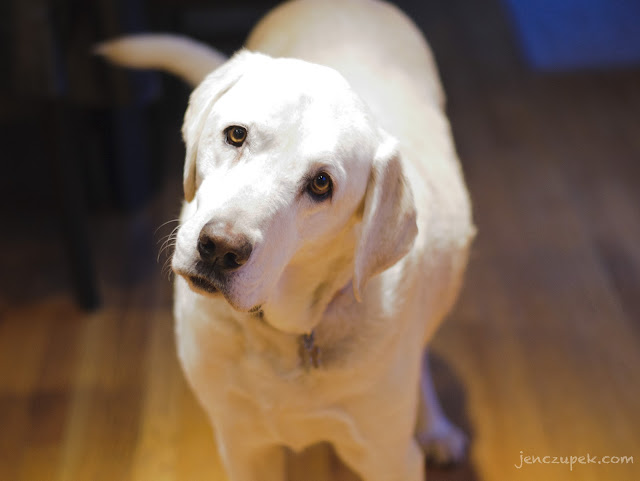 I cooked the sauce for ten minutes on low heat, then added the shrimp and simmered it for another 3-5 minutes. So pretty! 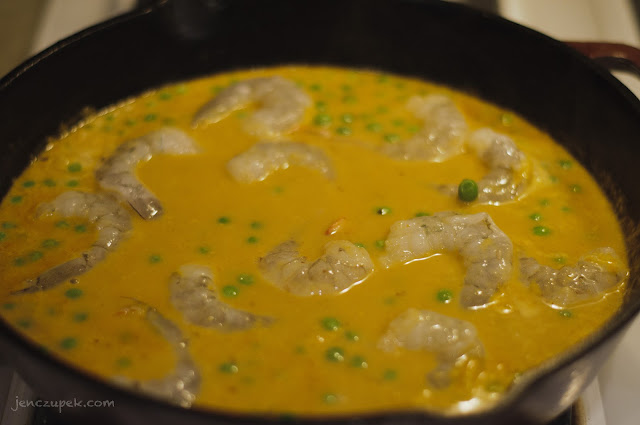 By then, the rice was perfectly cooked to al dente... 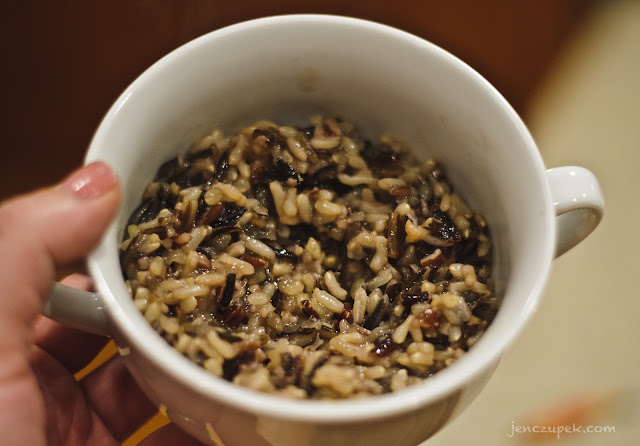 ...so I topped it with some of the Shrimp Curry. 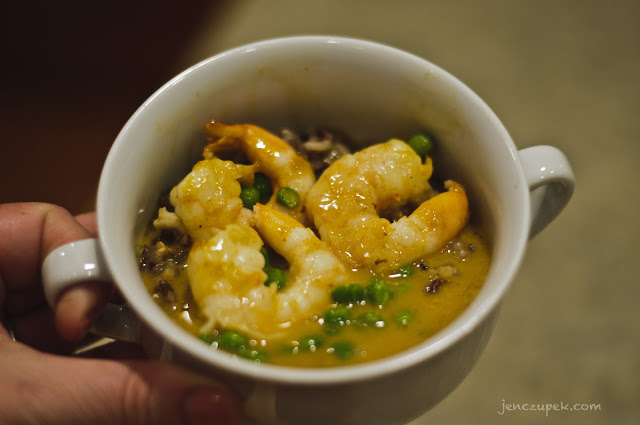 And despite an underlying, forceful urge to schlurp it up and drink it like a neanderthal, I forced myself to wait for the rest of my family, and the rest of the buffet. 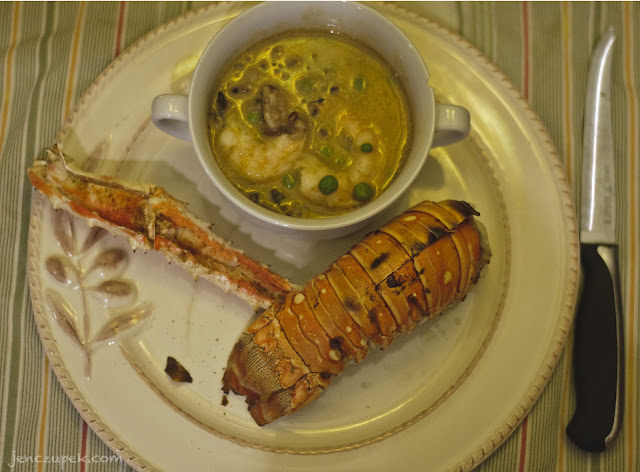 Which was unquestionably worth the wait. Look who magically appeared at the words Crab Leg? 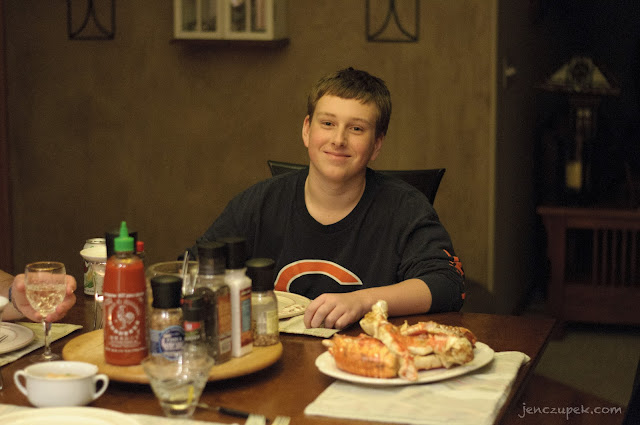 He who has not yet a busy social calendar. Unlike some, who are happy as a clam to indulge in leftovers. 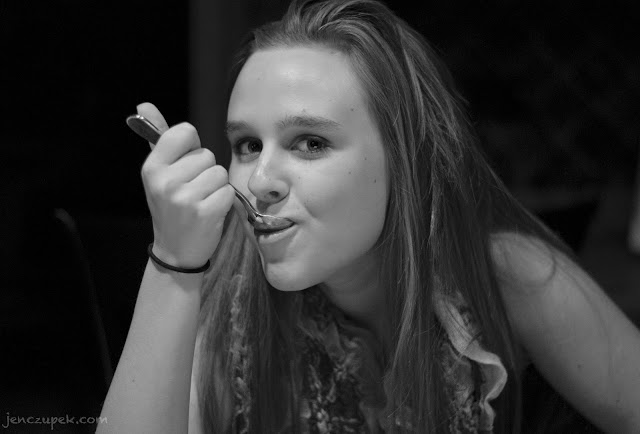 In the dark, with her biggest fan, while she shows and tells of her latest shopping triumphs.

And the fish sauce? Couldn't even taste or smell the fermented fishy odor once it was in the sauce. I liken it to Vinegar or Worcestershire. You wouldn't drink either of those straight from the bottle, but they are awesome ingredients to include when warranted. I put fish sauce on that same playing field. It brought a certain depth and another layer of flavor to the dish, which would certainly lack without it. But I won't be trying a Fish Sauce Challenge in my future. Ever.

Needless to say, I am soooo making Shrimp Curry again. It was divine, and the leftovers didn't last 24 hours.

Thank you, Scandinavians, for bringing us the uniquely adaptable and palate-pleasing Smörgåsbord.