SCHOOL'S OUT FOR SUMMER!

Is there ever a better feeling as a kid than to have the wide expanse of 2.5 months of sun-filled days ahead of you, with no school or waking early or studying for tests? Especially before you're working years? I think not. Long stretches of days with friends at the pool, water park, mall and video gaming all lie ahead, and that first day of school in August seems years away.

While normally on Fridays I like to cook something a bit more elaborate, there are other times, namely the kick-off of summer, when everyone likes something quick and easy so we can all get back to our summertime fun.

When teenaged friends show up around dinner time, I try to come up with something that most everyone likes, can be consumed quickly on paper plates, and is equally simple to prepare. While I'm not a fan whatsoever of the fast food version of the slider, I do enjoy making them at home. And everyone I know devours them quickly.

I was born and raised until 16 in the small town of Milan, Illinois, on the Iowa/Illinois border near the Mississippi River. There's a little diner in Milan called Maid-Rite, and their signature sandwich is of the loose-meat variety. I grew up thinking that this was standard diner fare, but found out quickly upon moving away from the area that this not the case. Maid-Rites simply don't exist anywhere in the metropolitan St. Louis, Champaign-Urbana or Chicago areas - places I've called home since moving from the Quad Cities years ago.

Unlike a sloppy joe, the loose meat sandwich consists simply of ground beef and spices served on a steamed bun. It's a great foundation, but that just doesn't work in my house. So here's what you need to make my version of the Maid-Rite: 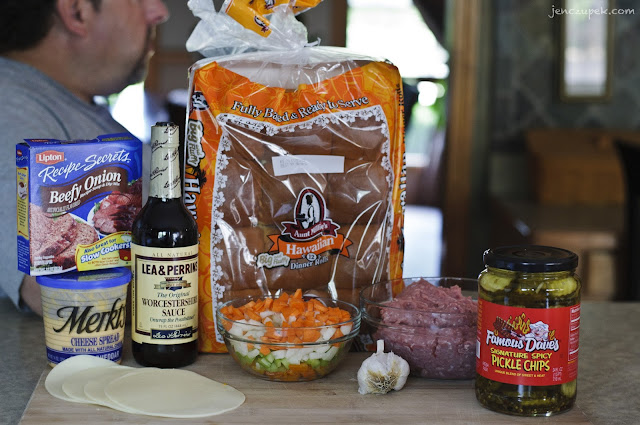 Start by sautéing the vegetables in a bit of olive oil. Or butter. Or a combo - whatever floats your boat! 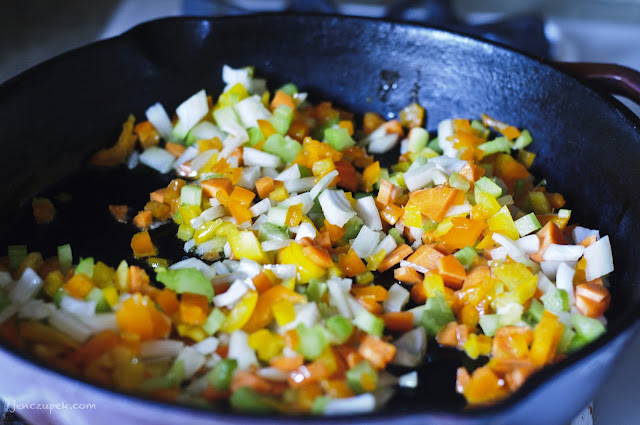 I know that loose meat sandwich purists all over the world are probably cringing, but if I ever have a chance to sneak a vegetable of any kind into this kid, 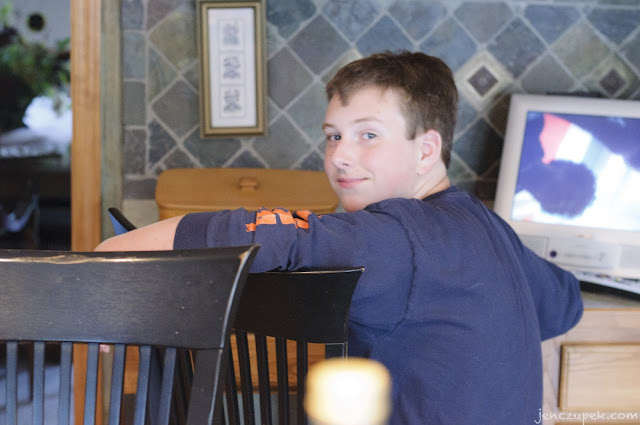 Then I do it. He doesn't even bother picking them out anymore. Sweet.

Push the vegetables to the edges and plop the meat into the middle of the skillet. Brown it up, breaking up the meat as it cooks. This is supposed to be crumbly and messy, so go after it with your wooden spoon. The smaller the ground meat, the better. 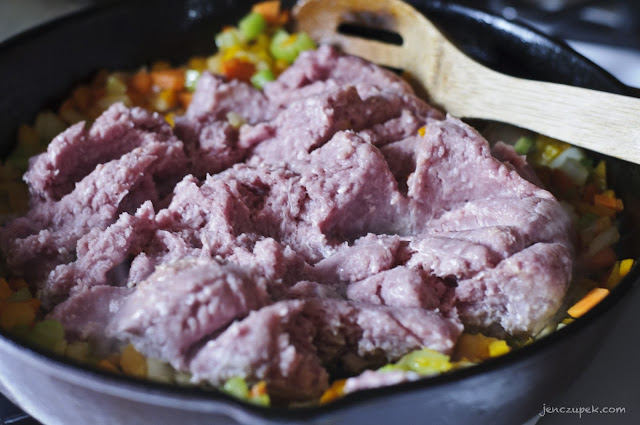 Once the meat is fully cooked and incorporated with the vegetables, add the garlic and the package of soup mix. 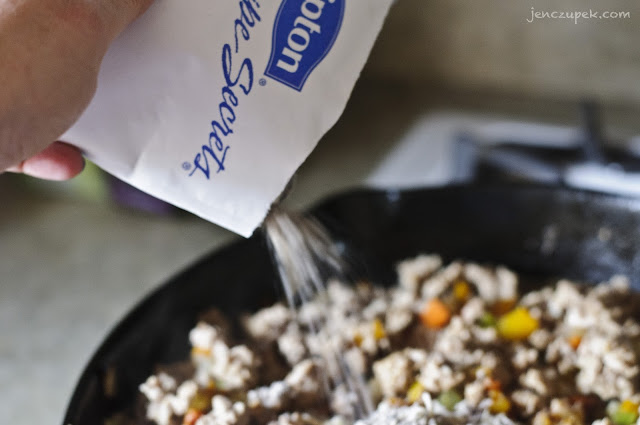 And a large blob of cheddar cheese. Or two, to your liking. I added two. 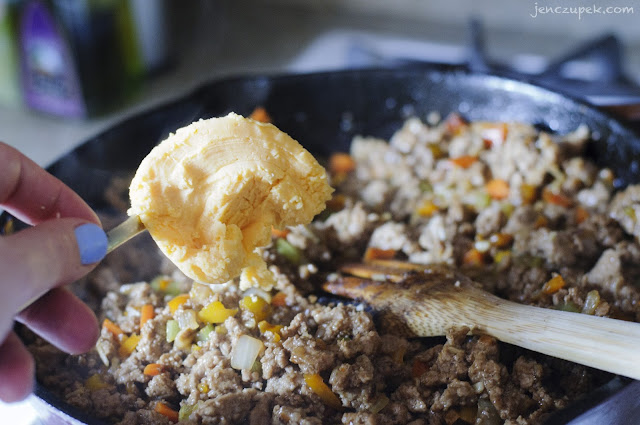 Toss in your Worcestershire sauce. DO NOT ADD ANY SALT! There's plenty of sodium in the soup mix, worcestershire and cheese. If you'd like, add some ground pepper.

Offer up a spoonful for your taste tester to see if anything needs adjusting. After he deems it ready, add the Franks Red Hot Sauce. Because he might not like it spicy, but you do! 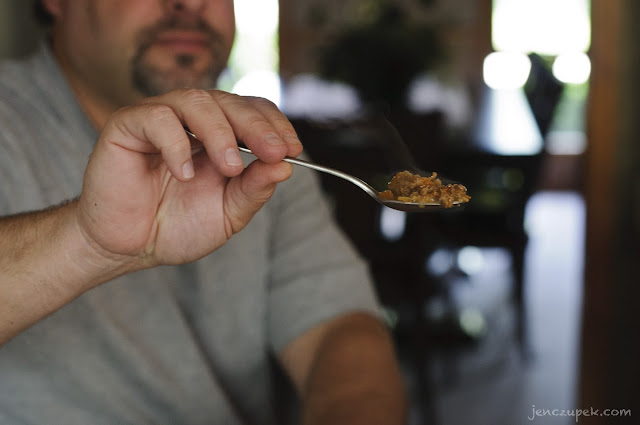 Now for the fun part. Assemblage. Cut the Hawaiian rolls in half, leaving the individual rolls attached, and line each bottom with a piece of cheese. 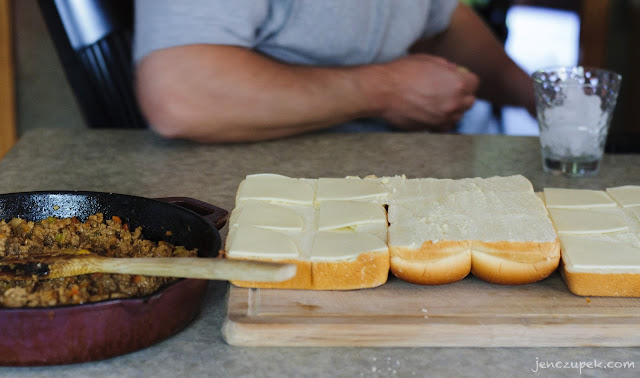 Pile on the meat mixture. It should be slightly saucy, but not overly so. Put on however much you like. Since I had two slabs of rolls, I used half on each. 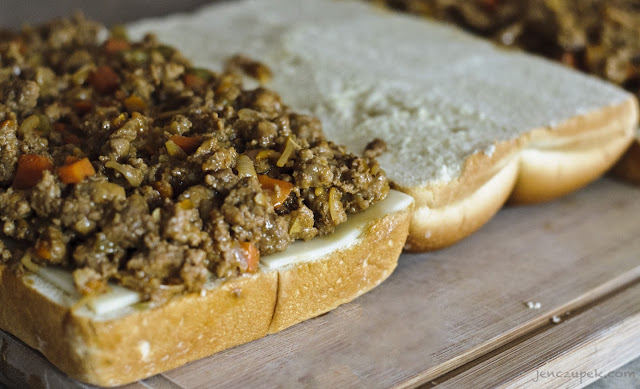 Place the tops of the rolls on the bottom half, and place each group of six on a large sheet of aluminum foil sprayed with cooking spray. Wrap them up like a present, sealing tightly. 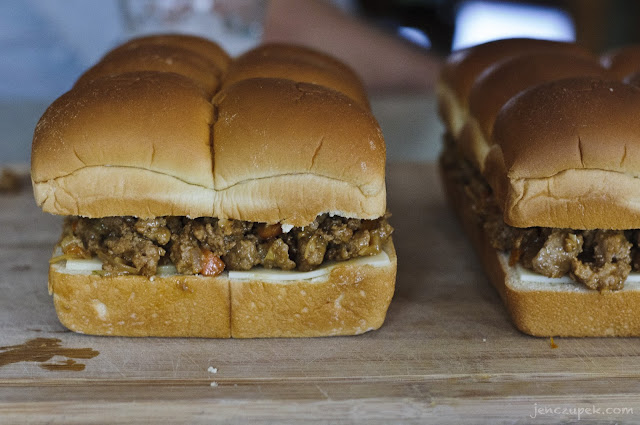 Bake in a 350 degree oven for 20-25 minutes. The idea is to get the sandwiches relatively hot, the outsides of the rolls will get just slightly crispy, and the cheese will be fully melted when your taste tester pulls them apart. 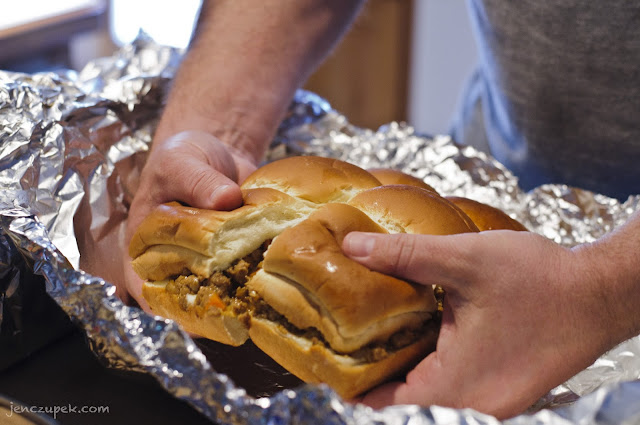 Plop a pickle or two on each sandwich and enjoy. The vegetables and pickles add great texture and crunch to the seasoned, spicy meat and the buns have a bit of the steamed effect from baking in the oven. Two of these is plenty for me, but not the men in my life. They eat three or four.

For the teenagers who magically appeared, I made chocolate-banana-peanut butter smoothies, and added a slice of watermelon to their plates. For the smoothies, I blended two packages of chocolate Carnation Instant Breakfast powder, about a cup of vanilla yogurt, 3-4 frozen bananas and a large scoop of peanut butter in the blender. I added skim milk as needed to thin them out. Yummy! 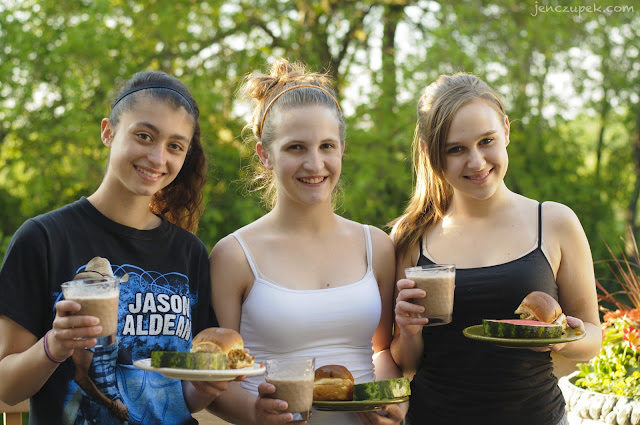 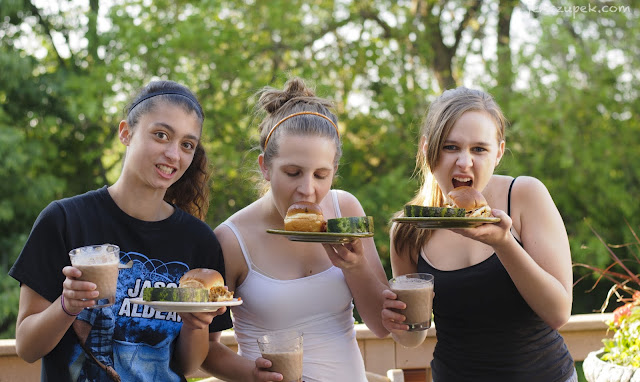 OH - I almost forgot! The adult apéritif for the evening? Wine. Plain and simple. Beer would be great with these, but I stopped consuming that stuff a few years post college. Perhaps the weekly ritual of dipping a common plastic cup into a giant bucket of luke-warm Pabst Blue Ribbon on Friday afternoons scarred me for beer consumption later in life?

Enjoy! Coming next week - outdoor cabin cooking at it's finest.