Last spring, Mr. Musky started in about some smoker he wanted for the cabin. I listened patiently, counting up the number of grills we currently own between our two homes.

That's nine grills. Obsessed much? No way was I agreeing to yet another grill for the cabin, despite his efforts at persuasion, which usually work on me when food is involved. Nope, not even if we could go boating all day, with the meat on the grill and an electric, automatic mechanism feeding more wood pellets into the smoker to maintain a constant temperature, presenting us with a perfectly cooked main course without so much as lifting a finger for hours.

Until one day in Costco in March, we ambled by the lady selling the Traeger, and I could tell it was all over. I'd lost. I made my way down to the wine section while he remained, entranced by the possibility of smoked everymeat.

Mr. Musky and his Traeger made the trip north in April "just to get everything set up." He texted me pictures of chicken wings on the smoker, and just when I started to think I'd lost him to a smoking meat machine, he returned home, praising the benefits of being able to cook while getting work and chores done all day.

And now I have to eat crow. I LOVE THIS MACHINE! We've cooked ribs, pork shoulder, turkey legs and thighs, chicken, and most recently, turkey breast and brisket on the Traeger. It is so nifty - just turn it on, make sure there are plenty of wood pellets in the reservoir, set the temperature, and walk away, coming back to check on the meat periodically until it's done.

Rather than buy lunchmeat all summer, we brined and smoked fresh turkey parts. They sell them all over the place up here, and it makes the juiciest, most delicious turkey salads, wraps and sandwiches ever, for a fraction of the cost one would spend on deli or pre-packaged meat (yuck).

The last time he smoked meat, it was a beautiful Monday afternoon, and I snapped a few photos while he prepared the brisket and turkey breast before putting it on the grill. 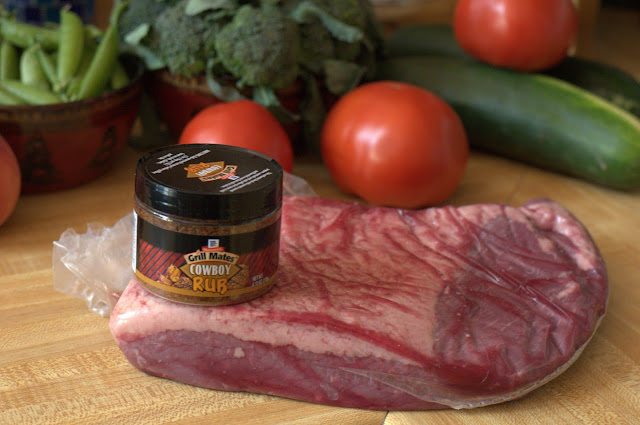 Check out the pretty goods from the Eagle River Farmer's Market in the background! I found a farmer from Sugar Camp there, Ever Good Farms, and next summer I'm going to be the first in line for their summer CSA - Community Supported Agriculture - membership. See that broccoli? Best we've EVER had. And the sugar snap peas? Fuggetaboutit. Fantastic.

Right - back to the star of the night. Brisket, rubbed with cowboy steak rub. 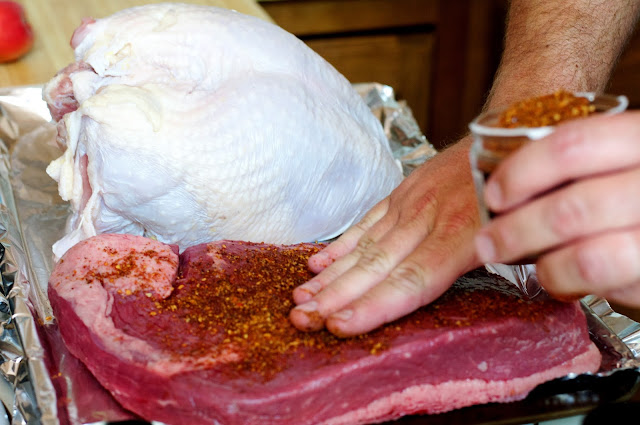 And the turkey breast, rubbed with Treager poultry seasoning. 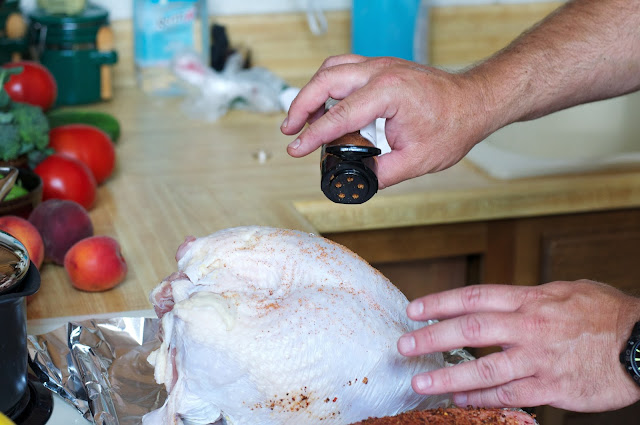 We tromped up to the garage, 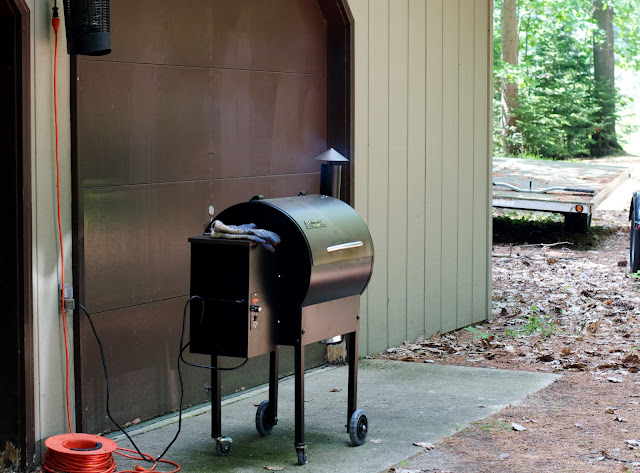 and Mr. Musky placed them both on the Traeger at 250 degrees. 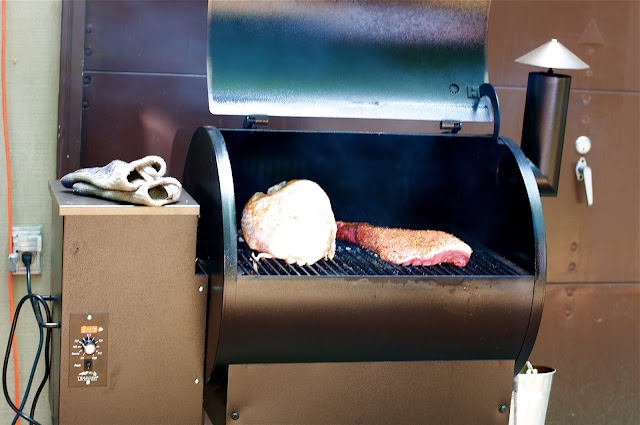 A couple of hours later, good, smoky, juicy things were happening up by the garage. 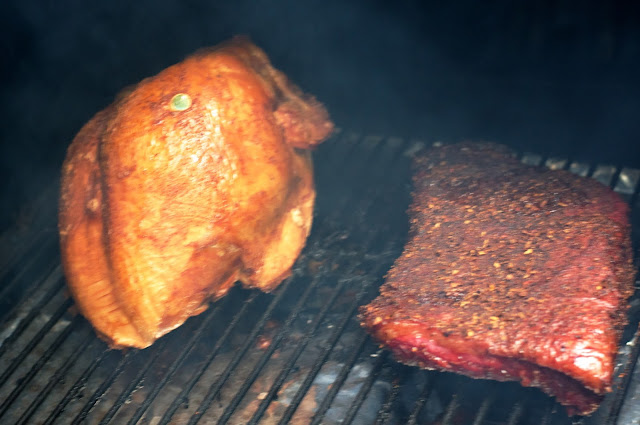 After three hours, Mr. Musky deemed the turkey complete, and the pop-up button helped confirm his suspicions. Trust me - this tastes as good as it looks. Better. Juicy, tender meat that is perfectly seasoned and rivals any bird on the Thanksgiving holiday. The smoker doesn't just "smoke" the meat; it acts as an oven, so the end result is a mildly smoky meat that is cooked evenly throughout. 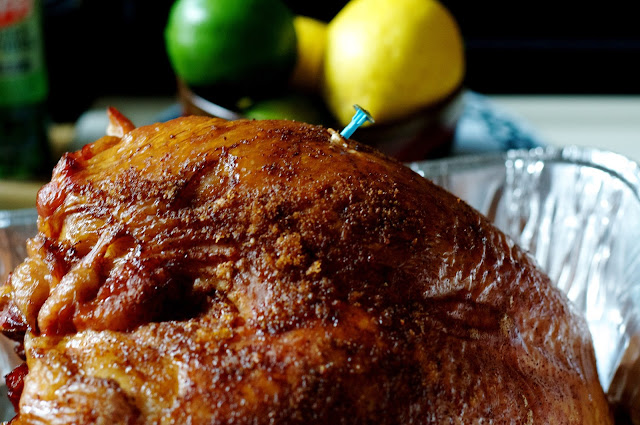 At this point Mr. Musky also took the brisket off the grill and determined that it needed moist heat for the remainder of it's stay on the Traeger. He asked me if we had any beef stock. "Nope, but we have wine," I helpfully offered. Which ended up being even better, in my opinion, than beef stock. He placed the brisket in an aluminum pan, poured about 1.5 cups of Cabernet Sauvignon over the meat, sealed it tightly with aluminum foil and placed it back on the grill for another three hours. 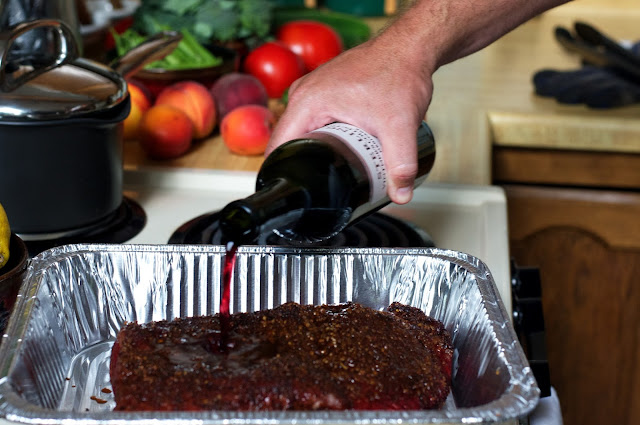 My plan was to show all the steps until we plated the final product. I intended to cook a medley of those fabulous vegetables to accompany the brisket, fix a refreshing, summer apéritif, and relax on the deck while we ate our dinner. We took Miller out on the boat so he could swim and burn some energy at the nearby little beach while the brisket finished cooking. But on the way home I managed to get sick and pulled the old heave ho over the pontoon.

When we got home I went to bed for thirty hours. Needless to say, there were no vegetables that day, I enjoyed the brisket as a leftover several days later, and the thought of an apéritif of any kind made things in the nether regions revolt.

But - here's a summer favorite. Consumed on a different day...like, today! Two ounces (or more, to your liking) of Ketel One Oranje (Absolut Mandarin works well too), a dash of Angostora Orange Bitters, two tablespoons of mint simple syrup (recipe found here), a squeeze of 1/3 of an orange, topped off with sudsy club soda and garnished with a slice of orange. 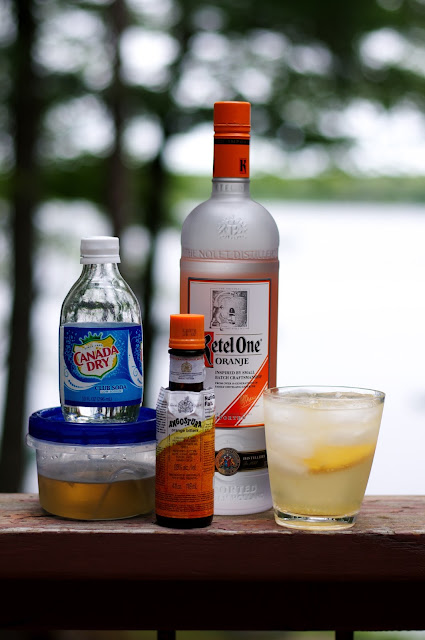 A delicious, refreshing summer cocktail to combat a chilly evening in the Northwoods, with temperatures rivaling the coldest night on record for July. Winter hats and bulky, unflattering sweatshirts are all the rage, man. 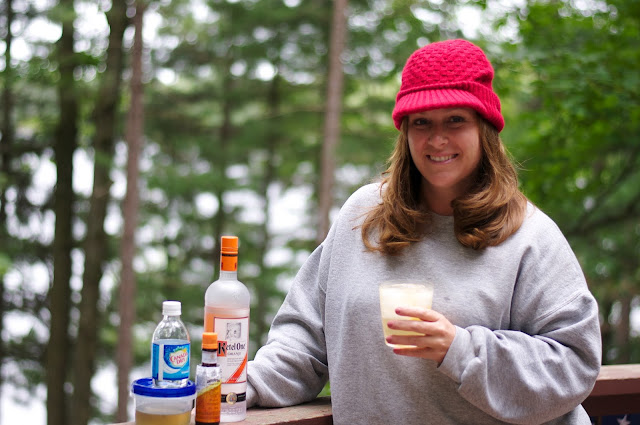 Even green tree froggies are searching for refuge. 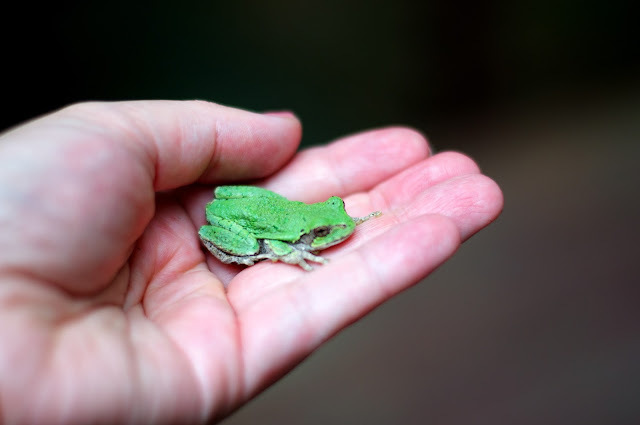 This gent occupied my Friday apéritif chair. I had to relocate the little bugger to some warm leaves in the woods. 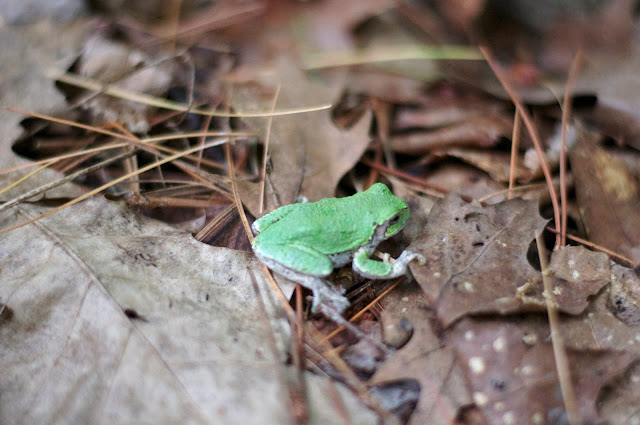 Enjoy some cool temperatures, throw open those windows and snuggle under a quilt tonight if you're in the upper Midwest! I LOVE THIS WEATHER!