Apéritif Friday - Date Night In, with Salmon and Vegetables in Parchment

A couple of weeks ago both kids ditched us. Their plans with other melodramatic teenagers trumped spending an exhilarating night in with Mom and Dad. Because hanging out and acting immature while taking pictures and videos of one another is such a blast. So Mr. Musky took me out on a date.

Except we didn't go out. And it wasn't really a date. But I highly recommend the following for highbrow entertainment.

Normally on nights like that, I'm like Sham. Uber fast out the gates, guzzling my apéritif while preparing dinner. Dinner like poached salmon and vegetables wrapped in parchment paper. Easy, fast, and delicious. With a glass of Chardonnay? Fantastic. So good, that I might have even had a second or third glass. With visions of a nap in the basement recliner in my imminent future, I planned on handing the race over to Secretariat, yet again.
After dinner I made my way downstairs, and Mr. Musky was all business. He wanted to try something new with me. Hmmmmm...I was curious.

Relax. And remember. My blog is PG...PG13 rated at its worst.

He pulled out his phone, which is somehow wired to our big screen in the basement (don't ask me how - it just is) and informed me that we were going to spend the night pulling up old youtube videos that highlighted our childhood.  A walk down our own personal memory lanes, if you will. He began by
playing a Cubs/Cardinals game from circa June 1984. The Ryne Sandberg Game. I protested. I was not in the mood to watch sports, much less a baseball game from twenty-five years ago. But I bit my tongue, reminded myself that Downton Abbey could wait, and indulged my husband. And started racking my brain. My turn was next, and I struggled over morphing a memory of building forts in the woods into a youtube video in the next five seconds. Because that's how I remember spending my time as a kid.

I cracked up watching the highlights of that game, because when Sandberg sailed a home run to the bleacher bums, I actually remembered when Bruce Sutcliffe swatted his glove in anger at the new ball the Cards catcher threw him. I watched that game with my dad.

Mr. Musky was on to something. I have scads of memories watching the Cardinals whoop the Cubs' butts over the years. I was a Cardinals superfan back then, because my family liked them. But I've since crossed over to the dark side, and no longer have any interest in baseball whatsoever like all other fair weather Cubs fans who've been heartbroken year after year.

My turn was next. I chose the only sports event that truly transfixed me as a child - watching Mary Lou Retton become the first US gymnast in history to win the all around gold medal. Mr. Musky was impressed. And complimented me on a good choice. He enjoyed watching the clip too.

He switched gears on his next turn and played the first ever MTV video. "Video Killed the Radio Star." Sweet.

Now my brain was swirling, the recall button fully functioning. "FRIDAY NIGHT VIDEOS! Remember the days when we could only view music videos on Friday Nights? I would make Chef Boyar-Dee pizza with Michelle and we would sit on the family room floor and eat the entire thing and drink a gallon of Pepsi out of the glass bottles you had to take back to Eagles for a refund while we watched Pat Benetar. We jumped on the couch singing into wooden spoons like real rock stars and thought we were so cool! Didn't you do that too?"

From there, we were like giddy teenagers, remembering the '80s through the magic of internet-based video.  Conan the Barbarian (his choice). Little House on the Prairie - when Laura pushed Nellie off the hill in her wheelchair, because she knew the little brat really could walk (mine). Six Million Dollar Man - "Isn't he awesome? I mean, don't you think he's good looking? Because of him, I started weightlifting. He was my hero!" (Clearly, Mr. Musky). Brady Bunch. Marsha getting the football in the nose. Itching powder in the sleeping bags. Lee Majors battling his ultimate foe. 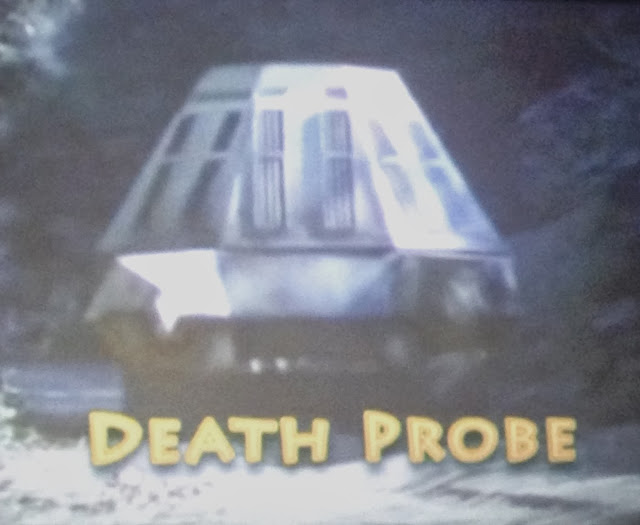 The introduction to the Love Boat. The entire segment to reveal who shot JR - the first true, effective cliffhanger of a TV series. In case you forgot, it wasn't Sue Ellen. It was Kristin, his mistress, in a fit of rage. Roscoe P. Coltrane punking Boss Hogg. Hilarious. The introduction to Fantasy Island, complete with Tattoo ringing the bell and shouting, "De Plane! De Plane!" Laverne and Shirley working it in a factory in Milwaukee. The Man razzing Chico in his garage (that was a first time viewing event for me - I'd never even heard of that show). Archie Bunker, in his recliner, ragging on the Democrats to a confused, befuddled Edith. 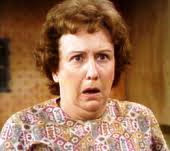 And then I lost him. I made the fatal error of choosing a two minute Ronald Regan clip on Democrats. He pulled up Regan's thirty minute speech at the 1968 Republican National Convention. Then the entire Regan/Carter debate.

Fifteen minutes into the historical political segment of our date, I went to bed. I don't think he noticed.

But while it lasted - we had a blast. So if you're having a tough time coming up with something to enjoy with your sweetie - I recommend a youtube video marathon. The turn-taking added a surprise element that we both enjoyed.

As for the dinner? It seriously couldn't be simpler. Slice up a bunch of vegetables into similarly sized pieces. We used carrots, zucchini, leeks, red pepper and mushrooms. 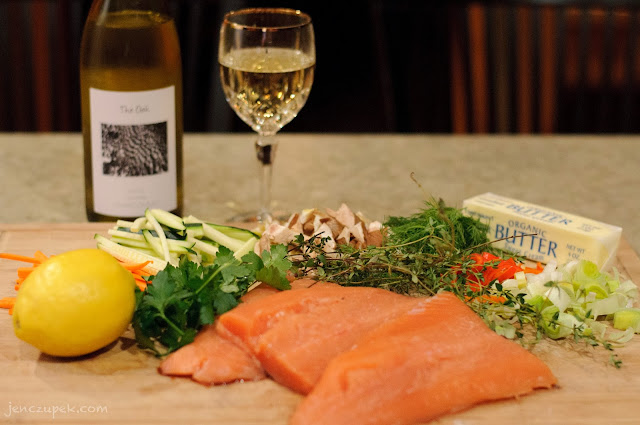 Cut a piece of parchment paper in the shape of a heart, and pile up the vegetables on one side. I also used fresh dill, thyme, and parsley. Season them with salt and pepper. 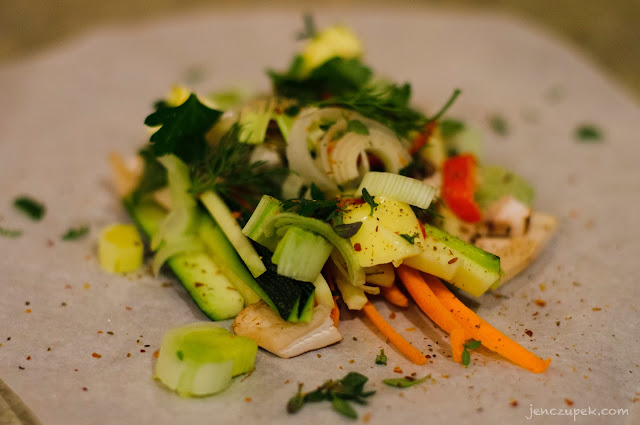 Lay the salmon on top of the vegetables and season the fish as well. I used a "Seafood Grinder" which includes salt, pepper and a blend of spices. Give the mound a squeeze of lemon (or lay thin rounds of lemon slices on the food) and dot it with about a tablespoon of butter cubed into small pieces. 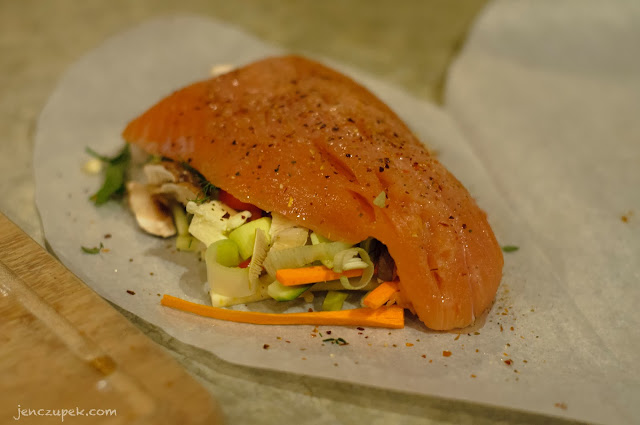 Fold the other half of the heart over, and starting at the top, fold and crimp the edge of the parchment paper around the food. 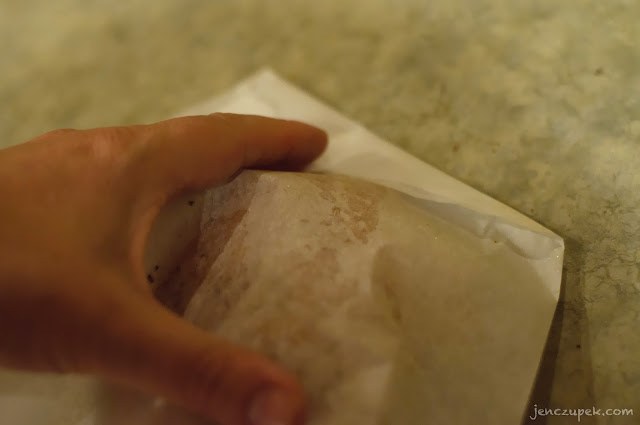 Fold and crimp all the way down to the bottom of the package, and before sealing the last piece, splash a bit of white wine into the pouch.

Repeat for the rest of the pouches. Place them on a baking sheet and bake in a 400 degree preheated oven for 20-25 minutes.

Carefully open each package with kitchen scissors and slide the contents onto a plate. The salmon and vegetables steam in the pouch creating a healthy, fresh meal with virtually no mess. This is a great option for dinner parties when you want a WOW factor while enjoying time with your friends. The pouches can be prepared ahead of time, just pull them out to come to room temperature 20-30 minutes before cooking them in the oven.

And get your friends to join in on the youtube fun! It would be great to see what friends and family come up with in terms of their own memory lanes. I can't wait to play again.

But politics will be deemed off limits.