Halfway Home on the Whole30

Temperance kicked insolence to the curb. Our careening Whole30 train is gliding over the tracks, the serene landscape lulling us into an arcadian state of mind.

It's peaceful around here. Tranquil. We are all well rested, nourished, and feeling fantastic. Well, except Jake, who was diagnosed with strep throat yesterday. The nurse weighed him as standard operating procedure, and shrieked "WOW!" in disbelief. He faced me in the exam room as she recorded his vitals, so he didn't see the number. Curiosity prevailed, and he asked. She told.

The kid weighs 151 pounds. He's down ten pounds...fifteen since his physical in the summer. And he grew an inch. The nurse and the doctor asked several questions about our plan. So we explained it to them. Pretty amazing stuff. They were so intrigued that they wrote down the name of the book and are going to check it out for both themselves and other patients who need a healthy kick-start.

And the beauty? We are not hungry. We are loving the food we're eating. We feel satisfied, every day, after every meal. From a food perspective, we're killing this thing. Our neighbor noticed significant changes in how Kahley looks, and is looking into adopting the changes we've made for her own family.

There's no whining to report. No murderous thoughts. Mild cravings visit Kahley in her sleep - she dreams of dining at Burger King with her friends because there's nothing else to eat.

I never buy KFC. Never ever.

Yes. The dude wants a drink. He tried to talk me out of everything last Friday night, convincing me that he's learned a lot, he agrees that we need to keep processed foods and sugar out of our diet as much as possible, and how amazed he is at how he looks and feels after just two weeks. So clearly, we can stop now because, obviously.

I stuck to my guns. We are coasting forward. And we are all sticking to the rules.

Even though he gives me crap every single day, what I most love about my husband is his passion for anything he dives into and takes on. So while he'll tell people, "It's not the Whole30, it's the Whole Thirty Grand with the amount of money she's spending on food," or "Why can't we eat Slow Cooker Mississippi roast? That shit tastes good!" he is also looking up the why behind some of his favorite things. For example, today he read me an entire article about insulin and the glycemic index and why sweet potatoes are better for us than regular potatoes, because he thinks he really misses white potatoes (he doesn't. I know this. I'm patiently waiting for him to come to his own conclusion). He's realizing that nearly every food we love can be recreated Paleo style, which is entirely more healthy and satisfying.

Enough about what we aren't eating and drinking. Time to celebrate what we ARE enjoying on this plan.

Awesome breakfasts. For years I've given my Dad crap about eating too many eggs. Turns out the eggs are not the evil culprit - it's the over processed bacon, toast, loads of butter, jelly and milk that aren't healthy.

If you're used to eating cereal and are usually ready for a snack or the hunger pangs embarrass you in a mid-morning meeting, try this. A couple of eggs scrambled with a handful of spinach, topped with chopped avocado and some fresh strawberries. I'm satisfied until noon or 1:00. 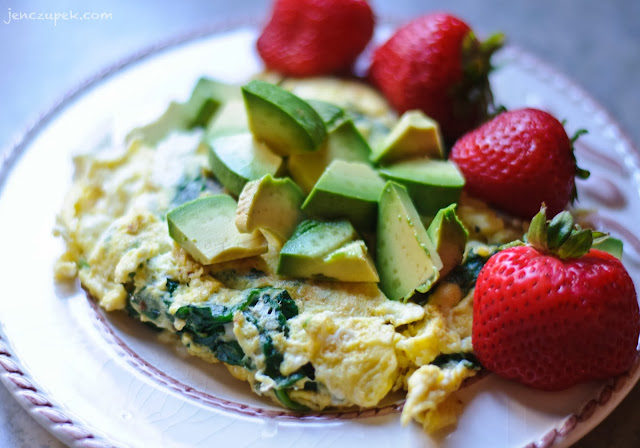 This is one of my staples - frittata. This one was made with Applegate's chicken and turkey roasted red pepper sausage, spinach, yellow pepper and onion. 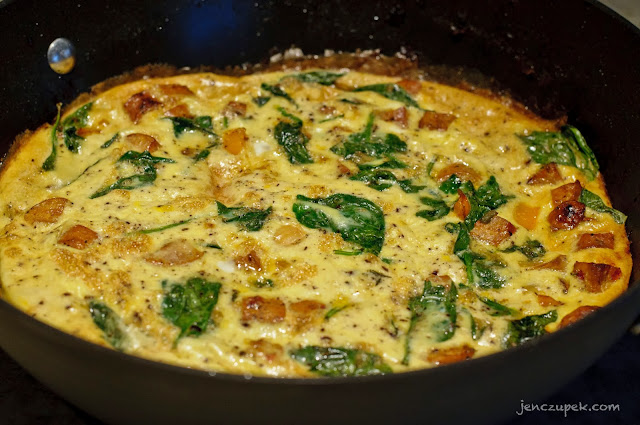 It's a cinch. I sautéed the sausage, onion and pepper in some ghee, then added the spinach to wilt it a bit. I whisked twelve eggs in a bowl, added some seasoning (cumin, salt, pepper, garlic powder, dried mustard, onion powder), ensured there was enough fat to prevent sticking in the pan, and poured them in. I transferred the skillet to a 350 degree oven, poured myself a cup of coffee, and chatted up Mr. Musky about all sorts of unimportant things in the living room while Miller whined for attention. 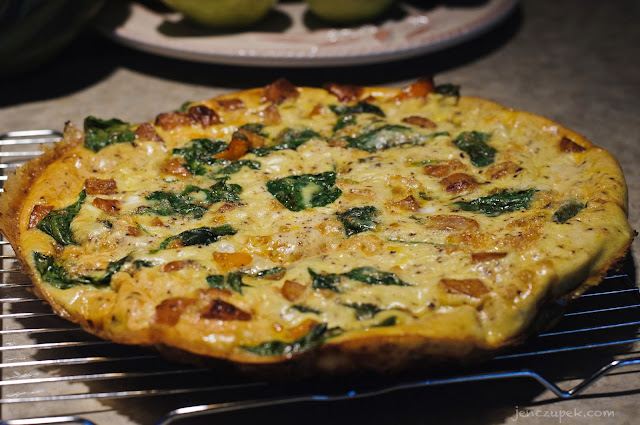 After twenty minutes, I slid the frittata out of the skillet to a wire rack to cool. I cut us both an eighth and added some Whole30 approved bacon, tomatoes, avocado and strawberries. 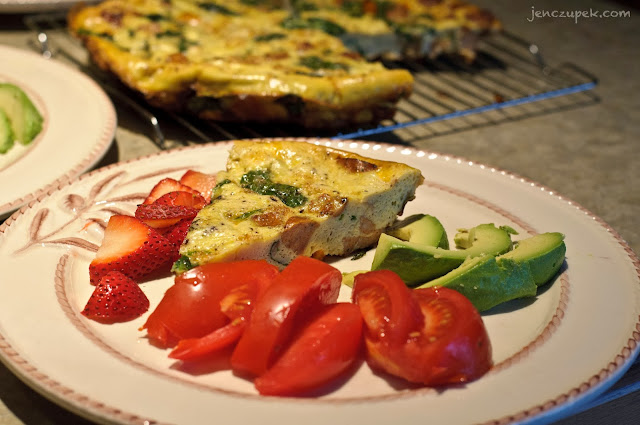 Deliciousness. And the most beautiful part? I wrap the other six pieces individually in plastic wrap so breakfast is a no-brainer for the next few days. I also made this with a leftover skirt steak fajita dinner and liked it even better. The possibilities and combinations for frittata are endless.

Now that I'm used to eating heartier breakfasts, and after slaughtering my mid-morning snack cravings, I am FULL until lunchtime, when I'll simply slice a pear and warm up leftovers from the previous night's dinner...a garnet sweet potato and pork tenderloin stuffed with sautéed onions, celery, carrots, mushrooms, kale, figs, apples and blanched almonds. 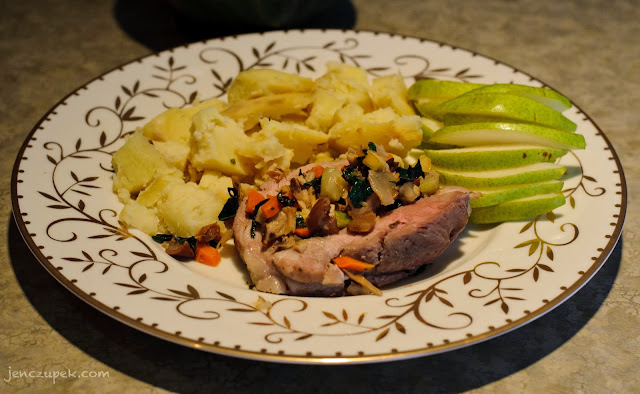 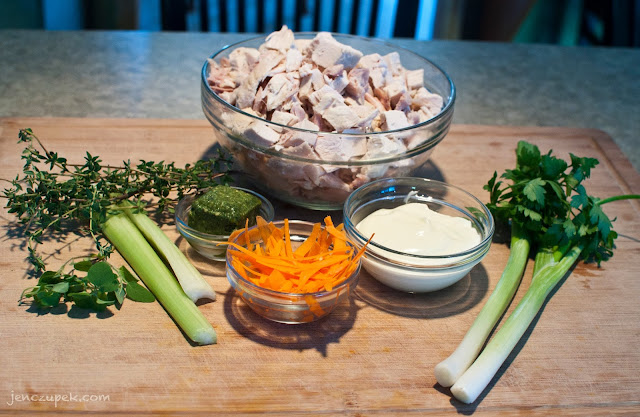 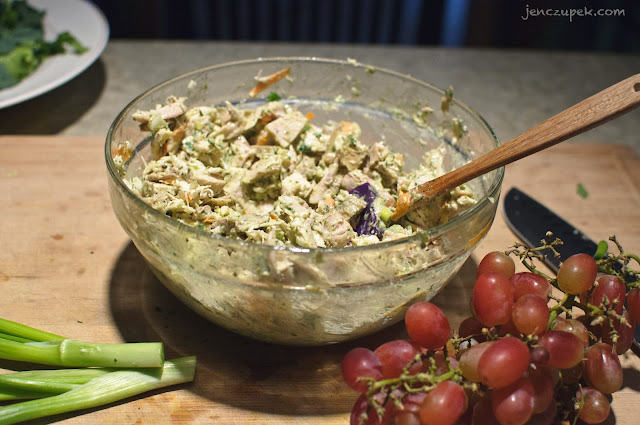 ...and throw it on some mixed greens with sliced apples and grapes, while paying homage to the Owen side of my family by including a couple of green onions to munch on. It was just me that day, and I worked on the book all afternoon, so only Miller fell victim to my oniony breath. 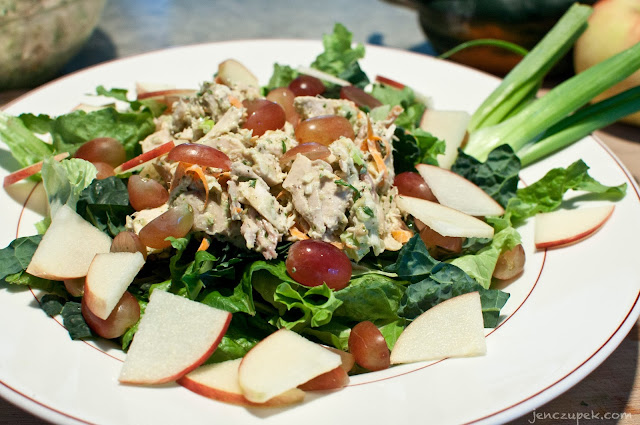 Yes. I actually made my own mayonnaise. And loved it! Jake miraculously ate it with this bison bacon burger for lunch when he was home sick with me, only because I called it white sauce.
I guarantee he wouldn't have touched it if I said it was mayo. He even ate some that I converted into tartar sauce one night for salmon cakes, which was one of our faves - it's a twist on a recipe in the book that I'll have to share at some point.

The point I'm making is that, to quote my lovely husband..."This shit tastes good!"

Happily clacking along and halfway home on our adventure...