We had a little accident on Christmas Eve.

Initially, everything hummed along perfectly. We attended a beautiful church service in the afternoon so we could return home and start cooking before the rest of the family arrived to celebrate. Uncle Brian and I fried the pierogi. My mom baked some rolls and assembled a cheese platter while Mr. Musky warmed up the Bookbinder soup I prepared the day before. Since it was freezing, we stored the soup on the deck as we were short on refrigerator space. He placed it on some tiles outside so it wouldn't melt anything, only to have all the tiles stick together. When he brought the pot of soup inside, three or four tiles were still attached to it. He tried melting them off with a hair dryer, to no avail. So after the rolls were baked, he lowered the temperature of the oven and put the entire mess inside. Every few minutes he pulled it out, loosened a bottom tile, then placed the contraption back into the oven to further melt them off.

"OH SHIT!" I heard in his very best freakout voice.

"The glass in the oven door just shattered when I rested the pot of soup and attached tiles on it." 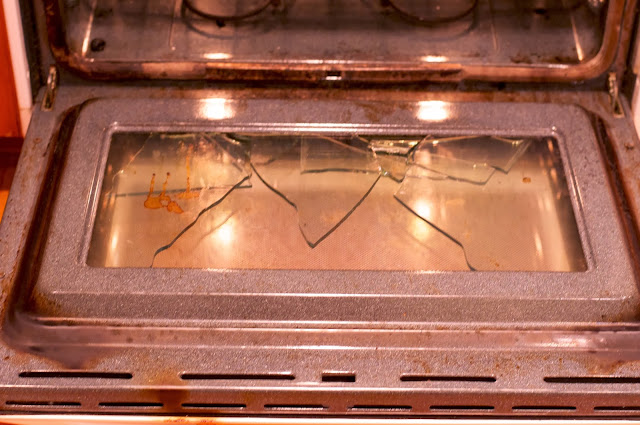 I know my husband, and when he causes a catastrophic problem just minutes before twenty family members descend, it is not pretty and can drastically alter his mood for the remainder of the evening. Enter Superwoman to the Rescue.

"No big deal, hon. I'll just run next door to bake the fifty other things that need to go in the oven tonight. And luckily, you have a lot of twenty-something cousins that always ask what they can do to help. They'll be our runners."

And that's exactly what we did. My neighbor, Lisa, was not using her oven and was heading out to her own family's Christmas party, so she graciously left her front door open and her oven on for us to use throughout the night. Problem solved.

Did you know there are actually three panes of glass in an oven door? And if you break the inside glass, it does not go all over the floor? And you can actually still use the oven, but it is not recommended to turn it up over 350 degrees? It can still keep food warm, and you can even cook a Christmas Day decadent prime rib in a broken oven.

Thank goodness, or we would have been running out to a Chinese restaurant the next day.

Once we cleaned up from Christmas morning and relaxed for a few hours, we prepared a fabulous meal that was even two-thirds Paleo. We splurged on some potatoes, though. Our meal was simple, but over-the-top delicious, and I recommend this menu anytime you want a fancy dinner, are out to impress, or just want to dine all grown-up style. This is the perfect menu for New Year's Eve. Unless you are gussied up to go out, spending hundreds of dollars while standing around with a million other people, sipping on $50 glasses of champagne. Then maybe you'd like this one on New Year's Day.

We ate our meal in the dining room. Mr. Musky commented on how beautiful just four place settings looked after the chaotic, albeit fun and family-filled previous days. 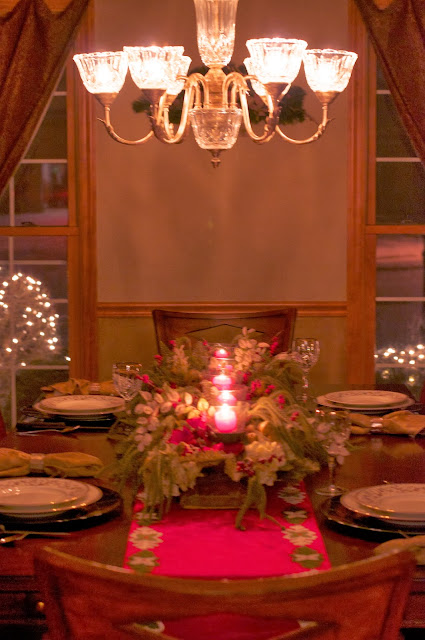 Simple, yet achievable. Here's how we did it.

Buy a choice rib roast. Many would suggest that you have to buy prime, but I disagree. If you prepare it this way and don't over or under cook it, choice is fantastic and will save you about 40 bucks. I looked for a roast that had three ribs, as we knew we wanted leftovers. We've learned over the years that you really need just one rib for every two adults. Don't make the rookie mistake of buying a rib for every person, unless you want to break the bank and eat leftovers for two weeks.

Mr. Musky has a thing about preparing the roast. I have never done it. Ever. Here's what he does: 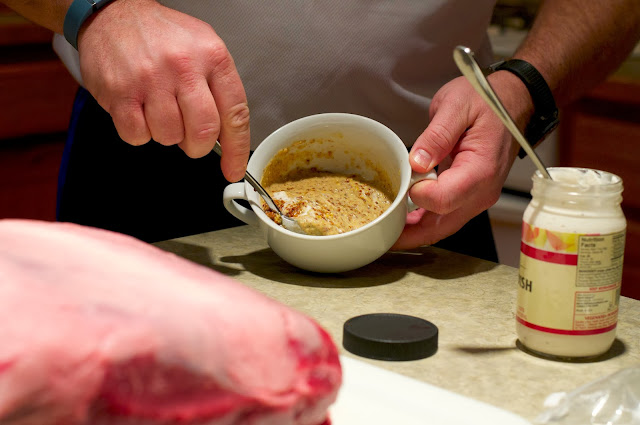 Mix a thick sauce of dijon mustard (or any German mustard), stone ground mustard and prepared creamy horseradish. Roughly 4T of each mustard and 2T horseradish. This is definitely not an exact science, nor does it need to be. Just combine the ingredients and give it a taste. Begin by slicing back the fat cap on the top of the roast, but don't slice it all the way off. 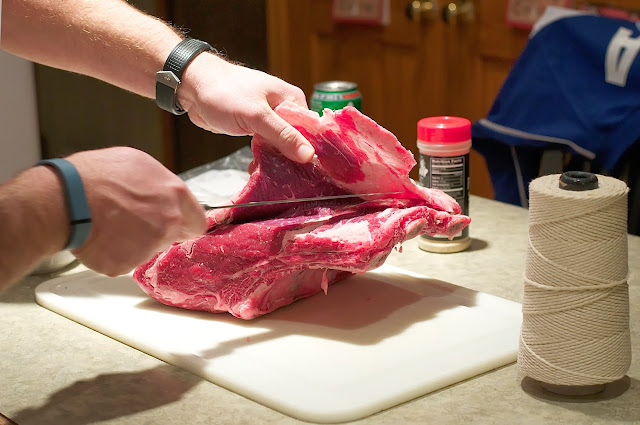 Once opened, pour some seasoning all over the roast, 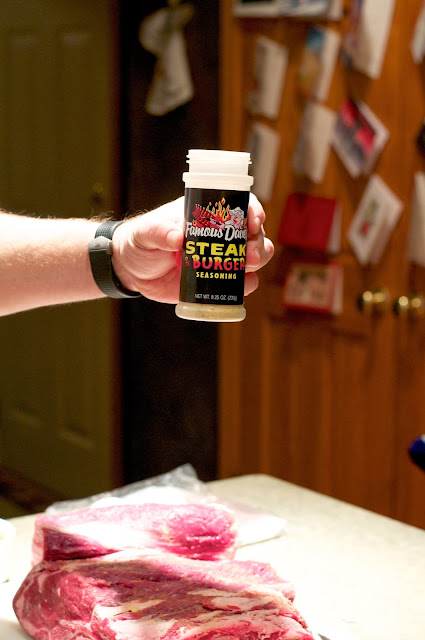 poke some garlic chunks into the meat, 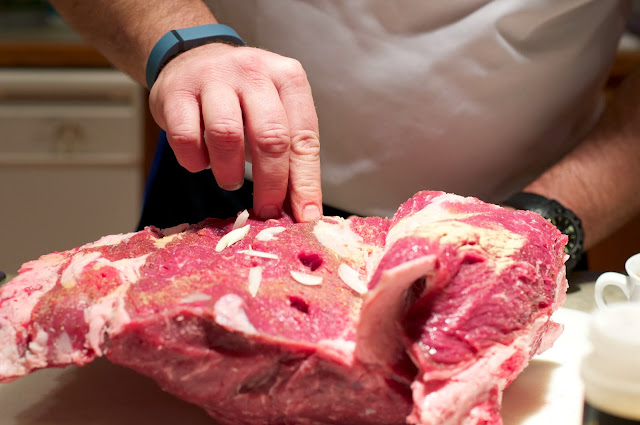 top it with thinly sliced onions, freshly chopped thyme and oregano, and place the fat cap back over the meat. Tie up the roast with kitchen twine to keep it all in place. 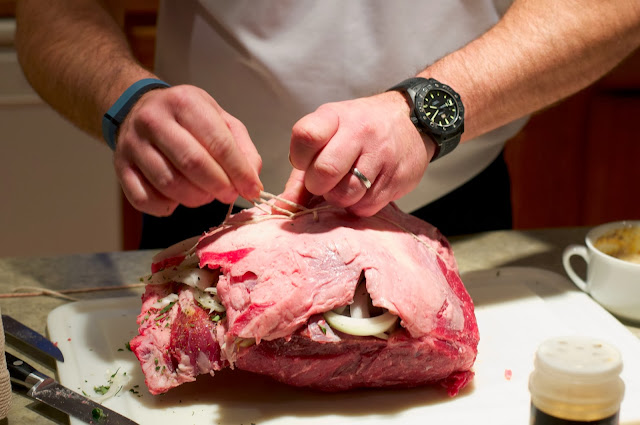 Then paint the roast with the mustard-horseradish mixture. 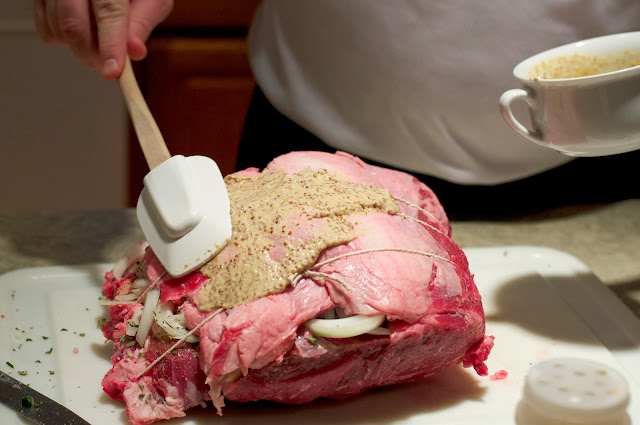 Place it on a rack in a roasting pan, pour some red wine in the bottom of the pan, and add some beef broth (about a cup each). 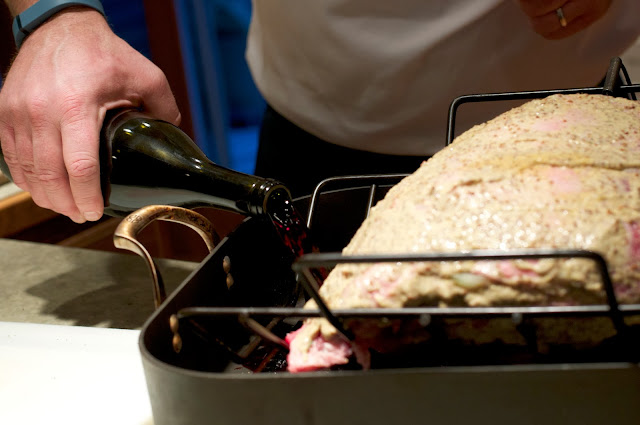 Cook the roast in your broken oven at 350 degrees and until the internal temperature reaches 140 degrees. Then let it rest for 15 minutes before carving.

For the loaded potatoes, you will need: 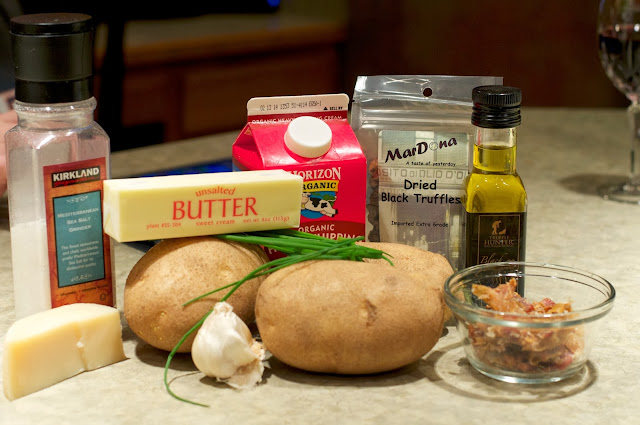 3 large russet potatoes
1/3 cup heavy cream at room temperature
4T butter, room temperature
Optional: leftover fried bacon and onions from Christmas Eve that were served alongside the Pierogi (or you can just fry up a couple of pieces of bacon and a few slices of onion)
1-2 garlic cloves, microplaned
1-2T chopped chives
1/2 cup shredded cheese. I had leftover sheep's milk cheese, which was mild, slightly nutty, and perfect for this. Any white meltable cheese would do. Gouda, Parmesan, White Cheddar, etc.
Salt
Dried Truffles, gifted to me from the ghost of our kitty cat, Madison, on Christmas morning
Truffle Oil, gifted to me from Miller on Christmas morning

Peel the potatoes, cut them into thirds, and place them in a saucepan of cold water. Add a couple of teaspoons of salt, and bring to a boil. Meanwhile, hydrate about a tablespoon of dried truffles in lukewarm water until just covered. Once they are soft and pliable, chop finely and set aside. Save the truffle infused water - it's like nectar! 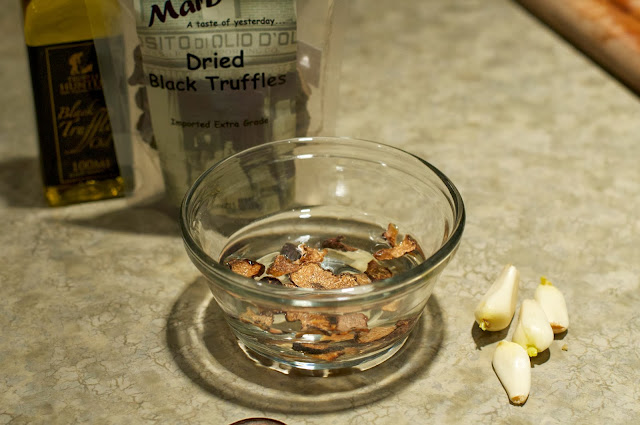 Continue to gently boil the potatoes until they are fork-tender, then drain. Squeeze them through a ricer (a must, in my opinion, for perfect mashed potatoes) or mash them by hand until no lumps remain. Place them back into the saucepan over low heat. Add the heavy cream, and stir with a wooden spoon until blended. Add the butter, and stir until melted and incorporated. Toss the remaining ingredients into the pot except the truffle oil and and combine. Add a teaspoon of truffle oil, stir to combine, then taste the potatoes, adjusting salt and truffle oil as necessary. You definitely don't want to go overboard with the oil, but add enough to give some richness to the spuds - probably no more than two teaspoons total. Stir to combine all the ingredients, and if the potatoes are still a bit thick, add the truffle water in small amounts. The infused water brings it all together and softens up the potatoes to the perfect consistency. Give everyone in the family a taste so they know what's coming, then cover and place the potatoes in the microwave to keep warm.

Look what I found! 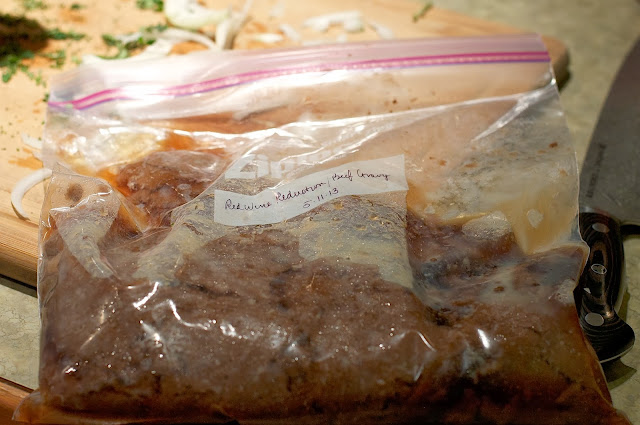 I do this all the time. If I have any kind of succulent juice or broth or stock leftover from a meal, I save it. I don't even know what we made on May 11, 2013, but it looked perfect to make some gravy with. I warmed it on the stovetop, poured it through a sieve to remove chunks of onion, then returned it to the saucepan. I whisked 2T flour (you could also use arrowroot) with 2T of cold water to make a slurry, eliminating all lumps of flour. I then poured the flour / water mixture into the gravy and boiled it for a few minutes to thicken it a bit. I'm not a fan at all of thick gravy; in fact, I wouldn't have even thickened this stuff, but my family requested it. Wish granted. If you don't have a gravy base frozen, just google red wine reduction and pick a recipe. It's pretty simple. 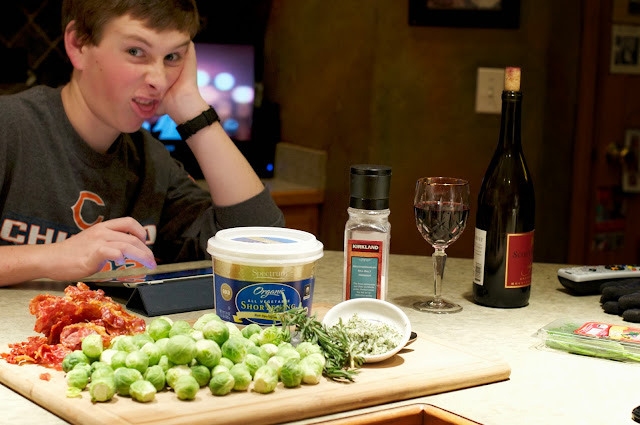 While the potatoes were boiling, I fried about 10-12 pieces of Proscuitto di Parma in a frying pan until crisp while I sipped on our favorite December Apéritif. 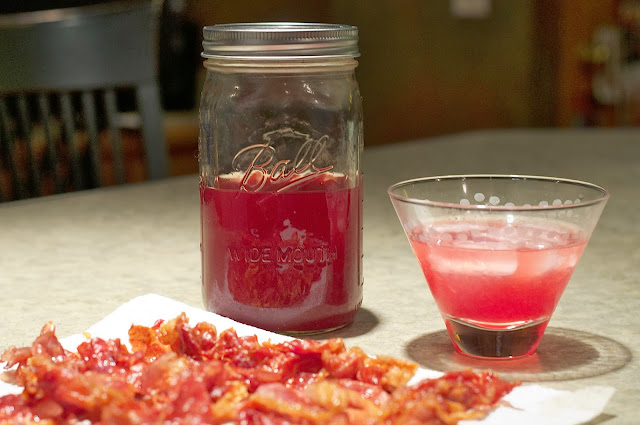 Meanwhile, melt the palm oil in a large skillet. I had mine on low all night so it would be ready to go, then jacked the heat up to medium to ensure it was hot enough for frying, but not too hot to scorch the sprouts. Plop a couple of sprigs of rosemary in the skillet, along with half of the brussels sprouts. Fry for 3-5 minutes, flipping them around in the oil, until they just start to brown and crisp up. 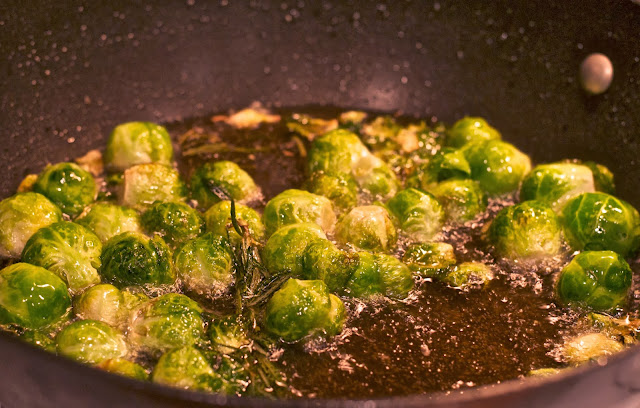 Remove them with a spider spoon onto a paper towel lined bowl, and sprinkle with salt. Repeat. Remove the crispy rosemary (it's now off the sprigs and is free floating with the vegetables) and mix the brussels sprouts with the fried proscuitto. Toss in the minced onion and herbs and give it a stir. 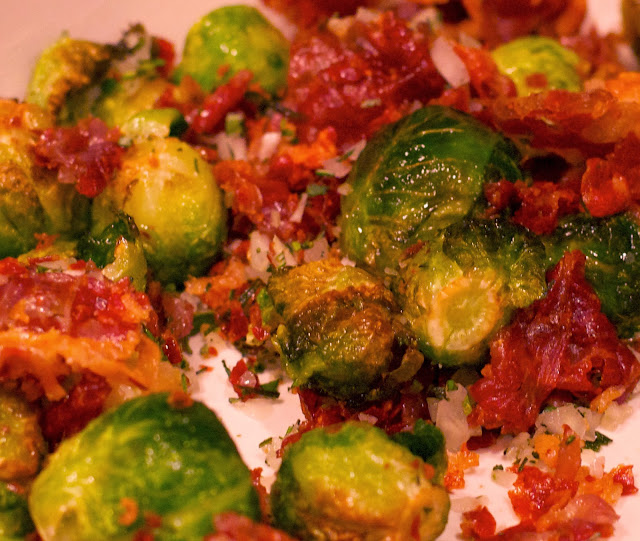 The picture doesn't do it justice. The crispy texture with the salty meat and the Christmasy colors? Divine. Normally I don't spend this much time on vegetables, but adding a little effort and fancy prep brings them over the top and makes a stunning side next to the succulent beef and ridiculous potatoes. 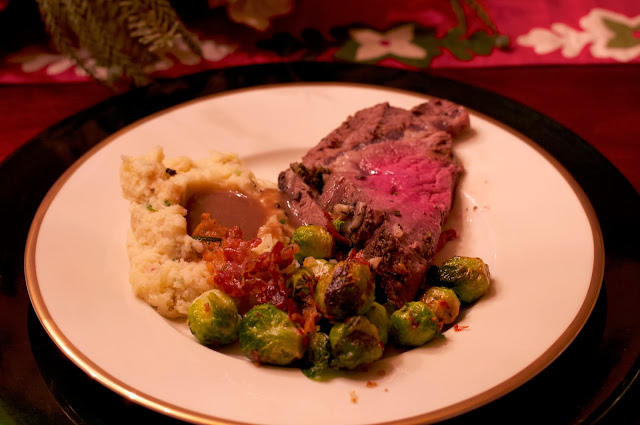 Miller didn't get any. 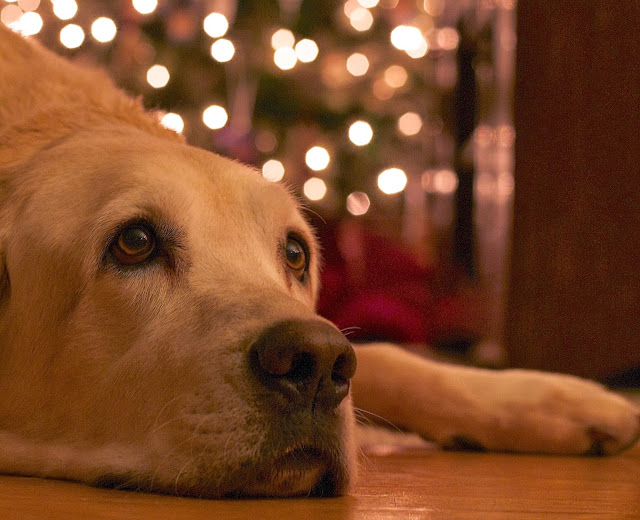 Thanks to lots of drooling and sneaking plenty of bites to eat, his Christmas Eve hangover lasted until yesterday. We walked him down the lake to a little trail through the woods. Now he's hungover again. He wouldn't even move a foot for a peanut lying on the floor in front of his nose. Mr Musky moved it closer for him. Spoiled, tired boy.

I'm off to enjoy the New Year, Northwoods style, with just these three. 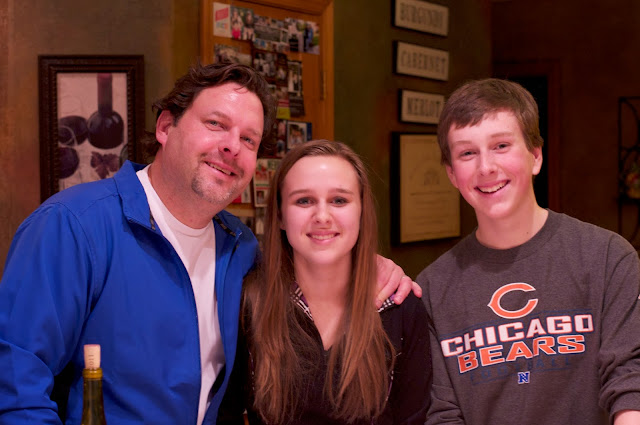 We've already snowmobiled, dined out, caught a local semi-pro hockey game and some live bluegrass music. There's a couple of movies on the wish list of things to do, as well as a certain football game we are currently watching that a lot of folks are interested in around these parts.

Happy New Year, and thanks for reading. I wish you all much health and happiness in 2014.