The Apéritif Friday portion of today's post is quick and easy, because I've got to tell you about something very disturbing. So let's get the obligation out of the way. 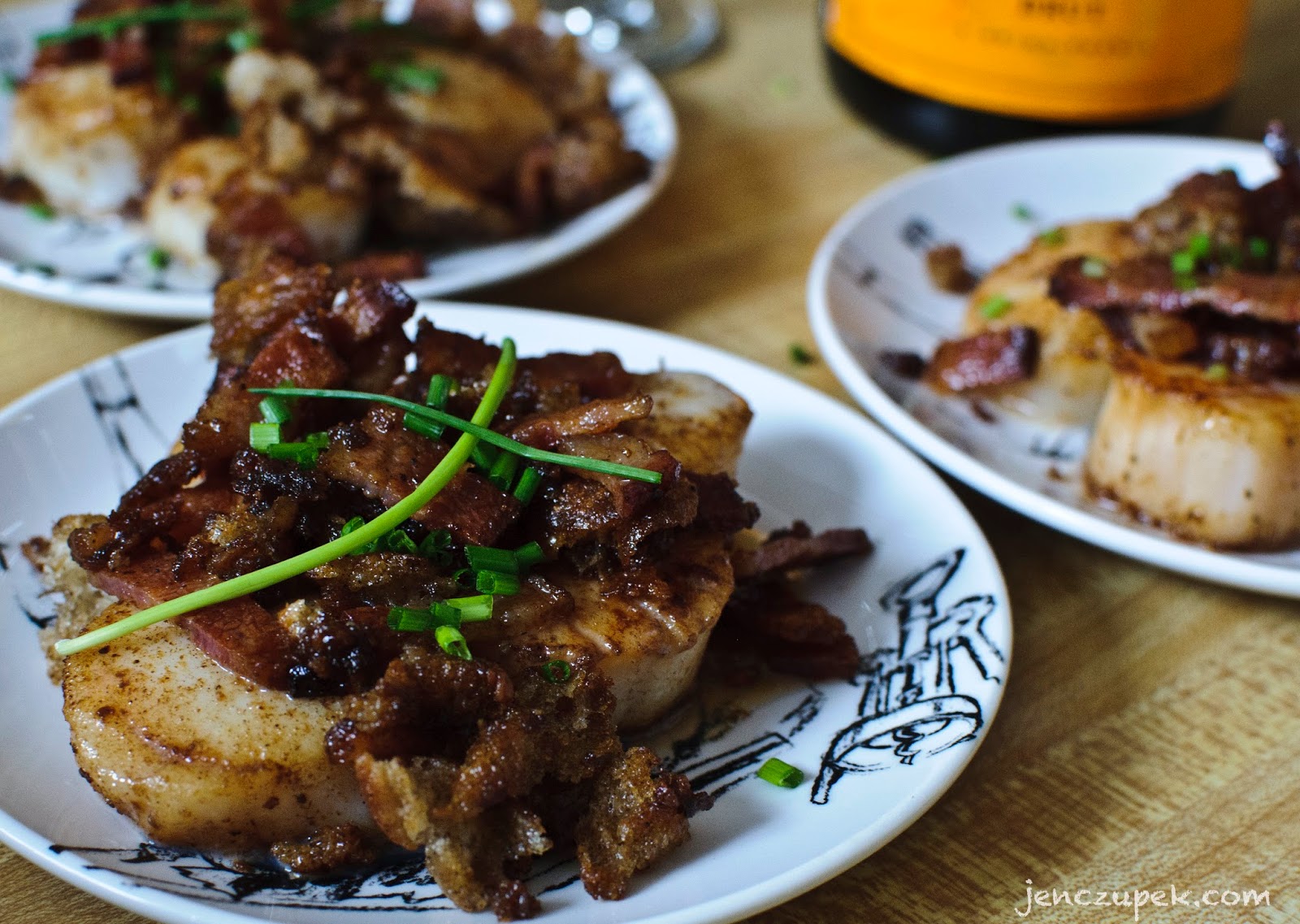 Trust me when I say you need these in your life. Here are the ingredients for three to four appetizer plates:

Crisp the bacon in a pan, chop it up, remove to drain on a paper towel and leave a tablespoon of grease in the pan. Add a teaspoon or so of butter to the bacon fat, melt it over medium-high heat, then toss in the breadcrumbs, stirring until crisped like croutons. Remove the bread from the pan and wipe it clean. Ensure the muscle is removed from all the scallops (you'll see it on the sides of them), dry them THOROUGHLY with paper towels, season with salt and pepper and set aside. Brown 1-2 tablespoons of butter in the pan on medium-high heat until it just starts to turn brown. Don't burn the butter - watch it closely. Once it just starts to turn, add the scallops. Brown for about three minutes or until the scallops are golden brown. Turn them and cook for three more minutes or until just opaque in the center. DO NOT OVERCOOK! Scallops are delicate little suckers and will turn rubbery and nasty if you cook them too long.

Place the scallops on a cute plate, garnish with the bacon, breadcrumbs and chopped chives, and serve with a sparkling glass of dry champagne. 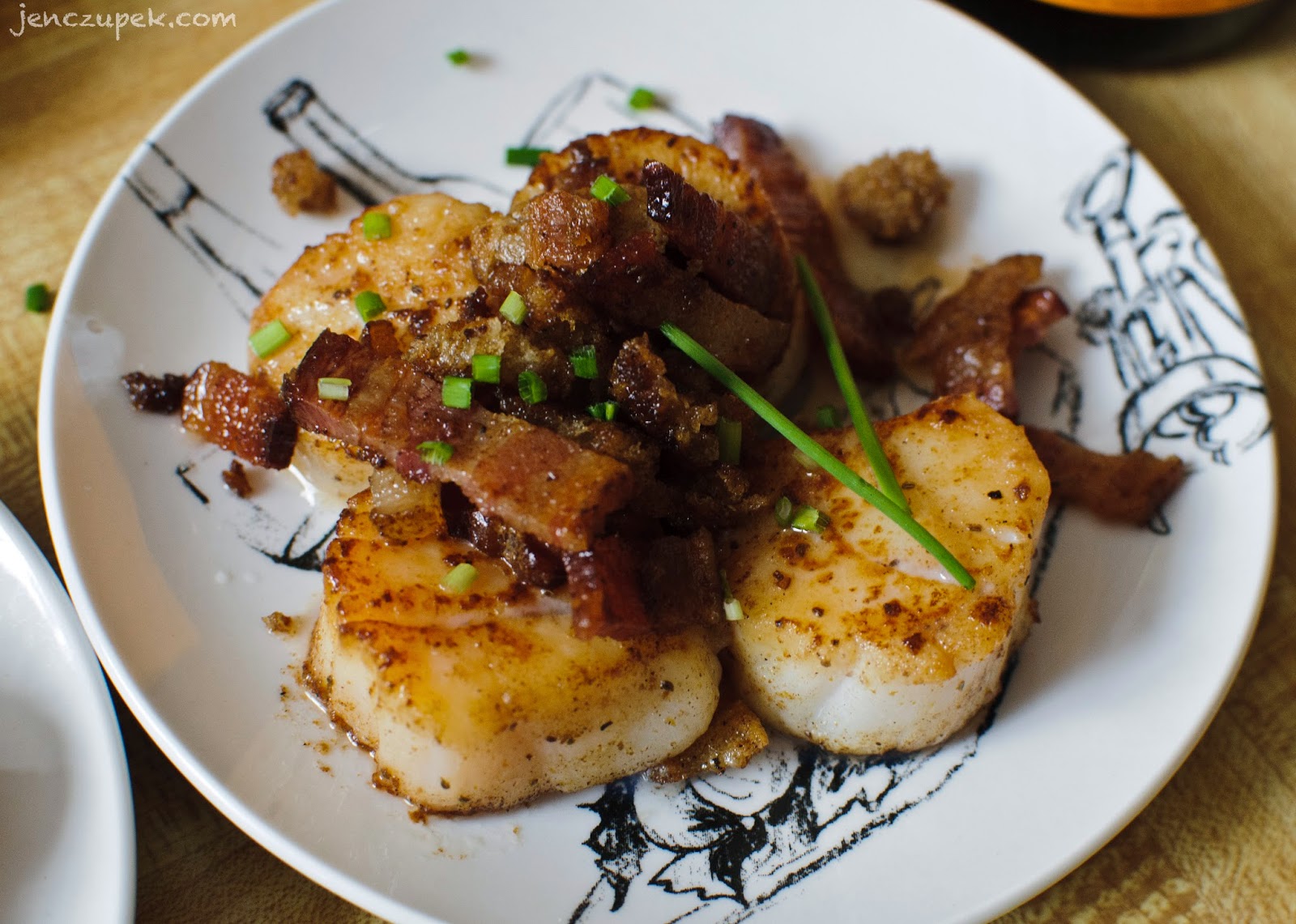 Pure, decadent goodness on a plate. And the champagne tastes like a bubbly slice of heaven with them. Make this. You'll thank me.

Now...on to more entertaining stories from New Year's at the cabin.

Stumbling around Amazon in December, I came across an adult party game. Now don't go there...I'm not talking about the X-rated kind. More like R rated. R Rated Plus. Santa must know us well, because he only brought us two presents this year. One was Trivial Pursuit Kids vs. Parents so our children will indulge in Mr. Musky's cabin obsession and are more apt to engage in a game that lasts thirty minutes versus thirty hours.

The other gift from Mr. Jolly came in a black box with white letters. 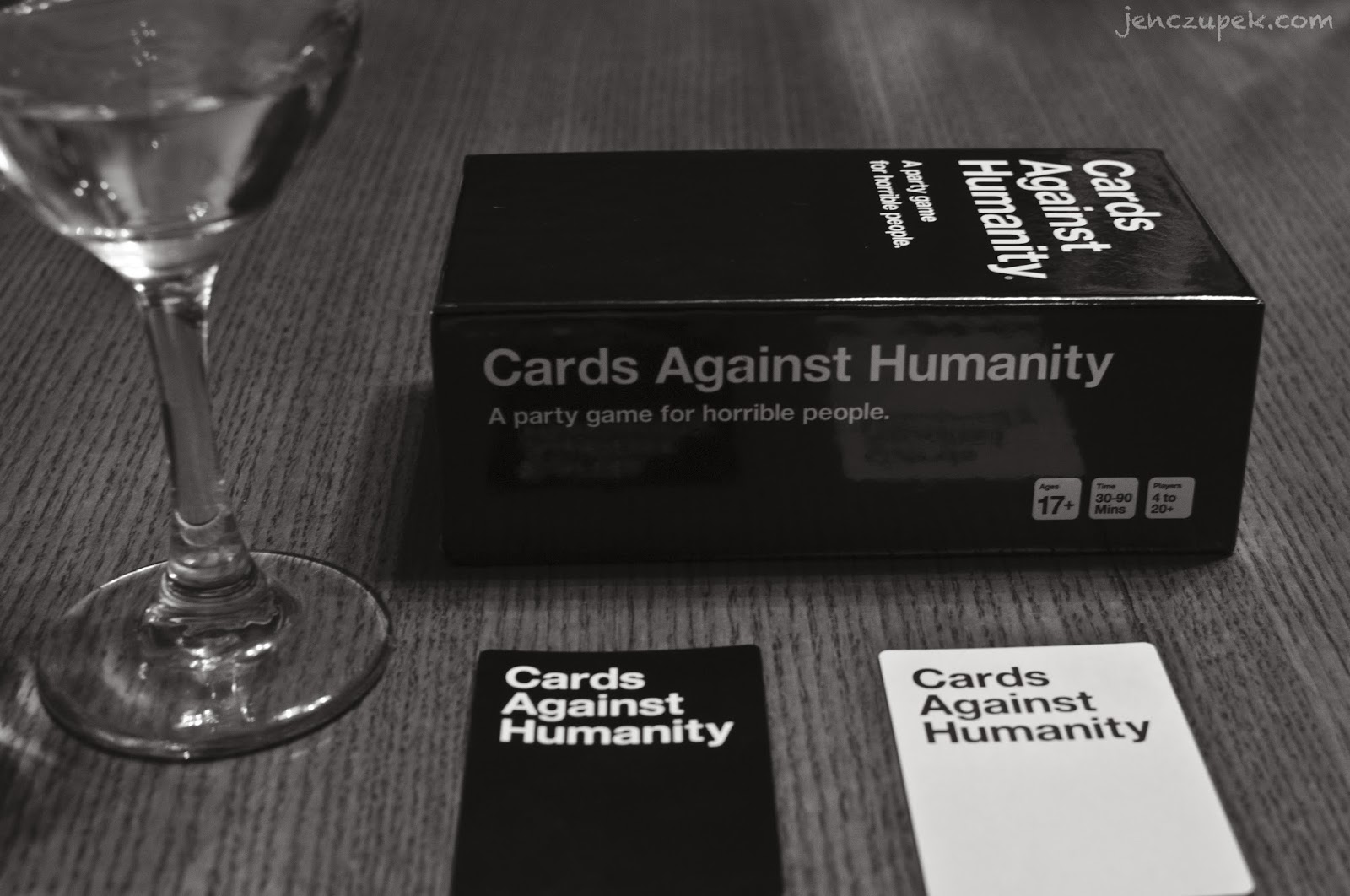 Cards Against Humanity. You won't be finding this at your local Target. They'd probably get sued for selling it. It's awful. Filthy. Appalling. Politically incorrect. Dripping with sarcasm. Like the box says: for horrible people. In other words, it's perfect for my family. 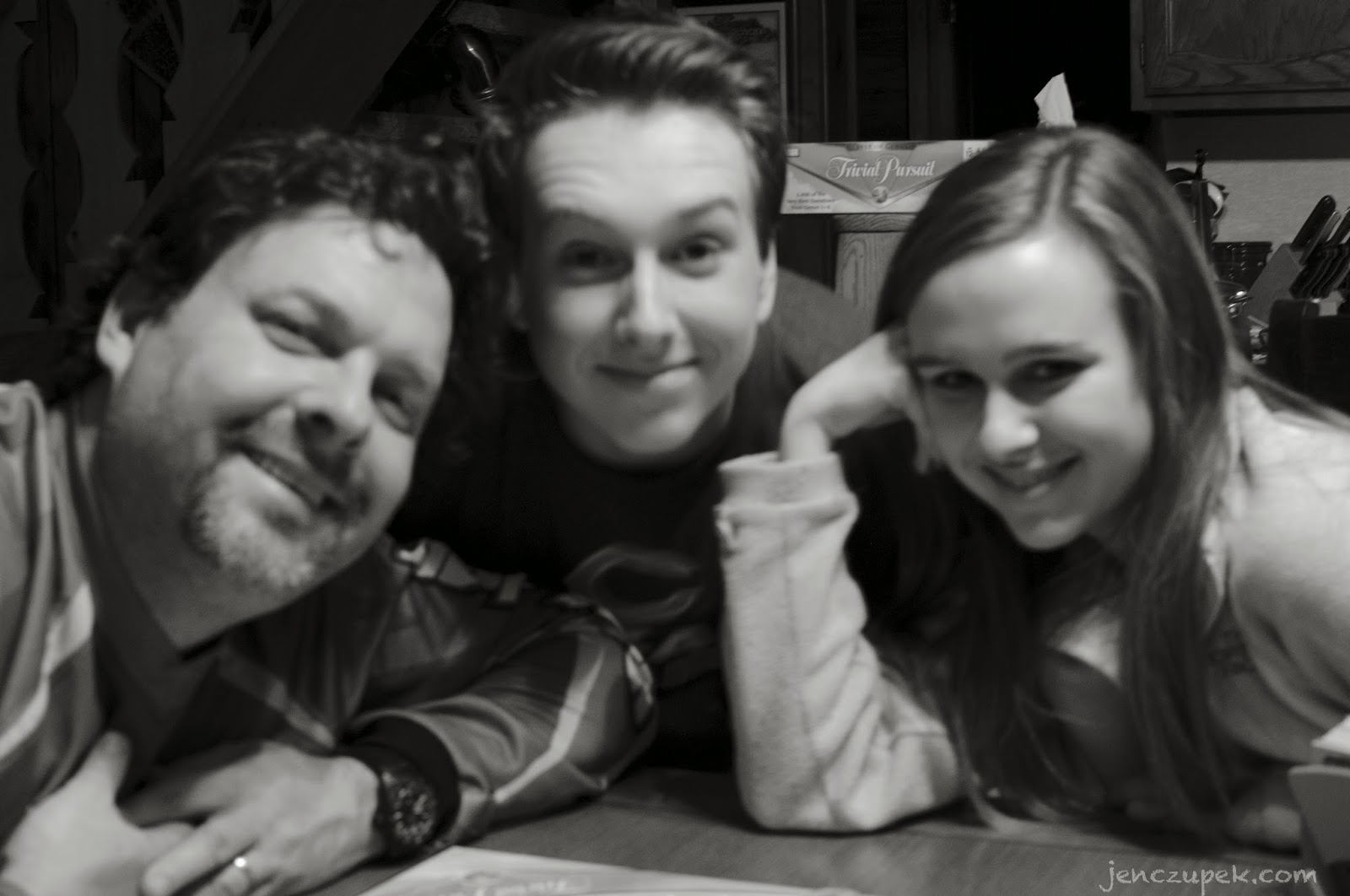 The game is simple. If you've ever played Apples to Apples, you know how to play Cards Against Humanity. The only differences are that you get ten cards in your hand to play with (allowing for more lecherous options), and sometimes you have to play two or three cards to fill in the blanks of the statements on the black cards. Like this winning combination. I apologize in advance...

This game made every single one of us blush. Multiple times. It even appalled Mr. Musky more than once. It is so twisted and wrong it's unbelievable. 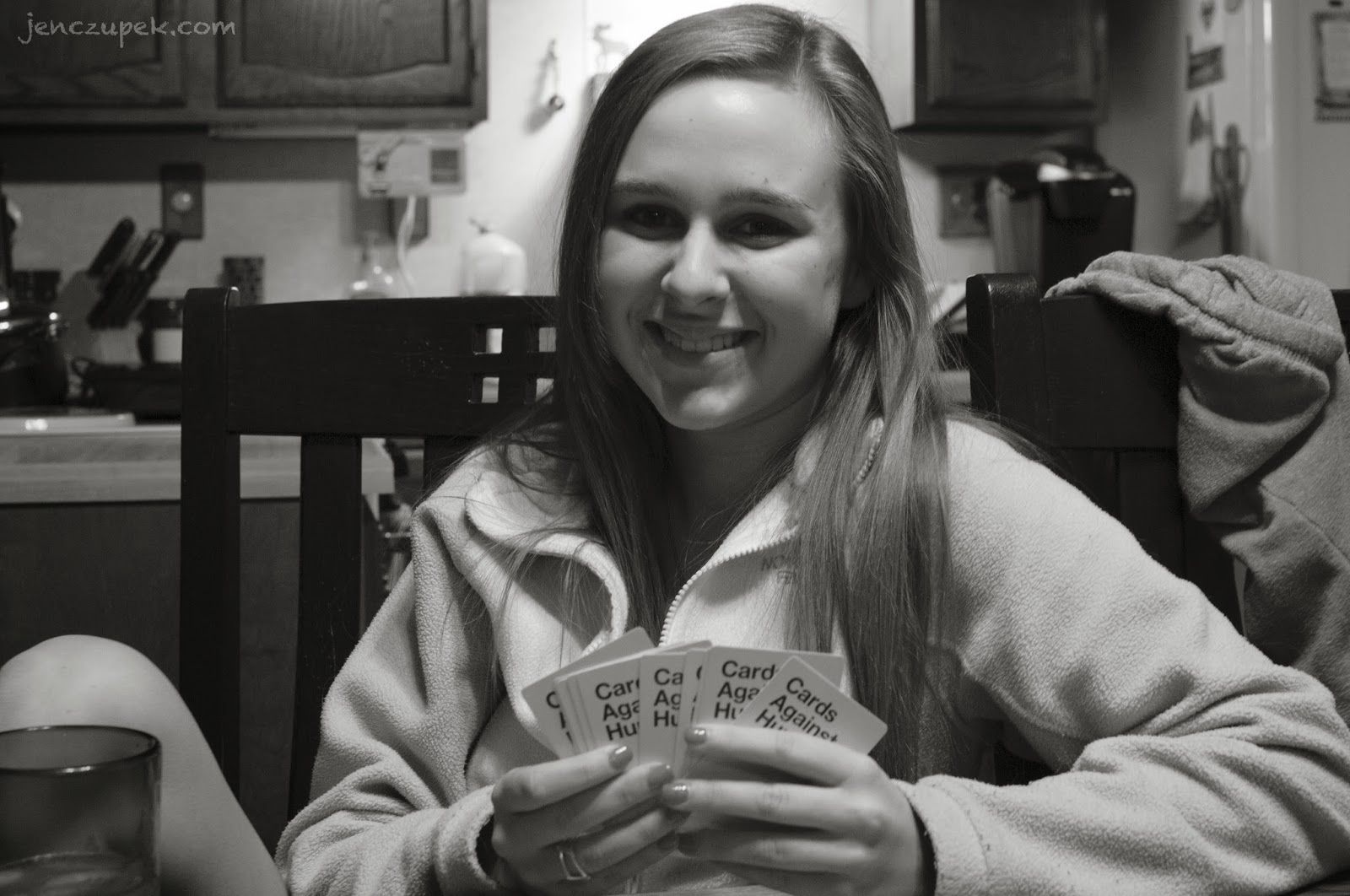 Just like the proverbial train wreck though, we couldn't stop ourselves. We played through the entire deck of black cards the first time we cracked it open, just to see how awful it could get. My examples on this post are tame. Imagine if the movie Superbad were broken down to a few nasty statements, and you're on the right track. I can't even begin to tell you some of the words on the cards. Let's just say that they are vile, awful, horrible things. So bad that I'd never speak them aloud, other than when playing the game. They truly are that bad.

Sometimes, I guess it's fun to be bad? I don't know. All's I know is that after a couple of cocktails, this game is hilarious. Hilariously naughty. And nobody gets hurt. Except for maybe George Bush, Rush Limbaugh and our current President's feelings.

Now I know the box says for ages 17+. And neither of my children are seventeen (one is close). However, we adopted a very open line of communication with our kids early on in our parenting adventure. Why, several years ago in that very cabin you see in the pictures above, my then nine-year-old daughter asked exactly how does a baby get in the Mommy's tummy?

"I mean, I know there's fertilization between an egg and sperm," she thoughtfully considered. "But exactly how does the sperm get there?"

Mr. Musky promptly went to the garage to organize fishing gear. How convenient. I told Jake to stay put...that he might as well listen to my watered down version as well. Once I got past love and marriage and certain necessities that physiologically happen in order to reproduce, my seven-year-old interrupted me and took over. He patiently explained to his big sister the workings of fertilization of a sperm and egg and how exactly the resulting child grows in the uterus of a fertile woman.

You can imagine my surprise. "How did you learn that?"

"Brain Pop. When I broke my arm, I had to go to the Media Center instead of going outside for recess. I did a bunch of Brain Pops on the computer, and once I chose to learn about the human reproductive cycle."

"Huh," I replied. Silently reconsidering homeschooling, I decided to not make a big deal about it, but found it interesting that my tax dollars led to an unsupervised environment where my son learned something he wasn't supposed to officially learn about in our public school system until the ripe old age of eleven.

He just informed me that now, as an eighth grader, sex ed begins in the next few weeks. Then he corrected himself. 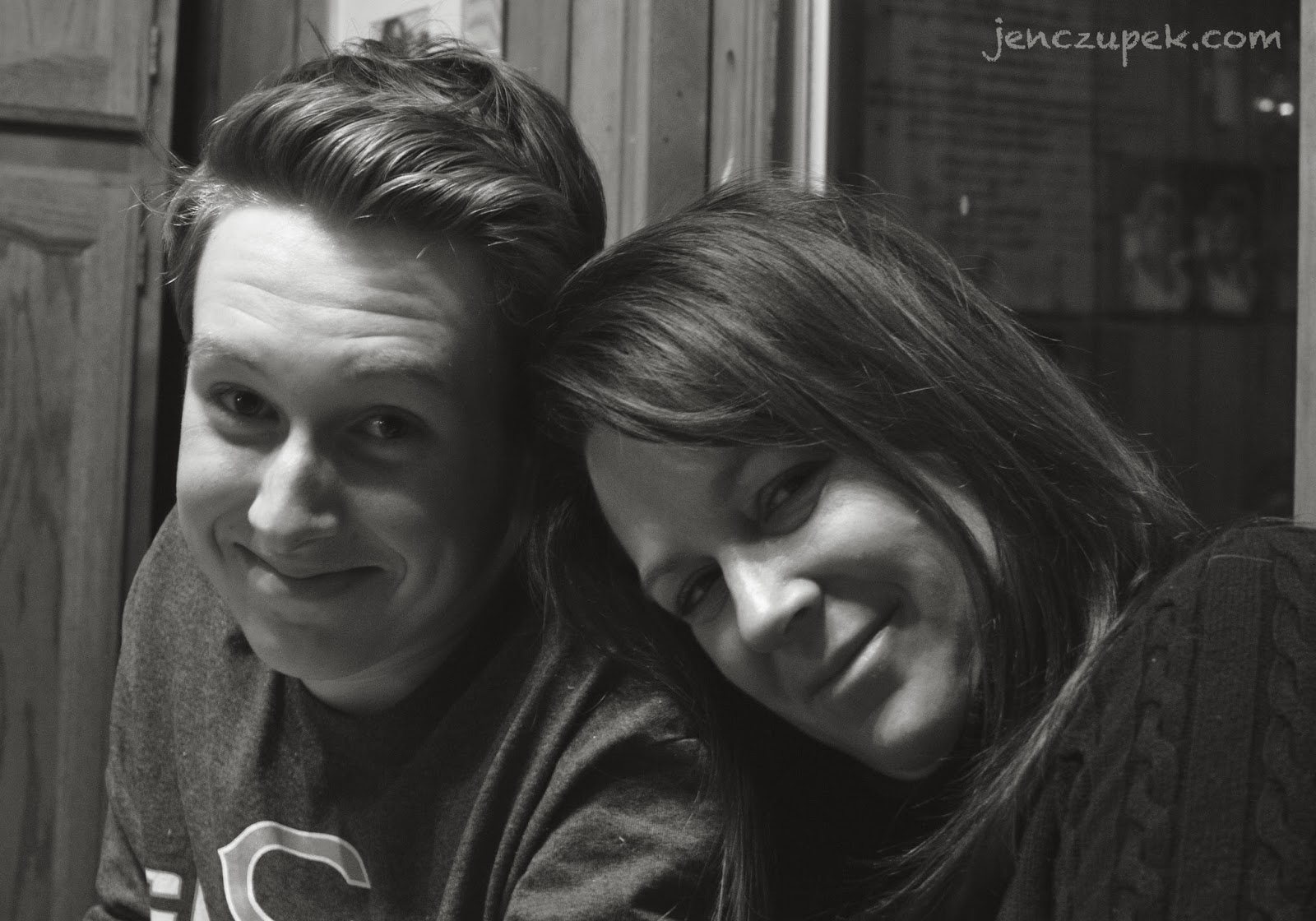 "It actually just continues. I had a good dose of sex ed when we played Cards Against Humanity." 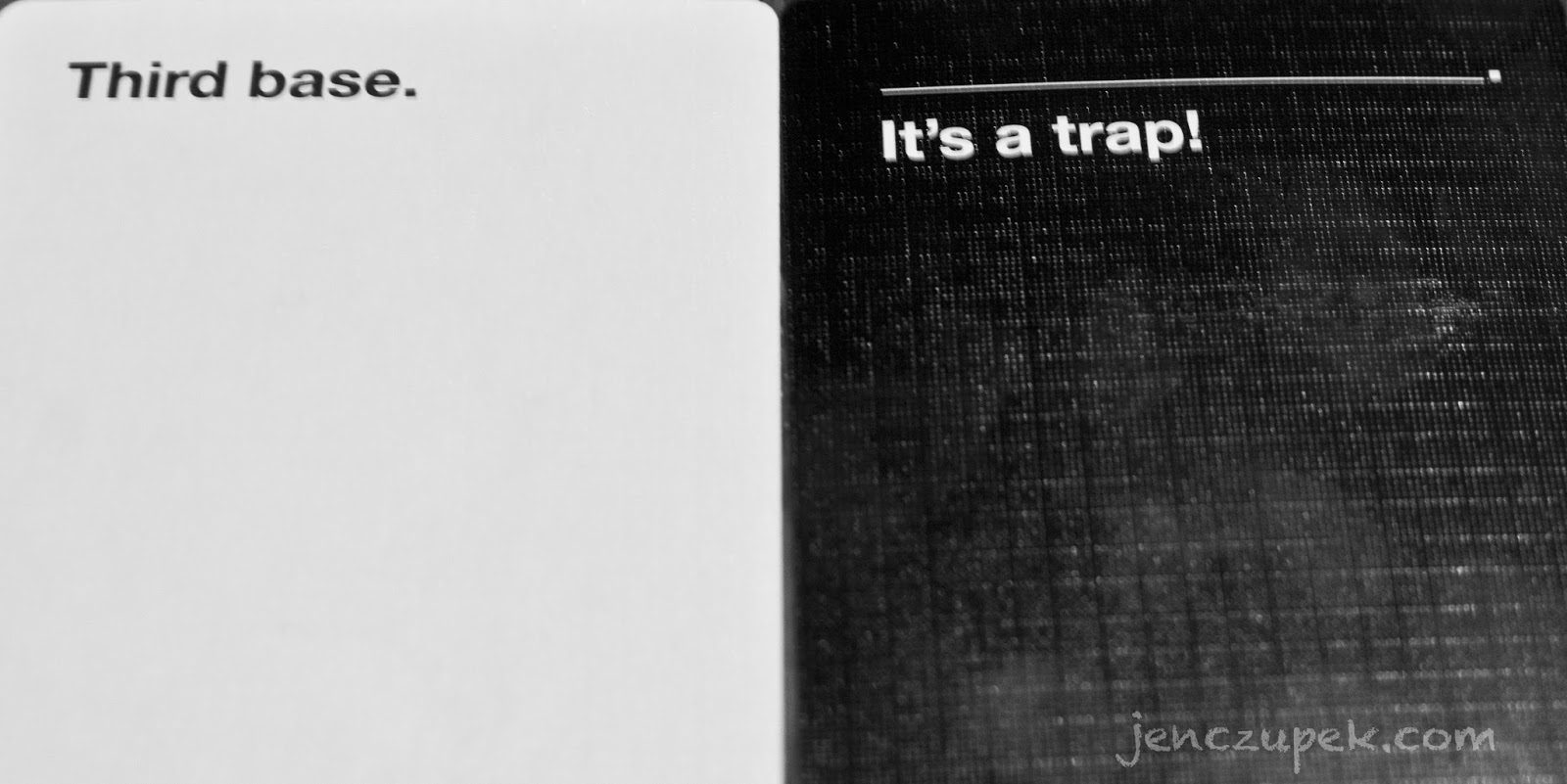 Ugh. To say it's slightly awkward to explain sexual deviance to your hormonal, teenaged children is the understatement of the New Year. But you know what? It reinforced that they really can come to us with any awkward, inappropriate questions they will ever have on the topic, and we will answer them honestly. If you find that you have a hard time with this topic in your house, then maybe this is the game for you to break the ice with your kids. 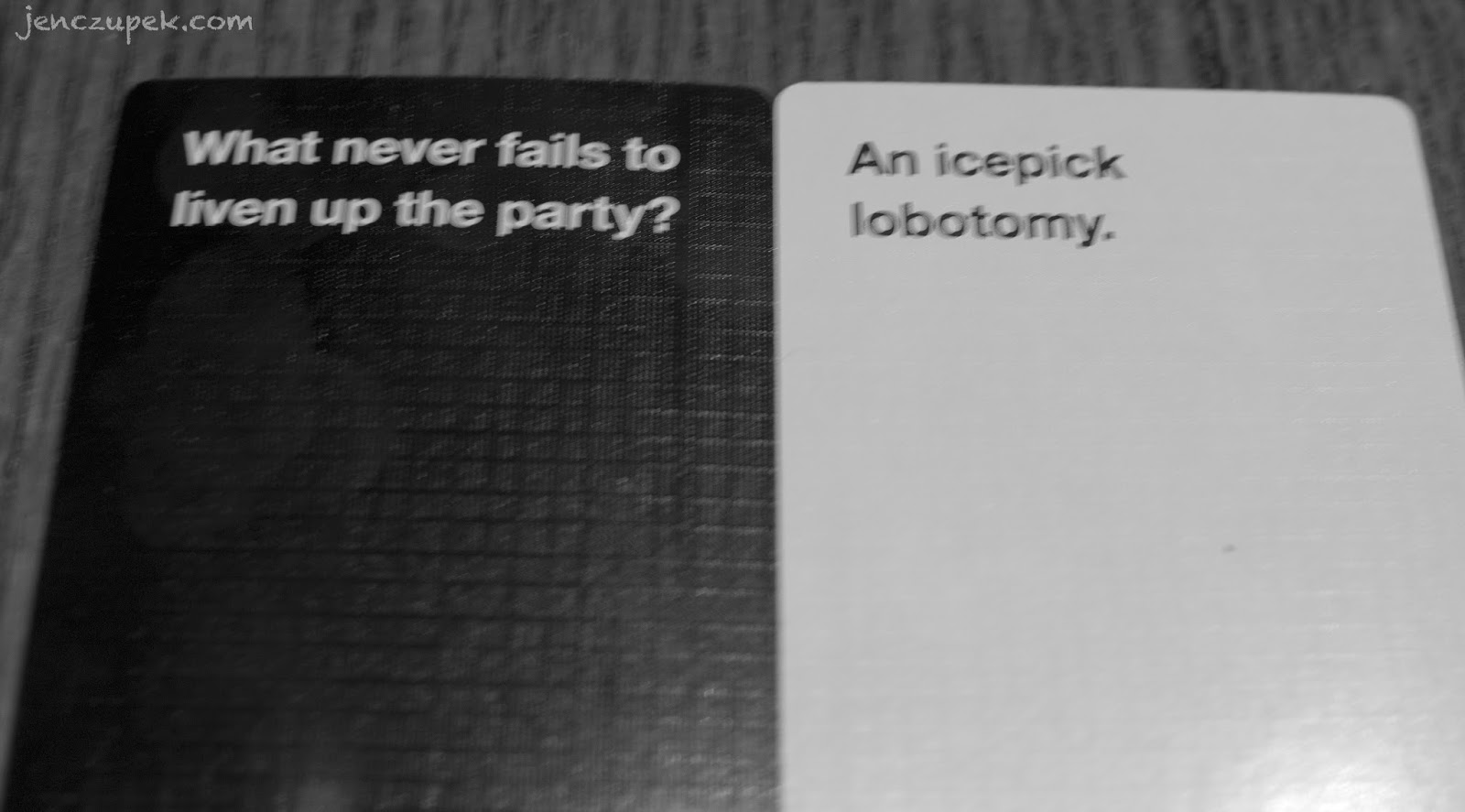 I'M JUST KIDDING! Don't take that suggestion seriously! You'll be after me with an icepick lobotomy if you adopt my sarcastic advice.

Sometimes the card combinations were so bad that it was difficult for us to read them aloud without blushing and shaking our heads at the ludicrous combinations. We even had to revert to the Urban Dictionary to determine the meaning of some of the more exotic topics. I'm slightly disturbed that Mr. Musky knew the meaning of every single deviant card.

There's no way this game was coming home where sneaky teenagers might play with their friends. I enjoy my life, thank you very much, and I don't need DCFS coming after me to throw me in the clink. There are definitely some people we would never play this game with (Hi Mom!) and I don't recommend playing it with ANYONE who is easily offended, cannot appreciate a thoughtful dollop of sarcasm, or can't tap into a dark side of humor. It is NOT suitable for most children under the age of 17. I can see where the more people play, the more crazy and fun it would be. It's quick - I don't recommend playing for more than about 30-45 minutes. And it's not one I would play all the time because the novelty would wear off.

But I do see the expansion pack winding up under our tree next December. That Santa knows us well.