Full Circle, Thanks to Plainfield School of Rock

In the very angst-filled days called Jr. High School, I found a daily refuge from bullies and snot-nosed, vicious brats in the form of choir. For an hour every afternoon, I entered Mrs. Holcomb's safe haven and sang in harmony, grateful for the reprieve from the farm town version of Mean Girls. I ultimately tried out for show choir as an incoming freshman in High School. I surprised myself and made the elite group as an underclassman, thanks to a great dancing partner who eased my nerves and made me smile and enjoy myself during the tryout.

Show choir was hands down, unequivocally the best extra-curricular activity I ever participated in, and it was on a short list of things I was sad to abandon when we moved away. The feeling of squelching your nerves to perform on stage with all eyes on you, personally connecting with an audience member who returns a smile and forgets their own worries for a moment is a rush like none other. Better than any apéritif, and I'm sure better than any drug. Although...that stuff they jacked me up with after my firstborn's c-section was pretty sweet. I'll call that a close second.

Hearing the audience applaud your performance electrifies your entire being. I'm talking goose bump central, man. The adrenaline rush is better than winning any sporting event. Music and dance can reach people and lift their spirits like nothing else in the world, in my not-so-humble opinion.

So when my son said he wanted to play guitar, I quickly relented, and bought him an electric guitar.
He started lessons a few months later, and it went just so-so. Then the School of Rock opened their doors in our little town.

Jake switched instructors and began his real musical endeavor in September. At first, he said that he only wanted to take lessons - he wanted no part of the performance group and certainly didn't want play on stage in front of a crowd. I talked to the owner behind Jake's back and asked him to talk him into it. Because sometimes, Mamas just know better, but their kids need to hear it elsewhere.

So he agreed. And simply because of our hectic schedule, he became one of the guitarists for Team GreenDay. Every Wednesday he played with other kids, preparing for a live show. During the fall I purposefully did not sit in the lobby during the practices, as I wanted to be surprised on performance night. Along the way, in his usual easy-going manner, he said it was good. Or it was cool. Or he liked it fine. 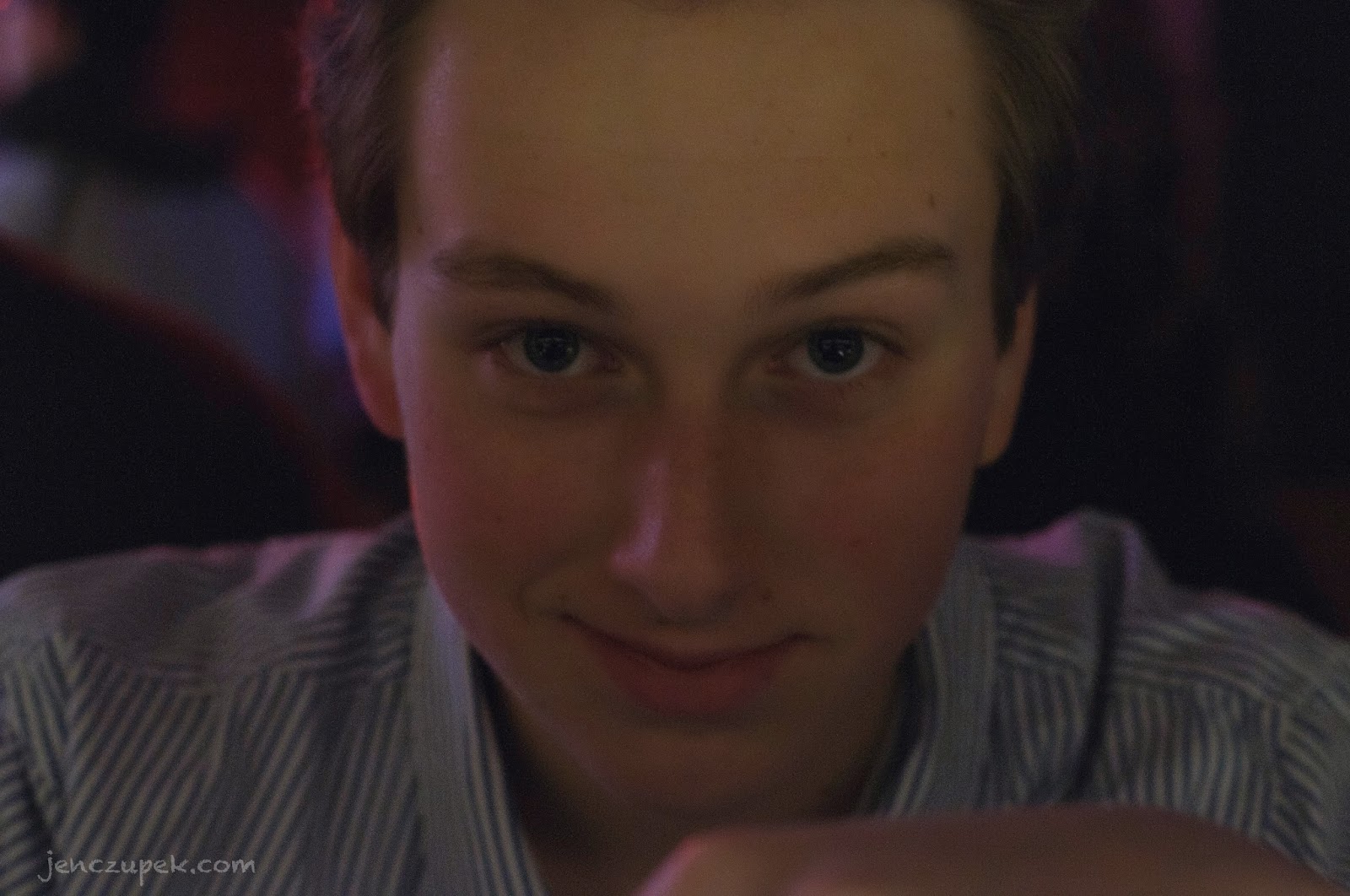 Sheesh. I wonder where the lack of enthusiasm comes from? Clearly not my genes.

One night after practice, he casually mentioned that he was assigned a solo in a couple of the songs.

"Really?" I questioned cautiously. I didn't realize he was good enough to play a guitar solo.

Fast forward to January 10th. Show time. There were two sets - ACDC and GreenDay, and they played at a local venue in Joliet that hosts live music nightly. We walked into a real bar, complete with an elevated stage, balcony viewing areas, the works. Mr. Musky was impressed at the scale of the venue, despite sticking to the floor like we were drinking Pabst out of a bucket at KAMS.

We arrived about an hour early, only to realize we'd be in the standing room only contingent. The place was packed. I'm guessing there were over 200 people present to cheer on the kids. Jake was beside himself with nerves. I sent him a couple of reassuring texts, knowing exactly what that anxiety feels like...the roiling in the gut threatening to bubble to the surface.

When it came time for Jake's first song, we moved forward a bit in the crowd. I took one look at my poor kid, and commented to my husband, "He looks like he's going to hurl!" I knew he was nervous, because the first song he performed would be his guitar solo. The lead singer kicked them off, and they sounded AWESOME! 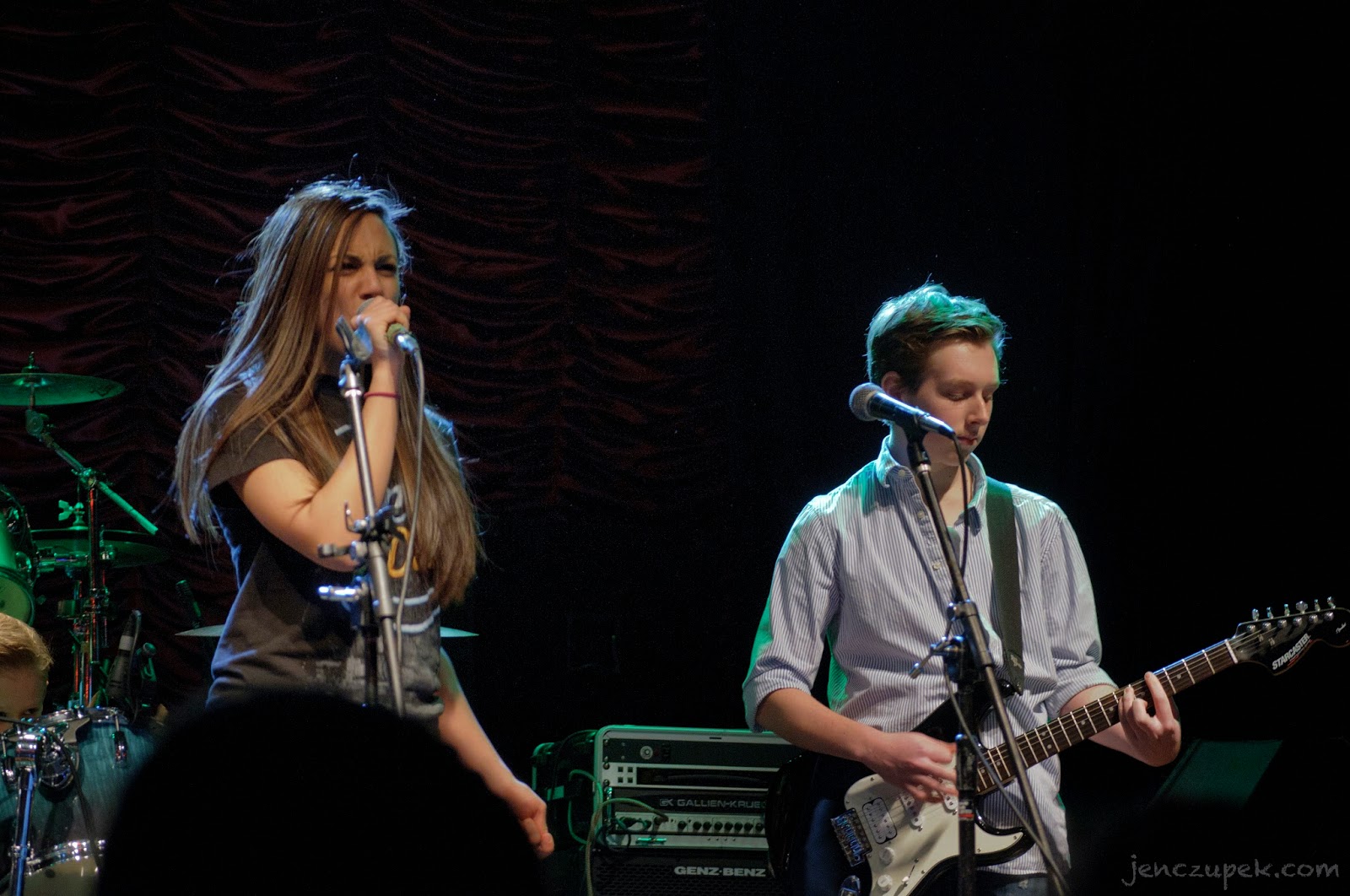 Jake didn't play immediately, but when he did? 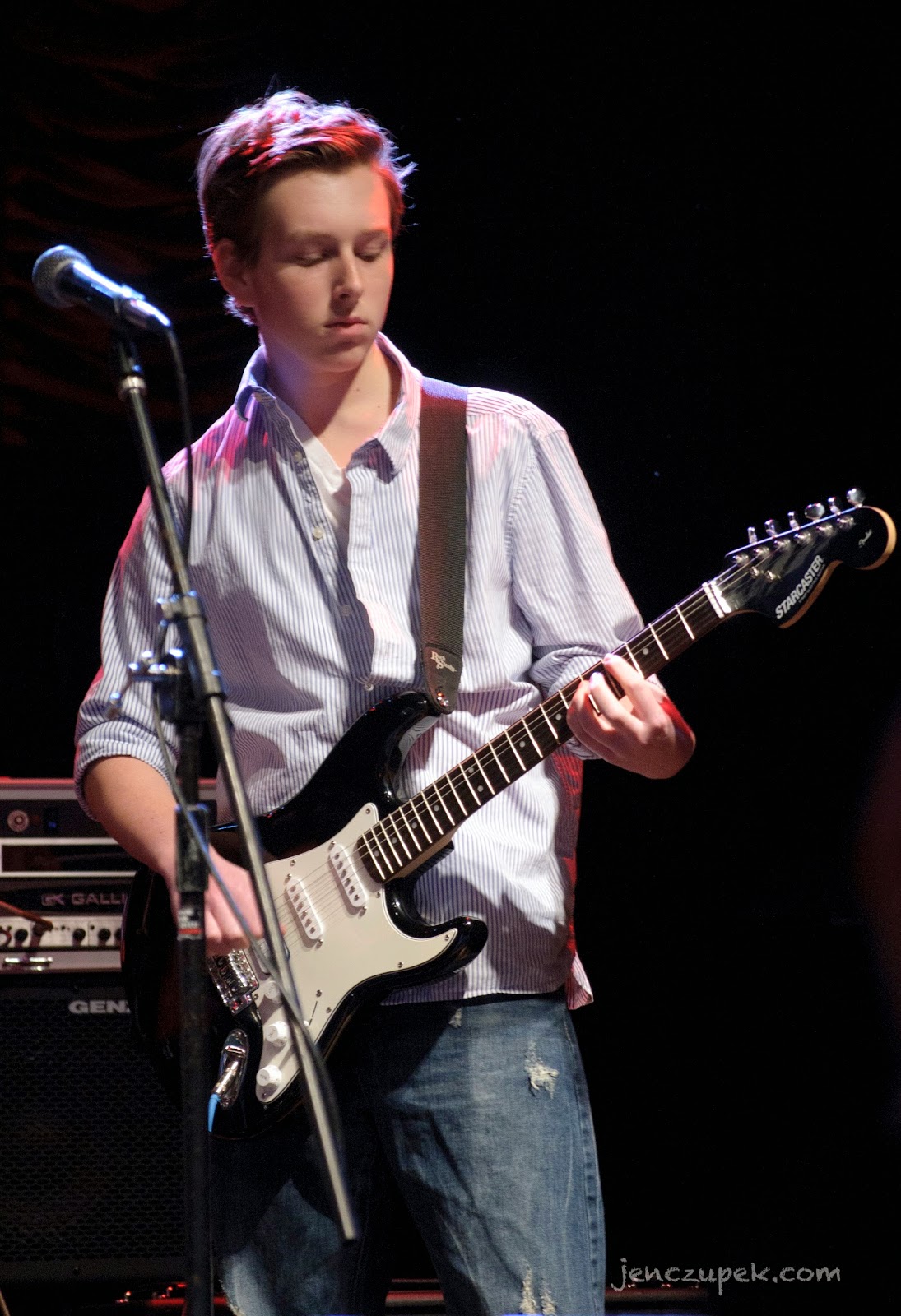 Crocodile tears. I could not control myself. I know how terrifying and gratifying it is to perform musically on a stage, and I knew. I KNEW! Right there, at that moment, the bug bit a giant hole in his soul, and he became addicted. I felt thrilled and nostalgic and marveled at how full circle it all seemed. I turned around and looked at Mr. Musky who also had misty eyes (although he denies this - but I saw them!). "He's doing it! He's awesome!" I shouted. I simply could not control myself and bawled through the whole song. I was proud of him for overcoming his fear and executing wonderfully. I screamed a "Woo Hoo!" after his solo, and caught the glimpse of a smile on the corners of his lips. He knew Mama was out there, cheering him on. 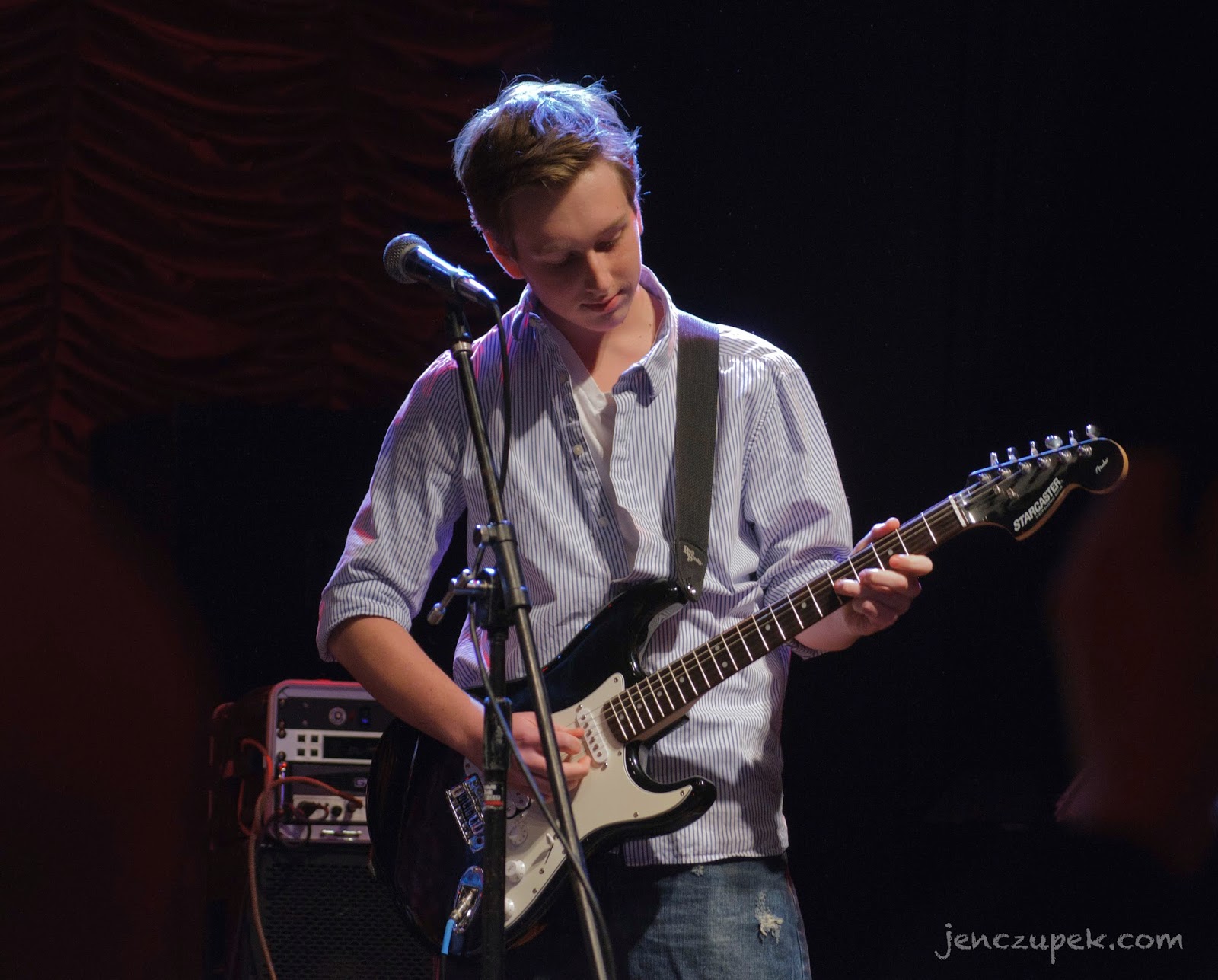 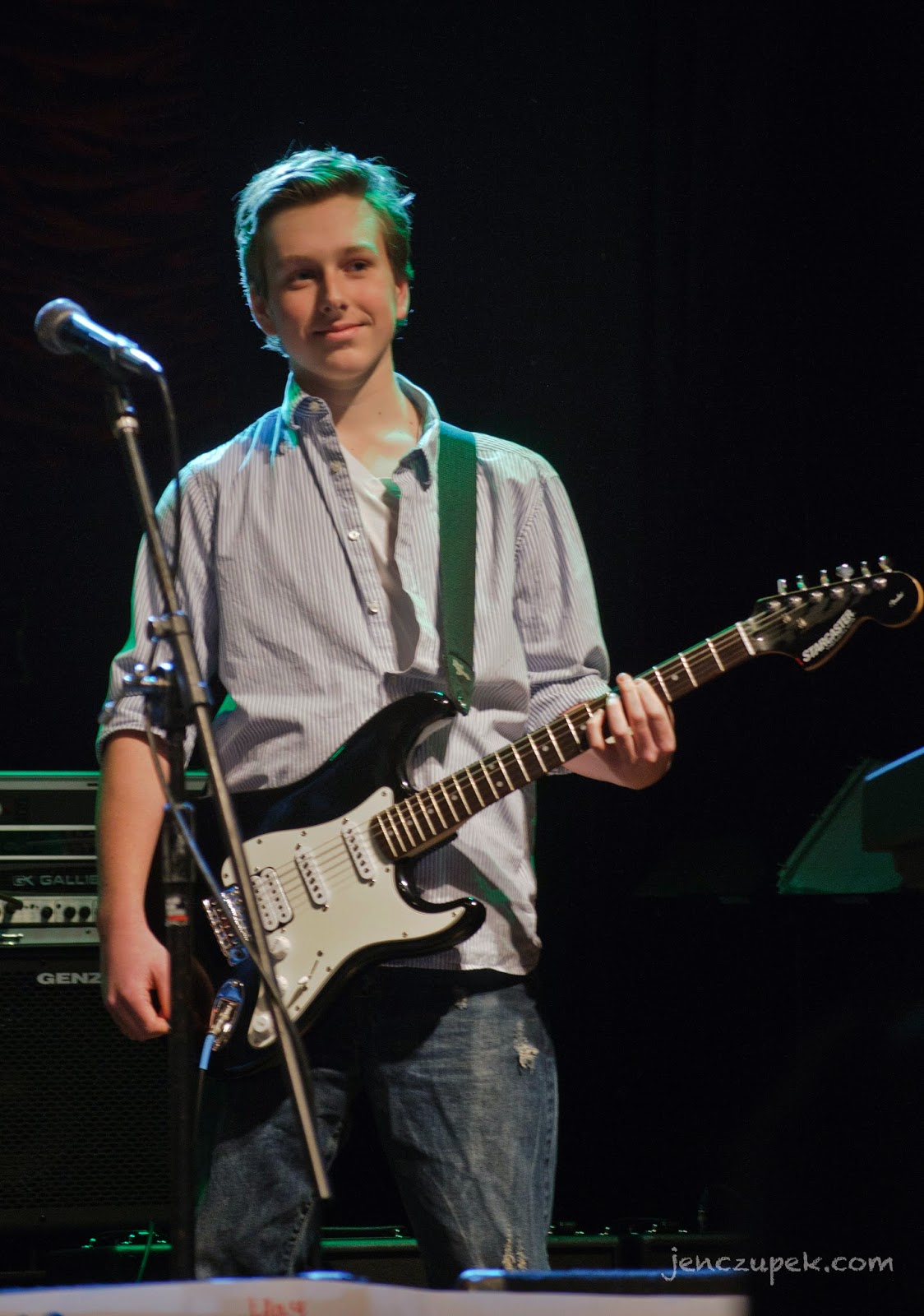 The rest of the night flew by and the band performed so well - their musicality after just four short months together exceeded everyone's expectations. After shaking the jitters, the kids were all more relaxed and did even better on Sunday night, catching the bug even more feverishly. 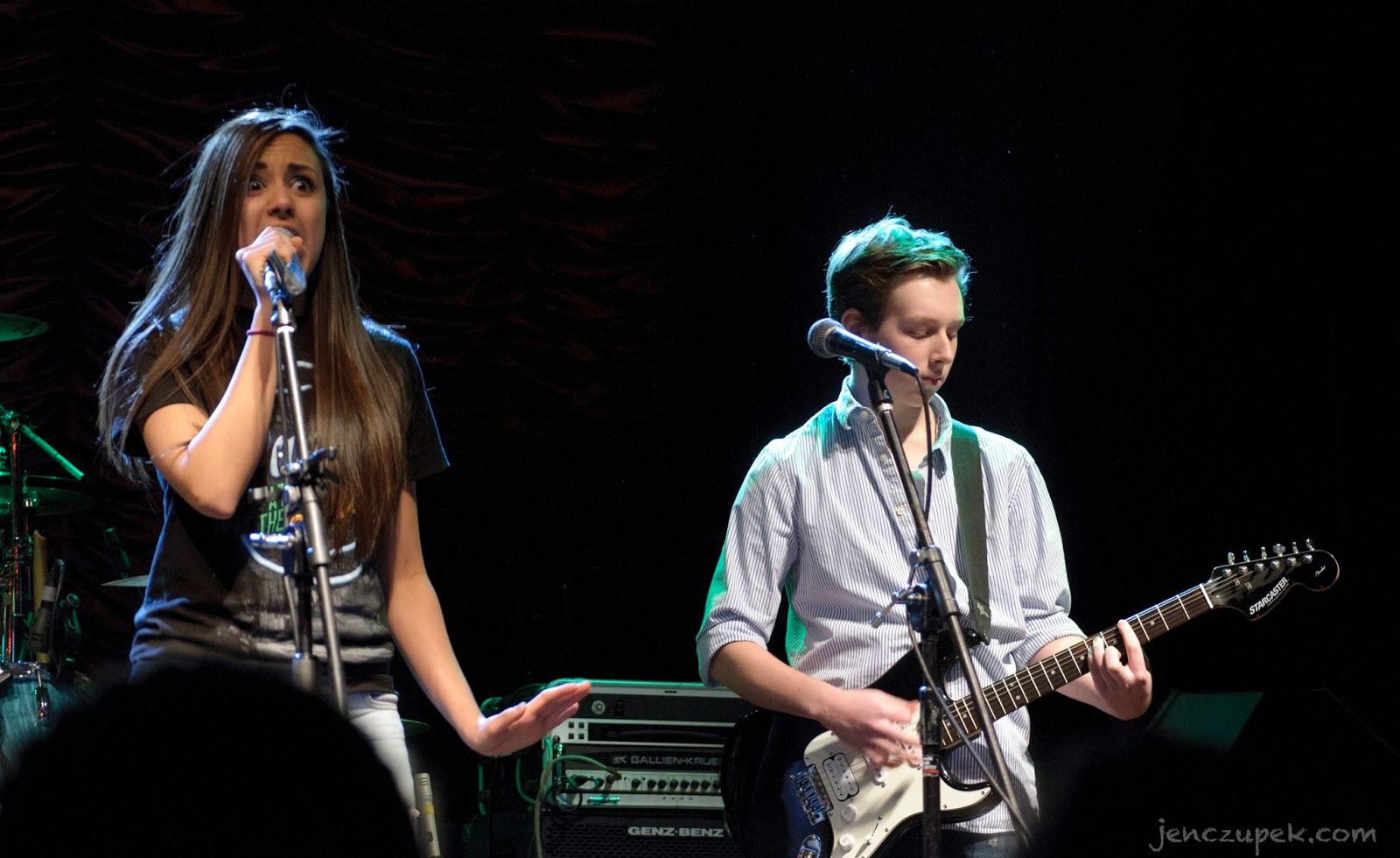 The week before the big show, Jake said that moving forward he just wanted to continue with private lessons because the group performance practices were getting to be a bit much. By Saturday night? Before we even walked out of the venue, he declared, "I'm in." So next up he'll be playing No Doubt and FooFighters. I can't wait for the June shows.

The only thing we are arguing about now is whether or not he should sing backup on a few songs. Because you know what they say...when a man picks up a guitar and begins to play, he instantly becomes 10,000,000 times cuter. 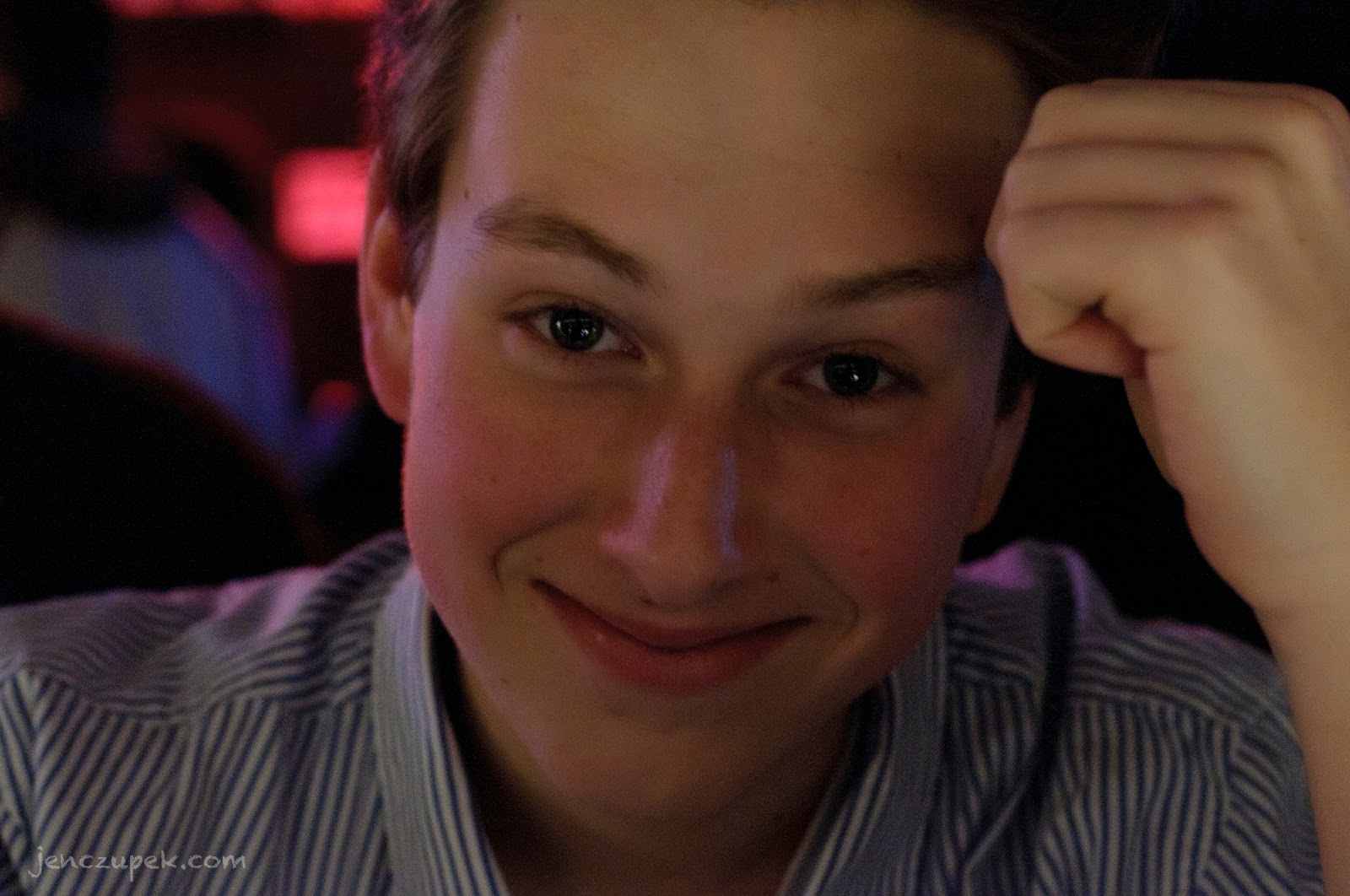 As if that's even remotely possible with this one. But if he sings AND plays that guitar? 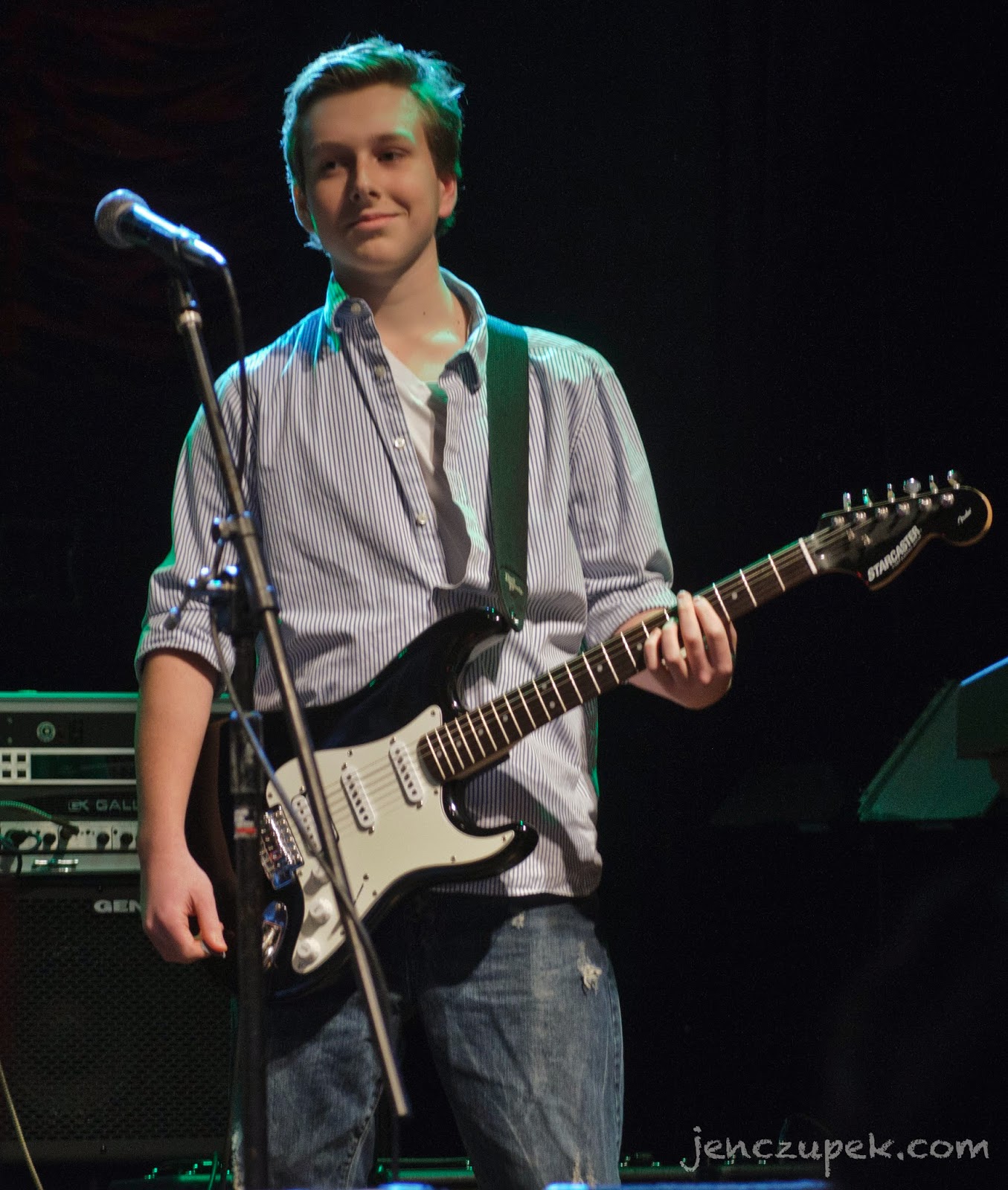 He instantly becomes the hottest man on the face of the earth. Go forth and sing, my son! You can do it!