A Glossary of Teenager Vernacular

Social Media rocks. Because of it, I stay in closer contact with friends from all walks of life - childhood, first high school, second high school, college, corporate America. I love stalking some of the kids' former summer camp counselors, watching as they blossom in their careers and become engaged to be married as their lives play out in far away countries. Or Mr. Musky's cousin as she travels from southeast Missouri to Alaska by car in February. FEBRUARY, the silly goose. Or his other cousin who wanders aimlessly in Southeast Asia...hi Adam! Check out his blog. He's a phenomenal landscape photographer.

Sometimes, I'll throw a line out and reel someone in completely, like an unsuspecting first timer at next week's girls weekend. Or my roommate from freshman year at University of Illinois, a lovely farm girl from middle America whose name I was privileged to see as the lottery winner to spend a most formidable year with me at the ripe old age of eighteen.

Sarah and I hit it off immediately. We were enough alike to live together effortlessly, for the most part. If anything, I probably bugged her most with my messy piles and constantly visiting boyfriend, but she never complained or bothered me once. Not ever. How did I get so lucky? Although we took separate paths in the sea of 30,000 undergraduates after that first year, Mr. Musky and I did attend her wedding after college and we managed to marginally keep in touch after that. We both became pregnant around the same time, and got together to lay our baby girls on the floor side-by-side when they were just weeks old. After that, life took over and our updates were reduced to Christmas cards and the occasional visit every seven years or so.

We recently reconnected for lunch. Have you ever tried to squeeze in ten years of updates in 1.5 hours? We talked non stop. The waitress interrupted us at least eight times before we even looked at our menus to order. We blathered on about everything, but naturally settled in on the kids, focusing on our eldest offspring, because as we realized, the two are very alike in many ways. We talked about their dallying in relationships, which for the record is highly entertaining to see play out. I feel like I have a front row seat at the dramatic coming-of-age production called My Daughter's Life, and if you're willing to simply watch and gently guide while biting a crater in your lower lip, it's the best form of entertainment out there.

As we were chatting, I mentioned that my daughter is "talking" to a boy.

"Oh - you guys use that word too in Yorkville?"

So I launched into a five minute explanation of what exactly it means for two teenagers to be "talking" to one another. Seems to be fairly self explanatory, doesn't it? Oh no. No, no, no my young padwans. For those of you with up-and-coming teenagers, consider this a Jedi Master public service announcement today. I join you in your effort to translate their language, and given that I have some willing participants to educate this poor old mom, I aim to share my knowledge so you too can effectively communicate with your apprentices. Also known as the monkeys who take over your pantry, leaving nothing but a trail of crumbs along your unwashed floor.

Let's start with "talking." We're riding in the car, Kahley and me, and I ask her how Elizabeth* is doing.

"Oh. Cool. You mean right now on the phone?"

"Oh - right. You mean they are texting now."

"Well, maybe. I don't know. But they're definitely talking."

"Are they getting together after school today?"

"I doubt it. But they might hang out on the weekend."

"Well then how do you know they're talking?" My frustration level rises.

"Because Elizabeth told me they are! It's kind of a big deal, Mom. She's had a thing for him like, forever."

"Don't say like." I loathe that word when used incorrectly, a mere 10,000,000 times per day by every teenaged girl on the face of the earth. I bust my kids' butts every time they use it out of context.

"You know what I mean. They kinda like each other, so they're talking."

"So you mean they're going out."

Giant sigh of exasperation, bordering on exaggeration. "Moham. No. They are not going out. They are talking. You know...they are getting to know one another."

"So is this an exclusive thing? Are they exclusively talking? Can they "talk" to other people?"

"Well sure they can talk to other people, but they're not "Talking" to anyone else. Now do you get it?"

* The names are altered to protect the innocent. And my daughter's reputation. And the reputations of Elizabeth and Harry, especially if their parents don't know they are talking.

I can assure you, friends, that I most definitely did not get it. But I think I do now. The deal with talking teenagers is this: Girl meets boy, girl decides she likes boy...enough to pursue a toe-dip into the relationship pool. They talk, 98% via text, the other 2% very awkwardly at school. Never ever on the phone. This is considered a "getting to know you" phase, but definitely not a dating phase, as teenagers younger than 16 don't car date yet, at least in my house. It may, however, involve a date in the sense of "Hanging Out," which is one of Mr. Musky's favorite terms these days.

"Whaddya mean? You gonna go to his house and hang from a bar like an ape or somethin'?"

The result: sheer aggravation, a huff, and an eye roll to the heavens as she turns on her heel and demands an answer. Can she can hang out with the guy she's talking with or not this weekend?

Oh - and this: Talking may definitely involve kissing. "Because you see Mom, you wanna try the milk before you buy it."

Now listen. My daughter doesn't drink milk. Nor does she buy it. But I can deduce from this that she's definitely kissed a boy. Or several. Which I'm totally fine with. Kiss away and try that milk, young Anakin.

Over the past several years, there are other words I've heard that caused me to pause and demand an explanation. Here's your Glossary of Teenager Vernacular, as translated by the children with whom I co-habitate. Some border on the verge of vulgarity, but we're pretty open and honest around here. I'd rather know than not. Also realize that we live in a rather diverse community, so some of these may not apply to high schools similar to the ones where I grew up - 99.999% Caucasian and farmers or hunters.

Talking - Verb. When two people of the opposite sex are interested in one another and talk via text to determine if they should enter a full blown, exclusive relationship. Exclusivity may be established when talking to an individual (e.g. we are not talking with anyone else) but is not required. Kissing is allowed. But the two are definitely not "going out" (code for the older generation: going steady) or dating.
Hang Out - when two or more teenagers gather together at someone's house to spend time together on a Friday or Saturday night. Not hanging from a bar, as Mr. Musky thinks every time he hears this phrase.
Ratchet - adjective to describe a ratty, trashy, less than desirable girl. If you're willing to foray into the urban dictionary, here's a more descriptive definition.
Homie Hopper - a girl who dates a group of guys who are all friends, one after another.
Gettin' it in - phrase to describe...It. Pretty self explanatory.
Wife her up - Seems to me a bit early for kiddies (yes! because that's what they are!) to be looking for good spouse material, but at least the thought exists? Eeewwww.
#MCM - Many of you probably already know this, but since I'm always a bit late to the party, I just found out last week. Man Crush Monday. As in, girls post pics of their man crushes on Mondays. Kinda like TBT, or Throw Back Thursday, when people post pictures of themselves from eons ago. For teenagers, they post pictures from last week.
Thirsty - (one of my personal favorites) - A word to describe a state in which an individual seeks the affection of another. In a word, horny. But it sounds so much better than the original.

I love messing with my kids, and after learning the meaning of Thirsty, I brought crimson to my daughter's cheeks one night. She was watching TV with a girlfriend, and we were having an Olympic Opening Ceremony party in the basement with some friends. Jimmy, from across the street, brought a present and we all imbibed. 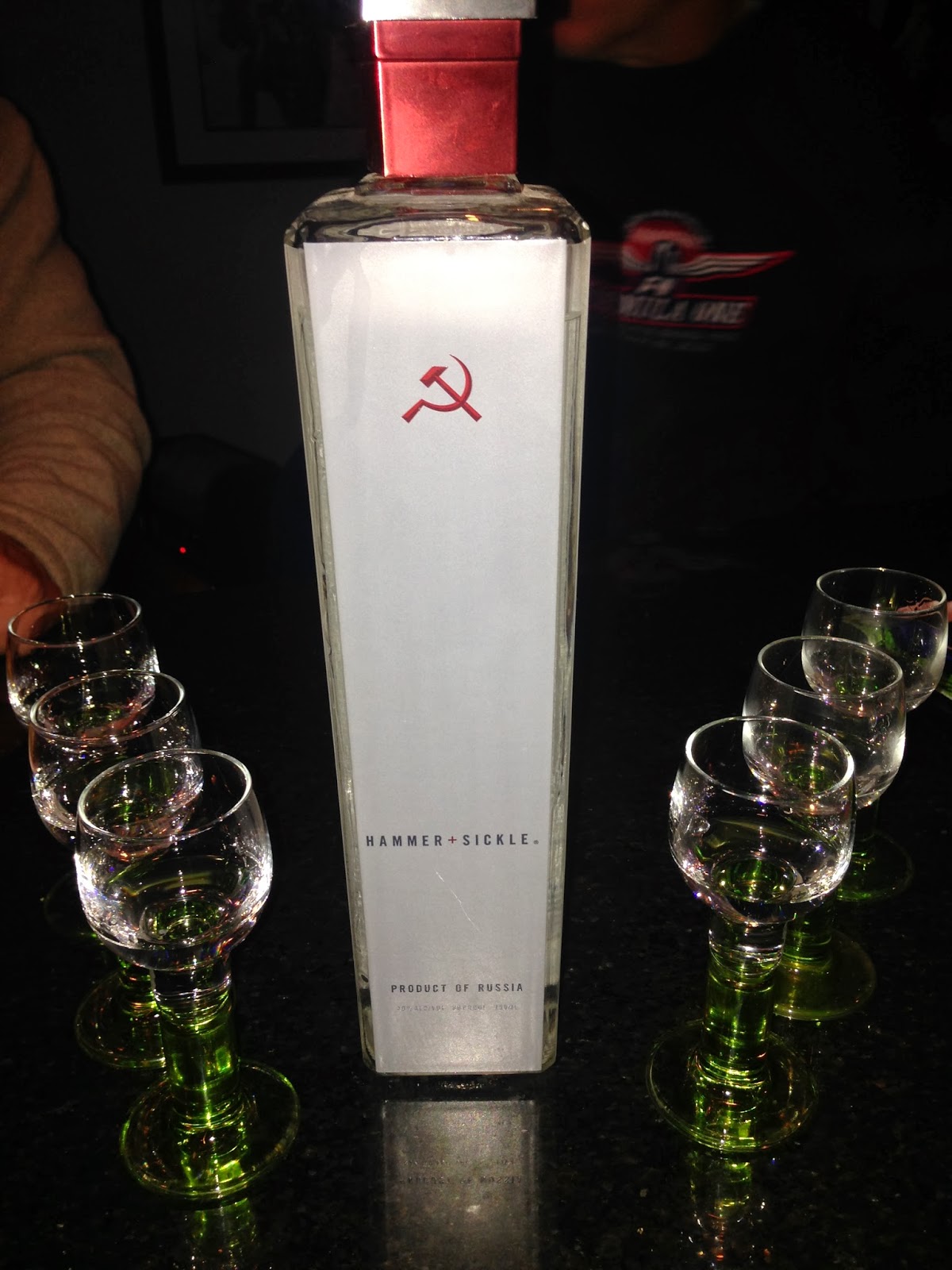 Yum....Soviet Union, er, I mean, Russian Vodka. Hammer and Sickle. What I expected to be harsher than a jagged knife based on principle alone ended up being smooth, cool and tasty all the way down. And I normally hate shots! Anyway...during a brief intermission I ran upstairs to get something out of the kitchen, and Kahley asked me how it was going.

"Awesome!" I answered. Eyeballing her friend, who I happen to know pretty well and enjoy messing with as well, I continued. "I mean, I'm getting THIRS-TY!" And with a wink and a thrust of my well-endowed hip, I trounced off back to the basement, to squeals from the girls, her friend in disbelief? More like horror. "Your mom DID NOT JUST SAY THAT!"

See...gaining this knowledge can backfire on the children, leaving them disgusted and wanting us to crawl under a shell like a hermit crab.

Another good one - on Valentine's Day, Mr. Musky gave me a bottle of body lotion that has the word pheromone on it. I think he bought me that brand simply to say the following in front of the unsuspecting kids: "Mmmmm. Mom's pheromones make me thirsty!" Grodded out, they both promptly left the room, their gag refluxes hard at work.

I'm curious. Do any of you have teenager sayings that I've missed? I'd love to hear them!