Wow. A year ago, I hit the publish button on my first Apéritif Friday post. I've had a blast sharing a window into our Friday nights with you all, and am grateful for the feedback and support. So on this anniversary, I'm throwin' it back to the first recipe I ever posted - Stuffed Pork Tenderloin and Roasted Cauliflower. This time however, I paleofied it. The first iteration, while phenomenal and worth the effort, included what I'd consider now to be a bit of a grody ingredient. Pizza Hut Breadsticks. There is no way my intestinal tract would cooperate now if I even tried that number on it. So instead, I used the following ingredients for the stuffing: 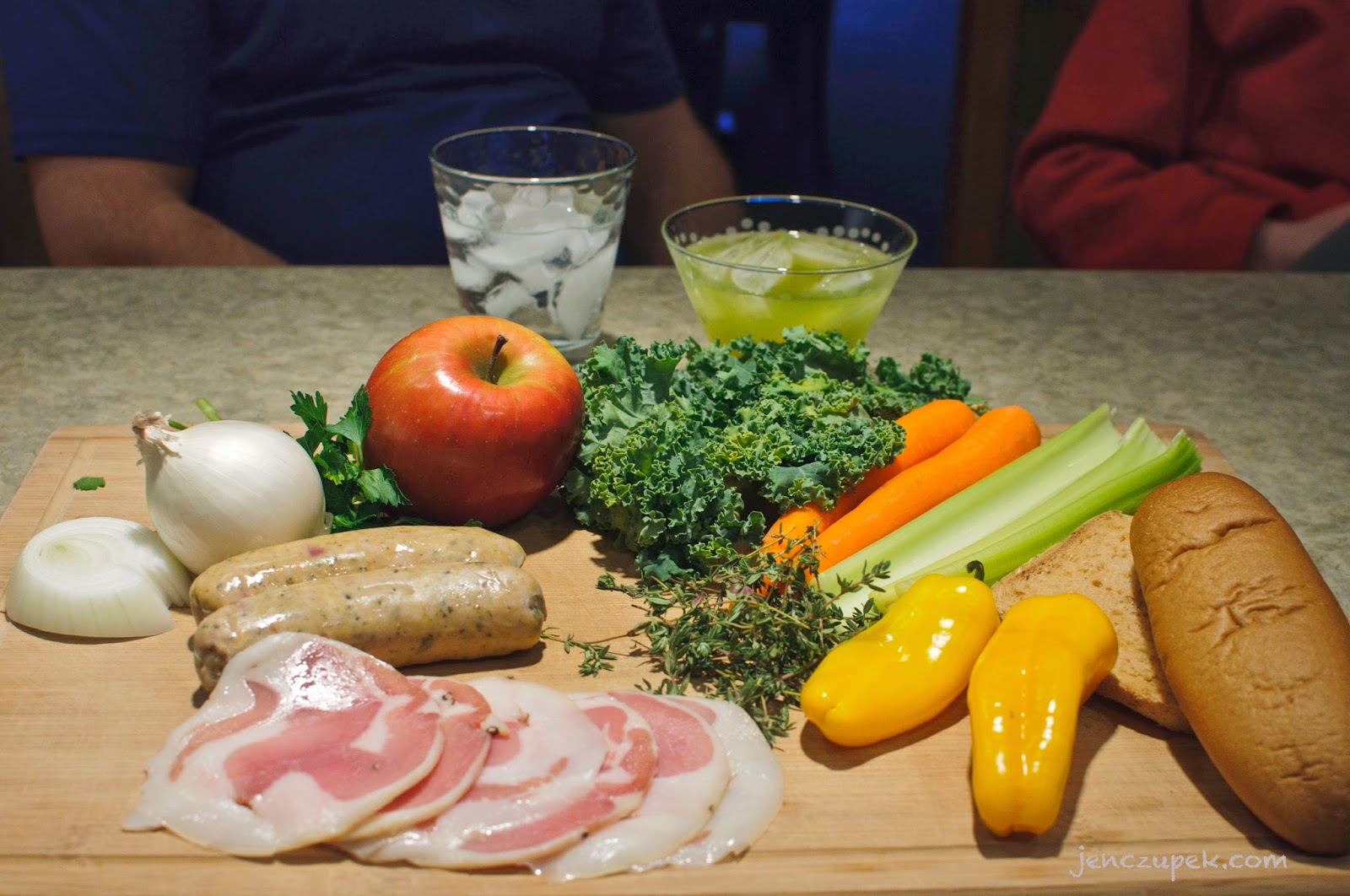 Two baby yellow peppers, diced
Half an onion, diced
Two celery stalks, diced
Two carrots, diced
An apple, diced
Two chicken sausages, sugar, nitrite and nitrate free (only natural ingredients)
A couple of stalks of curly kale (nom nom nom - gotta eat this at least every other day), chopped
Fresh thyme
Couple of sprigs of parsley
A couple of cloves of garlic, microplaned or chopped (not pictured, oops)
A stale piece of gluten free bread and a GF hot dog bun (just 'cause I had it in the fridge), cubed
A delicious cocktail (pictured in the back) to sip - this one takes a bit of time 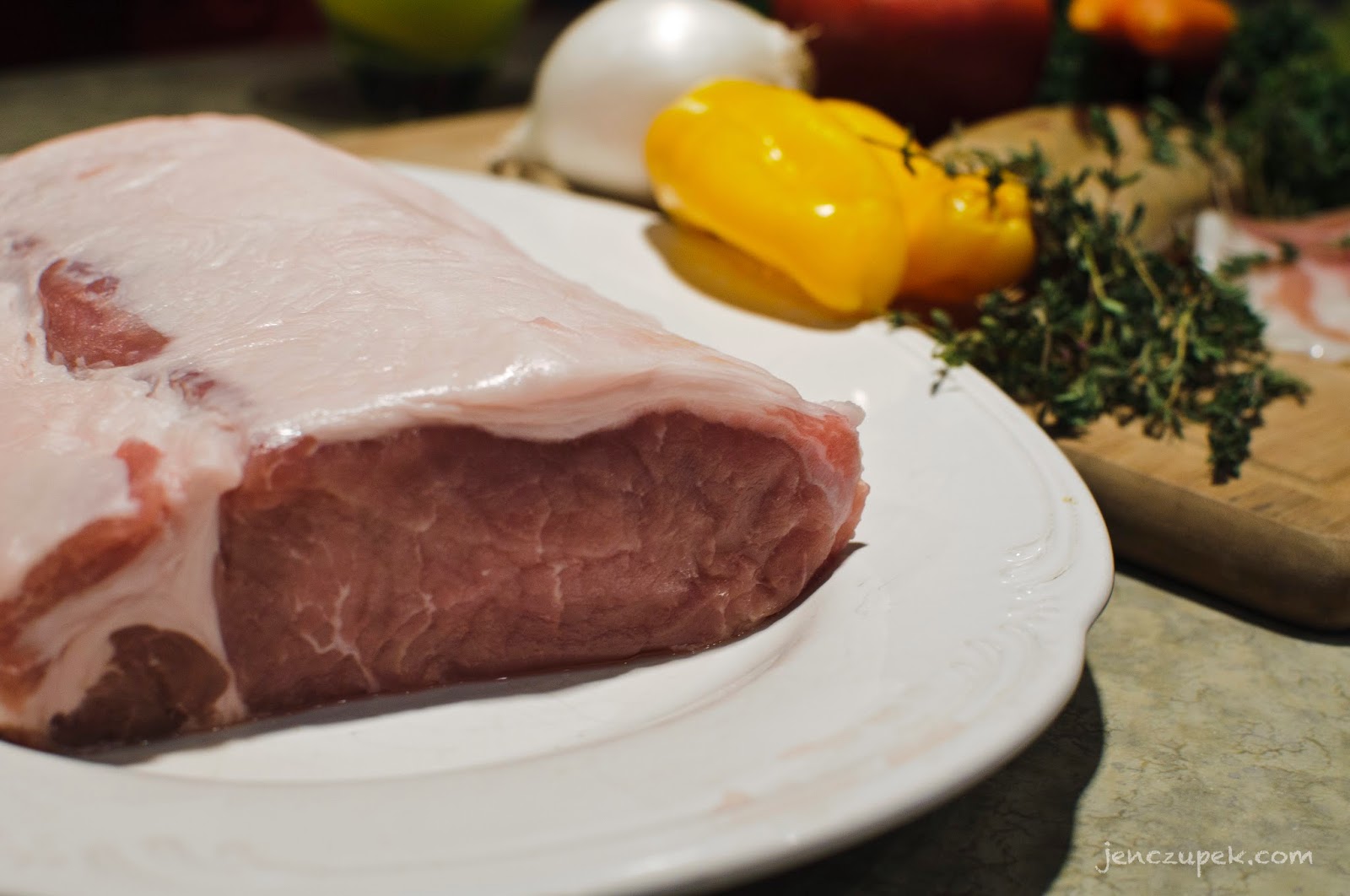 OH! And of course, a Pork Tenderloin. This is actually a Pork Loin Roast from the 1/2 pig we bought. But I recommend Pork Tenderloin over a Pork Loin Roast. It's more tender. Or maybe we shouldn't have trimmed the fat off of our roast? I'm thinking we should have left it on, and perhaps our finished product (albeit delicious) would have been a bit more tender. Regardless, I know this works perfectly with a tenderloin, so I recommend using that rather than the loin roast.

Anyway...Miller was pleased that we used this cut and ignorantly removed the fat cap. His human thought it'd be nice to fry that fat up for a doggie snack. Riiiiggght...his ever blooming 119 pound frame needs more lovin'. 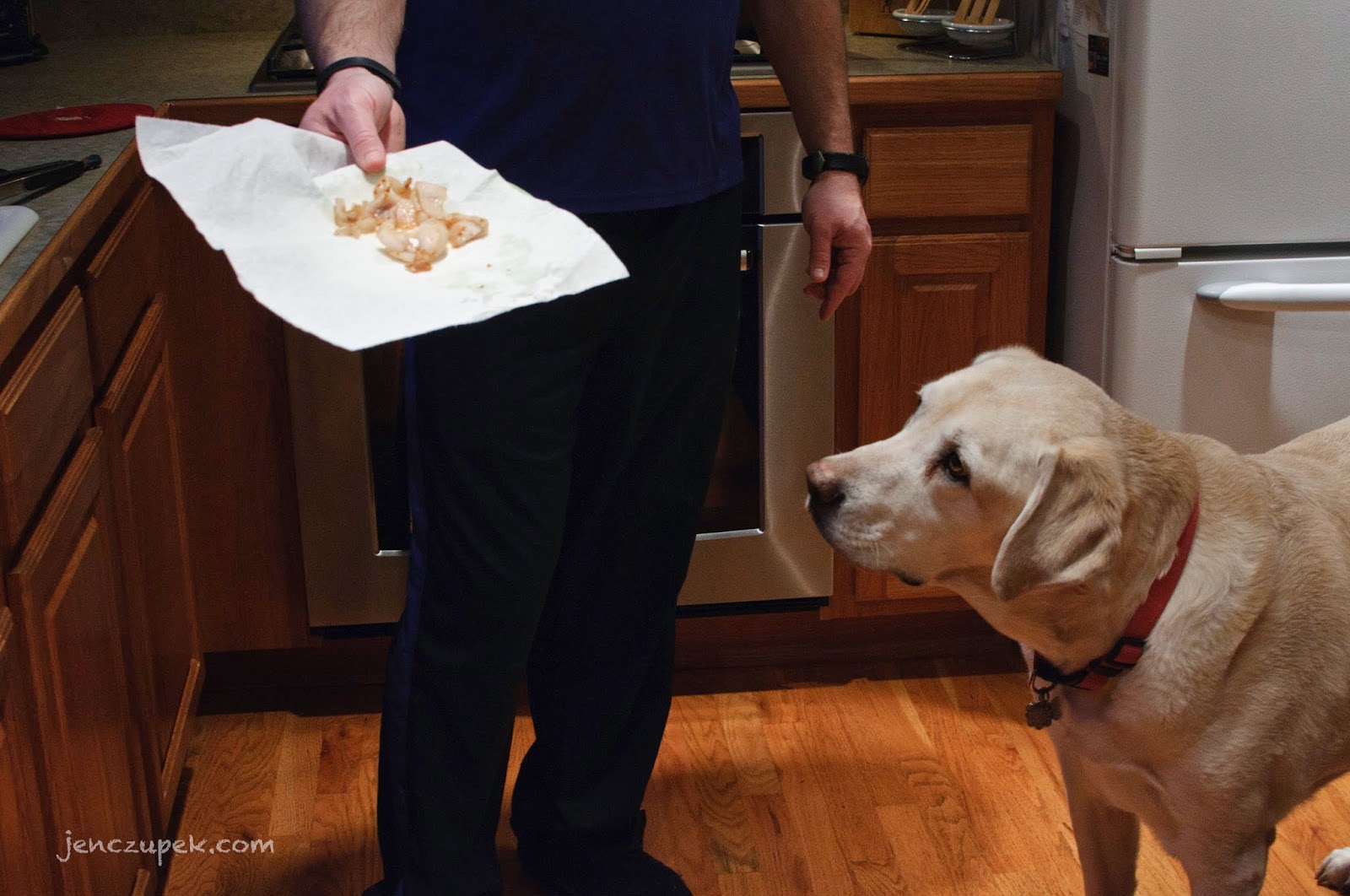 I think the human just likes to mess with him. And play hide and seek. And spoil him like he's a human baby. Yes. That's it. He likes to pretend he's the third child we never had.

OK - back on the clock. Fry up that pancetta. 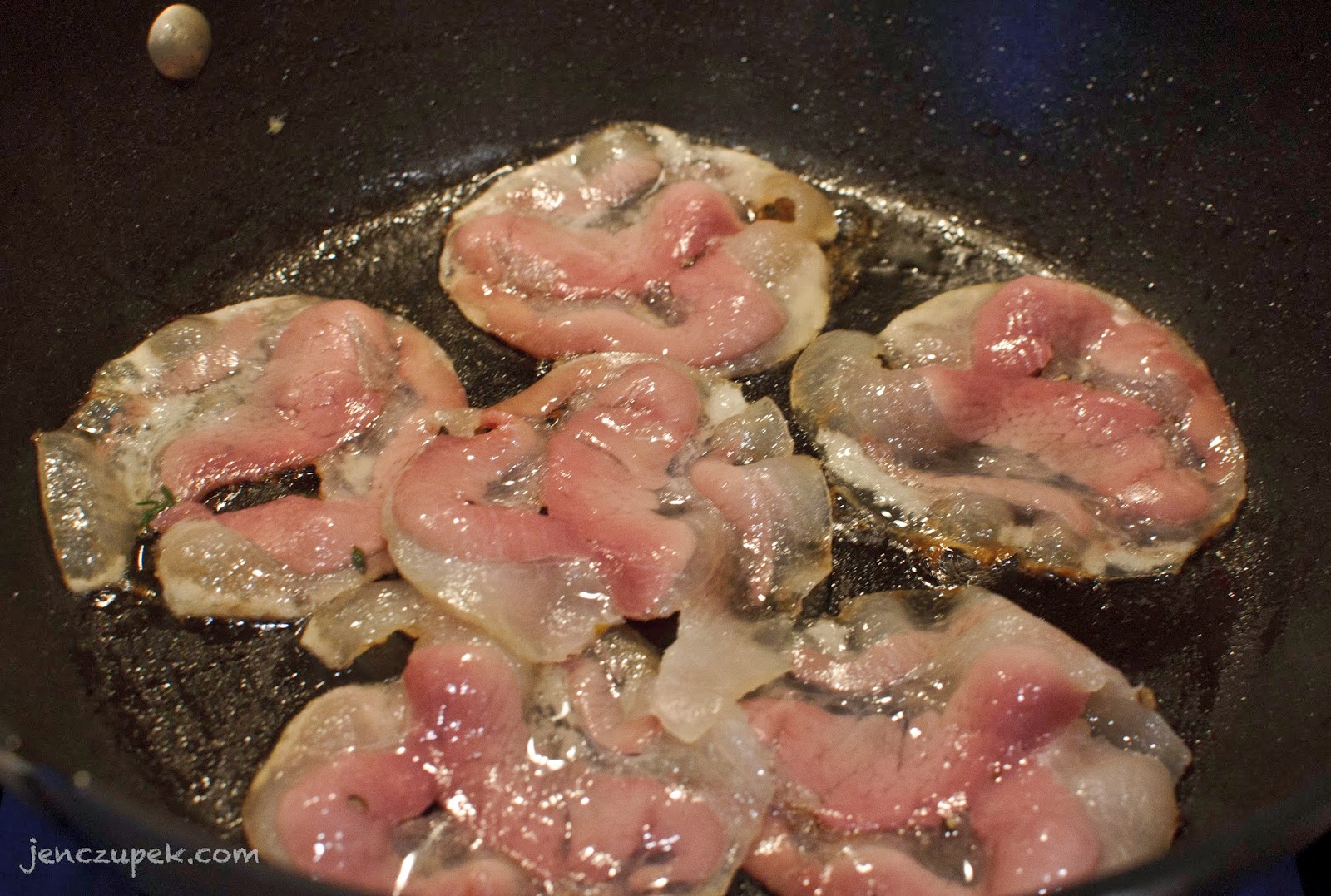 While that renders down and gets crispy, pull out the best Christmas gift you received - a kick butt chef knife. I'm serious. This is hands down my favorite Christmas gift ever. See? Miller's not the only one that gets spoiled around here. Thanks, Honey! 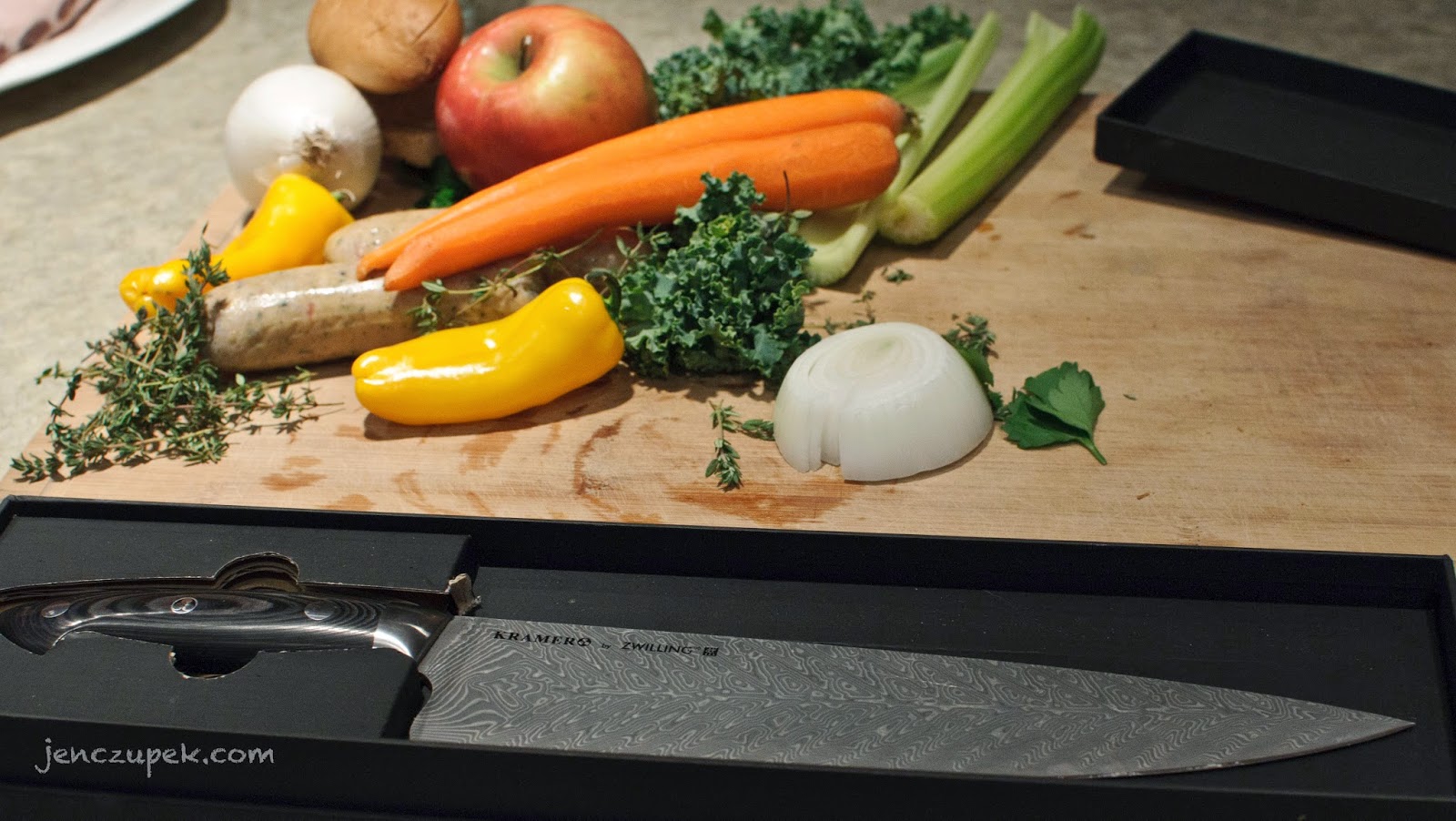 I really, truly enjoy sipping a cocktail (this night it was the Basil Fling - I told you I'm addicted) and chopping with music blaring in the background and all my people around me. This night, it was a little Bruce, a little Stevie Ray Vaughan, and a whole lot of Kahley's choice - "Stacy's Mom has Got it Goin On" or some such thing on Muse. It's her concession to us. Rather than killing us slowly with country music, she compromises and plays some decent tunes from the late '90s / early 2000s. The kids sometimes float in and out on Fridays, and other times they are there for the majority of the duration. Someday, I'm going to really miss these nights. But until then, I'll smile, sip and chop. And listen to and watch the antics unfold.

Once the pancetta is done, drain some of the fat, leaving a couple of tablespoons, and toss in the vegetables to soften and wilt them up over medium heat. Season them with salt and pepper. 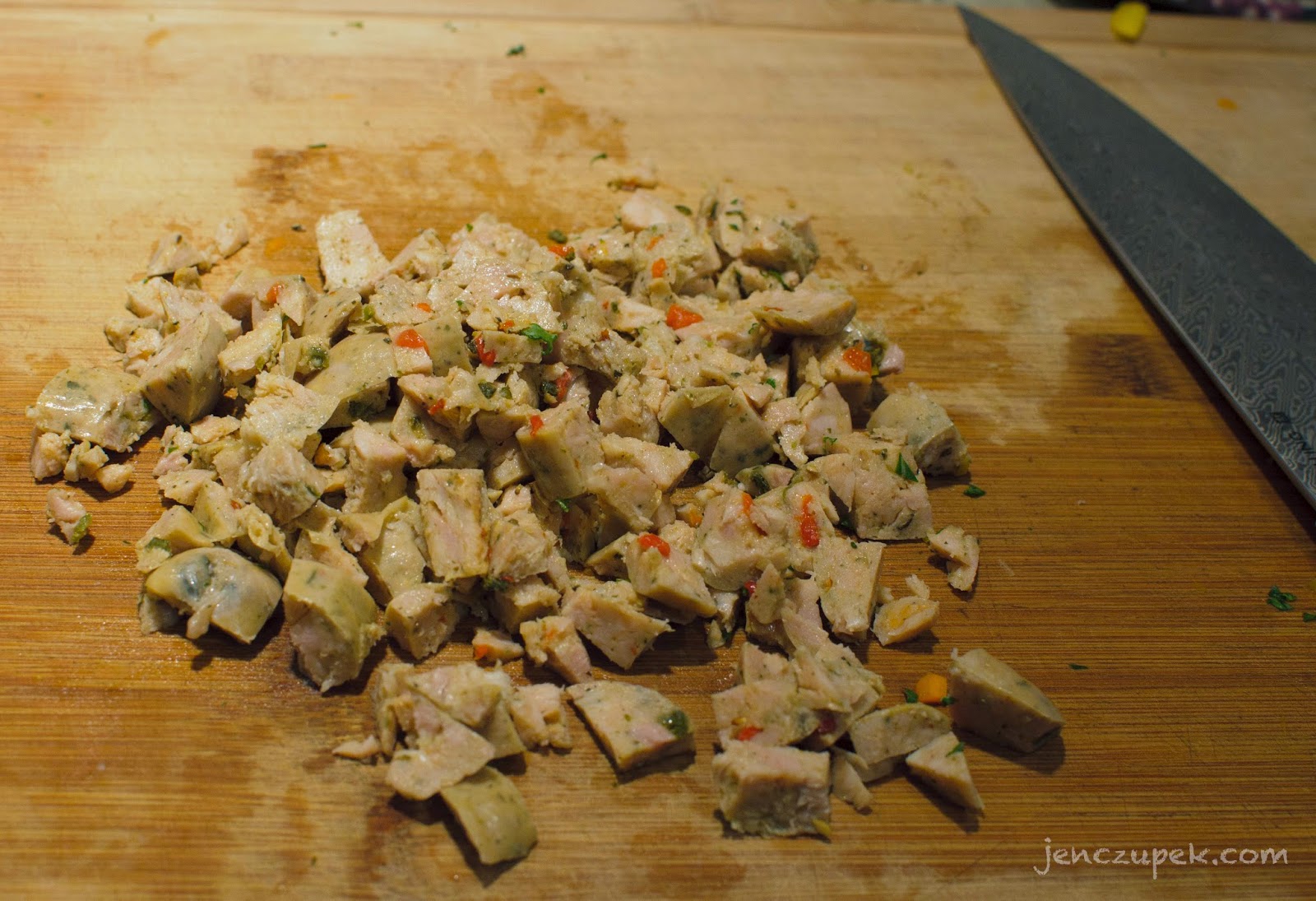 While that's cooking, chop the chicken sausage and dice the bread and apple. In a separate pan, melt some ghee or butter, and toss in the bread, crisping it up over medium-high heat. Get them to breadcrumb consistency. Toss the garlic, thyme and chopped parsley in with the vegetables, and add the chicken to just heat it through. Add the breadcrumbs and apples.

Pause to giggle at the circus animal tricks. Fried fat could be a very useful training tool, if we were into training our pooch. 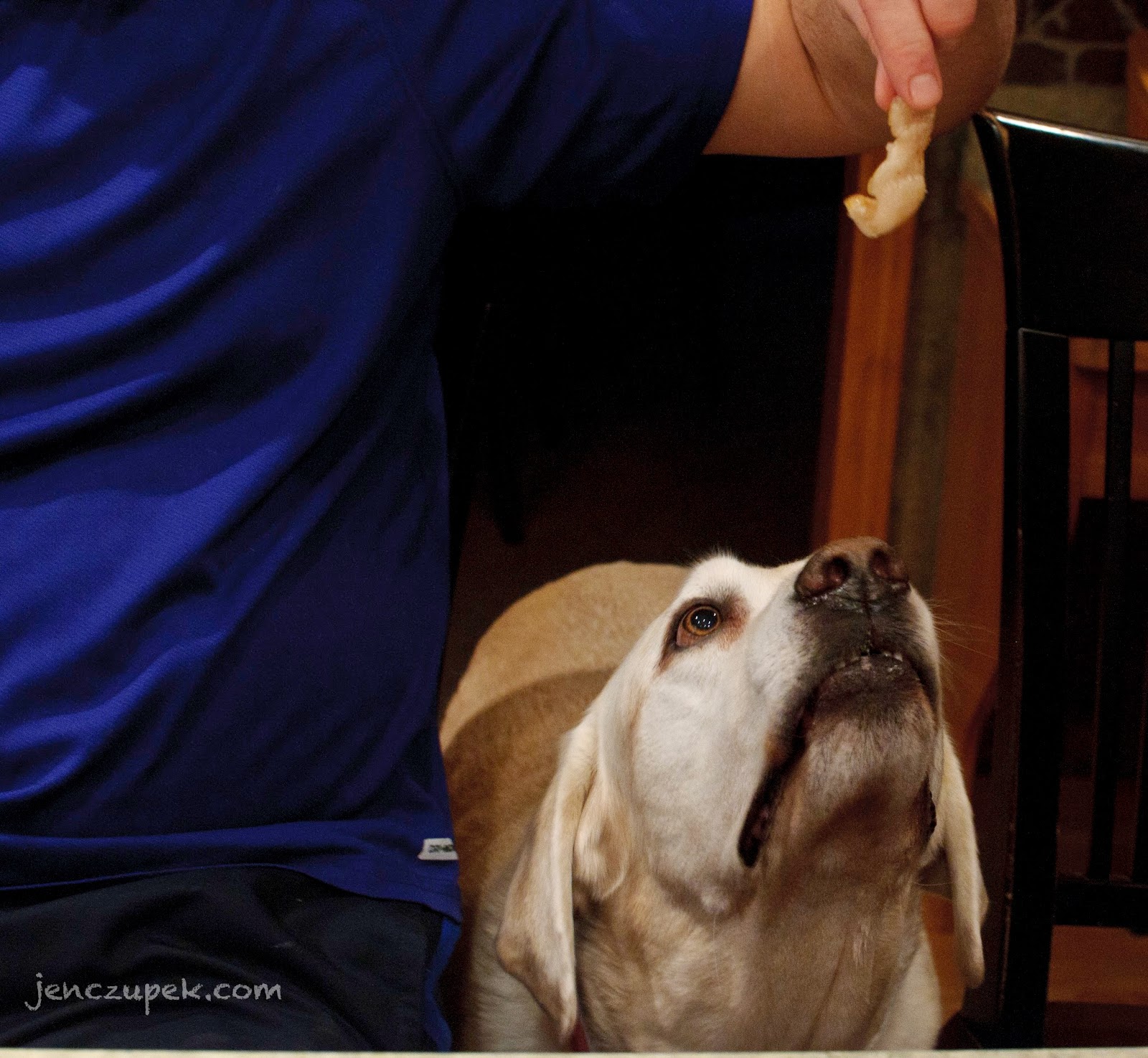 Back to the stuffing. Give it a stir, turn the heat off, and taste. Adjust the seasonings if necessary. 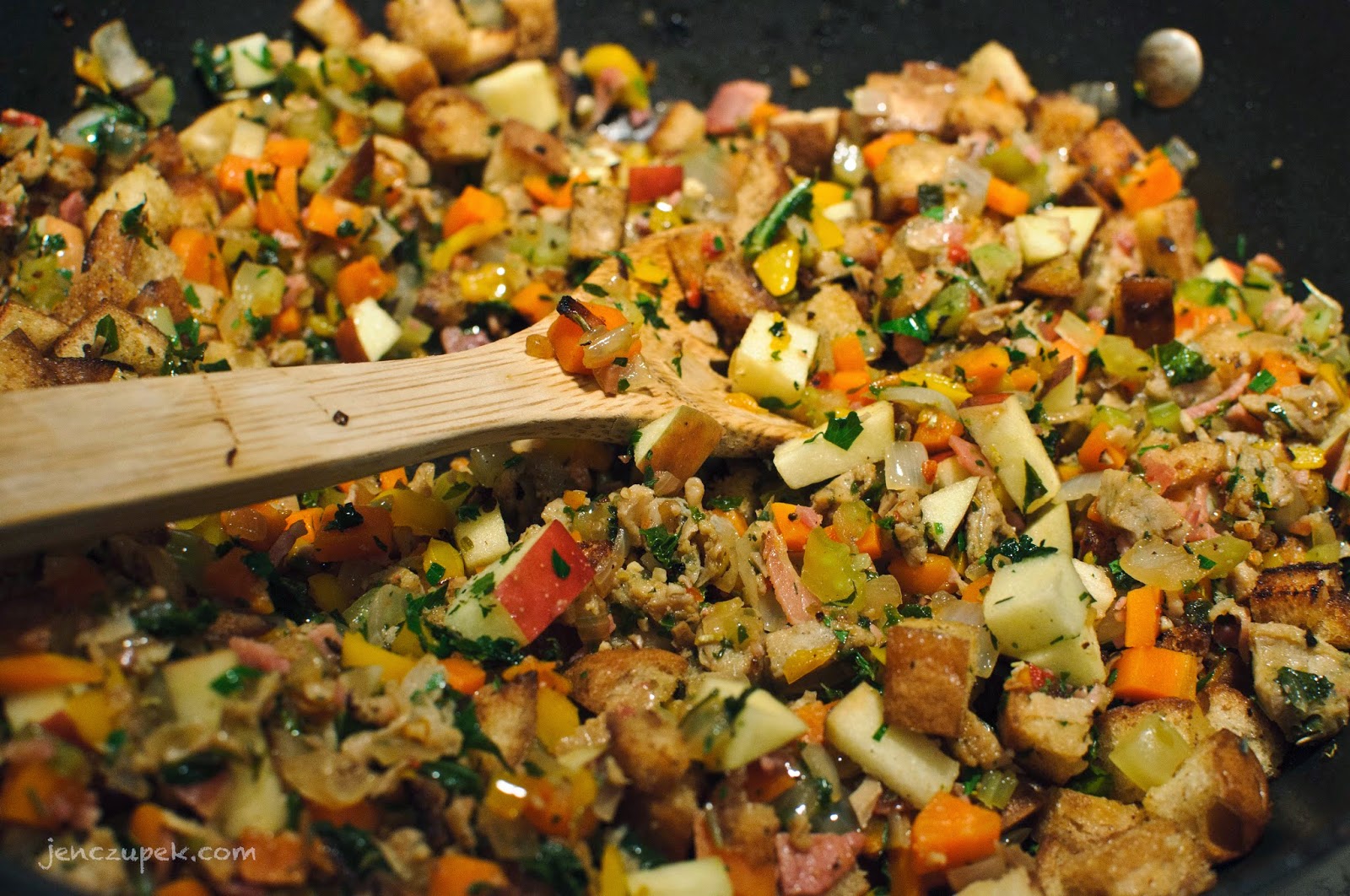 This is a very large amount of food - too much to stuff a tenderloin. But here's the beauty - this tastes awesome alone, and covers both the protein and vegetable equation of a paleo diet. It's also fantastic when warmed up with a fried egg on top for breakfast. I realize that gluten free bread is not necessarily doable for some, so omit that if you'd like. You could take about 1/3 of the stuffing and mix it with an egg or two to bind it better, but I did not. I could care less of the stuff falls out a bit. Once it cooks inside the roast, it all melds together and stays put.

I'm getting ahead of myself a bit. Back to the roast. While you're cooking up the stuffing, employ your Sous Chef to cut the sucker in half, but not all the way through. Leave a "binder" on one end and open it up butterfly style, like a book. In the original recipe, he also punched it down to evenly flatten it out, but that wasn't necessary this time.

Spoon the stuffing onto one side of the roast, fold it shut, then tie it up with twine. Mr Musky tied while I held it together. What teamwork. Then season the puppy. The roast that is, not the dog. We use this awesome mix, 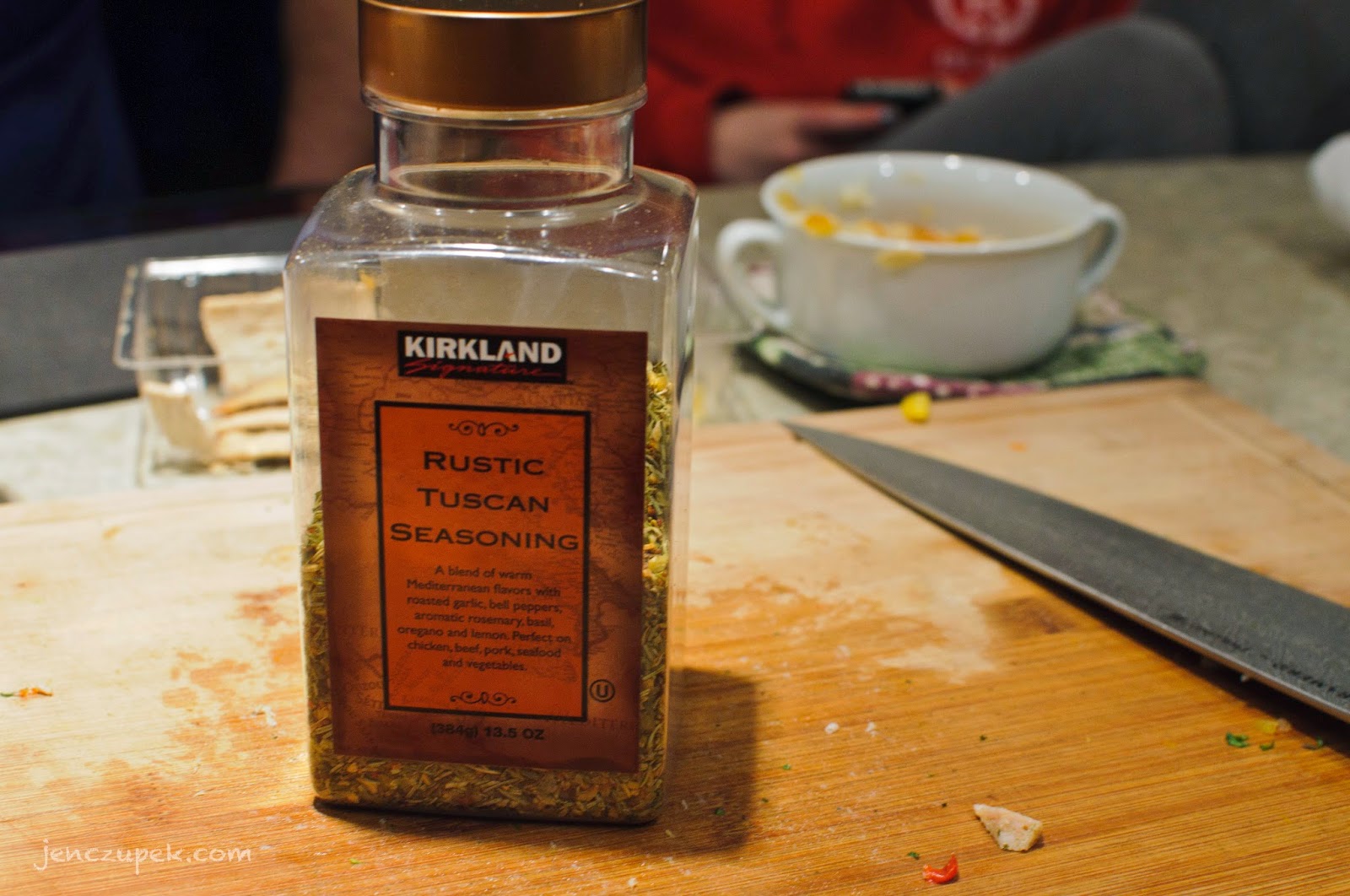 but you could use any mix of seasonings you like. Italian blend, Southwest, whatever flavor profile you're going for. Good ole S&P would work too. Put a meat thermometer in the thickest part of the meat, 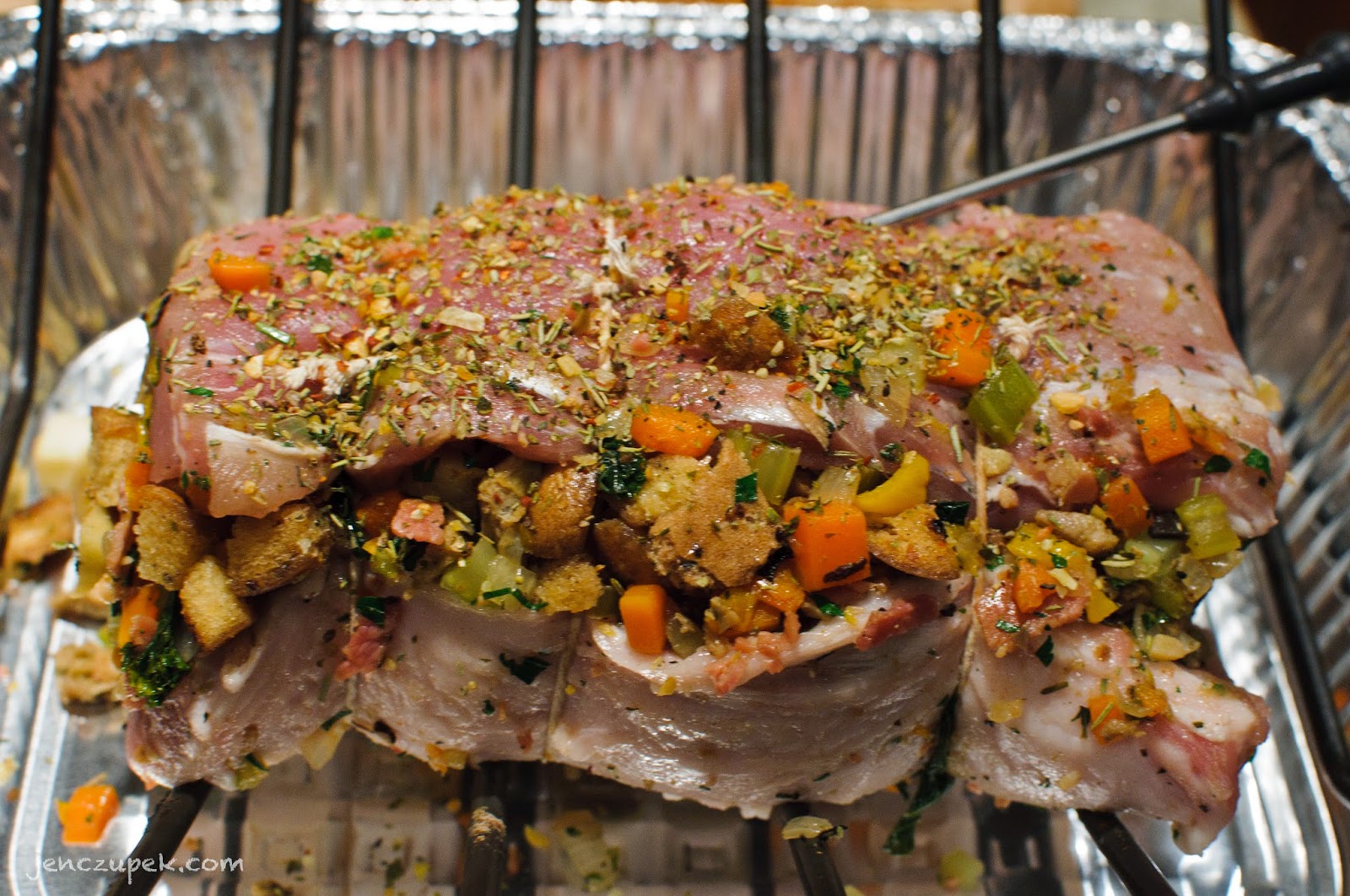 and roast it to 155 degrees in a 350 degree oven. It'll take about 45 minutes to an hour. Just enough time for the entertainment to make fun of their father's attempt at the selfie. We took this the day before on a date. 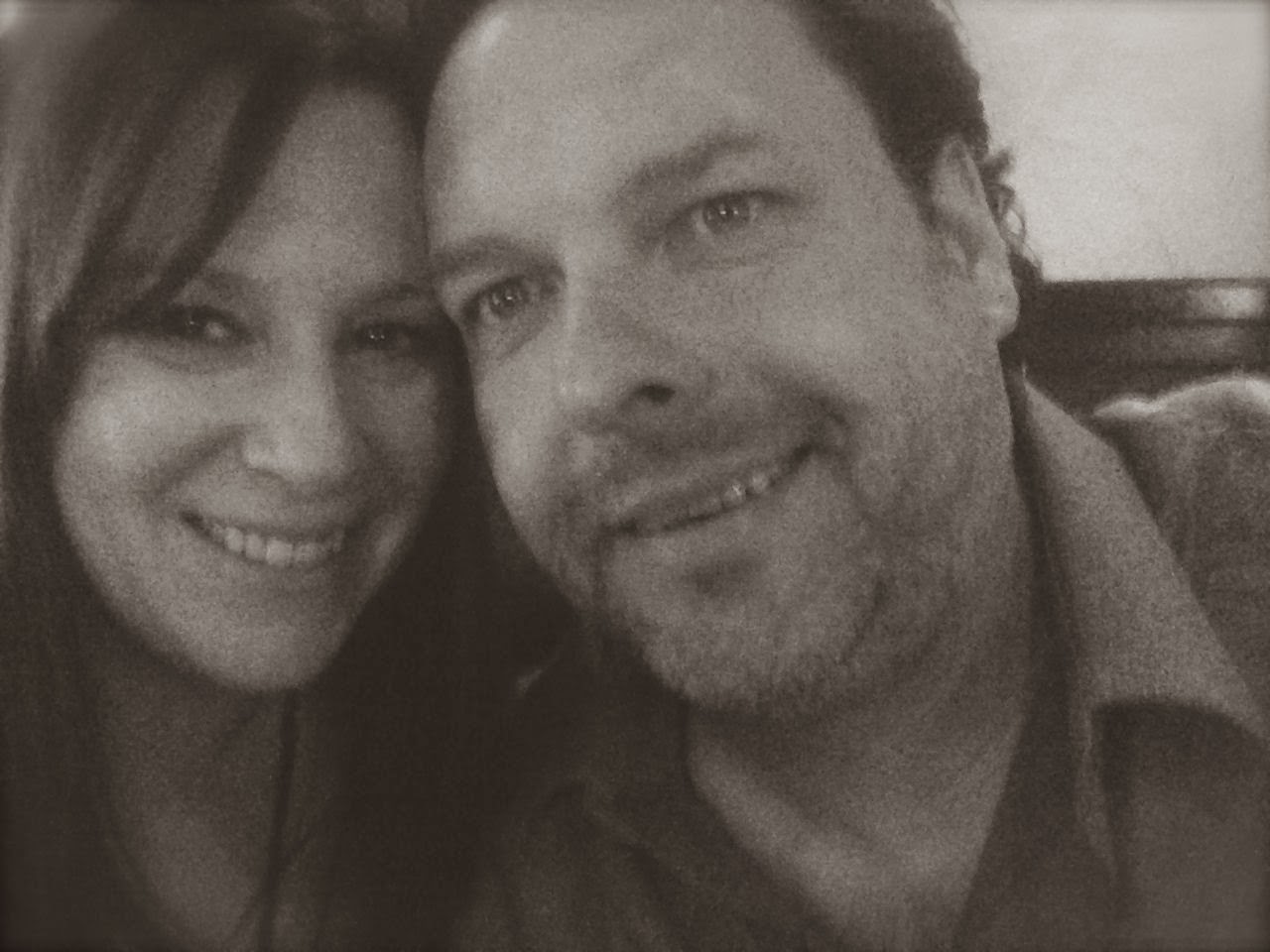 Apples don't fall far from the tree around here. If you want to dish out a good dollop of sarcasm and exaggeration, then you'd better be able to take it. 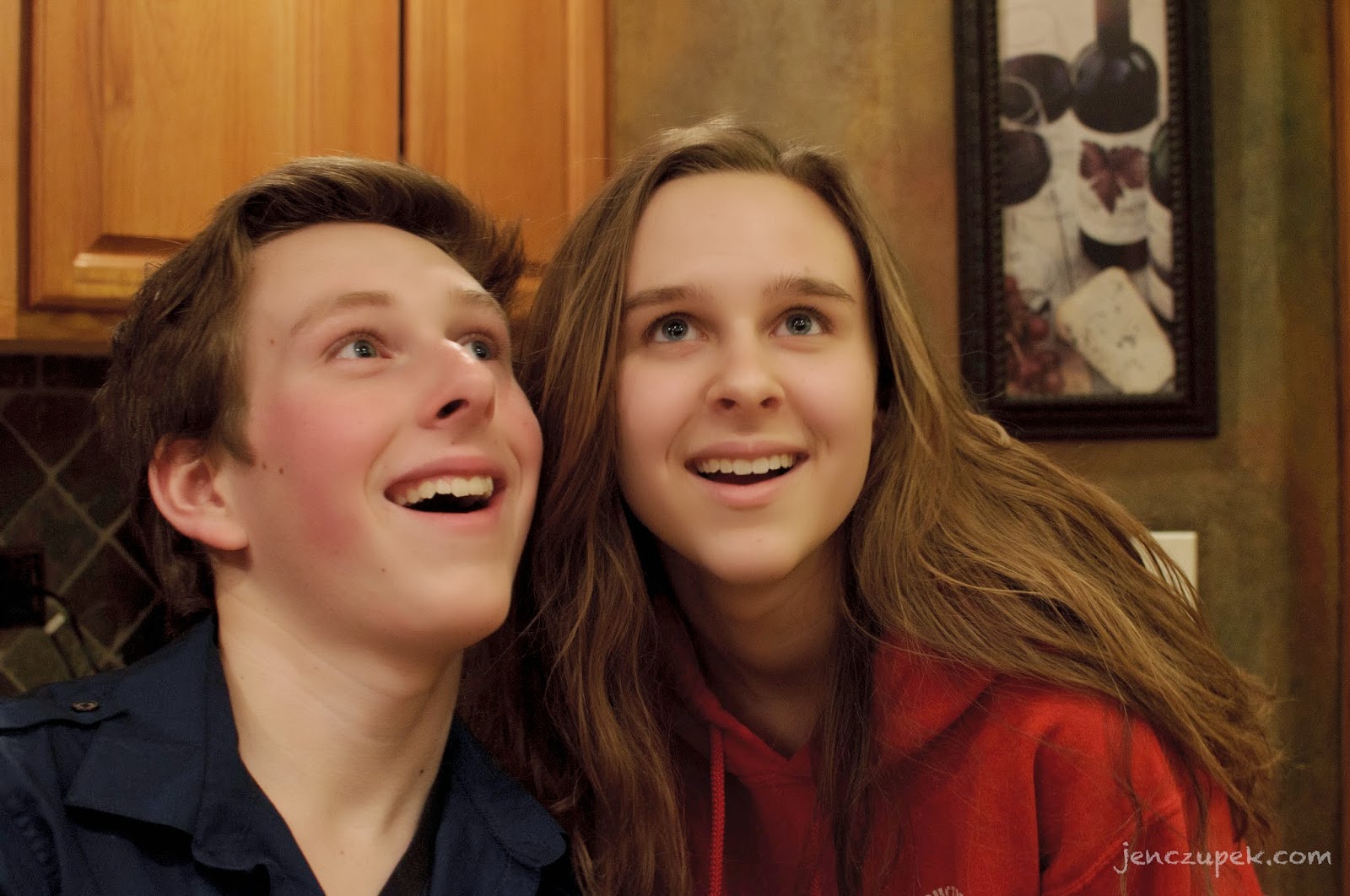 They crack me up. While feelings get hurt (faker) and mock apologies are made, chop up some vegetables to roast. I used a butternut squash, a head of cauliflower and some broccoli. I tossed it with some melted bacon fat (Mmmmmmm. Bacon.), salt and pepper and roasted it at 500 degrees for about 20 minutes while the pork rested, flipping them with a spatula 1/2 way through. I'm telling you, if you've never had vegetables cooked this way, it's a must try. 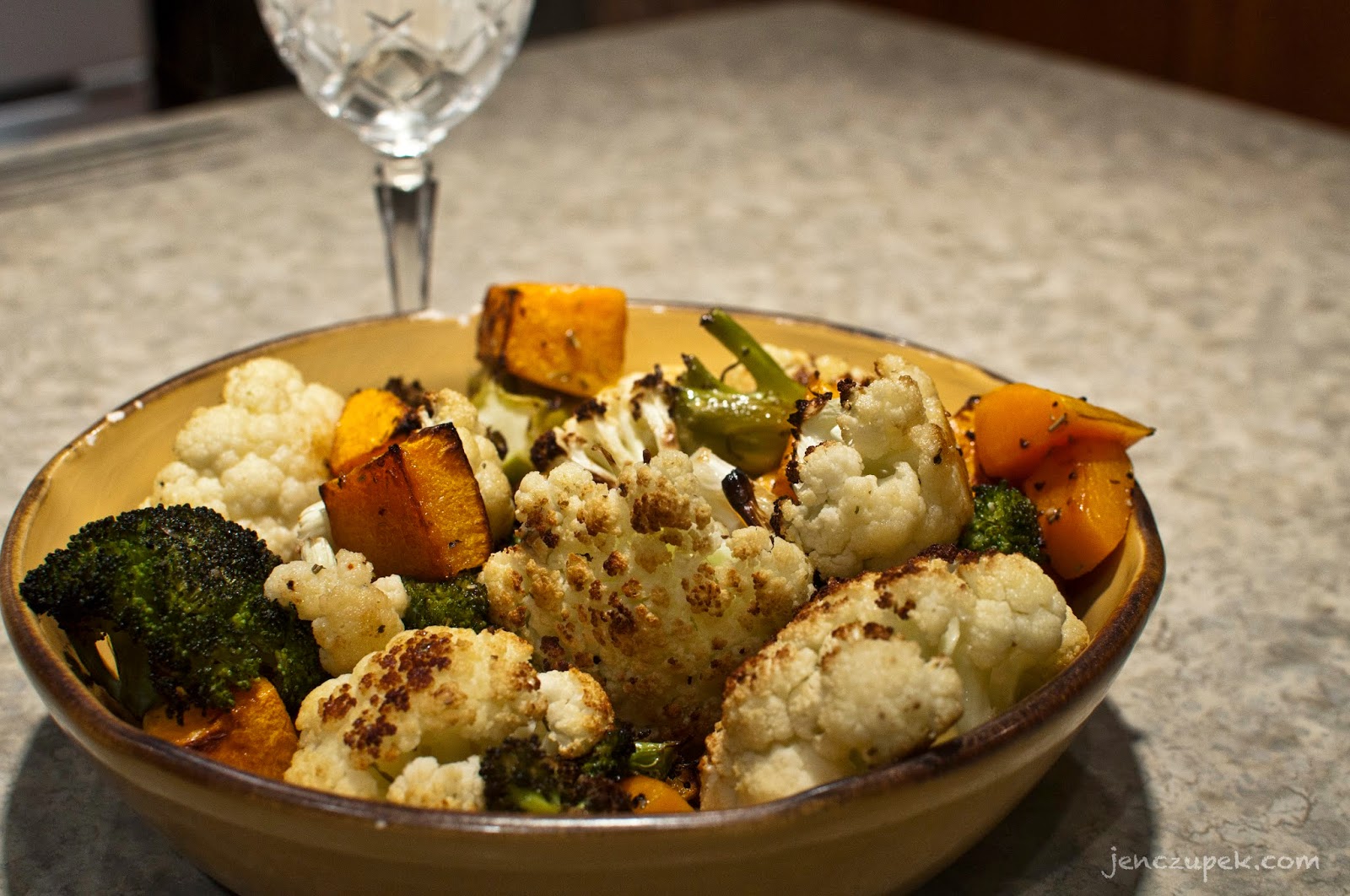 They are the perfect accompaniment to this hunk o yummy. And the wine is a must. Always the wine. 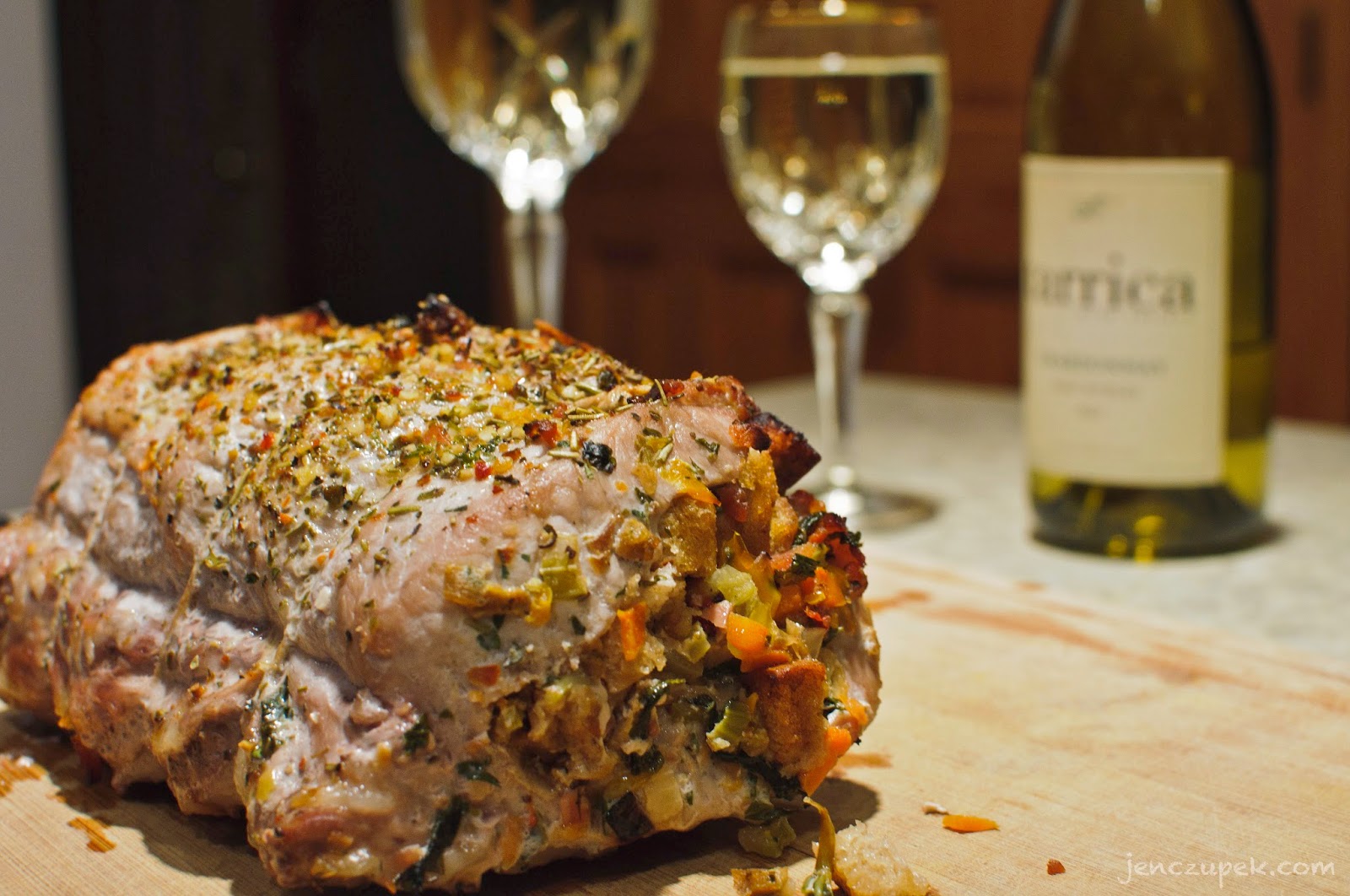 I truly enjoy doing this. This sharing of the food and drink and joy in my kitchen on Fridays. I hope you like visiting here and reading about it. If you have any ideas you'd like us to try, I'm a willing sucker!

We're off to thrill in some Spring Breaking. Coming soon - nothing but seafood with a spectacular view.