I'm That Mom - at a Hockey Game

It's official. I've become that Mom. You know the one - the annoying, nutso, out-of-her-ever-living-mind whack job of a mother on the sideline watching her kid play a game.
For years, I prided myself on keeping it cool when it came to watching my kids play sports. Probably because they were marginally interested in whatever they were doing, and let's be real - kindergarten tee ball does not an exciting afternoon make. My kids were the ones out there picking flowers and watching the clouds roll by, and I could care less. I was more about "When can we go home and have a drink?" or "Why do we really need to be here 45 minutes early when the coaches pitch the ball?" I saw it for what it was - an introduction to exercise, not an entrance to the major leagues.

Hindsight tells me I should have been "all in" with tee ball. Or soccer. My indifference resulted in my kids picking up the two most dangerous (and expensive...hello?) sports - hockey and horse back riding. 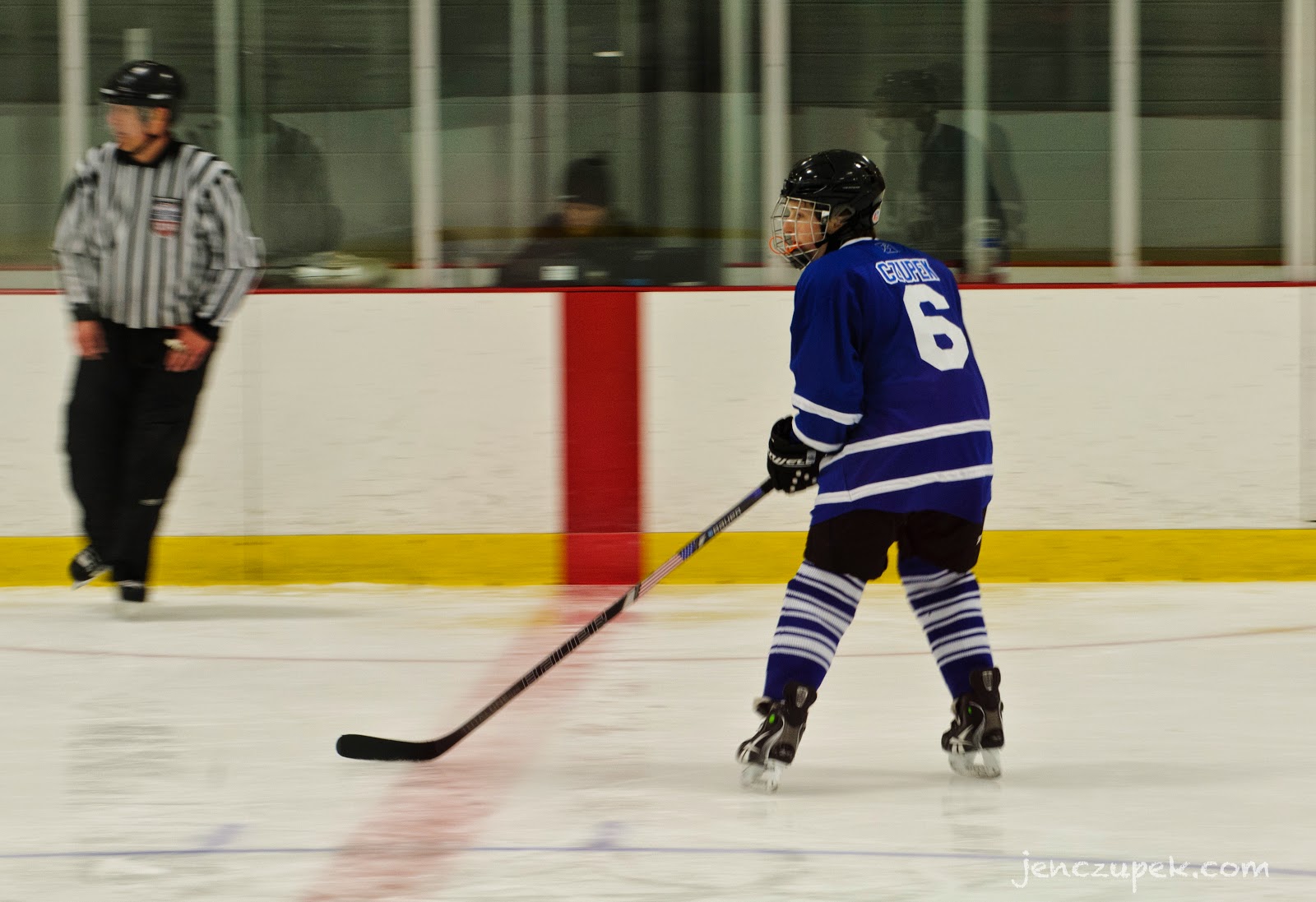 As the kids got older, I found myself watching the parents just as much as the game. To be fair, most are cool and respectful and cheer appropriately. But there's always a handful who border psycho. They yell at the refs (who are volunteers or paid a pittance), the other team's players, their own kids or even parents on the opposing team. Not excessively, because they'd be thrown out. But just enough to show their inner crazy so only those sitting nearby can hear. And they are the ones whose kids get into fights on the ice resulting in ejections. Apples clearly don't fall far from the trees.

So...based on my initial statement, you may be thinking I'm one of those now, yes?

Jake is now playing high school hockey in a full contact league. Which means they check. Meaning (because I know all of you don't get the goofy hockey lingo) they use their bodies to separate the opposing player from the puck. Which sometimes 'accidentally' translates to elbow jabs to the head, sticks bashed in the back, collisions into the boards, or getting laid out like a grease spot on the ice by a kid twice your size. Mmm hmmm. That would be my kid the oil stain, his first time in a checking game last season.

I hyperventilated, pooped my pants and nearly died in the stands.

So here's me in all my super fan glory now:

Sitting in the fetal position like a contortionist. It's possible. Every muscle clenched. Sliding back and forth on the bench as the puck goes up and down the ice. Climbing all over Mr. Musky, linking arms and intertwining legs and anything else I can muster when the puck's to the right (he always sits to my right. and sleeps to the right of me in bed. Am I alone in this weirdness?). Increasing the gap between us by two feet or more when the puck's to my left. When my kid leads a breakaway, I holler "Go Jake, GO!" over and over as I slide left and flap my arms around like a goose, helping him shoot the puck into the goal. When a defenseman is approaching him on open ice, I whisper "Careful, Careful!" and might just hope the kid loses an edge (bad mommy). When any of his teammates gets checked, I'm all, "You're OK. You're OK." or "Get up, GET UP!" while sending telepathic messages to the kid's mother that her son is just fine. When they are on the boards and are fighting for the puck, I'm all: "Be nice. Be cool. Be nice. Be cool."

Don't ask me why I speak in doubles. I'm a being possessed. 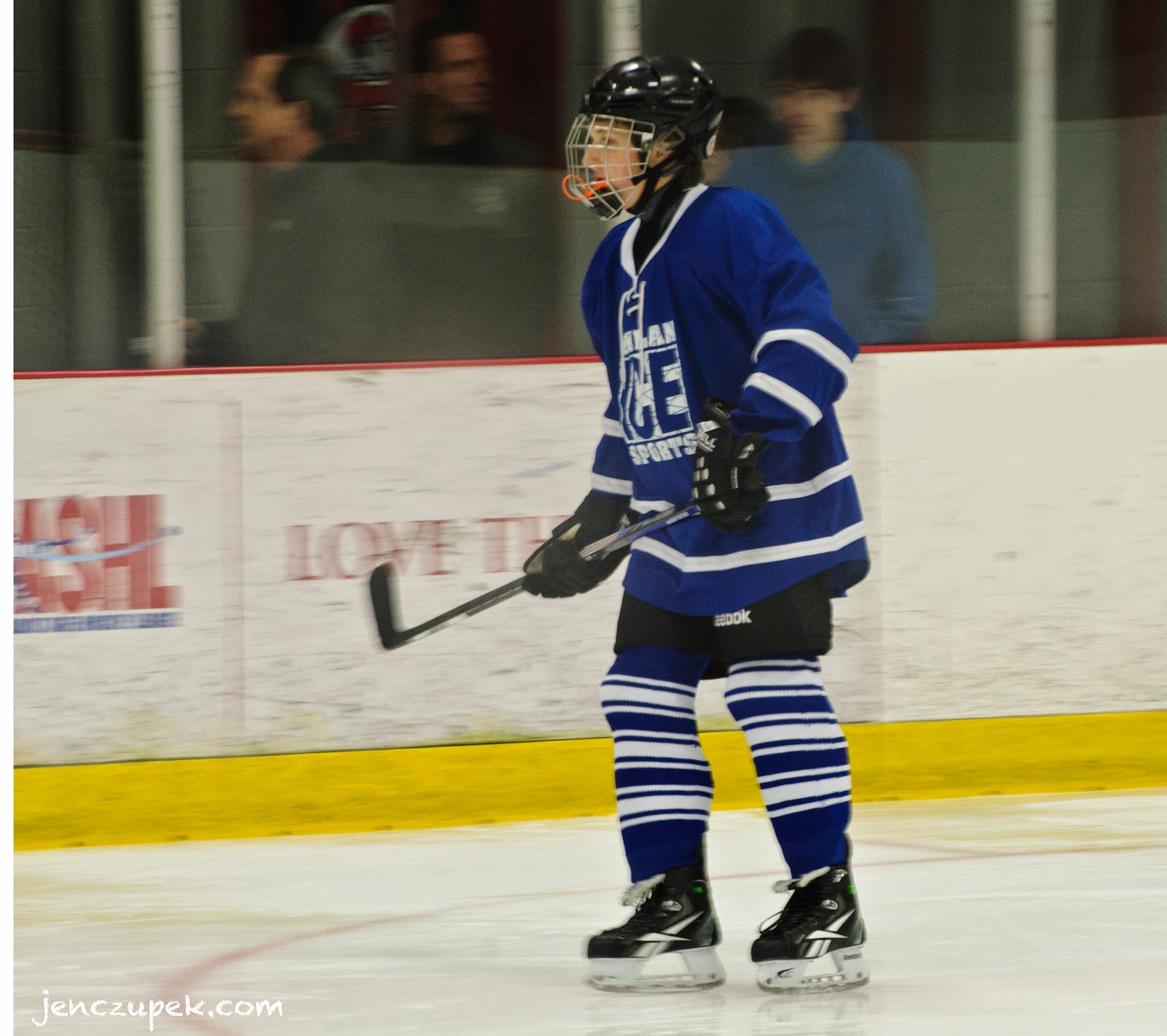 Aside from GO JAKE GO, my comments are all barely above a whisper. So unless you're sitting right next to me, you'll never know my level of neurosis. Mr. Musky just looks at me. And asks, "What exactly the hell is wrong with you?" But I'm telling you, some third dimension creature enters my body, leaving me controlled by an evil spirit. All my life I've handled stress fairly well, but I simply can't manage myself in a hockey arena. I agree with our club president. All rinks should have an in-house spa so I can calm myself before a game. But I'd expand the spa concept to include vodka martinis, chocolate truffles and fluffy cashmere robes with bunny slippers to ease the angst I have to endure.

I rarely criticize anyone directly, unless the behavior is ridiculous. Regarding the aforementioned kid who got thrown out for fighting in one of last year's IN HOUSE games (where checking's not allowed and the game is just for fun - NOT!)...it was a skater on the opposing team, he pinned one of Jake's teammates to the ground and started pummeling him. I stood up and screamed at the top of my lungs: "NOOOOOOOOOOOO! That's MEAN!"

I know it was my hyena voice that made the punk stop, because nobody likes to be called mean. But perhaps the ref who pulled him off by his shoulder pads and shoved him toward the locker room helped get my message across.

Another time last year there was a 'retribution' hit for a kid who left a travel team to play with Jake's group. It was a deliberate hit to the back, the kid's neck snapped into the glass, and he ended up with a concussion that kept him out of the sport for months. The next day the brat posted his glorious check on social media, bragging about making the kid pay for leaving their team.

What is wrong with people? My stomach literally still turns thinking about it.

If you think this is bad, then you should see me at a Horse Show. Watching my girl control a 1000 pound animal with her legs.

More on that visual next week.