I've whined and griped before about our messed up schedule this fall, and it keeps getting worse. Rarely do we find ourselves gathered together on a Friday night anymore. Or a Saturday night. Or even a Sunday night.

So recently over coffee I glanced at the calendar for that evening, and nearly leapt for joy that it was empty on a Thursday night. I declared right then and there we were having an Apéritif Thursday. Later in the day I received an email from the hockey club to pick up jerseys that night. My text to Mr. Musky: "Over my dead body. You are staying home and drinking two cocktails with me tonight. This is why we have kids - they can run the errands."

I started off with a concoction that had been niggling my brain since Homecoming night, when I served mulled apple cider to the dressed-up kidlets. I poured the leftover cider back into the jug and saved it for...you guessed it... 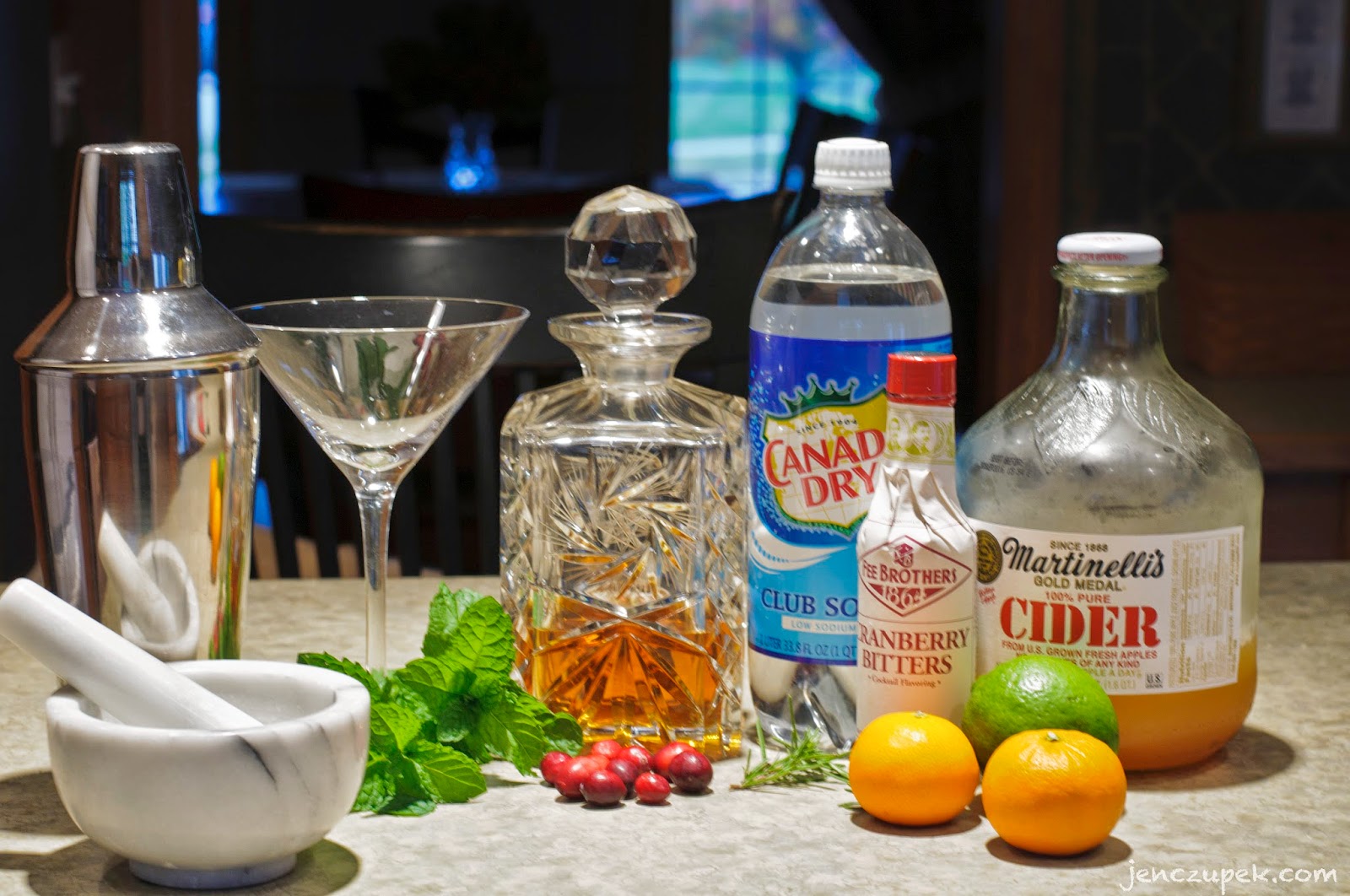 To make this drink, muddle a small handful of fresh cranberries, the juice of 2 clementines and 1/2 a lime, a small sprig of rosemary and 7-8 mint leaves. Pour the concoction into a shaker with some ice. Add 3 oz whiskey and 2 oz mulled cider (or just straight up cider) and a couple of shakes of bitters - check mine out! Cranberry bitters. Where have they been all my life?

Shake vigorously and pour into a martini glass over a fine meshed strainer. Top with club soda, if desired. I did not desire.

Mmmmmm. It was just what I needed to start our fall gathering off right. The cider gave the whiskey an undeniable whiff and zing of fall. The herbs added some earthiness and the juice mellowed it all out and added some brightness and complexity. I may have consumed two.

Meanwhile, I told the kids that the appetizer was a surprise. Jake left, but Kahley stayed to see what was up. Earlier in the day I thawed some puff pastry with the intention of making some kind of a pizza roll up thing. Realizing that wasn't a good name, I consulted the name maker for the night for something good.

I paused, thinking of all the eyes staring at this screen, perhaps judging me. "Yep. That's it. It's perfect. Whorish Pizza it is."

So now I need to tell you the story behind the name "Whorish Pizza."

A few years ago my brother and his family came to Illinois for Thanksgiving at my parents' house. We all went on a little shopping excursion to find little Chloe, my niece, some new boots. As the Clampetts tromped through JC Penney's shoe section, Uncle John turned to Kahley with a pair of red suede stilettos in hand and declared, "Kahley, these shoes are whorish."

Now up until this point, Kahley was terrified of Uncle John. At the age of 2.5 he coaxed her to wet her toes in the Pacific Ocean, where a giant wave promptly swept her off her baby feet onto her wee butt, the undertow threatening to carry her off to a faraway land. A few days later, her infinitely wise parents left her alone with the scary bearded Uncle, who was also charged with the feeding, burping, swaddling and diaper changing of her 3 month old baby brother and cousin. When young Kahley woke up from her nap to find herself alone with the spooky, hairy Uncle John, she refused to leave the bedroom.

She spent nearly four hours alone in that bedroom while her mommy and daddy and Auntie Kelly skied the slopes of Mammoth Mountain.

So forever from there, Kahley was always a little intimidated by the dark eyed giant. She retreated to hide behind mommy, holding her hand, always interested but standoffish when Uncle John was in the room.

Until the shoe incident. Kahley howled at his apt description of the, um, undesirable shoe representing the red light district and deemed him cool forever and ever.

Young impressionable Chloe, however, was left confused and intrigued by her father's description.

My brilliant brother sighed. And rolled his eyes. And tried to blow it off.

He knew he couldn't get out of it. And Kahley was very interested to see how Uncle John would translate the meaning to his sweet girl.

"It means cheap, Chloe. Not good."

His definition sounded innocent enough. And I considered it a reasonable explanation. But I also knew the meaning of "cheap" would be lost on a youngster who hasn't yet reached pre-puberty.

So little Chloe skipped through the mall singing, "Whorish, whorish,WHORE-ISH!" at the top of her lungs.

And my brother sighed some more. He looked at me, that "What the hell do I do now?" look in his eyes.

"Just ignore it. The novelty will wear off."

Hours later, we continued the Quad City culinary tour for my California relatives, stopping at Harris Pizza for dinner. Chloe struggled a bit with the words on the sign. "Does that say...HORISH PIZZA?"

And it started all over again.

"Whorish Pizza. Just like the shoe! We are eating at Whorish pizza. Whorish, whorish, WHORE-ISH!"

My brother ate his words, again.

We talk about Whorish Pizza all. the. time around here.

I rolled out the puff pastry, brushed it with some egg wash (one egg whisked with about 1T of water) then sprinkled sundried tomatoes all over the crust. I added pepperoni, chopped green onions, shredded cheese and added a smattering of dried Italian seasoning. 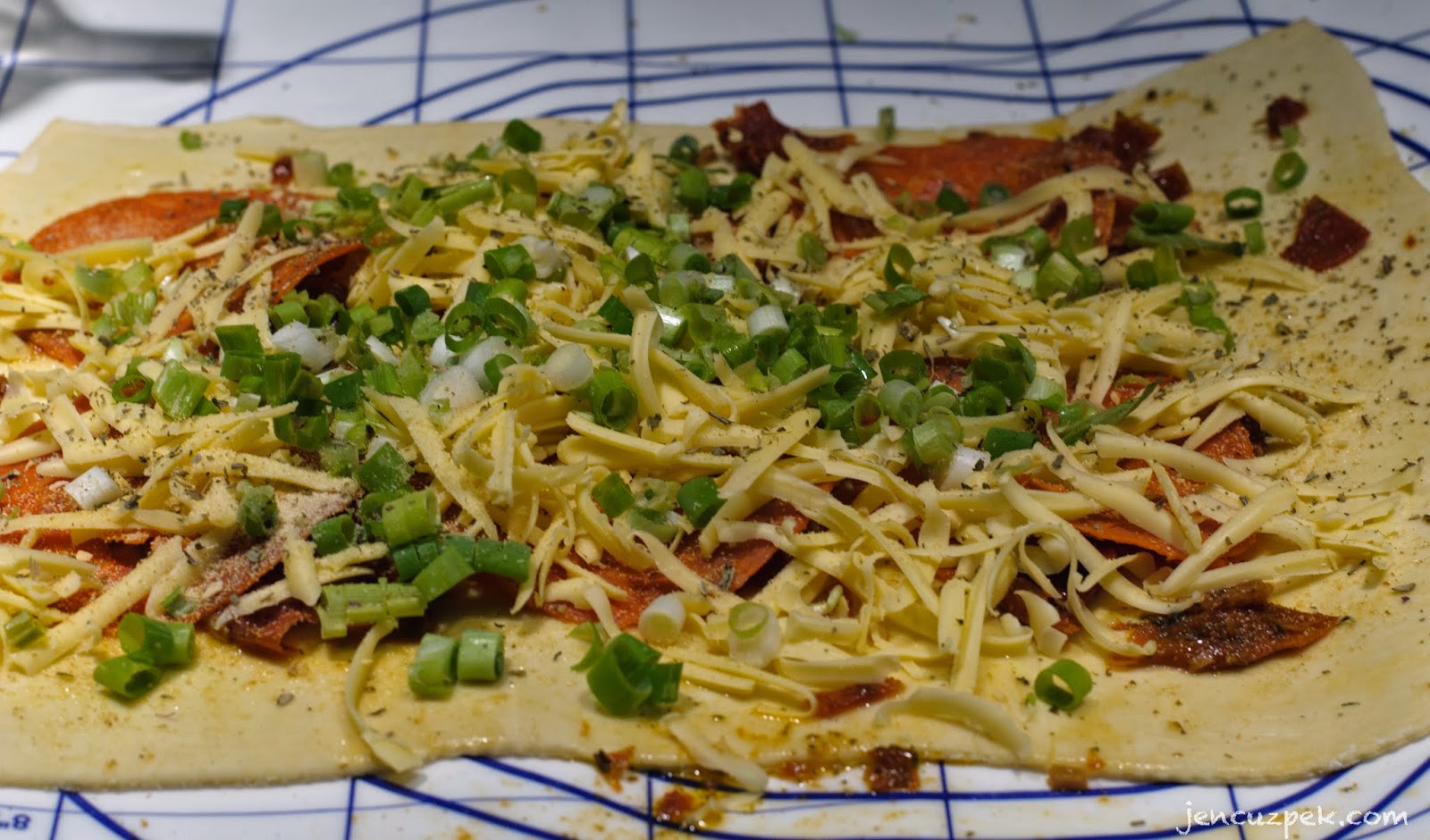 I then rolled the dough up lengthwise,

and sliced it into pieces and put them on a Silpat baking mat (parchment paper would work too) on a jellyroll pan. I brushed each piece with more egg wash, then popped the pan into a 400 degree oven for 25 minutes.

And ohmygosh. These are SO good. Like pizza, but the puff pastry gives a crispy, flaky texture to the tasty little nuggets. 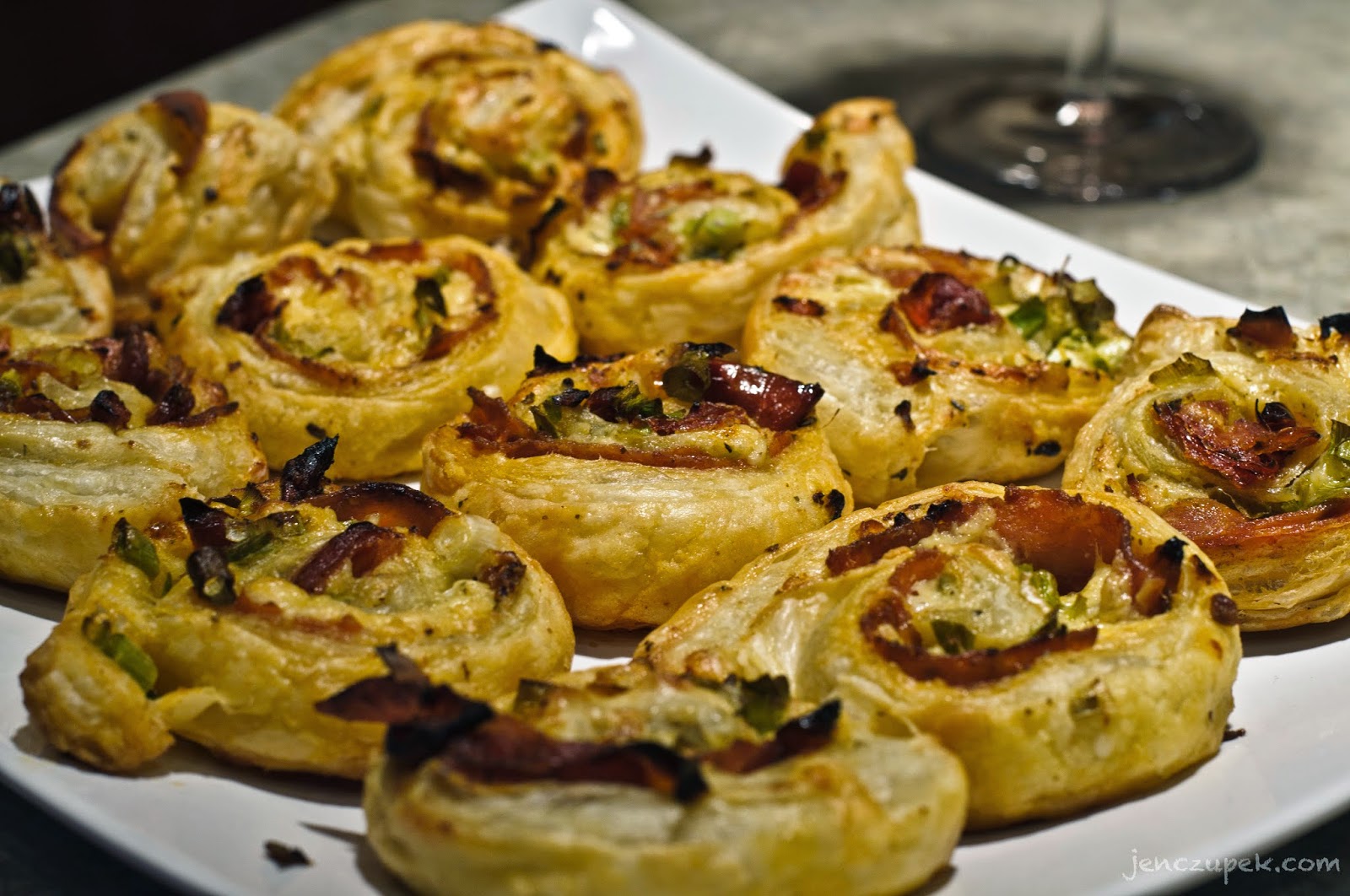 These lasted about 2 minutes. 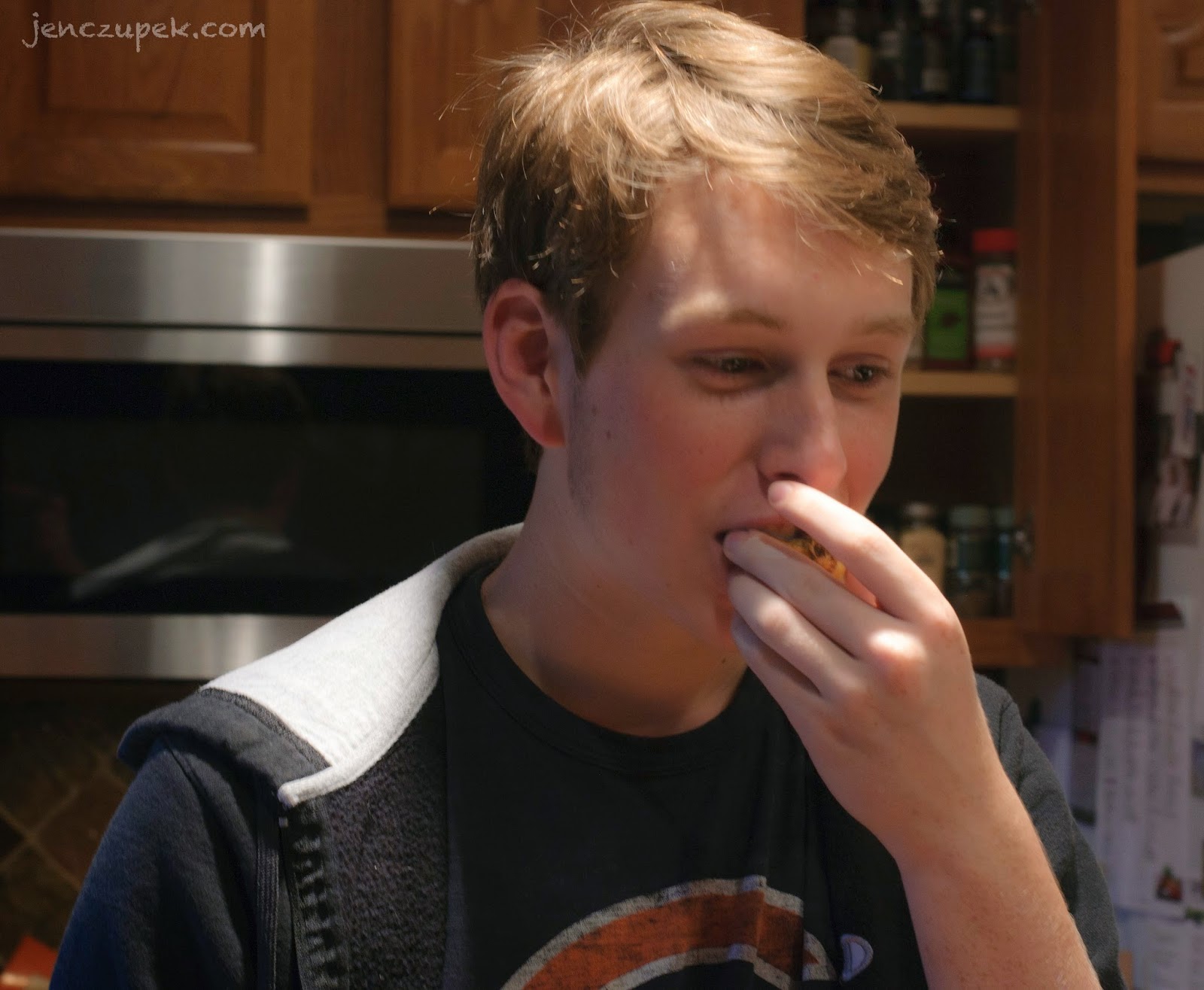 Jake devoured his portion and asked for more. But I told him he had to wait for the main course. 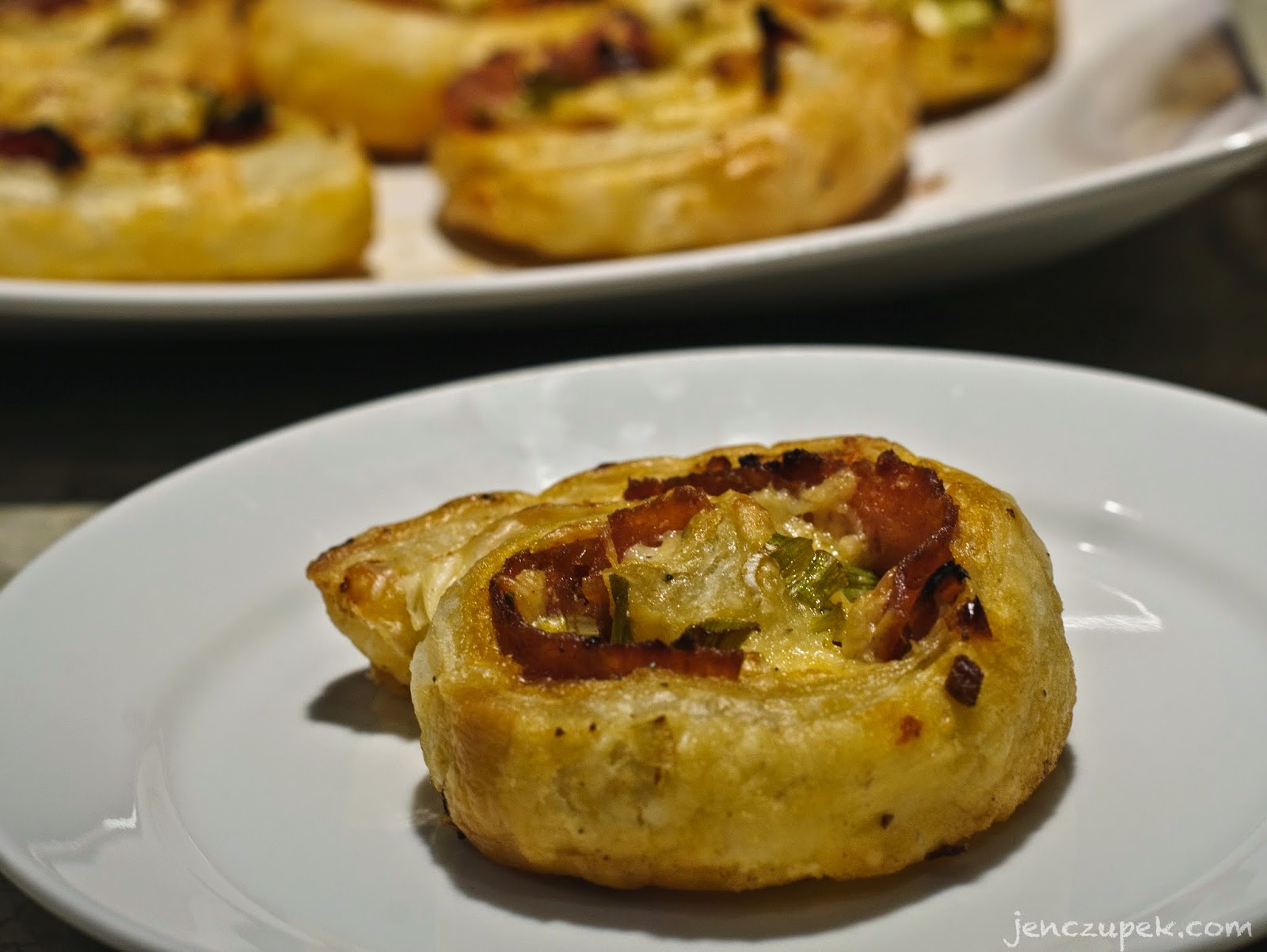 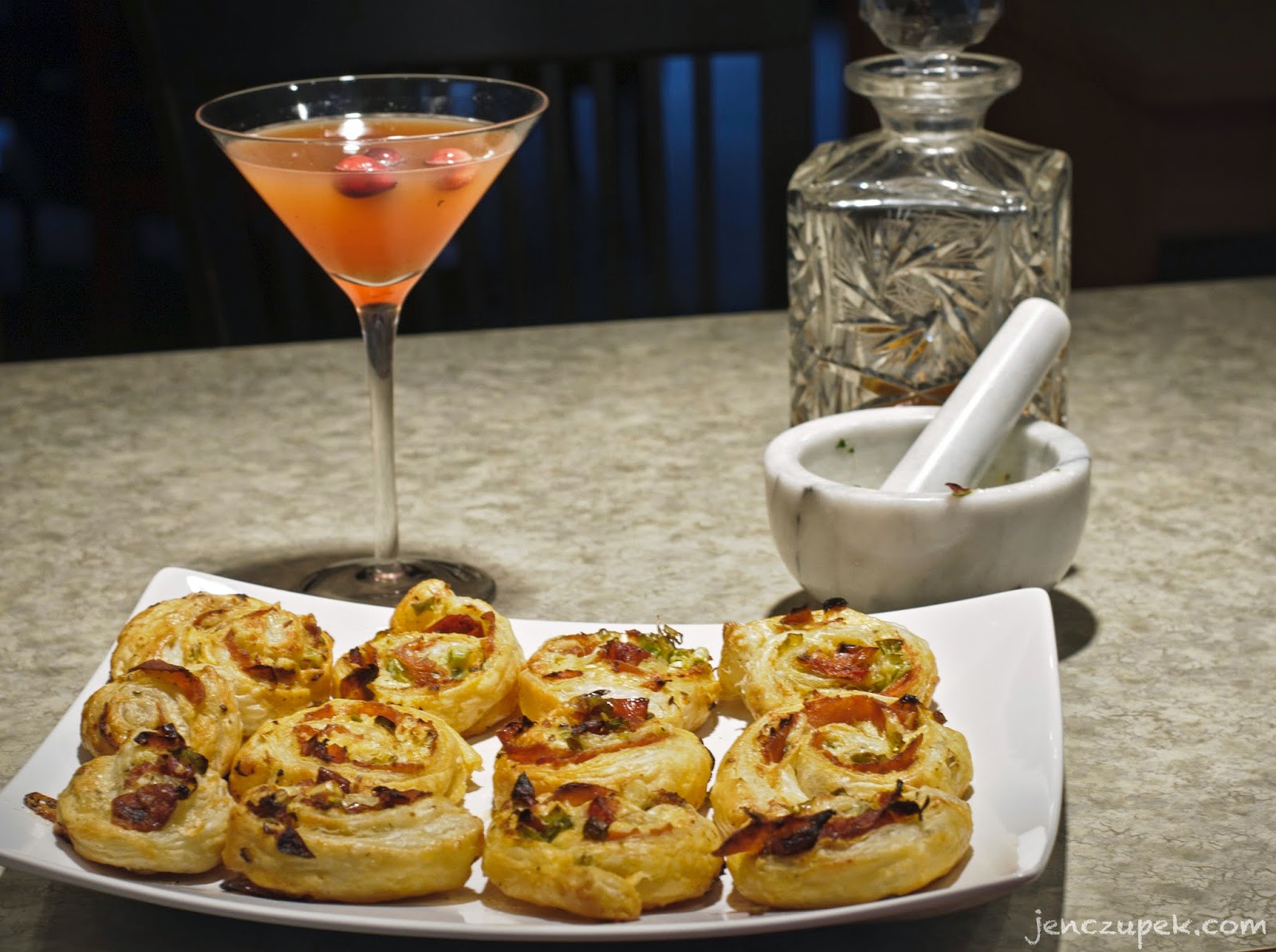 Knowing that this was but a mere snack for my tribe, we moved on to another appetizer-like dish to take to the basement for some TV watching, something else we don't do much around here anymore.

I put the recipe namer to work. I cut a bunch of corn tortillas in half, stacked them up, then cut them into triangles for her to lay out on a sheet pan I sprayed with truffle olive oil.

I thought she'd toss them on and call it a day, but I turned around to see this. 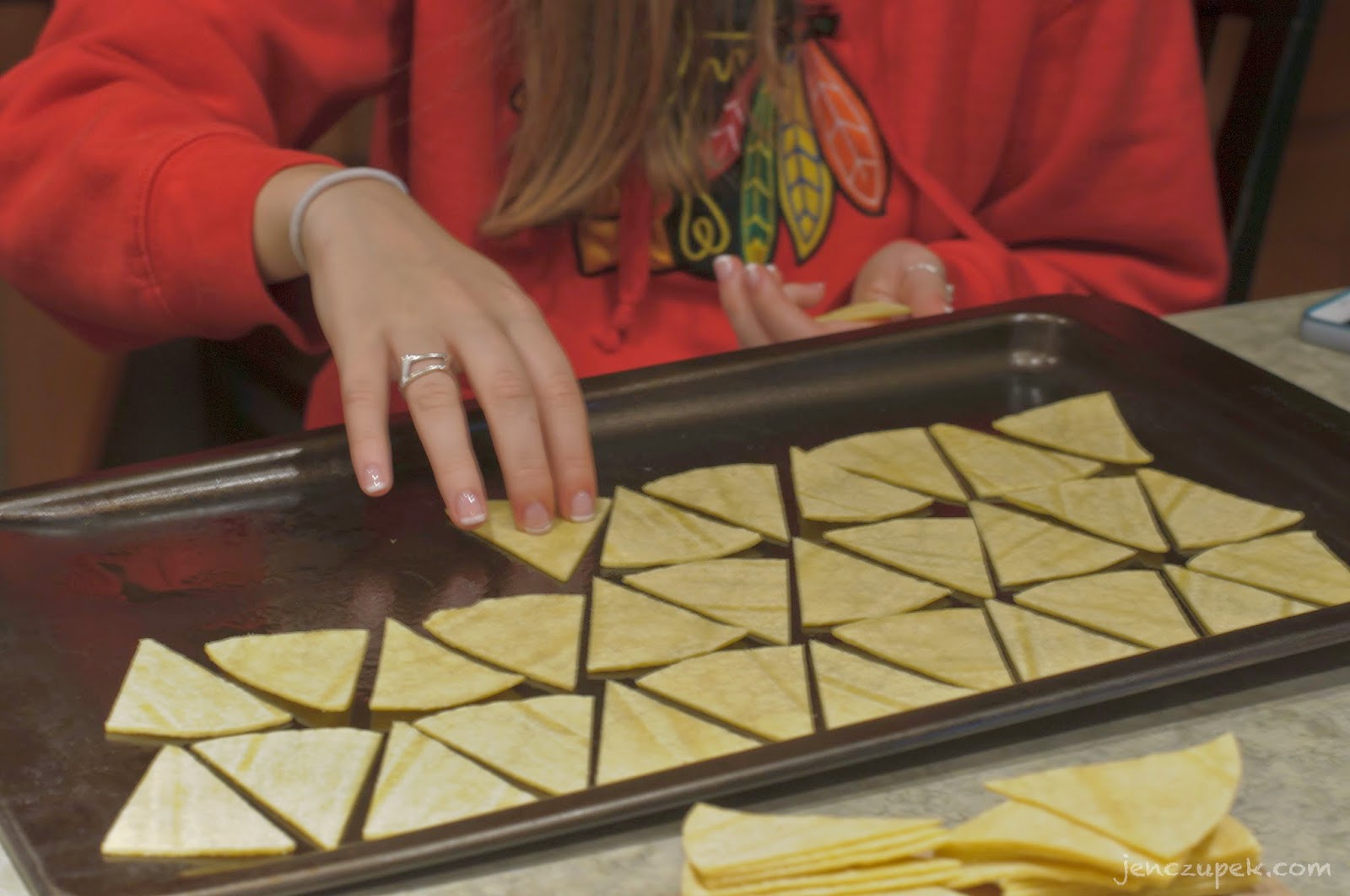 Type A tendencies in full force. I sprayed the tops with more olive oil, sprinkled a little salt over the tops, squeezed a chunk of lime over them, then popped them into the 400 degree oven and baked them for about 5-7 minutes - just until they got a bit crispy.

Meanwhile, I started in on the nacho dip. I browned up a pound each of ground turkey and chicken (any ground meat will work) and added cumin, salt, pepper, chili pepper, cayenne pepper, paprika, garlic powder and onion powder. I just sprinkled the spices around the pan and tasted as I went.

I threw in a chopped jalapeño, a diced carrot and some microplaned garlic. I topped the mixture with some shredded aged white cheddar cheese and popped it into the oven to melt the cheese. 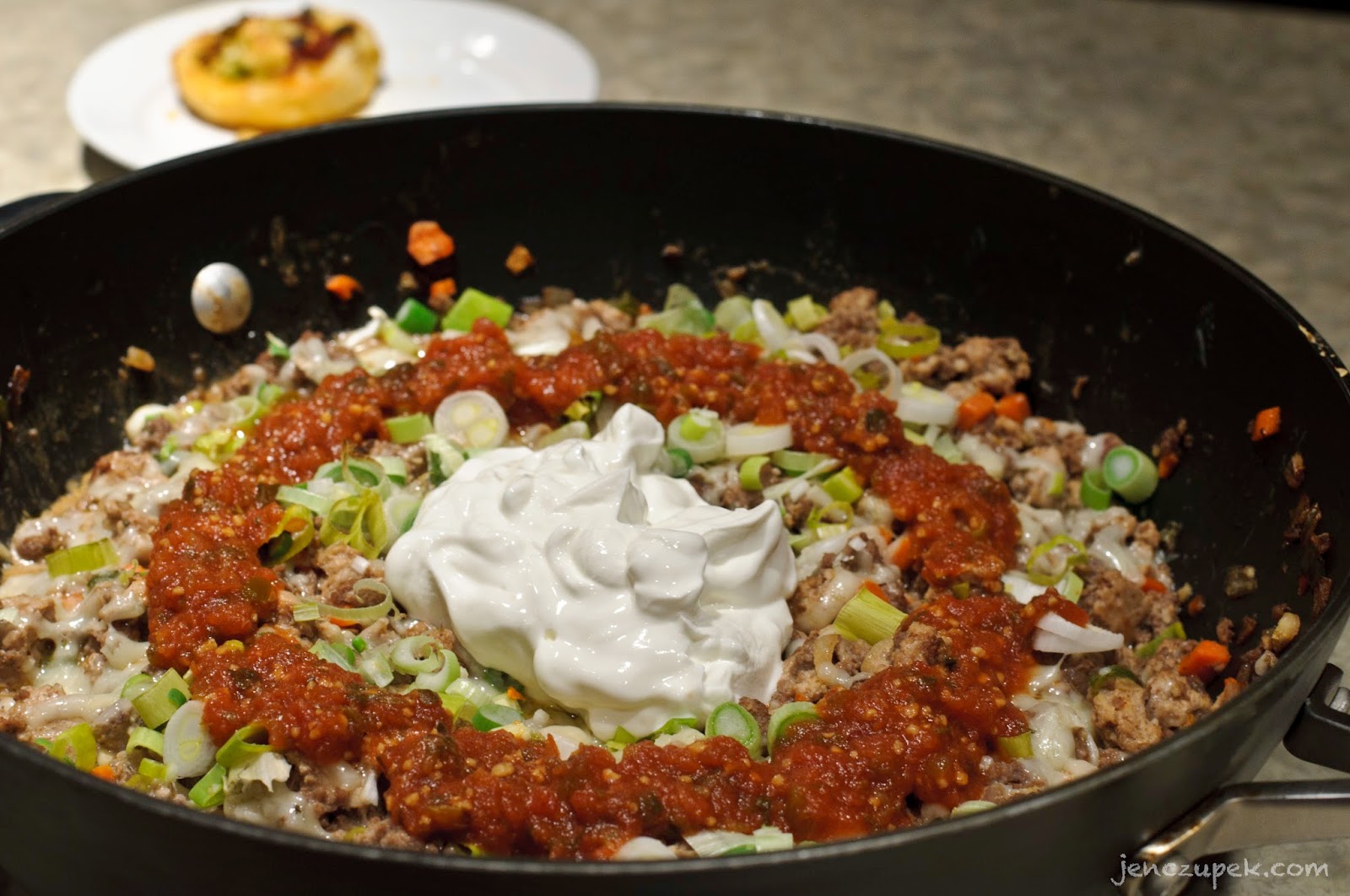 It looked rather blah, and since this was coming to the basement with us as a one-pot meal, I sprinkled some chopped green onions over the top, poured some salsa around in a circle and plopped a dollop of sour cream in the middle.

The corn chips were necessary, as I didn't have any of the bagged stuff in the house. 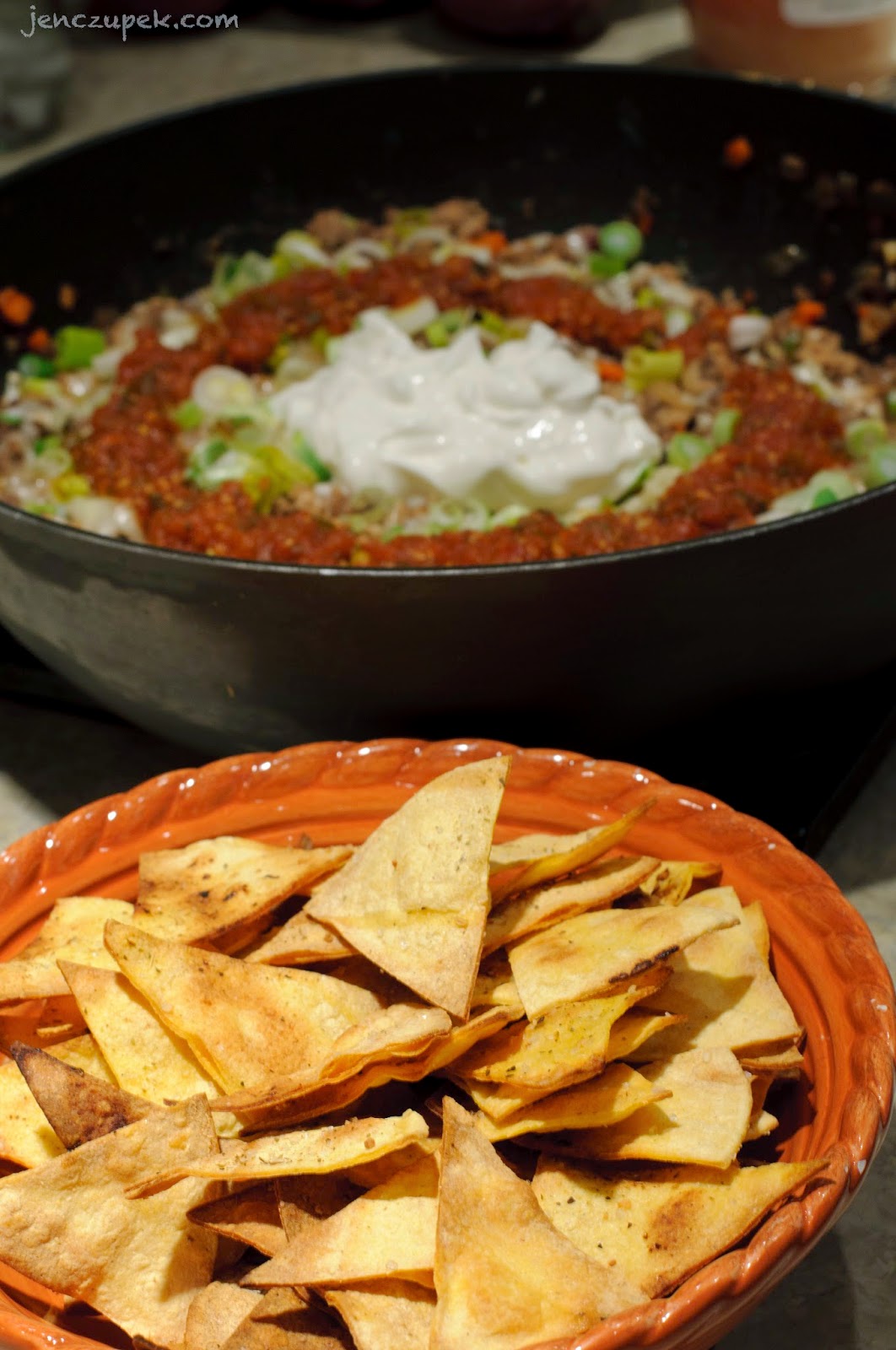 I promise to clean my act up next week.

Or when these teenagers leave my house.