Apéritif Friday - The Lakeside Sipper and a Local Dinner

Last week I talked about creating a "Local Dinner." I came up with the concept after contemplating all the vegetable goodness I've been receiving locally this summer and fall through our CSA baskets, in addition to the grass fed beef and pastured pork from a nearby farm. I knew creating an entire meal out of 100% locally sourced ingredients would be nearly impossible for me, primarily because I enjoy certain dairy products and hello....alcohol. I also knew that I'd need to add some spices and such that aren't produced locally. So perhaps I should call this a "Mostly Local Dinner." Whatever. Semantics.

In short...I wasn't aiming for a miracle, I simply wanted the stars of the show to be locally sourced.

Naturally, I needed to psych up and loosen my limbs with some soothing relaxation. I immediately turned to a cocktail that fit the bill perfectly. Over the summer when my mom requested a Manhattan at the cabin, I was shocked, appalled and embarrassed that we were out of sweet vermouth. How could such a travesty ever occur in the land that defines the Manhattan?

Sacrilege. So I improvised, and created an Apéritif I aptly named the Lakeside Sipper. 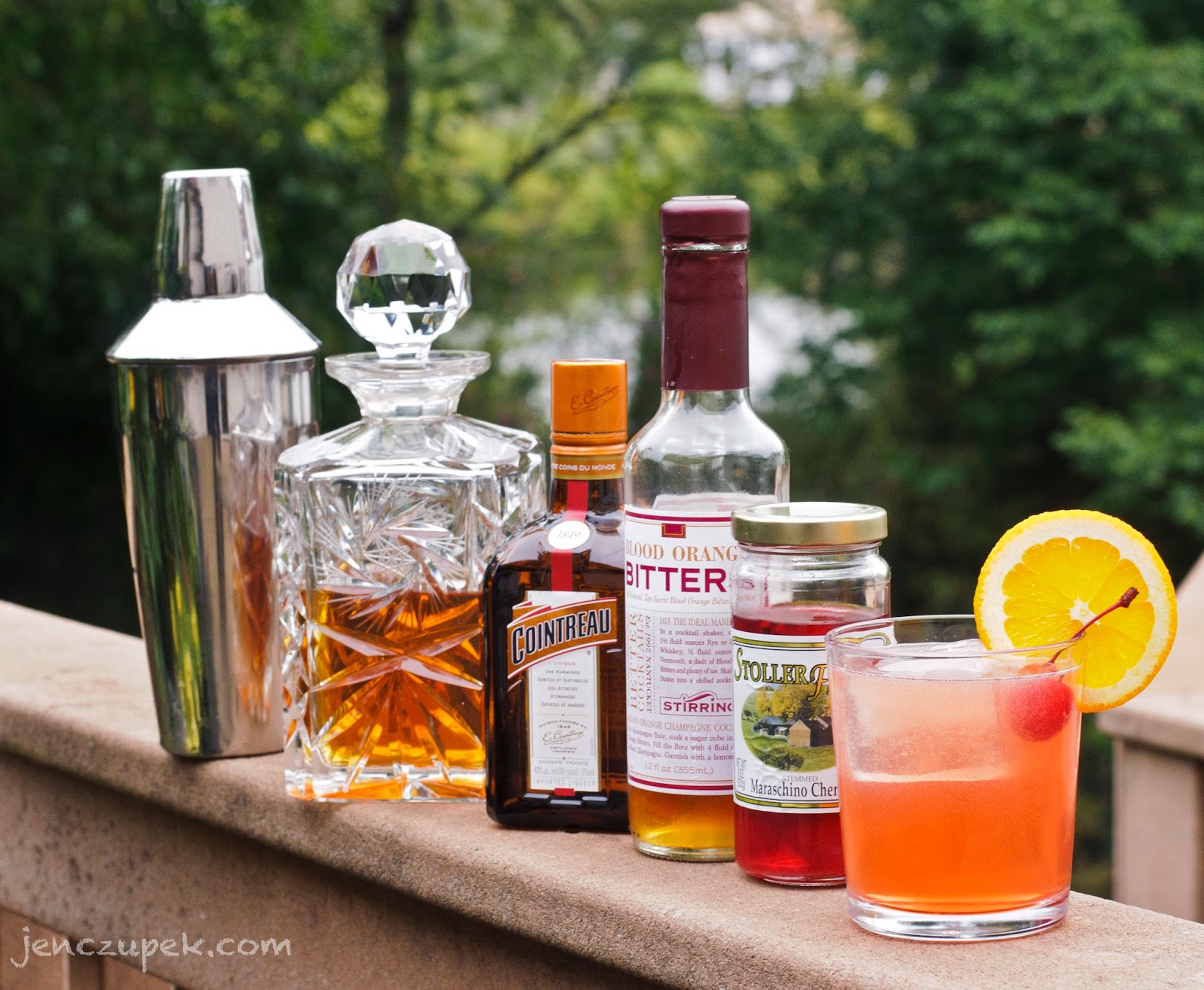 To honor my local efforts, I used Templeton Rye, which is a fantastic whiskey hailing from Templeton, Iowa. Although one of my favorite whiskeys, it is not without some controversy...if you're interested, check it out here. Those darned Chicago lawyers.

So maybe it's not so local. But local in spirit. Heh heh. Punning...

In a cocktail shaker filled with ice, add two parts whiskey and one part Cointreau. (Let's just call France local for the evening. Now I'm really taking liberties!) Add a dash of blood orange bitters and a splash of maraschino cherry juice. Shake vigorously, and pour over a cocktail glass filled with ice. Top off with club soda (optional). Garnish with an orange slice and a cherry.

I'd liken this to a Manhattan, but with a twist. The orange is delicately complex mixed with the whiskey and perhaps tastes slightly sweeter than vermouth, but not cloyingly so. The whiskey still shines through as the star, leaving no doubt that it's a warm-you-up-to-your-toes treat. Mom and I loved this, and deemed it (GASP!) better than the traditional version. We may have even had a second.

With my cocktail in hand, it was time to formulate a game plan.

The family gave thumbs up and rave reviews all around. 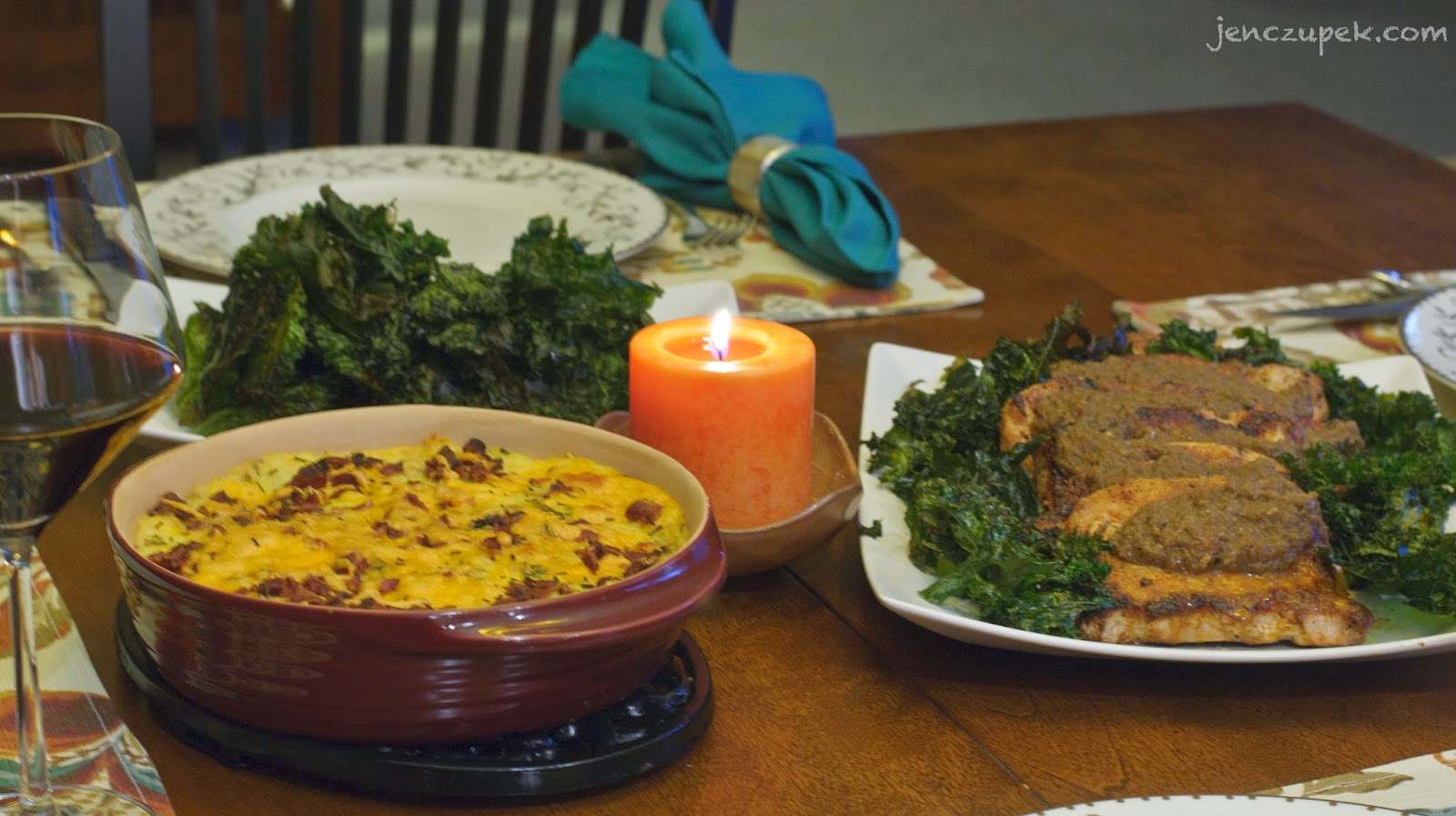 Kale chips are a total cinch. Just wash the leaves of one to two bunches, remove the tough stems and rip them into smaller pieces. THOROUGHLY dry them in a spinner, then on paper towels. The drying is key, or they won't get crispy-crunchy in the oven.

Using your hands, toss them with a couple of tablespoons of avocado oil and sprinkle them with salt and pepper. Spread them out in a single layer on a couple of sheet pans lined with parchment paper and pop them into a 350 degree oven. Roast for 11-13 minutes, watching closely to ensure they don't burn. Remove them, let them cool completely and enjoy immediately or store them in an airtight plastic container.

Unsure of what a Carola potato even was, I had to do a little research. Here's a good description from the Sustainable Table website:

"For mashing, the Carola is fast becoming the gold standard. 'Until someone can show me something that’s better, I think they're the best potato on the planet,' Kiley says. 'The more you do to them the more you screw them up. A little salt and pepper, a little butter, some milk or cream, and you're done.'"

So in keeping with the local, minimalist theme for the night, I scrubbed my one pound of Carolas, left the skins in tact, boiled them until soft, drained them and broke them down with a hand held masher. Lately I'm enjoying the texture of smashed potatoes versus silky smooth mashed. I'm sure I'll eventually pull out my ricer, but for now I'm diggin a few lumps and bumps.

To the smashed potatoes I added salt and pepper to taste, about 1/4 cup of butter and sour cream and 2T of chopped chives from my backyard herb garden. I spread the potato concoction into a ceramic baking dish and topped it with some local, cooked, chopped bacon and a sprinkling of shredded Wisconsin aged cheddar cheese. Into a 350 degree oven they went until the cheese was melted and bubbly.

While the potatoes cooked, I got to work on the pork. One thing I've found with pastured pork is that it is much, much leaner than it's feedlot cousin. So you have to be really careful about babysitting it while it cooks. Due to the lesser fat content, it will dry out quickly if overcooked by just a few degrees.

I made a spice rub for the pork, and liberally rubbed it into the chops several hours before dinner. Here's what I used:

Combine and store in an airtight container.

While the potatoes were on the stovetop to boil, I took the chops out to come up to room temperature. I then added ghee to a cast iron skillet over medium-high heat. When the pan was hot, I added the chops and seared them for about four minutes (or until golden brown), then flipped them and placed them in a 400 degree oven to finish. Again, the key to pastured pork is to use a meat thermometer, and cook them to 150 degrees. Remove the pork from the pan, place it on a serving platter and tent with foil to keep it warm.

Wine time. I leaned on my French friends again. Perhaps I need to visit France to thank them for their hospitality in my local dinner. This wine was positively divine. 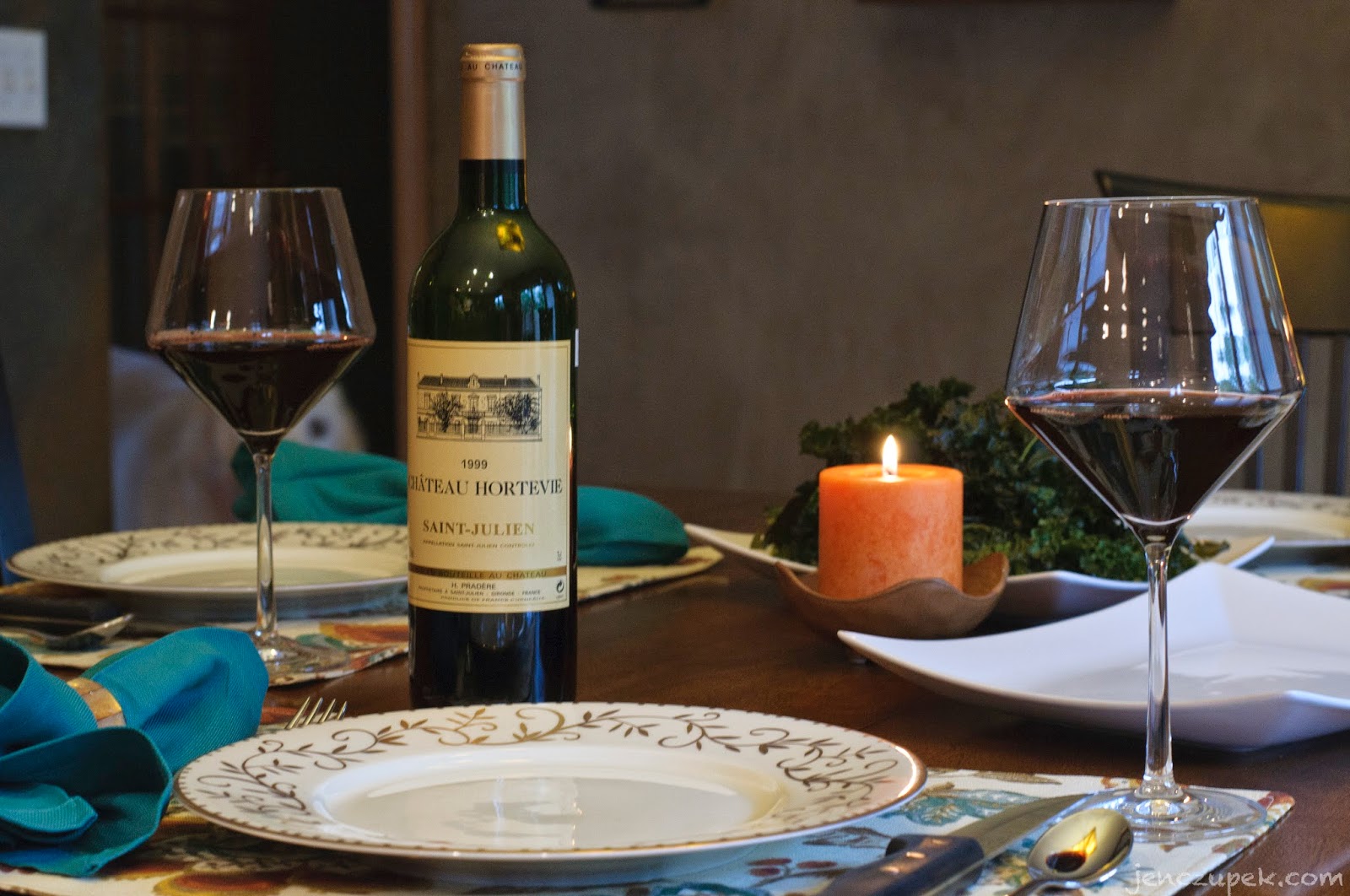 Onto the glaze. Here's how I made it:

Whiskey Maple Apple Glaze
One sweet onion, chopped
One clove garlic, microplaned *I LOVE CSA GARLIC! I never knew that "grocery store" garlic was so bland. This stuff is the bomb. So if you ever see garlic at your farmer's market, go for it. Just confirm that it was locally grown with the farmer. This stuff is potent, spicier and packs so much more flavor than it's counterpart.
1/2 cup whiskey
2T (or to taste) Maple syrup
1/2 honey crisp apple, diced
Cooking fat - I used ghee

Sautee the onions and garlic in ghee in the pork chop pan until translucent. Carefully add the whiskey (you may want to turn down the heat, or turn it off, just to be safe). Turn the heat back up to medium and stir the ingredients together, scraping up any pork chop bits in the pan.  Continue to cook until the alcohol is mostly evaporated. Add a bit more butter to the pan if necessary, then add the apples and maple syrup and continue cooking until the apples are soft. You may use the sauce as is, but if you want it a bit less chunky then puree it carefully in a blender.

Dinner, finally, is served. My people were a little antsy and hungry. 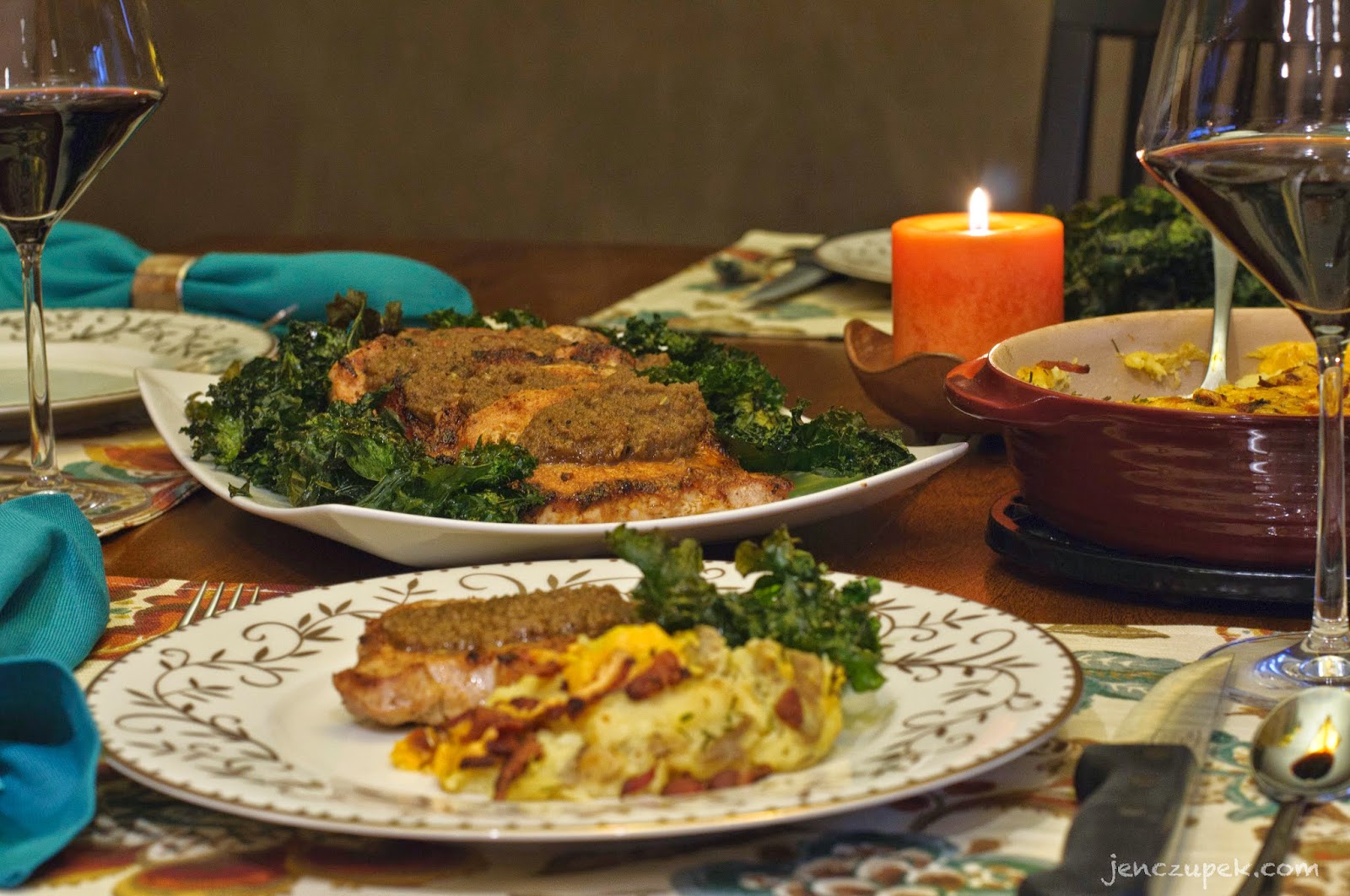 I enjoyed this challenge. The pork was delicious and the glaze enhanced its flavor. The kale chips gave the plate the crunch I was looking for (not to mention the color...how boring would it be with no green?) and the potatoes were creamy and savory next to the sweetness of the pork and glaze. I would definitely make this again, and my family declared they'd devour it again. 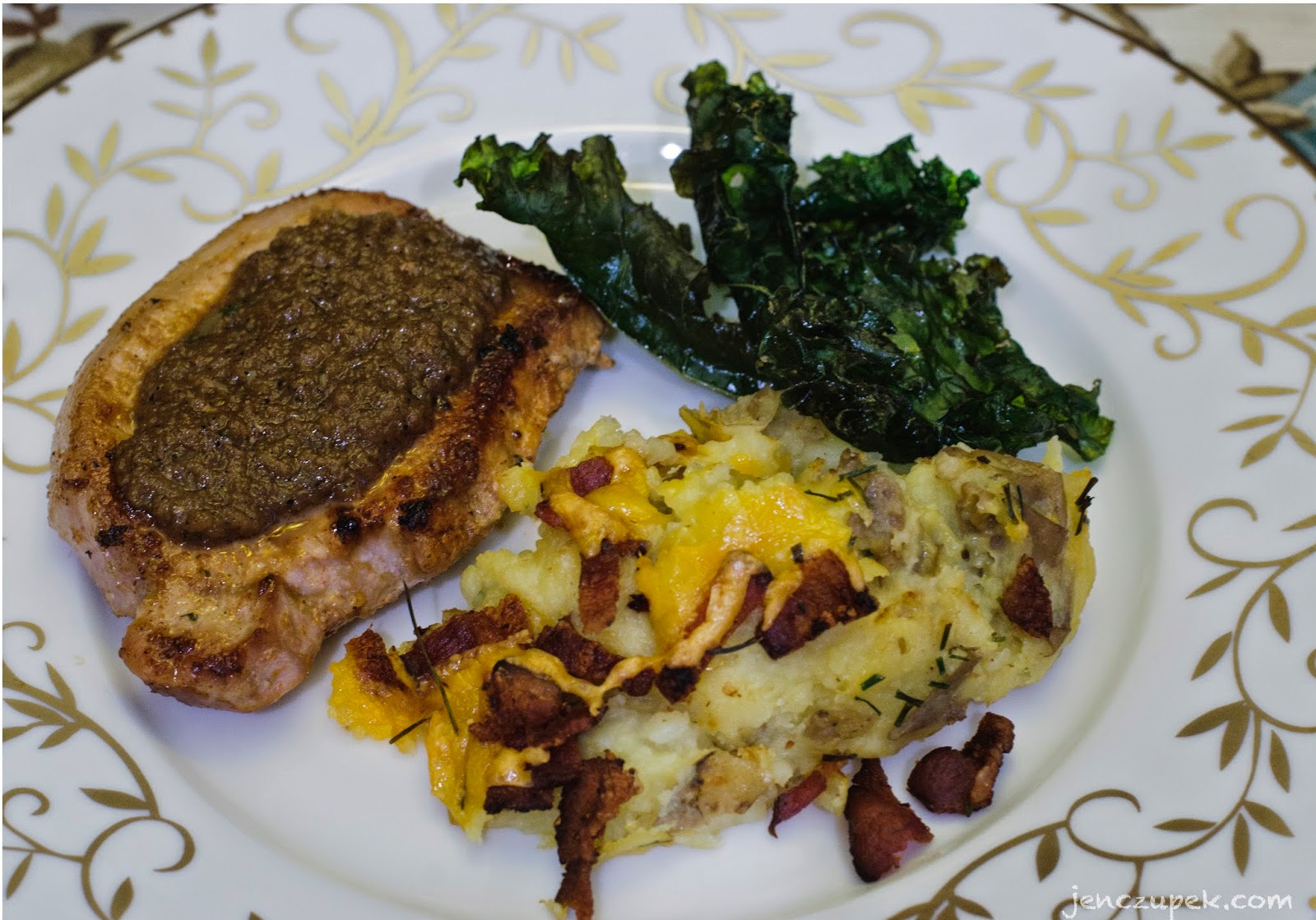 If you're interested in eating more locally, there's scads of information out there. Here are two sites I recommend: Eat Wild, for information on grass fed and pastured animals, including a state-by-state directory of local, sustainable farmers. Another great site is Local Harvest, where you'll find information on local growers, CSAs, Farmer's Markets and certain foods available for sale.

Go Local! It's all the rage!