We've been a little busy around here the past few weeks. Between hockey and horseback riding and daily living, throw an event like Homecoming into the mix and Mr. Musky and I dream about our summer living arrangement. 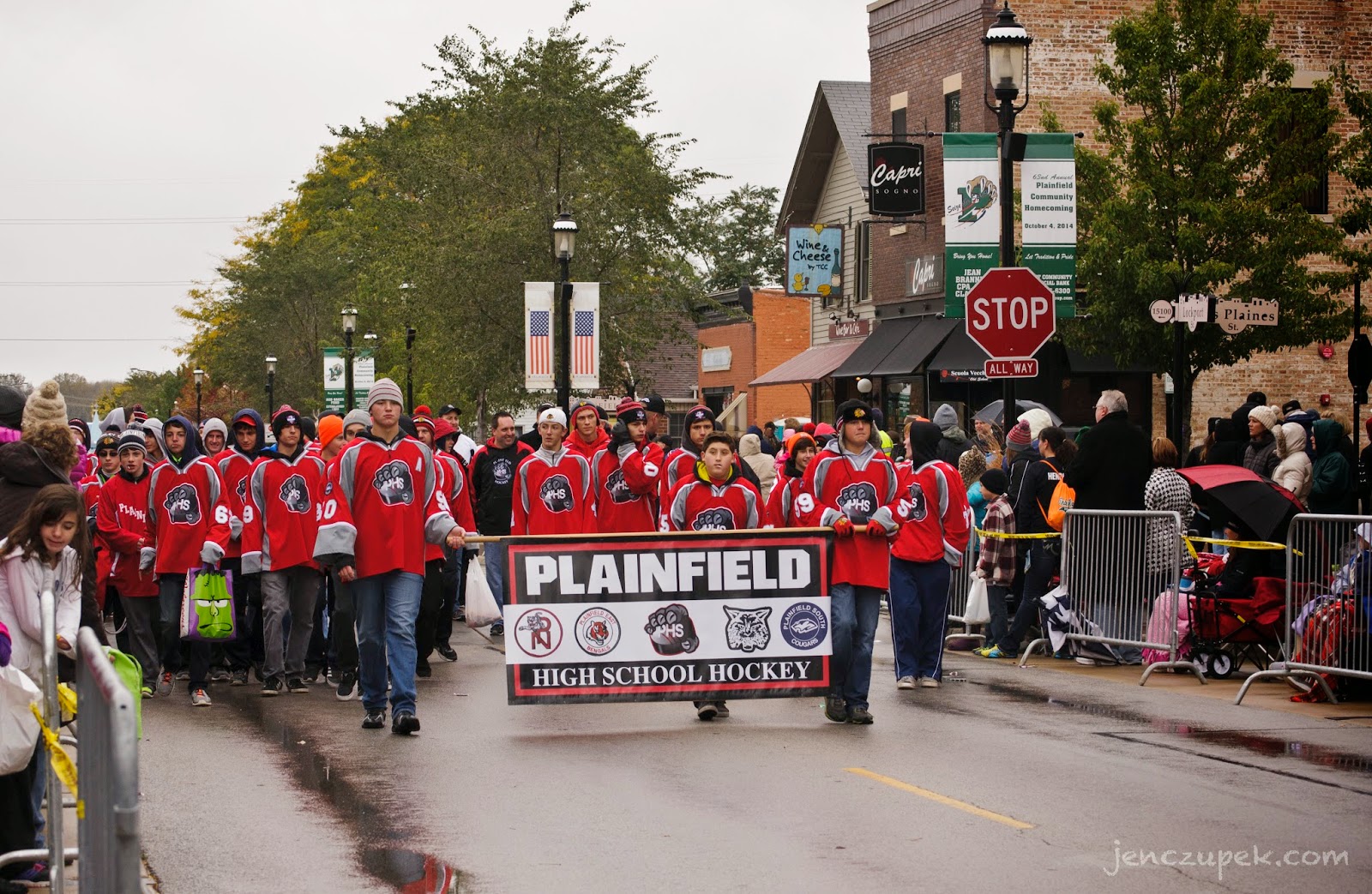 At the same time we embrace all that is fun about having two teenagers in high school. Our punk kid worked the parade like it was his job. He was all business, gently handing that candy out. Not hurling it from floats, like I remember as a kid in high school. Back in the day, our wise elders realized that the hazards of flying sugar bombs beaning snot-nosed elementary school kids in the eye built character. So we hurled away. 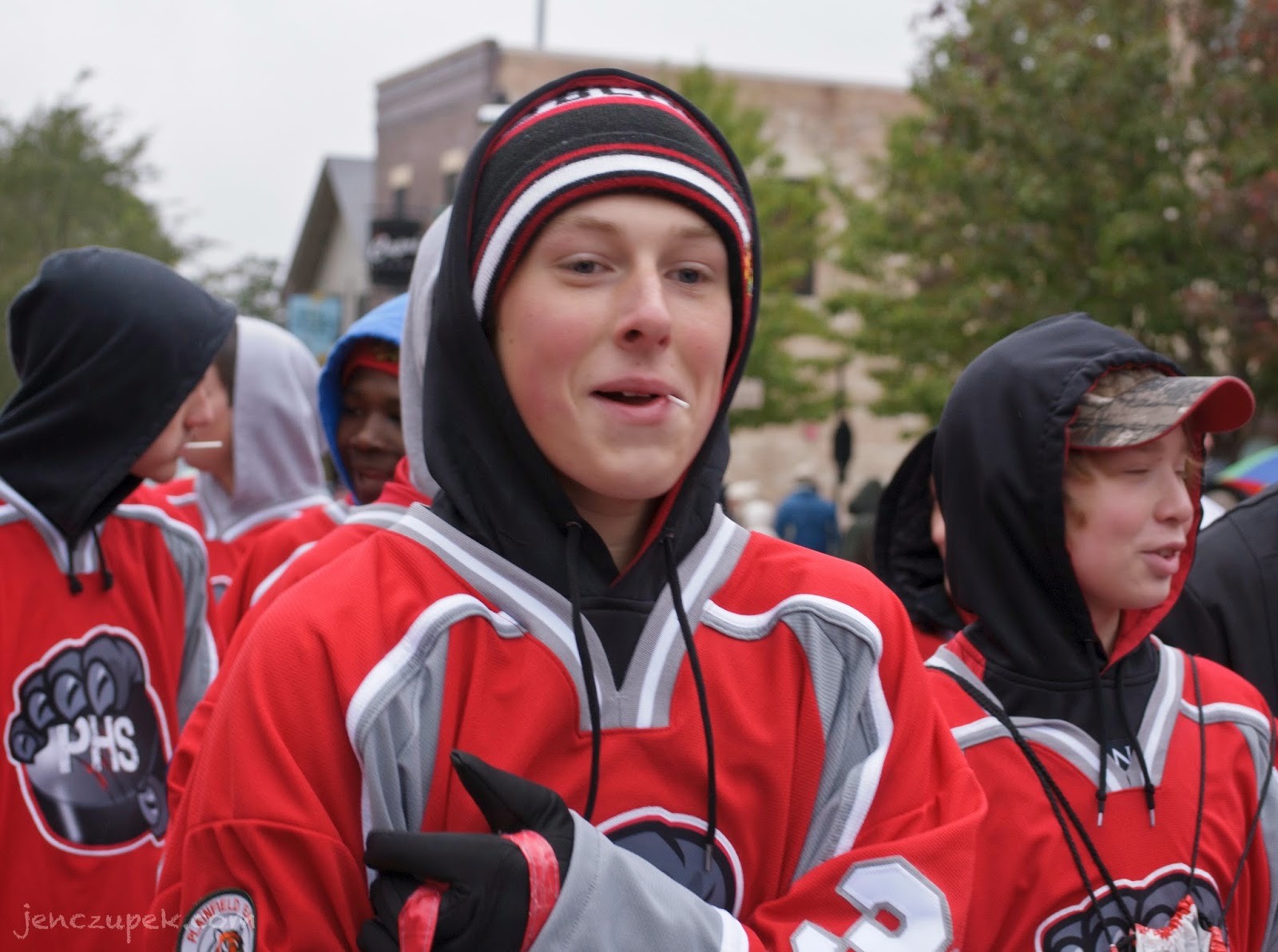 Our little community takes the tradition of homecoming to new levels. The parade has grown exponentially along with our population, and all four high schools now participate with over 100 entries. While the weather didn't really cooperate and a certain someone whined and moaned and groaned all morning long, I still enjoyed watching a mere 1/3 of the parade. Mr. Grumpy Pants commandeered me to leave once the hockey team marched by. Next year we're sticking it out. 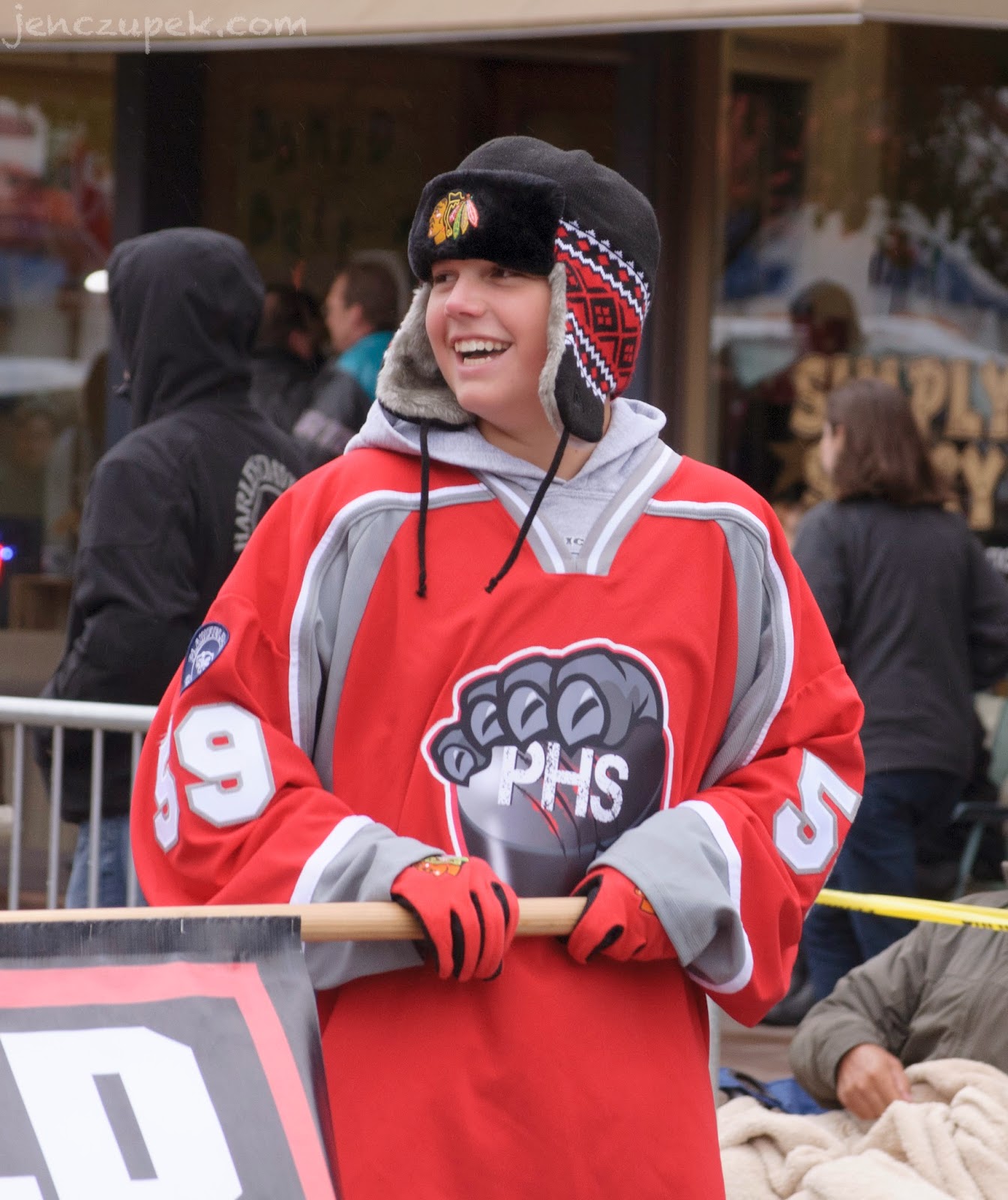 Warms my heart. He's one of Jake's good buddies on the hockey team. I could adopt him, he's so stinkin' cute. And sweet.

The parade kicked off our homecoming week. Wednesday brought us a highly amusing form of viewing entertainment. 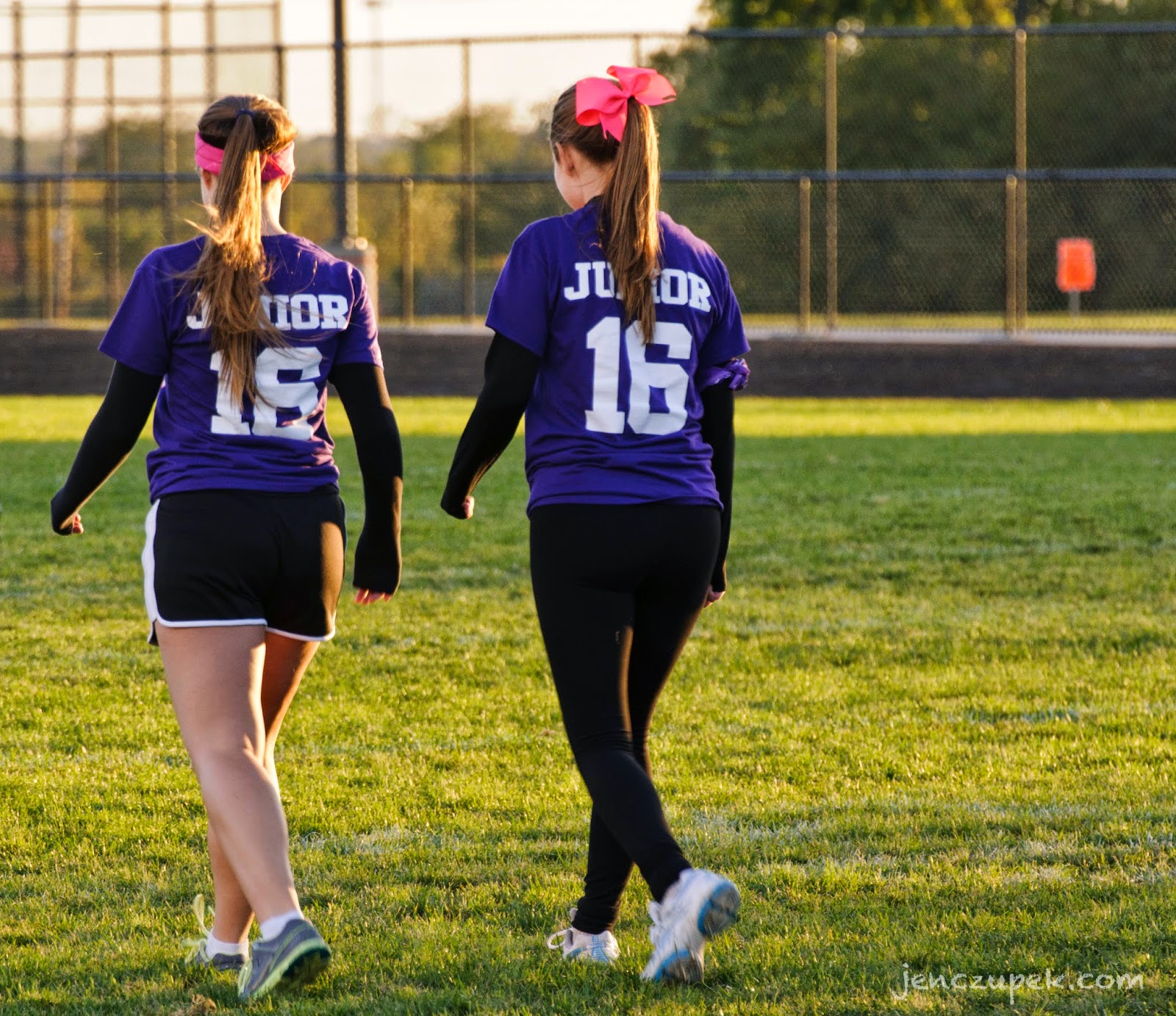 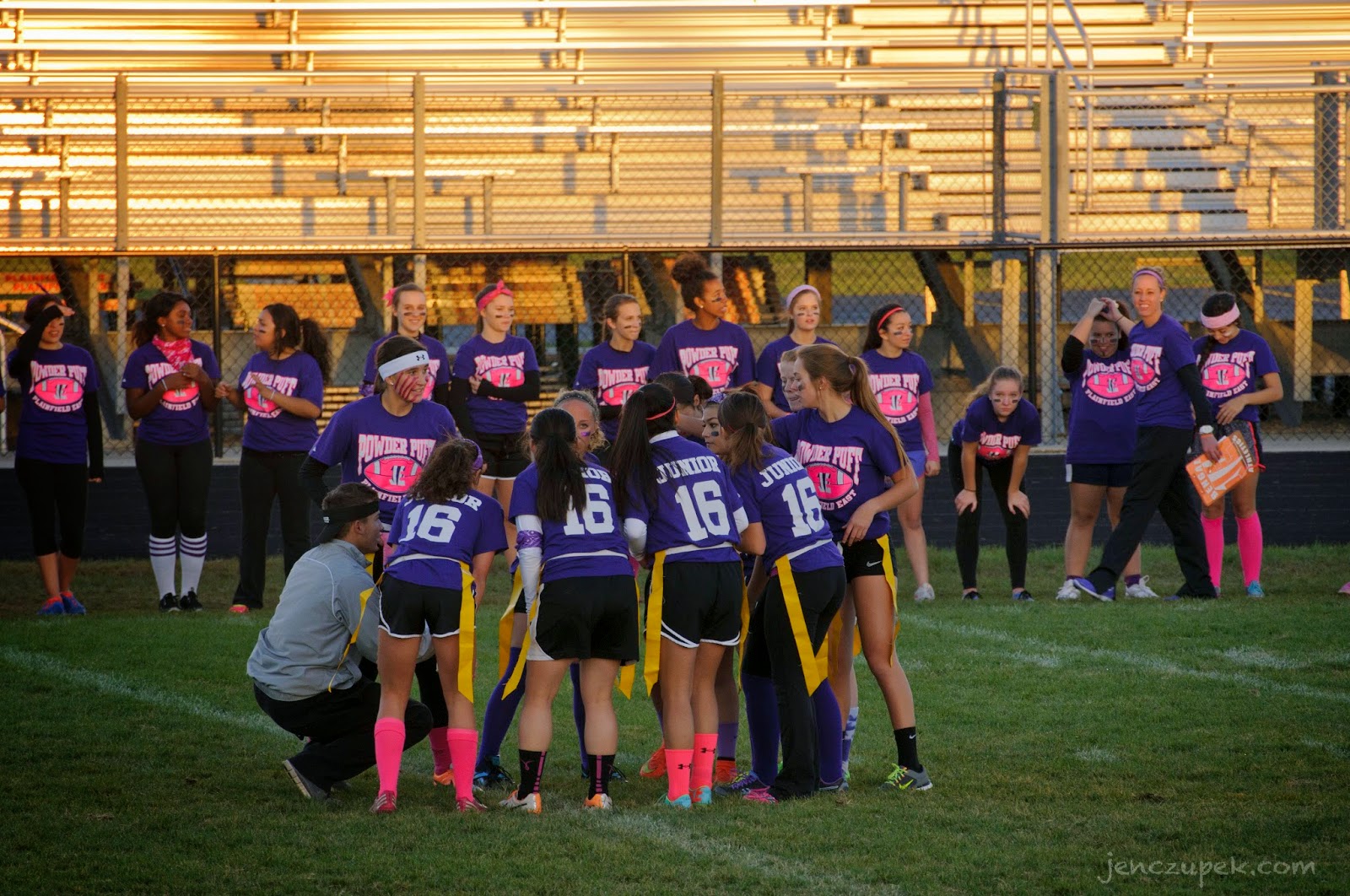 My junior girl and about 100 of her closest friends took on the Vicious Seniors. It was actually a close, and um...interesting game. The seniors eked out a victory, scoring in the final quarter to beat the juniors. And I'm not biased - they played dirty. We saw elbows to the head, hair pulling and eye gouging. Just what my neurotic self needs.

Luckily, based on sheer numbers, my girl and her friends were only in on a couple of plays. 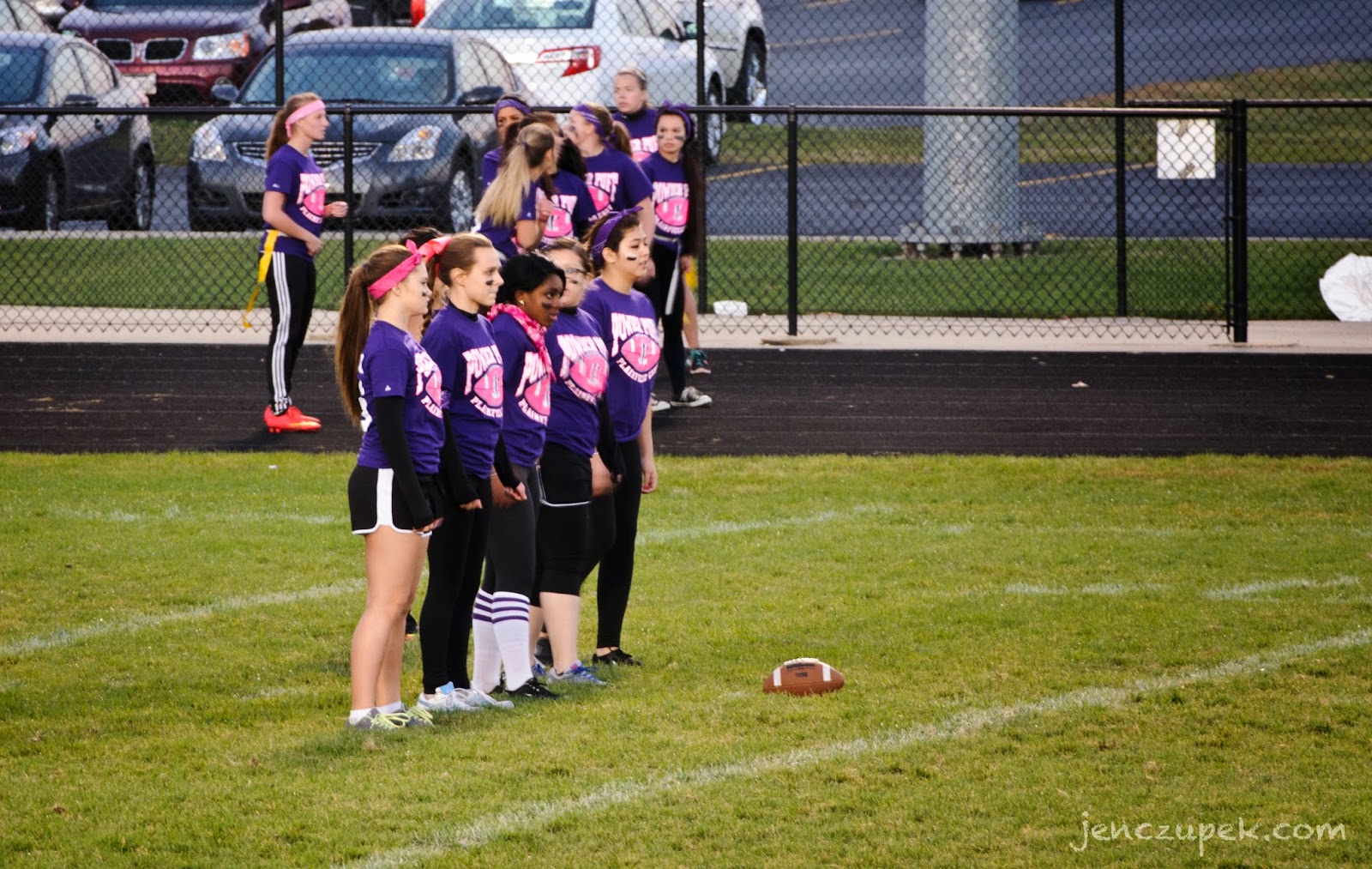 And they didn't land in the hospital.

Watching this game made me grateful I never played Powderpuff football. I conveniently contracted mono my junior year, then moved away, and I don't recall my new high school holding this barbaric event. Or I suddenly came down with a case of measles and miraculously recovered the next day.

These three have been best of buds since elementary school. At one point during her freshman year, I told Kahley that life can be wicked, and to not be surprised if their friendship doesn't stand the test of high school. 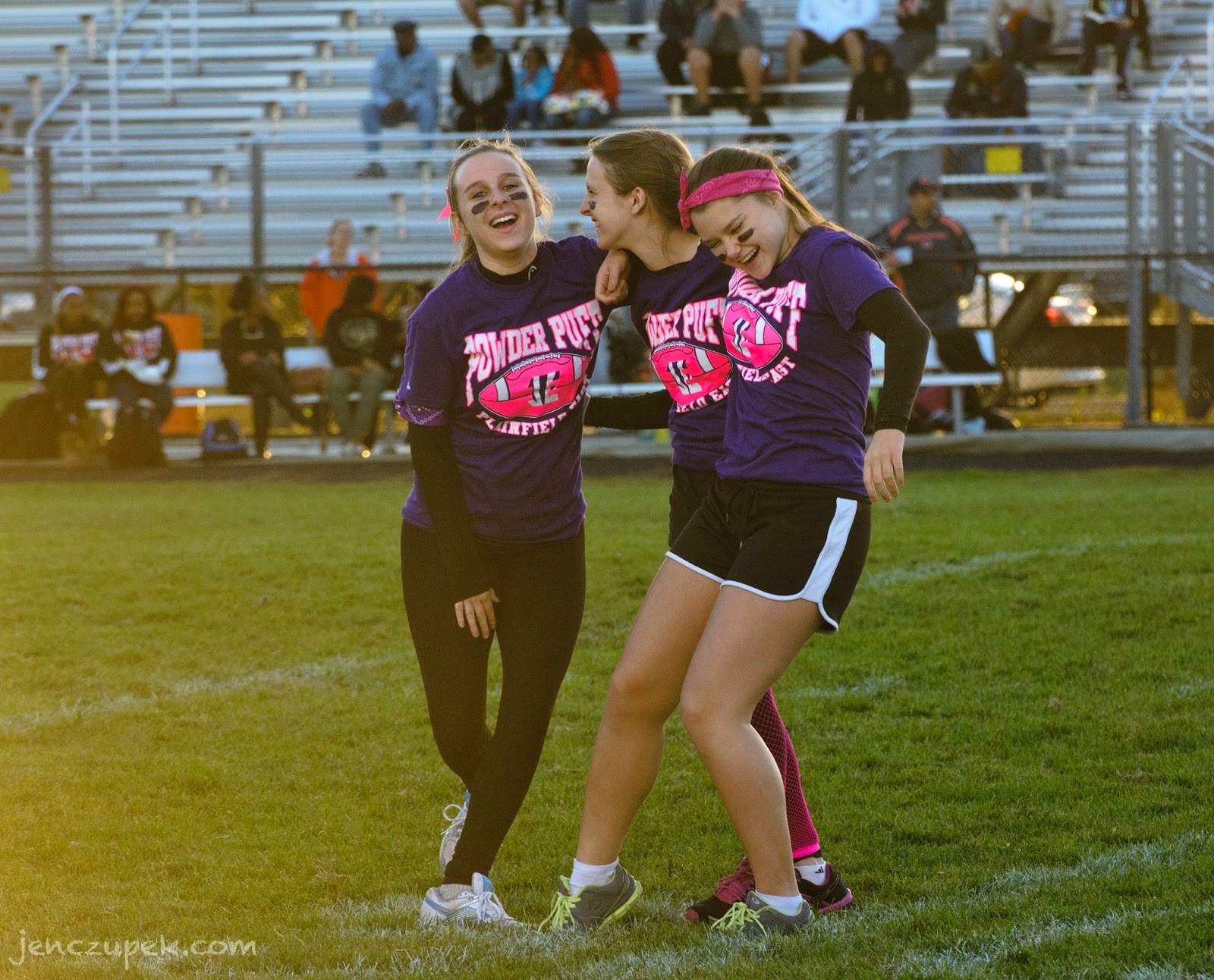 I couldn't be happier to be more wrong on that one. 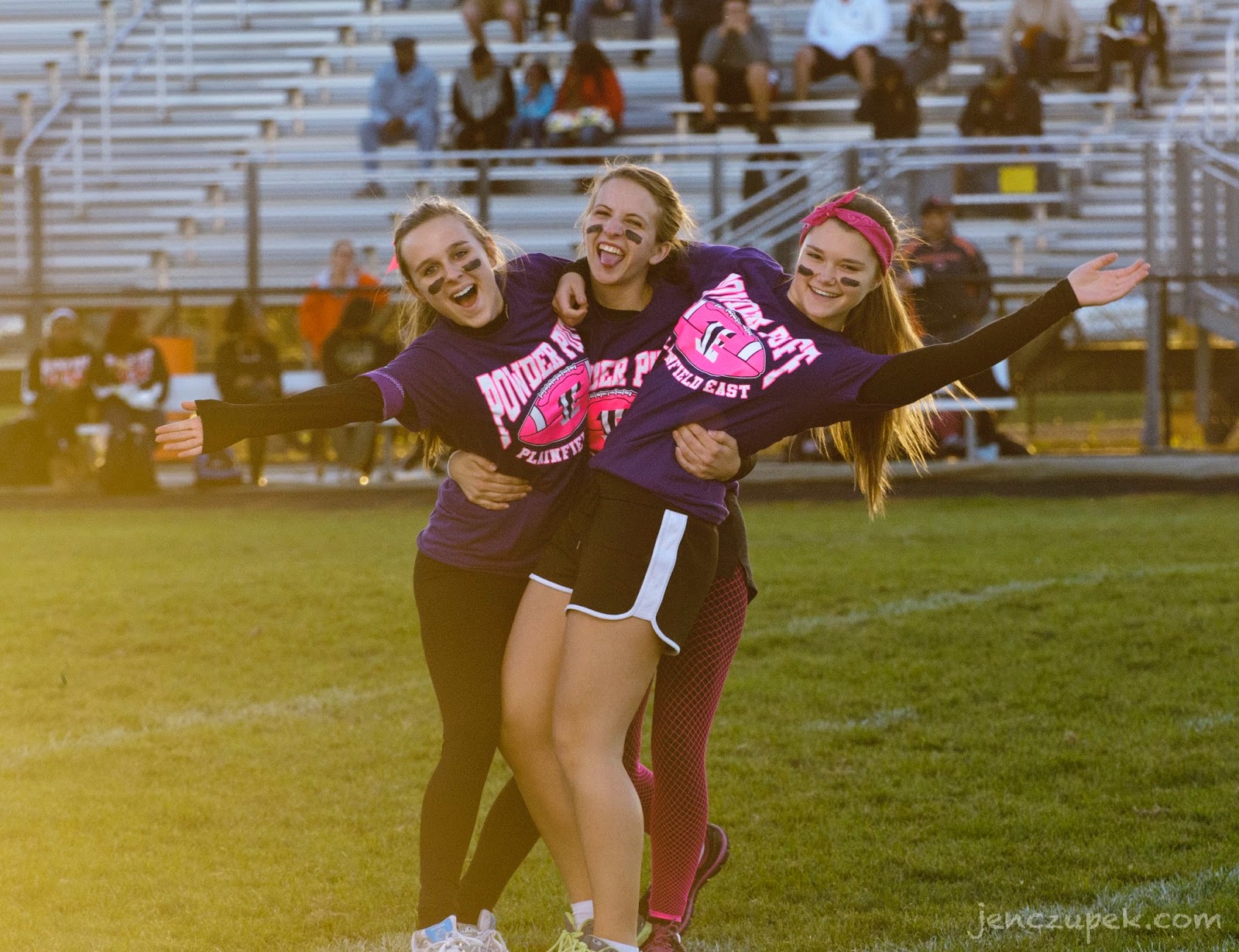 Embracing all that Homecoming offers, even Mr. Musky and I bundled up for Friday Night Lights (we're admittedly not that into high school sports that our kids don't play). East's football team is pretty good this year, and they went up against Oswego to battle it out for first place in the conference. Sadly, East came up short but still has a shot at the playoffs.

Which brings us to...Saturday night, and the big dance. Both kids attended, elevating my planning and logistic skills to new levels. Jake started the night early, heading over to a friend's house for pictures at 4:00.

Kahley wasn't even into her dress yet, so this is all I've got in terms of sibling pictures. 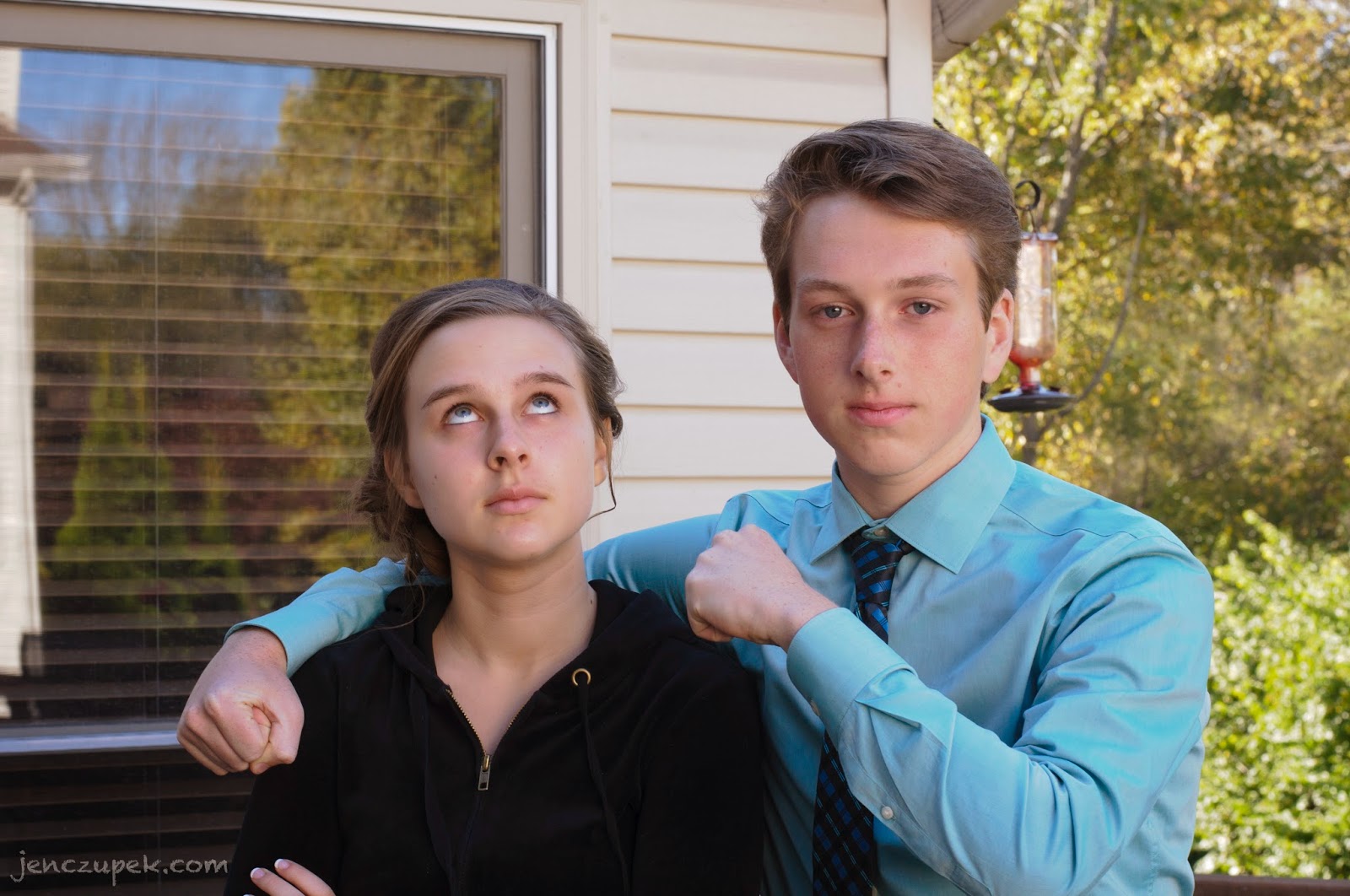 The freshmen decided it was best to all take pictures together...because motivating over 30 adolescents and 40+ parents into position is as easy as herding feral cats. Not. 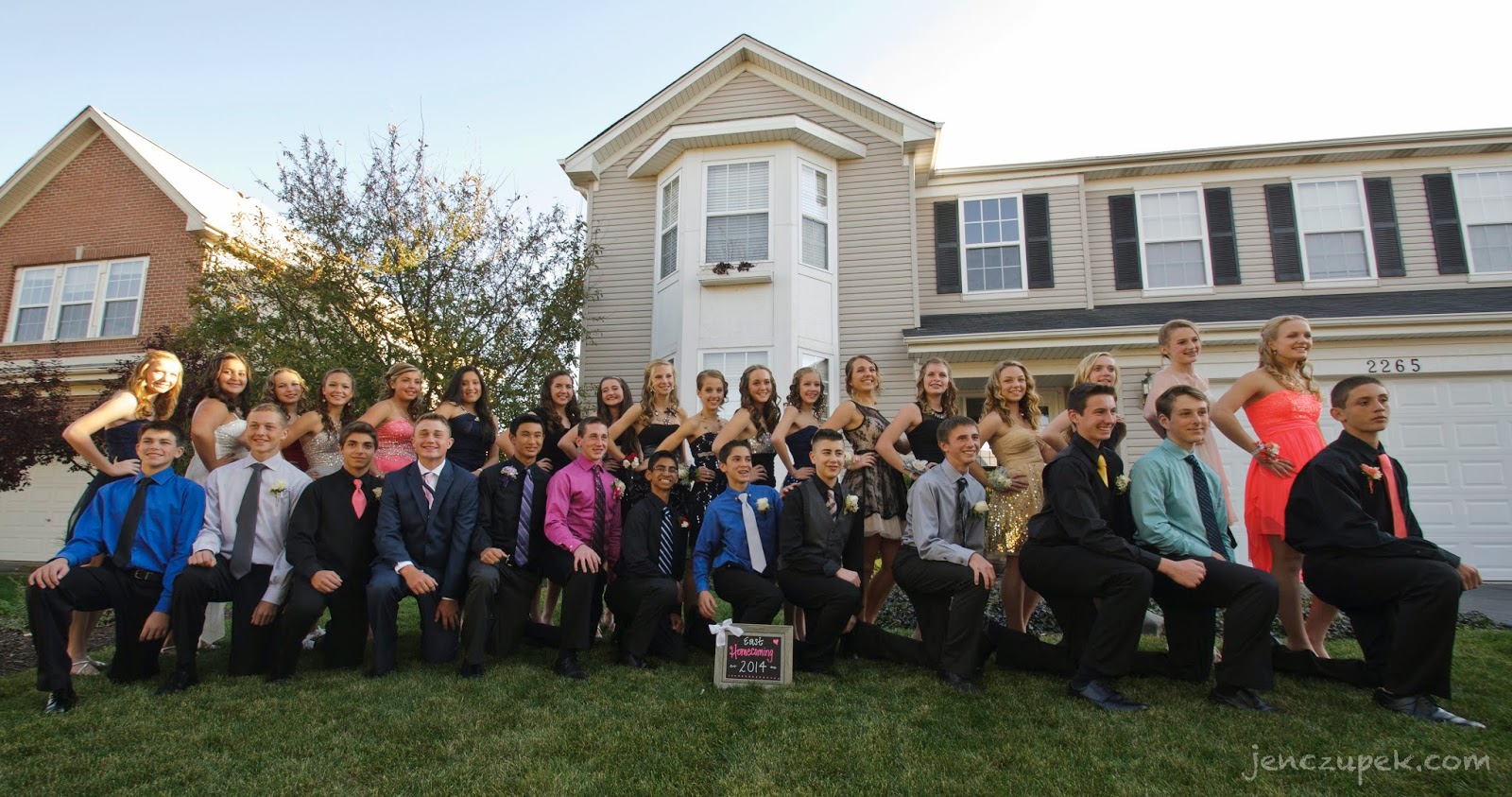 At least it wasn't my house, so I didn't have to holler at all the kids to stand on the staircase or take a knee or be still and smile. 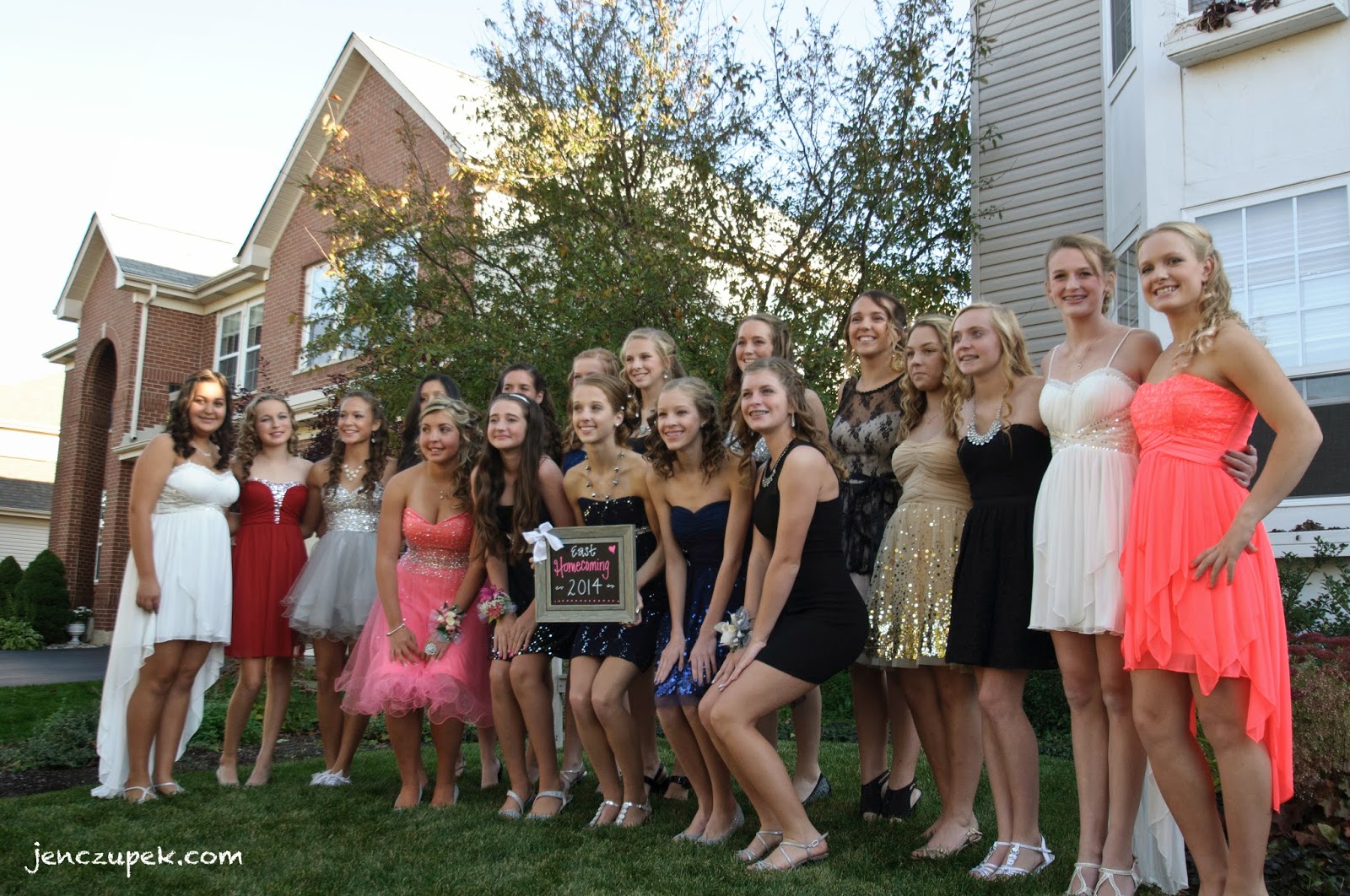 It's a blast to see these kids grow up. They're like little pipsqueaks morphing into adult bodies while their brains attempt to catch up. I hadn't seen the tallest kid of the bunch since last spring. I towered over him in April. Now I barely come up to his shoulder. Remarkable! 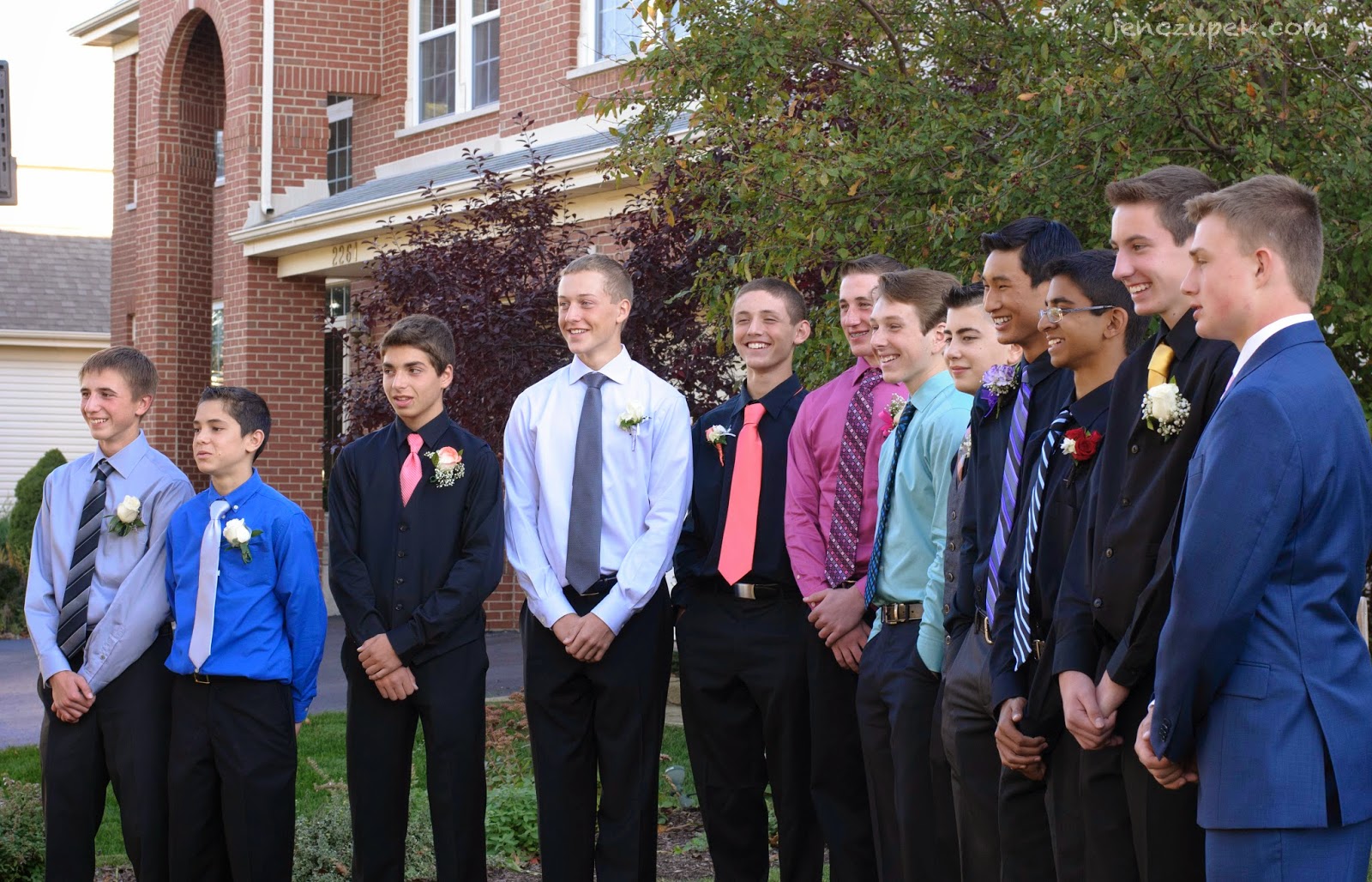 His friend Matt said he wants to be on my blog. Wow - I didn't know I was catching on so well with the younger crowd. Here ya go, buddy. You're officially infamous. 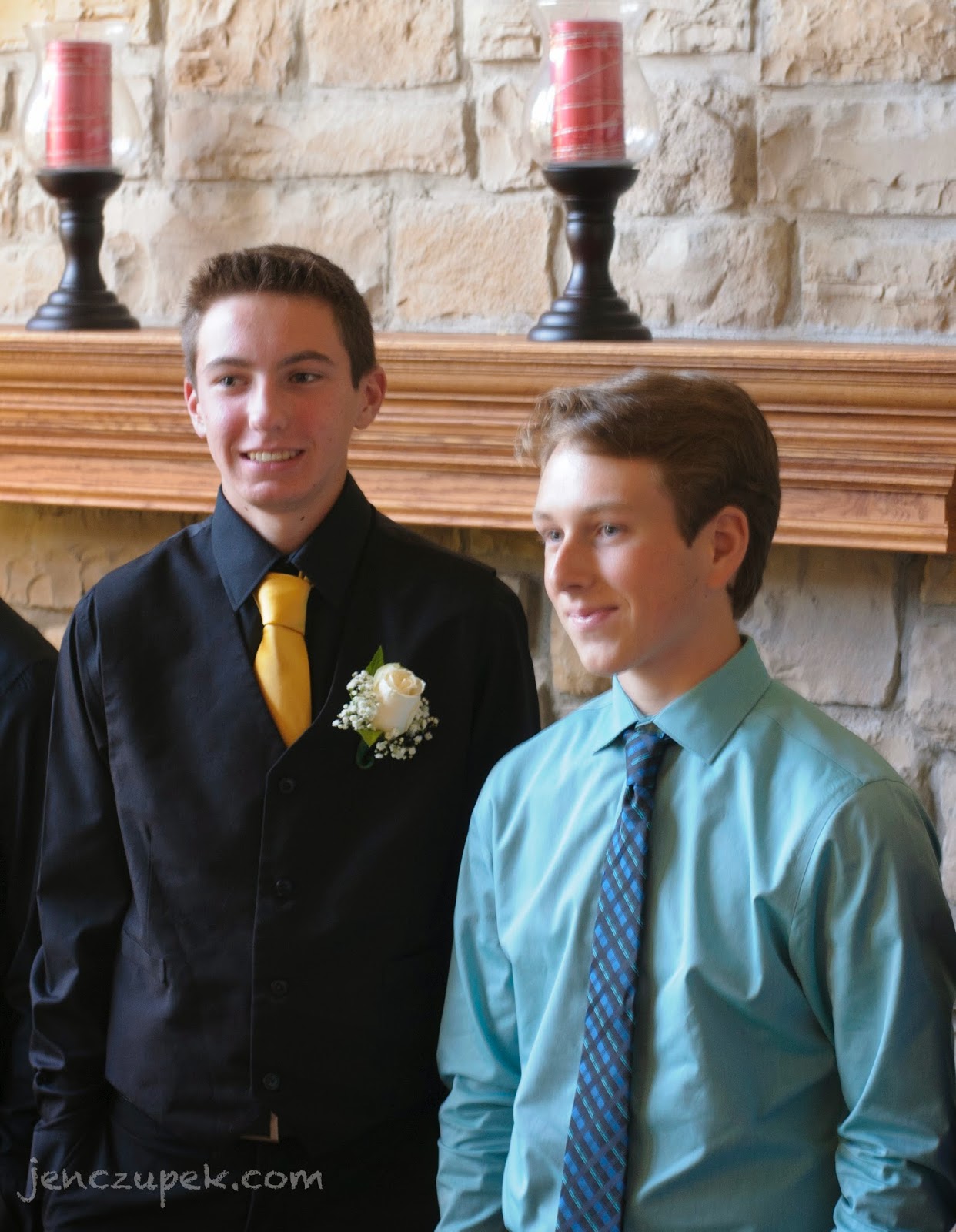 Jake went stag, a brilliant idea. The Asking To The Homecoming Dance has all sorts of pressure associated with it these days. Gone is the convenience of a ratty piece of spiral notebook paper intricately wrapped into a triangular table-top football bearing this heartfelt sentiment scrawled in pencil within:

"Will you go to Homecoming with me? Circle: Yes No."

Now boys must "creatively" ask a girl to the dance. At a minimum, they must procure a giant poster board and dump glue and glitter on it leaving a trail of tears for the mother. The mother who must wake up in the wee hours of the morning to drive him to school so he can humiliate himself in front of all his friends while carrying balloons and flowers and teddy bears as he wears a Santa suit and asks "Will you go to Ho Ho Homecoming with me?"

Barf. It's ridiculous, I tell ya. Just pick up the darned phone and ask the girl out already.

Instead, Jake declared a no-go on the date and got a soda during the one slow song they played. He danced with his friends to Iggy I-G-G-Y and rapped alongside Nicki Minaj to the modern-day version of "Baby Got Back." And he behaved like a monkey at the restaurant because he didn't have a date to impress.

I was grateful because glitter won't line my floor for three months and I didn't have to shell out 25 bucks for a wrist corsage that is ditched at dinner because it's a pain in the ass to eat with flower petals falling into your food.

Taylor is one of his best friends. Whenever I ask, "Who are you texting?" 95% of the time it's Taylor. 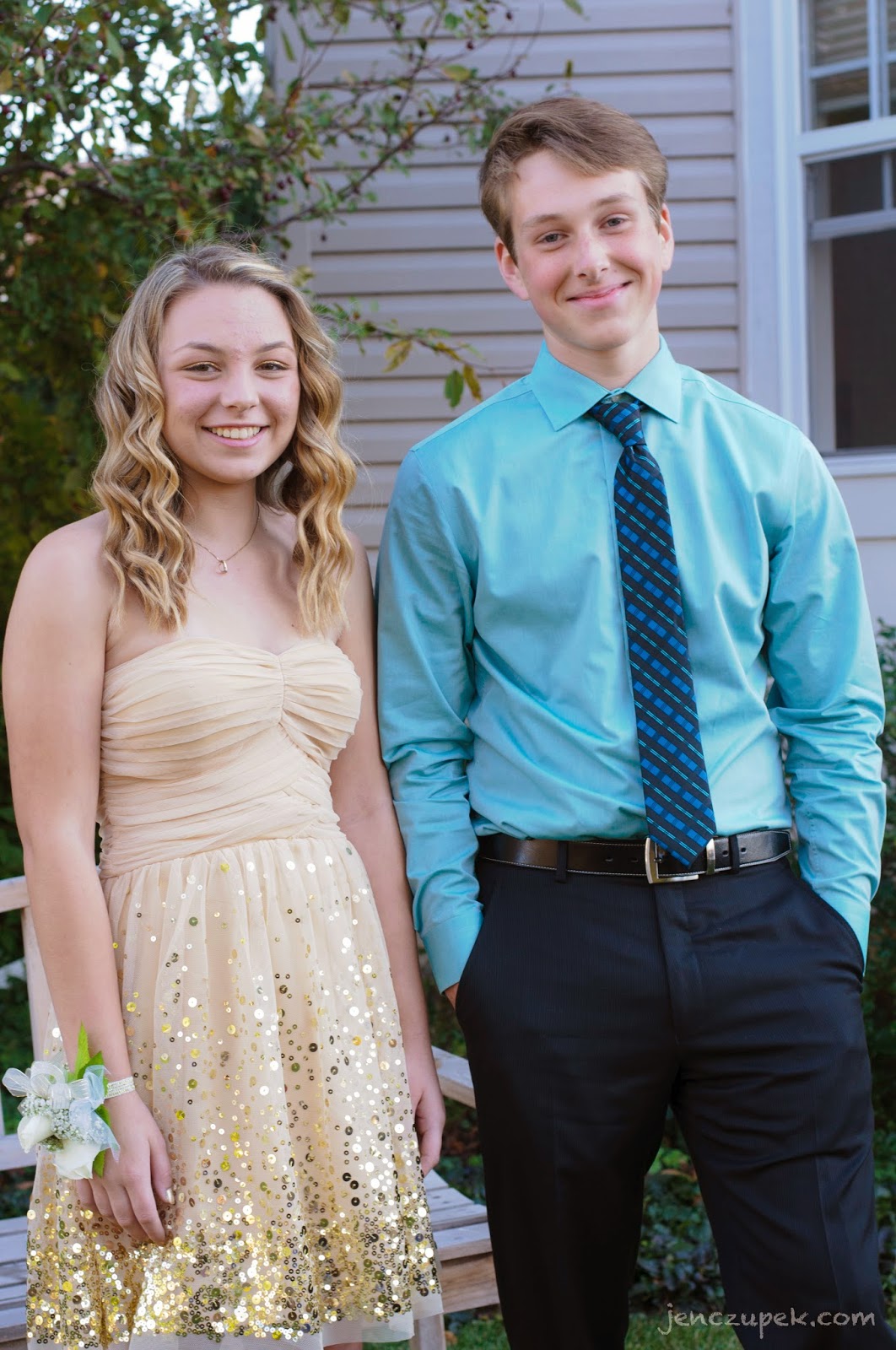 I guess this is their too cool pose. I don't know. I'm old. 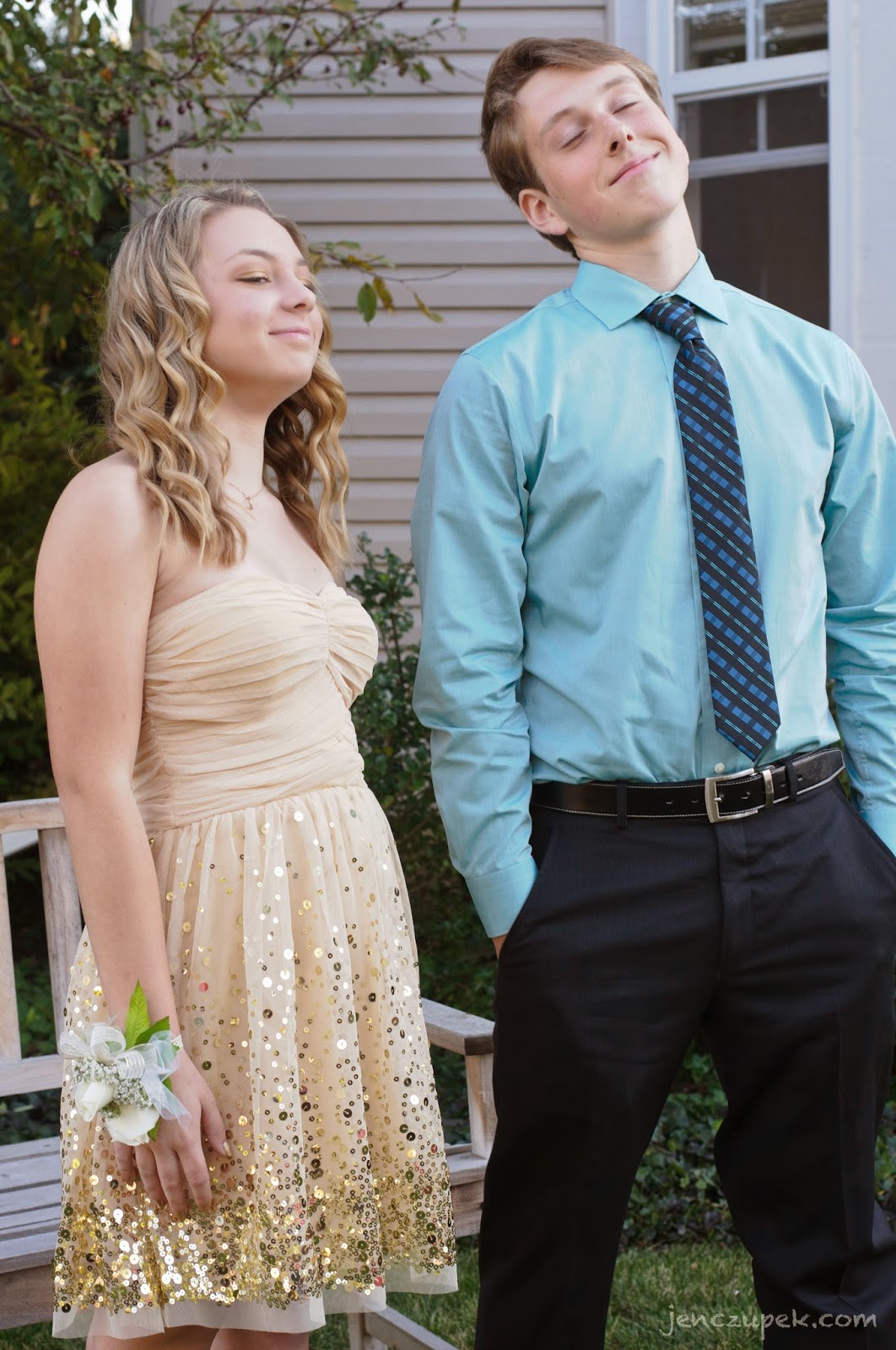 I introduced myself to a couple of mothers and found some gems who would drive him to the restaurant and then to the dance, and then from the dance to an after party. I held a quick conversation in my head, justifying that I wasn't sending my kid off with strangers and it was completely safe for him to get in the car with people I just met 30 seconds ago, so I dashed off to get things in order for Kahley and her friends.

When she came downstairs, I had to take a little step back. 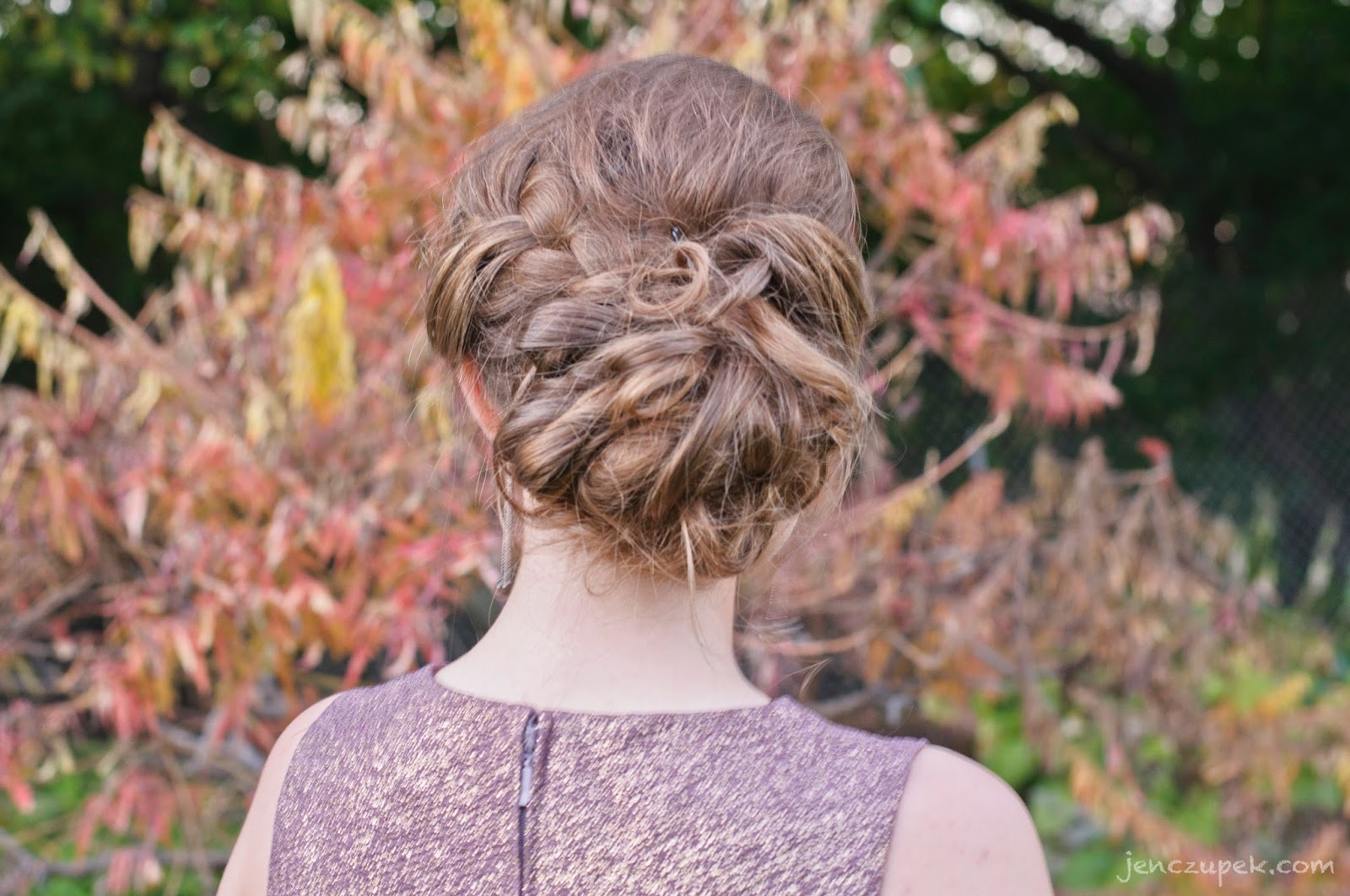 I already knew her hair looked awesome, but I have to admit, the whole package this year put a little hitch in my breath. 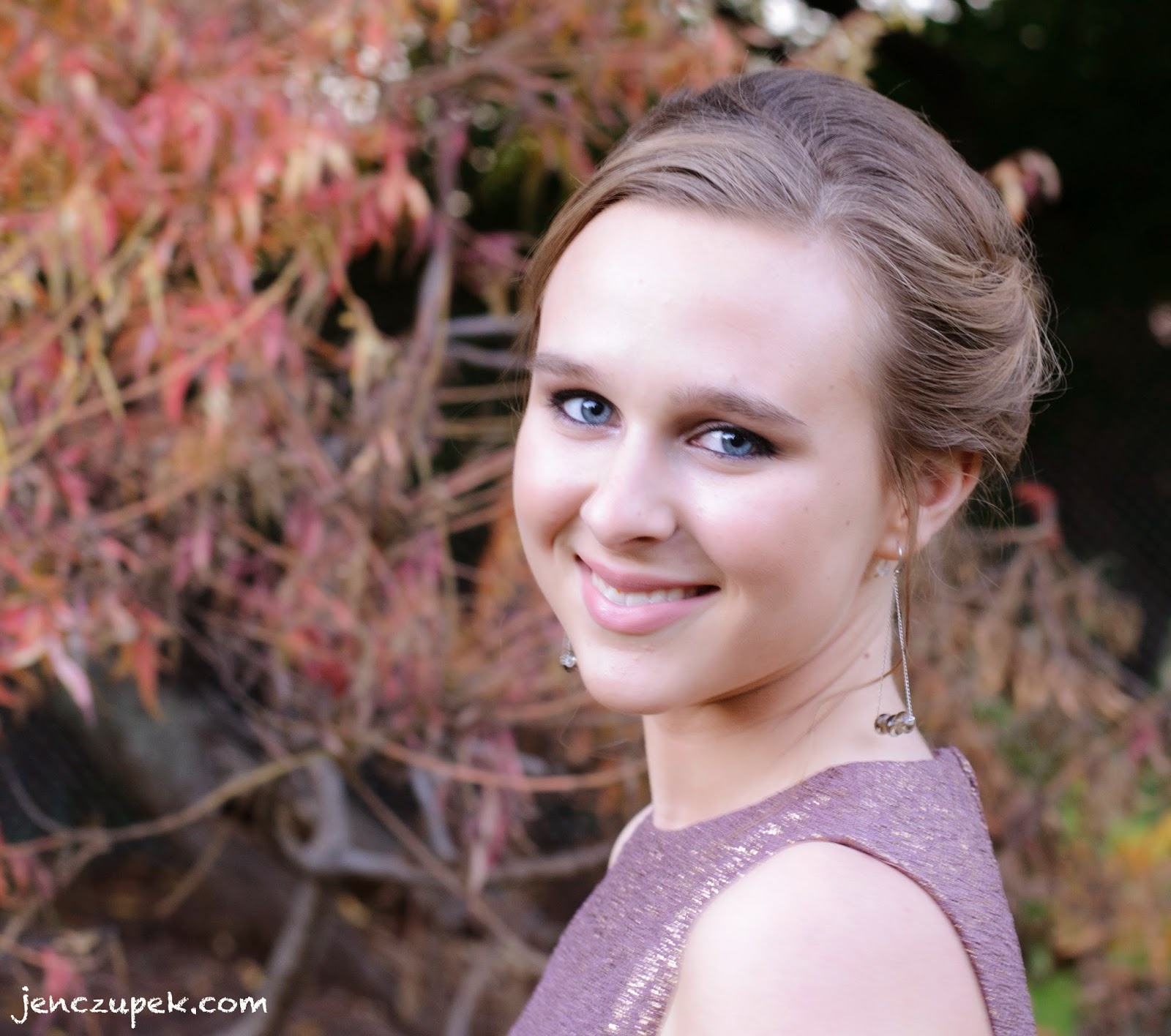 She looked so adult-like. Not pretty, but beautiful. Stunning. And in her case, the brain is catching up quickly.

As are her friends' brains. 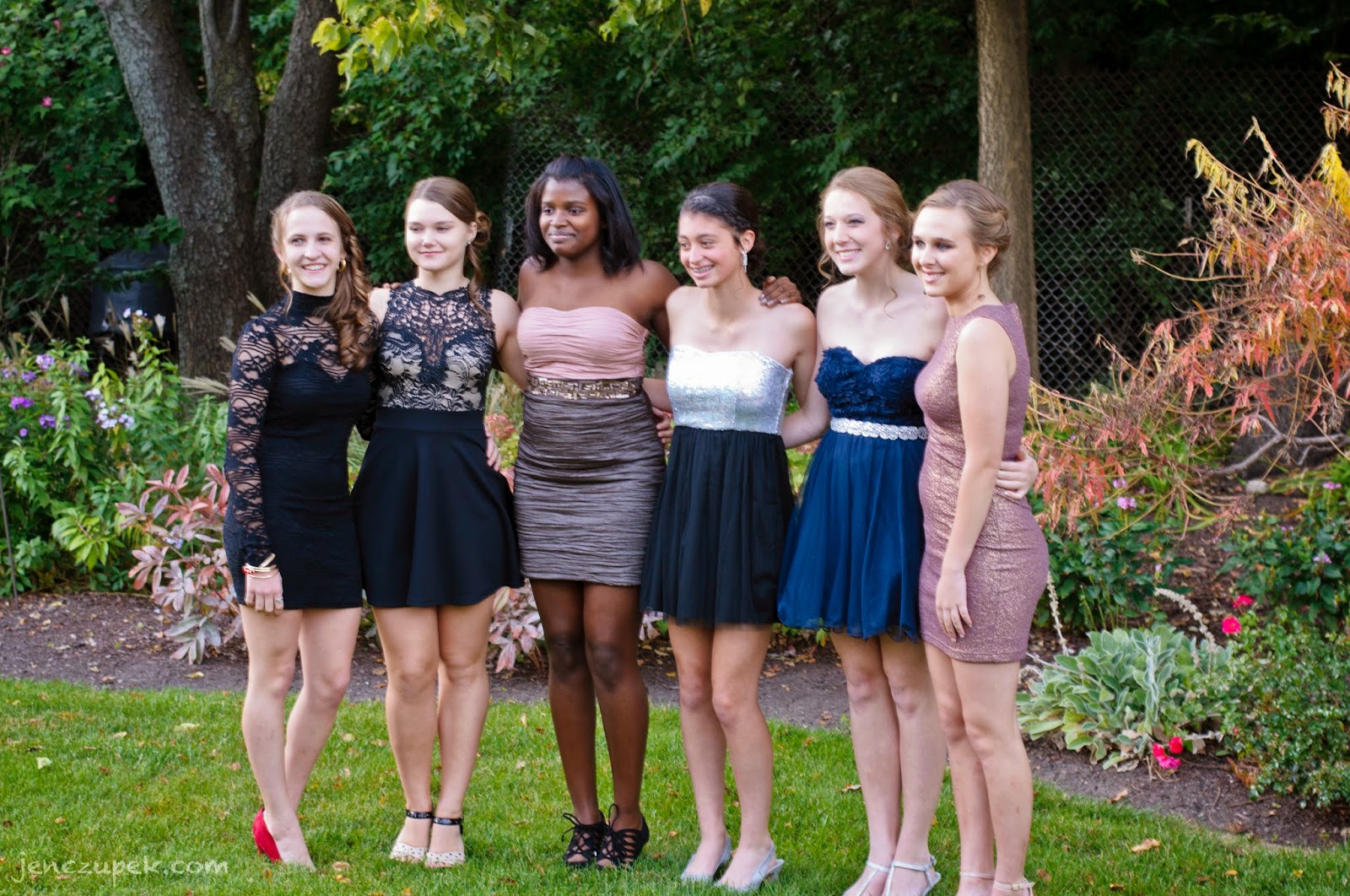 It is so fun to see your kids and their friends grow up into (usually) mature mini adults. 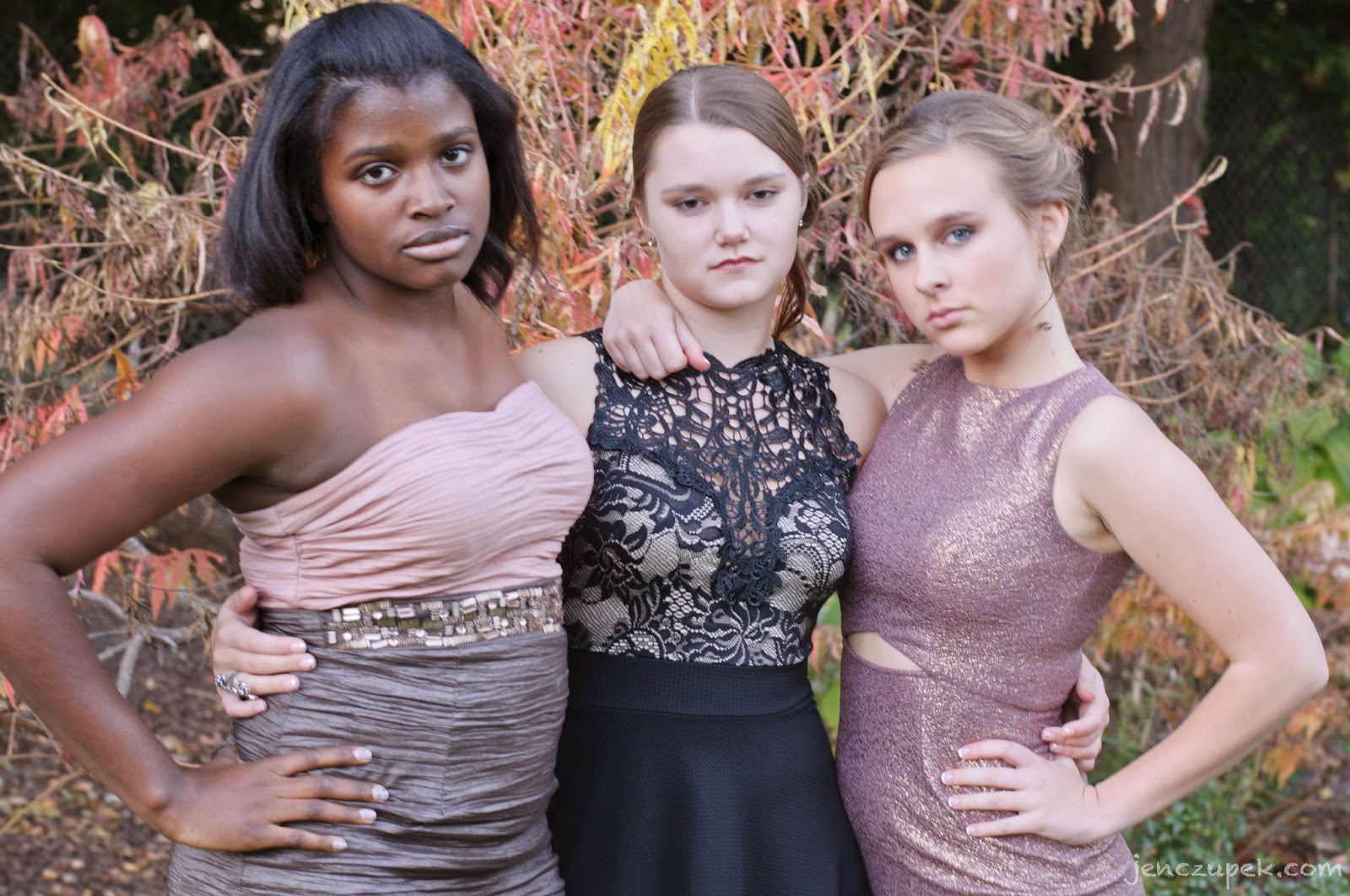 And what's truly remarkable? Nothing broke in my house. Not one cup, glass, dish...nothing. 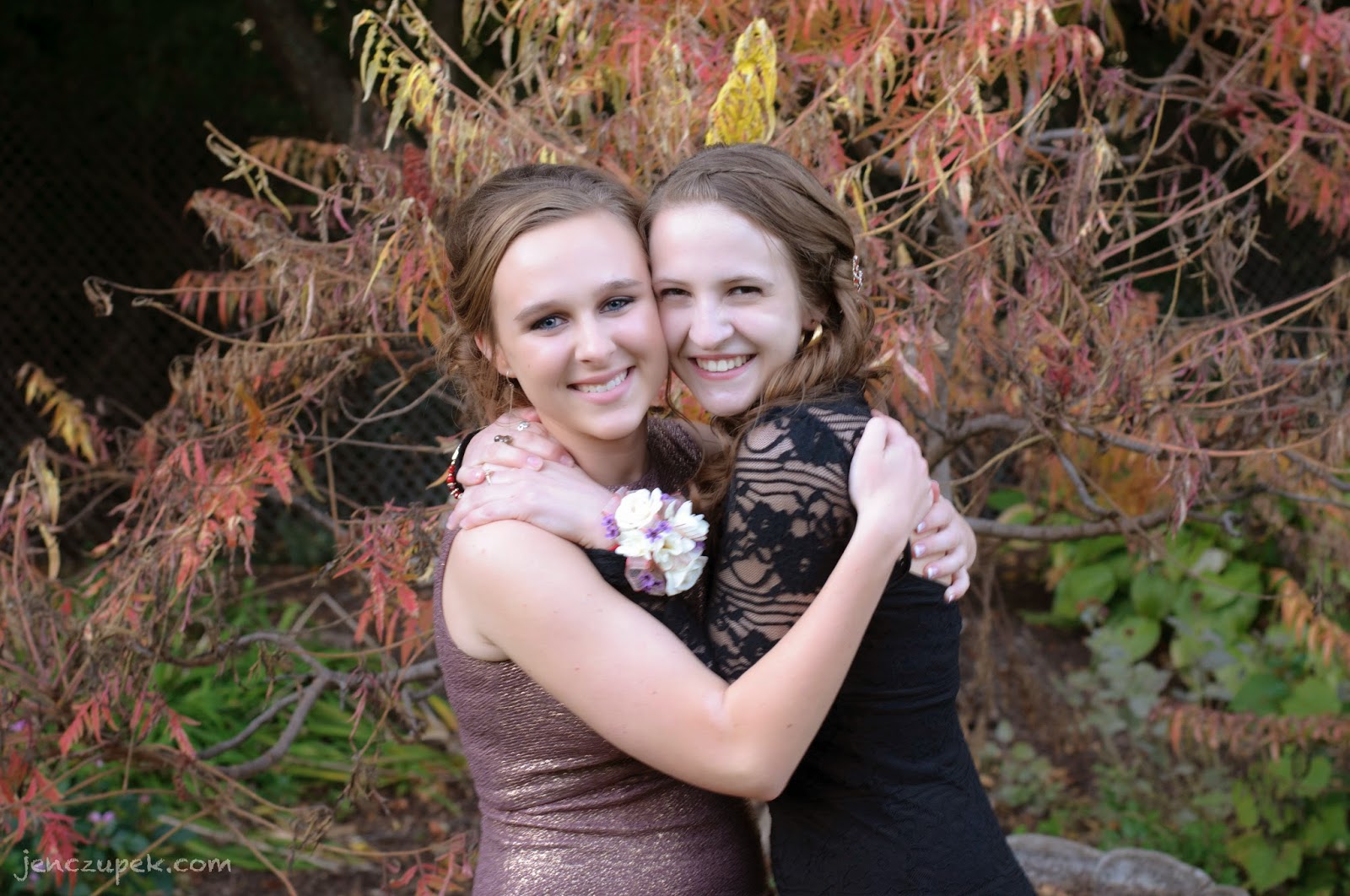 But they still haven't learned it all yet. If a dress has to constantly be pulled down, maybe there's a better option? 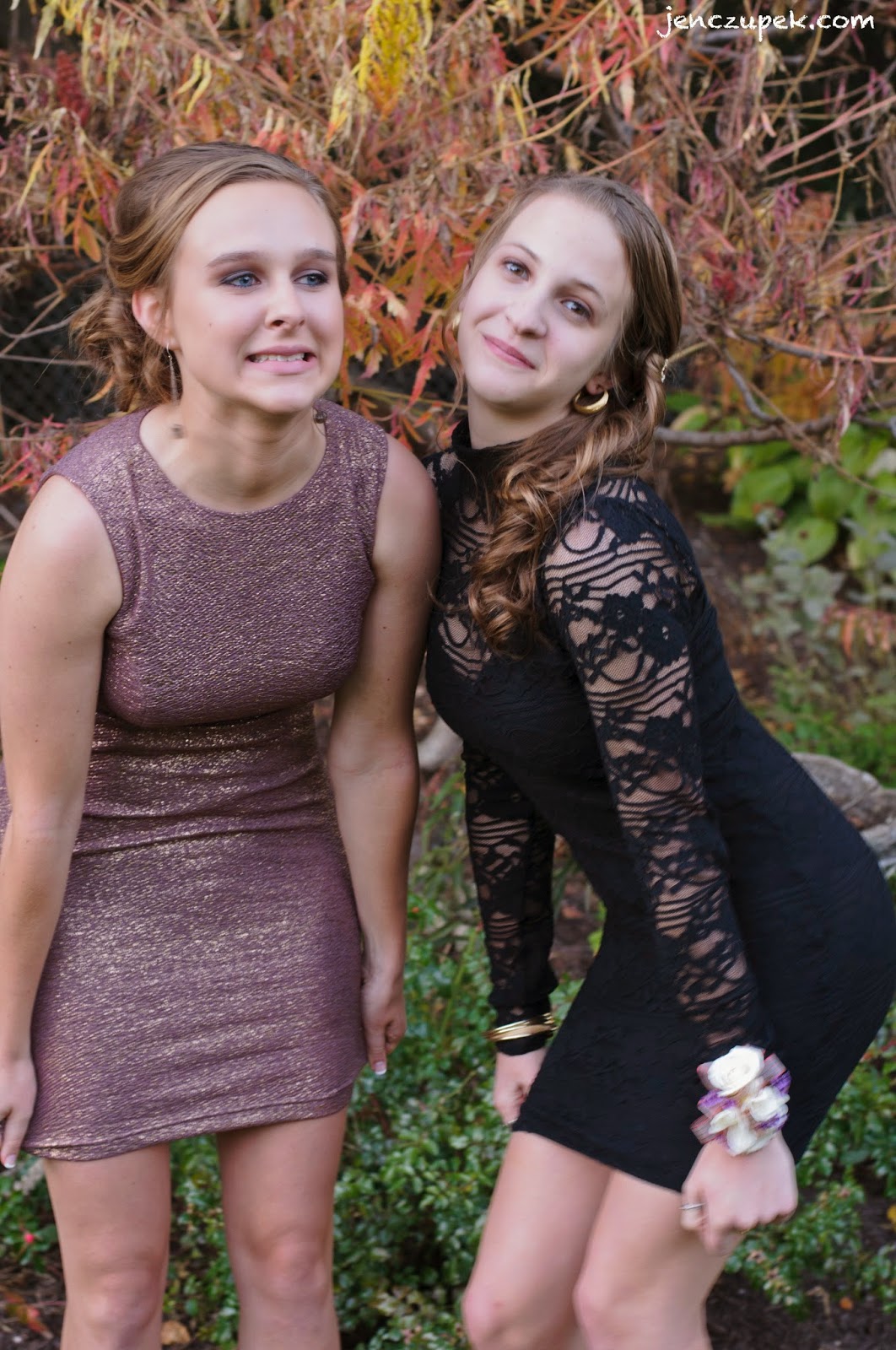 Oh well. Despite the creeping hemlines, they looked cute and had a great time. 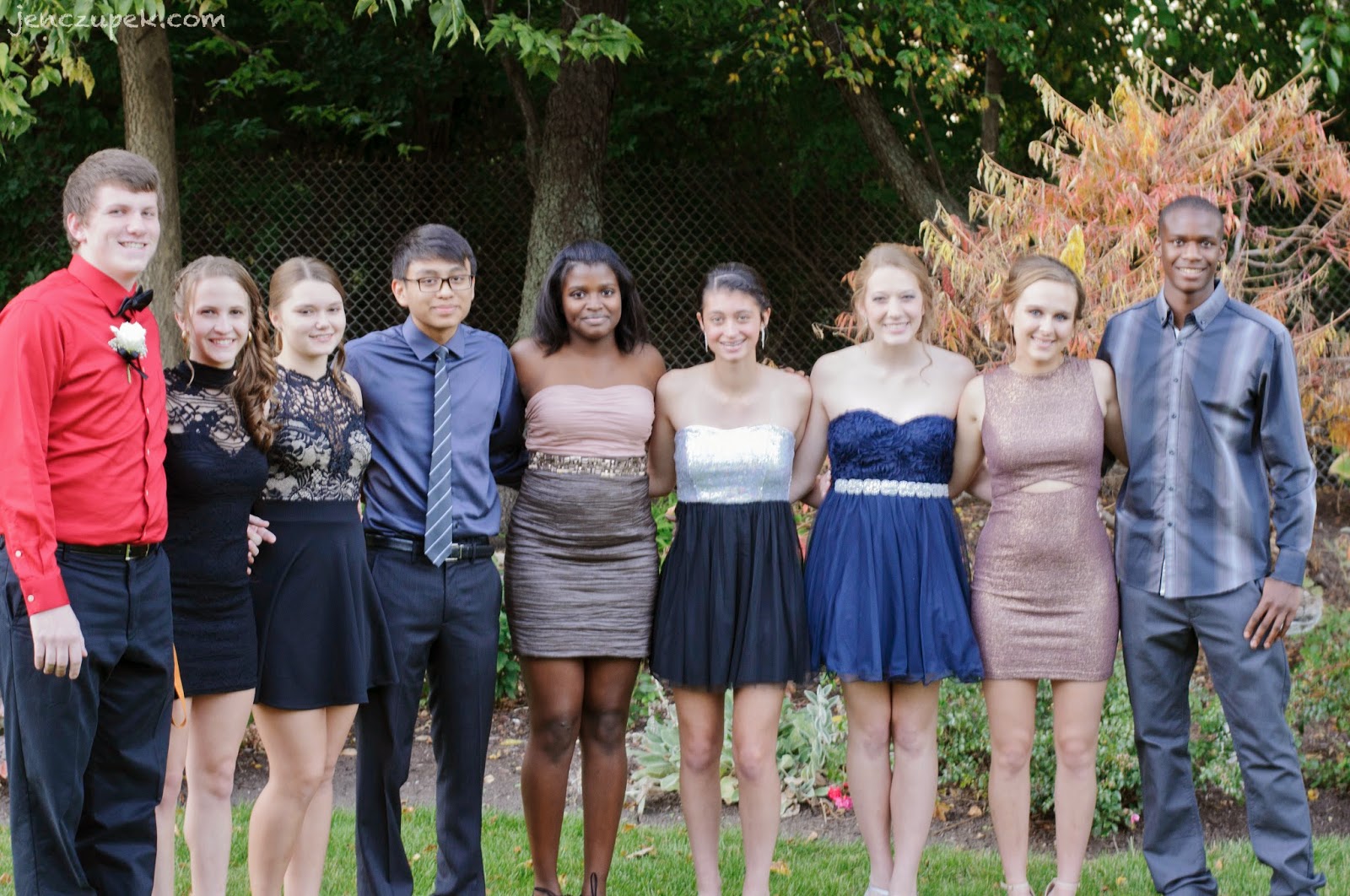 And a dress is still a dress. At least they're not wearing "slacks" as one of my dear high school friends so eloquently pointed out recently. Yes, in hicksville USA back in the day, we typically wore slacks to the homecoming dance. On Friday night - AFTER the football game. In all of our wind blown, permed-pulled-out-with-a-curling-brush, aqua netted, mullet-outgrowth glory. I just so happened to throw a fashion-forward wrench into things one year with my fall patterned, nightgownish fancy long dress. 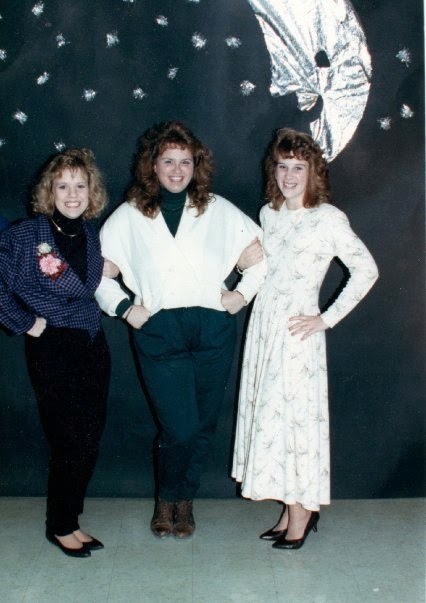