Today I have a very simple, brief word of advice to newlyweds:

Do not have sex in March.

For lo, no matter what, sex in March results in conceptions in March. And what do March conceptions bring?

There is no reason for anyone other than baby Jesus to be born in December. I wish someone would have advised me to practice abstinence in March. And told my in-laws the same back in March of 1970. And cautioned my brother to hang on a tic when I'm sure he and his wife declared a New Year resolution to procreate. Twice.

I know the December and January babies across the globe are shouting out with a hearty "AMEN!"

So if you're one who just looooooves the month of December and all the holiday fun and tradition between Thanksgiving and Christmas and you recently wed, do yourself a favor and abstain in the month of March. According to my very own December baby, July is a good month to get funky. Because in his opinion, a March birthday would be the bomb.

Every year on his birthday Mr. Musky says how jealous he is of me, because I get to celebrate in June with a boat ride and an outdoor dinner. He gets a nosy dog, chilly weather, and never has the pleasure of dining alfresco on his big day. For the math challenged, that makes September another acceptable month for foolin' around. 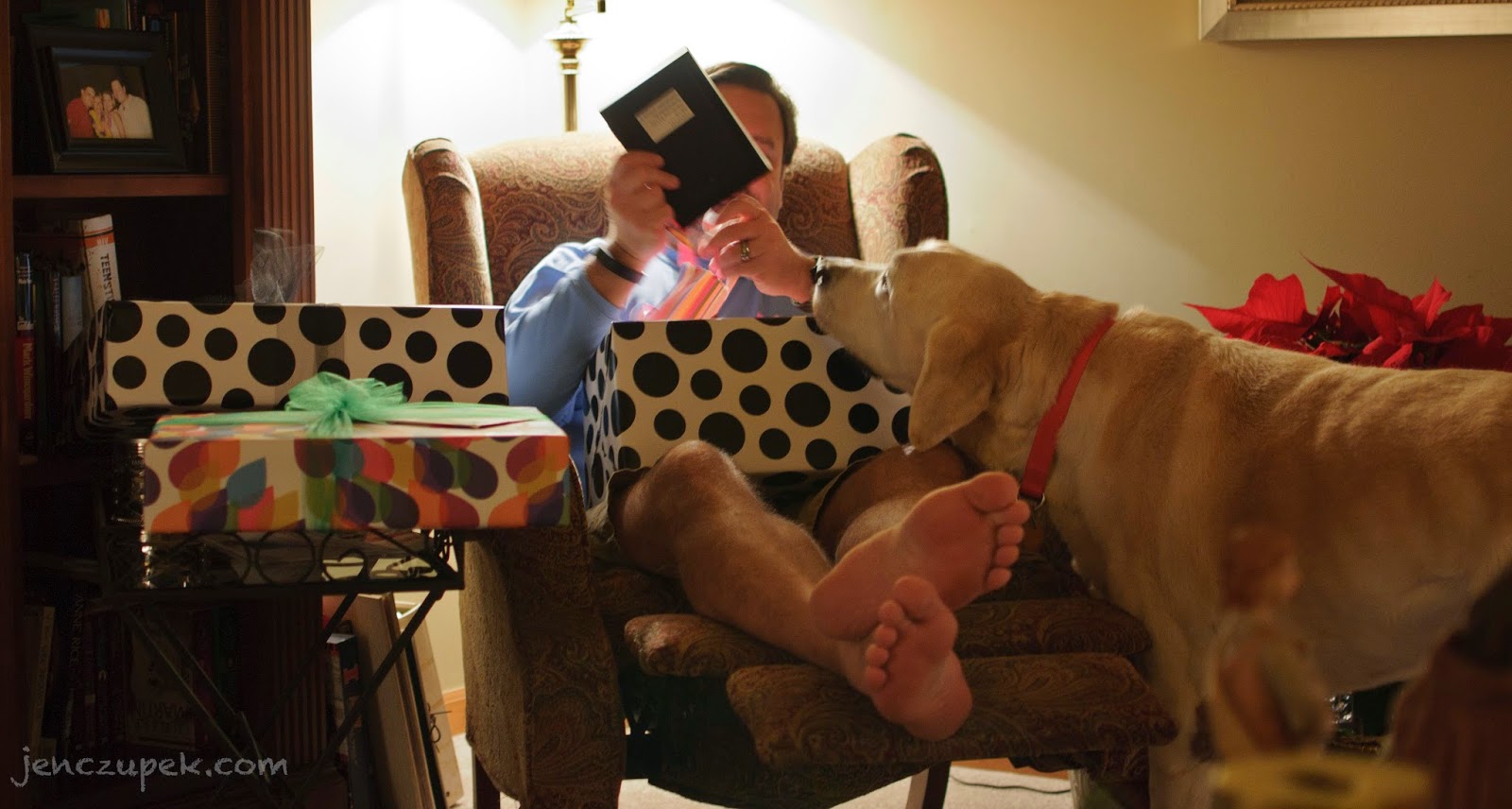 All that griping aside, we do what we can to keep birthdays special and independent of the biggest holiday of the year around here. In our household, birthday dinners are special occasions offering the perfect excuse to eat out at a fancy restaurant. Capital Grille seems to get the nod often. But after Thanksgiving, Kahley merely mentioned that she'd like a Daddy Paddy Melt at some point. Jake seconded it with a request for homemade fries, so visions of savory goodness nestled in my beloved's noggin. Instead of dining out, he said he'd walk me through how to make his world famous Daddy Paddy Melts.

But I drew the line on homemade fries. No way was I getting the Griddler AND the fryer out on the same night - regardless of whose birthday it was. I'm not that crazy.

There's a very specific method to the madness that must be followed. First, have an apéritif. Look who bought himself a birthday present. Why hello, Mr. Sapphire. 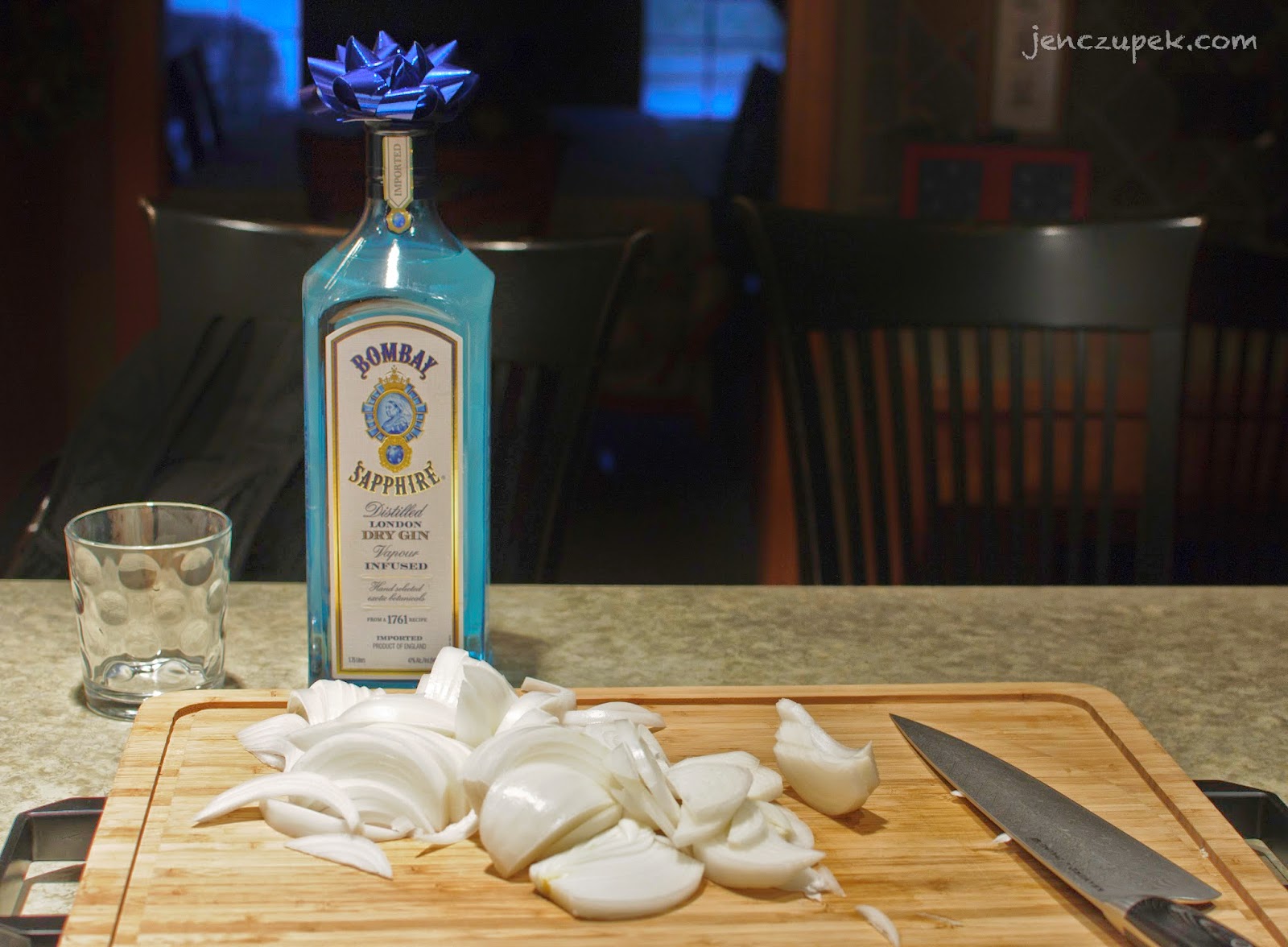 The Birthday Boy craves nothing other than a bit of the goodness out of the blue bottle with some water. All. The. Time. I, on the other hand, mix it up. Sometimes I go pure, and sip it with club soda and a lime wedge. Other times I squeeze a chunk of orange in. On birthday night though, I got really fancy and used a hunk of grapefruit. 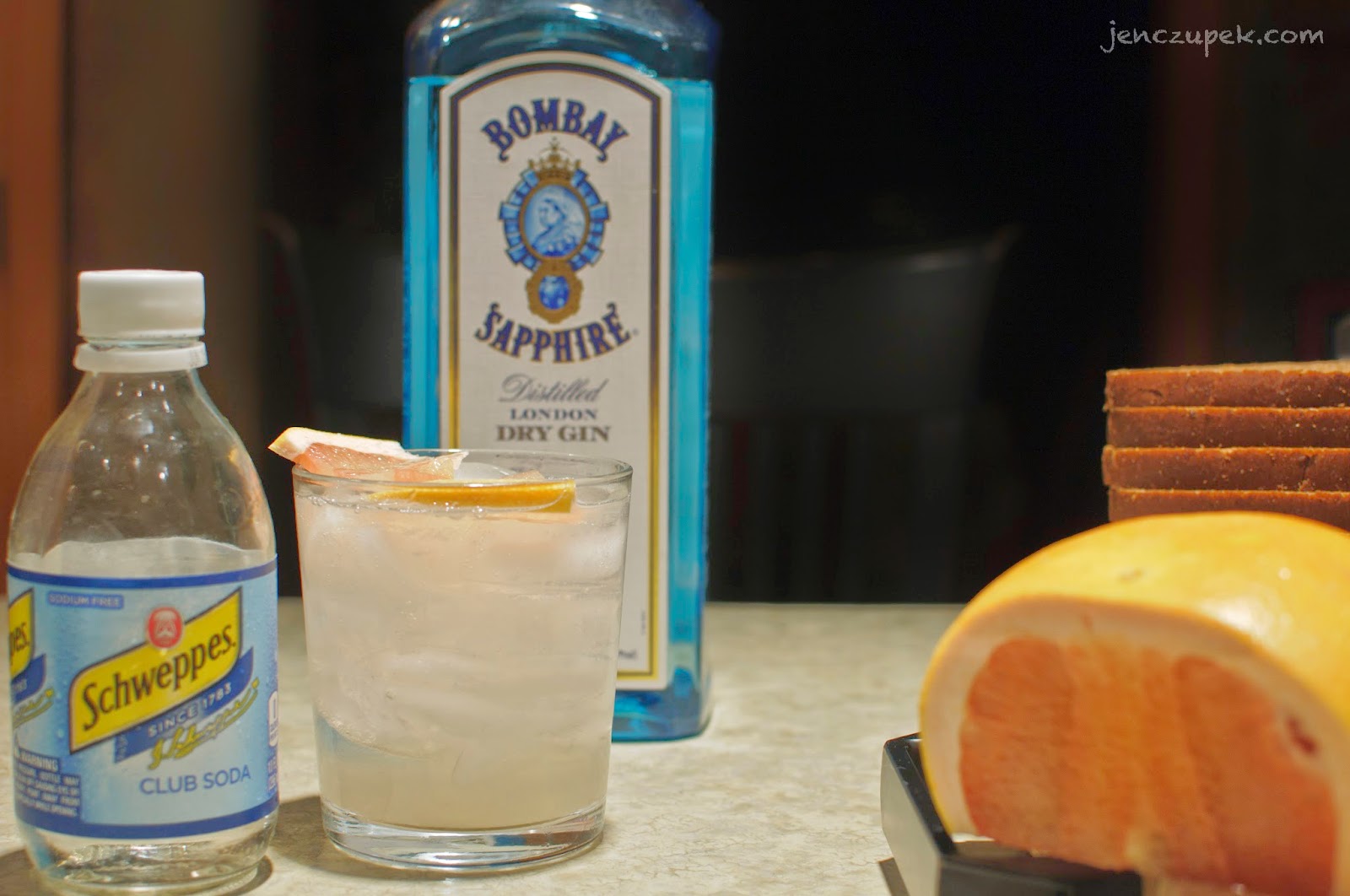 It's a bitter concoction, so if you like things a bit sweeter I recommend using a splash of honey simple syrup. Ginger simple syrup would probably taste yummy too. Basically anything sweet you've got that cuts the bitterness.

Cocktails at the ready, it was time to begin. But first - a variation on homemade french fries.

Preheat the oven to 450 degrees. Scrub the potatoes and slice them on the thinnest setting of a mandolin. 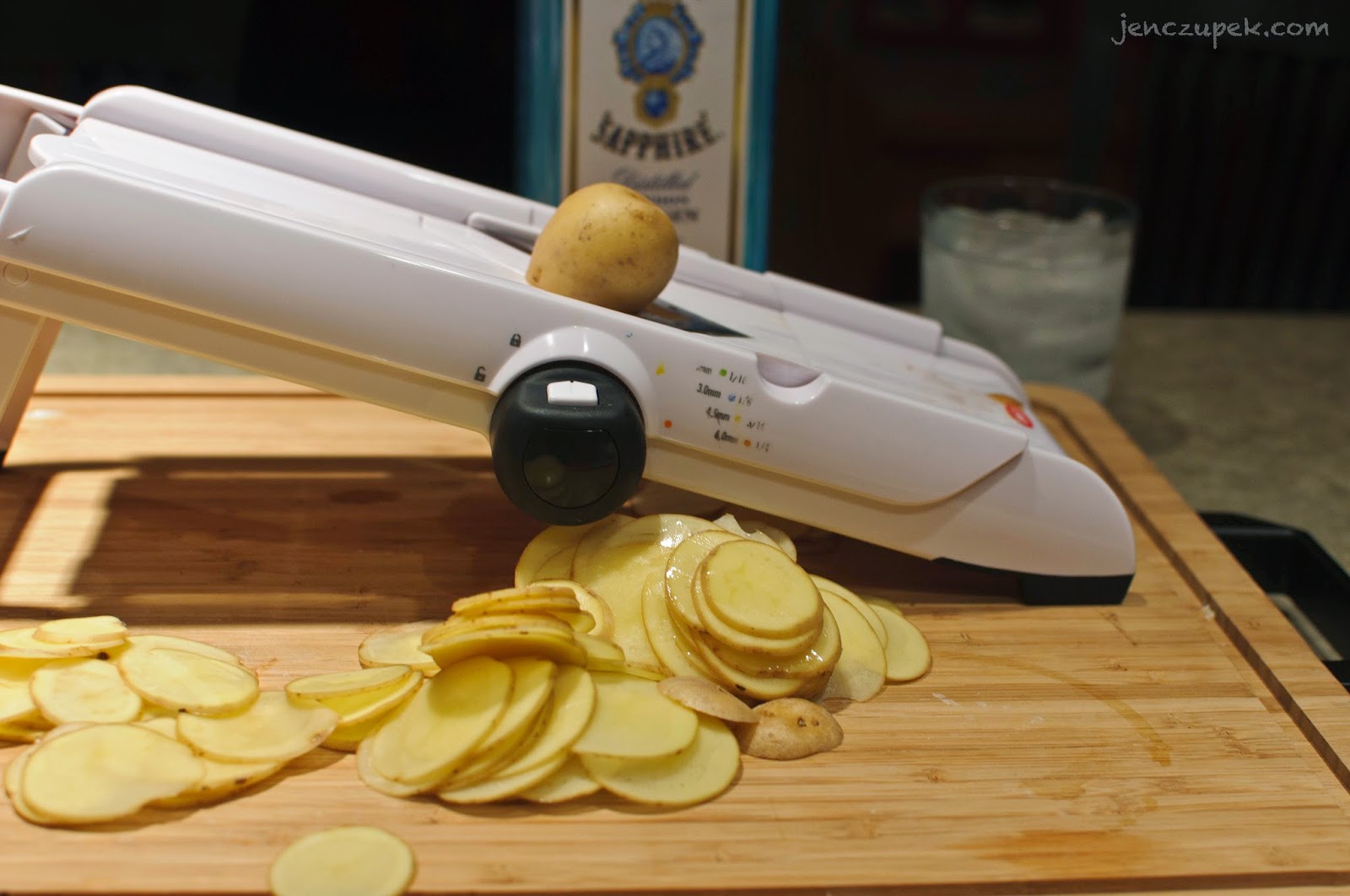 Spray a baking sheet with oil, line up the potatoes on the tray, and sprinkle them with salt and pepper. 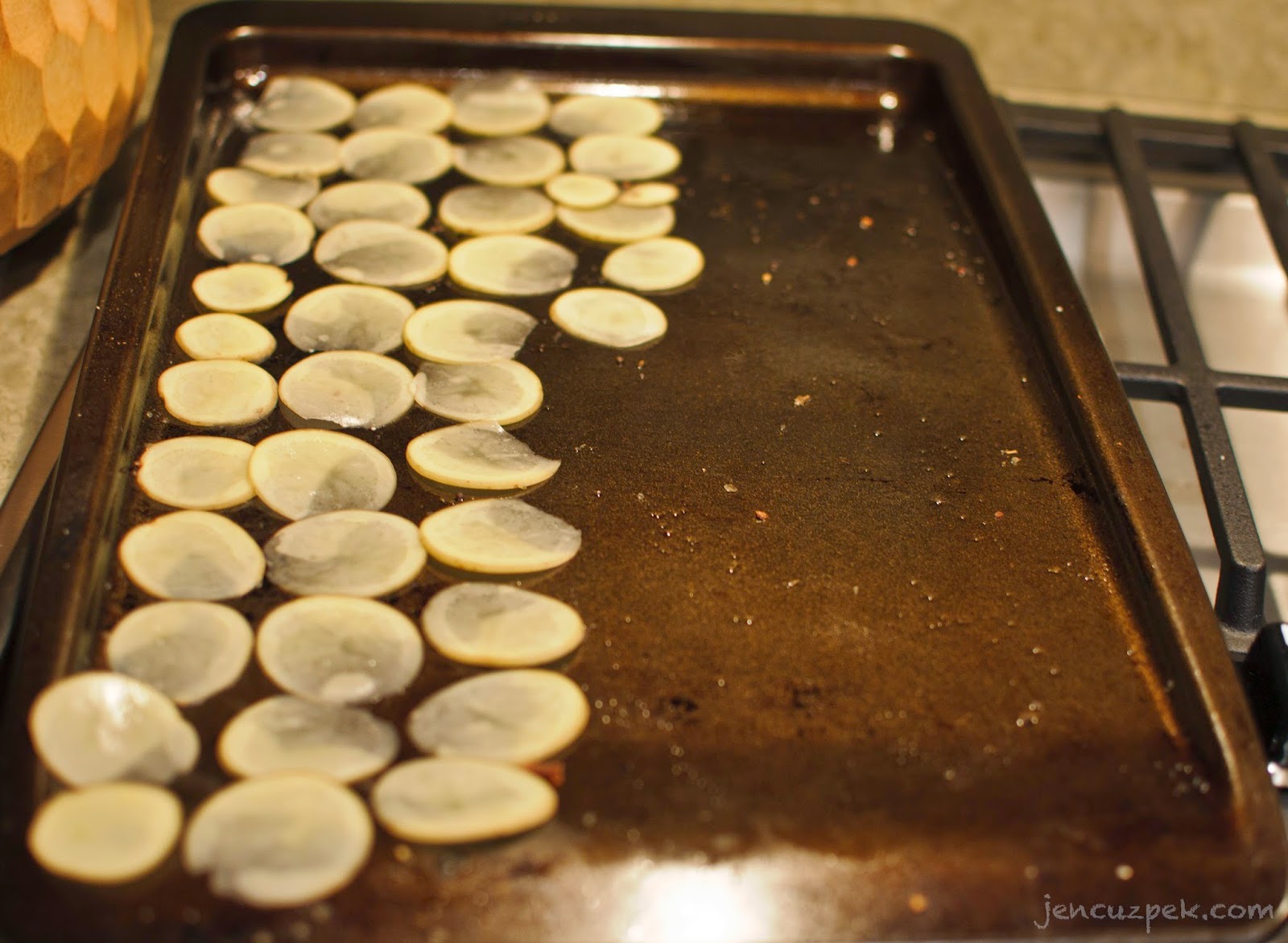 Pop them into the oven and bake them for 10-15 minutes. Watch them closely, and pull them out of the oven when they reach your desired doneness. We all like them a very dark brown color - not quite burnt, but definitely cooked and crispy. Remove them to some paper towels to cool.

Combine the first four ingredients until incorporated, being careful not to over mix. Divide the mixture into half, then in half again and form each quarter of meat into an oval shaped disc. Place on parchment paper on a sheet tray and store in the refrigerator.

Warm a frying pan over medium-low heat and add the 2T of cooking fat. Add the onions and sprinkle them with salt and pepper and cook, stirring frequently. After five minutes, add the chopped garlic and continue to cook the onions for another 10-15 minutes over low heat. Set aside.

Preheat the Griddler (or a grill pan if you don't own a griddler) to 375 degrees. Once it comes up to temperature, add two of the patties, close the contraption and cook for 5-7 minutes. Remove the patties to a platter and cook the other two. The burgers will not be cooked through; rather, they will have solid grill marks on them and will be 3/4 of the way cooked. 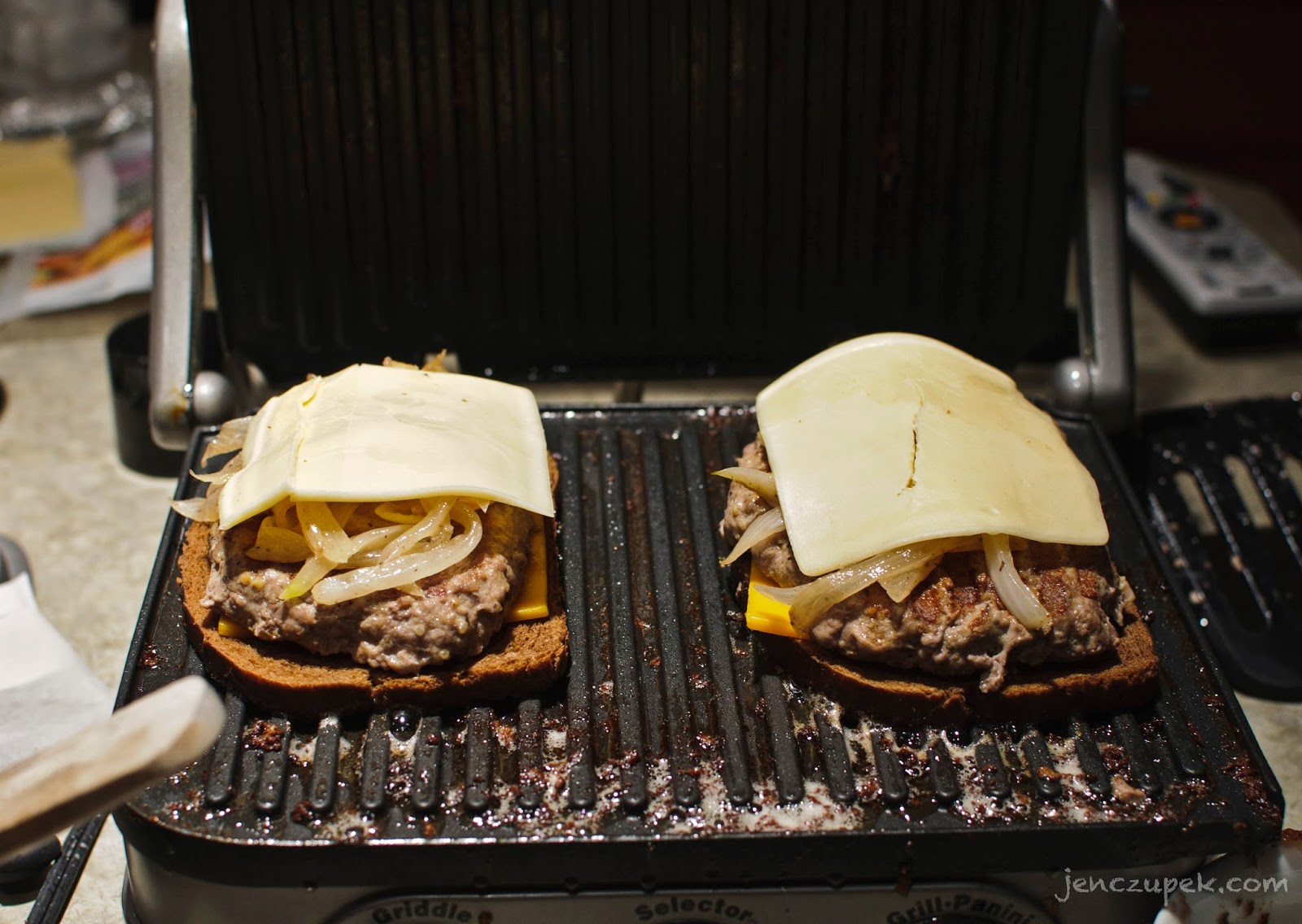 ...and top them with another piece of bread butter side up. Close the grill and cook the sandwiches until the cheese begins to melt and the sandwiches are crunchy crispy to the touch. Remove and keep warm while you make the other two sandwiches.

If you are cooking these in a grill pan on the stove, you'll need to carefully flip the burgers, cooking them on each side for approximately 4-5 minutes over medium-low heat.

Per the Birthday Boy, it was time to move on to one of his presents - a trio of wine which I highly recommend for the wine lover in your life. We always have wine on hand, but rarely splurge on expensive bottles. Since he is nearly impossible to buy for, I sprung for three really nice bottles, wrapped them up for him, and told him to go on a wine tour from France to Italy to Napa. 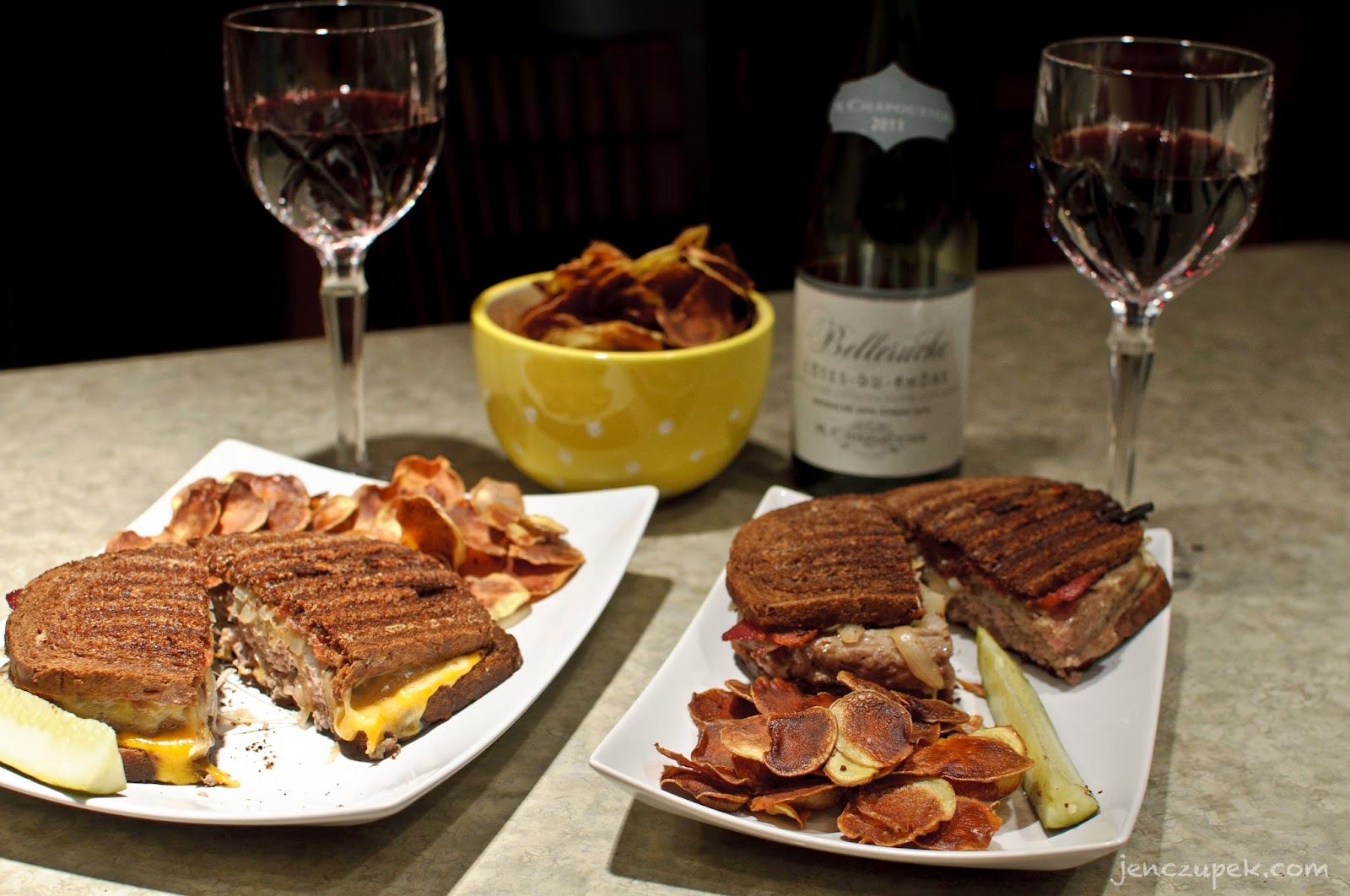 It doesn't hurt that I get to enjoy the spoils of his birthday. Even if French oaky wine isn't my favorite, it pairs wonderfully with the Daddy Paddy Melt and crunchy Potato Crisps. 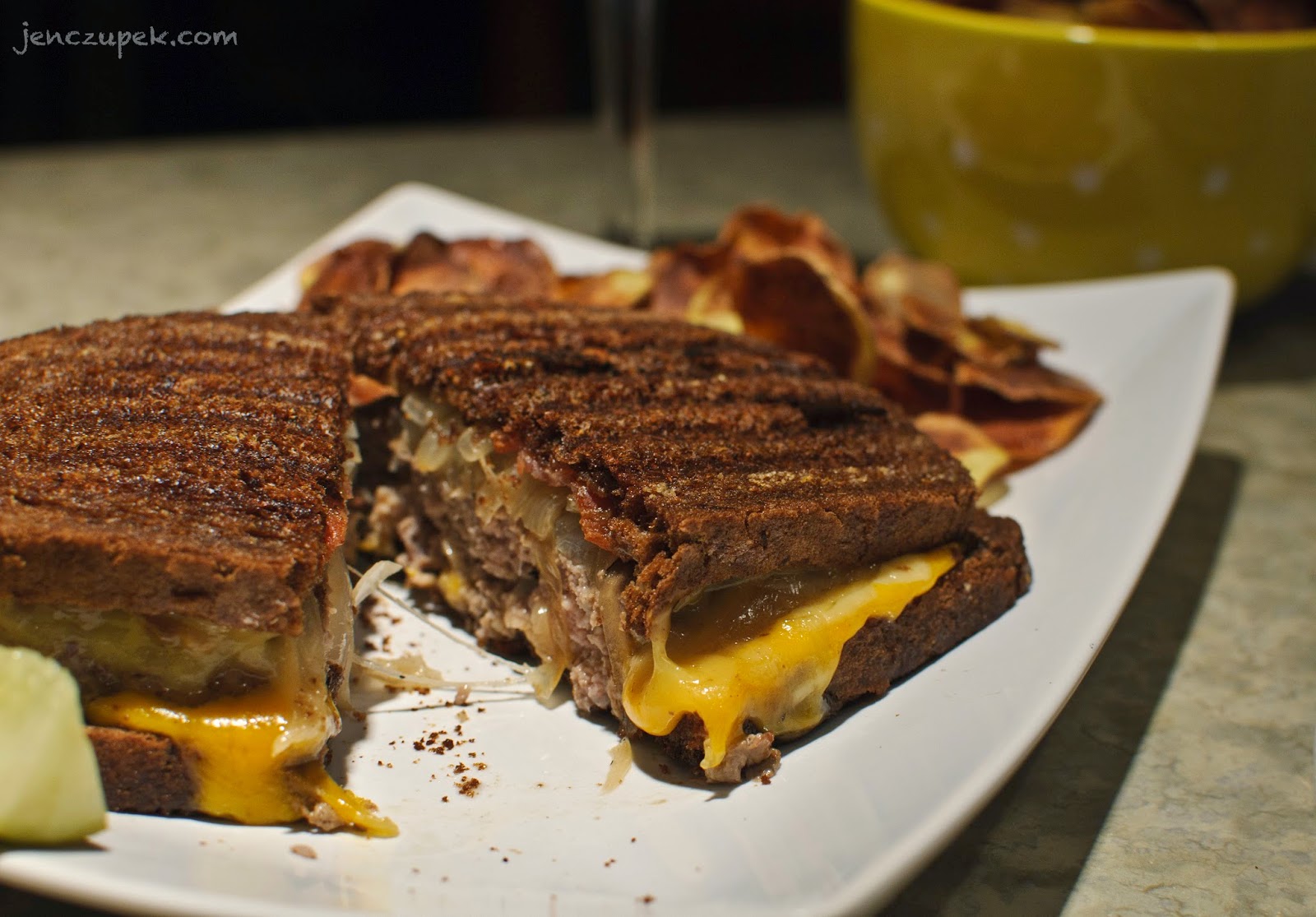 Give this a whirl to celebrate someone's birthday or on New Year's Day (hello hangover helper). It's an all around winner in our house.