Come, Go On A Trip With Me to Dana Point

The last two years found us in beautiful Dana Point, California for Spring Break. Sadly, that won't be the case this year. So I'm taking myself on a virtual visit via last year's pictures. Won't you join me? Especially considering that I teased you with only a few glimpses of our adventures last April?

First, for a repeat vision, here's why we love this place. Enough said. 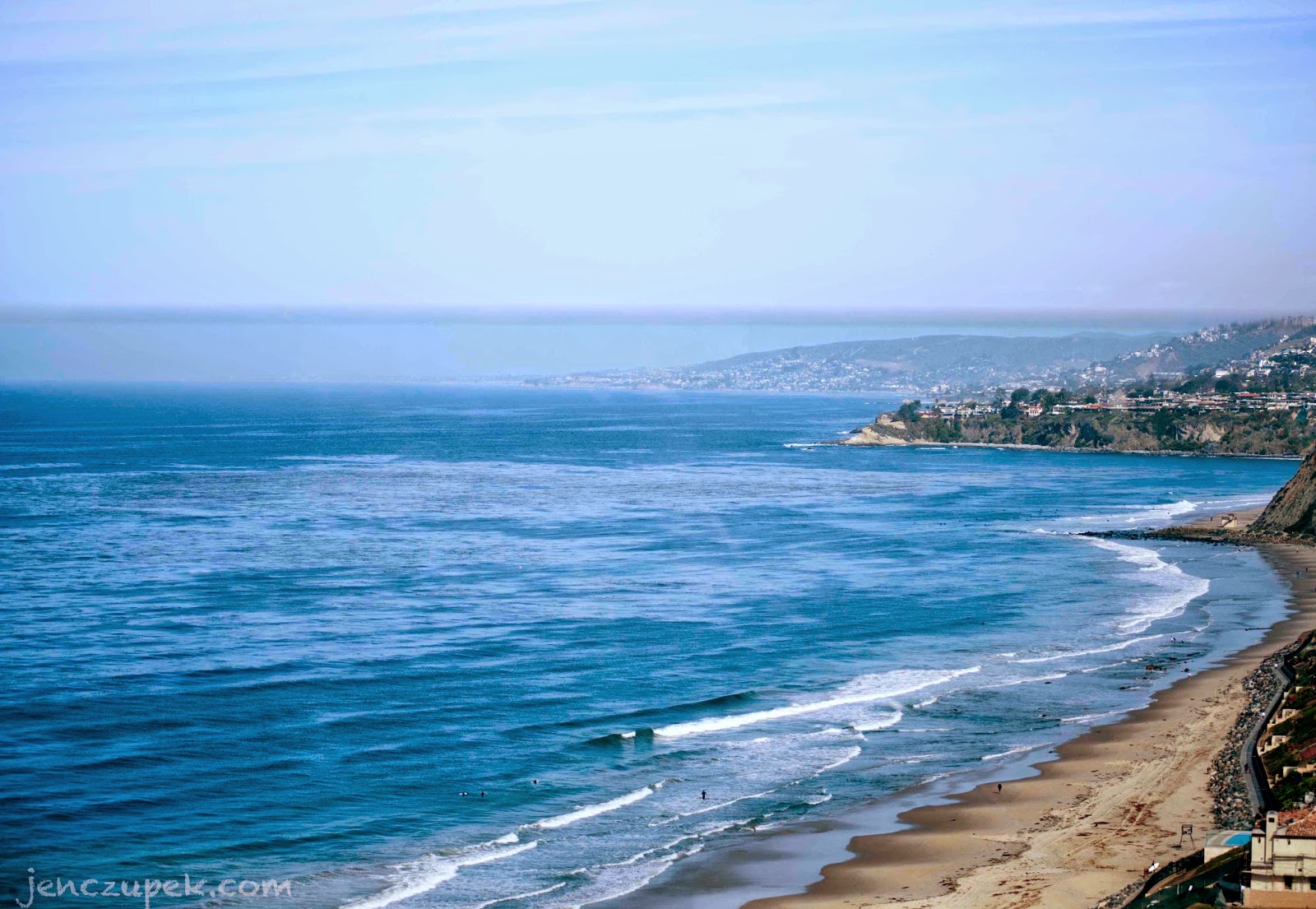 On day one we headed out to the Farmers' Market. We lost ourselves in the sights and smells, sounds and tastes. Mr. Musky even walked away with a new wedding band that he wears to this day. Wonky, I know. But at least he's not high maintenance when it comes to jewelry.

I've never seen a dried fruit stand at a midwest market. But I dug it. 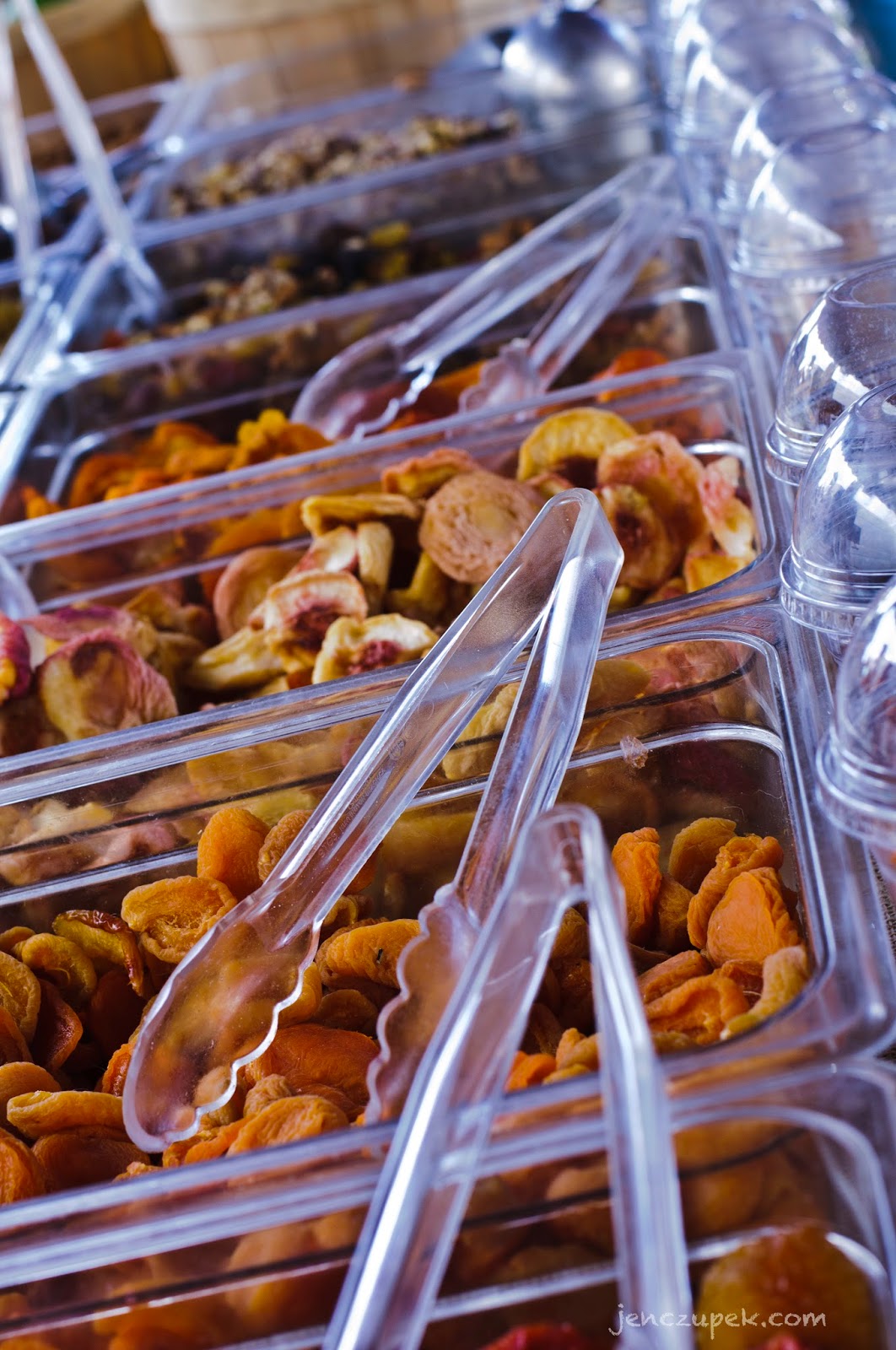 Oh, the ever loving strawberries. In addition to the Farmers' Market, they sell these babies on street corners down by the Dana Point Harbor. We bought pints during our stay. Several. 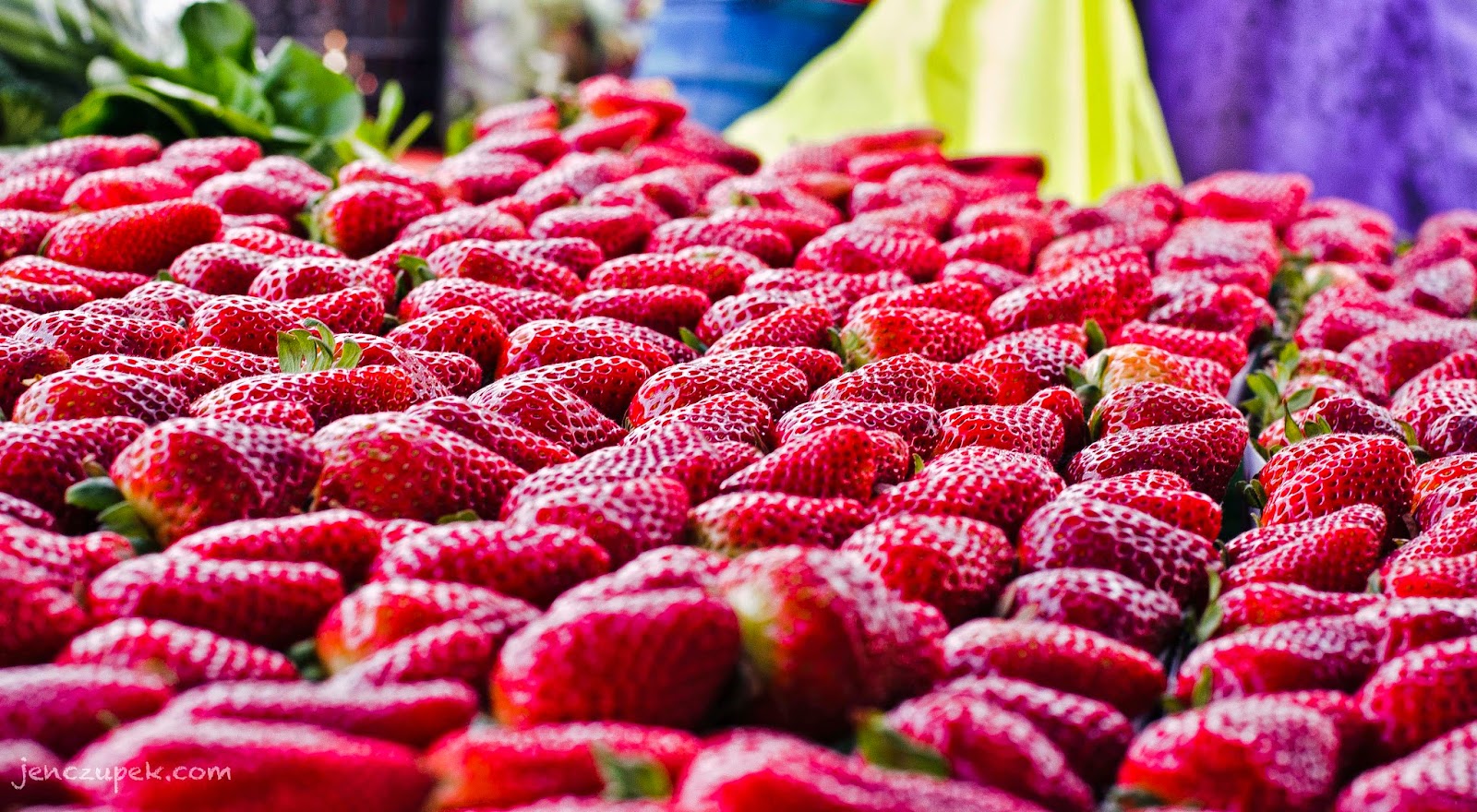 After gorging ourselves on fresh fruits and vegetables, we drove up the coast mainly to just show the kids some California landscape and scope out some of the northern Orange County beaches. We pulled over in a neighborhood and checked out the seascape.

My man, contemplating the Los Angeles Port in the distance - an operation critical to the success of his business. Threatening labor strikes are no bueno. But the Longshore Union reached a tentative contract agreement with their employers last Friday, so we're crossing our digits that things will settle down for awhile, once they process the logjam of ships and containers. 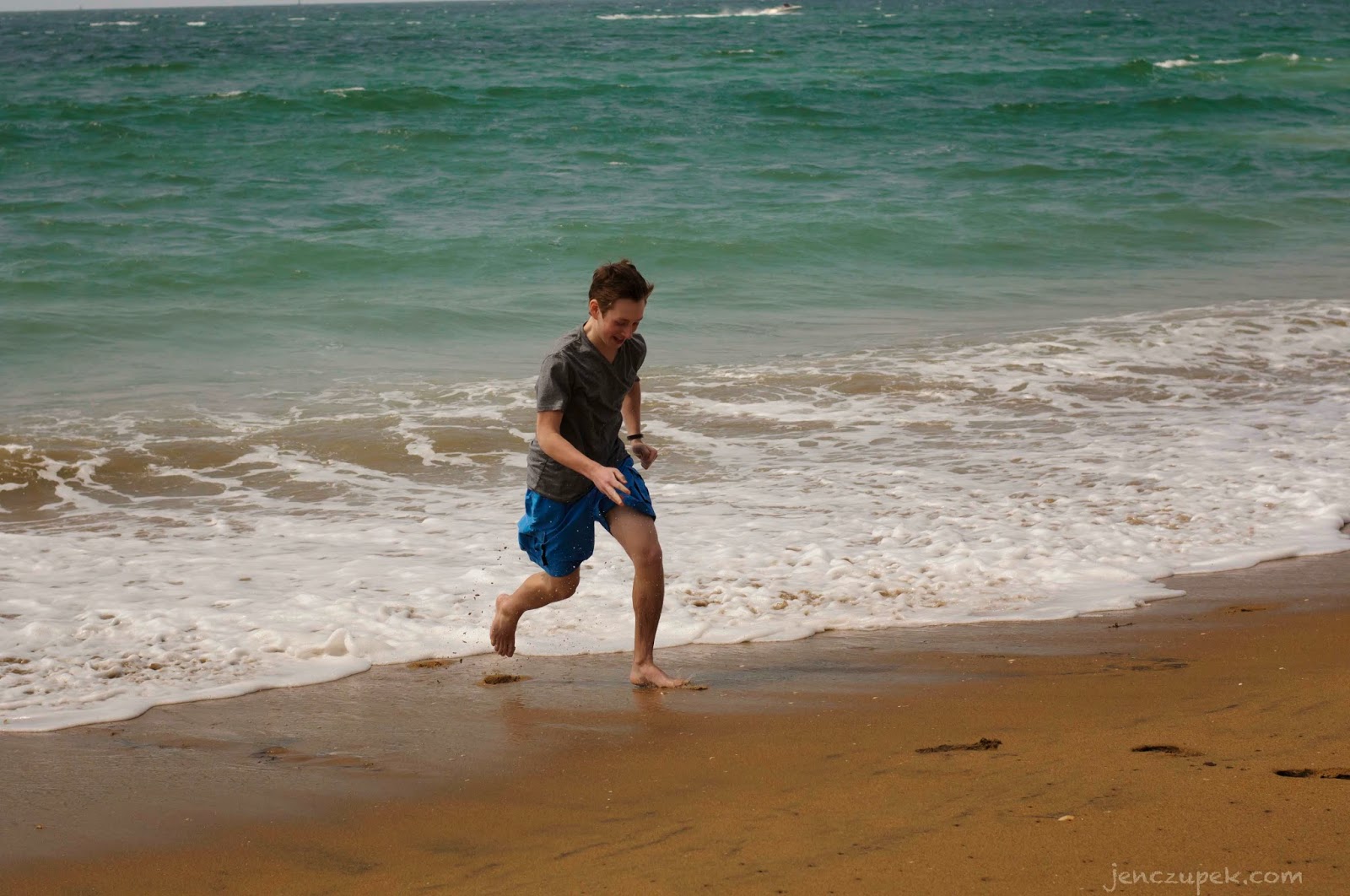 I love the first day of any vacation, when we're full of the joy of just getting started, with a weeklong eternity of warm sunshine ahead of us. It's quite the antitheses of the final night when the devil starts shaking you awake in the form of an earthquake, freaking you out so badly you just want Mommy and your own Midwest king sized bed with the down comforter. Suddenly waiting for summer doesn't seem so bad after all.

Take note: Two kids frolicking on the beach. Remember this so you won't think I sold one later. 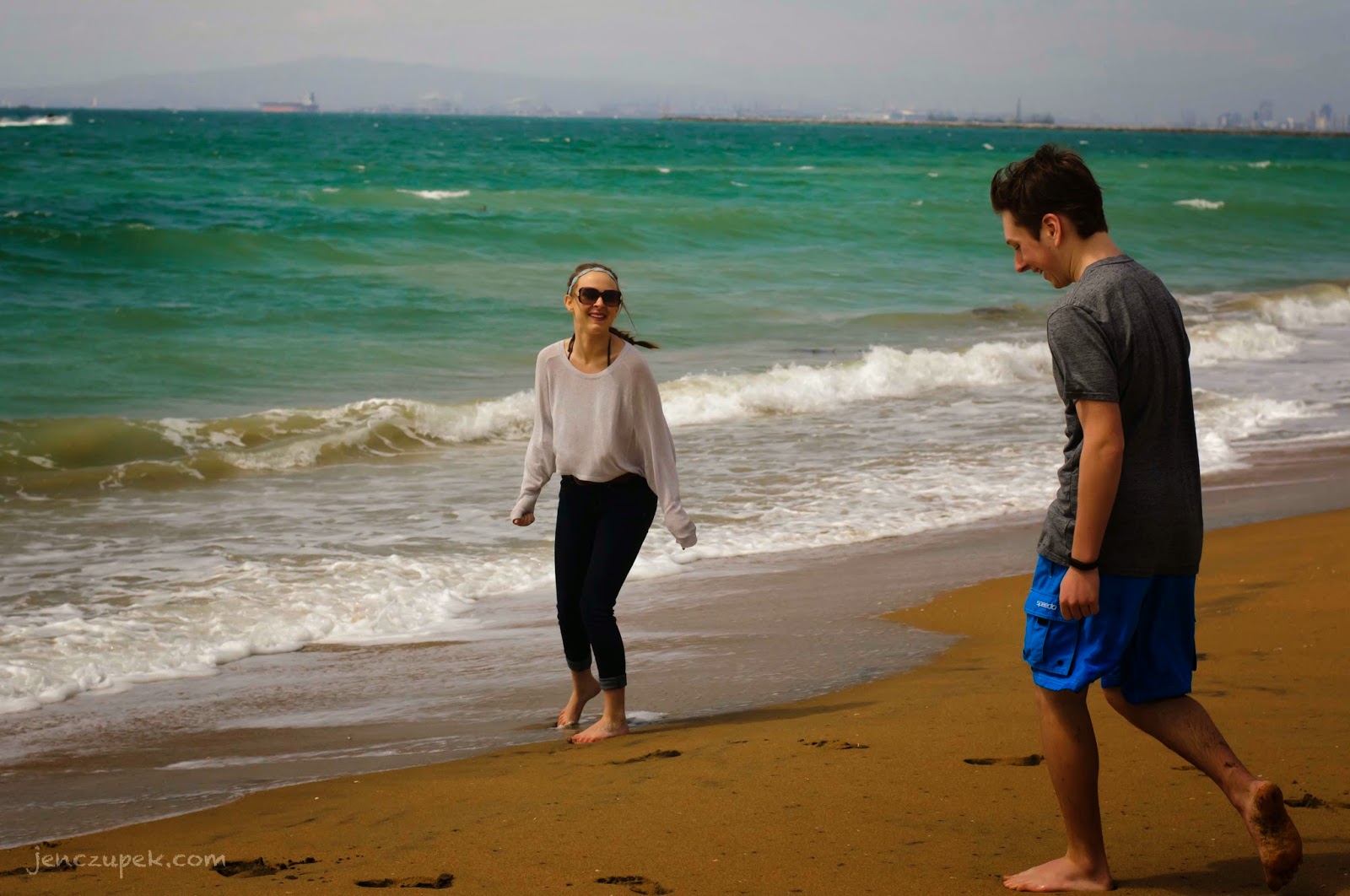 After a quick stop to check out the sights in Huntington Beach, we decided the beach in Dana Point would be just fine for the remainder of the afternoon. Chilly, cloudy conditions kept the locals in their Uggs and North Face jackets. We had the beach to ourselves. 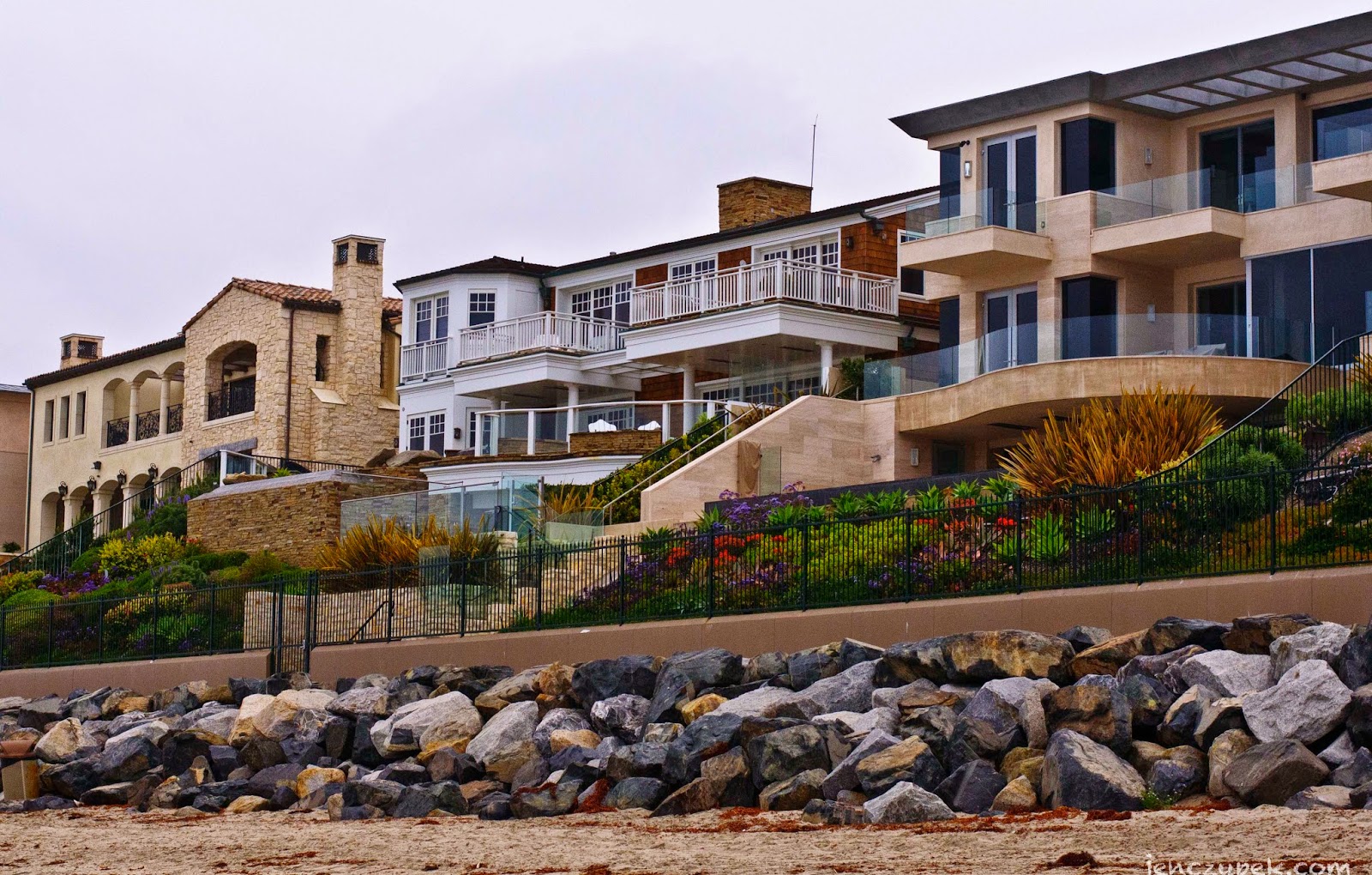 The kids scrounged up some wetsuits and boogie boards. Sixty-five degrees felt like a tropical paradise compared to below freezing temperatures back home.

I know this look. Jake is plotting. 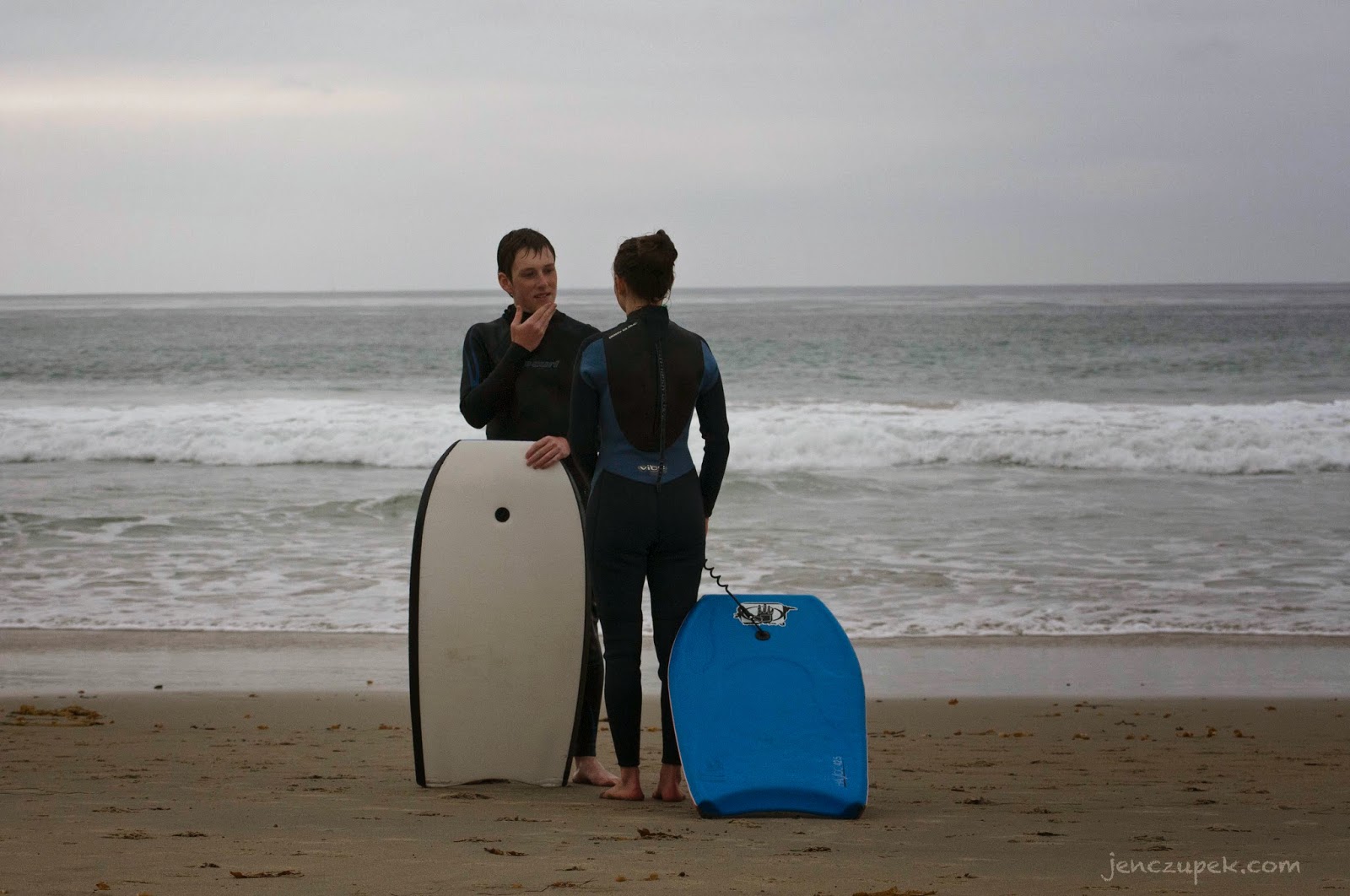 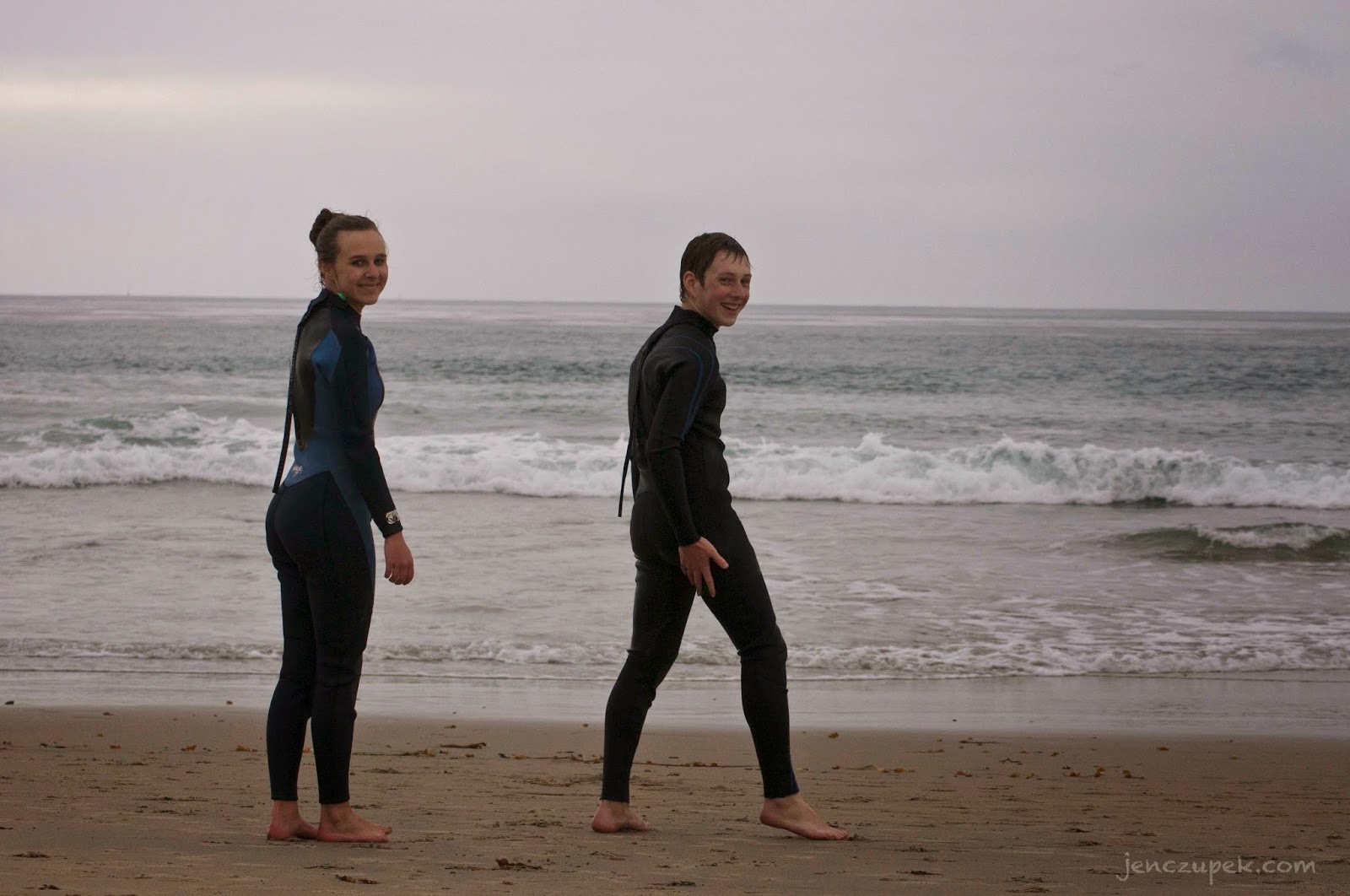 Uh oh. They have to share this wave with a surfer. 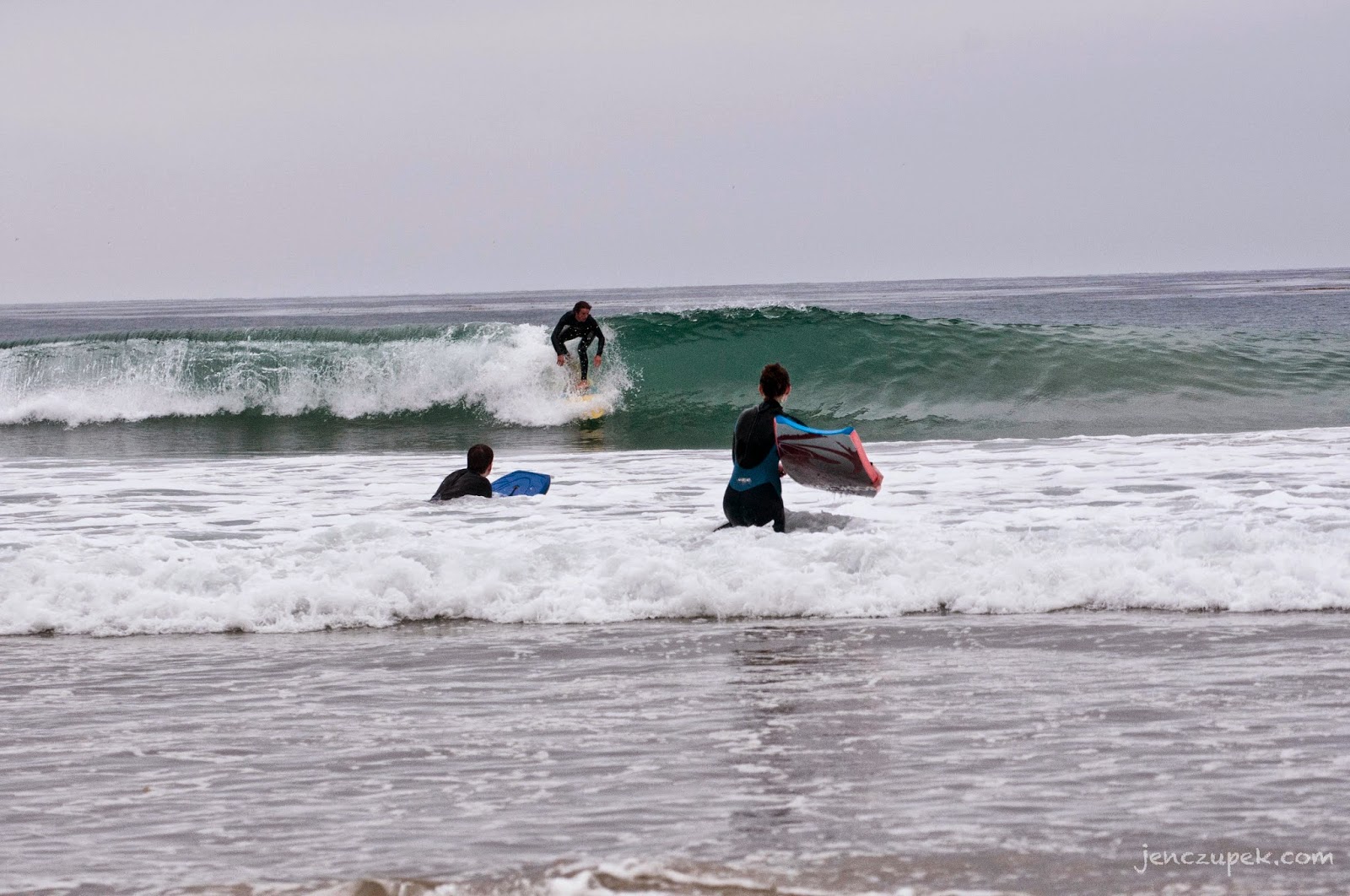 How sweet. At least they're not punching one another. 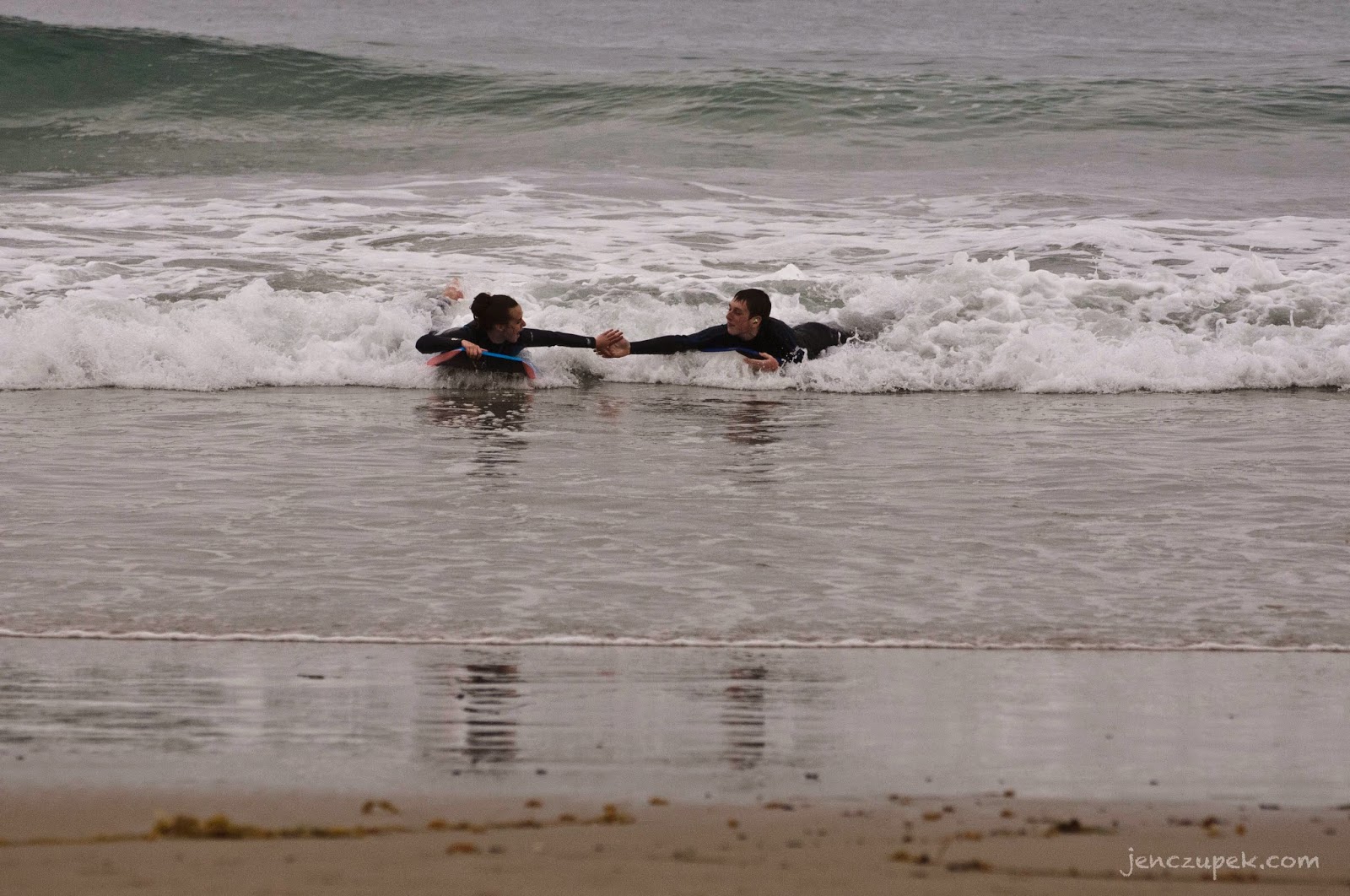 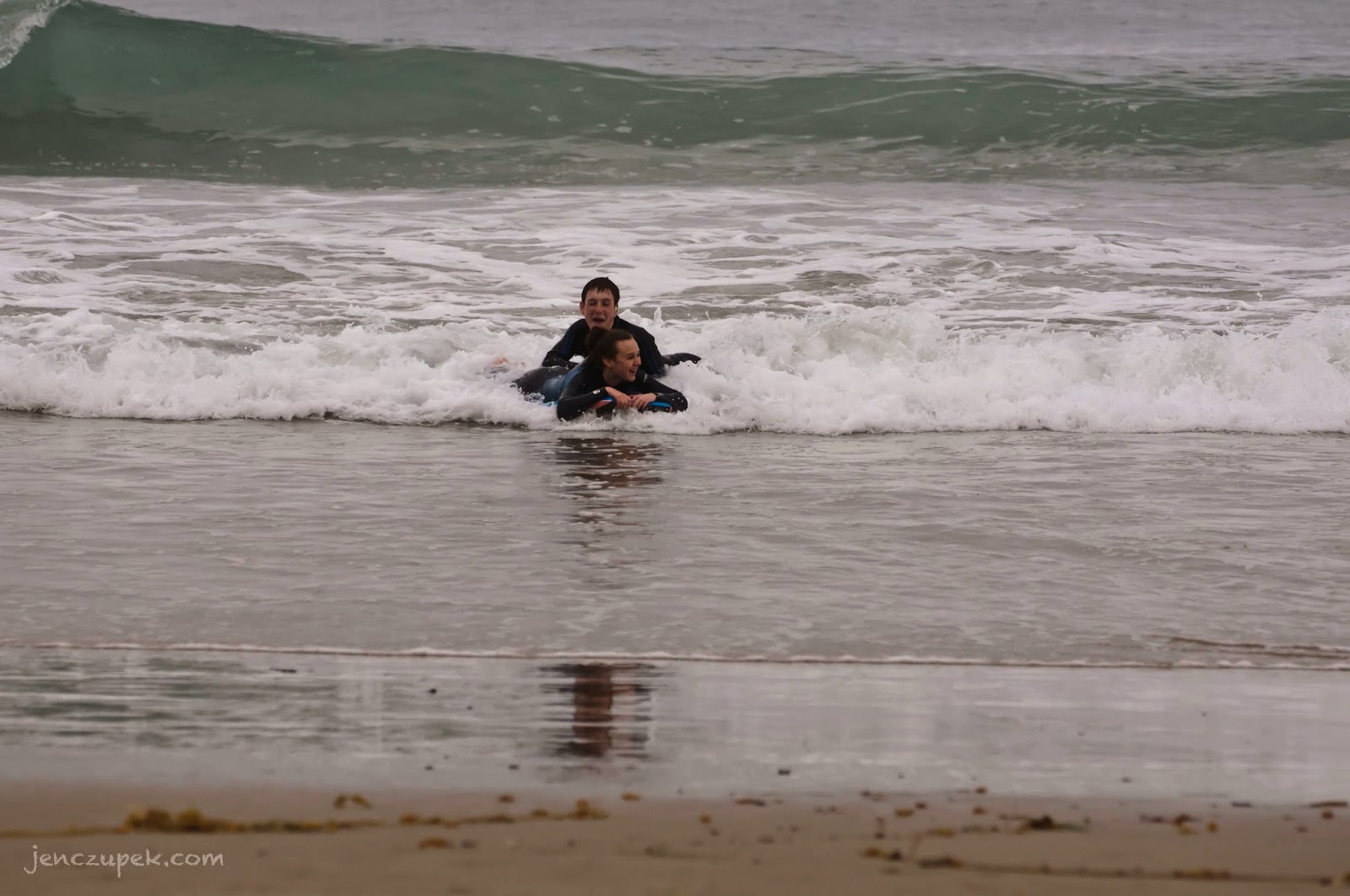 Jake loved playing in the surf. Even though he missed some hockey games. 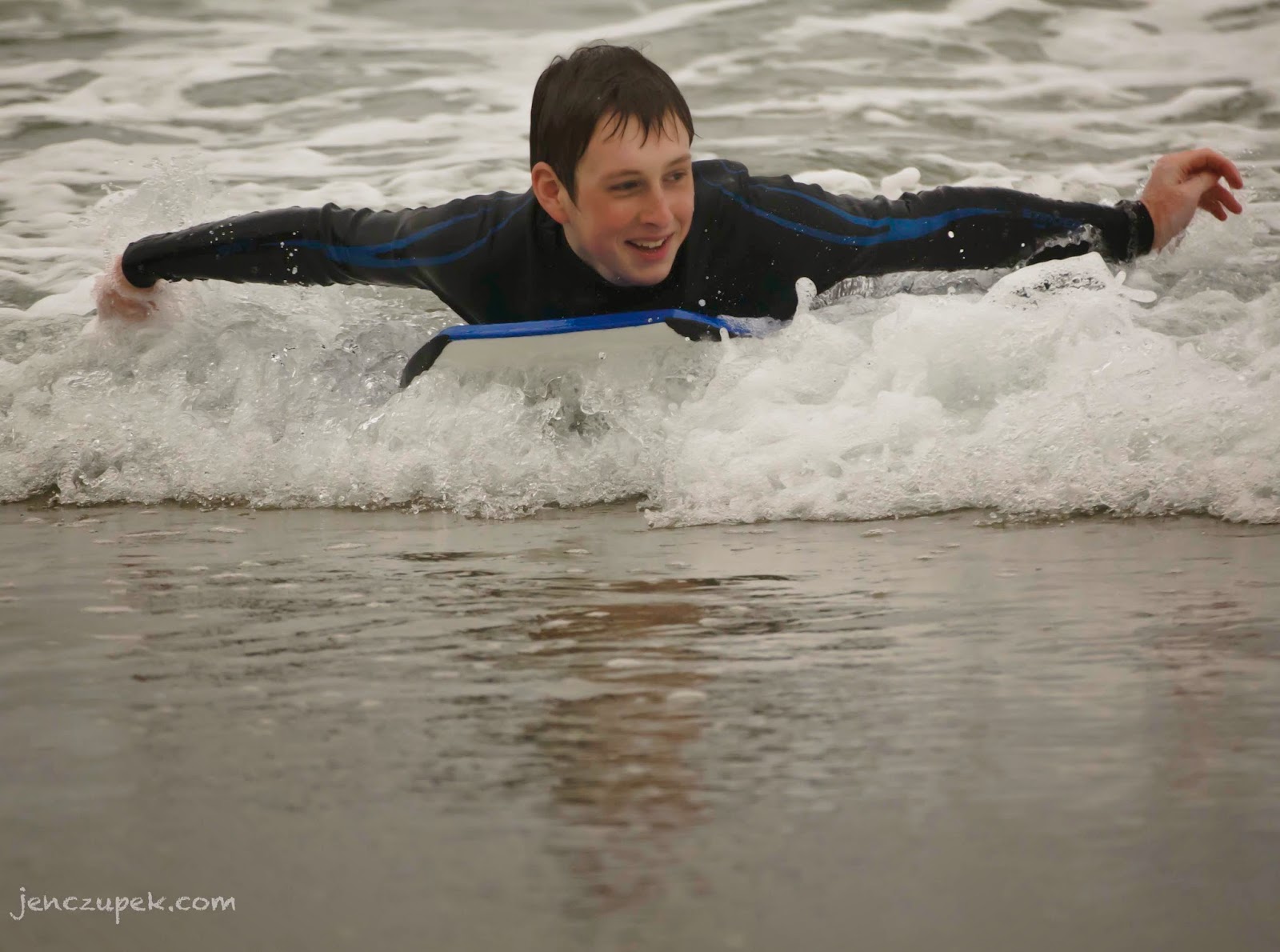 So did Kahley. But then, she loves everything about California. It's where she's in her element. 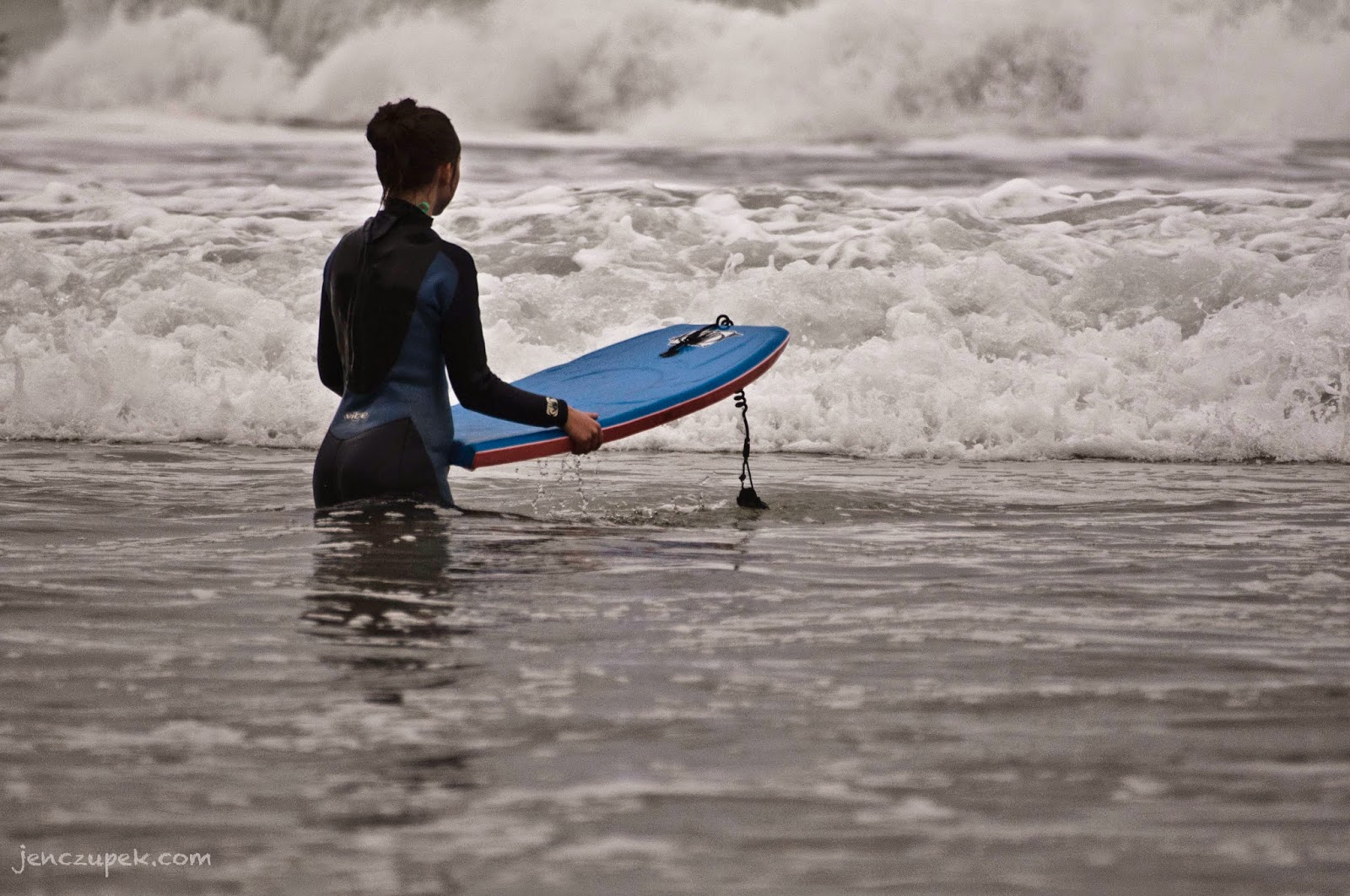 I think we all crashed at 8:30 that night, after dining on some grilled fresh fish and vegetables we picked up earlier.

The next day dawned much the same, with an even greater threat of rain. We marched ourselves to the harbor anyway for a ride out to Catalina Island. 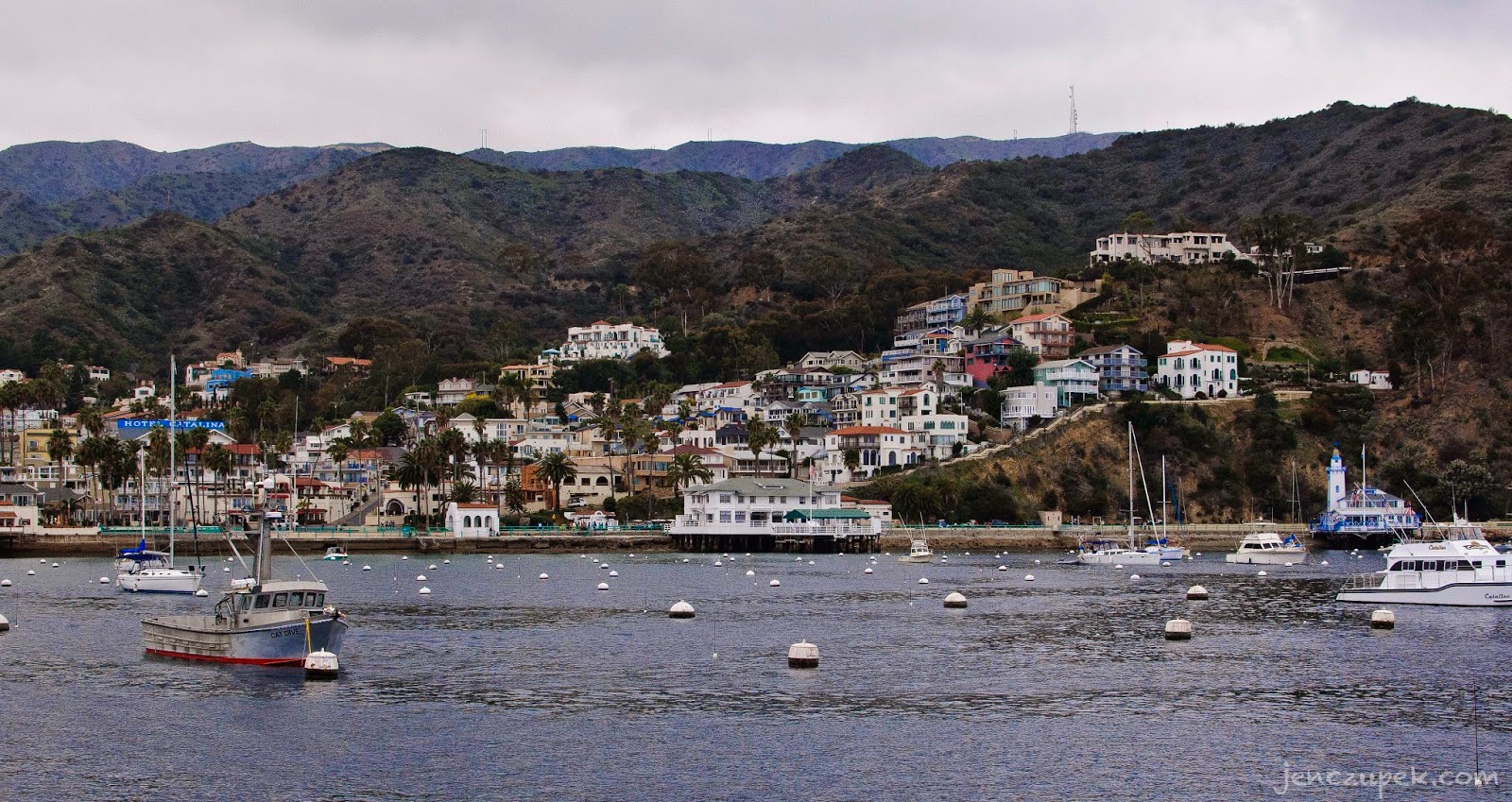 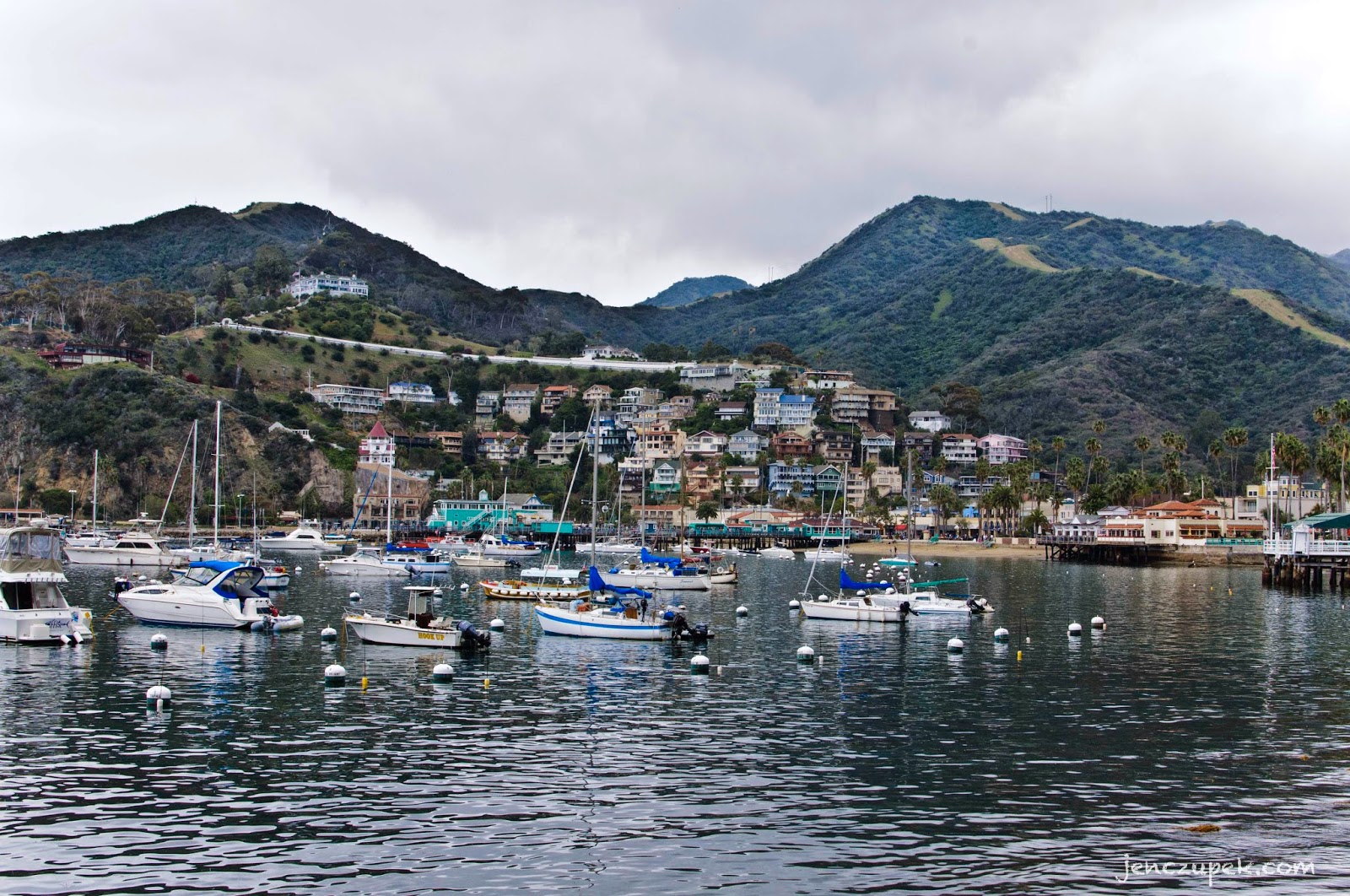 Look who we found on the boat with us. 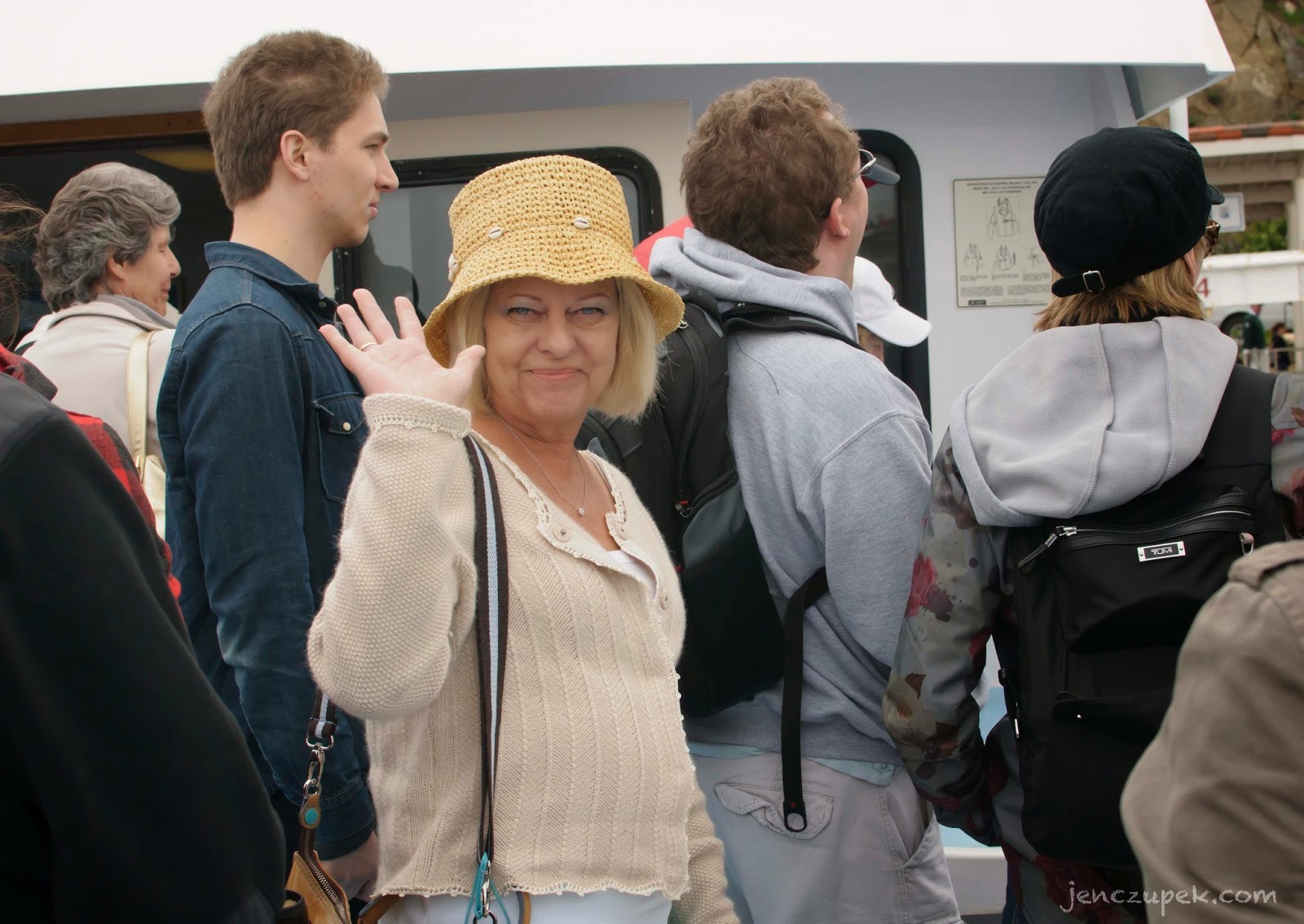 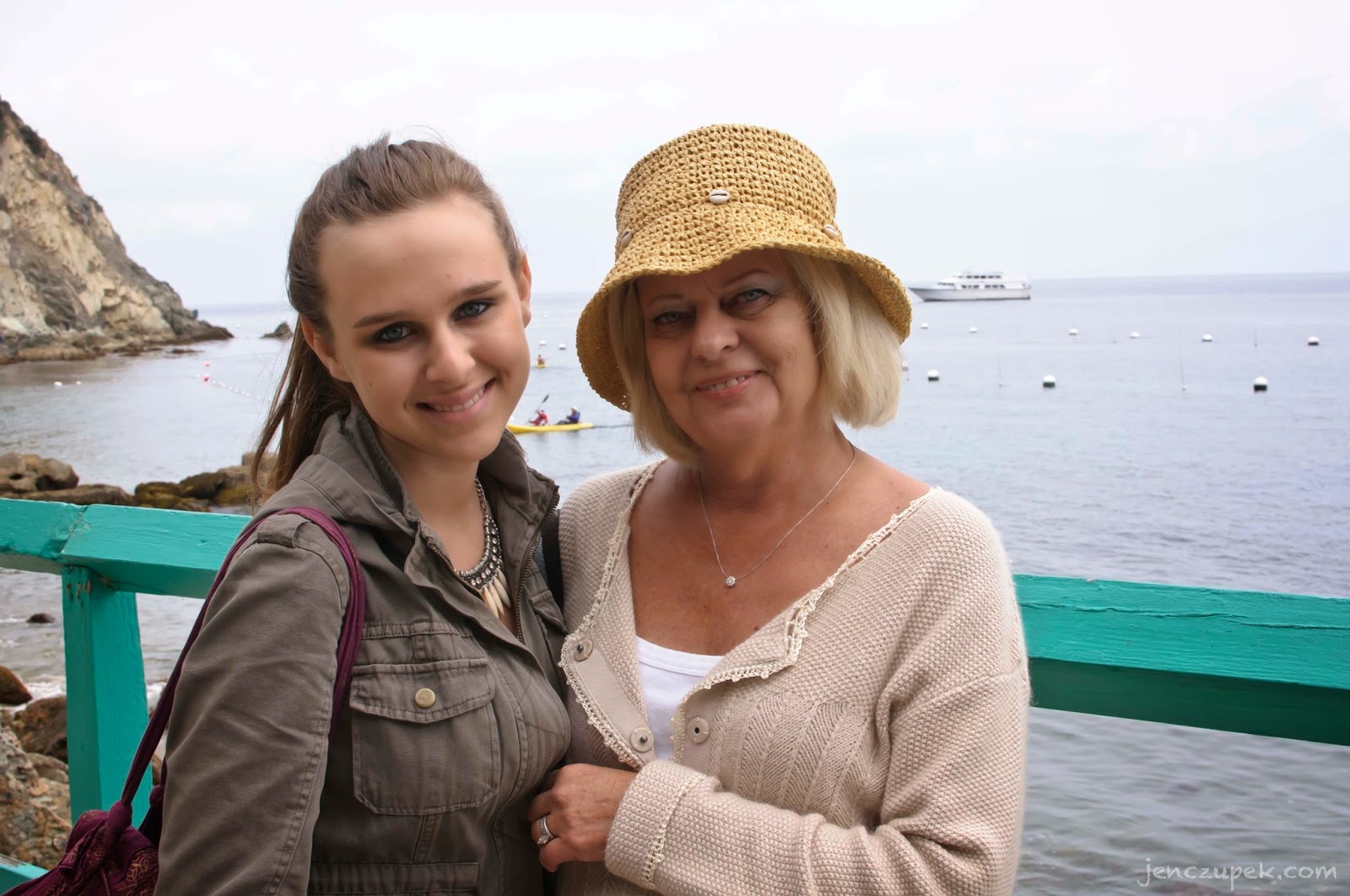 My mother-in-law lives in Palm Springs and came to the coast to hang out with us for a few days. She'd never been to Catalina and heard they had a few stores out there. 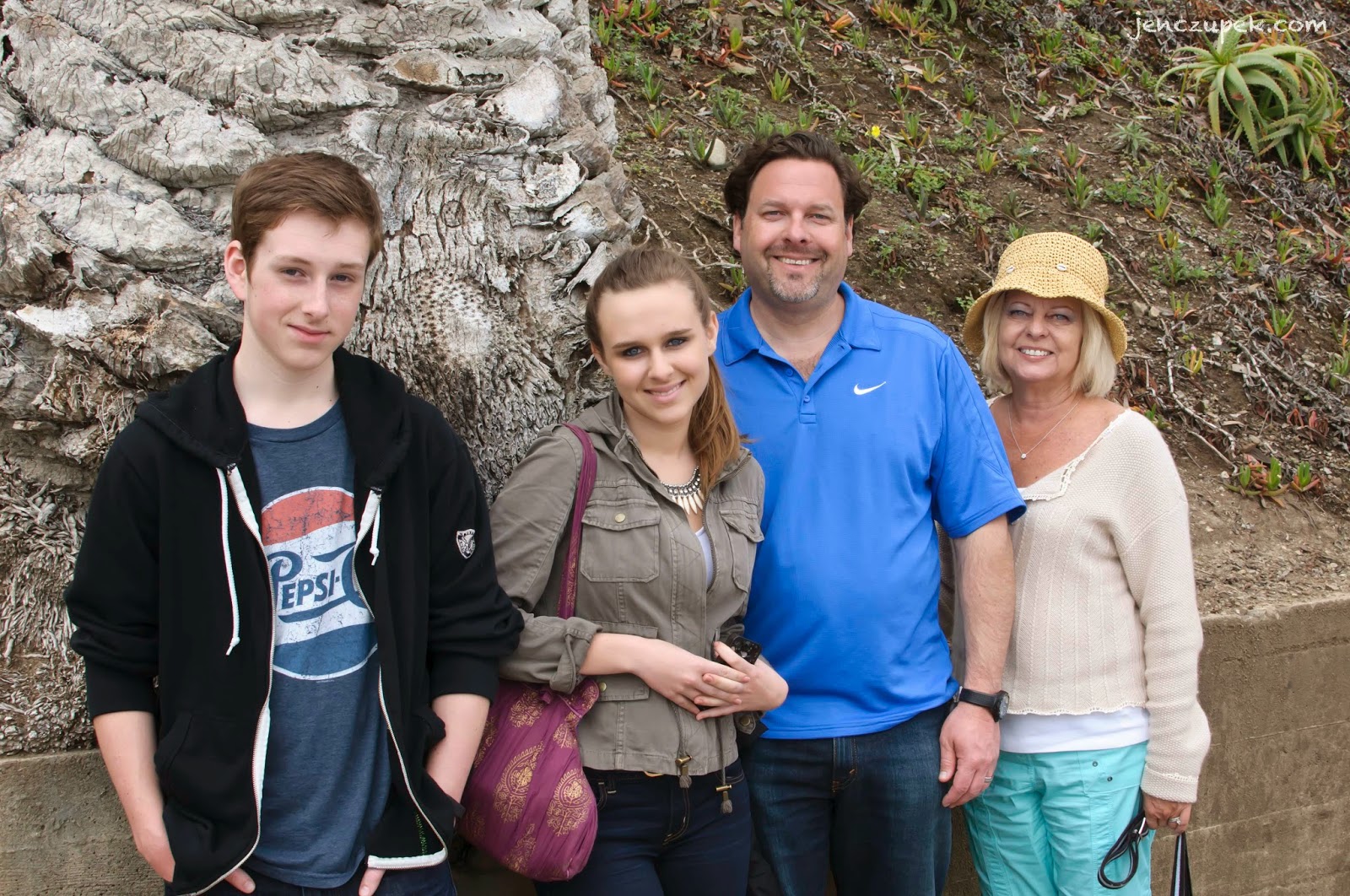 The woman can shop like none other. We walked into every store on the island. I don't exaggerate. She also can sniff out a glass of Chardonnay from a mile away regardless of the time of day or her locale. 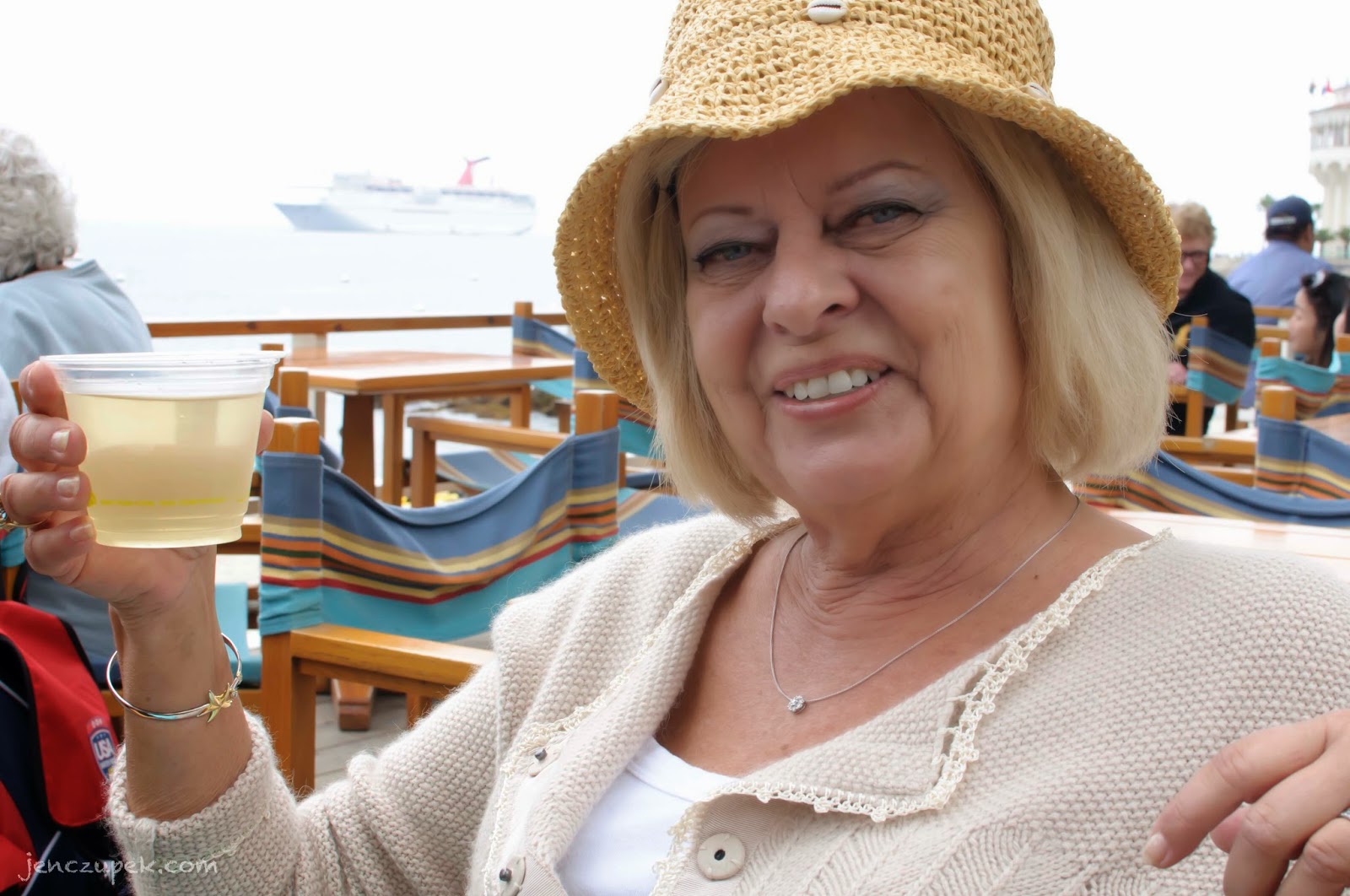 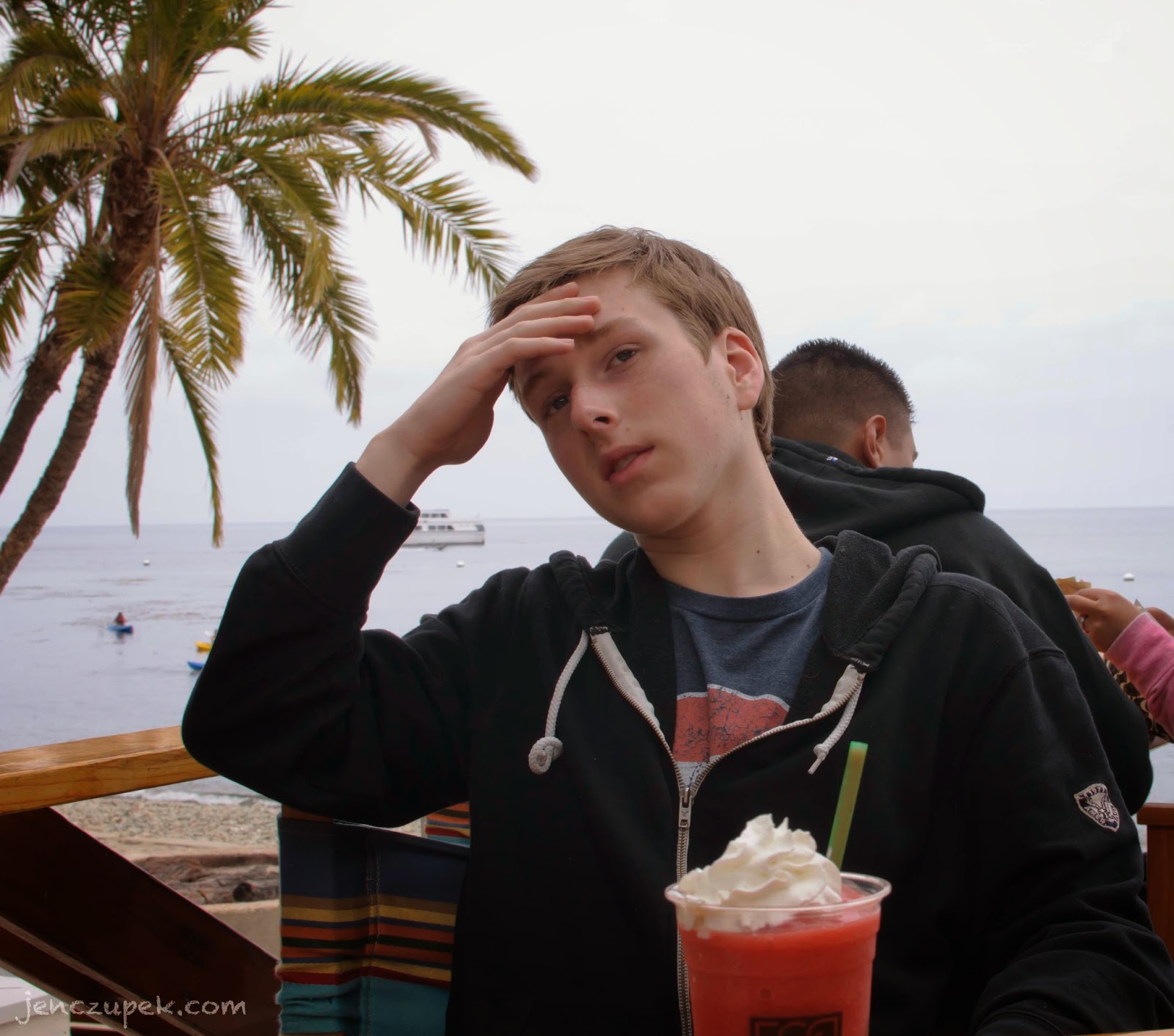 Somebody stopped feeling it. This moment marked the beginning of the end of vacation for my poor kid. Why is it that every family consists of at least one member who comes down with a vicious cold on every vacation? Or is that just my family, and this pathetic looking child? If only it were just a brain freeze from his (virgin) strawberry daiquiri.

The art on the island didn't disappoint. 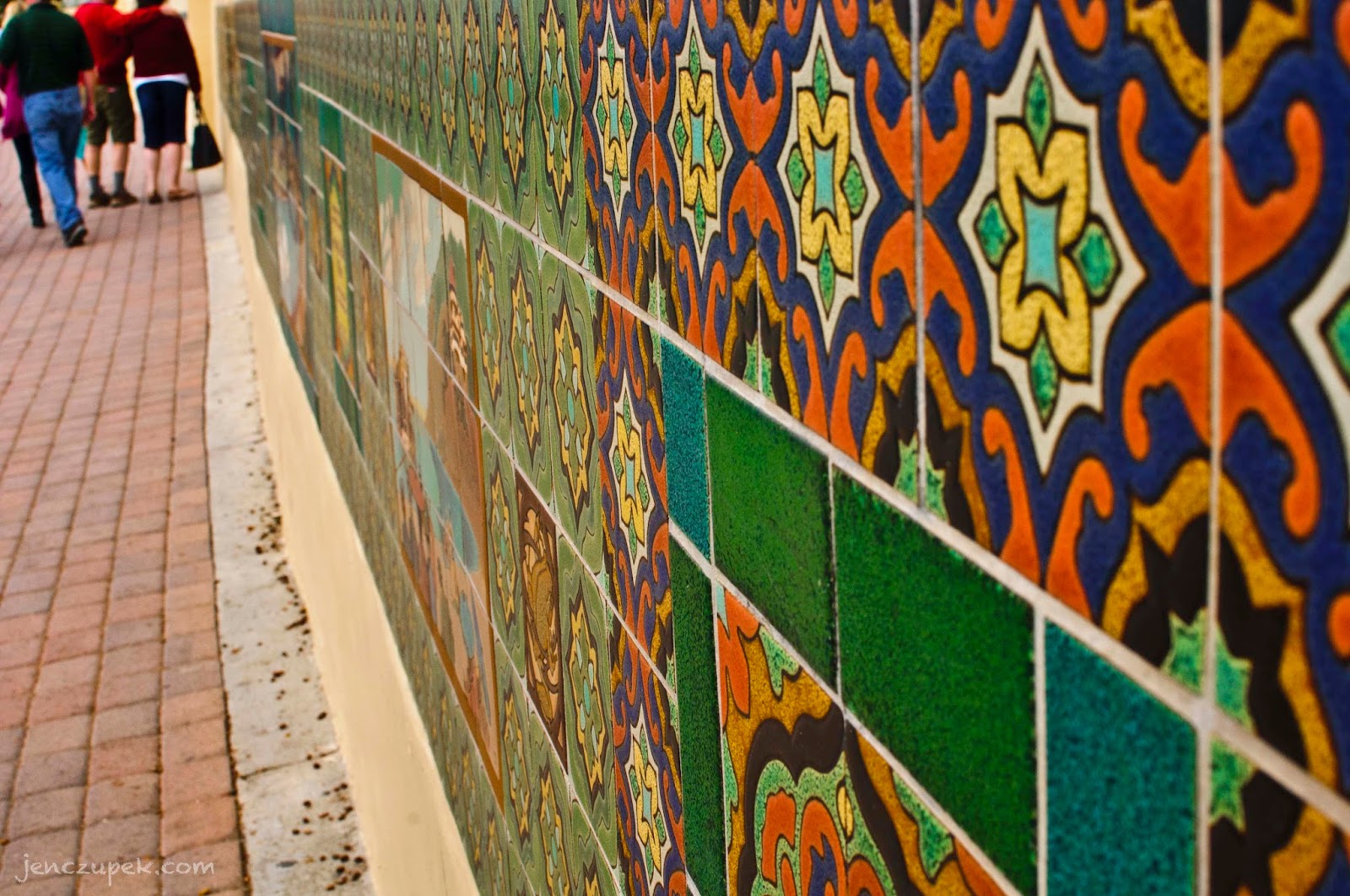 Colors lined the sidewalks, and funky metal decorated walls on some of the local's abodes. 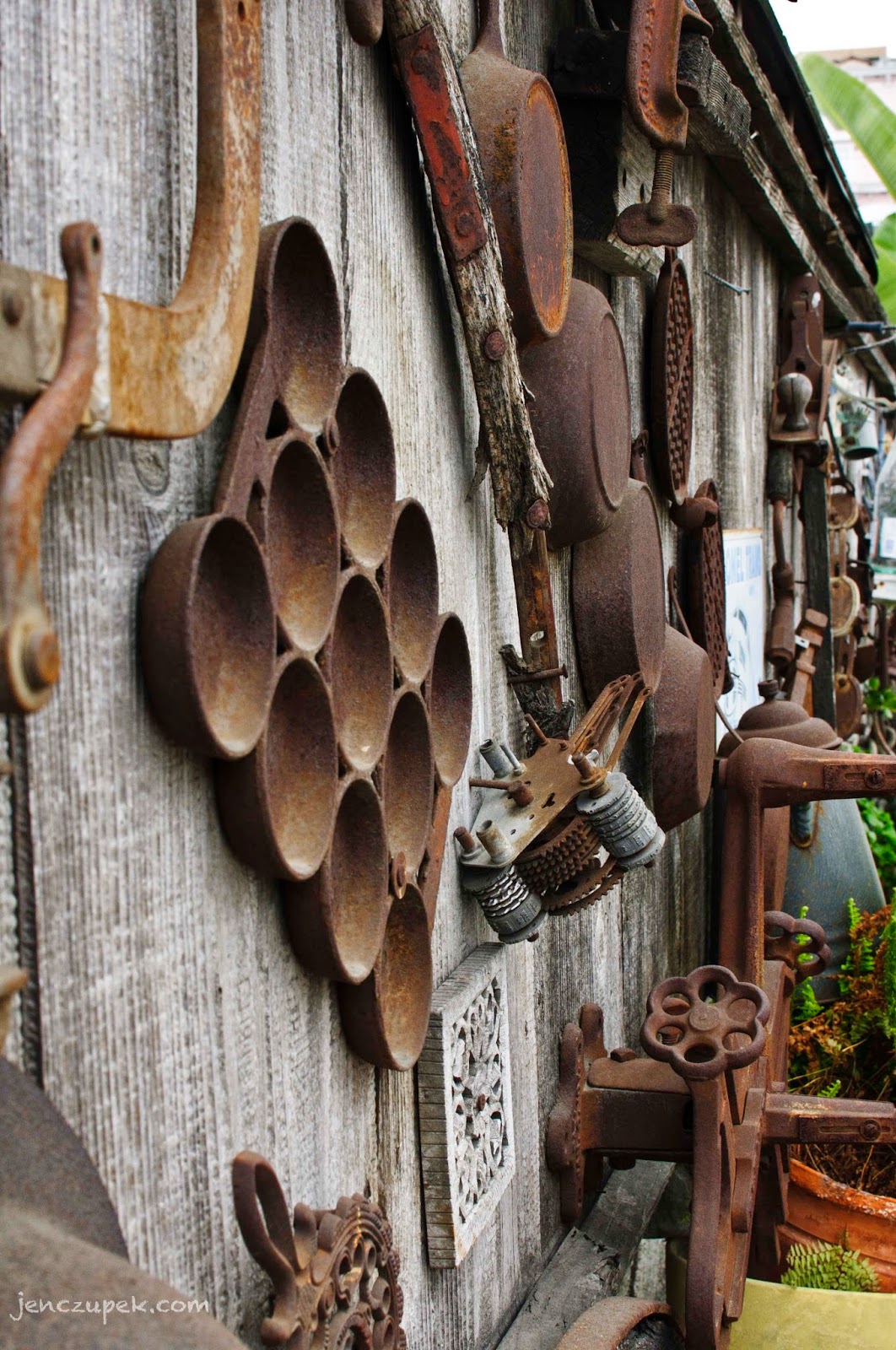 We decided that the island is cool and all, but taking the day ferry left us with little time to explore beyond the initial touristy section. It would be much more interesting to stay overnight for a couple of days. See that trail up there? In the background, behind the blue boat house? 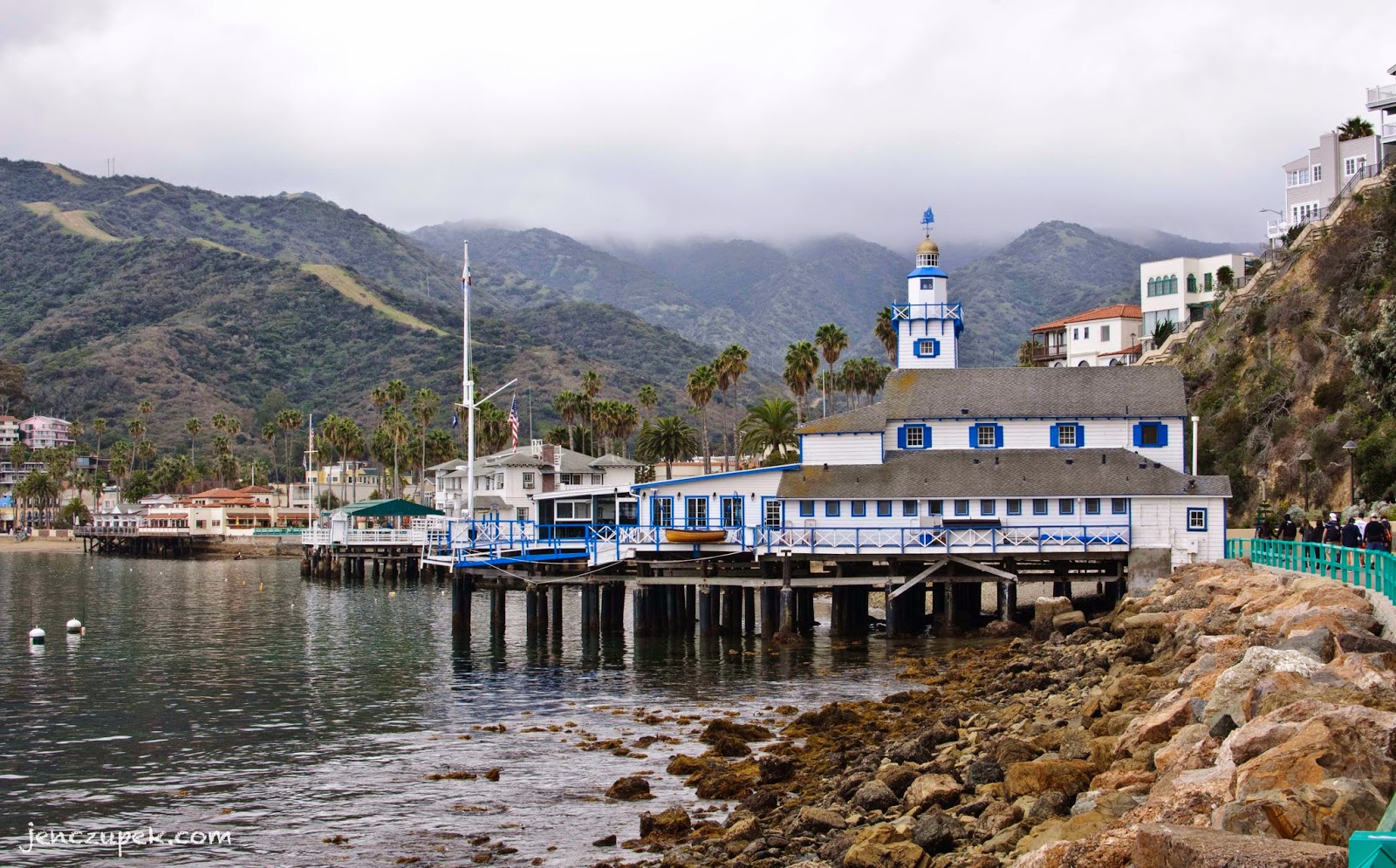 There's an incessant itch niggling at me to get up there and see where it leads. To absorb the 360 degree views from the top of that mountain. To explore the flora and fauna. To just sit and breathe in the ocean air. Someday.

Nah. Instead, I'll suck it up and thrive in twenty-four degrees and three more inches of snow. Come back Thursday and we'll go on a walk through the Crystal Cove State Park and from our rental condo down to the harbor in Dana Point.