Several months ago after dropping the boy off at a hockey rink north of us, Mr. Musky and I popped over to Maggiano's for some snacks and drinks before puck drop. Things work out nicely when the game is in a relatively populated area and we can grab a quick bite to eat - it's like date night, but not. Instead of ending the night snuggled on the couch watching a movie, I cling to him in the ever present fear that our kid will get jacked into the boards landing in the hospital with a concussion. Or with a broken collarbone, like two of his teammates this season.

Why is it that the worst pervades my thoughts when watching my kids play sports? Will that ever end?

That night we bellied up to the bar which I absolutely adore - it means that we're kid free for the night and I pretend we're 24 again. Until I look down and see wrinkles on my hands. What is up with that? Anyway - I asked for the drink menu - something I do every time I sit at a bar, even if I know I'm ordering a standby or a classic. You never know when something might be worth trying, right?

This time the name alone caught my eye - the Elderflower Collins. I LOVE elderflower liqueur in the springtime, even though it was the dead of winter that night. I knew that a "collins" would involve fizzy something and be served in a narrow, upright glass. But when I read Prosecco on the description, I balked in fear of the drink being overly sweet.

I asked the bartender about the sweetness factor, and he said that the Aperol balances it out. Not familiar with Aperol, an Italian apéritif made with bitter orange, gentian, rhubarb and cinchona, I decided to go for it.

Did you just enter the Wikipedia rat hole like I did? Yeah. It happens all the time.

The verdict? I loved it. And I knew instantly I'd be replicating it when the weather warmed up.

Last Friday proved Elderflower Collins worthy, but not the Magianno's recipe I found online. I clearly had to up the the volume. My collins glasses are much wider than those at Maggiano's. Shocker, right? Additionally, the original Maggiano's cocktail calls for Rhubarb bitters (HELLO SPRINGTIME!) but of the 10 different types I have, rhubarb is not among them. After smelling all the options, I decided to go with the cranberry and liked it just as well as the drink in the restaurant. 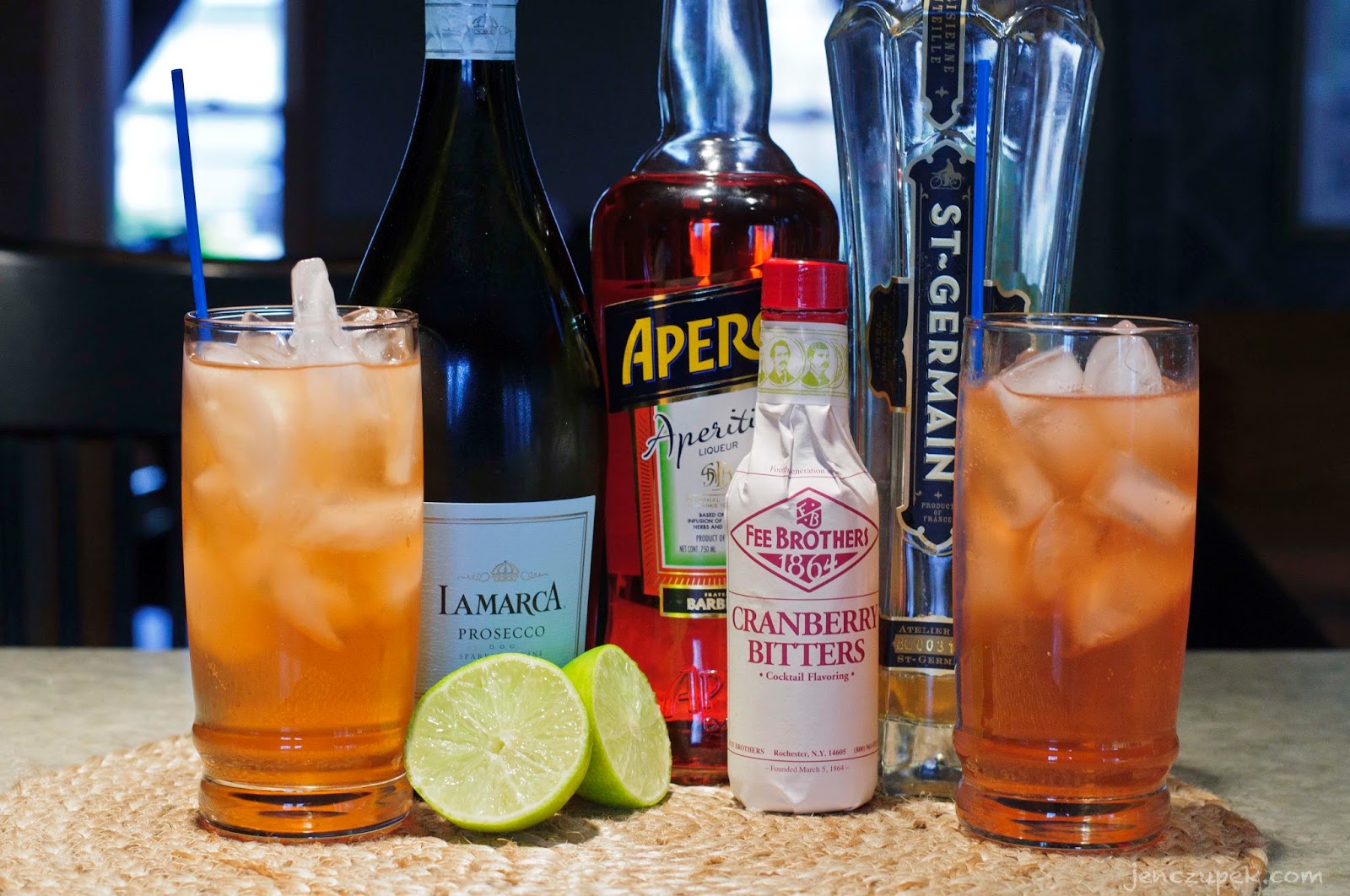 The pinkish, reddish, orangish hue tricks me into thinking it's a sweet cocktail, so the first sip is weird. And surprising. The second prompts me to thoughtfully consider the ingredients individually, and the third sip blends it all together and sells me completely. If you're looking for a refreshing yet not overly sweet drink for spring and summertime, this is a great option. Given that it's ALL BOOZE (except for the lime juice), it's an easy sipping drink. In other words, I don't tend to slam this one back quickly - I casually sip it and contemplate all those flavors since it's a little more complex than what I'm used to. Bitter drinks are funky, and I dig 'em.

If this is too bitter for you, you could leave out the Aperol or back it down. Try mixing it with with the Prosecco, St. Germain, bitters and lime, then add the Aperol little by little. If you don't have Aperol you could just add more bitters to mellow out the sweetness. Play around with it, and let me know what you think and how you adjust it for your tastes.

We cooked filets that night and while the grill heated up I threw together some little toasty appetizers. Spinach Toast fit the bill, mainly because I had the greens on hand along with some herbed goat cheese and pecans. This was fairly simple to whip up while I made the apéritifs and despite needing a jacket, the weather proved agreeable to outdoor sipping and nibbling. 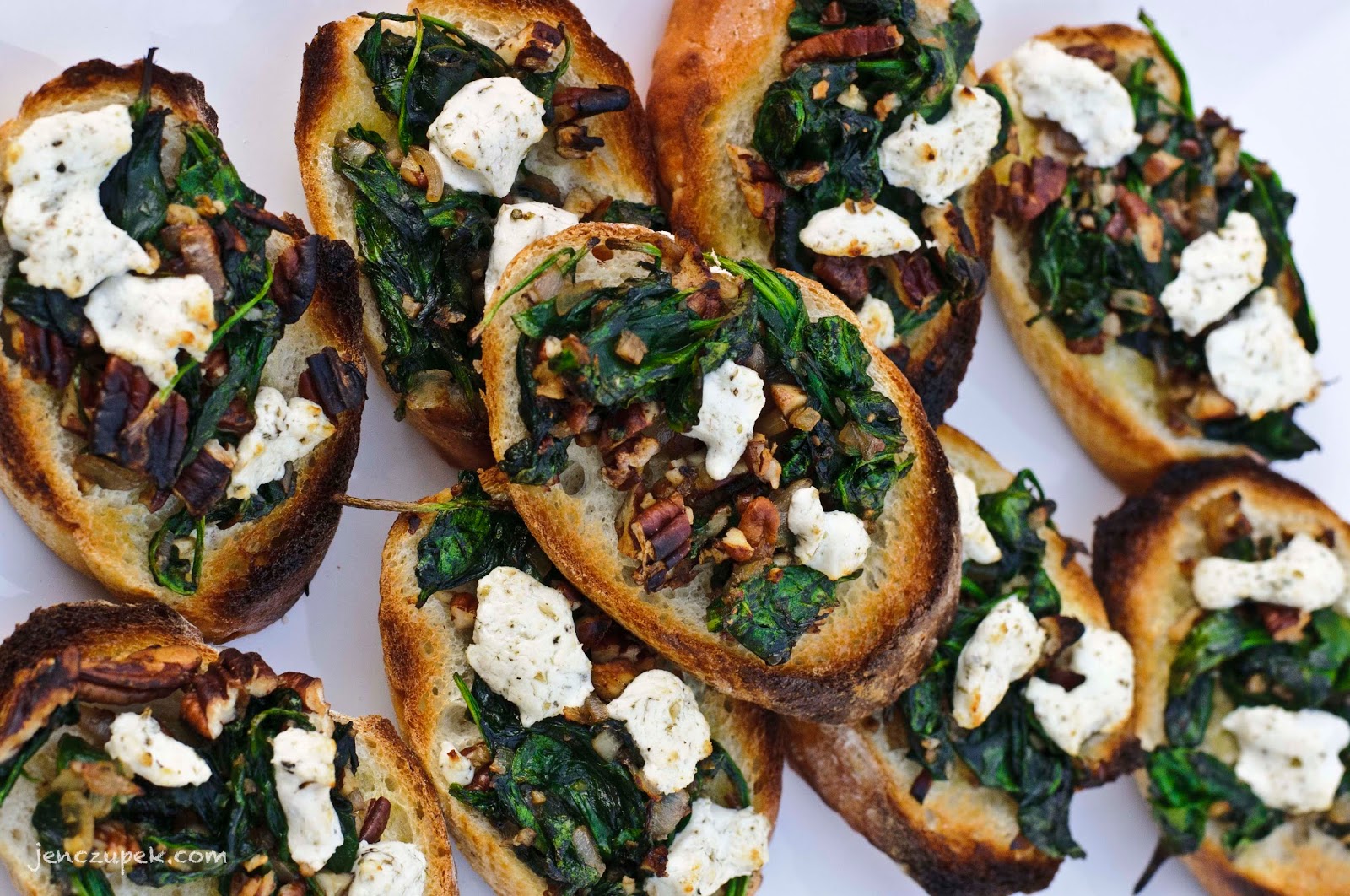 These savory bites were better than I expected and my people all liked them too. Shockingly, there were a couple left over. We apparently were all ensuring adequate room in the bellies for steak. Wouldn't you? 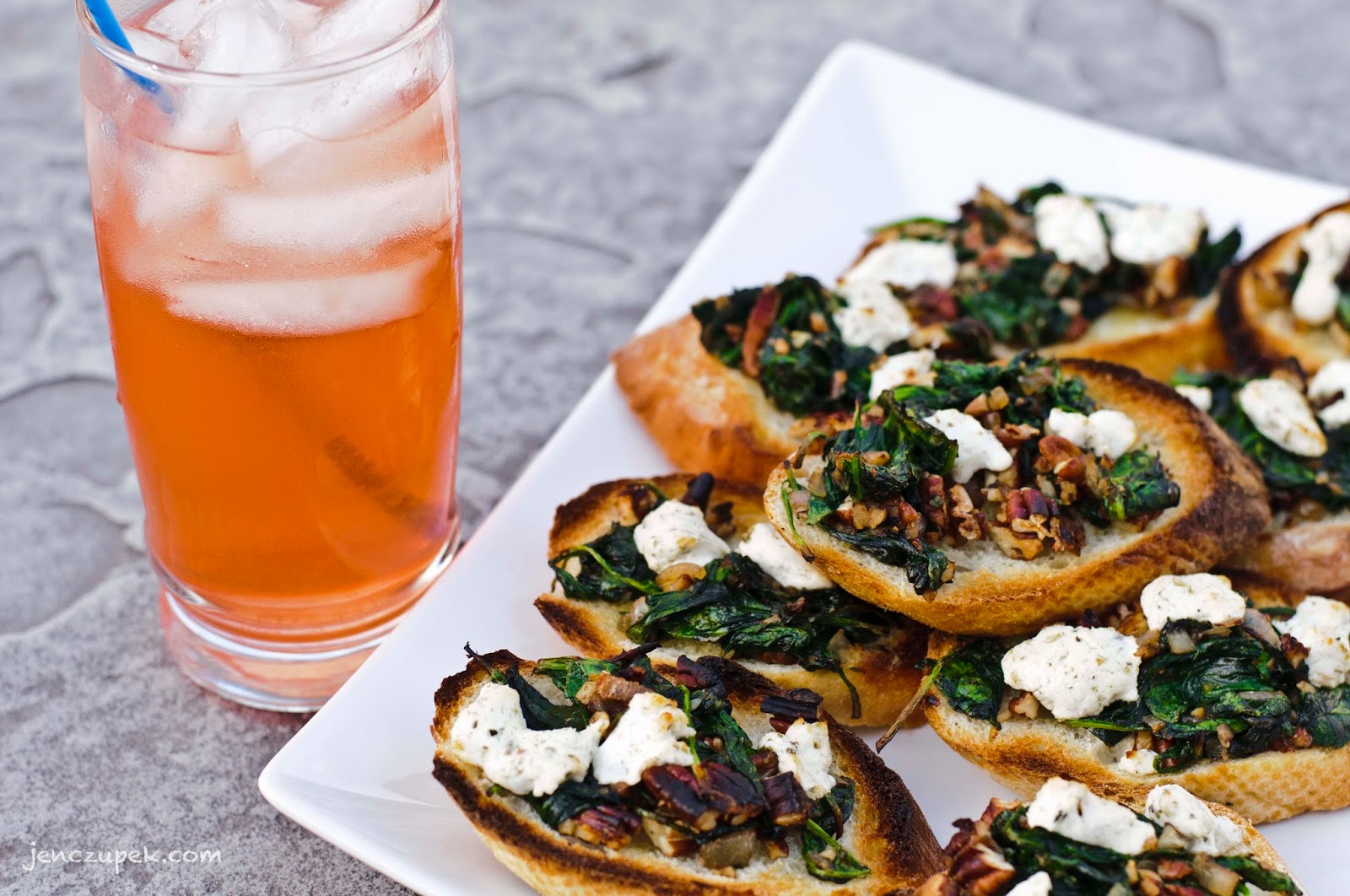 I've got some plans brewing to get together with a couple of lady friends tonight, and Mr. Musky agreed to do some grilling for us. Think he'll wear a tall white hat and chef's jacket?

Me neither. Have a great springy weekend.

In a pint glass, stir the first three ingredients together. Add the Prosecco, then pour the ingredients into another pint glass, then back to the original glass, then into a collins glass filled with ice. Reserve the remainder to top off your drink after sipping half of it.

Slice the french loaf on the bias into several rounds. Place them on an aluminum lined sheet tray and drizzle them on both sides with olive oil. Place the tray into a preheated 400 degree oven and toast the bread for eight minutes. flipping the slices after four minutes. Remove from the oven to cool.

While the bread is toasting, chop the shallot and add it to a pan over medium heat with a tablespoon of melted ghee, butter or lard. Sauté the shallot for three minutes, then microplane the garlic into the pan. Add the spinach and stir to wilt it, adding more fat to the pan if the spinach sticks. Continue stirring until the spinach is all wilted, and remove from the pan to a bowl. Toss the pecans into the pan and stir them around to release their natural oils and emit a nutty scent. Remove from the heat and add them to the spinach mixture.

To assemble the toasts, top each round of bread with a few tablespoons of the spinach mixture. Top with dollops of the goat cheese, and put the toasts back into the oven under the broiler for a  few minutes. Watch them closely and remove them when the goat cheese is slightly melted but before the toasts burn. Remove to a platter, sprinkle the lemon zest over the tops and serve immediately.