Spring announced itself forcefully last night as we held our first 2015 family convention in the basement under the warning threat of tornadoes. Here's how it went down in our group text: 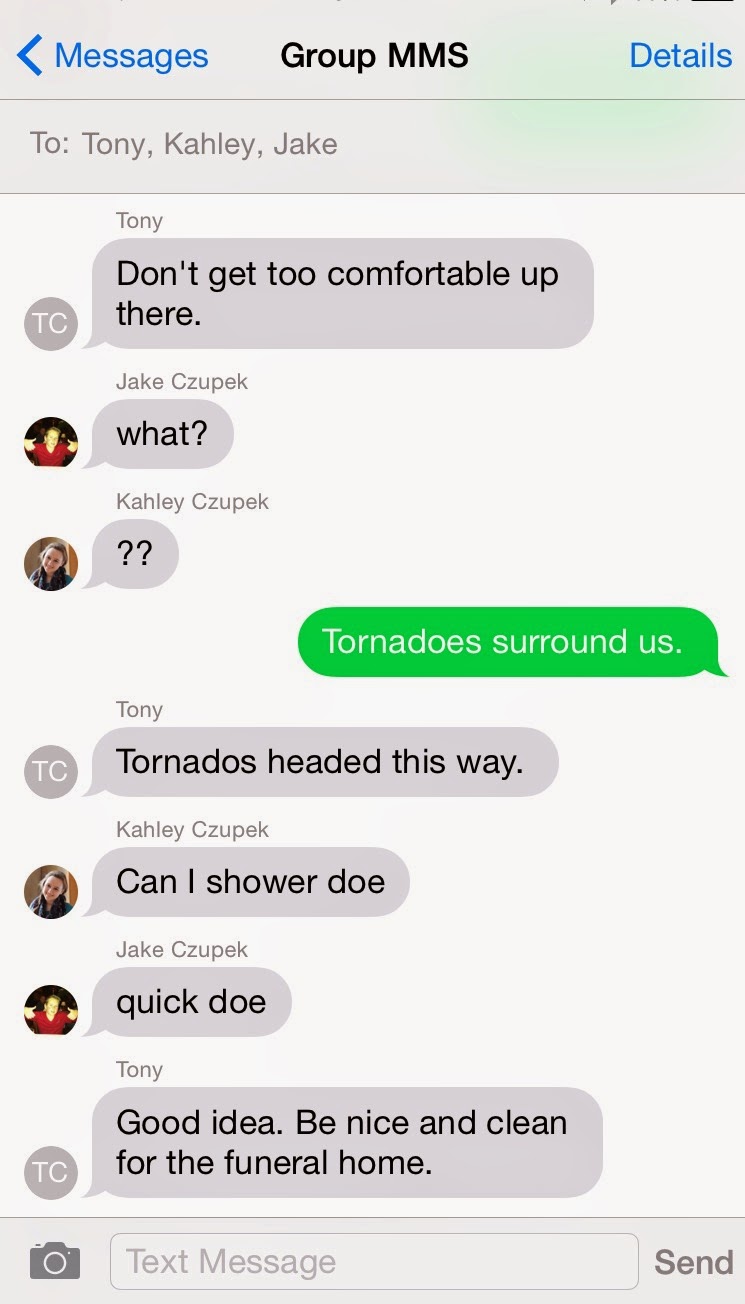 Despite devastation to the north of us, personal hygiene, ghetto speak and dark humor prevailed.

Since I was a child, recurring nightmares of being caught in a tornado haunt me. As a kid I was like Dorothy in my slumber, flying along with all my enemies cackling evilly as our brick house spiraled into a magical technicolor land. Once I had kids my dream morphed into a mad frenzy to get all my lovies into the basement, only to find that we forgot the cat. I run upstairs, locate Madison, and chuck her down the stairs. Then I realize we forgot the dog. I find Miller, agonizingly coax him downstairs, and settle in for the storms to hit. Then the littles start wailing because they forgot their blankies in their rooms. Can you imagine babies without their blankies? Living hell. So I dash back upstairs to get them, heart pounding out of my chest. On my final descent to safety the roof blows off as I leap down the stairs, which start to give way, so I madly cling to the rail in sheer terror as my surroundings fly up into the vortex, my legs rise above my head, the stair rail starts to break off from it's foundation, a bloodcurdling scream erupts from my lungs...

I wake up drenched in sweat.

After last night's drama I knew the nightmares would visit me. This time it was just Mr. Musky and me in the car driving on a highway toward a menacing, wedge shaped funnel cloud, unable to escape due to traffic in both directions. Just like all the news reports showed last night. I keep asking him in my dream, "Are we dead? Are we dying?" as debris rockets toward us and a jackknifed semi careens our way.

He replies simply and calmly. "No," as our car begins levitating and spinning round and round, traveling a mile before it gently lands on an overpass. We survive.

I wake up panting and sweating, yet again.

I don't make light of spring storms. We all spent a good hour in the basement last night, along with shoes and socks, car keys, wallets and purses, plenty of water and fresh popcorn, pillows, candles, medicine, photo albums, flash lights, dogs and blankies. Tornadoes will always freak me out, even though I wasn't in Plainfield when the F5 ripped through town in 1990, creating a path of destruction and terror that folks around here remember all too well. My parents lived in the area back then and drove home from work in that storm, narrowly avoiding tragedy.

I hope you'll join me in keeping the folks in Northern Illinois in your prayers. They're going to need it.

Despite the storms this weather warm up inspires me to start creating lighter fare, especially for lunch. A week or so ago I whipped up one of my favorites, Tuna Salad, which has certainly evolved over the years just like my tornado dreams. Once upon a time I opened a couple of cans of Starkist, plopped a glob of manufactured jarred mayonnaise into it and called it a day. Now I chock it full of vegetables, fresh herbs and homemade remoulade, and it is absolutely divine. 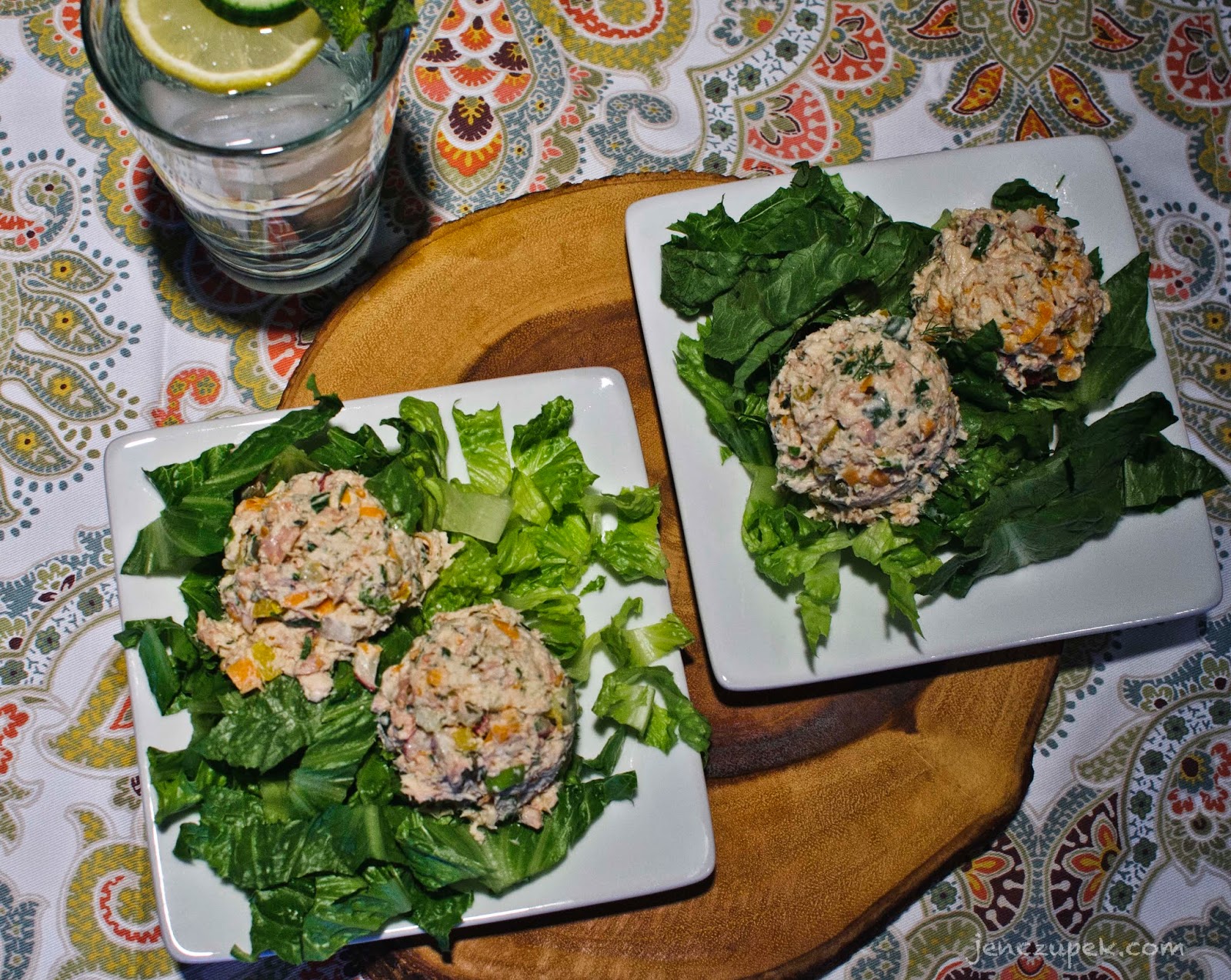 Twenty years ago Mr. Musky didn't have a clue that he'd become an official taste tester some day. If he'd known, would he still have said "I do?"

I'm thinking yes. Mainly because he typically likes what he tastes. A couple of weeks ago he came home from work and went straight for the fridge to pull out some tuna salad.

Curious, I questioned his snack choice. "Didn't you have tuna for lunch, hon?"

Since he complemented it so profusely I thought I'd better write down how I made it since I never seem to make tuna salad the same. Here's the Musky approved version. This tastes good immediately after you make it, but it gets even better after the flavors meld in the fridge for a couple of hours.

Being that we consumed this at lunchtime there was no aperitif involved. But I did mix myself some tasty water. My local little produce store had this sitting out one day, and with the first sip I was smitten. It's a refreshing alternative to plain old H2O. 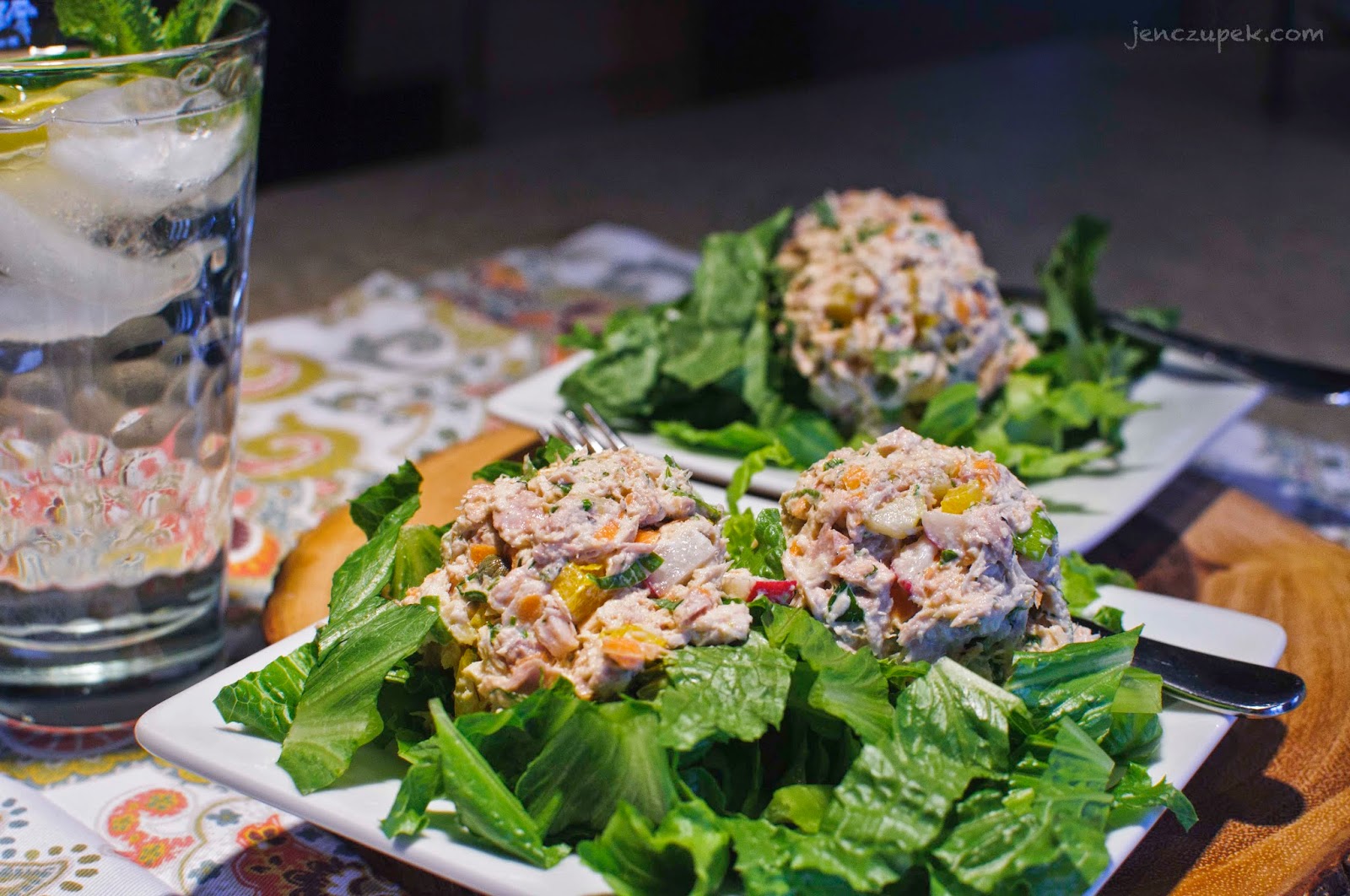 Enjoy and embrace the Spring, but take those car keys to the basement with you!

Place ingredients in 2 quarts of water and let steep for 15-30 minutes. Pour and enjoy!

Drain the tuna and flake it into a medium sized bowl. Add the remaining ingredients and gently stir to combine. Serve on a bed of chopped lettuce, in a pita, on crackers, in a tortilla wrap, or make a sandwich. For tuna melts, slightly toast an English Muffin, top each round with a scoop of tuna, then top with your favorite melting cheese (swiss or gouda is awesome). Place under the broiler and watch carefully until the cheese is bubbly and begins to brown.

Put first five ingredients in a blender and mix. SLOWLY with the blade running, drizzle in the olive oil. This will take a few minutes - don't rush it or your sauce will not come together in a mayonnaise-like consistency. If using a blendtec blender, hit the speed up button twice for the right velocity. You will need to run speed 2 through an entire cycle, then again for half a cycle to allow for enough time to slowly pour all of the oil into the blender.

The remoulade will keep for a week in the refrigerator and is awesome on sandwiches.