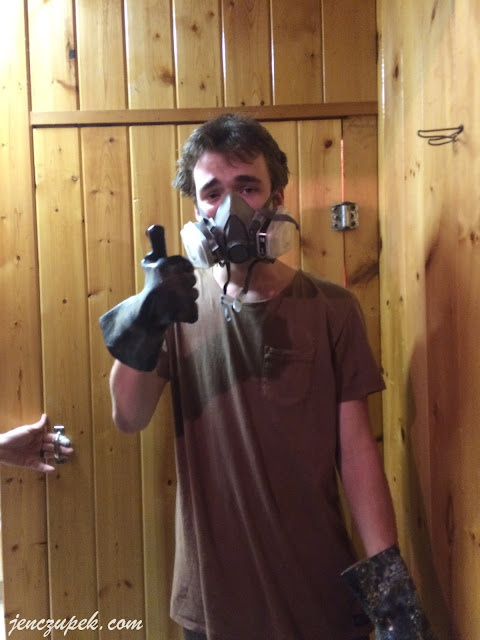 This pic arrived to me via text a few weeks ago with the following request from The Princess: "Please make cookies for this guy. He hand scooped my campers' poop out of their severely clogged toilet."

That poor, unsuspecting boy. Without hesitation I sent cookies back to camp with her after she romped around the chain with the girls in the rain. Mid-week she sent me a video of him thanking me as he oversaw the ropes course. Later that day I received this text:

"Joel ate your cookies and goes: 'Ughhh they were so good! Can I meet her?! Can I marry her?!'"

The next day I received a Facebook friend request from Colin. Not knowing this young gent from Adam, I looked to see if we had any mutual friends. Lo and behold, he works at Chippewa Ranch Camp too. I accepted.

Later in the day I received this one: "So your new friend on Facebook, Colin, says: 'Kahley's Mom has got it going on. She has two blogs? Wow. She's so deep. OH MY GOD! Bacon wrapped onion rings? She's just fantastic!'"

Meet Colin.
I spit my coffee out a little. That song..."Stacy's Mom?" We play that station on Apéritif Fridays because it strikes an acceptable balance between country, Eminem, Nicki Minaj and classic rock so all family members remain in the kitchen and engage in Friday antics.

So when she asked if Colin and Joel could join in on Sunday's fun, the answer was a no brainer. I simply couldn't wait to meet my fan club. It's just a shame that when the introductions were made, I tripped on my shoe, fell into Joel, my mouth smashed into his bicep and naturally, he had a white T-shirt on, so I schmeared red lipstick all down his sleeve.

Kahley's Mom most certainly does not have it going on, but they met the real me in the first 5 seconds. We were off to a stellar day. In due time, I got to know the real Joel and Colin. 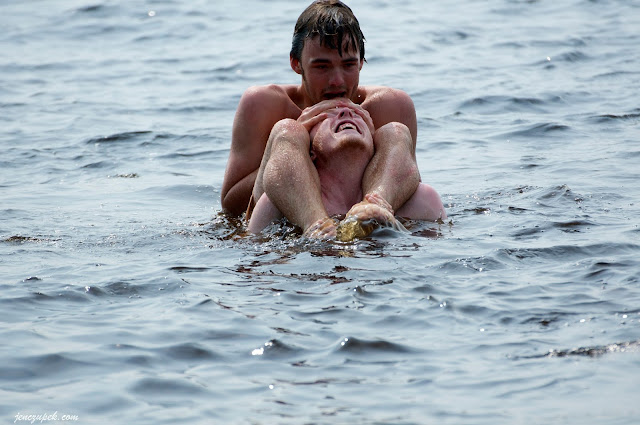 Along with the girls, they are as sweet and quirky as the best Chippewa internationals I've ever met. 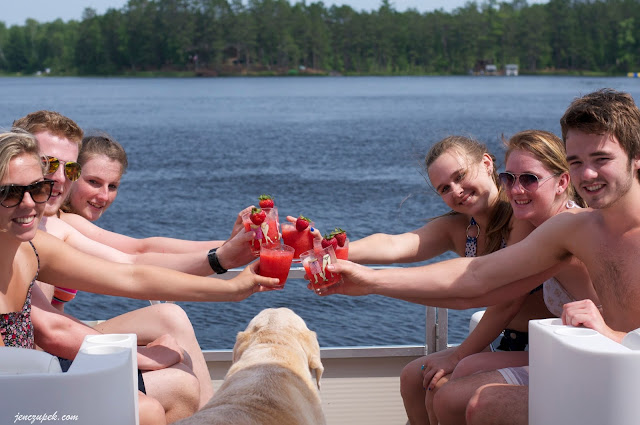 And that's some really, really big shoes to fill. Some gals from New Zealand, both now married, forever hold a most special piece of my heart. The international staff contributes to the magic of Chippewa. As campers our kids met young adults from around the world and learned about other cultures. Now as a counselor, Kahley is making international friends for life. 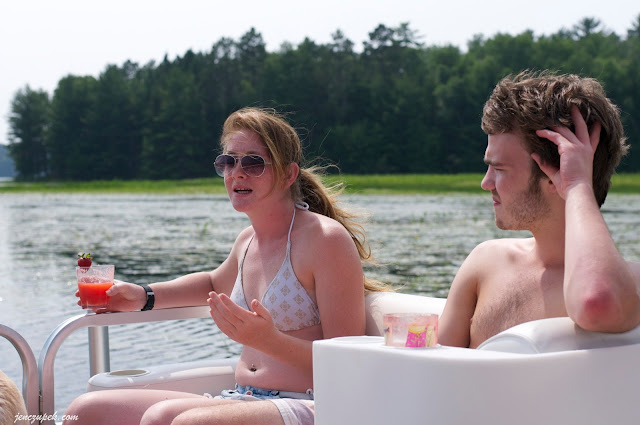 These kids come to camp to experience America. 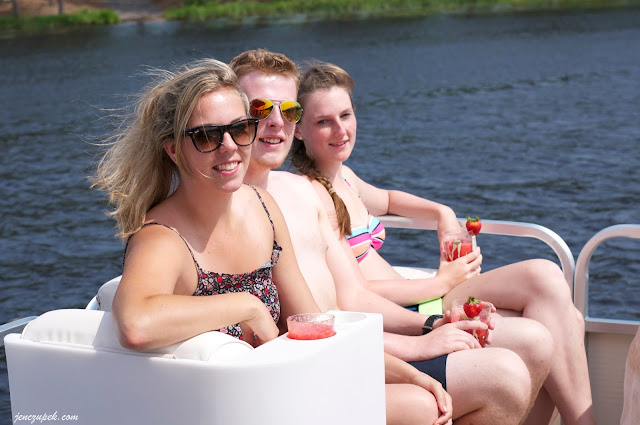 Yes, the summer job is a means to that end, but when we invite them into our home to hang out with us, we are really giving them a glimpse into how we live. What we do. How we interact. 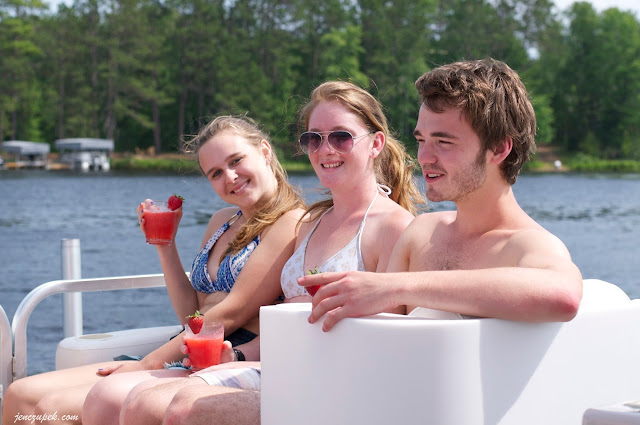 We wasted no time. Since the kids ate lunch in town, we immediately headed out on the boat for some Sugar Camp fun. Scotland in the house! 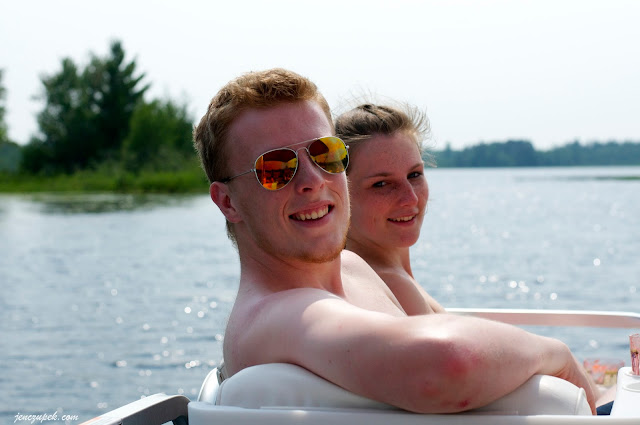 Colin and Nicole live on opposite coasts from one another, but it only takes about an hour and a half by car to get from one side of Scotland to the other. That's a shorter ride than for me to go see my mom. Colin shared a little insight on our way out to the beach. "Did you know that the entire population of Scotland is about half a million people less than the entire state of Wisconsin?" 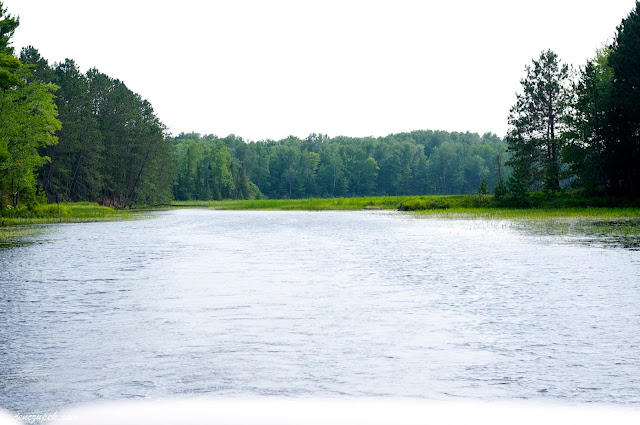 I just stared at him dumbly. No - I didn't know that. And it took me quite awhile to get my head around it. With 12 million people in Chicagoland alone, I'm thinking I'd rather like the absence of humanity in Colin and Nicole's home country.

We swam at the beach for awhile, observing some universal facts. Playing "chicken" in the water spans the globe and generations. It is forever fun. 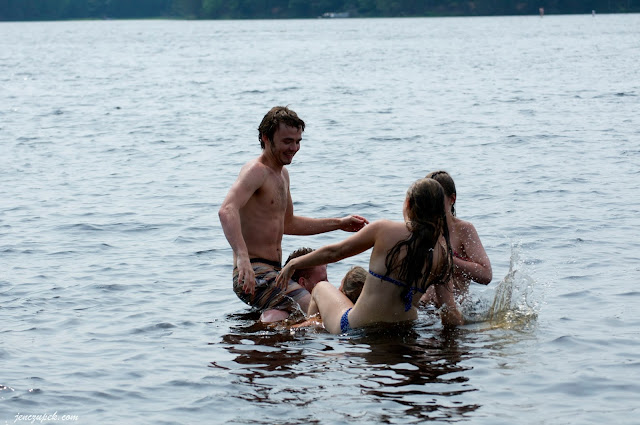 Put a boy in a lake and he will find an underwater treasure. 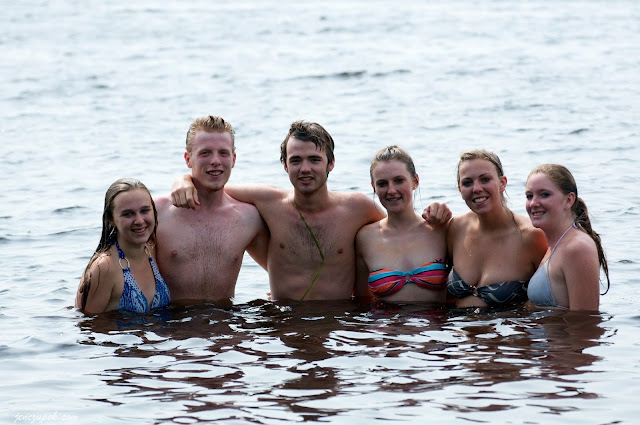 We made our way back to the cabin, and one by one they showered. Kahley provided the boys with her own worldly lesson: 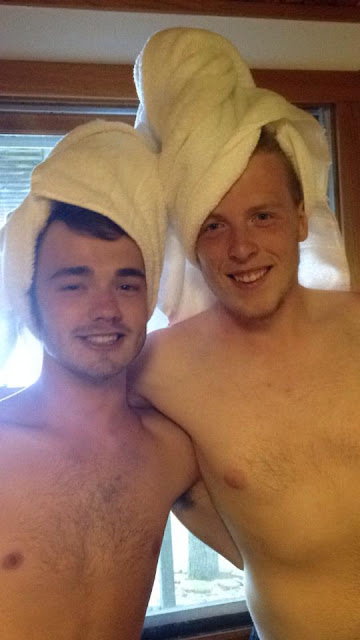 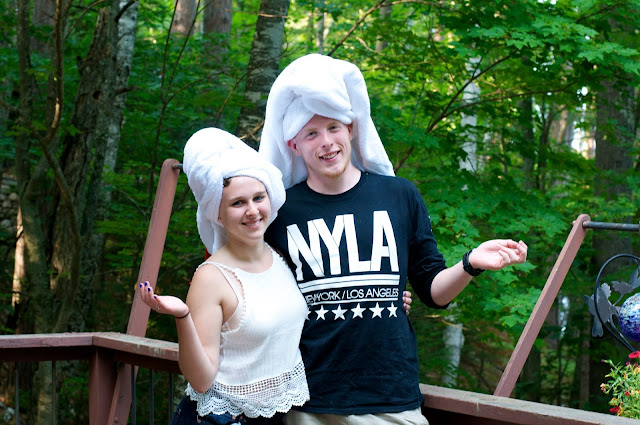 I hollered downstairs to them when dinner was ready, buffet style, in the kitchen. I truly expected them all to grab a plate and head out to the deck or back downstairs to eat. But one by one, they filled a plate and took a place at the table. They all sat down together and chatted over dinner. 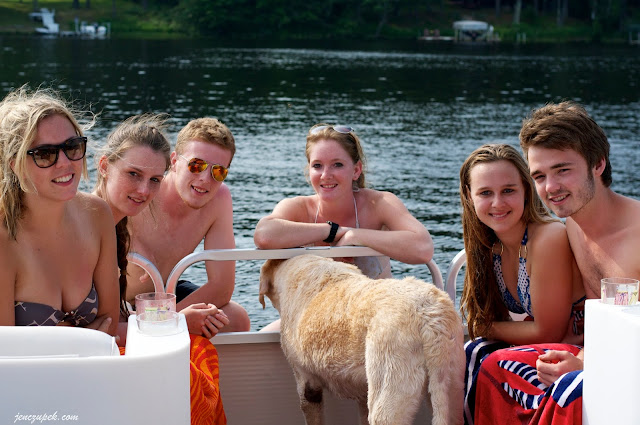 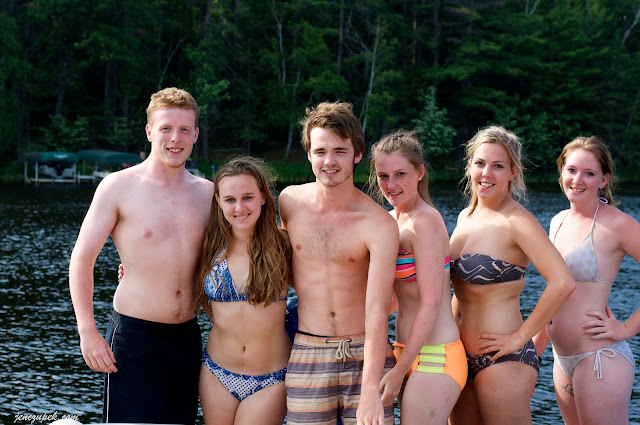 In fact, the cell phones hardly came out the entire day, and when they did, it was for this: 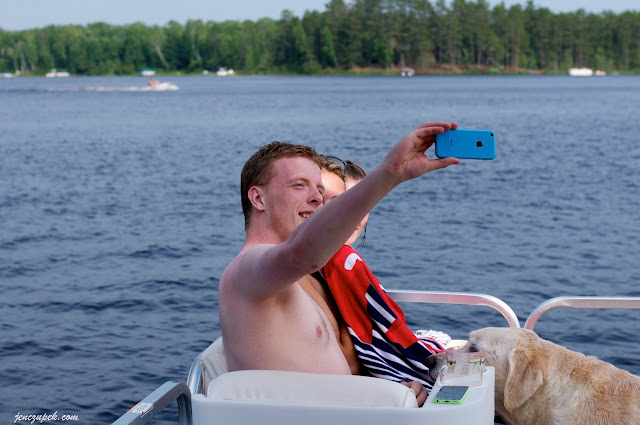 And who's to argue an effort to capture life's best little moments? Not I.

All day and into the night they talked to one another. Engaged. Laughed. Made memories. They took the fun outside and at one point the dock morphed into an all out dance floor. Hopefully our neighbors can tolerate a night of interrupted peacefulness for a "cheerleader you ring my bell" song.

Or some such thing.

The boys owe me a performance of the lip sync they performed the first night of camp. You can bet they'll be invited back so I can see the act. Not to mention that they are all just so sweet, funny, entertaining and genuinely good people. The kind of people I love.

I've said it before, and I'll say it forever. Overnight summer camp is one of the best experiences you can offer young, impressionable kids. It teaches them so much more than you can ever imagine, and my kids continue to thrive in the camp environment. It's a legacy that I hope continues with my future grandchildren, and I know my kids will look back fondly on their days at camp, grateful we opted out of travel sports teams and expensive family vacations. Their camp families help Mr. Musky and me in shaping their life views, independence, perspectives on the world, important character traits, and ability to live in unique environments with people they'd otherwise never even interact with.

And to the staff Mums and Dads abroad? Be proud. You all raised amazing, kind, grateful people who make my heart go pitter patter. Before they all left everyone thoughtfully and sincerely thanked Mr. Musky and me for hosting them. Back at camp, Nicole gave me a big hug, stood back, stared into my eyes and declared: "I love you, American Mum."

I melted on the spot.