This year for the last time I enjoyed the experience of watching two kids go to the annual Homecoming dance at their high school. While I stood there with my sophomore first, in the blazing September sun, I reflected on how different it is to be the Homecoming Mom of a Son... 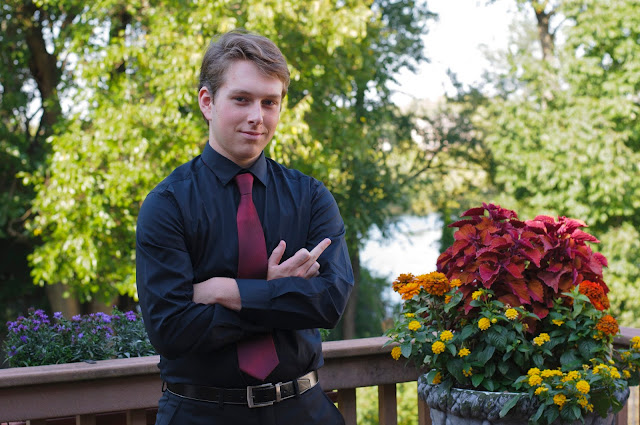 ...who could care two craps about the picture taking... 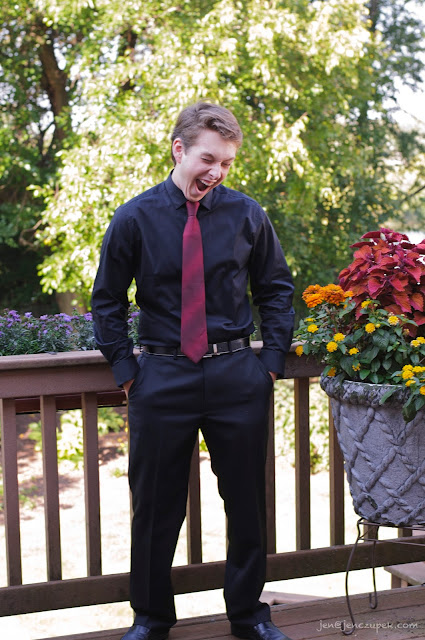 ...and is completely over it three pictures in. 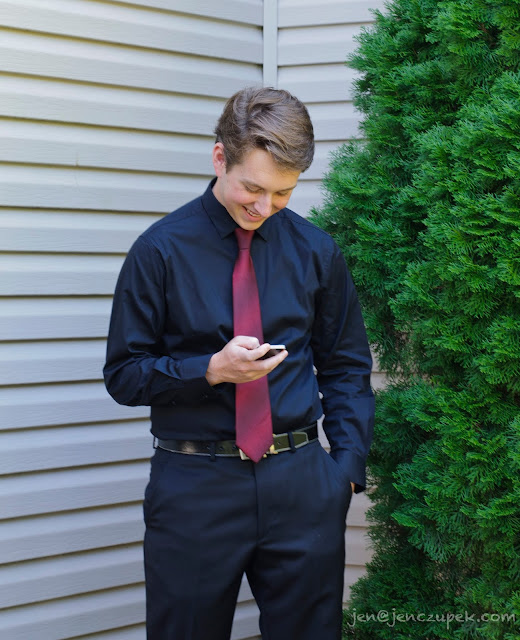 On the flip side, the mother of a daughter dressed and coiffed for homecoming is like none other.

Those daughter-moms are front and center, not exactly barking orders out to the group, but perhaps one notch lower in the form of aggressive directives for posing and manipulating adolescents for the perfect picture. 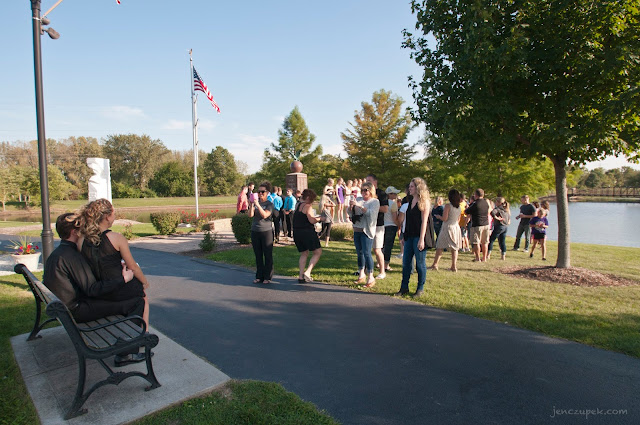 The daughter-moms line them all up, facing north, when the sun sits stubbornly in the southwest horizon. Knowing their faces will all disappear in the shadows, I chuckle.

And I don't. Because I know it's moot. The mother of a son attending homecoming has no say. None whatsoever. If she even tries to interfere with the mother/daughter dynamic, she'll be blasted. Or most politely, stared at, mouths agape, eyes rolling upward as they turn back to their beautiful little dolls dressed in heels they can't manage, hair plastered into intricate artwork, short dresses barley covering their bums.

The mothers quickly recognize their foiled attempts at the lineup, and immediately herd the group ninety degrees, so the blinding sun can squint all of their eyes shut because naturally, high school students dressed to the nines for a dance don't wear sunglasses. Not a one. Not that it would matter. The moms all want to see their kids' faces in overexposed pictures. Every single one, squinty eyes and all.

With the other Son-mamas, I take my spot in back. We aren't allowed to commandeer eye contact when our sons are involved. Because let's be real. Given the current homecoming uniform for boys, they all look the same if you remove their heads and just glance from the necks down.

Sure, some have longer legs and their clothes are slightly different, but for the most part, they all look the same. They hold their hands the same way. Their expressions are the same. 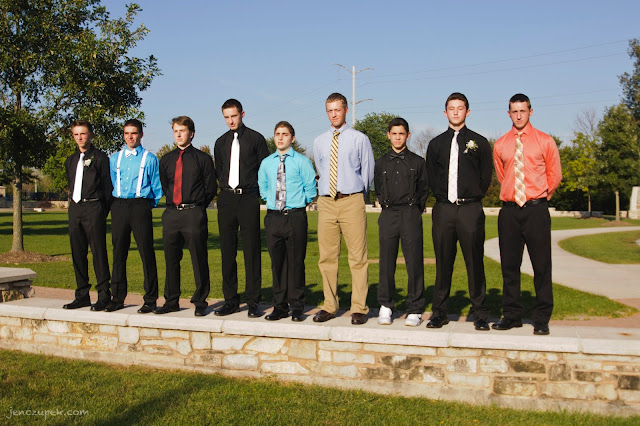 It's the "Let's just get this the hell over with before I stab myself in the eye" face. We Son-mamas gratefully take the backseat and sympathize. Let's do this as fast as possible because our boys find it torturous. At least someone comes up with a solid diversion tactic, and the boys eagerly leap. 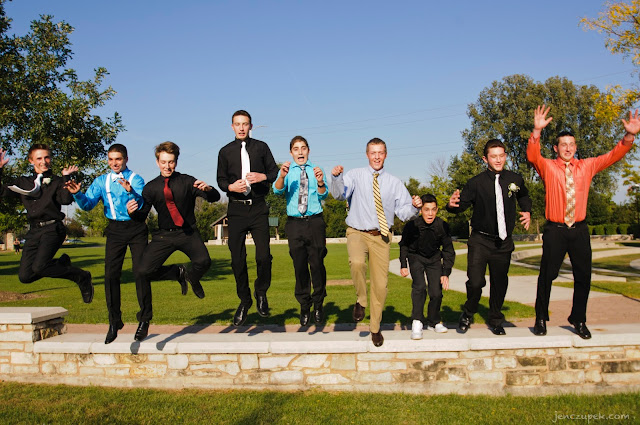 Another son-mom voices my sentiments. "I'm over this. Are we done yet?" I silently nod my head at her, agreeing wholeheartedly. We'll all be happier when they move on to dinner, blessing the god of air conditioning for respite from the warm September sun. 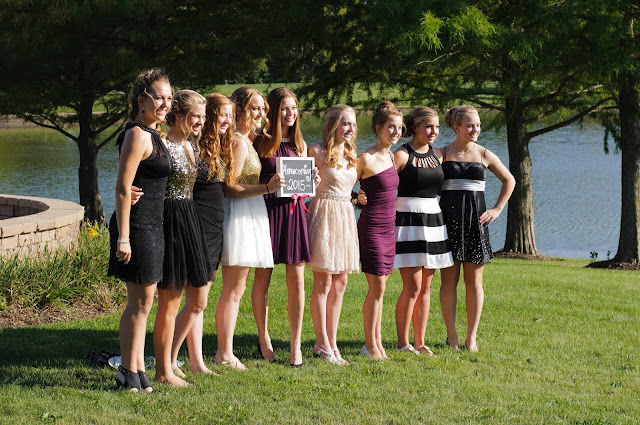 They take pictures as a group. Then solo. Then with each and every individual friend. Then with groups of friends. Then with different groups of friends. Then from the back, from the side, close up, full length, with the Homecoming 2015 prop sign, with the sign on the ground. Invariably someone is ALWAYS late to pictures, so it starts all over. The entire group line-up, again. The girls only, again. Then the small group pictures, then the twosomes. AGAIN! It's insane.

I found myself feeling slightly judgy, and mysteriously guilty. I understood the judgmental part, because C'mon, Man! We were at it for an hour, and I finally had to sneak off to ensure I made it home to meet Kahley's date. Mr. Musky was fishing with the guys for a week, the lucky dog. On my ride home, I couldn't quite put my finger on the feelings of guilt.

Within an hour, I understood. 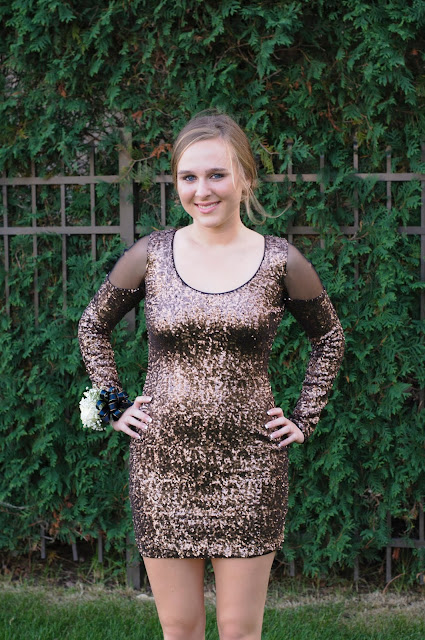 As I morphed into Homecoming Mom of a Daughter, I felt even guiltier judging the sophomore daughter-moms. I took enough pictures with Kahley and her date to fill an album. 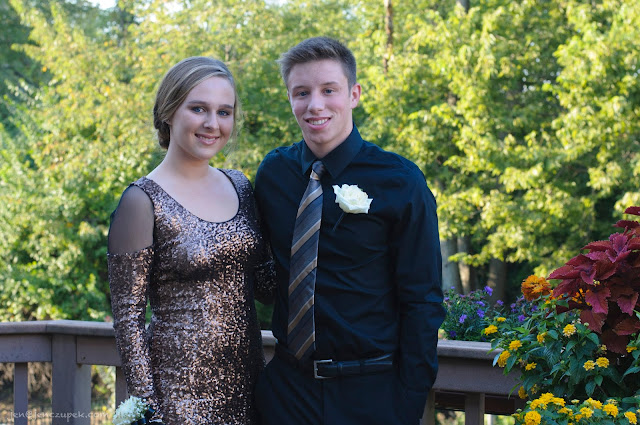 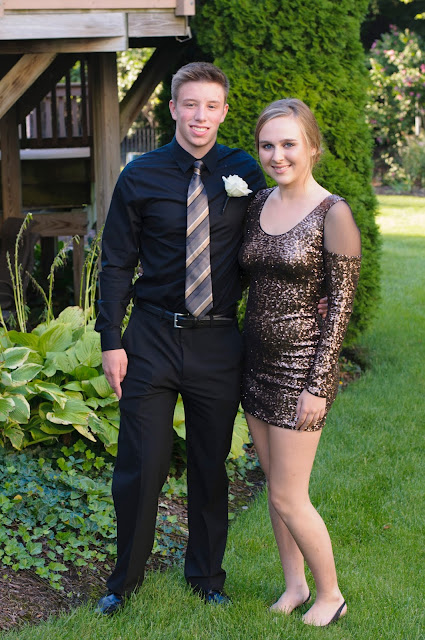 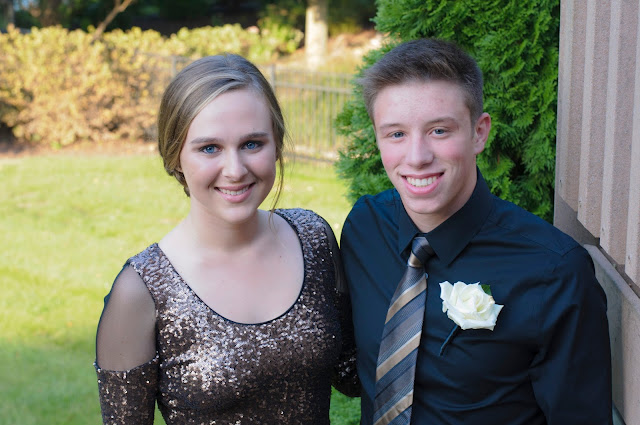 That poor boy. Couldn't I have sympathized, having just been the Homecoming Mom of a Son? Nope. We went to Kahley's friend's house, and he suffered through more. Suddenly I realized - I'm that mom. 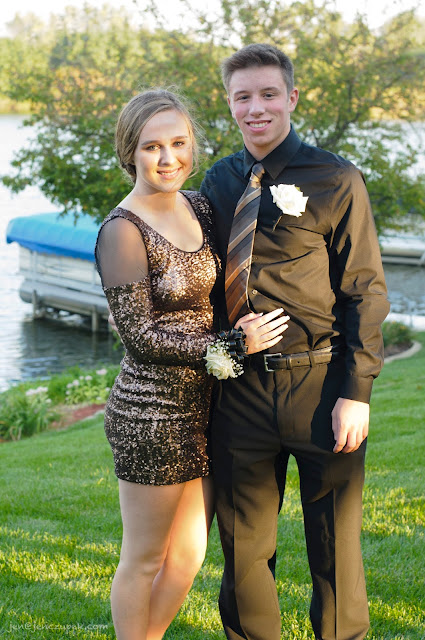 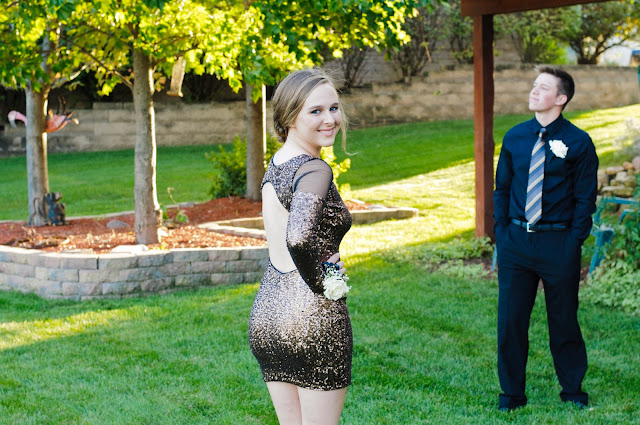 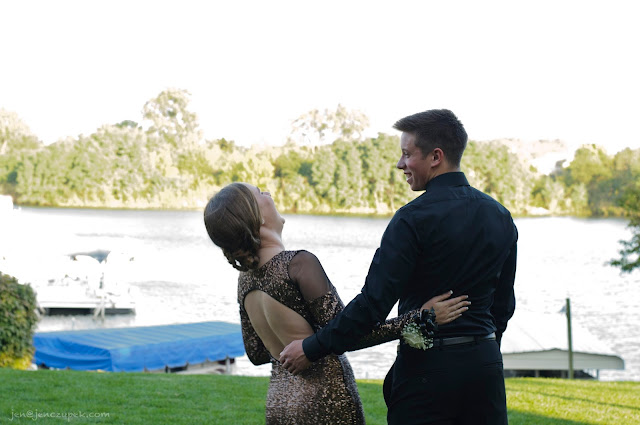 Others kids trickled in, and the shutter never rested. I took a picture of her with all of her friends, 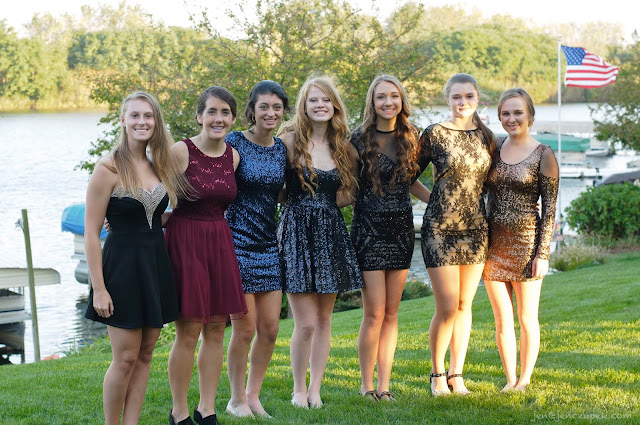 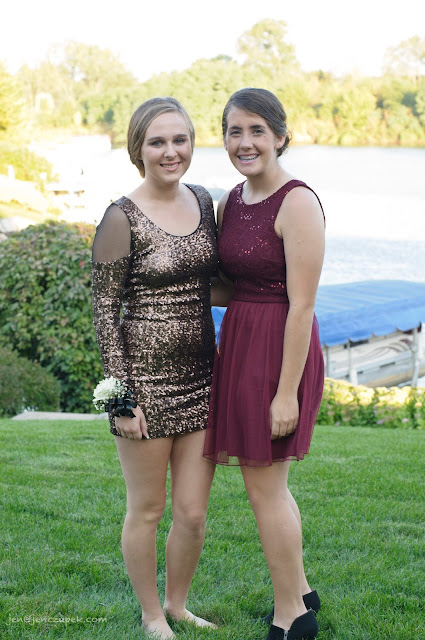 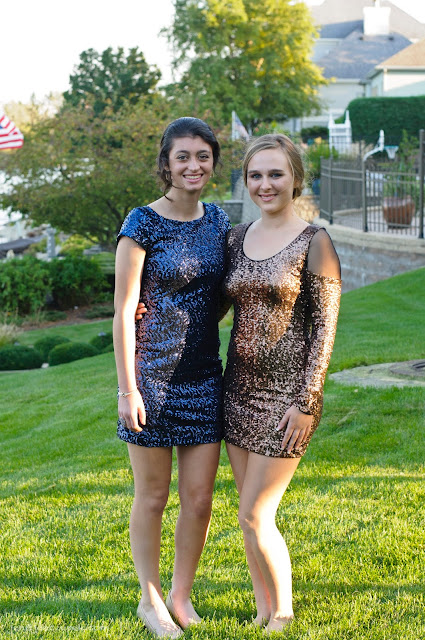 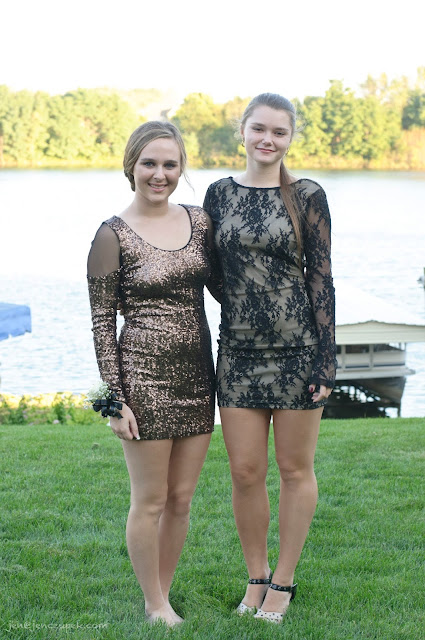 True to form, someone was late. I didn't even have to wonder who it was. The same sweet girl who's been the last to arrive to every picture taking party for the past four years. 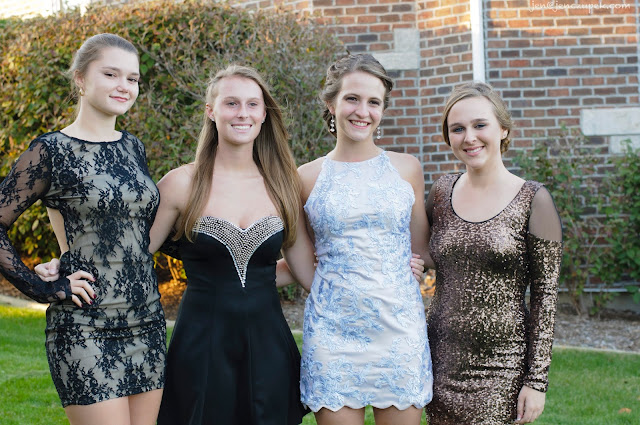 So we snapped more. Unlike the previous three years, this time there were loads of couple pictures and fewer large group photos. Thank the heavens - rounding together that many teenagers is nearly impossible, and at 7:00, every parent was over it. 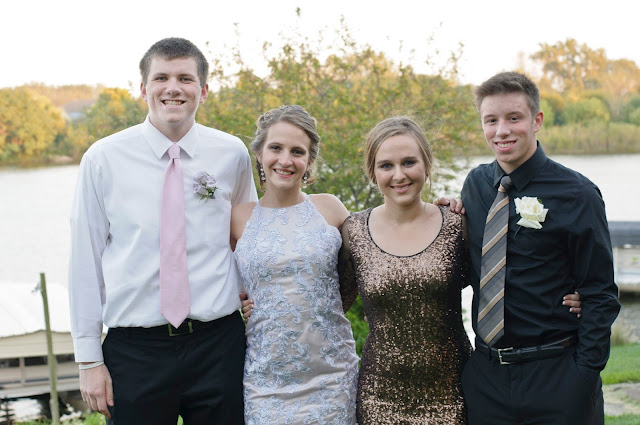 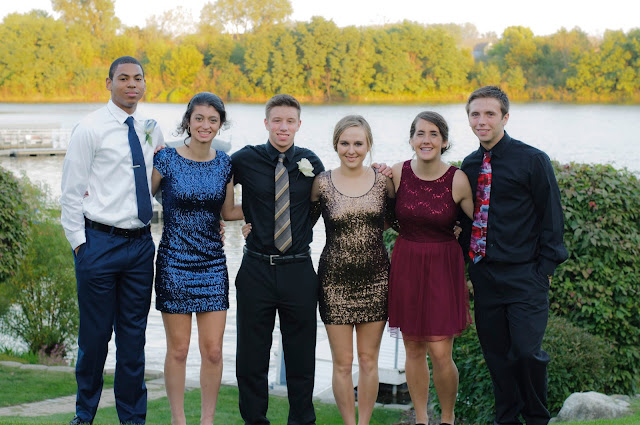 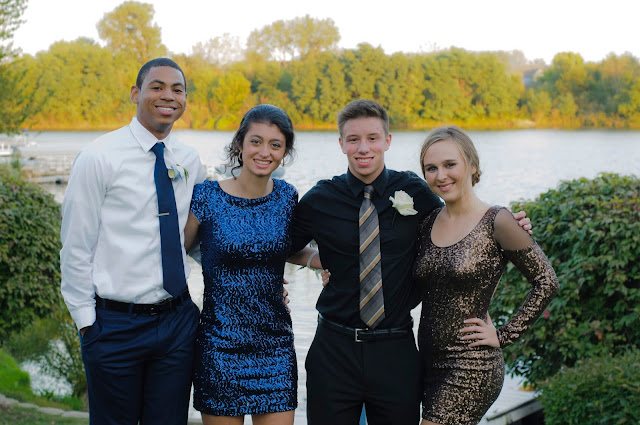 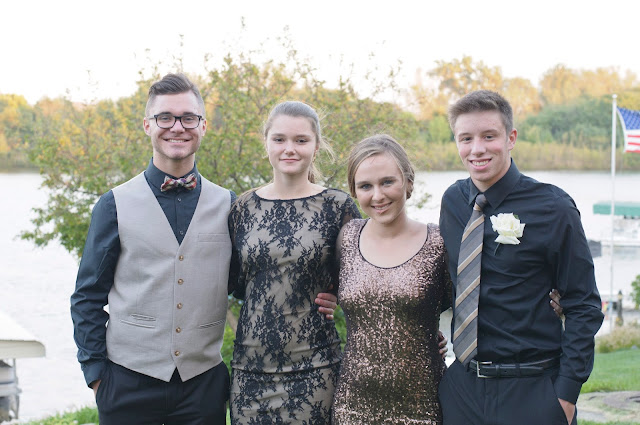 As I walked into the gracious hosts' basement to gather my things and leave, I noticed something else.

Senior homecoming goers behave like mini adults. They huddled in small groups, socializing, enjoying a bite to eat before heading off to the dance. The atmosphere in the room was demure, sophisticated, and resolute with maturity. I specifically remember the agonizing, escalating volume when we hosted pictures three years ago, not to mention glassware that ended up broken on the floor. The difference between fourteen-year-olds and eighteen-year-olds is truly remarkable.

Am I sad that this is my daughter's final homecoming? 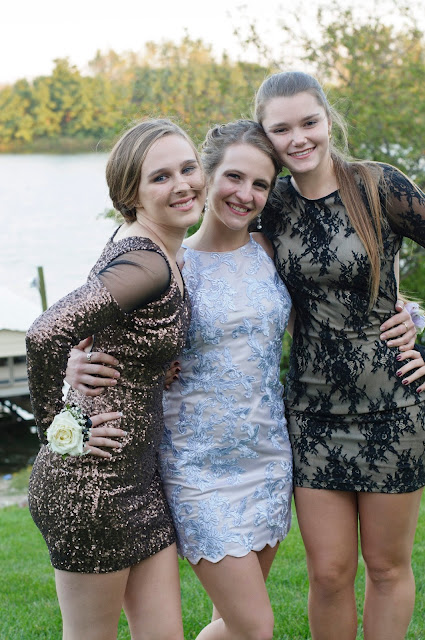 Not really. I get to do it two more times with this one, 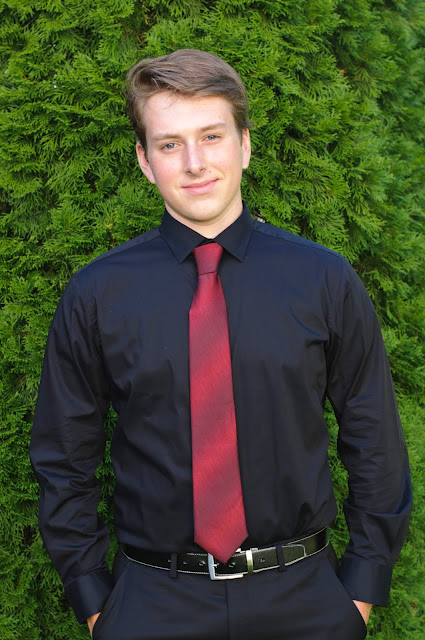 and I will happily stay in back with the other son-moms, remembering when I was the nut job up front, grateful to take a back seat for a couple of years.

To Homecoming Moms everywhere, regardless if you've a son or daughter, I salute you and resolve to put any judgmental sentiments on the back burner. Enjoy the ride. Be bossy and get the perfect pic, if that's your thing. Stand back and watch, if that's where your more comfortable. But also don't be sad if it's the end of the road. Rather, join me in looking forward to what's ahead. Like showing up on the occasional Saturday and joining our kids in the finer art of the football tailgate.

For more blathering about homecoming, check out the 2014 recap here, and my thoughts on hootchie dresses here.

Posted by Jen Czupek at 9:30 AM No comments: