A Laid Back Weekend

A couple of weekends ago I eagerly anticipated a carload's arrival at the cabin. Arriving myself the day before, I immediately went for a long walk to reconnect with the pine scents, scurrying sounds through the brush, and melodic cadences overhead - proof that winter is over in the Northwoods, and with the rapidly melting snow, Spring came in like a lamb. Only to be eaten alive by a vicious lion  baring gnashing, yellow teeth a week later, because they're snow covered again up North.

Knowing that there would be no outdoor snowy activities, I struggled with "what to do" for the weekend. Normally I plan several outings for the winter crew because we all enjoy getting outside and cramming in as much as possible. I felt a bit challenged to come up with something fresh, because "The Thaw" definitely limits the possibilities. Many local businesses close, and the trails were miserable. They were packed in ice, and not everyone had the proper footwear to handle the icy, wet conditions.

My friends assured me that anything we did would be fine. But I stressed a bit - what if it rains all weekend? What if we're stuck inside the entire time?

So I came up with an indoor gift baggie - adult coloring books and pencils - just in case. 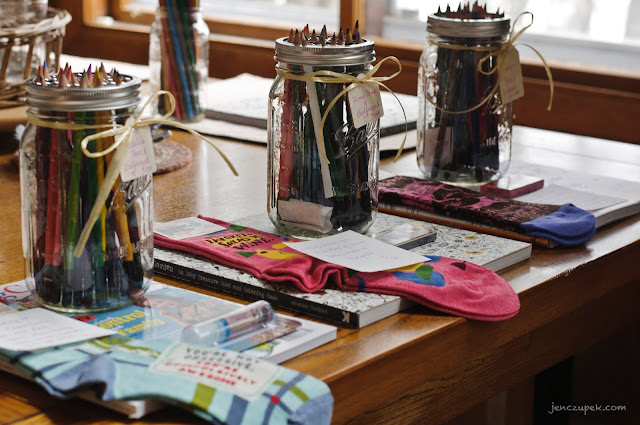 I also wrote several notes for each gal and tucked them inside their jars of pencils, so they can pull one out when the workday sucks the big one and they need a little sunshine in their life. 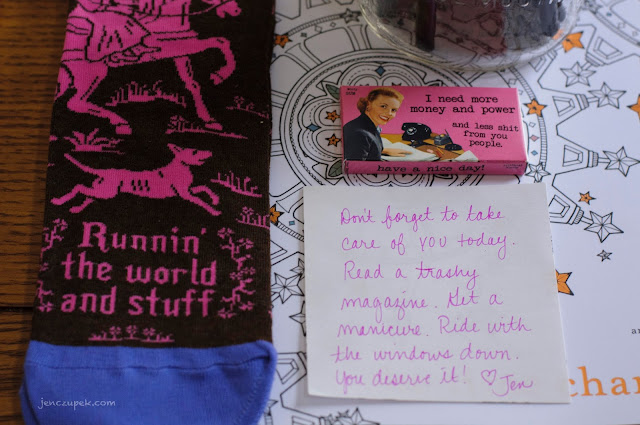 Naturally, I included a bit of snark mixed in with encouragement. 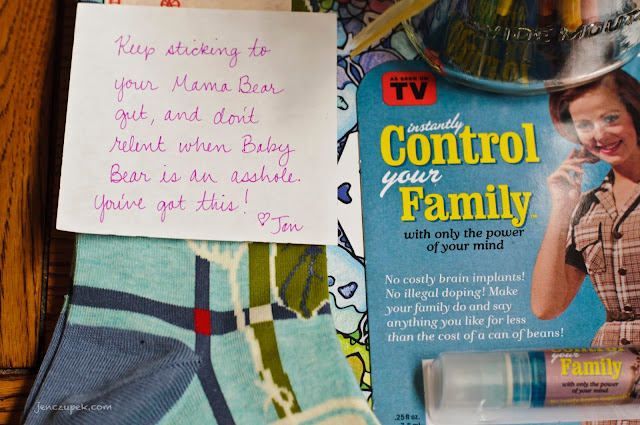 And clearly had to encourage apéritif sipping. 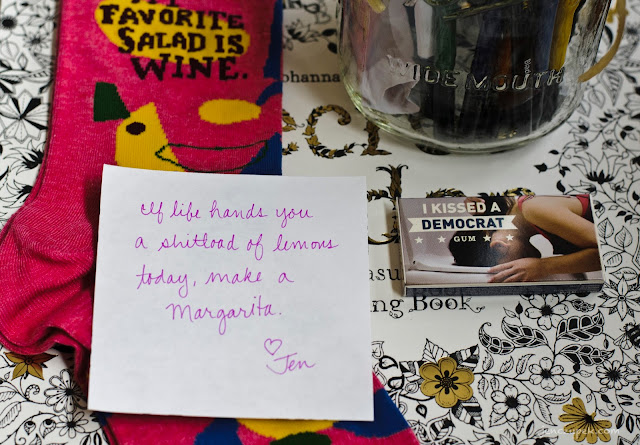 What I love most about these weekends is the feeling. When everyone arrives, it's sheer elation that we're reunited, catching up on our busy lives - more than can ever be said in a phone call or text. While technology is great and allows us to easily communicate more than ever, there's simply no substitute for lingering, face-to-face dialogue. It's how we emote and fully connect with one another. Those important little nuances like the wrinkling of a forehead to make a point, or the squinty eyes with those hard earned laugh lines, requiring years of smiles and giggles?

But after a few hours, we settle in and the initial, elevated heart rates simmer down. Then the really good stuff starts. Done with the mandatory yet important catch up, we settle in to just be with one another. That's where we continue to grow our friendships, as we learn about what we all think about things, where we want to go in life, what our hopes and dreams are for our families, why we keep doing this. Why these three drive TEN HOURS to come do this every year. I'm baffled, humbled, and honored that they drive that far to hang out with me. But most of all, I'm so deeply appreciative that they do it, as my friendship grows exponentially with each one with each passing visit. 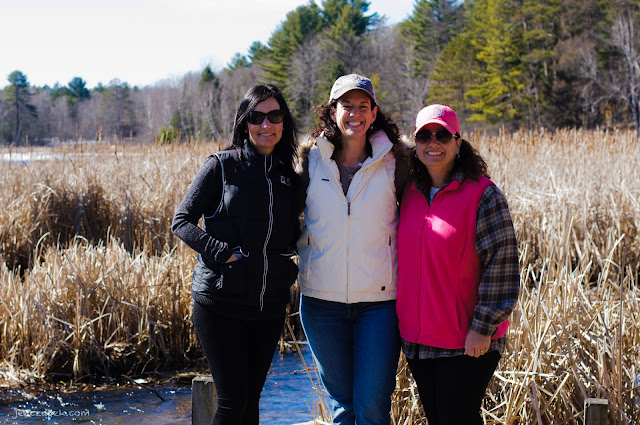 Even though we couldn't do all the fun stuff I might have wanted to, it didn't matter. They told me for weeks leading up that they would all be fine wearing PJs and saying inside for 72 hours straight. Sometimes, it's the mere lack of responsibility and reality that are most enticing. 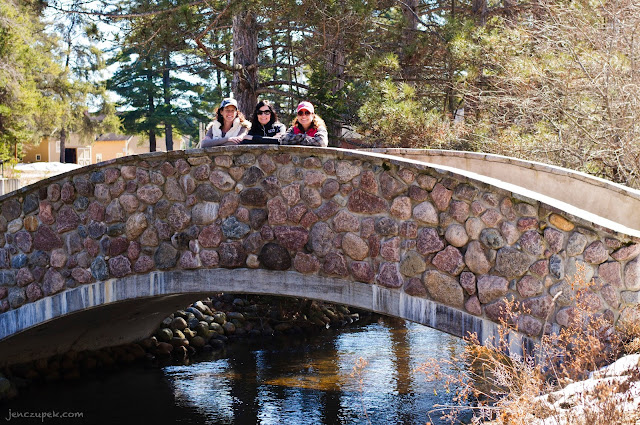 So while the trails were nearly impassable, we simply walked around a fish hatchery and appreciated a cool stone bridge for awhile, just happy to be outside in the sunshine, grateful to be together, and scurried along when the DNR came by and cheerfully told us to leave. 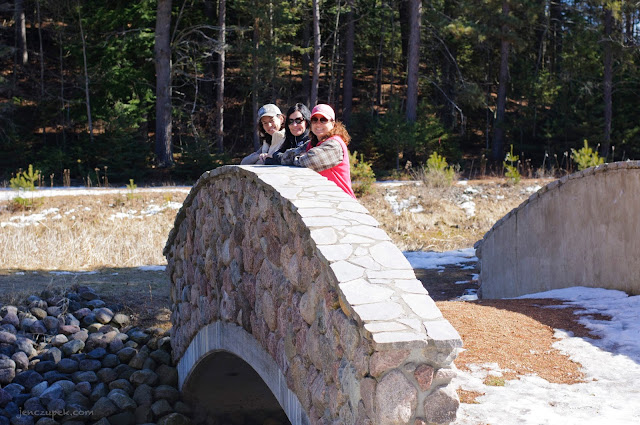 Kind of. He simply introduced himself, delivered a brief overview of the hatchery, told us they're open from May - October, and said to have a good day. His passive aggressive style wasn't lost on us, so we moved along. Besides, other Friday shenanigans awaited. 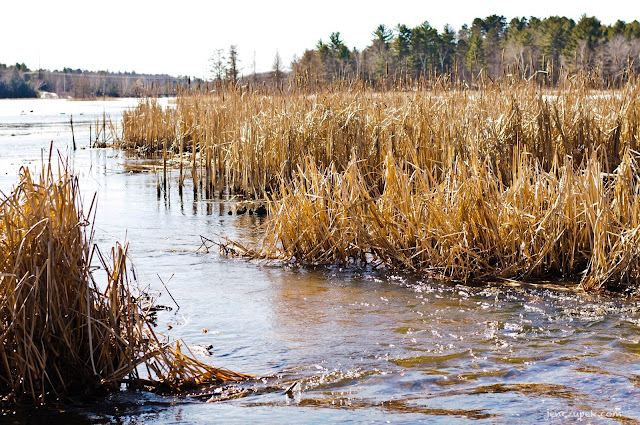 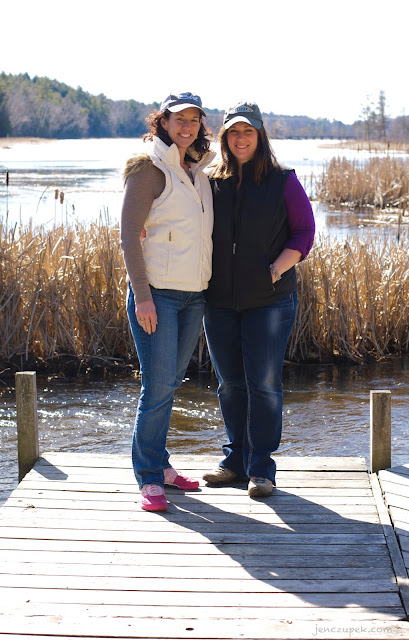 I called ahead to ensure Northern Waters Distillery was open for tasting. Peter entertained us while we sipped his bourbon, flavored moonshines, and vodka. He's got a cranberry vodka coming out soon... swoon! Everyone in our group loved it. I'll be buying a bottle Memorial Day Weekend when it's ready, and will have to put a post-it note on the bottle to remind myself to pace.

We intended to visit a little craft brewery after the distillery, but a scrawled note taped to their window informed they were closed for cleaning - a very common storefront sign this time of year. So instead we pit stopped at the local park for some wine and snacks. We watched daredevil snowmobilers check tip-ups on the lake and local toddlers play on the playground, barefoot.
Meanwhile, the southerners in the group remained bundled up in gloves and blankets. 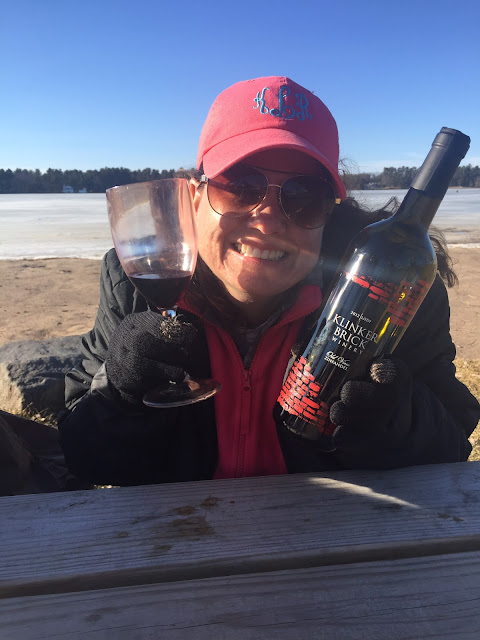 Not ready to call it a day and too early to head out for dinner, we frequented a local watering hole for some warm-up apéritifs and shuffleboard. 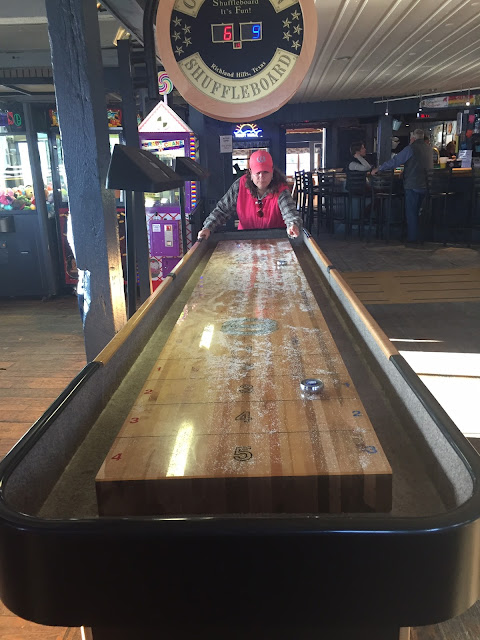 A shuffleboard virgin, my pals quickly showed me the ropes. My partner and I dominated. Perhaps in my shuffle boarding post victory glow, I should have slowed my roll with Mr. Maker's, because promptly after this picture where I can't seem to form a peace sign with my right hand? 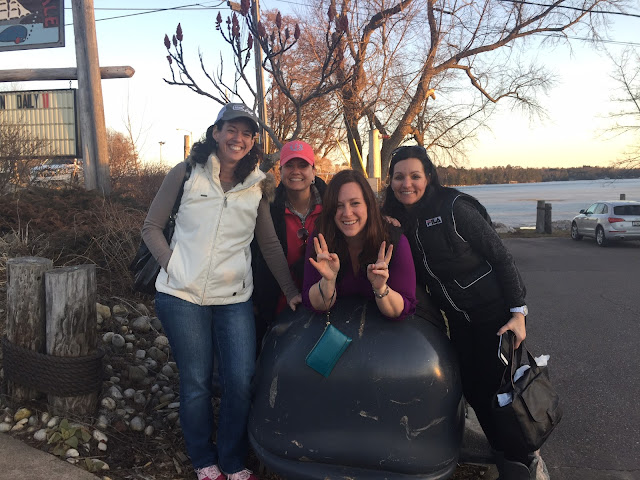 I fell off the retaining wall and ungainly twisted my knee like a pretzel. To the point of limping. It's currently about 99% better, so lesson learned. Don't climb on the backside of The Thirsty Whale.

We finally piled back in the car to head out to dinner, only to find that my restaurant of choice was closed for cleaning. Bummer.

We opted for another Supper Club nearby, and these two were like pigs in poop because they had Grasshoppers on the menu. I chuckle, because this is really kind of like a kiddie drink; in fact, most Wisconsinites probably say their first alcoholic beverage is either a PBR or a Grasshopper at the local dive bar, but it doesn't stop these two from imbibing on dessert before dinner. 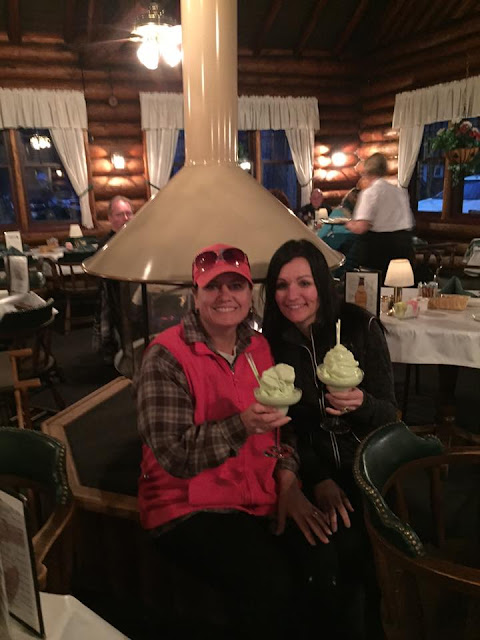 Aside from our Friday outing, that's about all she wrote. Saturday we all failed the shower and make-up test, didn't leave the cabin aside from a little walk down the street, put our feet up by the campfire all day and sipped wine.

In a word, it was perfect.

This was definitely a more chill weekend than those of yore, but it's just what everyone wanted. To relax, recharge, and reconnect. We hit those requirements out of the park.

In a few years our kids will all be grown and we will be entering the next phase of our lives. Will we still make time to run away together? Will we have the same burning itch to get away when our day-to-day responsibilities are (presumably) not as stressful? Will we still all relish in raising a glass just because? 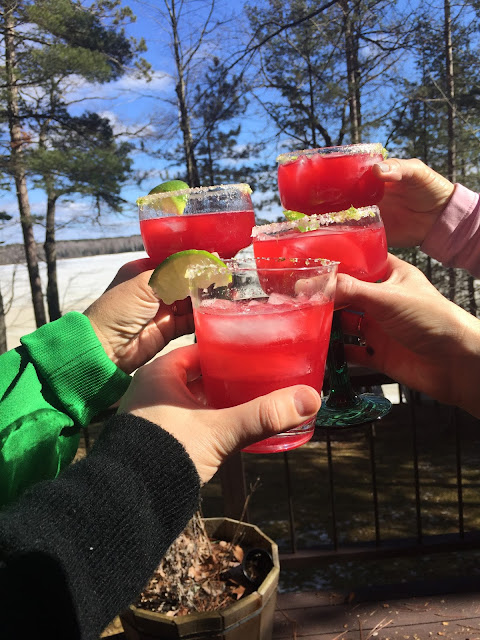 I speak for the group with an emphatic HELL YES. We will do this until we no longer can, because girlfriends are such a close second to family, that they might as well be lumped in. Having no sisters of my own, girlfriends are nothing more than an extended family with which I can't live without.