The Honor Flight - A Guardian's Perspective

On Thursday, September 15, 2016, I flew to Washington, D.C. with the 37th Honor Flight of the Quad Cities as a guardian for two veterans.

The Honor Flight transports American veterans to Washington, D.C. to visit the memorials dedicated to honoring their sacrifices. Priority is given to WWII and Korean veterans, and any veteran with a terminal illness. Vietnam veterans predominately made up the group on this trip for the first time since its inaugural flight in 2008. 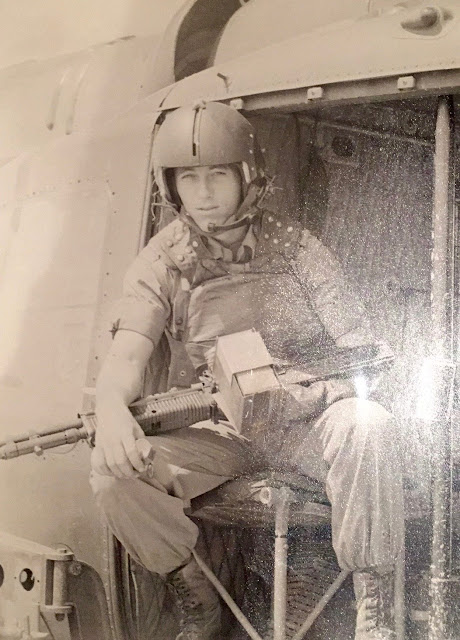 In layman's terms, he managed the aircraft's maintenance and operated as a door gunner. During missions he fired a machine gun out of the open-air door on the side of the helicopter. Per Wikipedia, popular legend holds that "the door gunner on a Vietnam era Huey gunship had a lifespan of five minutes."

Luckily for me, Dad survived 12 months of missions hanging out the side of his Huey.

The events began on Wednesday evening with a pre-flight dinner for the veterans. Upon pulling into the parking lot I knew this would be an evening he wouldn't soon forget, as traffic attendants whisked us to a front row spot, a marching band played patriotic songs while the veterans walked up to the doors, and a sweet woman compassionately greeted my dad and humbly escorted him to dinner. Men and women currently serving in our armed forces saluted him as he walked in.


"This is all for me?" he asked bewilderingly.
"All for you, sir," his escort warmly replied.

I choked back tears. There's something so incredibly respectful about a military salute, especially when it's aimed at your 72 year old terminally ill father, limping into dinner with his wife of 50 years by his side.

Dinner exceeded everyone's expectations. A week before the flight I received notification that I would also be guardian for Jack Bullard, so I immediately coined our little group "Team Jack." Jack B. served in the U.S. Navy from 1960 to 1963, and his job was to chart navigation as his amphibious ship searched out unknown islands in the Pacific, in addition to remaining on standby during the Cuban Missile Crisis.

After reciting the Pledge of Allegiance, listening to our National Anthem (everyone stood) and praying (yes - to God), we enjoyed a hearty midwest meal and a dessert that left the men and women talking the next day about the smorgasbord put before them. Major General Edward Daly provided some kind remarks and thanks to the veterans, and the Bettendorf Concert Choir entertained us with patriotic songs honoring all branches of the armed forces.

It was all very heartfelt and moving. Everyone bid one another good night, and we headed home to rest up for the big day.

That night excitement trumped melatonin. I slept like crap. So did Dad. So did every other veteran I talked to on Thursday, but it didn't stop anyone. Dad and I arrived at 5:00 a.m. to the little Moline airport that buzzed with excitement. News crews set up all over the terminal, and volunteers directed us efficiently through the check-in process. 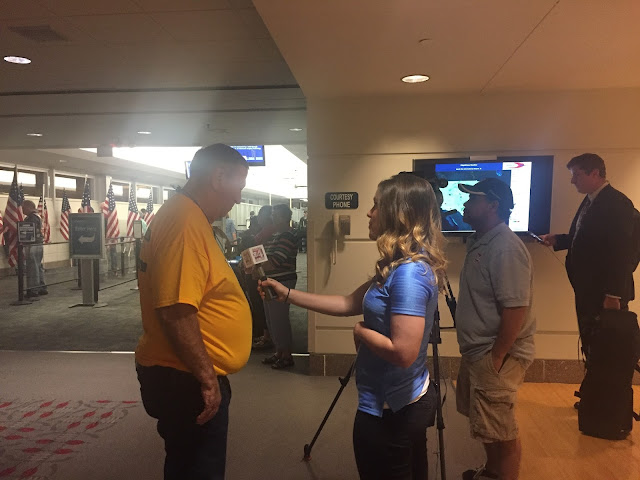 In the check-in line, a spry, bright eyed gentleman stepped up behind me. "HI!" I greeted him, probably a little too enthusiastically. "What's your name?"

"I'm Floyd," he replied with a huge grin, just about to jump out of his shoes in joy. "What's your name?" Floyd trumped me on the gregarious scale. I mean, he was physically oozing 'thrilled to be here' juju.

"I'm Jen. Floyd, thank you for your service."

He hugged me, hard. Then proceeded to tell me that he's a WWII Veteran, couldn't wait for the day to launch, and was so happy to be there. Floyd's daughter also flew as his guardian, and I had the pleasure of meeting her later in the day. Floyd is full of stories about his time spent in Germany. While hanging out at the Air Force Memorial, he told me that he was a corporal in the U.S. Army Air Corps.

I just smiled and nodded, my ignorance evident. People, that's the Air Force before the Air Force existed! Prior to 1941, the Air Force as we know it today was called the Army Air Corps. This man fought in the Second World War in hostile territory so I can sit here today and type words onto a computer screen. So we can all go pay $5 for a crappy cup of coffee at Starbucks. So we may come home at night, kiss our family, and fire up the grill to roast pork chops and sweet corn. 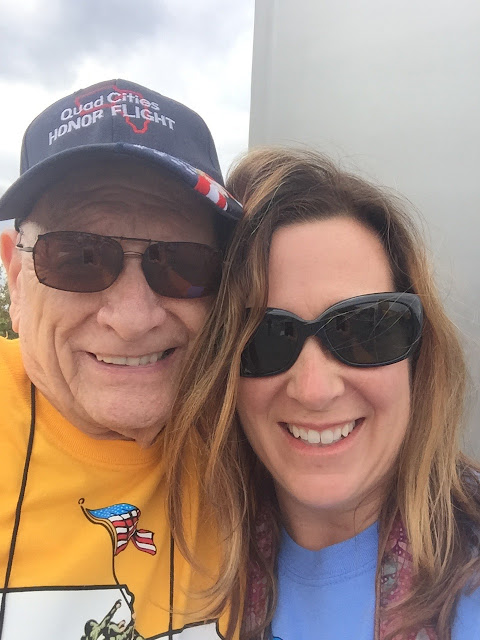 Floyd, thanks again for learning how to fly on a wooden 2x4 from German civilians as they launched you off a mountain on a glider. You're a charmer and I will remember you, your hugs and kisses, and your entertaining stories for the rest of my life.

The efficiency and organization with which this flight is run is remarkable. The volunteers have pre-flight logistics down to a science. We all grouped up accordingly and walked through active military tunnels to the gate, where we enjoyed coffee and donuts before boarding the plane, with additional handshakes and gratitude for service from the active personnel.
Those young men and women in fatigues...they get to me. Emotions soared every time one of them took my dad's hand in theirs, looked deeply into his tired old eyes, and thanked him for his service. How many people - total strangers - stopped to thank Dad when he returned home from Viet Nam? Or Jack B. when he returned from the Pacific? Not many. Not many at all.
The final thank you came from the Major General himself. Clearly every veteran appreciated his words. He made every person feel special - even the guardians. Proof that no matter who you are or what your title is, a little personal thank you goes a long way.
The flight crew thanked the men and women for their service...clearly a common theme for the day but one that never grew old or tiresome. During the flight the guardians sat with veterans other than whom they spent the day with - another brilliant move by the volunteers organizing the event. I sat next to Dennis from Reynolds and Richard from Moline - two Army veterans - and I enjoyed asking them about their service, their current lives, and their families. They both lit up talking about their children and grandchildren.
Once we lifted off the ground and achieved cruising altitude, I remarked to Richard how beautiful our country looks from the air. The fields below, nearly ready for harvest, reflected purple and yellow hues of the rising sun promising a beautiful summer day. We both appreciated the grid-like formations from above. The captain played a familiar tune over the speaker and my throat tightened while the waterworks threatened.

"If tomorrow all the things were gone

I worked for all my life
And I had to start again
With just my children and my wife
I thank my lucky stars
To be living here today
'Cause the flag still stands for freedom
And they can't take that away
And I'm proud to be an American
Where at least I know I'm free
And I won't forget the men who died
Who gave that right to me
And I'd gladly stand up next to you
And defend Her still today
'Cause there ain't no doubt
I love this land
God Bless the U.S.A."

Throughout the day, the veterans received rock star treatment. A police escort through one of the busiest cities in the United States will do that, as will personalized tours through one of our country's greatest museums, volunteers dedicated to making wishes come true, and a bus driver who cracked the best military jokes I've ever heard.

Come back tomorrow for some more reflection about our experience visiting the Smithsonian Air and Space Museum, the Memorials, and Arlington Cemetery. There's much to say about this humbling and life-changing experience.