I love surprises. I fantasize about my lovely husband walking through the door one day, announcing: "Pack a bag, Honey. We're going on a trip."

In my mind, I feign surprise and protest, "But we can't possibly. We haven't planned a thing." With a wink and a devilish smile on his lips, he sets me at ease. "I planned everything. And I'm not going to tell you where we're going. It's a surprise." With that, I race upstairs and pack a bag according to his very vague instructions, (ideally, snowy mountain layers) and hop into a limousine that whisks us off to a newfound adventure.

Being that I do love surprises, I tried to impart my affinity for the unknown in a certain Christmas gift this year. With glee I wrapped two identical tiny gift boxes and placed them under the tree for Mr. Musky and Jake, with strict instructions to open the gifts together. I have this thing I secretly do - I always arrange for the most impactful gift to be opened last. Finally, both boys held their tiny jewelry boxes together and opened them, then took out the little pieces of paper I carefully scribed.

"Congratulations! You are going on a boys trip on April 28th to watch the World Champion Chicago Cubs take on the Red Sox. IN BOSTON!!"

Dead silence greeted my perked ears. Not even a cricket.

Deflated, I immediately backtracked. "Well, I thought it would be nice for you two to have a bonding guys trip. Because when do you ever get to do something alone? And you both have commented multiple times that you want to go to Boston. And see Fenway Park."

Here's the thing - I should know better. While I might like surprises, not everyone else does. Particularly the man who lives and breathes third party logistics every day of his life. For a living, Mr. Musky schedules things. Plans. Makes arrangements. Moves items from point A to point B, with stops in-between if necessary.

Gently, almost sweetly, he asked: "Where will we stay? What if the weather sucks? How do we know this weekend is OK? Jake has tests the next week. How will he study? What if the flights are expensive?" Clearly he has not the romantic notions that I do about unplanned vacations.

"Pfft. Minor details," I retorted, feeling a bit hurt. "We've got months to sort that out. But the baseball tickets! I took care of them!"

A few weeks later, Mr. Musky said while he appreciated the sentiment, he just didn't think April a good time for them to take a trip together. The boys talked it over, and decided Spring Training in March would be be a better trip for them than the weekend before AP testing (no mom of the year award here). Arizona weather would be nicer and more predictable. It would be laid back. A shorter flight. Just...better.

Admittedly, while I thought the idea so unique and would foster ideal male bonding - Cheers! The Freedom Trail! Faneuil Hall! - I had to respect their wishes. My ideal is not the same as theirs, and the important thing was for my men to get away together. It's something I just had in my head that they should do, alone, before Jake graduates high school. So a few weeks ago the boys jetted off to Mesa, while my mom and I kept driving north.

Parent-kid time away is always a good thing, even when you're caught in the middle of still being a kid and a parent at the same time. I've always loved spending time with my mom on little getaways, throwing caution to the wind and being right in the moment. "Hey Mom. Get that phone out and look up reviews for Bublitz. It's a restaurant a few miles away."

Unfortunately, Susie's was likely the worst meal either of us ever consumed. But it left a memorable mark - one that we'll never forget - and a confirmation that condensed soup is never, ever a good idea. Particularly for restaurants who claim "home cooking" as their cornerstone.

We arrived at the cabin in the evening, promptly built a fire, and enjoyed some Maple Old Fashioneds. Highly recommended. We switched to wine, leapt off the Monday night wagon, and frankly? We got shellacked. We drank all the wine and then some, and gabbed until well past midnight about everything and nothing at all. It was divine, until we had to rally in the morning to look at real estate in the area.

It's one of the best and hardest things wrapped all into one - your parents aging. I am so fortunate to have both of my parents still around, but in all honesty, they aren't in the very best of health, and it's hard to see them struggle with that. They're getting to an age where they have to consider options for their future, and it's a difficult decision, particularly for my Mom. Do they stay where they are? Downsize in their local area? Move closer to me? Selfishly, I want them closer so I can help Mom take care of Dad and see them both more often. But I know they have to do what's right for them, regardless of future consequences. If only that crystal ball really did magically project the future.

We looked at several town homes and even spent time with some local construction builders considering the possibility of building a new little woodsy home. Mom came away more confused and uncertain than ever, I think. But at least she knows what's out there in her price range, and it's a good bunch of options to have.

Our final afternoon we put the house hunting aside and went out for some fun. I tempted her with books and caffeine in comfy chairs at my favorite little coffee shop, but Mama wanted to get lost in the woods. I fall very close to the apple tree.

We set out on what I call the Chickadee Trail, uncertain of the conditions as the great snow melt of 2017 was in full force. It's a semi-groomed trail, so the snow and ice were really packed in but thanks to a warmup for the past few days, the top layer was slushy enough for our hiking boots to grab hold. 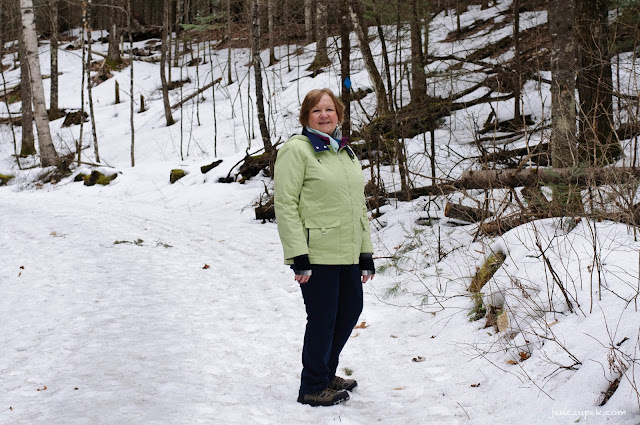 We enjoyed hearing twitters in the woods and more birds than normal. Things were definitely waking up, and we enjoyed moderate temperatures for our walk.

Having a knee replacement less than six months ago, I wasn't sure if Mom would be able to handle the trail. I carried a soccer chair for her just in case, and she found her own extra support aid along the way. 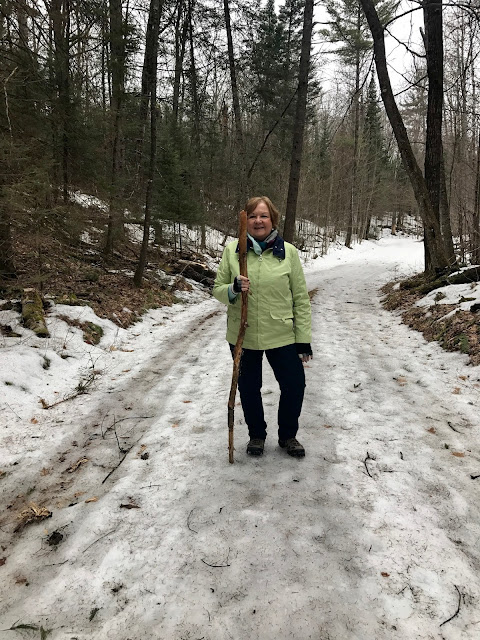 We walked for about a mile and a half then finally arrived to one of my most favorite spots on earth... 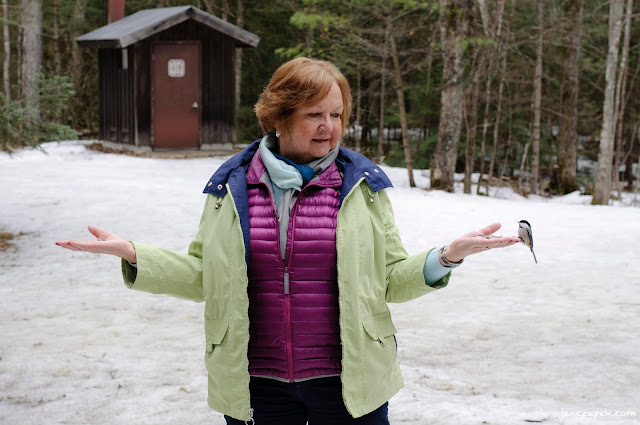 ...and Mom joined the Chickadee Club.This time we had some extra entertainment. 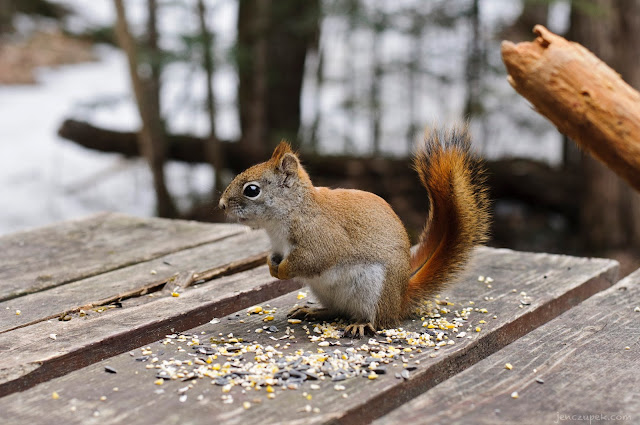 The red squirrels were out in full force, and they are not afraid of a bunch of sweet birds when it comes to filling the ole pie holes. 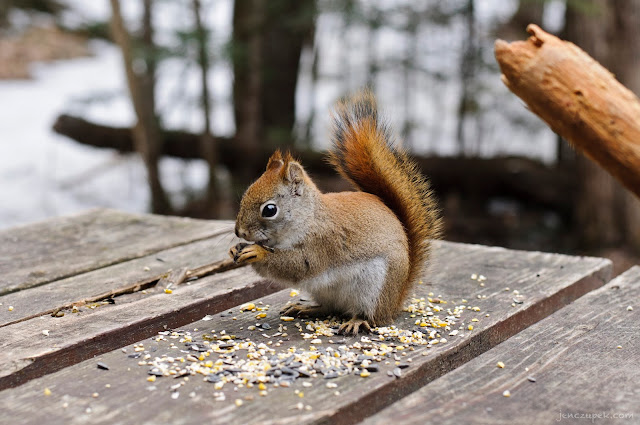 Red squirrels are aggressive, and can border on downright mean. Once Mr. Musky and I dragged up a giant trampoline float from the lake to the garage, and a red squirrel kept charging us. That mean little  sucker freaked me out - I was convinced he wanted to race up my leg and go for a ride on my head. So I ran away leaving my poor man to struggle up the hill himself with the heavy, awkward float.

These squirrels were fine as long as I fed them, so I plopped piles of birdseed around. 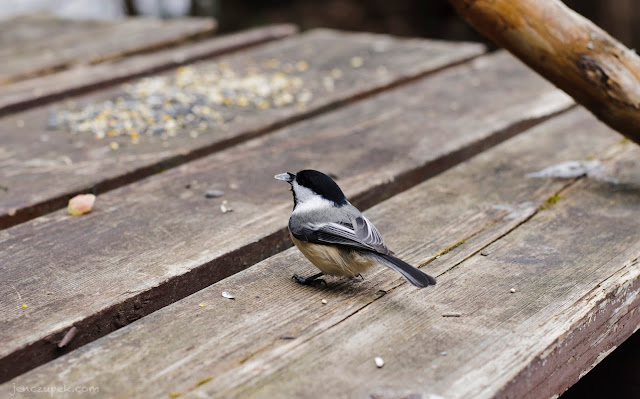 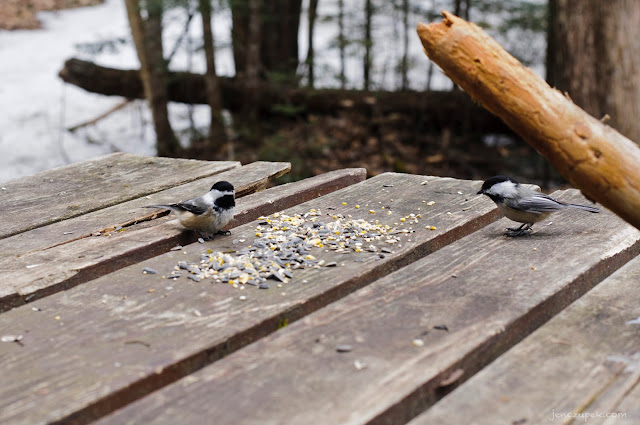 And my little friends make the best selfie accessory. Period. 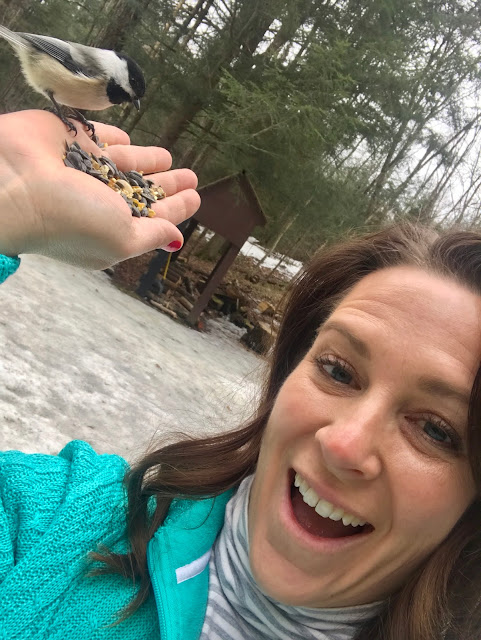 As we sipped our wine and snacked on cheese and apples, Mom and I watched our tabletop entertainment and talked some more. About what? 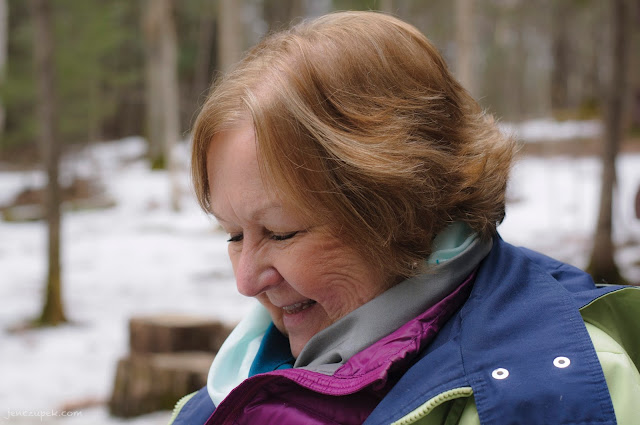 I can't tell you. Because knowing us, it was likely nothing important. But we had fun and I'll always remember my little date with her in the woods. 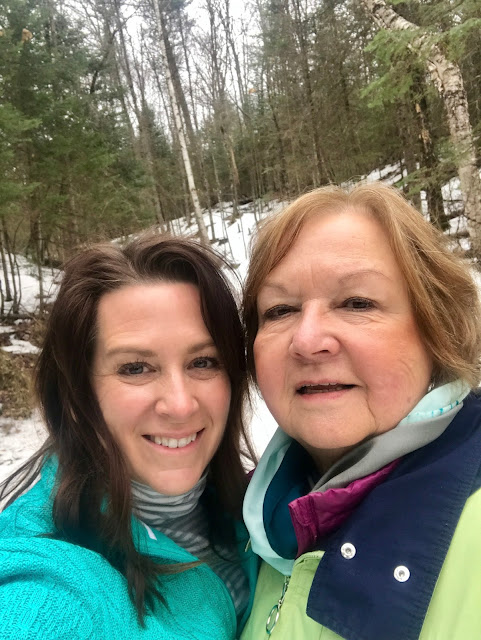 Starting with Susie's, we struck out on most of our dining experiences for the week. We tried a restaurant in Rhinelander on night two, and the following sign greeted us:

"Closed for the night due to employees calling in."

We rolled in laughter. Because the temperature soared to 70 degrees that day - the first true warm day of the year - the entire staff called in sick so the restaurant had to close. That would fall under the category, "Only in the Northwoods..."

But luckily we struck gold post hike at a new little restaurant in Eagle River called Catch 22. Local folks, I highly recommend this gem. And that's something coming from me, because I'm downright picky when it comes to eating out. But this place is doing it right.

I picked the boys up that Friday and enjoyed reuniting with them, hearing about their little stories and adventures. Kyle Schwarber slapped Mr. Musky's hand on a walk-by but passed Jake up. He's still complaining about it. They enjoyed the desert warmth, baseball, good meals, and time with Uncle Bob at his country club. All in all, it was a successful trip and the bonding seems complete.

I hope this finds you all enjoying your own version of spring, trips or no. I love the 70 degree days as much as I do the overcast, rainy ones. The door is currently open and a storm just rolled through, and the rain gently continues to fall. It reminds me of my big brother, who loves midwest storms and misses them despite the heavy rains seen in Northern California this year.

I just miss my brother.

Cheers to you all. Thanks for reading, and Happy Humpday.